It may be nearly 60 years old, but this 250 GT Competizione still impresses with its speed, sound and soul. 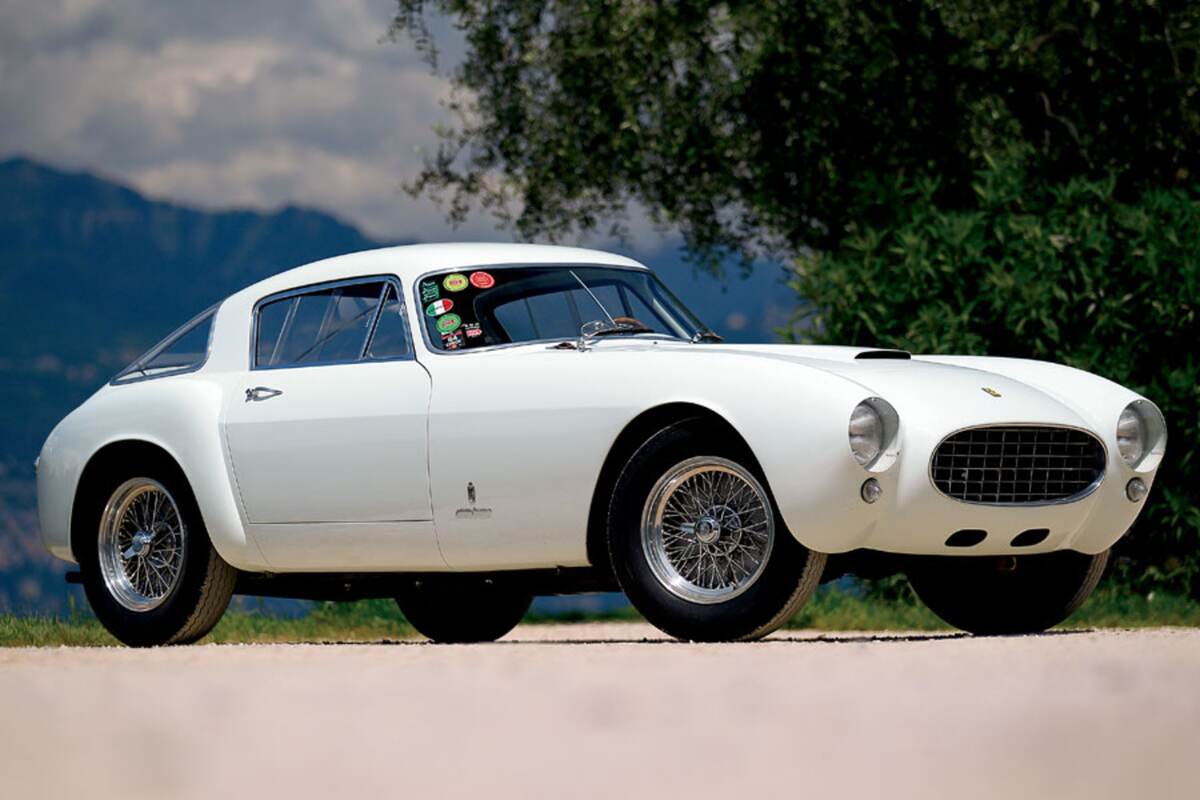 Just look at this compact, well-proportioned, simple yet beautiful Pinin Farina-bodied coupe. Its lightweight aluminum skin is stretched so tightly over its tubular steel chassis that it fairly pings when you touch it. The front fenders are largely unadorned, save for a clear boneline that runs from the top of the front wheel arch to the trailing edge of the doors. The rear fenders are more aggressively haunched, with muscular, flowing shoulders. The rear end is mostly feature-free, and while there is a recessed provision for a license plate, that’s hardly this 1955 Ferrari 250 GT’s purpose; there could be little question that this is anything but a race car.

Witness the lack of bumpers, lavish chrome trim or other such accoutrements. Exterior lighting is spare. A small hood scoop feeds a trio of unfiltered Weber carburetors, while a pair of openings just below the main grille aid engine cooling. An aluminum quick-fill fuel cap sits near the middle of the rear deck, which does not open to allow access to the space behind the seats.

The car’s cabin is equally purposeful. The all-metal dash is painted body color and wears no padding or upholstery. (My eye is drawn to the unusual left-right bat-switch-style turn signal mounted in the center of the dash, an always-amusing touch found in many early Ferraris). The door panels are trimmed in leather, and leather pulls open the doors from the inside. The steering wheel, with its polished-and-drilled aluminum frame and wood rim, would be considered a luxury touch today, but it was simply business as usual for a European racing car in the mid-1950s. 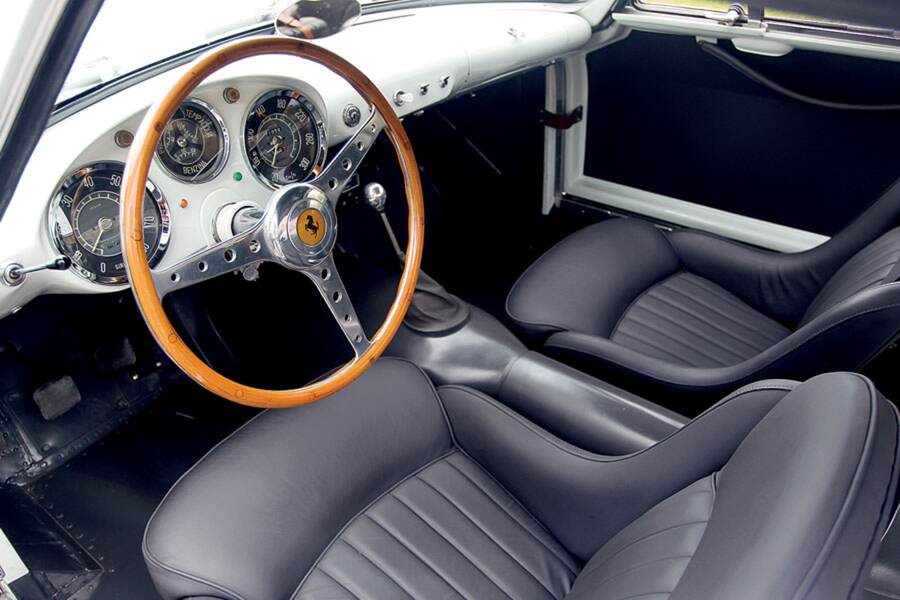 Carpeting? For what? Most of the rest of the cabin’s riveted metal panels are painted a business-like satin gray. Dropping into the low-back seat reveals brake and clutch pedals sprouting from the floor on small stalks, along with an ungated shifter topped with an aluminum knob. The seats are trimmed in a soft, matte black leather, although it’s likely the original hide would have been a bit firmer and shinier.

Much more important: This thing is loud! Turn the key, thumb the starter and the edgy Gioacchino Colombo-designed 3-liter V12 engine lights with a frenzy of exhaust, intake sucking sounds and lots of cam, timing chain and valvetrain noise. It pops and sputters a bit as the fluids warm, but shows good manners from the start—although docile isn’t a term you’d apply to this car.

I’m dying to get a taste of this Ferrari’s performance. But first: What exactly is this tidy Faberge Egg of an early competition car? 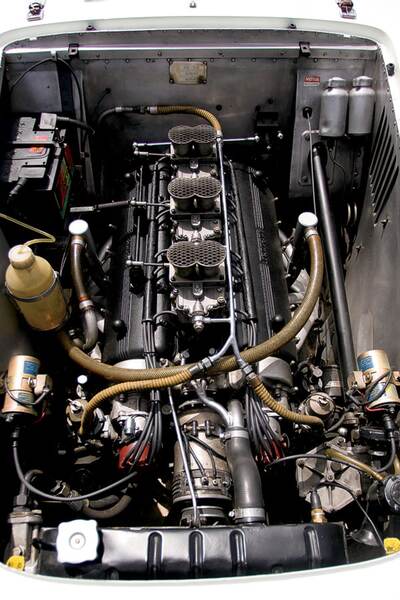 THE SHORT ANSWER IS THAT s/n 0415GT is a 250 GT Competizione, specifically a Tipo 361, and it’s one of the first ten 250 GTs built. It shares much of its chassis architecture with the more luxuriously finished and trimmed 250 Europa GT road car, while its engine specification is very close to that of a 250 MM. The MM connection continues with that fabulous styling, which graced a handful of 250 and 375 MMs. Two or three other 250 GT Competiziones also wear such bodywork, although their chassis and coachwork vary slightly. As was the case with Ferraris of the era, no two are exactly the same.

A look underneath reveals the expected beefy chassis tubes, servo-assisted four-wheel drum brakes, a live rear axle with semi-elliptical leaf springs and coil-sprung wishbones up front. There’s a Borrani wire wheel at each corner, of course, and the traditional dual quad exhaust outlets at the rear. However, there are no resonators aft and no baffling in those racy tips; it’s no wonder the V12 is loud.

S/n 0415’s Tipo 112 2,953cc SOHC engine produces somewhere between 230 and 240 horsepower, thanks in part to its racing-profile camshafts and trio of Weber 36 DCL carbs. The now-iconic powerplant is backed by a fully synchronized, four-speed manual gearbox. 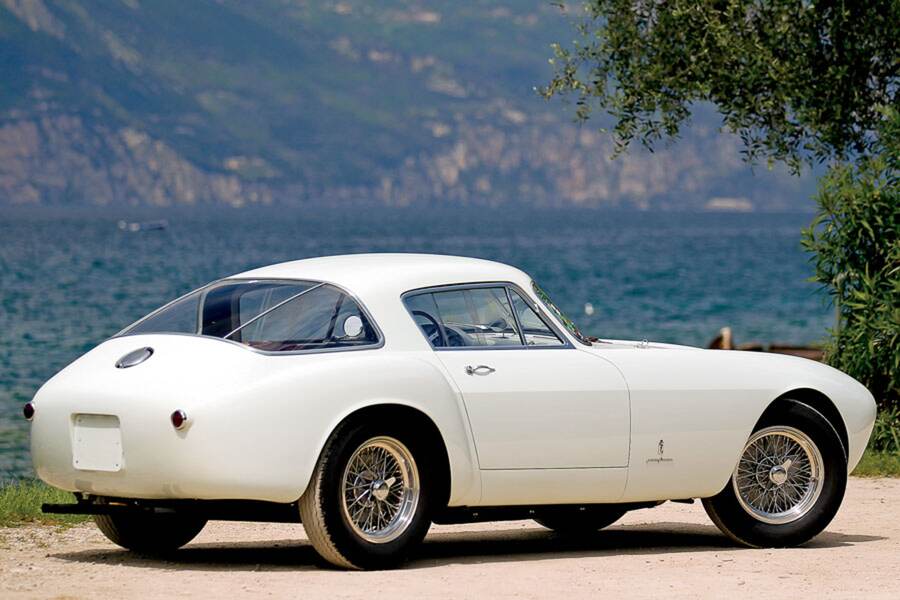 This tidy package was very successful in competition; 250 GTs of various stripes went on to dominate road-racing across Europe. In 1957, for example, Olivier Gendebien and Jacques Wascher took the overall win at the 1957 Tour of Sicily in a very similar 250 GT Tour de France (s/n 0677GT). That same lineup finished third at the star-crossed ’57 Mille Miglia, which claimed the life of s/n 0415’s famous, and somewhat infamous, first owner: Alfonso de Portago.

Alfonso Antonio Vicente Eduardo Angel Blas Francisco de Borja Cabeza de Vaca y Leighton, the 17th Marquis of Portago, was born in London in 1928 and raised primarily in Biarritz, France. The aristocratically titled, wealthy, somewhat cultured, ruggedly handsome (Enzo Ferrari apparently once described him as a “magnificent brute”) “Fon” was a natural athlete, and, like so many others of his generation and breeding, duly found his way into motorsport, aviation, boating and women—not necessarily in that order. Portago had a particular affinity for Ferraris; he purchased s/n 0415 new, but for a variety of reasons only raced it once. At the Nassau Speed Weeks in 1955, Portago drove the Ferrari to a credible fourth-place overall in the five-lap Over-2000cc production race, finishing behind a trio of Jaguar D-Types. (While in Nassau, he also piloted a 750 Monza to victory in the five-lap Ferrari-only race and the Governor’s Trophy race, and to second place in the Nassau Trophy main.)

In addition to buying Ferraris, Portago also raced for the factory team, in both sports and Grand Prix cars. By May ’57, Enzo Ferrari asked him to drive a 335S in the Mille Miglia. While Portago was a skilled pilota, he was also known for racing with more abandon than discipline, and the 335 was a fearsomely powerful and demanding machine. What caused the 150-mph accident near Carviana, about 50 miles from Brescia, where the race began and ended, will never be known. The popular story is that a tire failed, but some suspect the Ferrari was simply too much for its driver. Whatever the case, the 28-year-old Portago, co-driver Edmund Nelson and ten spectators died in that horrific accident—and, as a result, so did the original Mille Miglia. 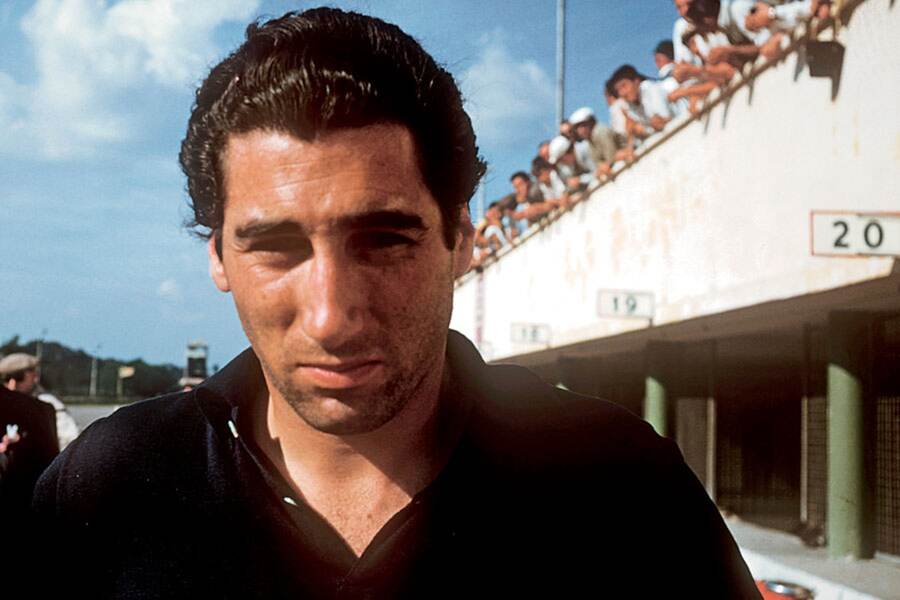 BY THAT TIME, Portago had long since walked away from s/n 0415, which over the next few years moved from owners Chuch Hassan to Dick Beach and, in 1963, David Fenton. The Ferrari was later stolen from Fenton, and while he recovered the car, its engine remained missing. No problem: He fitted a V8 engine and motored on.

Fenton sold the car in 1974, and after a few more owners (one of whom re-installed a proper Ferrari V12), s/n 0415 moved to Germany, where its next two owners showed and drove it in historic events. In early 2008, the Ferrari was fully restored by Ferrari Classiche; later that year, the original engine block was discovered, though it has not yet been fitted to the car.

Irrespective of its first owner or history, s/n 0415 is a fascinating car in its own right. My only disappointment? I’m not allowed to drive it. 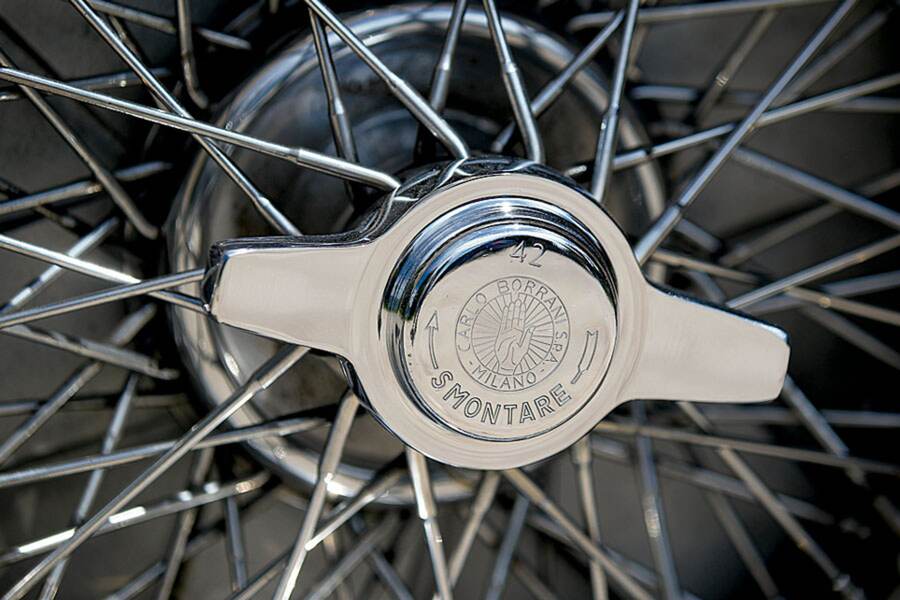 As reported in this issue’s “Auctions” (which starts on page 12), this 250 GT sold in Monterey for a gob-smacking $7.2 million. I rendezvous with the car a few days before it crosses the block, and insurance and consigner requirements mandate that I maintain station in the passenger seat. So, as much as I want to take the wheel, I instead rely on Paul Hageman, an automotive specialist with auction house Gooding & Co., to give me some flavor of this fantastic Ferrari.

Hageman drives slowly at first to further warm the car’s vital fluids, but even this gentle use significantly raises the engine’s decibels. There’s precious little sound deadening—if any—in the engine compartment, bodywork, floorpan and cabin. With everything up to temperature, Hageman gets on it, hard, and the cockpit fills with a wonderfully raucous symphony of intake roar, valvetrain noise, transmission whine and exhaust shriek.

Furthermore, those 230-odd cavallini aren’t just loud; they’re strong. S/n 0415 remains legitimately fast, even by today’s standards. The engine’s response is crisp and cammy yet smooth and tractable. It winds up fast, and the aural assault is unrelenting. This one has clearly been tuned and set up just right; when a 3.0-liter Ferrari V12 is running properly with everything on song, there’s little that can match it. 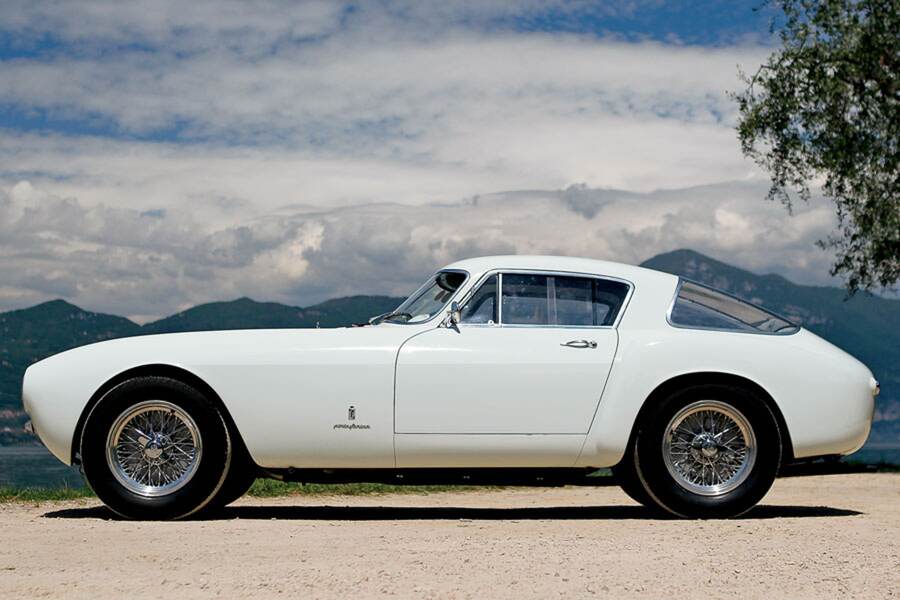 S/n 0415’s ride quality is better than I expect. You’d never call it plush or luxurious, but the anticipated “leaf-sprung race car” punishment just isn’t there. Also impressive is the airy cabin. Even though the side windows are relatively short vertically, the sweeping windshield and three-piece rear glass offer excellent outward visibility.

From the passenger’s seat, anyway, this Ferrari feels wonderfully crisp, balanced, well-mannered and comfortable. It seems like the perfect companion for the vintage rallies (e.g., the California Mille, Copperstate 1000, Colorado Grand or Mille Miglia Storica) that cars like this are so often used for—with the proviso that ear muffs or intercom headphones would be a must. But that would be a modest price to pay for the experience of piloting this fantastic piece of Ferrari history in the manner which Enzo, or perhaps Portago, intended.