There’s more to the NART Spyder story than the ten famous 275 GTS/4s; this 365 is another, little-known chapter. 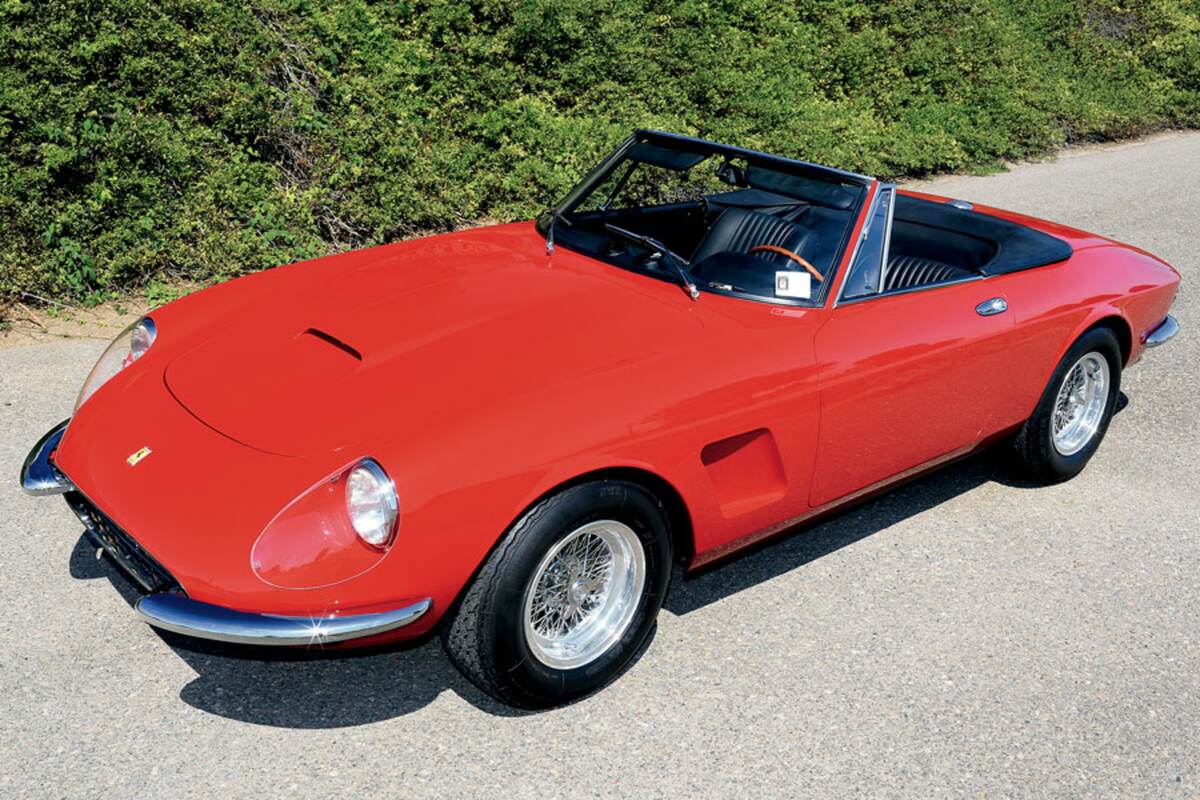 At the end of the 1960s, Ferrari manufactured roughly 168 examples of the 365 GTC, the grand touring coupe being a mechanically upgraded and cosmetically almost-unaltered version of the preceding 330 GTC. The company also built a Spyder version of the model that was produced in far fewer numbers; just 20 such 365 GTSs rolled out of Maranello.

As keen-eyed readers will note, our featured 365 is not one of those 20. Its dimensions and proportions are familiar, but oddly foreign. We’ve seen the badges and design features before, but never in such a combination. To the well-versed vintage Ferrari connoisseur, Harry Gibson’s 1969 365 GT NART Spider (s/n 12181) defies categorization and begs questions—and then invites fascination.

As the nomenclature implies, this Ferrari’s most significant feature may be the yellow badge on its tail, which suggests the undeniable cachet of being connected to Luigi Chinetti’s famed North American Racing Team. But while the history books are rife with tales of the ten factory-built 275 GTB/4-based NART Spyders, and a few recount Chinetti’s conversion of three 365 GTB/4s into Michelotti-bodied Spyders during the mid-1970s, one would be hard-pressed to locate any history that mentions a NART car built on a 365 GTC platform. 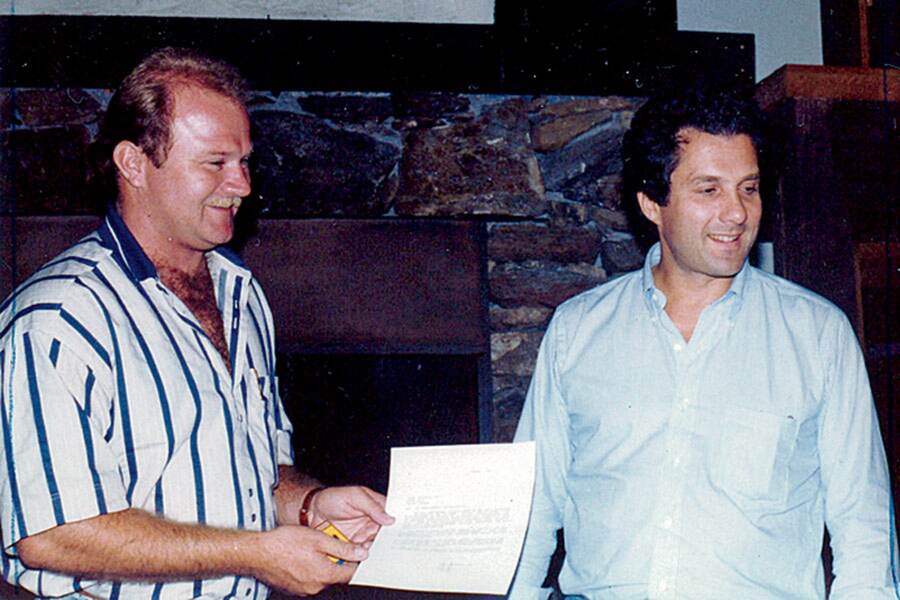 To answer the mystery, Gibson proudly keeps a laminated copy of an original letter written by Luigi Chinetti, Jr. in 1987. In describing the car’s design brief and purpose, Chinetti, Jr. writes, “The 365 NART Spider project began “in the early seventies,” and chassis number 12181 “was purchased and studied in an attempt to incorporate many of the body modifications Pininfarina have [sic] used till that time.”

“I always wanted to make a [365 GTS] Spider differently from what you saw coming out of the factory,” Chinetti, Jr. said in a recent interview. “The car was fun to do because of the look. It came out really nicely, especially the front, which is exactly what they [the Ferrari factory] should have done, themselves, for the convertible.”

CHINETTI BUILT THE 365 GT NART Spider at his shop, and there’s no question that his interpretation has a far sportier nose than the more restrained front end originally penned by Pininfarina. The recessed headlamps are now covered in Ferrari’s classic racing style. Circular brake-duct openings were added underneath the front bumpers. Hot air exits from huge vents behind the front wheels, the same location as on the earlier 330 GTC. (One of the factory’s few cosmetic tweaks to the 365 was to relocate those cooling vents to the hood.) Chinetti also added a central, twin-nostril scoop that now feeds six Weber carburetors. Gibson, in consultation with Chinetti, replaced the Ferrari’s standard three-carb setup after he took delivery of the car. 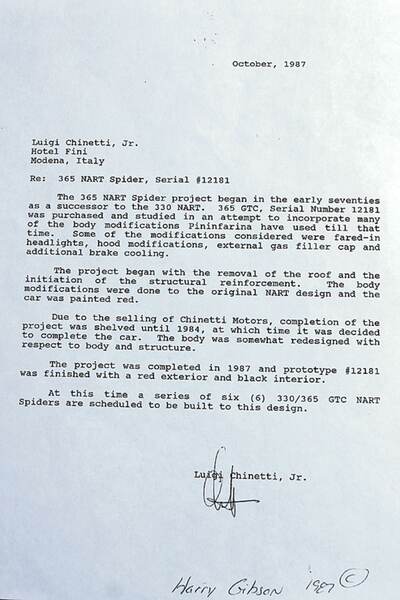 From the rear, the 365 GT NART looks much the same as the Pininfarina-designed GTS, aside from the centrally located competition-style fuel filler; the original sat underneath a body-color door on the fender. This wasn’t a simple alteration, as the rear deck lid had to be shortened to make room.

Other, more modest cosmetic tweaks include the replacement of the GTC’s protruding push-button door handles for the far sleeker, hinged releases from a 365 GT 2+2. On the whole, the 365 GT NART Spider appears longer and more streamlined than a 365 GTS.

For Chinetti, the 365 GT NART Spider is but one chapter in an ongoing saga of his family re-bodying Ferraris. He also converted at least one 365 GTC/4 into a Spider, which he remembers with particular fondness, and Gibson recalls that, during his tour of Chinetti Motors, he was shown two 365 GT 2+2 “Queen Mothers” that were being considered for convertible conversion. As the former racing driver and erstwhile designer nostalgically recalls, “We always liked making special cars; Dad liked it, and I liked it.” 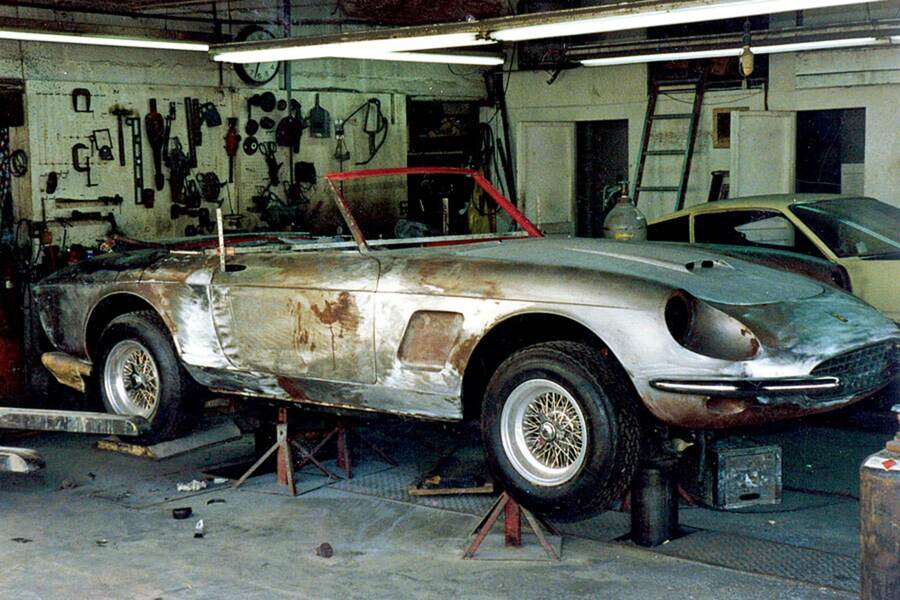 About that name: Did the 365 GT NART Spider ever race? “Oh, God, no,” exclaims Chinetti in half amusement, half exaggerated disgust, pointing out that the 365 would not have been competitive as a racing car even when new. “It began as a contemporary car and ended up as an antique,” he concludes of the long-running project, which began in the early 1970s, then was shelved for several years following the sale of Chinetti Motors, before being resumed in the early ’80s. It’s not remembered exactly what happened to the car in the interim, although it did suffer a minor interior fire sometime before work was completed.

If you’re wondering why the starting point was a GTC rather than a GTS, the reason is simple economics. While it was more work to remove the coupe’s roof and reinforce its frame, convertibles were both far harder to come by and much more expensive, reducing the potential profit of building such a car.

However, Chinetti adds, it’s not like 365 GTCs were in great demand at the time. The foundations of many of his projects were not particularly desirable when he received them. “It’s }like when I went racing,” he explains. “I got the hand-me-downs. People say, ‘You were lucky to race a 275 LM.’ Well, yes, but it was the only race car we had. People look at you like you’re out of your mind, but I certainly wasn’t about to go out and buy a new race car.” 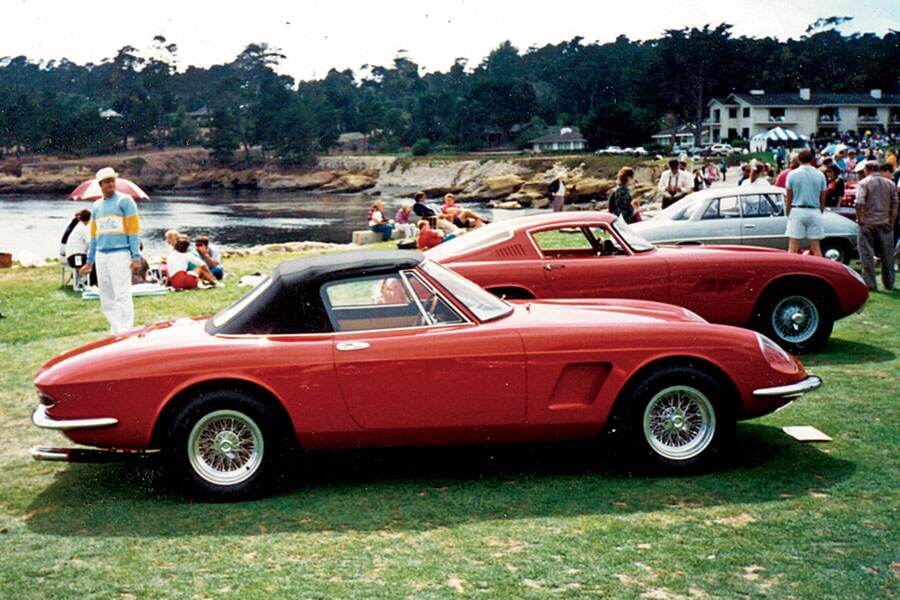 GIBSON, A COLLECTOR FROM FOUNTAIN VALLEY, California who has owned a number of vintage Ferraris, “was introduced to the 365 GT NART Spider through a Ferrari-collecting brother-in-law, who wanted a co-investor in the car. Said relative eventually dropped out of the deal, but Gibson decided to go ahead. When he flew to Chinetti Motors in 1987 to pick up the car and pay off the balance, he had only seen it in pictures—but that was enough.

“I really liked what they had there, and the designs that Luigi had put in, like that front end with the covered headlights, the hood scoop and bringing the vent on the 365 back down to the side,” recalls Gibson.

He soon turned over the Ferrari to his friend and automotive mentor, the late Bill De Carr, who is fondly remembered in both hot rodding and Italian motoring circles for his precision body work. De Carr refinished the paint and cleaned up some of the panel fit, as the car was slightly damaged during transit to California. “Bill was like another father to me,” Gibson confides. “He had a real gift for metal.” 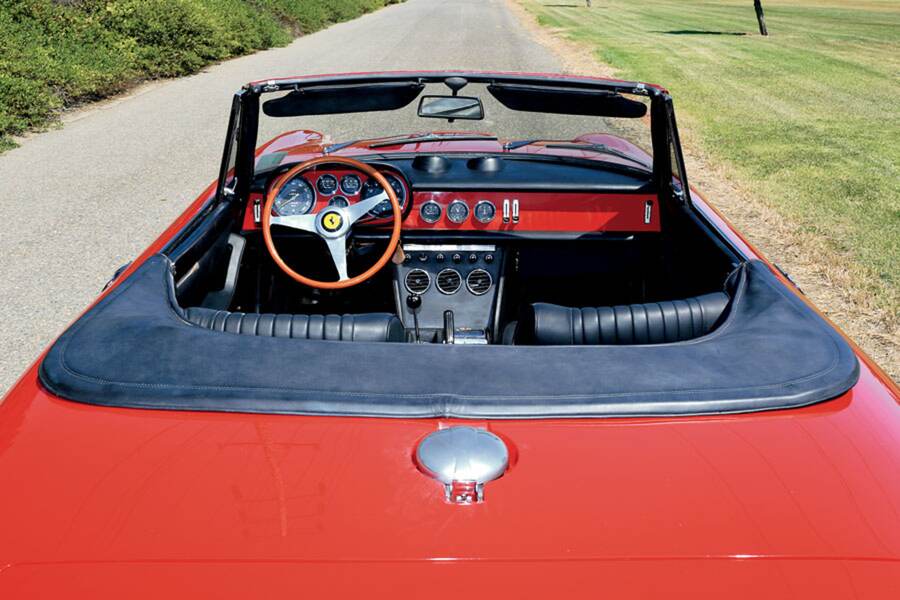 In 1990, De Carr managed to get the Ferrari invited to the Pebble Beach Concours d’Elegance. There, the 365 GT NART Spider was shown in an elite class dedicated to Special Italian Coachwork from 1958-1969; other entries included a Ghia-bodied DeTomaso Vallelunga Competition Coupe and one of the Scaglietti-bodied Corvette Italias. Although displayed for exhibition only, the 365 nonetheless caught the attention of the judges. Gibson recounts that a judge approached him on the field to say that they wished to present the Spider with a special award in tandem with one of the class winners. Gibson was thrilled; unfortunately the award never quite came to be.

When he was invited to join the lineup on Pebble’s legendary awards platform, Gibson discovered, to his great horror, that the Spider would not go into gear. A nut connecting the shift linkage to the transaxle had slipped off, rendering the car temporarily immobile—thus ending its eligibility for an award, since drivability of the winners is an essential criterion. The class win Gibson received at the Santa Barbara concours a month later was a nice consolation prize, but certainly not the honor that Pebble would have bestowed on the car.

Soon thereafter, the 365 GT NART Spider was garaged and rarely saw the light of day, largely remaining out of public view for over 20 years. In recent years, however, Gibson, an affable and soft-spoken fellow who generally eschews the spotlight, has brought the car back into the sunshine. In 2012, for instance, he drove the Ferrari in the FCA’s 50th Anniversary rally over the Golden Gate Bridge and entered it in the Danville, California concours. So far this year, he’s shown it at the Dana Point concours in Southern California. 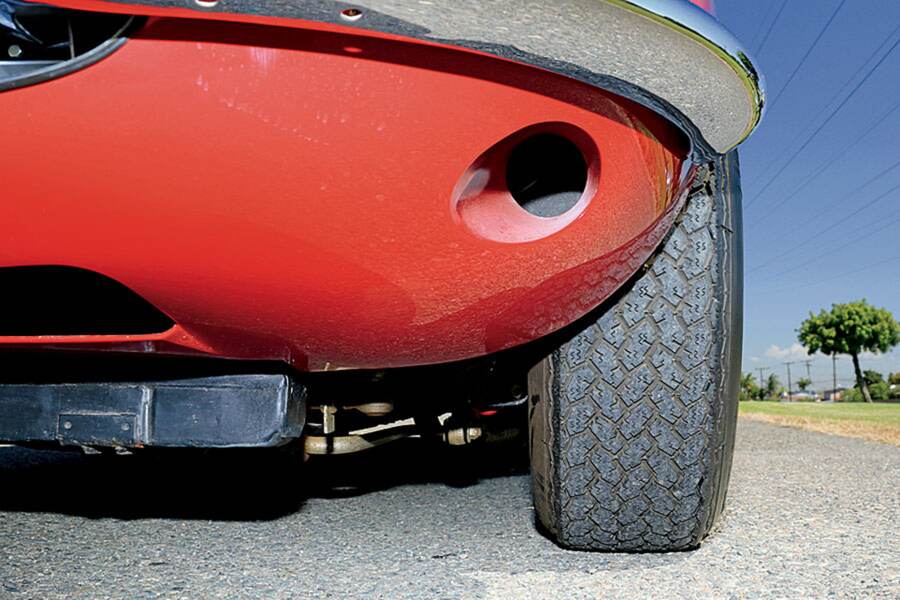 With the astronomical $25-million hammer price realized at Monterey this past August for one of the ten original 275 GTS/4 NART Spyders, questions will inevitably arise about the value of Gibson’s car, and if it has been buoyed by that recent sale. While the custom coachwork is certainly beautiful, it was completed nearly two decades after the car was new, at which point the North American Racing Team was essentially defunct. Furthermore, Ferrari speculators often prize originality above all else, leaving one to wonder about this car’s precise provenance.

Is it a real Ferrari? Of course. An authentic Chinetti-built car? Unquestionably. A genuine NART car? In a loose sense, certainly. But has the 365 GT NART Spider’s value risen in relative proportion to the record-setting 275? Or, if offered publicly, would it fall short of the current million-dollar value that it might reach in stock GTC form? Unfortunately, no expert or historian can divine such a thing; only the car’s next public offering (whenever that might come) and the vigor of interested bidders will ultimately answer just how much cachet the NART badge really brings.

Either way, most tifosi are doubtlessly delighted that such a beautiful Chinetti creation has been dutifully preserved over the last few decades. And now it’s ready to once again prompt double-takes, beg questions and invite fascination. 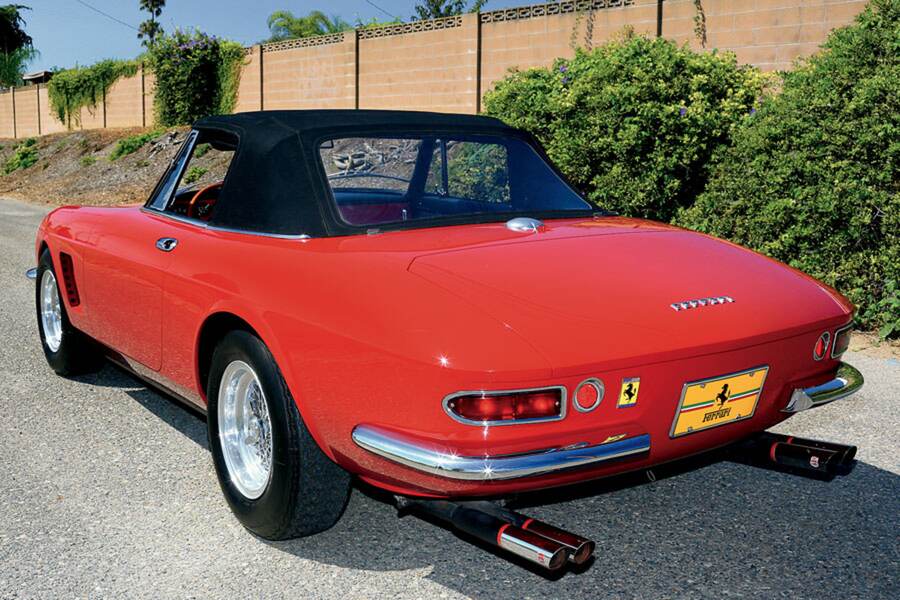 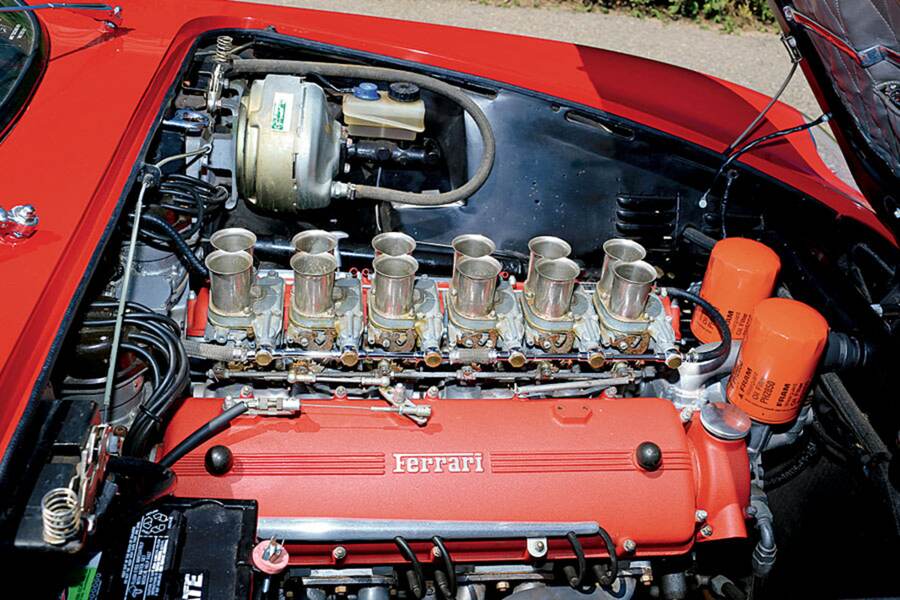