After being written off by an insurance company, this Challenge Stradale was rebuilt and returned to the street. 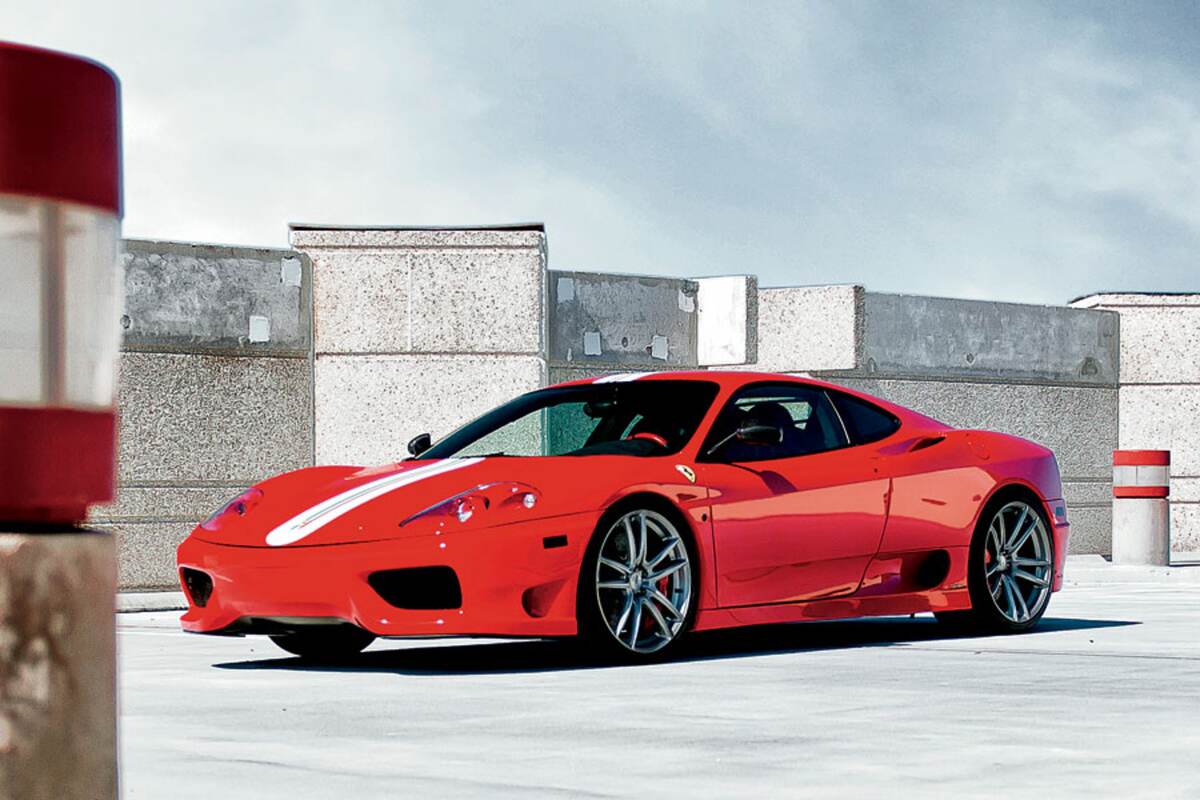 The story of this 2004 Challenge Stradale includes one very unfortunate chapter. It was every car enthusiast’s worst fear: The owner loaned his Ferrari to a friend, and that friend crashed it. It wasn’t just any crash, either. The car spun in a damp, off-camber corner then flipped onto its roof. Off the road and bottom up, this Challenge Stradale, one of around 350 imported to the U.S., then slid slowly down a grass-covered hill. Ouch.

Fortunately, the car’s occupants walked away unhurt. Unfortunately, this rare Ferrari’s roof, rear hatch and right rear quarter panel were left looking like crumpled paper. Although the car seemed mostly unharmed, aside from the bodywork and a smashed windshield, the owner’s insurance company totaled it. The battered Challenge Stradale was soon listed on eBay for around $75,000; crash-free examples in good condition start at roughly $125,000.

That likely would have been the end of s/n 134675—most such damaged exotics end up being dismantled for parts—but, luckily, somebody had the vision and the guts to save the Ferrari and fix it. Giancarlo Godz, a South American immigrant in his early 30s, spotted it online and saw an opportunity to add a special car to his garage, which already contained a Lamborghini Gallardo Superleggera. 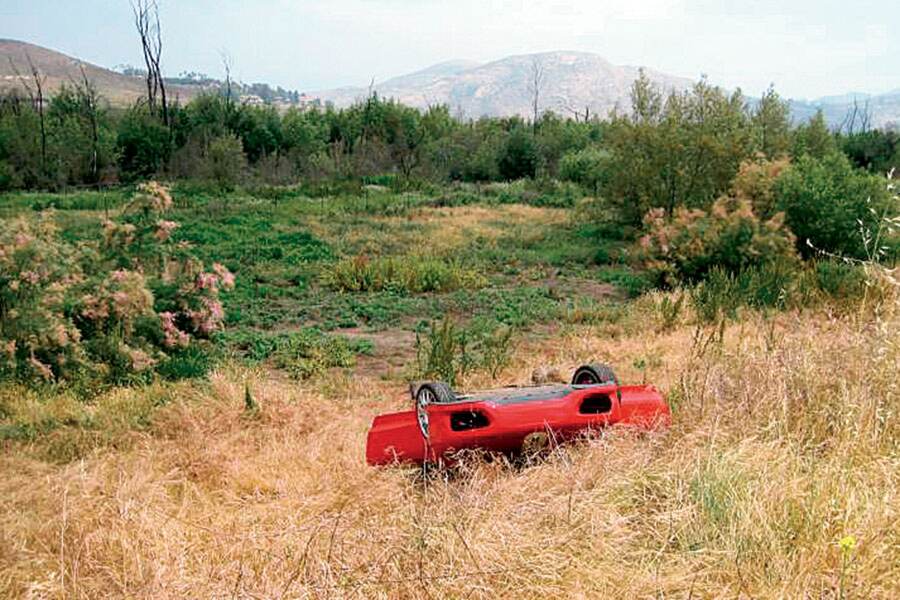 “There’s a lot of red Stradales out there, but there are only a few of them that have the Scuderia Red with the stripe and dual-tone interior,” says the South Florida resident. “It was exactly what I was looking for: I believe in special-edition cars and, based on its VIN, this car was number 11 in the country.”

Ferrari built roughly 1,300 Challenge Stradales, versus more than 16,000 360 Modenas and Spiders, but the model’s appeal goes much deeper than rarity. Compared to the base 360, the Challenge Stradale drops 240 pounds through a liberal dose of carbon fiber, a relatively bare interior, carbon-ceramic brakes, a Lexan engine-cover window and more. Elsewhere, the 3.6-liter V8 was massaged to produce 425 horsepower, up from 400, the suspension was stiffened and lowered, and the bodywork was revised for more downforce. All of this makes the Challenge Stradale a thrilling, more extreme car to drive than the “regular” 360, and that perfectly fit Godz’s desires.

While he was scrutinizing post-accident pictures, Godz found that the damage didn’t seem as bad as expected. Beyond the crumpled bodywork, he says, the Challenge Stradale was “in good condition, and a really good car. I think there’s a big misconception on cars that are salvaged, because they’re being totaled by an insurance company. I think that only happens in the United States. In a lot of European countries, they would take a car like this and they will fix it and it will be acceptable as a repair car, not as a branded, rebuilt title.” 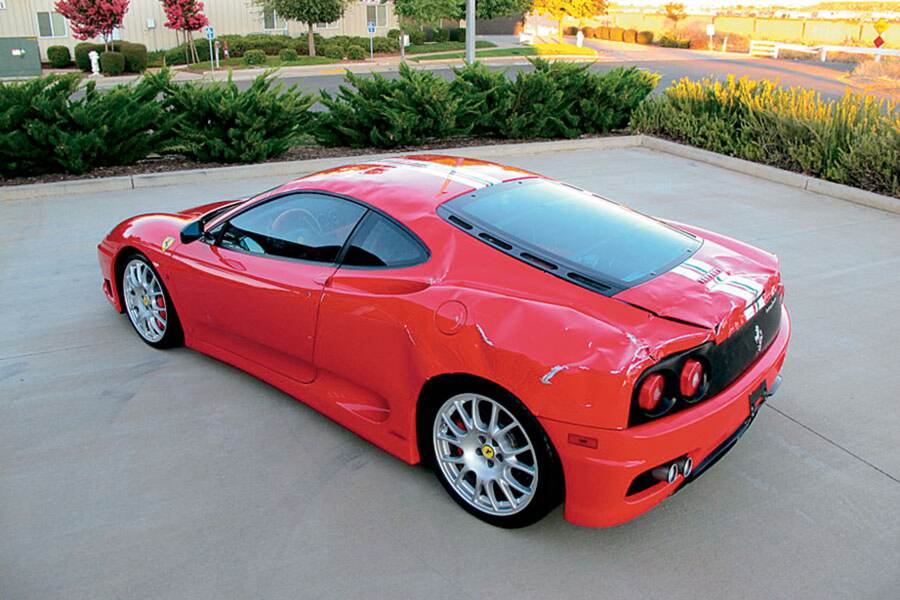 On a personal level, Godz liked the idea of bringing the Ferrari back to its former glory. “The type of person I am, I love the before and after,” he explains. “The taking something raw and making it shine. I looked at this as a challenge.”

IN AUGUST 2011, Godz purchased the Ferrari. He had it shipped from Northern California to his home in Boca Raton, where he drove it off the transporter and into his garage. “It drove perfectly before the fix,” he relates.

Once the car was in the garage, Godz started pulling parts, preparing it for the body shop. “I wanted to make sure that I was gonna do that myself so I knew how [the parts] would go back in,” he says. Off came the damaged hatch, rear grille and taillights, out came the seats and carpet (to protect them from damage when the new body panels were welded on). The driver’s side door had been dented in the accident and needed attention, so the interior door panel, window and window mechanism were removed, as well. 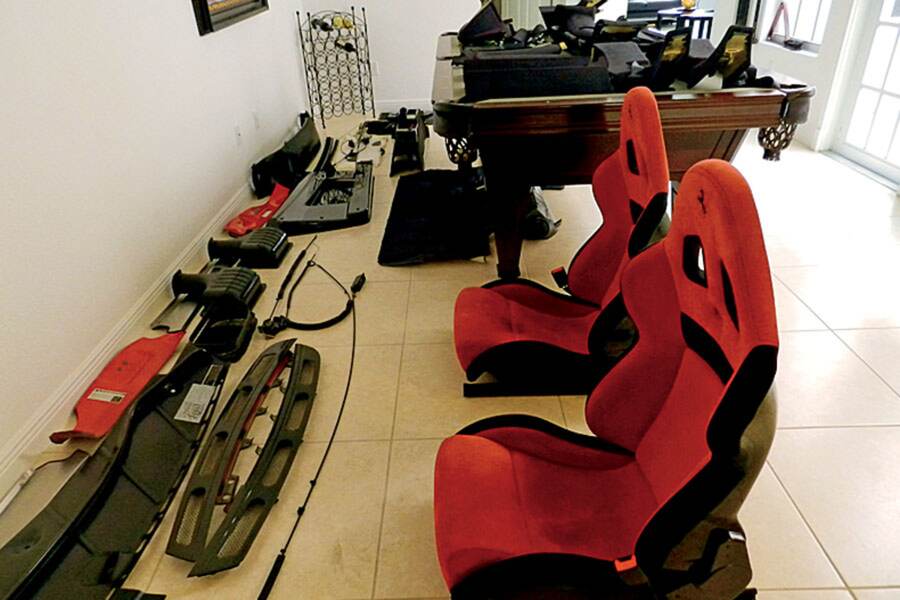 The process had to be well-organized, so as components came off, Godz bagged and labeled them, taking photos, shooting video and writing notes along the way. He also measured the rear portion of the aluminum chassis to make sure it hadn’t been damaged. “The inner structure built by Alcoa was intact,” he reports. “All of the damage was superficial, just the skin of the roof and the left-side quarter panel.”

When he was done, Godz had the Ferrari towed to Jaime’s Auto Job in Pompano Beach. Jaime Moreno, who emigrated from Colombia to the U.S. 13 years ago, has 35 years of body-repair experience, which no doubt explains the quiet confidence he exudes when talking about his trade. His small company only takes in one or two damaged cars (usually classics) at a time, and Moreno says he doesn’t rush his work, instead doing what he needs to do to get the job done properly.

“This [job] was more complicated because it was a Ferrari and it was expensive,” says Moreno, whose son, Cristian, also worked on the Challenge Stradale and helped translate his father’s Spanish and heavily accented English. “But it was not hard for me. I like a complicated job.” 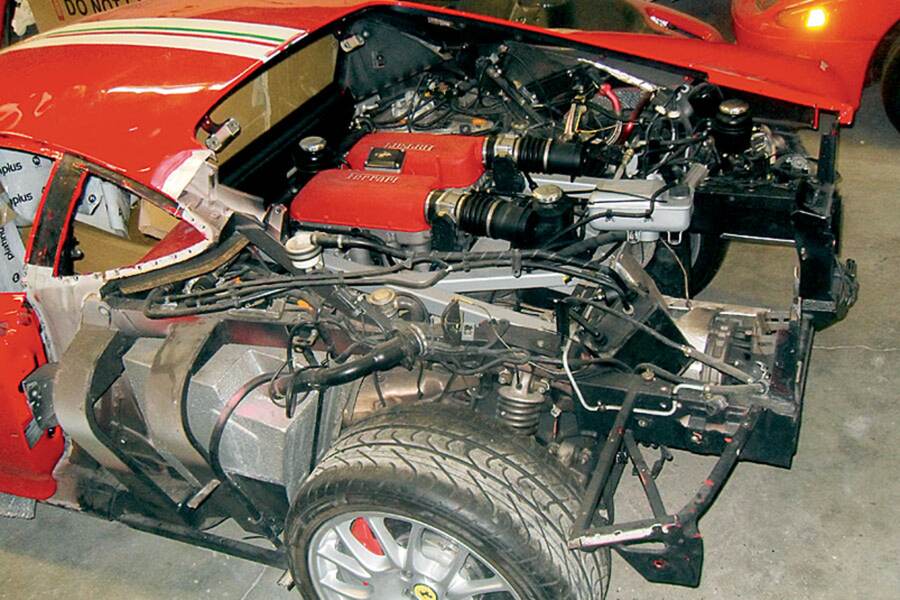 Godz had chosen Moreno in part because he said he could repair the Ferrari without removing its roof. “A lot of body guys suggested cutting off the roof and pillars, and basically replacing the whole roof along with the quarter panel, and I didn’t want to do that,” explains Godz.

After he removed the damaged quarter panel, Moreno turned his attention to the battered roof. With a hammer and block, he pounded out the dents in the aluminum, using no plastic filler material, and also pulled the roof upward slightly with a frame machine to line it up with the replacement quarter panel.

Almost all of the parts that were replaced, including the rear hatch and its Lexan panel, the quarter panel and the rear grille, came from another Challenge Stradale that had suffered severe front-end damage. Godz found that car online, too, and arranged to have the donor components shipped from Canada to Moreno. 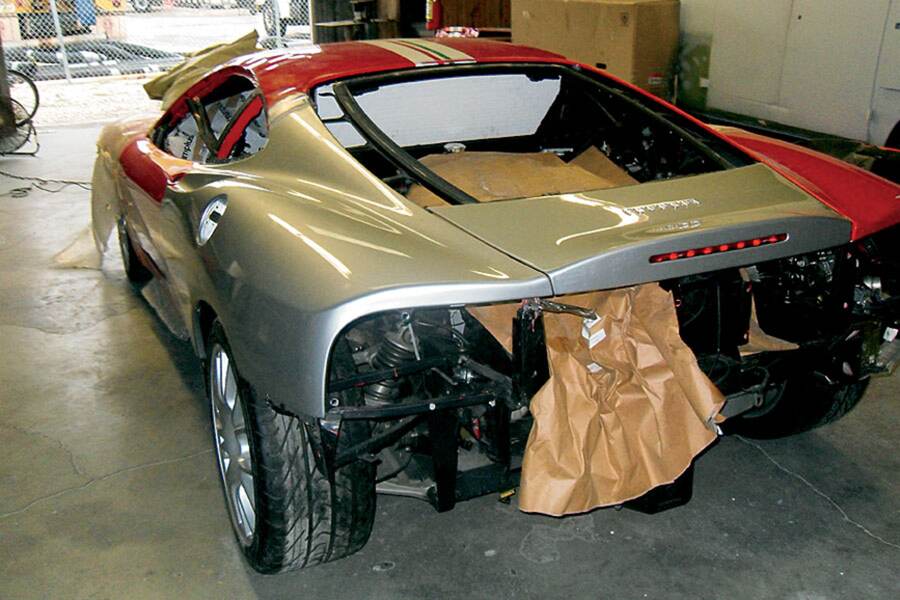 In the body shop, the replacement aluminum quarter panel was lined up and MIG welded in place, then any minor imperfections were smoothed out. Moreno also repaired the right-side rocker panel, which had been lightly damaged in the rollover.

With the bodywork complete, it was time for color. The paint on the undamaged panels was in excellent shape, so Moreno didn’t want to repaint them. But, since paint gradually fades over time as it is exposed to the sun, he had to formulate a custom color to match the existing eight-year-old hue.

Following a coat of primer, the custom red paint was sprayed on the roof, left quarter panel, hatch, both bumpers, right-side rocker panel and the repaired left-side door. After the paint dried, the multi-color racing stripe was laid down and two coats of clear were sprayed on. (From the factory, the stripe sat on top of the clear coat.) 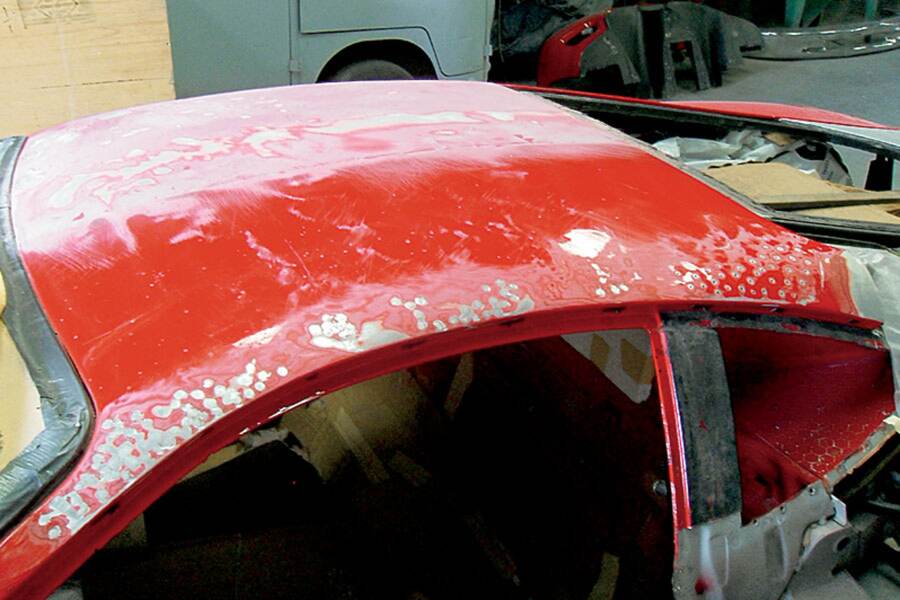 The Ferrari was then rolled outside for a week so the clear coat could cure before it was sanded down with increasingly fine-grit sandpaper. This process of spraying, curing and sanding was repeated twice more, for a total of six clear coats and a smooth finish.

“If you pass your finger over the stripe, you will not feel a bump,” says Moreno. “It will feel straight, flat.”

In addition to the repair work, Godz had a clear bra applied to the whole front end and the rocker panels. He also had a few modifications done. “I had the paint shop smoke the rear taillights and all the bumper lenses,” he says. 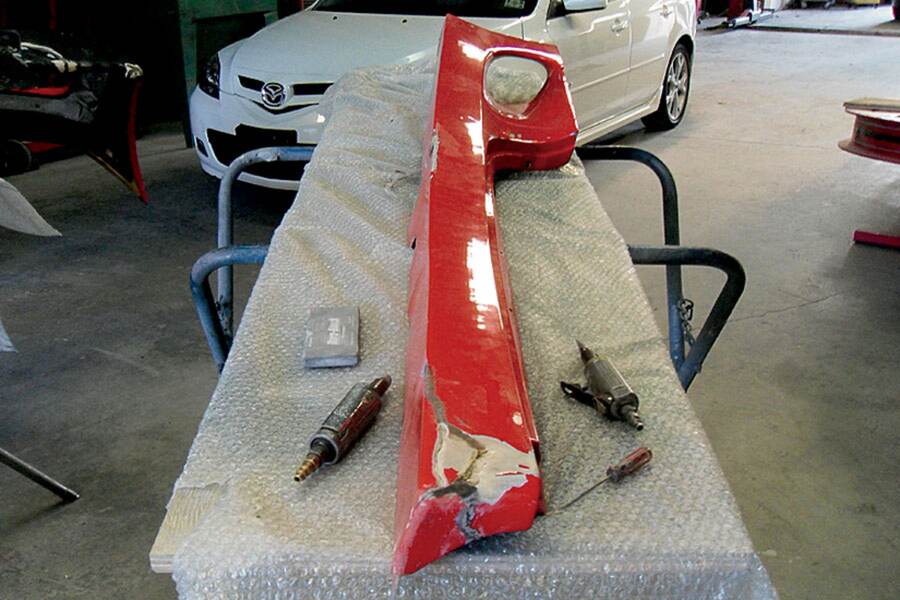 WHEN MORENO WAS FINISHED and a new windshield had been installed, Godz had the Challenge Stradale towed back to his garage. Using the notes and media he had created during disassembly, he began to reinstall the parts he had removed. It wasn’t always an easy process, he says: “I had to take the window regulator out, and I had to put it back together at least three times to get it just right.”

While he was at it, Godz removed the catalytic converters and installed test pipes, fitted K&N air filters and permanently opened the sound-restricting valves in the stock muffler. Now the screaming V8 can be heard clearly at low, as well as high, revs.

“Probably the number-one thing that people mention in comments about the car is the sound,” he says. “It just sounds really good—not too loud, not too quiet.” 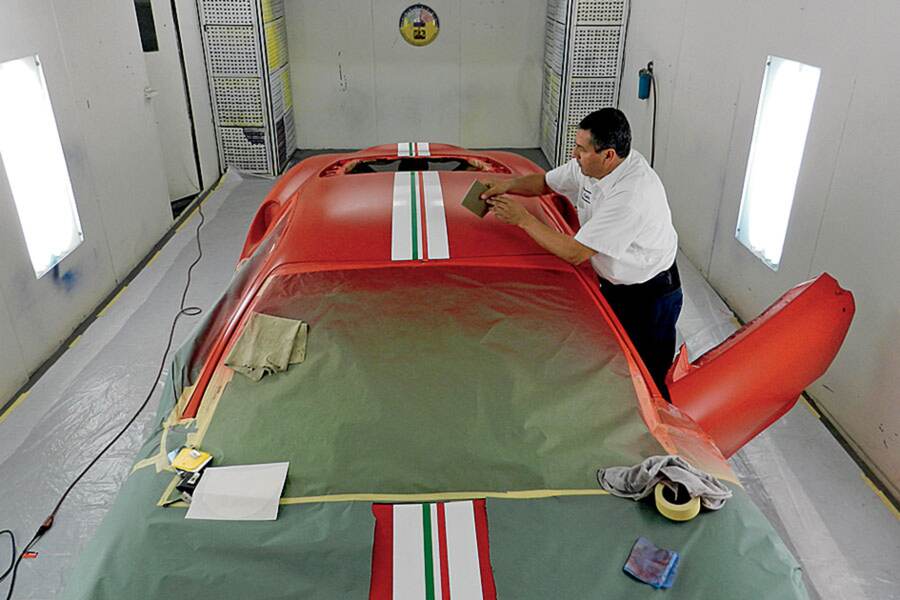 Godz also slightly lowered the rear of the car, courtesy of the Stradale’s stock adjustable coilover suspension. “I did two turns on each side on the rear; I didn’t even touch the front,” he says. The suspension’s caster and rear camber angles were also adjusted for maximum grip in the corners.

The reborn Challenge Stradale looks outstanding, and Godz says that people can’t tell that it’s had any sort of body repair. At car shows, he says, “I’m watching people look at the car, and they’re talking about how this was the car on the [online discussion] forum and it looks like it [was repaired]—but they’re looking at the wrong side!” 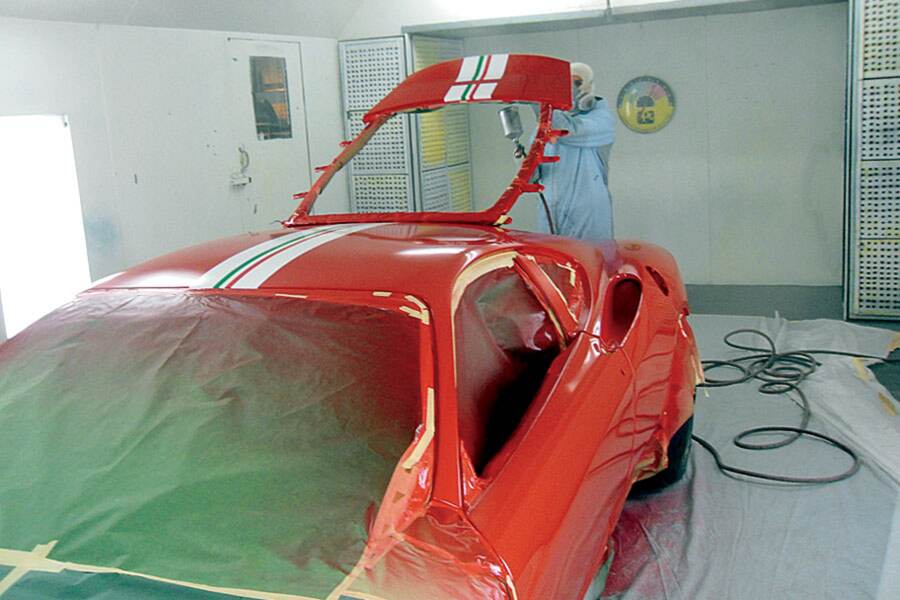 Saving a damaged car is not the type of task many enthusiasts would consider. But Godz’s philosophy in life helped him finish the project. “I think that you have to be able to focus on the end product and be ready to do anything that is necessary to get there,” he says. “If you’re able to visualize the end product and know exactly what it will look like, or what it could be, then you can take on anything.”

From the start of this adventure, Giancarlo Godz saw past the initial images of the crumpled Ferrari. Now, the story’s happy ending is plain for everyone to see. 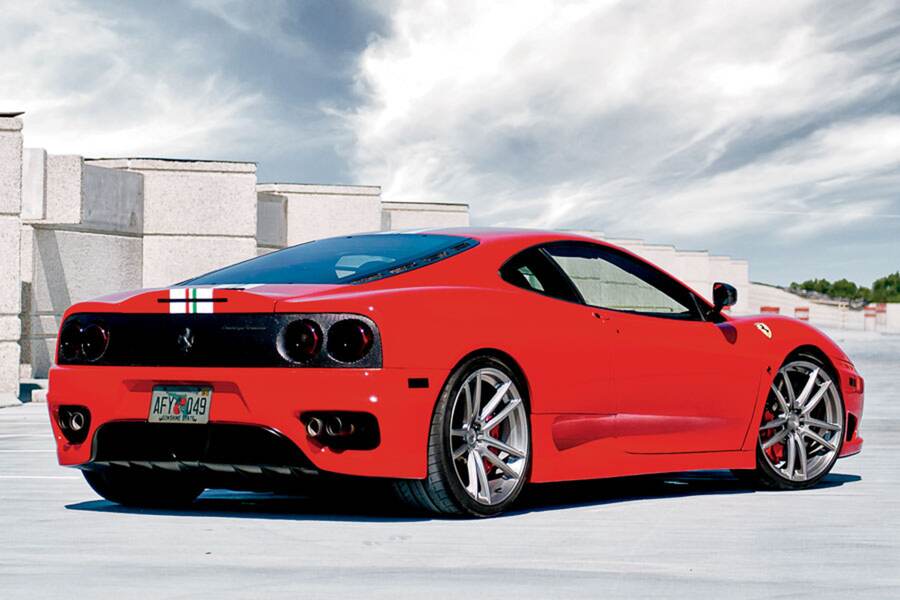