We go behind the scenes with Grand-Am’s only full-time Ferrari team. 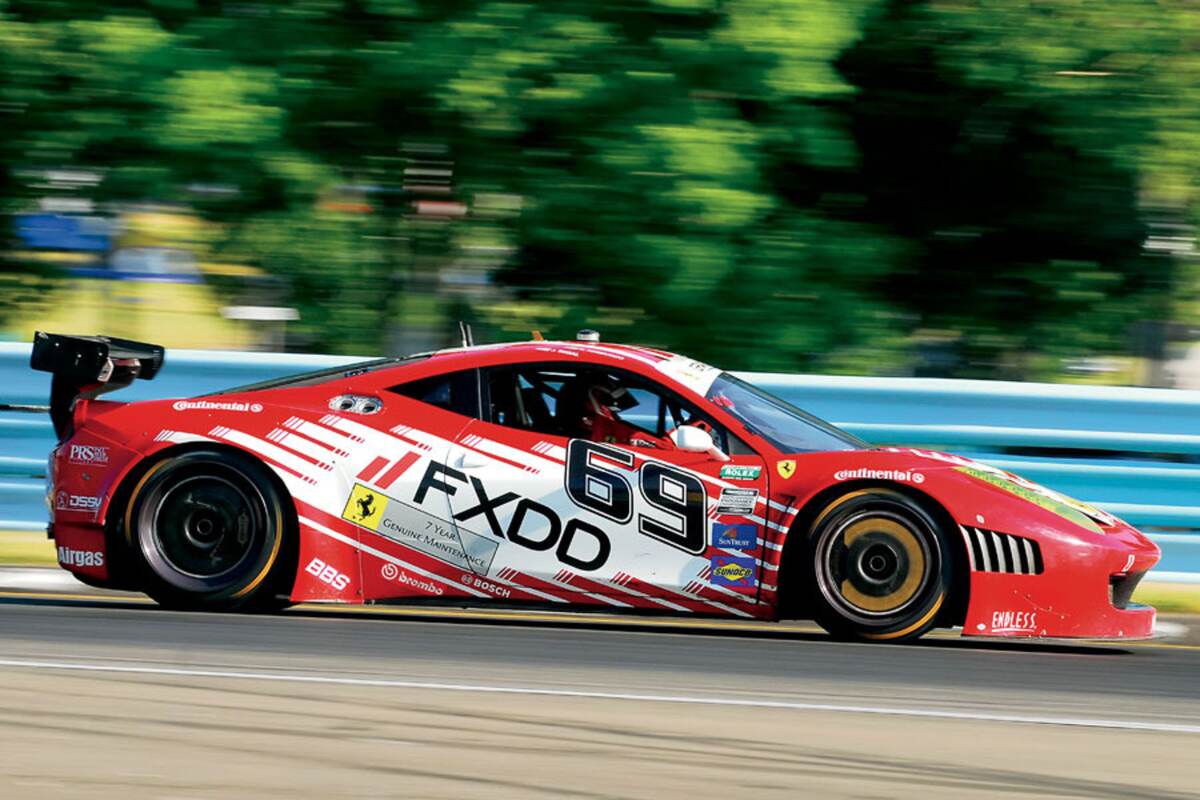 For almost any fan of sports-car racing, all is right with the world when you can watch a Ferrari ripping around a challenging road course at full speed. It’s even better when that circuit is the legendary Watkins Glen, in New York’s Finger Lakes region, the race is the Six Hours of Watkins Glen, the second-longest event on the Grand-Am calendar, and AIM Autosport is leading the Rolex GT championship with its Ferrari 458 Grand-Am.

AIM Autosport is the only Ferrari team contesting the full 2012 Grand-Am season, and it was riding a wave of momentum coming into Watkins Glen. In the previous seven races, the #69 Ferrari had scored five podium finishes with three wins, including a victory the weekend before at Road America in Wisconsin. These consistently strong results had put Jeff Segal and Emil Assentato at the top of the driver’s championship, Ferrari atop the manufacturer’s championship and made AIM the team to beat in the GT class.

WATKINS GLEN WOULD BE the fourth race in five weeks, so AIM’s preparation began the day after its win at Road America. The team transporter headed from Elkhart Lake, Wisconsin to Lake Forest Sportscars in Lake Bluff, Illinois. There, the crew went through the Ferrari with a fine-tooth comb. 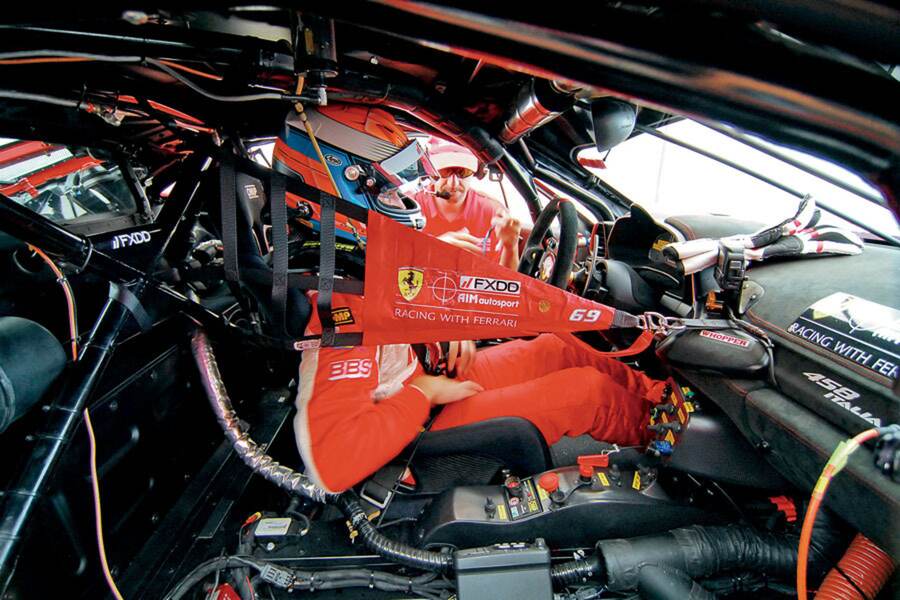 “With Watkins Glen being a six-hour race, we had more maintenance to do,” said Ian Willis, who is one of AIM’s team owners as well as its chief engineer. “We went through the components on the 458 to make sure we weren’t getting toward the end of the life cycle on some of the parts.”

Thus far, the Ferrari has proven to be exceptionally reliable. For example, the Michelotto-built 4.5-liter V8 engine has held up extremely well to the rigors of racing, helped in part by Grand-Am rules that require it to be detuned to approximately 485 hp, down from 570 hp in street form.

“We pulled the engine out [in May] for the New Jersey race since it had 10,000 kilometers on it, which is the recommended service interval from Michelotto,” Willis recalled. “They were very happy with what they saw when they took it apart. Our instinct is that we could run an engine for a full season, but that’s something Michelotto is still evaluating.” 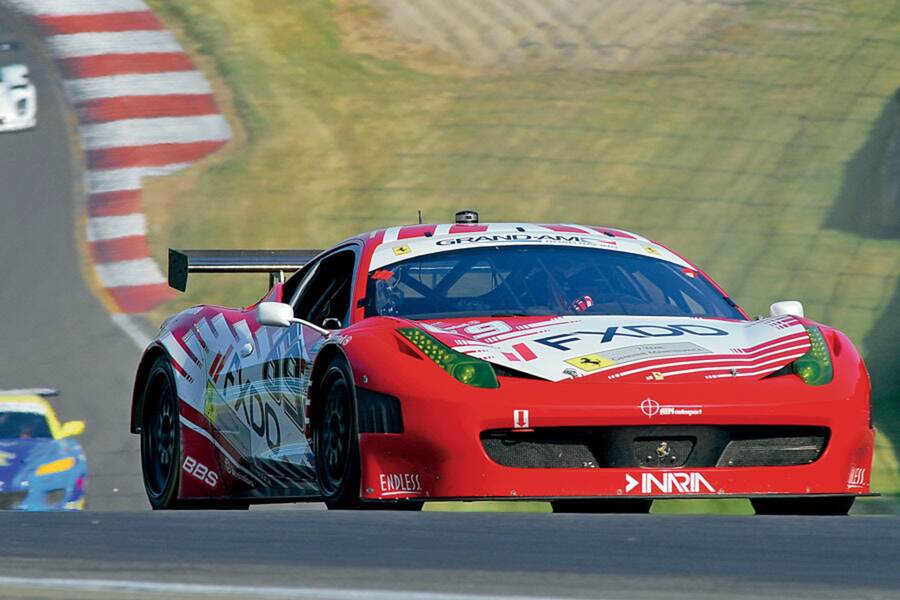 After two days spent checking over the car in Illinois, AIM’s transporter made the 700-mile drive to Watkins Glen for the promoter test day on Thursday. These test days give the many “gentleman drivers” participating in the series the opportunity to spend more time in the car before the official practice sessions start. Assentato, who owns the team’s primary sponsor, FXDD, has been racing for decades (and won the 2010 Rolex GT championship in a Mazda RX-8 with regular co-driver Segal) but is not a full-time pro, so took advantage of the day before having to share the car with Segal and Anthony Lazzaro, who was brought in as a third driver for Watkins Glen.

The additional track time also gave the team a head start setting up the car for the new track. AIM has extensive experience racing formula cars and has competed in Grand-Am with a Daytona Prototype, but it’s new to GTs like the 458. “With prototypes or formula cars, you work from the top down,” said Willis. “On a production-based car like the Ferrari, you work from the bottom up, so we had to change our ideology and the tooling on some equipment. The advantage of the Ferrari is that it’s mid-engined, so from a vehicle-dynamics point of view, it’s similar to a prototype.”

Further complicating development for AIM is the fact that its 458 Grand-Am is one of only a few in existence, as well as the only one that’s raced regularly. While the model is based on the popular-in-Europe 458 GT3, there are enough differences—including a higher ride height, less downforce and a harder-compound spec tire—that AIM is pretty much on its own when it comes to suspension tuning. As a result, the team has fitted new Hypercoil springs in place of the originals, while retaining the stock Dynamic DSSV dampers. 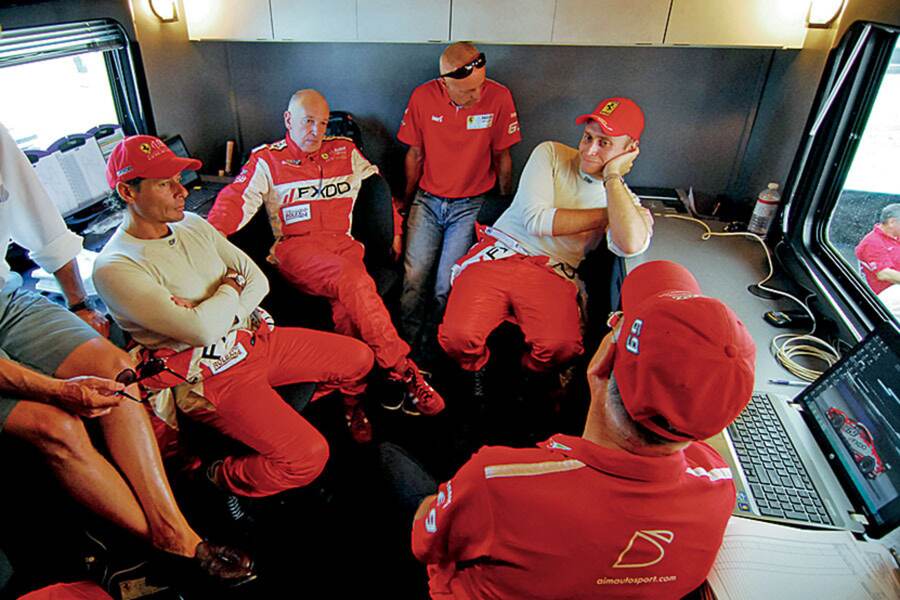 THE TEAM CONTINUED TO FINE-TUNE the Ferrari’s setup once official practice commenced on Friday. AIM and all the other GT contenders faced a challenge in that, while the two circuits outwardly seem very similar, Watkins Glen is really very different than Road America. “When you really look at Road America, it’s like a street circuit with long straights,” said Willis. “A lot of the corners are ninety degrees, so it required a different chassis setup than what we run at tracks with long sweeping corners, like Watkins Glen, where you load the car more.”

The day almost became a lot more challenging when a rear suspension component that was near the end of its life span failed while the Ferrari was travelling at 120 mph, sending Segal into a spin in the “bus stop” chicane at the end of the back straight. Luckily, the spin didn’t end in contact with the blue Armco that lines the circuit, as repairs could have caused a significant loss of track time or, worse yet, withdrawal from the race. “We know if we damage the Ferrari, it could take some time to fix,” noted Segal of the all-aluminum space-frame machine. “It’s not a tube-framed car that you can take out back with a hammer and get it to work again.”

Saturday started with a final practice session that AIM used to further dial in the Ferrari. In the day’s qualifying session, Assentato put the Ferrari third on the grid, behind a Chevy Camaro GT.R and an Audi R8. Starting position may not be that important in terms of strategy for a six-hour race, but it’s good to be up front in order to avoid the banging that goes on further back in the field as drivers battle for position on the first lap. The other two Ferrari teams on hand, AF-Waltrip and Extreme Speed Motorsports, both of which are running just a few races this year, qualified 13th and 14th, respectively. 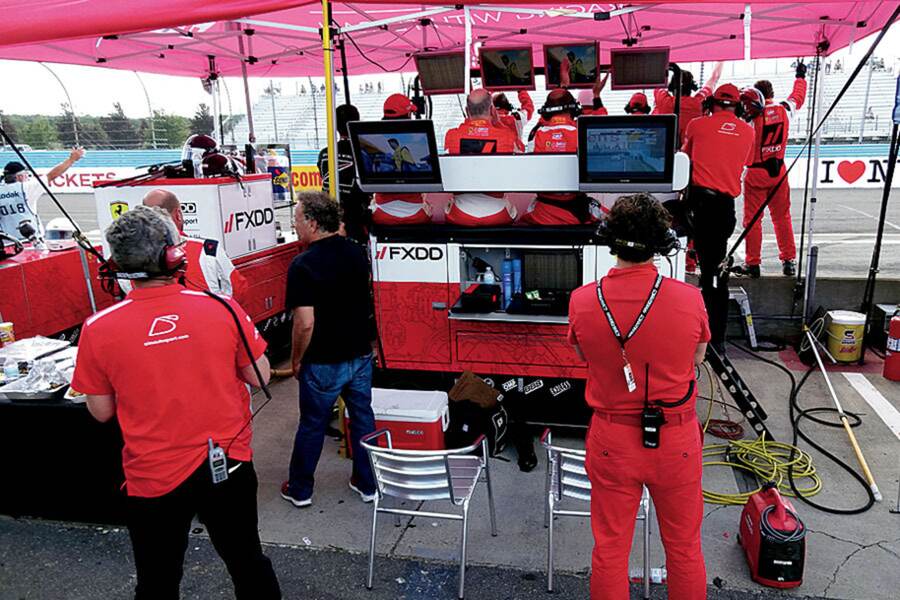 After qualifying, the AIM crew spent the rest of the day checking over the car to make sure everything was ready for Sunday’s race, as well as preparing spares and subassemblies that might be needed in case of emergency. In the meantime, the drivers attended an hour-long fan autograph session. “We’re more popular with the fans now that we’re driving a Ferrari,” noted Segal. “There were so many people at the autograph session that we spent over an hour signing autographs, and there were still people in line that didn’t get to us by the time it was over.”

Sunday morning saw yet more last-minute checks, while the final practice session was used to bed in the brake pads that would be used for the start. The drivers also had a final strategy meeting with Willis and Nick Longhi. (The multi-talented Longhi, who co-drove the Ferrari at the Daytona season-opener, manages FXDD’s motorsport activities and acts as an engineering liaison between the drivers and Willis and data engineer Stefano Galante.) Willis confirmed the driving order, discussed strategy for caution periods and revealed a last-minute damper change, while the drivers shared notes on morning track conditions and other cars to watch out for during the race.

WHEN THE GREEN FLAG DROPPED, Assentato quickly slotted the Ferrari into second place. He remained there until the first caution period, when the team brought the car into the pits and Segal climbed in. 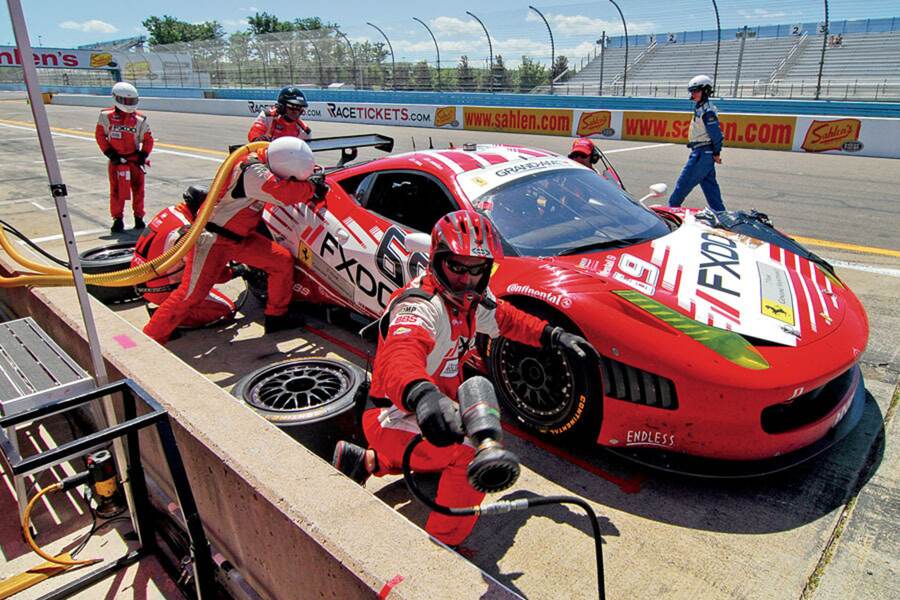 Beyond making sure everything is ready for planned driver and tire changes, as well as refueling, the crew spends much of the race watching the monitors and anticipating any unexpected pit stops. One such stop came early in Segal’s first stint, still in the first hour, when he made contact with a Mazda. The collision cost the Ferrari a big chunk of its left front bodywork.

Segal immediately pitted, and the team scrambled to reinforce the damaged area with tape in order to avoid losing any more bodywork. Pitting under green for repairs was a serious setback, but the team managed to work its way back into the top six by the last hour—despite the missing bodywork causing some understeer and a slight reduction in top speed.

The team was happy that the damage didn’t get any worse. “The 458 is a very solid car,” said Longhi. “That fender would have been completely gone in some other cars after taking a hit like that.” 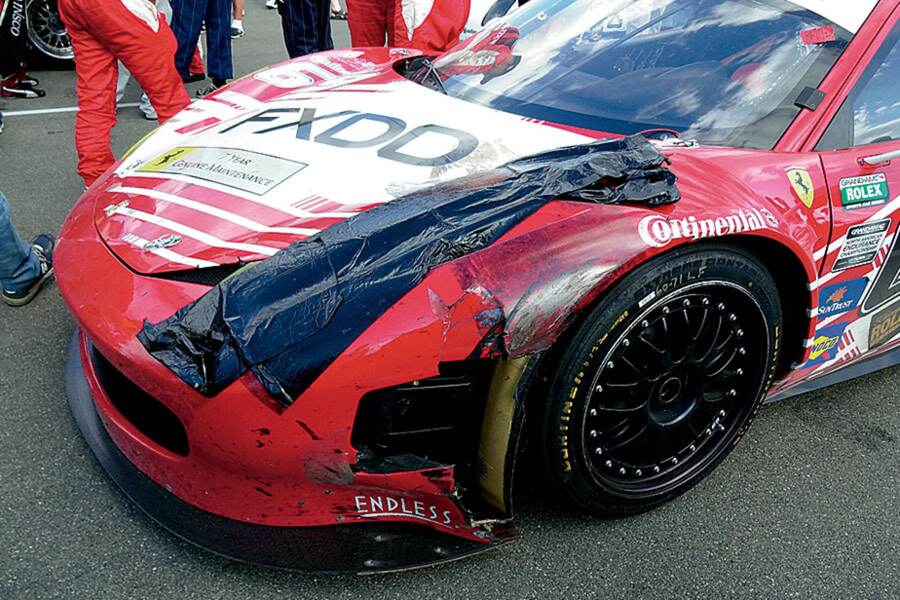 With time running out, a full-course yellow saw some of the GT cars mistakenly waved past the safety car. This put the AIM Ferrari in a position to fight for the podium, and Segal managed to climb into third place in the closing stages of the race. By this time, however, he had to conserve fuel in order to finish.

“We were sweating bullets at the end,” said Willis. “If we would have had to run two more laps, we wouldn’t have made it—and if we had to do one more lap, we might have been coasting across.”

When the checkered flag flew, the Ferrari crossed the finish line in third, behind the winning Camaro and a BMW M3. The Extreme Speed Motorsports Ferrari finished fourth, with the AF-Waltrip car coming home in 11th. 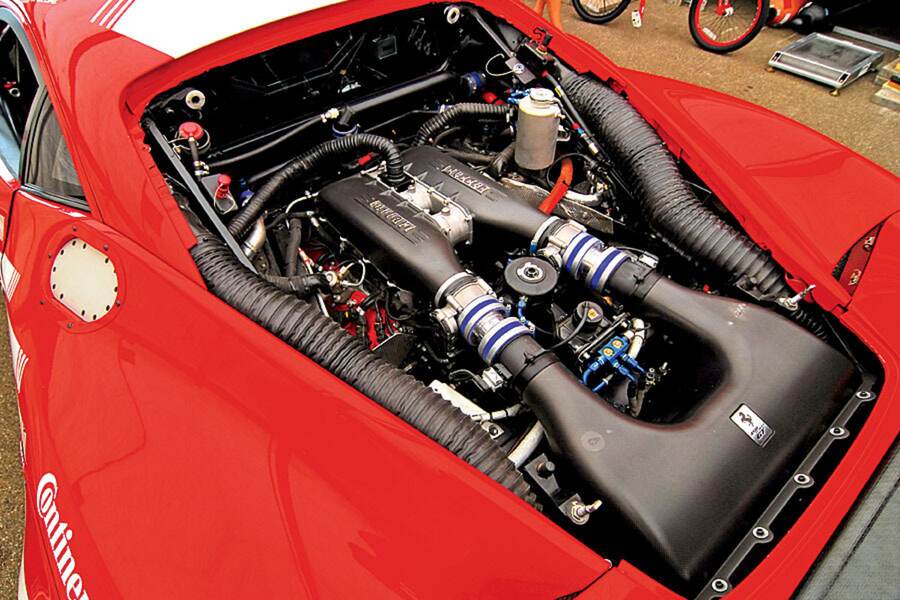 The podium finish helped AIM maintain its points lead in the three championships. There are still five races left to run in the season, however, so the team will have to remain consistent in order to stay on top of the close-fought contest.

A little more than halfway through its first season with the 458 Grand-Am, AIM remains very happy with the way things have gone, and is already committed to returning to Rolex GT competition next year. “We’re working on the future, because for us this is exactly what we want to do,” said Longhi. “We’re going to be back next year and hopefully the year after that and so on, and we’re doing it with respect for what Ferrari means. We’re very aware of what a privilege it is to be involved with Ferrari. It’s a fantastic relationship.” 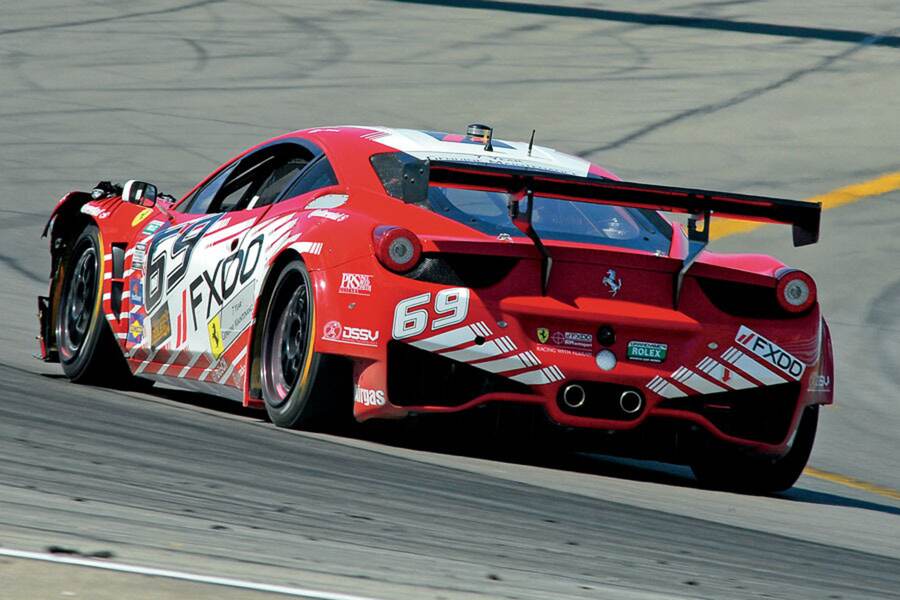