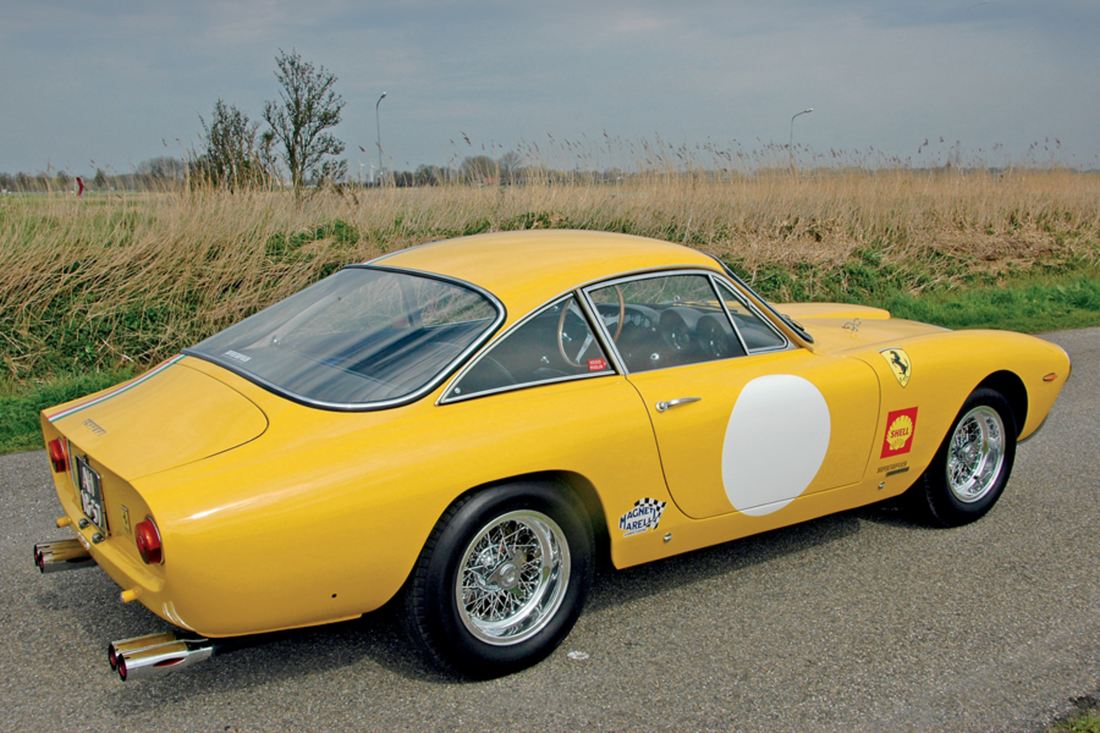 The 250 GT/L is widely praised by designers and enthusiasts alike as one of Pininfarina’s most elegant and timeless designs. It is recognizably a Ferrari, and incorporates several cues from earlier Prancing Horses, including the hood scoop, open and upright headlights and the way the hood falls between them to the traditional egg-crate grille. But the Lusso tweaks the usual elements into an astonishingly beautiful whole.

For example, pushing the leading edge of the hood and the front bumper forward of the headlights gives the car a more aggressive face. The airy greenhouse sits atop a smoothly flowing fenderline that sweeps uninterrupted from nose to truncated tail. The rear is the only sharp break on the entire car, and the concave rear panel combines beautifully with the convex flanks. What a sight!

Among the model’s many admirers is Dutchman Willem Kroon. I meet Kroon at his home in a small village just north of Amsterdam. When I enter his living room, I find myself staring at his Lusso (s/n 5847GT), which is parked in an adjacent decorated room, separated only by big sliding glass doors. 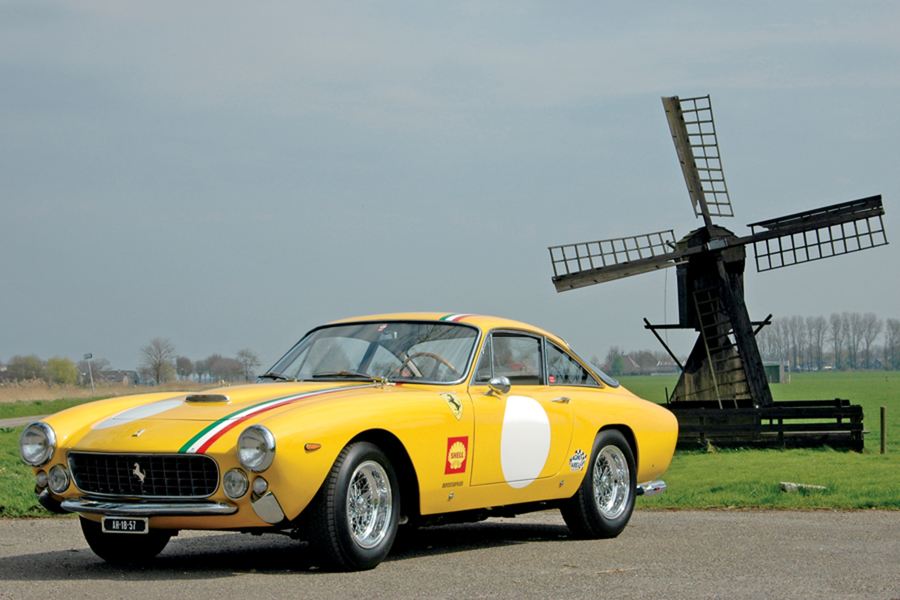 In 1993, Kroon bought his first Ferrari, a ’77 308 GTB which he still owns. However, his dream was to own a Lusso. “Every time I saw one owned by one of my fellow members of the Dutch Ferrari Club, in real life or featured in our club magazine, I was impressed,” he says. “Those lines, the details, it’s brilliant. Its design expresses power as well as elegance, a great combination.”

EVEN DISCOUNTING ITS LOOKS, the Lusso represents a milestone in Ferrari’s history: It’s the last of the famous 250 GT series of cars with the 3-liter Colombo V12 engine. The model was unveiled in late 1962, a year dominated by the debut and first race victories of the legendary 250 GTO. While the two machines were quite different in mission and appearance, they were very similar mechanically.

As mentioned, the engine was the final evolution of the 2,953cc 60° SOHC V12 designed by Gioacchino Colombo. Based on his original 1,995cc 166 powerplant from 1947, the 250 engine was created in the early ’50s by increasing the bore, step by step, from 60mm to 65mm (creating the 195), 68mm (resulting in the 212), 70mm (the 225) and, finally, 73mm. The 3-liter mill was used in various specifications—different lubrication, compression, camshafts and carburetors—between 1952 and ’65 in more than 15 Ferraris, ranging from early sports racers to numerous Gran Turismos to the company’s first mid-engined V12 prototype, the 250 P. 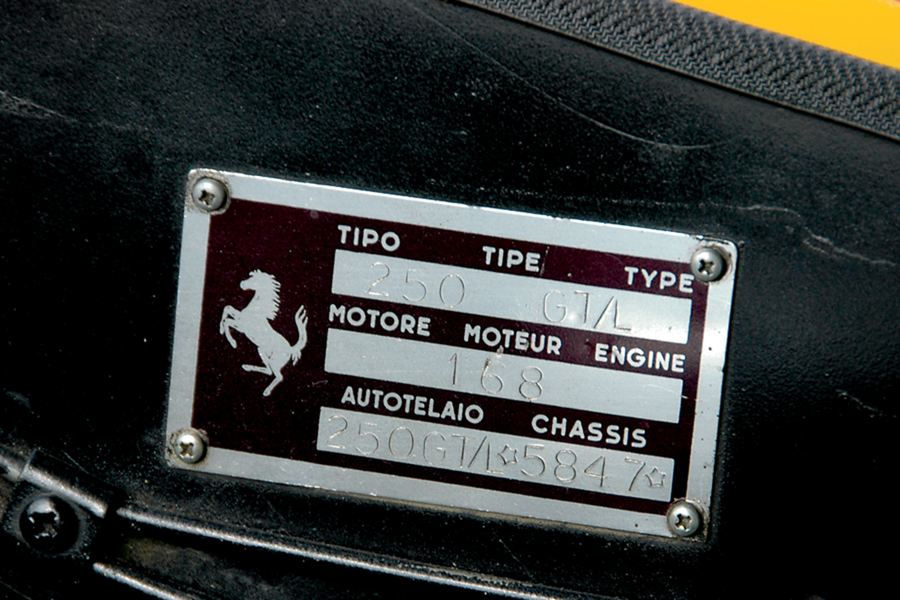 The Lusso’s engine, the Tipo 168U, features a wet sump, 9.2:1 compression and, usually, three twin-choke Weber 36 DCS downdraft carburetors. The factory claimed an output of 250 bhp at 7,500 rpm, which was likely optimistic. Measured performance was very good, however, with a top speed of 150 mph and a 0-60 time of less than seven seconds. The GTO’s engine was quite a bit more powerful, of course, but Lusso owners could request hotter setups of their own, such as high-compression pistons and 36 DCZ or 40 DCL and DCZ carbs.

There are more similarities between Lusso and GTO underneath the skin. The Lusso’s tubular steel Tipo 539 chassis was quite comparable to the GTO’s frame; the primary points of difference were the GTO’s smaller diameter tubing and the Lusso’s forward-mounted engine, which increased cabin space. Other-wise, the independent front suspension and live rear axle, with hydraulic disc brakes and Borrani wire wheels all around, were very much the same.

Unlike earlier 250 GTs built primarily for touring, such as the PF Coupe and GT 2+2, the Lusso did not have the rather problematic overdrive transmission. Instead, it used a conventional four-speed manual mounted in unit with the engine and a dry single-plate clutch. 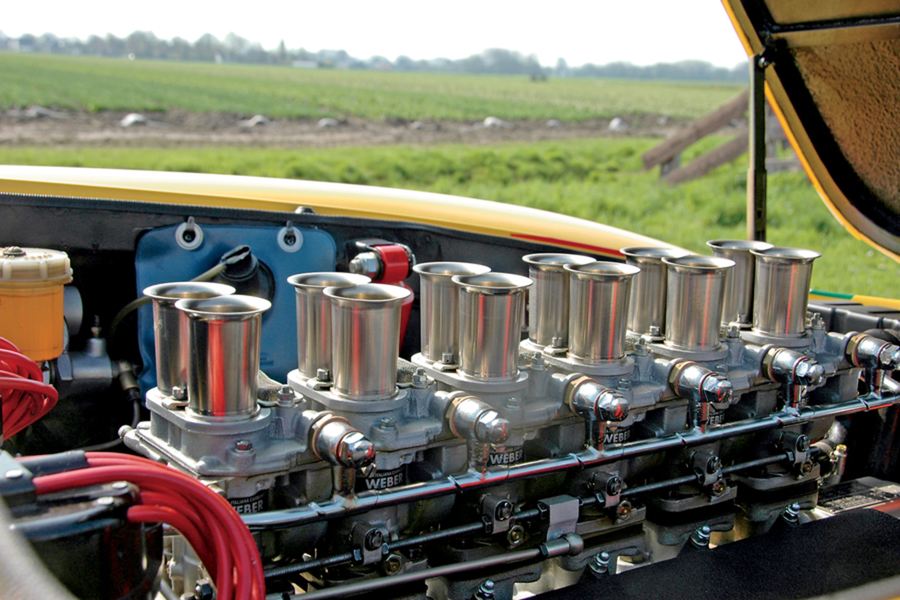 WHILE THE LUSSO WAS BUILT IN HIGH NUMBERS by Ferrari’s standards of the early 1960s, Kroon discovered that finding a good example wasn’t easy. He looked at quite a few cars, but none of them was exactly what he was looking for. Then, one day in 2002, Ferrari specialist Forza Service informed him that a fellow Dutchman was interested in selling his Lusso. “When I was told it was painted bright yellow, I had my doubts,” Kroon remembers. “But when my wife and I actually saw the car, we fell in love immediately.”

The sale was quickly arranged, but that wasn’t the end of things. Says Kroon, “Part of the deal was to redo some mechanical components, to make it even better, although it was very well cared for.” 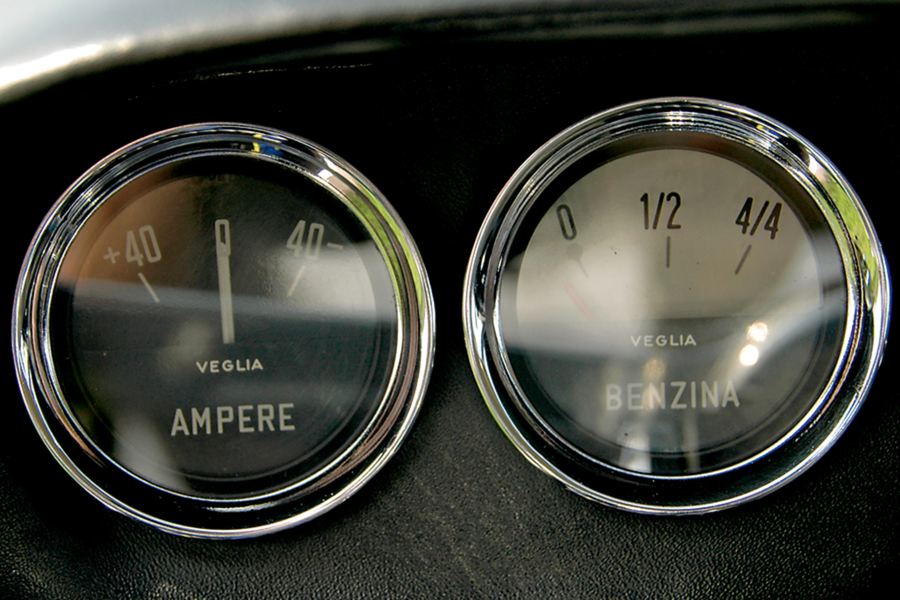 This marked the start of a process to individualize the Lusso to its new owner’s desires. “I wanted to prepare my Lusso in a Competizione style,” he explains. “I removed the airbox and fitted six carburetors with velocity stacks, just like the 250 GTO. The carburetors are newly made by Roelofs Engineering, and they’re not just engine parts, they are works of art! Before being fitted under the hood of the Lusso, I put the carbs on a small table in the living room for a couple of weeks, just for our enjoyment. You could say that, for aesthetic reasons, it’s a pity fuel injection was invented.”

Elsewhere, the engine was opened and the cylinder heads and pistons received some needed repairs. The front suspension and rear axle were rebuilt, and Dunlop racing tires were fitted. Also installed were four-point harnesses and an alloy fuel tank. Kroon did much of the work himself, assisted when needed by Forza Service.

In addition to the mechanical changes, Kroon made an aesthetic one. “Normally, a thin chrome bumper is fitted underneath the rear license plate holder, and wraps around and extends for some distance onto the rear fenders,” he says. “But I have removed and stored the rear bumper, as the car looks much sportier without it. I once removed the front bumper as well, but it disturbs the symmetry with the hood.” 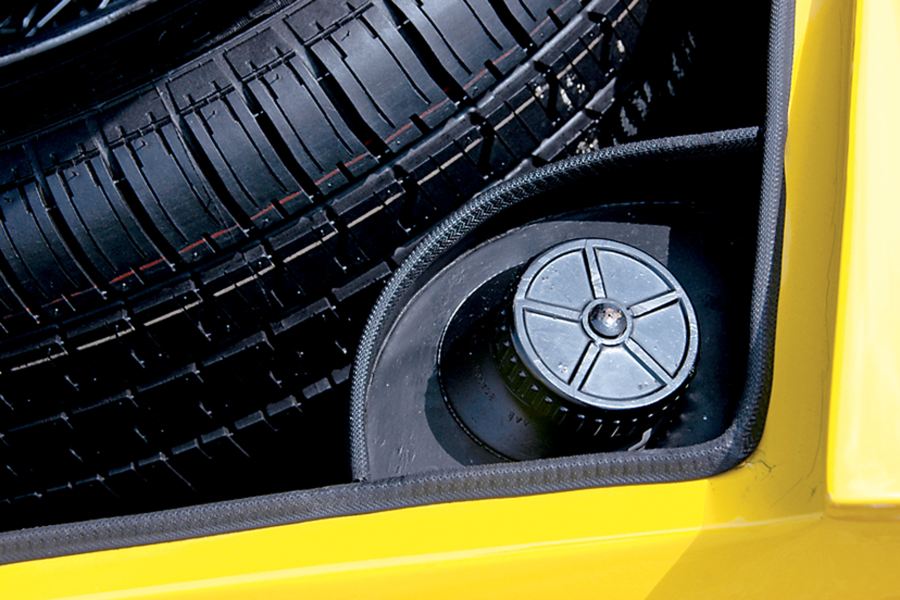 IT’S TIME TO GET ON THE ROAD and take some photographs. Kroon pulls the fuel pump switch and wakes s/n 5847 from its winter sleep. Although the Ferrari hasn’t run for several months, it fires immediately. The “Lusso living room” (I won’t call it a garage) fills with the sound and smell of a classic Ferrari V12.

I find a comfortable place in the passenger’s leather-trimmed seat. The cockpit is light and roomy, helped by the large glass area and very thin roof supports. The dashboard is completely covered with black leather, and is unique among Ferraris in having a large speedometer and tachometer located in the center, slightly angled toward the driver. Underneath these large-diameter instruments are six unmarked switches, although in Kroon’s Lusso small pieces of tape help distinguish their function: wipers, fuel pump, fog lights, fresh air, heater and “panel” (which controls the dashboard lights).

Directly in front of the driver, partly obscured by the wood-rimmed, aluminum-spoked Nardi steering wheel, are five small gauges. In most Lussos, these are a clock, fuel level, oil level, oil temperature and water temperature, but s/n 5487 is one of two cars that left the factory with an ammeter instead of a clock. It has another unusual feature—its ignition lock is placed in a console underneath the steering wheel, instead of in the left part of dashboard, as in most Lussos. It is said this was required by law in Germany, where the car was sold new in early 1964. 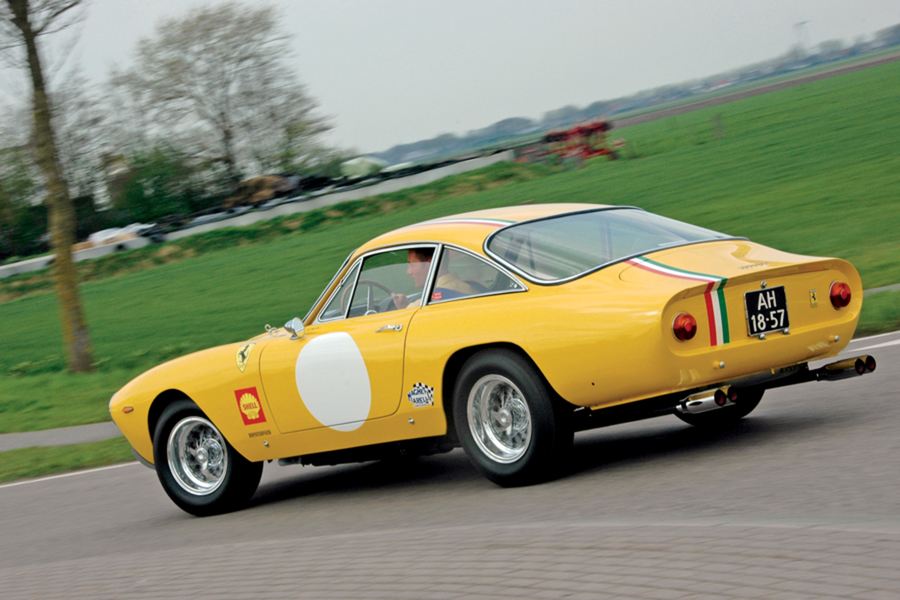 Behind the two seats is a leather-covered luggage area with two retention straps. This is the car’s main stowage location, since the trunk is filled with a spare wheel, tool kit and the fuel filler in the right corner.

We’re soon on our way. There’s no shortage of photo locations in this part of The Netherlands: Small country roads, old farms and grass fields with cows and newly born lambs are everywhere. We soon find a suitable site, and as I prepare my camera, Kroon tells me more about his car’s history.

After its time in Germany, s/n 5487 was brought to Sweden, where it was photographed with Battista Pininfarina and where, in 1970, it was rolled and badly damaged. The Lusso was then bought by Tom Trana, a famous works rally driver for Volvo and Saab. He repaired and overhauled the Ferrari, and drove it on many road rallies in the early ’70s. It changed hands in Sweden a few more times, then was again involved in a road accident in 1983. 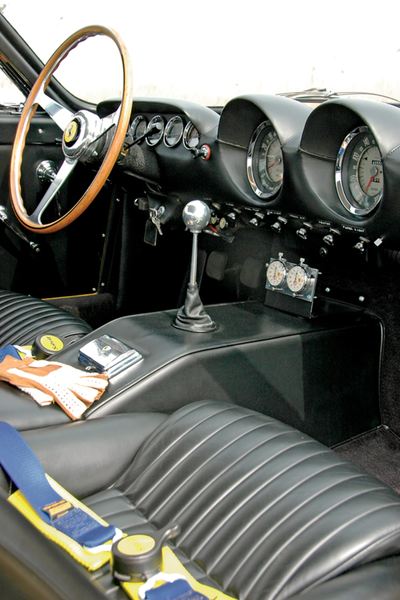 In ’87, it was bought by Gunnar Pettersson, who sent the car to Italy for a ground-up restoration by Carrozzeria Autosport (Bacchelli & Villa); at this time, the Lusso, which was originally silver, was painted yellow. Pettersson owned the car for more than ten years, during which time he attended Ferrari’s 50th anniversary celebration in 1997.

In 2000, s/n 5487 found a new home in the collection of Dutchman Edgar Schermerhorn. Kroon became the next owner a couple of years later. “Every time I get behind the wheel and start the engine, I get a smile on my face,” he says. “I’ve used the car in several Ferrari events, such as the Dutch part of the Ferrari 60 Relay in 2007, and I am planning to compete in events as the Tour Auto, Targa Florio and Modena Cento Ore in the near future. In the meantime, I love driving these quiet country roads, so let’s do that again.”

WE HOP INTO THE LUSSO and drive slowly as the oil temperature rises. “The first miles you have to be patient and give the engine some time to warm up,” says Kroon. “But then it’s time to have some fun!” 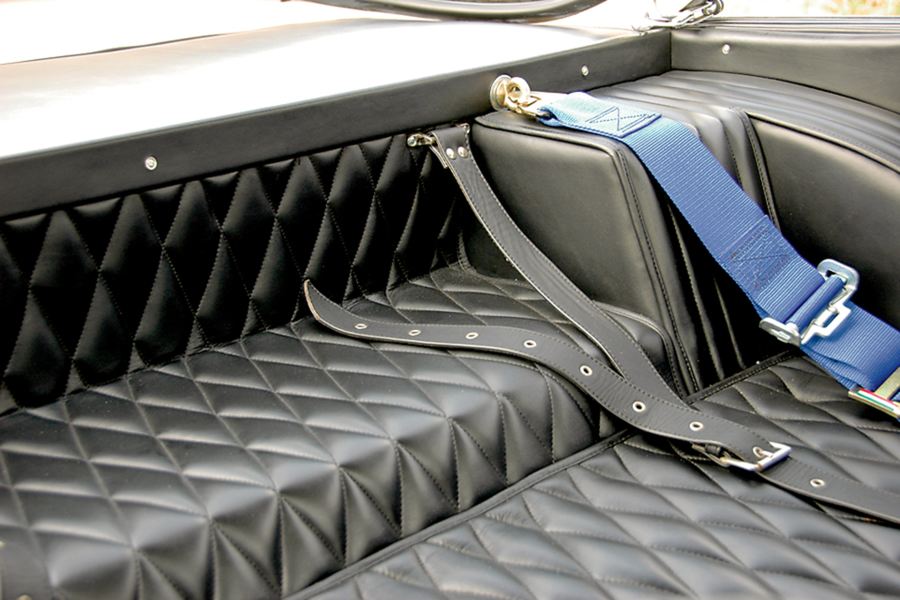 He stomps on the gas. The Lusso’s nose rises, as does the tachometer needle. I can hear the Webers sucking air into the suddenly screaming engine. “With these carburetors, it’s a complete different car above 5,000 rpm,” Kroon shouts happily. “Its output is now rated at approximately 300 bhp. If you run the Lusso to 6,500 or 7,000 rpm, the engine produces a huge roar, you really think it will explode! But of course it doesn’t. The Snaps exhausts I later fitted complete the picture. They produce a nice, darker sound, and they look good, too.”

The roar of the 12 cylinders is fantastic, and much credit must go to the new carburetors. “When it still had three carbs, the engine sound was less spectacular, more discreet,” he adds. “It still was very fast though, but less racy and not as throttle-happy as with the six carbs. To get the right setup isn’t an easy job, and the engine is still a bit nervous at low revs, but a lot of fun above 3,000 rpm. You have to keep up the pace; that’s what it likes, and so do I.”

Kroons says nothing more, paying attention to the road ahead, but his face tells the story. S/n 5847 really is a lovely Lusso. 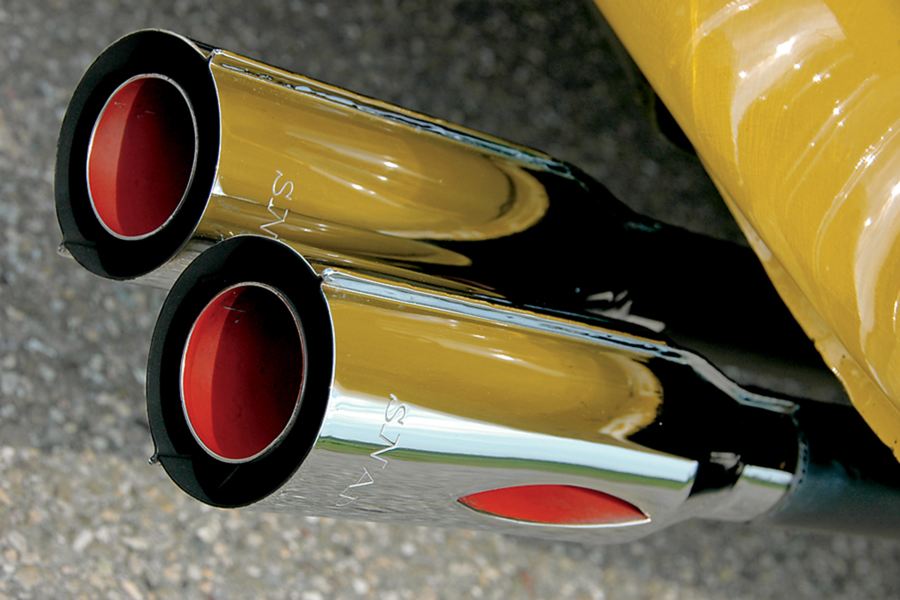 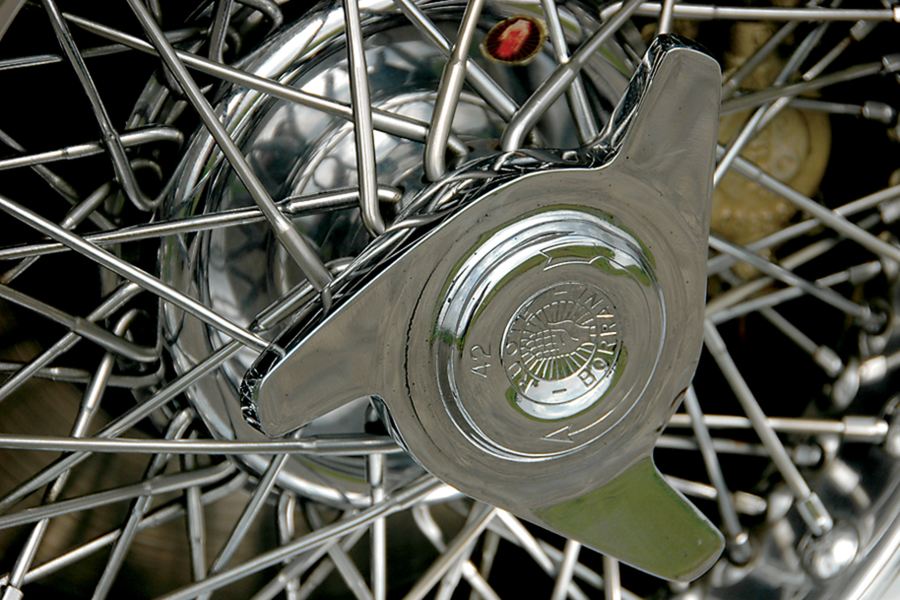 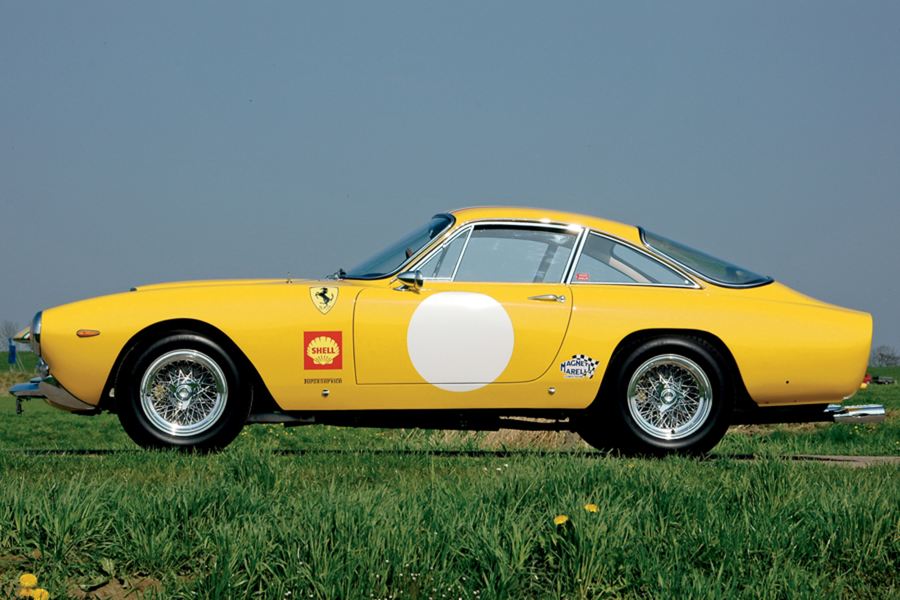 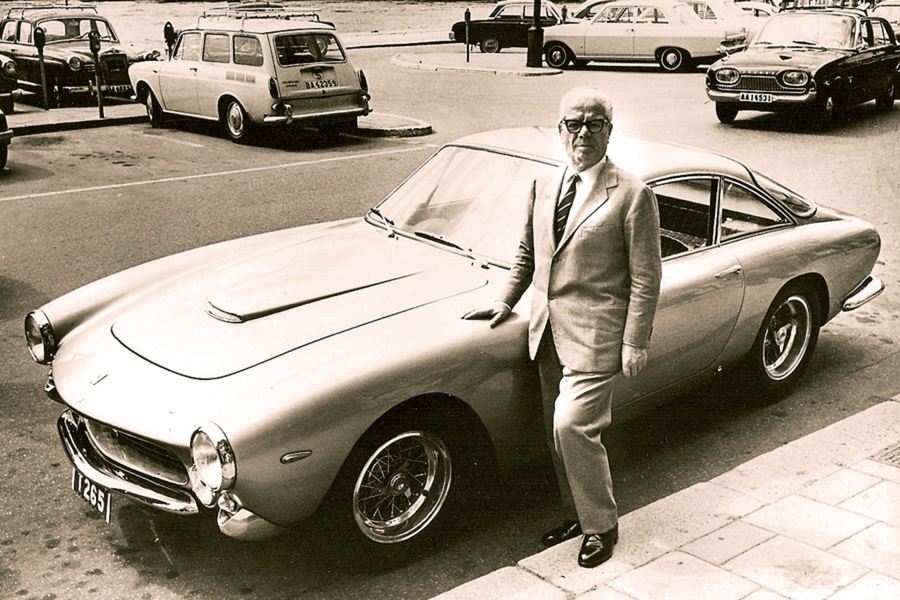 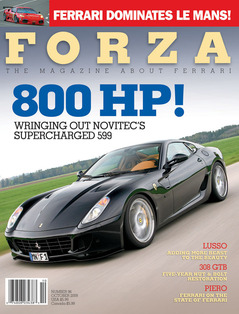