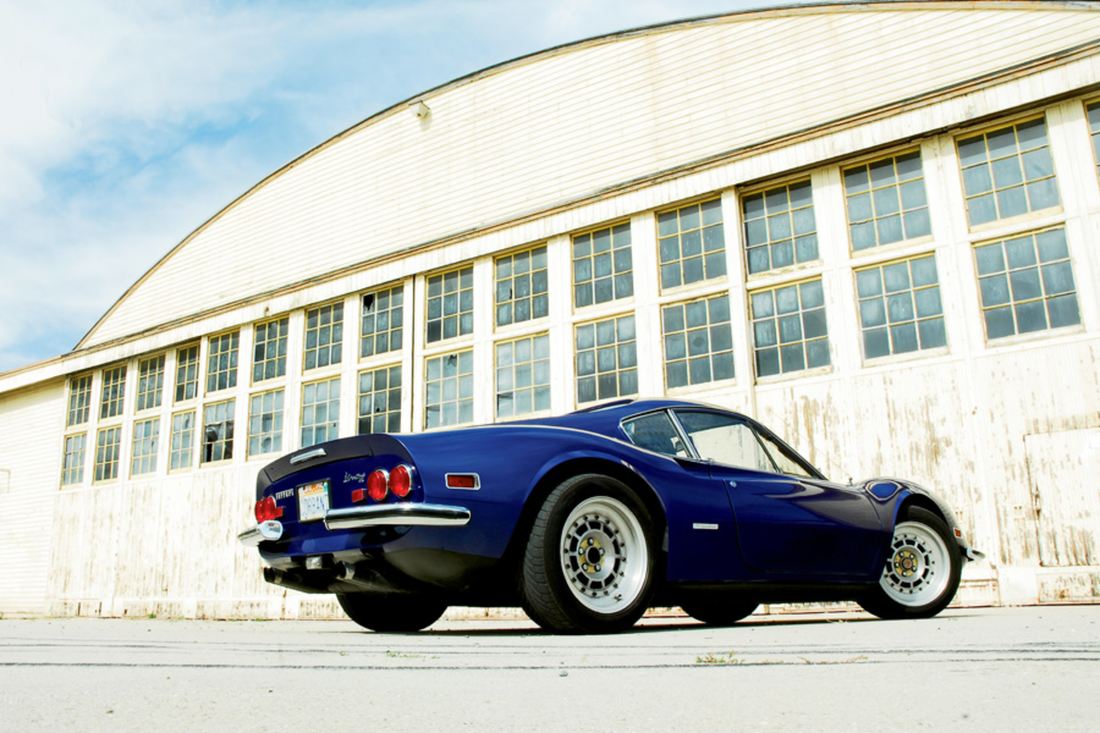 Ask owners of vintage Ferraris how often they drive their cars, and the answer will usually be somewhere between “occasionally” and “regularly.” It’s pretty rare to find someone who drives an old Ferrari every day, and almost unheard of that such a car is someone’s sole mode of transportation. But that’s exactly the case with enthusiast John Corbani.

Over the 21 years Corbani has owned his 1972 Dino 246 GT (s/n 04504), the Santa Barbara, California resident has used the car not only as a daily driver, but as a veritable workhorse. He has no compunction about using it to haul pool chemicals, fertilizer and grass seed, or make a run to the grocery store for some last-minute dinner ingredients.

The Dino has even been used to tow an ailing riding lawn mower up a hill at the Hidden Oaks Country Club, where Corbani, who retired in the early ’80s from a career as an electronics engineer, serves as the self-described “owner/manager and fix-it guy.” And did we mention that the car has over 190,000 miles on the clock, 150,000 of those added by Corbani himself? 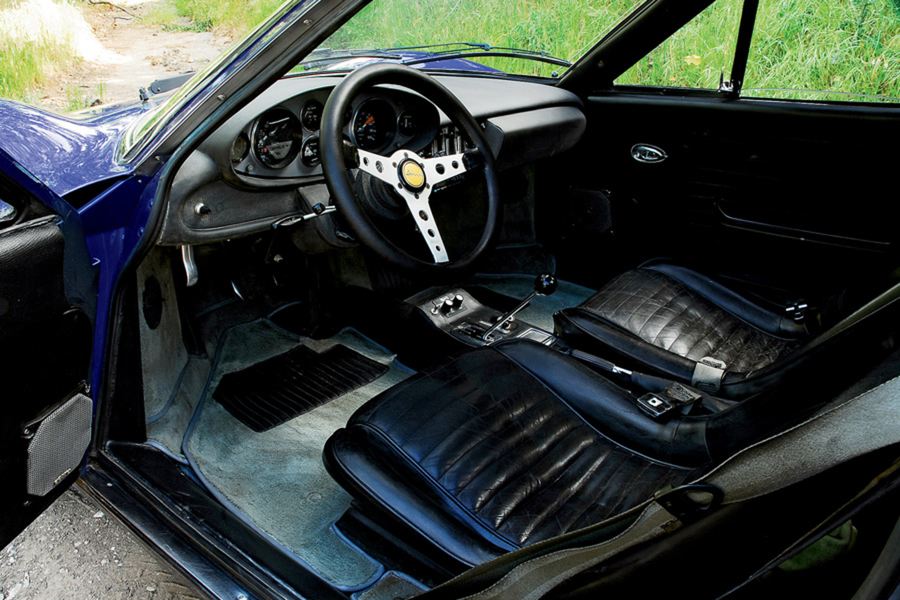 CORBANI’S JOURNEY WITH THE DINO began in 1986, when he spotted it at a used-car lot in Santa Barbara. At the time, he was driving a ’67 Alfa Romeo Sprint Speciale, the latest in a string of Alfas that had followed a series of MG TDs. But the 246, which was then painted white, attracted his attention like no other car before. Corbani drove by the lot for several months as the Dino—one of 2,732 GTs, out of the 3,761 total 246s that were built from 1969 to 1974—sat unsold.

“I finally could not stand driving by it any more, and stopped and asked the price,” he recalls. “It was only $30,000, which sounded reasonable. I asked to drive it, and after 15 miles I was hooked.”

When he returned from his test drive, Corbani traded his Alfa for the Dino and never looked back. “The rest is history,” he says. “My wife and kids couldn’t figure out why I traded a beautiful red car for a boring white one, but I just smiled.” 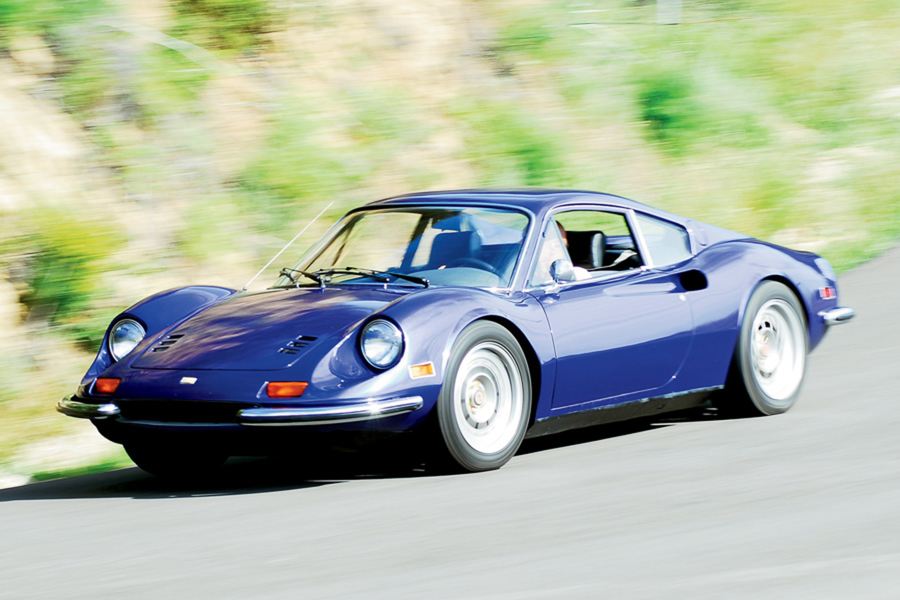 Though Corbani isn’t intimately familiar with the 246’s history before he became its caretaker, the used-car dealer told him the previous owner had raced the car in the San Francisco Bay Area. That fact may explain why the Dino wears 8 and 8.5×16-inch lightweight Gotti three-piece wheels in place of its original 14-inch Cromodora alloys.

While the Gotti wheels elicit disapproving finger wags from Ferrari purists, their larger-than-stock diameter and width allow for a broader choice of rubber. Currently, the Dino rides on 205/55 front and 225/50 rear Kumho Ecstas. “I get about 30,000 miles in front and a little more in the rear,” offers Corbani.

Like the Alfa before it, the otherwise stock Dino was put into service as a daily driver. Unfortunately, a major mechanical problem immediately reared its head. “I discovered green water by the number-six cylinder,” Corbani says. 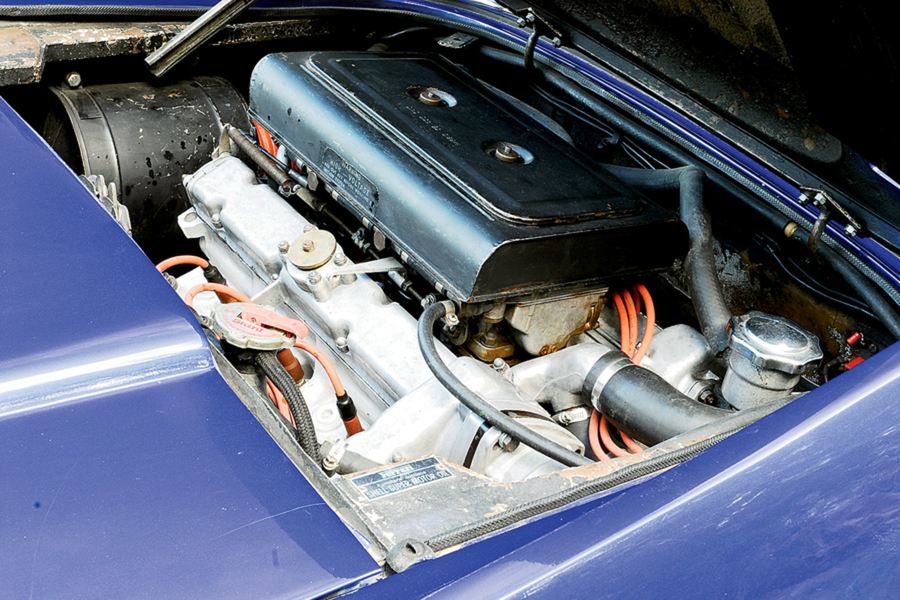 Coolant leaking out of a head is never a good sign, and, sure enough, it turned out that one of the head studs had broken. “But $3,000 later, the stud had been replaced and all was good with the world,” he says.

As often as is possible, Corbani works on the Dino himself, under the carport where it is parked when not being driven. “About 50,000 miles after the head stud pulled, I did the valves in both heads,” he says. “The motor was later rebuilt, in 2004, when it had 181,000 miles, though I turned that job over to the professionals. It was burning one quart of oil per tank of gas, so I figured it was time, before something let loose.”

Unfortunately, the mechanic who rebuilt the engine did a sloppy job, and the V6 leaked oil afterwards. “I drove it for 4,000 miles before I bit the bullet, pulled the engine, tore it down and had it put back together right. There was nothing wrong with the mechanicals, just the workmanship. Everything else was small, and I did it all myself. I’ve probably spent about $30,000 for maintenance over 21 years.” 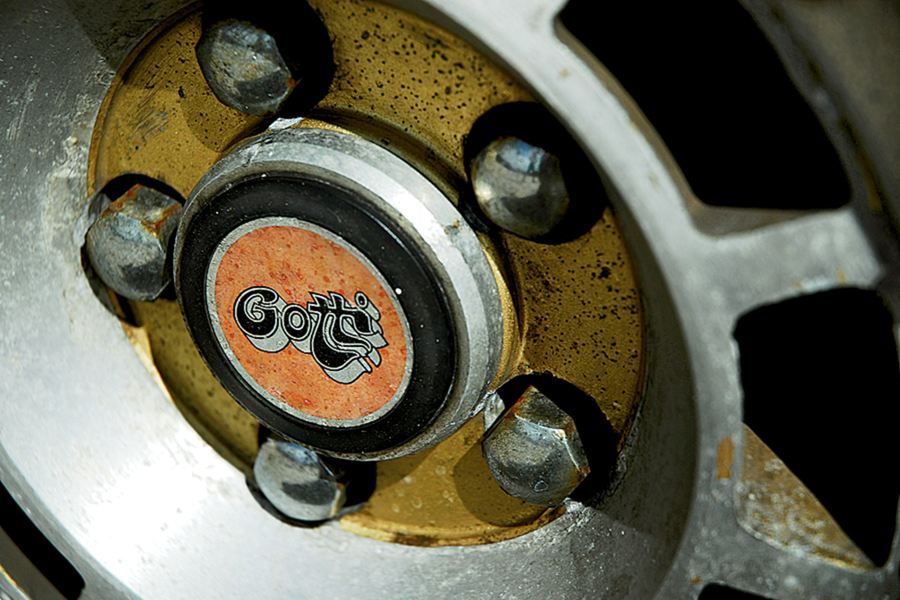 CORBANI HAS MADE A FEW CHANGES to the 246 during that time. The original Dinoplex ignition was replaced with a Perma-Tune unit. The air-conditioning compressor was removed, and the oil breather system was simplified by removing one of the two oil-filler caps and the breather hose that connected the two. Since the Dino’s days of having to pass an emissions test are over, the car’s air pump and smog equipment were removed, as well.

The most noticeable change is to the exterior color. Over the years, the Dino has been involved in its share of traffic accidents. The car’s height, or lack thereof, is Corbani’s biggest complaint about the car: “Folks can’t see a car that low, so they keep backing into it,” he laughs, ruefully.

With the Dino in the body shop for major repairs following an encounter with an SUV, Corbani decided it was a good time to change the car’s white paint to something a little more eye-catching. “I remembered seeing a metallic blue Dino back in ’74, and I had never seen a prettier car,” he recalls. “Since the other guy’s insurance was paying to fix and repaint the car, I sweetened the deal for the body shop, had them strip the whole car and paint it Midnight Blue Metallic.” 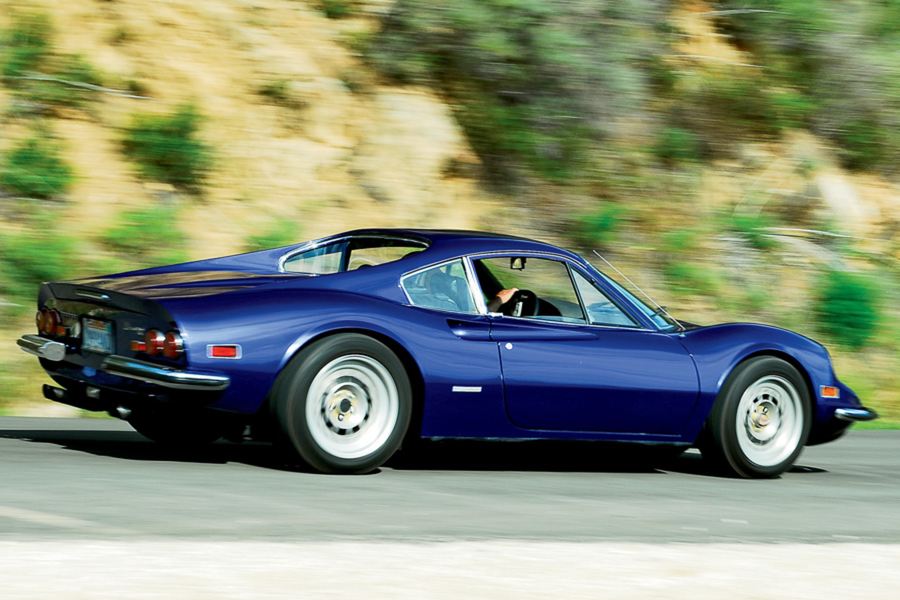 Life with the Dino isn’t all fender-benders and carrying pool-cleaning supplies, of course—Corbani gives the car regular workouts on the back roads that crisscross the hills above Santa Barbara. “The Dino is in a class of its own,” he opines. “It fits me perfectly. It rewards finesse, with just enough power to run fast on the road, and it will out-corner most anything at lower speeds. Taking a high-speed sweeper with the tires singing is about as good as it gets.”

Rather than just describe the experience, however, Corbani graciously offers us the keys for an afternoon drive. Needless to say, we readily accept.

ONCE WE’VE DROPPED INTO THE LOW-SLUNG DINO’S cozy interior, we’re greeted by a three-spoke steering wheel and white-on-black instruments arrayed in an oval housing. But the word that immediately springs to mind is “patina.” Everywhere we look, from the dried leather of the wheel to the dashboard, which is long-since devoid of the “mousehair” covering it left the factory with, this car proudly displays its years of constant usage. 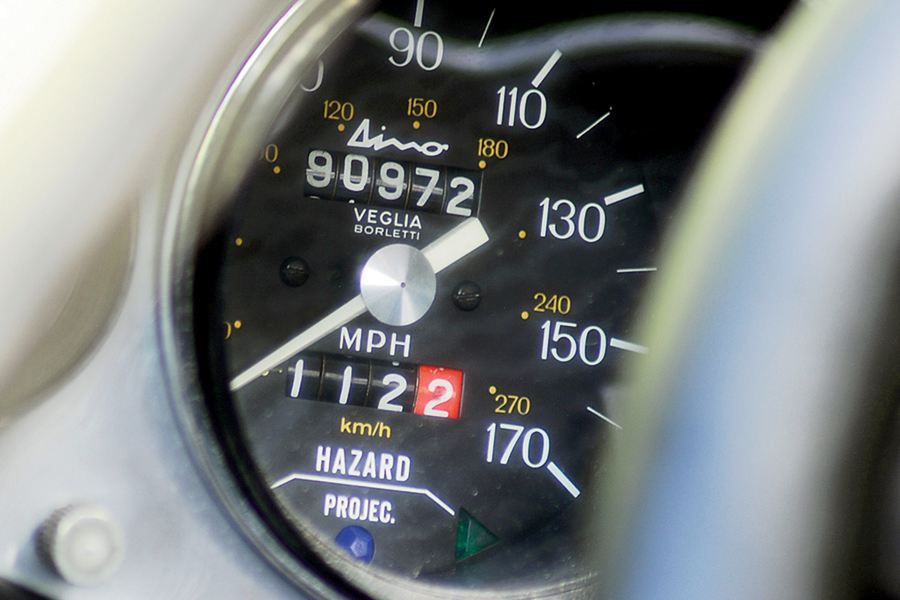 With a twist of the ignition key and a jangle from the starter, the Dino’s 2.4-liter V6 comes to life with a symphony of sounds. When we depress the throttle to clear the engine’s lungs, we hear the Weber carburetors inhale and a hollow burrup exhale from the exhaust; there’s also a distant fizz and rattle from the camshafts’ timing chains. The GT’s coupe configuration seems to exaggerate the various noises compared to the targa-top GTS version we drove back in 2005 [“Even Better Than the Real Thing,” FORZA #63].

The five-speed dogleg shifter slots into gear with an oily, well-used feel (the original gearbox has never been apart), and the medium-weight clutch proves easy to modulate. As we make our way through residential areas toward some good driving roads, Corbani has only one request: Don’t use second gear until the fluids are thoroughly warmed up.

The steering is light enough to make around-town driving easy. In fact, the Dino is the easiest Ferrari from its era to simply tool around in. 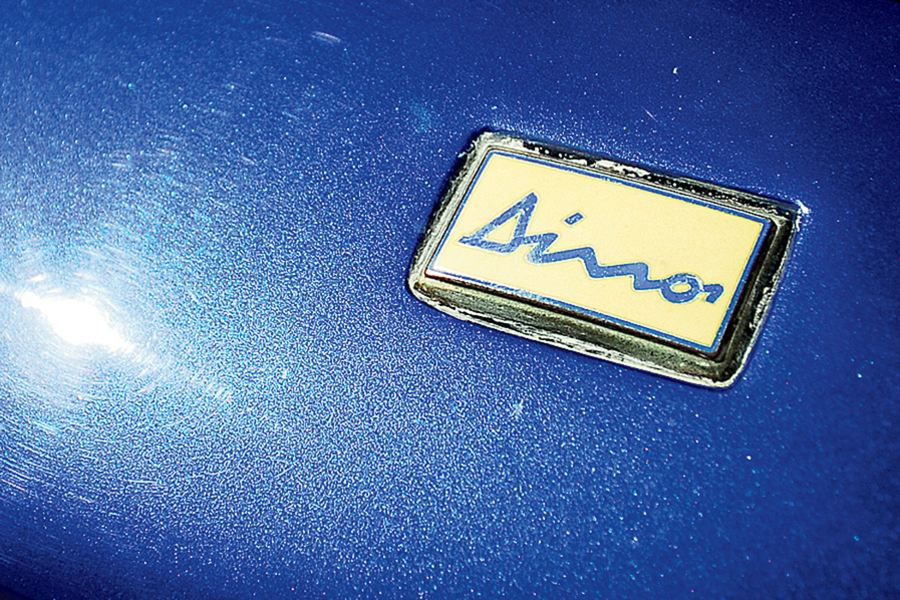 After a few minutes, we pull onto Highway 101, and Corbani waves us into the fast lane, a surefire way to get the car quickly up to operating temperature. The 246 cruises happily at 90 mph, and planting the throttle at that speed produces spirited acceleration.

In 1972, the year Corbani’s car was manufactured, Ferrari claimed the Dino’s aluminum-head/iron-block V6 pumped out 195 horsepower at a lofty 7,800 rpm, with 167 lb-ft of torque at 5,500 rpm. Some 35 years later, this car is certainly quick enough to run with modern traffic.

The Dino really comes into its own when we reach the winding canyon roads that look out over the azure Pacific Ocean. At lower rpm, the V6 thrums loudly, while the ever-present gearbox whine adds a dose of competition breeding. As the revs rise, which they do quickly, the 246’s song hardens, the burble quickly transforming into a yowl that spills enthusiastically from the quad Ansa exhaust tips. Acceleration isn’t strong by modern standards, but the V6 is an absolute jewel of an engine. It’s a good thing it revs so willingly, though, since we need to keep it spinning above 5,000 rpm in order to make quick progress.

We guide the Dino around curve after curve, our right hand dropping from the angled steering wheel to the black plastic shift knob as we grab up and downshifts that slot home with a very gratifying thwick-thwack. After a dizzying succession of turns, we’ve worked up a terrific rhythm, the Dino shrink-wrapping itself around us. Better still, the view through the wraparound windshield, past the fenders that arc up dramatically on either side, is one of the best in all of auto-dom.

Thanks to its mid-engine layout, the Dino changes direction very quickly, and settles into a nicely neutral stance once the suspension rolls a little. Compared to the aforementioned GTS, the GT feels a little more planted and stable, particularly through faster sweepers. In tight turns, the GT’s steering is a bit heavier and less responsive than the GTS’s. It’s hard to know how much of a role the fixed steel roof plays, as both traits are at least partially attributable to this particular car’s larger footprint.

While the wider rubber does remove some of the Dino’s delicate steering feel, it also reduces the car’s nervousness, which increases our confidence during aggressive driving. The four-wheel disc brakes, though not as strong as those on a modern car, are well matched to the rest of the 246’s abilities—plus, the wider tires improve its stopping power.

Corbani’s Dino is definitely the most well-used Ferrari we’ve come across. It looks like there’s no end in sight, either, since this is the last car he’s going to buy. “I plan on keeping it forever,” he enthuses. After experiencing this 246 for ourselves, we can see why. 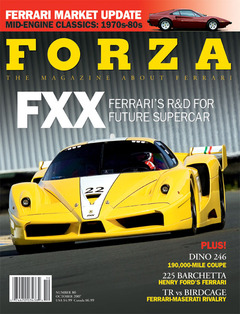