Ferrari developed the all-new California to lure GT buyers away from other marques. 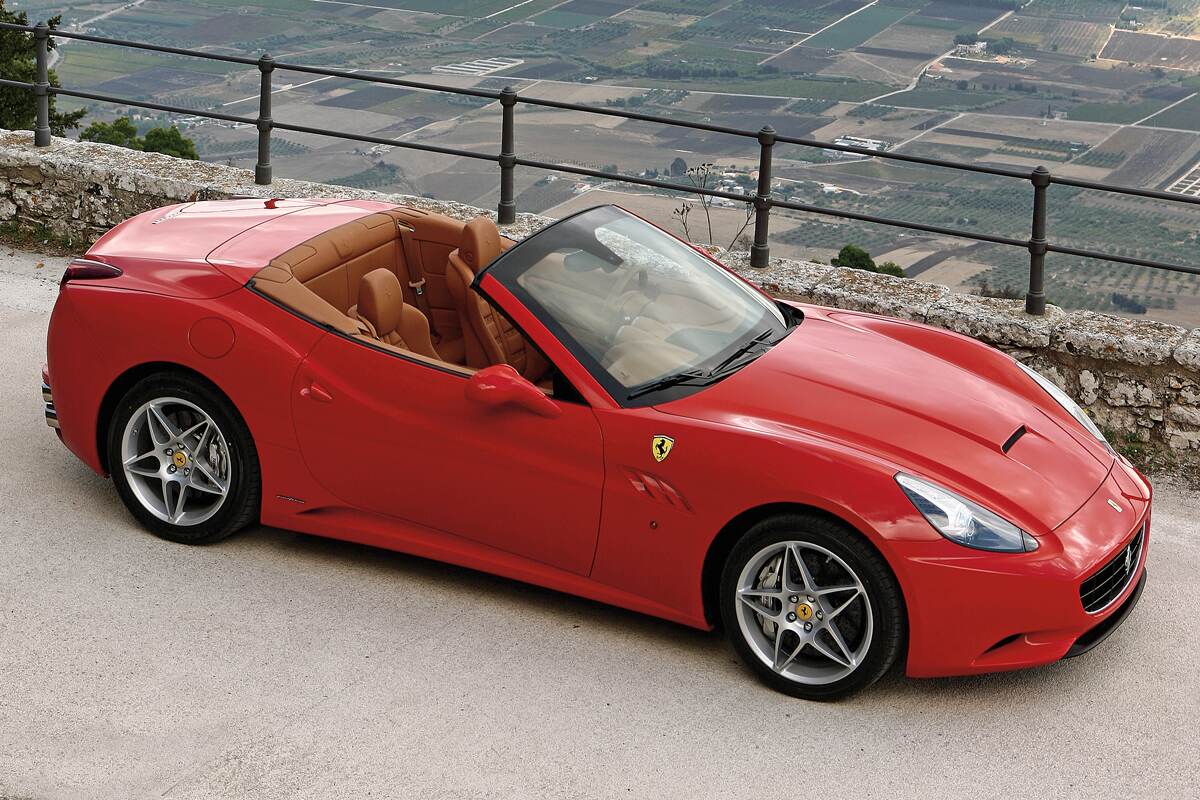 The 1990s saw serious change sweep through Ferrari’s lineup. The 456 replaced the ancient 412, the long-running Testarossa family made way for the front-engine 550 Maranello, and, late in the decade, the 360 Modena introduced the company’s now-standard aluminum chassis. With three main model lines—a V12 sports car, a V12 GT, and a V8 sports car—Maranello’s stables looked comfortably full.

Company CEO Luca di Montezemolo didn’t think so, however. He believed there was room for a fourth model line, one that wouldn’t compete with the others. Indeed, it wouldn’t even be aimed at Ferrari’s traditional customers; instead, it would lure buyers away from the likes of Aston Martin, Bentley, and Mercedes. Montezemolo’s vision debuted at the 2008 Paris Auto Show, when Ferrari introduced an all-new hardtop convertible: the California.

In trying to widen its reach, Maranello suddenly found itself deluged by criticism from all sides. The company was accused of everything from selling out its heritage (the new car’s name and retro hood scoop were an homage to the legendary Cal Spyder), poor design (particularly the plump rear end required to hide the folded roof), and the new model’s intended “non-enthusiast” buyer.

Such complaints aside, the California was a proper Ferrari where it counted. Like its stablemates, the car featured all-aluminum construction, a flat-plane crankshaft, and carbon-ceramic brakes. Despite being the least-powerful pony in the lineup, it was the most sophisticated, being the first model to receive a seven-speed dual-clutch gearbox, multi-link rear suspension, and direct fuel injection. Other firsts included a front-mid-mounted V8 engine, front and rear subframes to carry the mechanical components, and, of course, that exotic roof.

Then, once people had a chance to drive the California, they discovered it wasn’t bad at all. To the contrary: The automotive press almost universally praised the newest Prancing Horse’s speed, refinement, comfort, and practicality. The vestigial rear seats—so small that Ferrari described the car’s layout as 2+ instead of 2+2—weren’t sized for real people but proved excellent for additional storage (as did an optional rear bench). To Montezemolo’s delight, the car captured its hoped-for conquest audience: Seven of ten California buyers were new to the marque.

At the 2012 Geneva Auto Show, Ferrari unveiled the mechanically updated California 30. (Though unofficial, the “30” moniker is used by the factory and dealers alike.) Compared to the original car, the Cal 30 produced 30 additional horsepower and weighed 30 fewer kilograms. Also new, and popular, was the optional Handling Speciale package, which improved the car’s reflexes with little penalty in ride quality.

Two years later, Ferrari unveiled a more serious version: the California T. Beyond the more aggressive bodywork (including a noticeably slimmer rear end) and revised interior, the T boasted a twin-turbo V8—the first turbocharged engine to come out of Maranello since the F40. More significant than the 70-hp gain over the Cal 30 was a 184 lb-ft increase in torque, and despite this boost (no pun) in performance, the Cal T proved to be a better, more comfortable touring machine than its predecessors.

The California quickly became Ferrari’s best-selling model. As a result, used examples are both plentiful and relatively affordable today. Add in the car’s impressive reliability, performance, and all-around usability, and this is one Ferrari that’s easy to recommend.

With the 2008 California, Ferrari designed its first true mass-market, high-volume model. Marketed at a sub-$200,000 price point, the California was aimed squarely at buyers who were more attracted to luxury and usability than ultimate performance. As the company’s Director of Product Development, Massimo Fumarola, put it, “California buyers like to go away for the weekend. They have kids, and they like the versatility of the car. They are looking for a sports car, but the F430 is too much.”

The California eventually became the success Ferrari hoped for, but it wasn’t a smooth ride. The model was introduced just as the economy tanked (remember Lehman Brothers?), the long list of ubiquitous options pushed window stickers well above $200,000, and many customers were disappointed to discover the rear seats proved pretty much useless for human habitation. Total sales over the first three years were only around 8,000 units, but production climbed as the economy recovered, particularly when Ferrari introduced the lighter, more powerful California 30 in 2012.

In 2014, Ferrari upped the ante once again with the turbocharged California T. Production continued until the debut of the all-new Portofino in 2018. 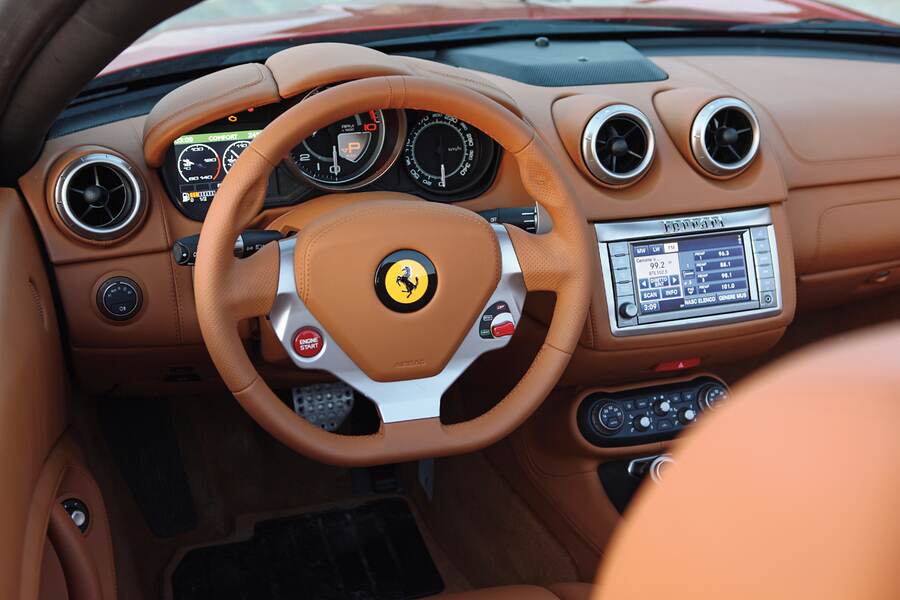 Thanks to the miracle of depreciation, the arrival of a newer and faster model every few years, fresh examples coming off lease all the time, and numerous cars for sale every day, today’s market tilts firmly in the buyer’s favor.

Whichever model you’re interested in, take your time and find the right example. With hundreds for sale at any given time, you can afford to be picky. —Michael Sheehan 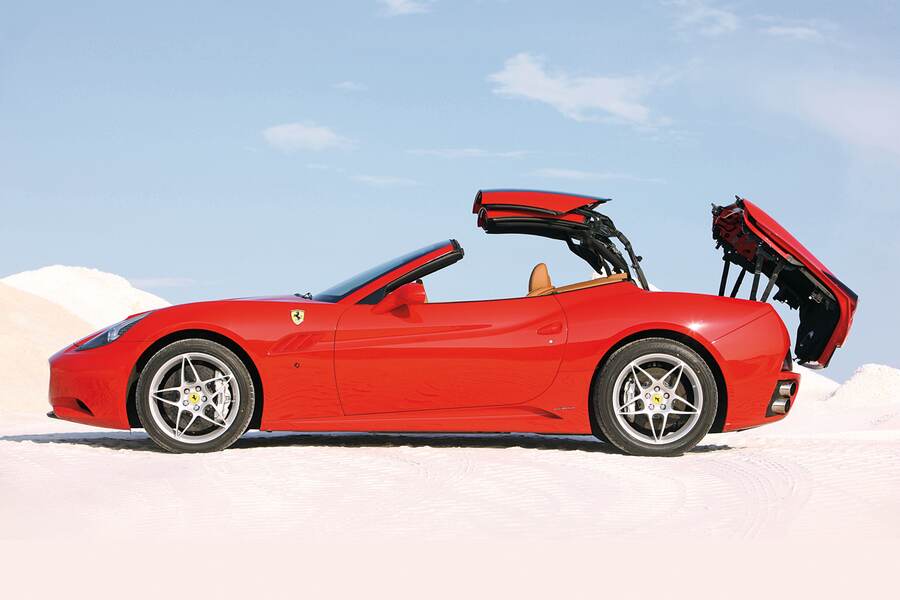 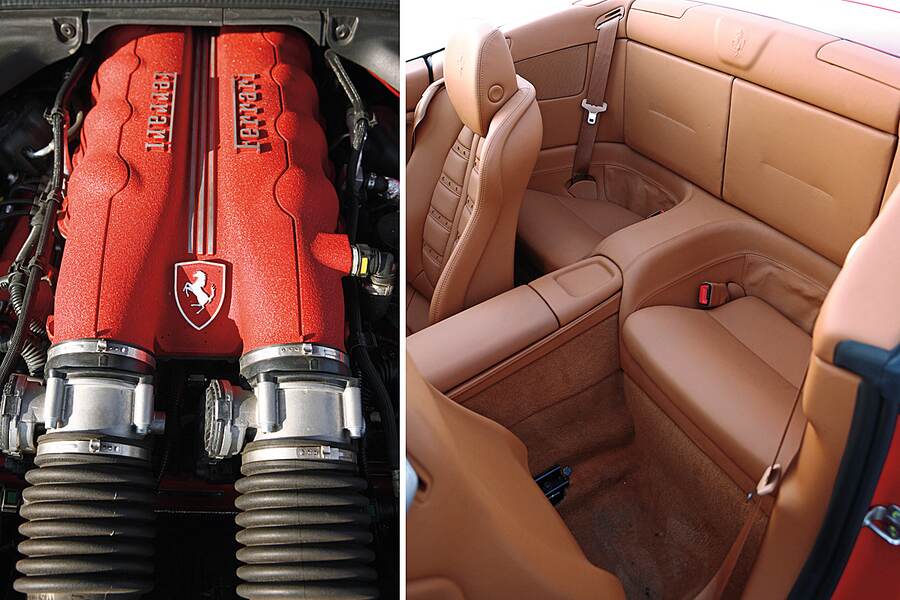 These prices are for fully serviced cars in good-to-great condition as of February 2021.

After speaking with service managers at several authorized Ferrari dealers, as well as a few mechanics at independent shops, the consensus on all the California variants is that they are practically bulletproof. How else to describe a car that’s most common problem is a dead battery caused by infrequent use?

Overall, the California is as rugged and reliable as one can hope for in a low-volume exotic. As with any such high-tech car produced in small numbers, however, isolated problems do arise, most often in the form of electrical gremlins, such as random warning lights and dead fan relays, as well as the occasional failed instrument panel. Early examples did have a handful of more serious teething problems, but any such issues should have long since been resolved under warranty. Occasional issues with leaking dual-clutch gearboxes have cropped up as the cars have gotten older, and, as with other Ferraris, the leather on the California’s dashboard can peel away from its backing if the car regularly sits in the sun.

Servicing costs are pretty painless for an exotic. The once-dreaded cam-belt replacement is now a thing of the past, as both the normally aspirated and turbocharged V8s utilize a timing chain. In addition, in 2012 Ferrari introduced a free seven-year unlimited-mileage maintenance program that covers the usual fluids and filters (if not wear parts like clutches, tires, and brakes). 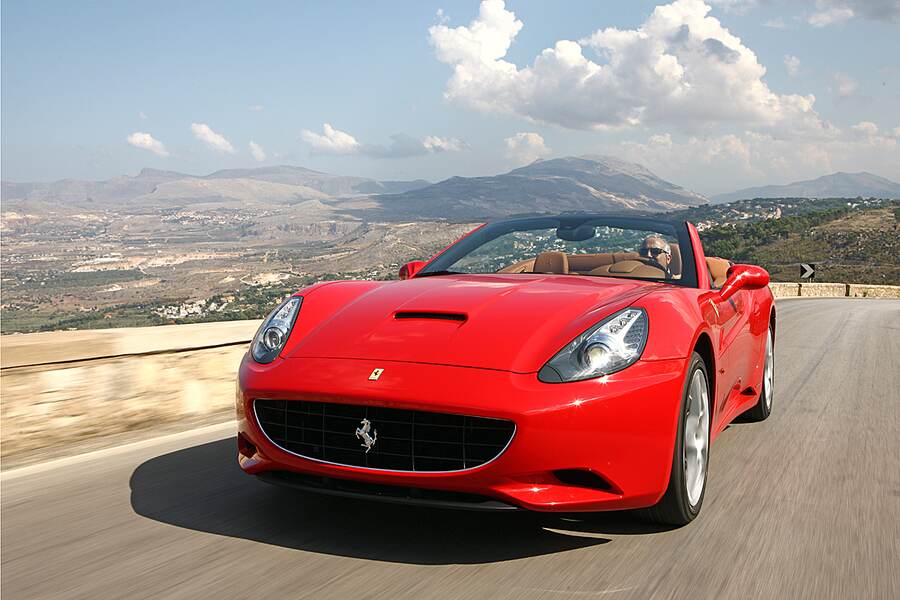 Ferrari’s new-car warranty lasts for four years, after which an extended warranty is available through the dealer network. Unusually, this warranty is good for only one year, must be renewed annually, and its price is determined by the dealer based on a particular car’s condition, mileage, and so on. Unusual or not, the warranty could be a life saver since some major components, such as the folding-top assembly, have to be replaced as complete units—a repair that’s likely even more expensive than it sounds.

Fair warning: Before lowering that complex folding hardtop, it’s crucial to prepare the trunk, putting a moveable cover into place and making sure everything fits inside the allowable area. Some owners have damaged their car’s roof by lowering it when an object was sticking through the truck pass-through, or simply when the trunk was too full. —Michael Sheehan

It’s no sports car, but the California delivers a fantastic GT driving experience. Here’s some of what we said about the model when it was still in production.

ON THE ROAD, the new California is a marvel of docility and civility, completely at ease commuting through stop-and-go traffic, running mundane daily chores, or cruising down the highway. But when I get on it in anger, the car shoots deep into triple-digit speeds with ease.

The California is deceptively quick, so seamless is its acceleration. The V8 pulls with one long elastic whoosh of thrust to its 8,000-rpm redline; there is no hint of peakiness.

My favorite aspect is probably the steering. The turning radius is tight and turn-in is superbly crisp, yet the Ferrari never feels nervous regardless of speed.

Indeed, the California always feels completely unflappable. Whether I’m going fast or slow, everything remains placid and serene, with the world and its troubles held at arm’s length. This is quite likely the best all-around car Ferrari has ever made, a perfect successor to the 330 GTC, 365 GTC/4, Mondial t, and 456. It is truly brilliant in its own unique way. —“Generational Divide,” FORZA #110

The California 30 feels noticeably sharper when I get on the gas compared to the original. The two tenths of a second drop in 0-62 mph time actually represents a major improvement in terms of acceleration; this car is seriously quick. Ferrari claims a near 200-mph top speed, and while I didn’t try that out, I can report that third gear is always good for a quick-and-easy, and truly glorious-sounding, 120 mph.

In terms of handling, the Handling Speciale setup really delivers the goods. Ferrari’s claim of reduced body roll is spot-on, and the California 30 handles more confidently than the first-gen car. There’s also a bit more steering feedback and road feel than before. The car lives to run, loves to attack, and does a far better job of telling you what it’s up to than its predecessor. —“Going Back to Cali,” FORZA #127

IT’S THE TORQUE transformation that’s the big story here, the total now standing at 556 lb-ft, up from 372 lb-ft before. In reality, it’s a little more complicated than that, because the full 556 lb-ft is only available in the seventh ratio of the mandatory dual-clutch transmission. Punch the right pedal in any of the first three gears, and you’ll have a maximum of 450 lb-ft to play with, which climbs only to 479 lb-ft in sixth.

The turbo V8’s extra torque makes itself felt as I cruise around Tuscany at part throttle, dispatching the gentle inclines woven into the rolling fields with far fewer gear changes and much greater ease than in the previous California. But when I push the throttle wide open, a very different picture emerges: The F1 transmission snaps down three gears in Automatic mode, the engine note hardens and, rather than plateauing, the kick in the back just keeps kicking. Although the throttle response is instant, I can feel a slight delay as the turbochargers spool up—but it’s a brief pause, and from that moment on, all hell breaks loose. 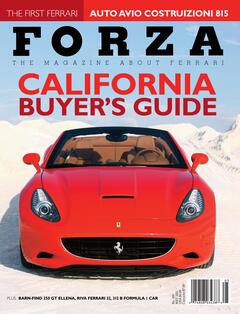