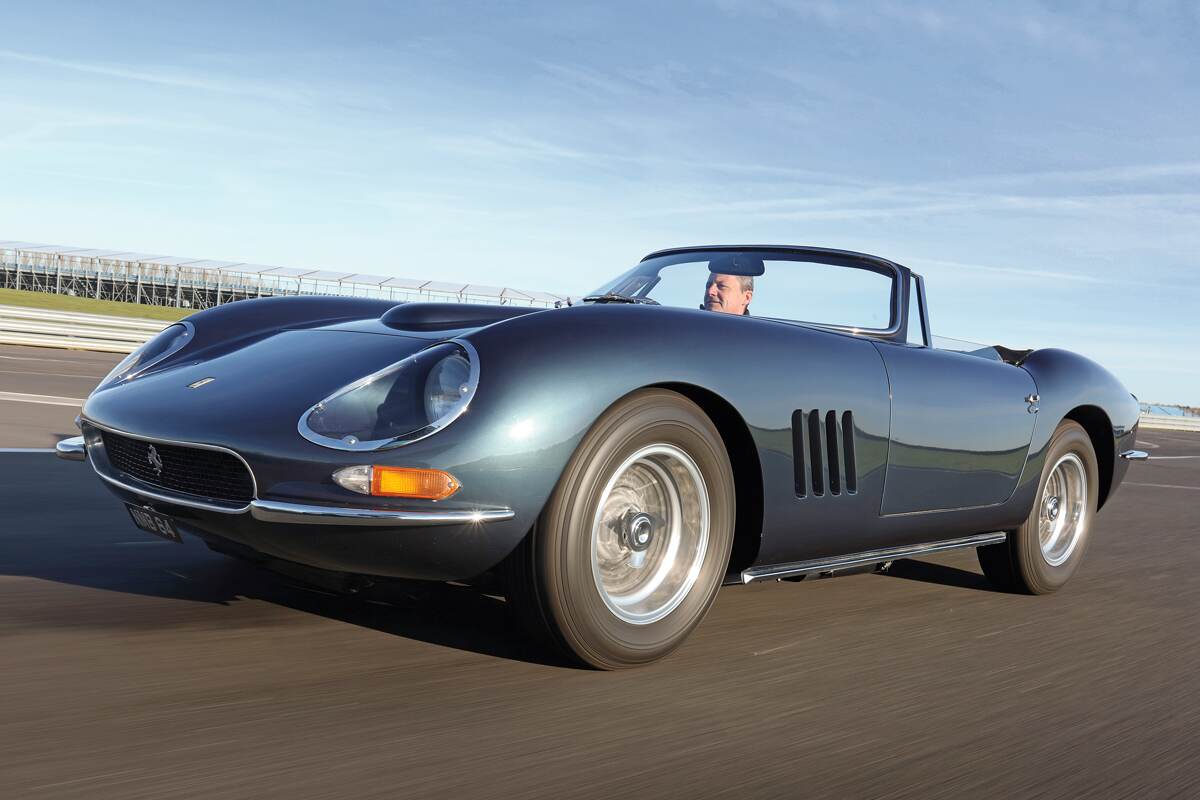 On March 29, 2017, at the H&H Classics auction held in the Imperial War Museum in Duxford, England, this Nembo Spider sold for £596,250, which was roughly $745,000 at the time. The Ferrari was being sold on behalf of its late owner, Richard Allen, who had generously bequeathed the proceeds to the East Anglia Air Ambulance.

Before his death the previous November, the 78-year-old Allen had been a successful businessman, a keen circuit racer and hillclimber, and a proper Ferrari fan. He served as chairman of the Ferrari Owners’ Club U.K. from 2009 to ’14, and in 1987 he founded the Club’s well-supported Ferrari U.K. Hillclimb Championship [“The Hills are Alive,” FORZA #79]. Having witnessed the life-saving work of the Air Ambulance at close quarters some years earlier, when a fellow racer crashed badly, Allen was keen to support it.

At the time of the sale, Patrick Peal, CEO of the EAAA, said, “We are all about changing what could be the last day of your life into one that is merely the worst day in your life. We feel deeply honored to have been the recipient of Richard Allen’s thoughtfulness and generosity. His legacy will be to help us save many more lives.”

It was a generous gift, an exciting day, and an exquisite car. For many, however, the question remained: Who or what is a Nembo? 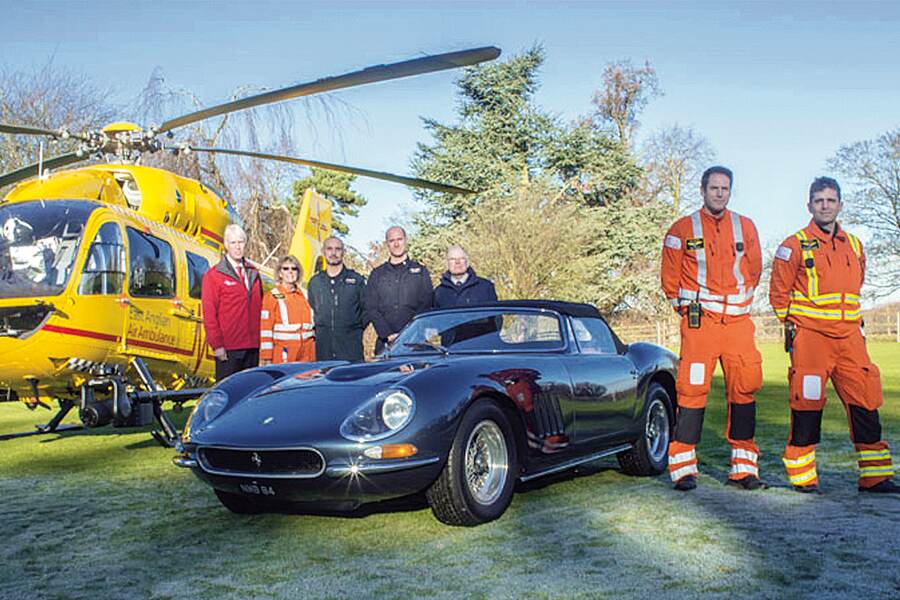 GIORGIO NERI AND LUCIANO BONACINI were gifted coachbuilders and engineers from Modena, who, during the 1950s and early ’60s, worked on and hand-crafted the bodies of many exotic cars. In collaboration with American designer Tom Meade, the pair built two spiders (s/ns 1777GT and 3771GT) and one coupe (s/n 1623GT) on Ferrari 250 GT chassis; these curvaceous machines were christened Nembos, a cocktail of their three names. Neri and Bonacini later parted company, in 1967, with Neri carrying on in his own workshop and Bonacini going to work for De Tomaso.

That looked to be the end of the Nembo story, at least until the late 1980s. In 1988, serious Ferrari collector Martin Hilton acquired a right-hand-drive 330 GT 2+2 (s/n 5805GT) that had been sold new by UK Ferrari importer Maranello Concessionaires to Bill Knott, a businessman and friend of Maranello boss Colonel Ronnie Hoare. The Ferrari wore silver-grey paint, black upholstery, and chrome wire wheels, and the original bill of sale listed it at £5,866—after a £350 discount!

Hilton, who owned such rarified machinery as a 250 LM, a 330 GTO, and a Drogo-bodied 250 GTO, really liked the Nembo Spider, but neither was available to buy. So he tracked down Giorgio Neri, by then 63 year old, and asked if he would build a “continuation” Nembo based on s/n 5805’s chassis, engine, and running gear. Neri agreed, and the 330 GT 2+2 was sent to Italy.

Neri soon got to work, shortening and strengthening the chassis and beating out a beautifully proportioned, voluptuous aluminum body over a wooden buck. The previous Nembos had been bodied in steel, making this one all the more interesting. In the end, however, Hilton left Neri with unpaid bills and an unfinished car. 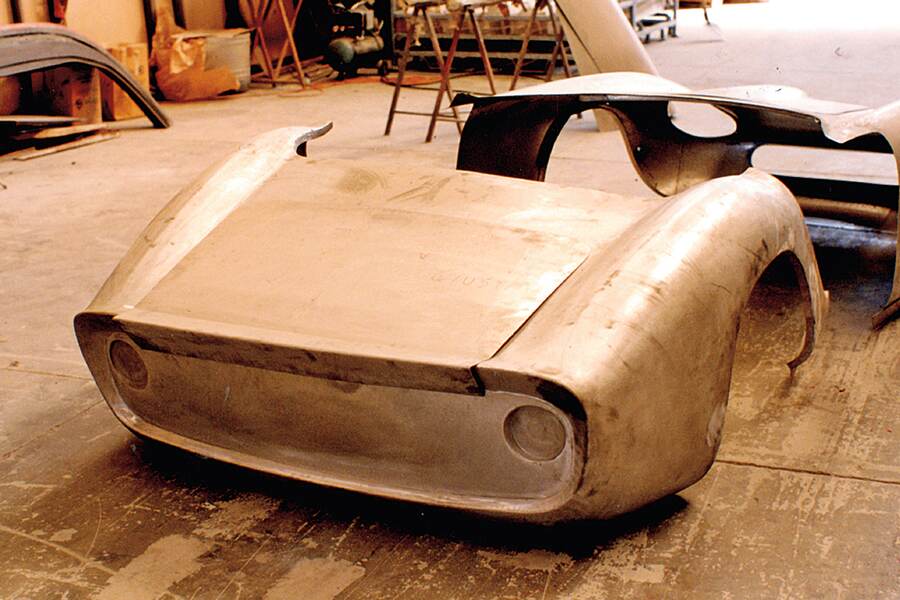 Here’s where the story gets interesting, according to Tim Blackburn, a close friend of the late Richard Allen. “Martin Hilton was a big property developer in the south of England,” recalls Blackburn, “and Richard Allen, who owned a main Ford dealership, also had a leasing and finance company, and he used to lend money to classic-car guys to buy cars. I believe that Allen financed Martin for the 330.”

This meant Allen owned the car until the loan was repaid. However, he didn’t know the Ferrari had been sent to Italy.

“Martin must have bought it quite cheaply, I would think, as a project car,” Blackburn adds. “When he went bust, he turned up at Richard’s office, gave him the car’s keys, and told him for the first time that the car was not in the U.K.”

In 1992, Allen asked Blackburn, who was in Italy on a rally, to find the Ferrari. Blackburn tracked it down to Modena, where he met Giorgio Neri. 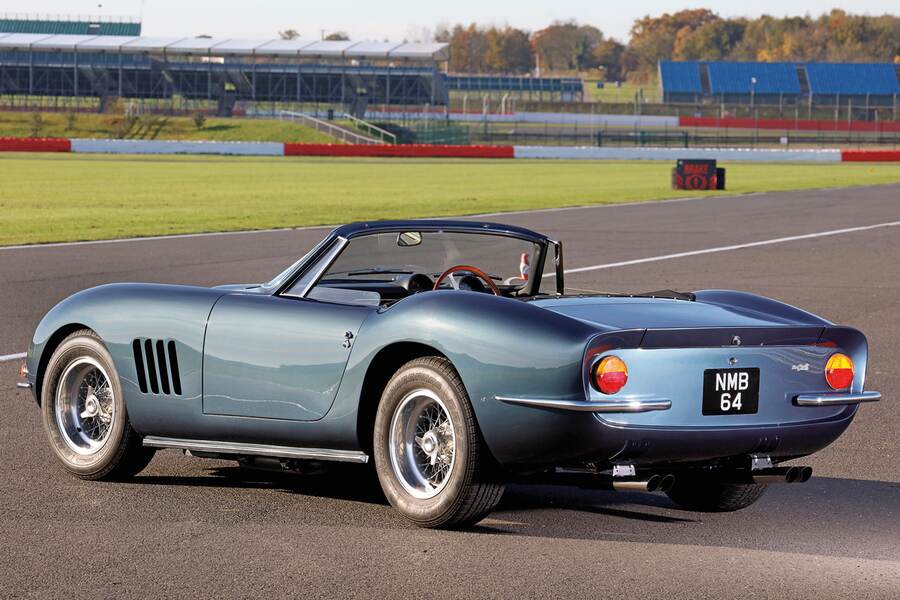 “The 330 was only three-quarters finished,” Blackburn continues. “There was a chassis with the engine and all these panels, which Neri put around the car so we could see what it would look like. All the outer panels were done, but there were no inner panels. I remember the folding roof being a bit of a problem. Neri said there was £25,000 owed on it. I suppose that, if I had paid that, I could have taken the car away with me, but at that time there was a luxury tax on cars being exported out of Italy.”

When Blackburn reported the situation to Allen, the latter decided just to write it off. “He wasn’t really an old-car person, to be honest,” says Blackburn. “He just got lumbered with it.”

Things changed in the mid- 1990s, however, when the luxury tax was eliminated. Allen became interested again, and invited Blackburn to accompany him to Modena—by train, because Allen wouldn’t fly. 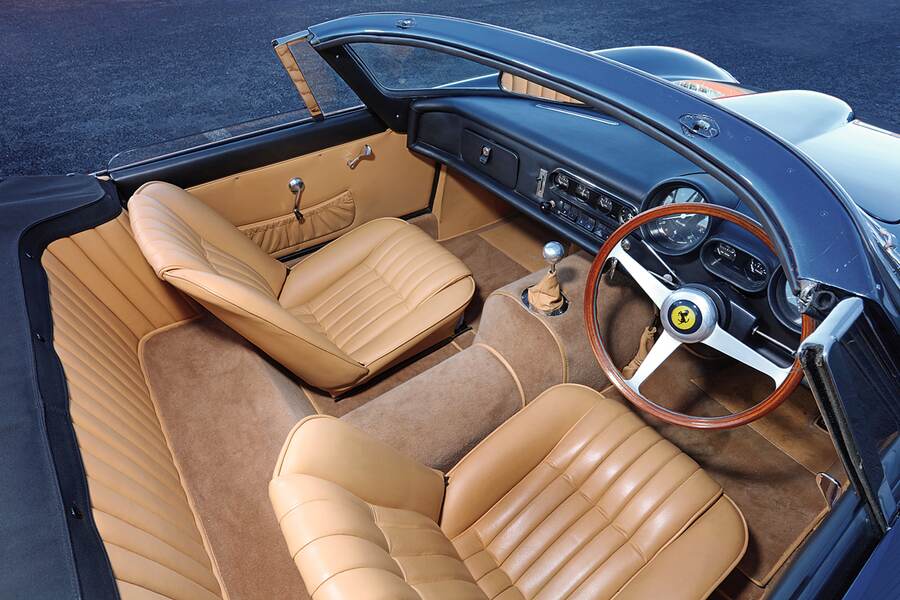 “We met Neri, and with the help of Carla, an interpreter, a deal was done and the car was brought back to the U.K.,” Blackburn recounts. “I’m pretty sure that Neri brought it over himself. He liked to dress in Harris tweed and used to go to Scotland on grouse shoots.”

Allen’s purchase included the wooden body buck, which he later sold. Does this mean someone out there is planning on building a fourth spider?

In any event, Allen then hired U.K. Ferrari specialists to complete the Nembo conversion. This included fitting inner panels, a windshield, and new upholstery, trim, and paintwork. The completed car made its debut at the Ferrari Owners’ Club Concours at Cornbury Park in 1998, where it won a couple of trophies.

“He didn’t drive the car much at all,” says Allen’s good friend, racing buddy, and current Ferrari Owners’ Club Finance Director Chris Butler. “He took it to shows every couple of years, usually on a trailer, and parked it on the lawn. He was far more of a racer than a concours person or a polisher. He had six Ferraris, all silver. He used to joke that his wife thought he only had one, because they all looked the same to her.” 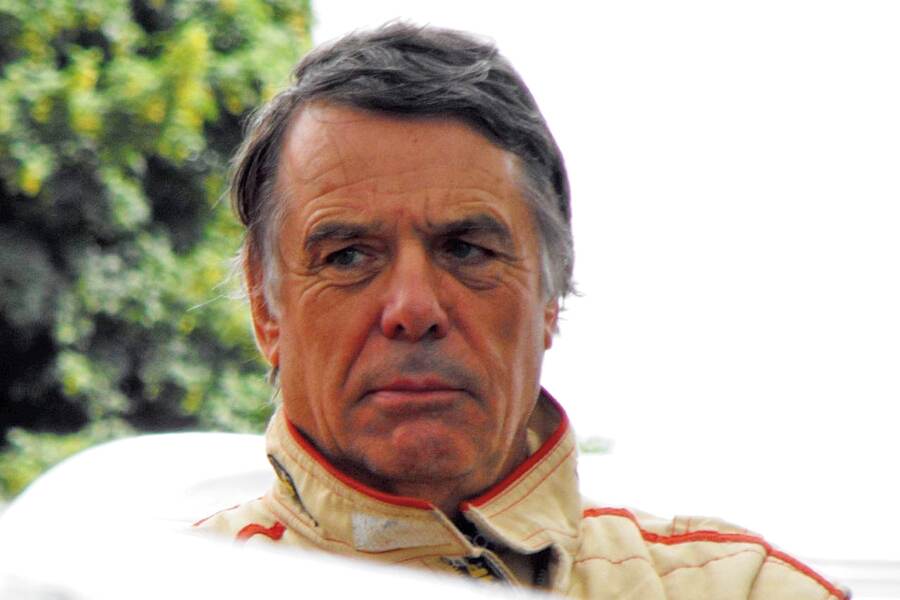 When Allen became ill, Butler helped him sell off his Ferraris, even buying his race and hillclimb 328. The Nembo was the last to go, and Allen always had a lingering issue with it.

“Richard had a fantastic relationship with Ferrari, but was disappointed that Ferrari never gave the car the thumbs-up, they didn’t consider it to be a true Ferrari because it didn’t come out of the factory like that,” recalls Butler. “He was also aware that there were some people in the Club, and some of the concours panel and judges, who said it wasn’t the real deal. That irritated him.”

THAT LACK OF FACTORY RECOGNITION posed no problems for s/n 5805’s new owner, Bill Heinecke. Born in America, Heinecke has lived in Thailand for the last 56 years, and is now a Thai citizen. He has amassed a large collection of highly desirable cars, many of which are Ferraris, which he keeps in the U.K., the United States, and The Netherlands.

“This car took my fancy because I always loved the 275 NART Spyder,” he tells me. “There’s only ten of them, but this is like having one. 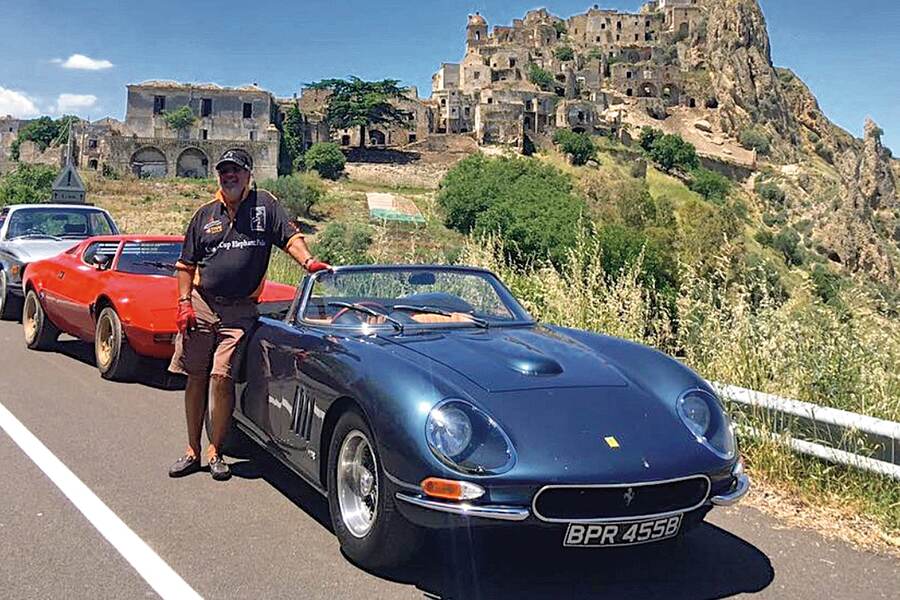 “I’ve had a number of 275 GTBs and so when it came up for auction I asked Chris Holley [who looks after his cars in the U.K.] to bid for me,” Heinecke continues. “I said I want to get it no matter what, and since the money was going to charity let’s not quibble too much. It’s a head-turner from every angle. It’s got everything you want in a good-looking car, and it’s certainly a very nice car to drive.”

Unlike Allen, Heinecke drives the Nembo regularly. “It’s my first Ferrari with overdrive and it works beautifully,” he says. “Some of my other cars are now getting so valuable, but with this I’m not afraid to take it on long trips and just enjoy it. I’ve taken it on a number of runs in Europe, mostly in Italy, and a couple of runs in the U.K. I just love the car and the history of it. It handles very nicely. Chris [Holley] is doing some work on it to improve it further, but all in all it’s a super car. It’s certainly one of my favorites.”

Chris Holley, who runs The Light Car Company Ltd. in Oxfordshire, takes up the story.

“One of the issues you have when you chop the roof off is that you lose some of the rigidity,” he explains. “Chassis wise, this is quite good. They have shored up the back end with some heavy ironwork to try and take out that torsional twist. They have beefed up the A-pillars, and the steelwork that goes across the top of the windshield is quite substantial. They have given it some thought, for sure.

“They shortened the chassis, but I don’t think that was to copy other cars,” he notes. “I think it was an arbitrary thing to get it looking right and get the right proportions. It was a design exercise as much as anything. I think it started off as a reasonable job, but the last 10 percent appears hurriedly put together.”

Holley and crew have been hard at work sorting out that last 10 percent to make s/n 5805 as close to perfect as possible. These fixes have ranged from a complete new wiring loom to sort out problems with the electrics, to reconfiguring the footwell because the pedal box was fouling things, to lowering the seat for a proper driving position.

“There was also an issue with the rear end,” says Holley. “Whenever it went over even the smallest of bumps, the wheel would rub the inner wheel arch. I think they must have bought a generic soft top for this car and, to make it fit, they beat in the inner wheel arch. This produced a bulge under the car on which the wheel rubbed. To compensate, they put really, really stiff springs on the back, so the suspension hardly moved and the wheel wouldn’t hit the bulge. It didn’t work and it made the ride impossible. We’ve completely remodeled the steel framework of the roof, beaten the wheel arches back out to how they should be, and are making another soft top for it.”

So what’s it like to drive? “It has lost some of its torsional rigidity,” Holley notes. “I have driven 250 and 365 Californias and they all suffer from some twist. This moves more than a 250. The 4-liter engine, which is bigger than in the 250s, is superb. The handling is good. It’s not tail-happy, it doesn’t dive, it doesn’t lift. It’s well-sorted in that respect, and you’ve got a bit of confidence in the car when you are going fast.

“It stops, it goes fast, and it does all the things it’s supposed to do,” he concludes. “The whole package, the shortened wheelbase, the engine, even the driving position are very nice. It’s a nicely proportioned car, a nice driving car, and I think this is why Bill likes it so much. Once we’ve got these little issues sorted out, I think it will be a superb car to drive.”

Special thanks to everyone interviewed for this story, as well as Ferrari historians Keith Bluemel and Tony Willis. 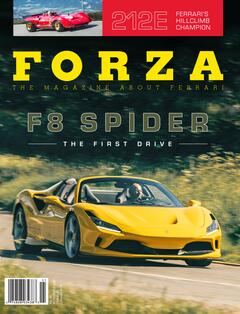