Despite his many years racing Jaguars and Aston Martins, Graham Whitehead bought this 250 GT SWB for his final run at the 24 Hours of Le Mans. 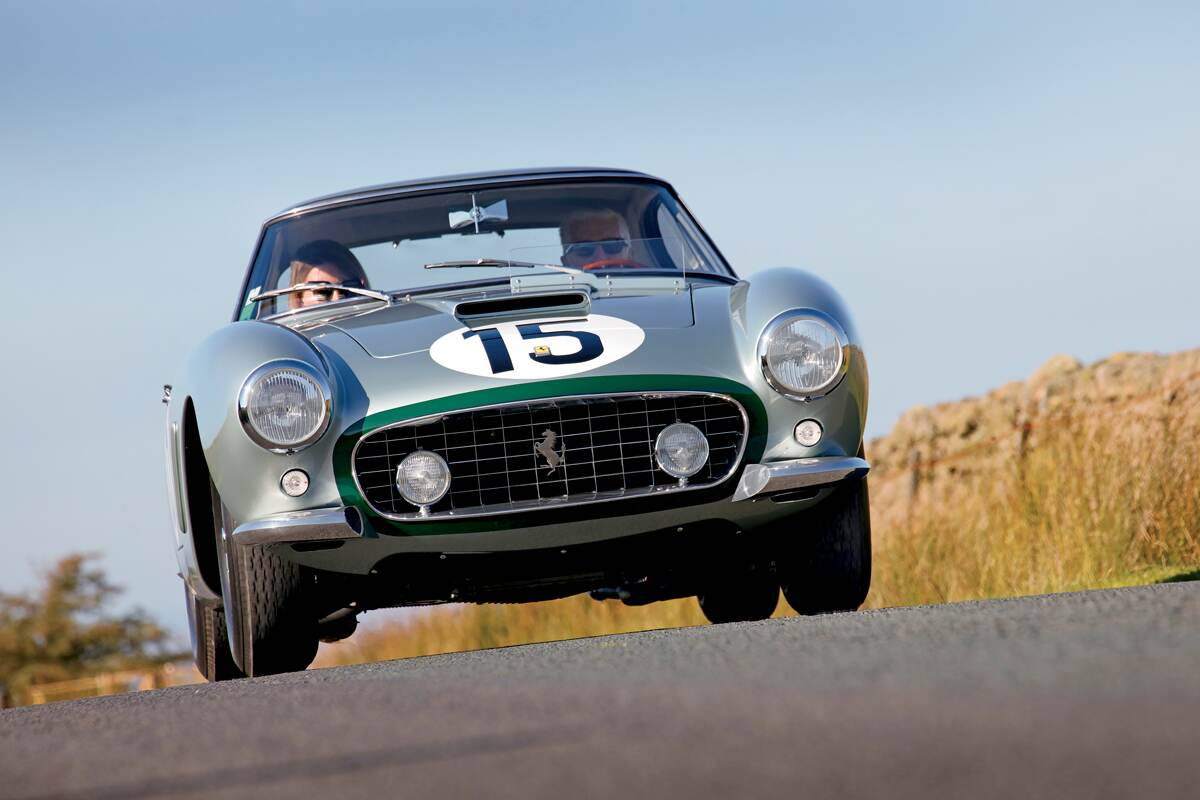 STORY AND PHOTOS BY JAMES MANN

That year’s event at the Circuit de La Sarthe in northwest France, the most famous and grueling endurance race on the calendar, took place under a shadow left by the Belgian Grand Prix the week before. Two drivers, Chris Bristow and Alan Stacey, had been killed, while two more, Mike Taylor and Stirling Moss, had been seriously injured. Despite this, Le Mans was much anticipated for the battle between Ferrari and Porsche, who were fighting for the lead of the Marque’s Championship, with previous year’s winner Aston Martin having withdrawn its works sports-car team to concentrate on Formula 1. Over 200,000 spectators came to witness the on-track confrontation.

Ferrari had successfully homologated the SWB for the FIA’s 3-liter GT class just ten days before Le Mans, yet s/n 2009 (driven by Whitehead and Henry Taylor) was one of seven privately entered examples in the race. Four factory-entered Testa Rossas and two other privateer Prancing Horses would start among a strong field that included four Corvettes (three entered by Briggs Cunningham), a pair of factory Porsche RS60s, and two Aston DBR1s. 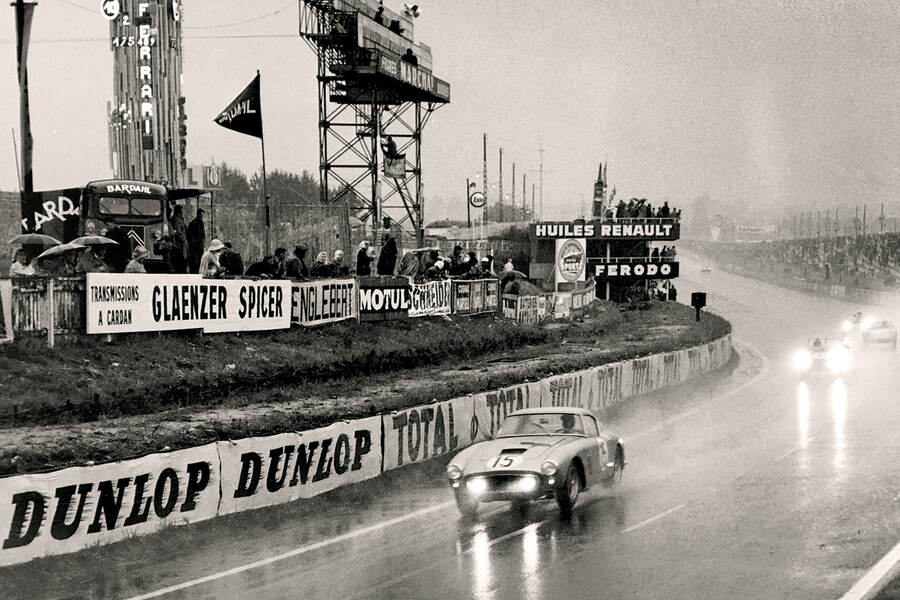 On Saturday, June 25, when the famous Rolex clock hit 4 p.m., the drivers sprinted across the track in the traditional Le Mans start. Jim Clark was first away in an Aston, followed by the Corvette of Dick Thompson and Walt Hansgen’s Jaguar, but it was the Maserati Tipo 60/61 of Masten Gregory that led after the first lap.

Heavy rain arrived three hours into the race, leading to numerous retirements caused by flooded engines, electrical failures, and accidents. By 8 p.m., Olivier Gendebien and Paul Frere in a works 250 TR59/60 were a whole lap ahead, a lead they would never lose.

Behind the front runners, the troop of Ferrari SWBs ran along strongly, with s/n 2009 leading its siblings until midnight. Then, in the 21st hour, disaster struck: While travelling at over 150 mph down the long Mulsanne straight, s/n 2009’s V12 engine backfired through the carburetors so violently that the hood was blown off. Taylor had no choice but to retire the car on Lap 258. 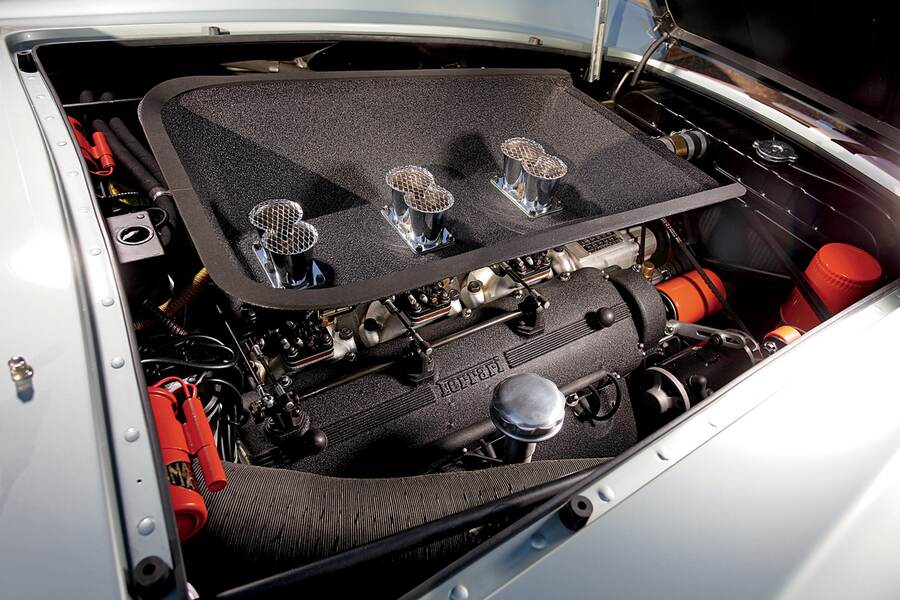 Ferraris finished first and second, Gendebien and Frere ahead of Andre Pilette and Ricardo Rodriguez in a NART-entered 250 TR59. Third place went to Clark and Roy Salvadori in their Aston, while SWBs crossed the line in fourth, fifth, sixth, and seventh.

GRAHAM WHITEHEAD was born in the town of Harrogate, Yorkshire, in 1922, into a wealthy family in the textile industry. His half-brother, Peter Whitehead, eight years older, was also a racing driver; he won the 1938 Australian GP and would go on to win Le Mans in 1951 in a Jaguar XK120C with Peter Walker. Graham got his first taste of motor racing in his brother’s ERA in 1949 at the International Trophy at Silverstone. He continued to race throughout 1950 and ’51 in national events in the same car, before entering an Alta in the 1952 British Grand Prix, where he finished a respectable 12th.

Also in 1952, the younger Whitehead enjoyed his first taste of competing in a Ferrari, when he and American Tom Cole teamed up in the latter’s 225 Sport for the first Goodwood Nine Hours. The pair finished second, and Graham discovered a taste for endurance racing. 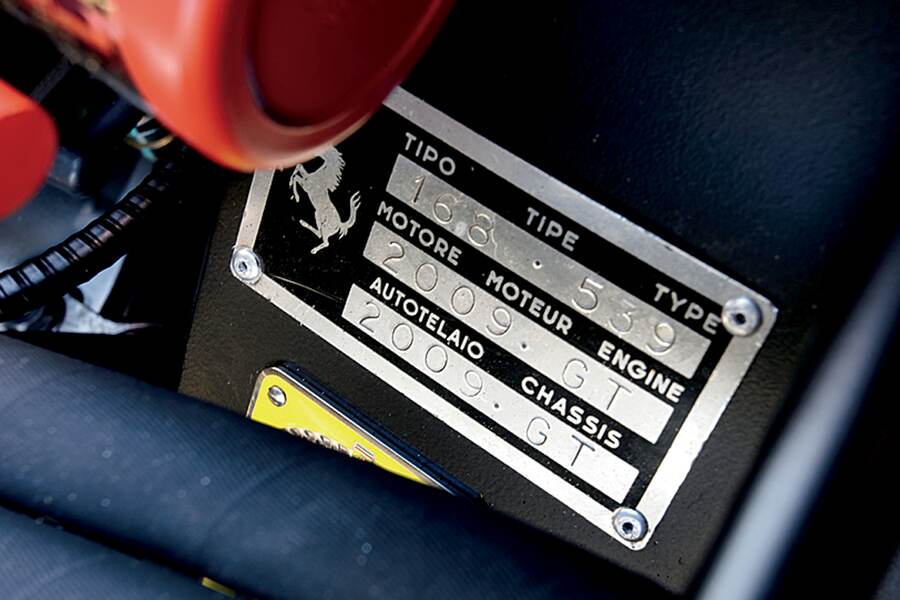 Over the next decade, Whitehead competed no fewer than seven times at Le Mans—although he was plagued with bad luck and completed the distance just once. In 1953, his Bristol 450 caught fire. In 1954, behind the wheel of a works Aston Martin DB3S, he crashed seven hours into the race. In the infamous 1955 race, he and brother Peter co-drove a factory Cooper Jaguar T38 but retired after four hours with an oil leak.

Then, in 1958, the Whitehead brothers brought their privateer DB3S home in second place, between works Ferrari and Porsche entries—no mean feat. Tragically, just a few weeks after this success, Peter was killed in an accident during the Tour de France. Graham was driving when their Jaguar left the road and tumbled into a 30-foot-deep ravine at Lasalle, near Nimes. He escaped with minor injuries and returned to racing the following year with his own Aston Martin DBR1, in which he retired at Le Mans in ’59.

Whitehead’s final entry at Les 24 Heures came in 1960, in s/n 2009. The then-new SWB was an unusual choice, as he was better known for competing in English machinery, but, clearly, a good one. 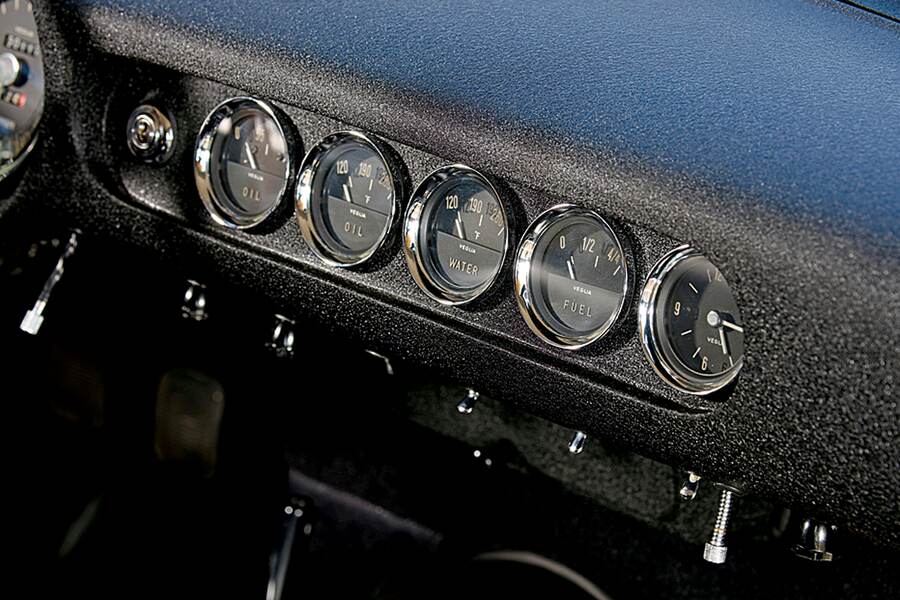 THE FIRST 250 GT SWB was displayed on French importer Charles Pozzi’s stand at the 1959 Paris Auto Show, where it was the center of attention. Pininfarina’s new body design was more refined, streamlined, and feminine than the angular GT cars of the earlier 1950s, with less overhang front and rear and a higher roofline with more glass allowing better all-round vision. Its proportions were perfectly balanced.

Later, in Geneva and Turin, Ferrari’s latest creation was displayed without its 16-inch Borrani knock-off wire wheels to show off the Dunlop disc brakes at all four corners—a big selling point in the days when most cars still ran on drum brakes. In fact, the SWB was the first GT Ferrari to be offered for sale to the public with disc brakes all round.

While the new car was an instant hit, potential buyers who managed to get their names on the waiting list were often disappointed, either with the very long wait for a car or because they were excluded because they were not serious, well-known racers. And the SWB was born to race. 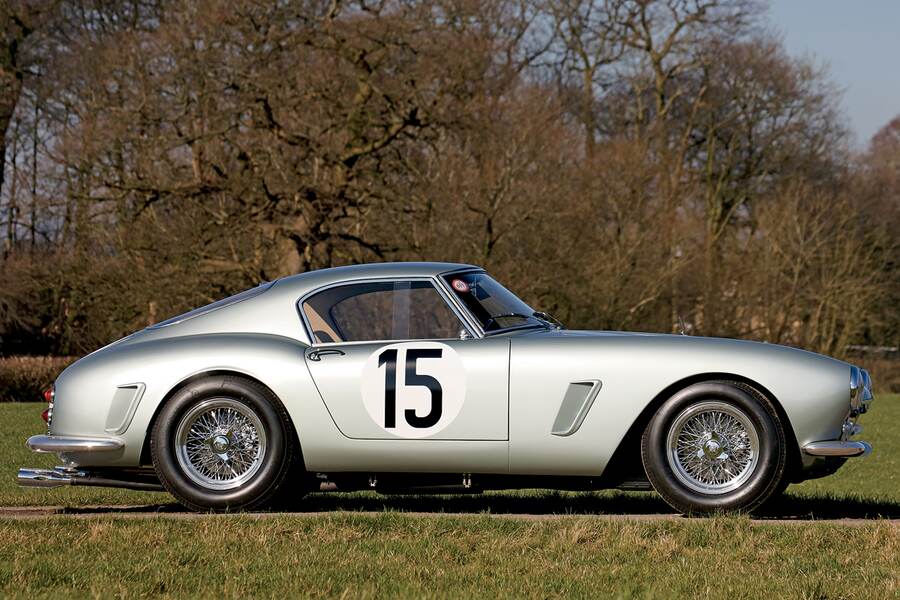 Known in Maranello as the Passo Corto, for short wheelbase, the model came about as a development of the 250 GT Berlinetta that had won the prestigious Tour de France three times in a row—in 1956, ’57, and ’58—and later bore the name of that famous French race. The team behind its creation included engineers Giotto Bizzarrini, Carlo Chiti, and Mauro Forghieri, who decided to shorten the chassis’ wheelbase from 2,600 mm to 2,400 mm in order to improve handling and save weight. The resulting frame was manufactured of light tubular steel by Vaccari of Modena.

Two versions of the SWB were offered: a steel-bodied Lusso with luxurious interior trim, designed for open-road driving, and a lightweight, aluminum-paneled Competizione. The differences between the two versions were significant, starting with Gioacchino Colombo’s well-proven 2,953-cc V12 engine, which was already nicely sized for the FIA’s new-for-1960 3-liter GT class.

Cast at Ferrari’s in-house foundry from Silumin, an alloy of silicon and aluminum, the Tipo 168 featured pressed-in steel wet cylinder liners. Its crankshaft was machined from a solid billet of steel, making it very strong, and it was supported by seven main bearings, increasing its reliability. With triple Weber 36 DCZ twin-choke carburetors, the 3-liter V12 delivered 240 bhp at 7,000 rpm in Lusso specification. In more highly strung Competizione guise, the Tipo 168B pumped out 275 to 280 hp. 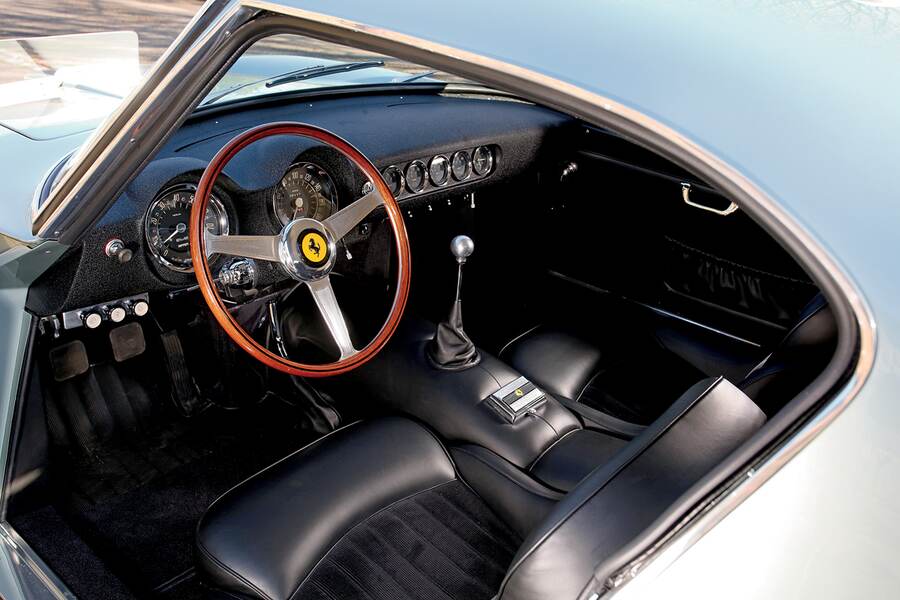 The Competizione also received a quicker steering rack and improved suspension, with stiffer front springs, Koni or Miletto shock absorbers at both ends that allowed for ride-height adjustment, and a front anti-roll bar. The rear suspension was based around a live axle with semi-elliptic leaf springs. A larger 31.7-gallon fuel tank and a quick-fill, spring-latched, aluminum fuel cap were standard, as was a limited-slip differential. There were seven final-drive ratios to choose from, which offered a top speed of just 125 mph for the lowest up to a claimed 166 mph for the highest—although it was considered unlikely the SWB would top 155 mph due to its rather high aerodynamic drag.

Another weight-saving difference was that, where the Lusso received regular window glass, the Competizione utilized Perspex on the sides and rear. Inside the cockpit, the race cars bore a crackle-painted dashboard. Both versions featured the same large twin instruments facing the driver—a 300-kph speedometer and a 8,000-rpm rev counter—with smaller gauges for oil pressure and temperature, fuel level, and water temperature, as well as a clock, lined up in the center.

All of these differences, combined with high demand, Ferrari’s old style of manufacturing, and bespoke detailing to customer specification, meant there were often subtle differences between cars. Whitehead, with his many years of racing experience, ordered s/n 2009 with an extra Perspex screen partway up the hood, just behind the air intake. It was there to deflect insects and rain, and no doubt proved beneficial in the atrocious conditions he faced during his final Le Mans. 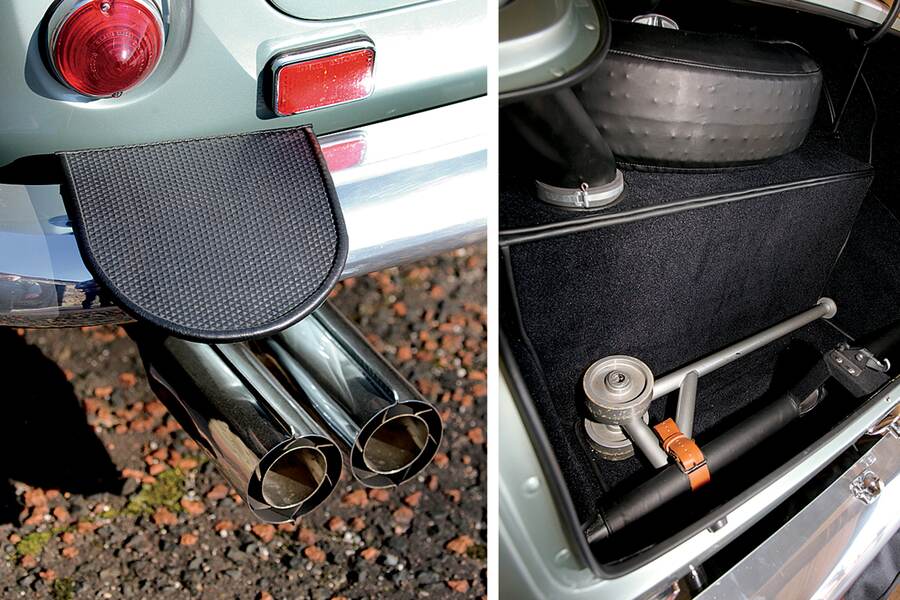 OTHER DRIVERS enjoyed more success in SWBs than did Whitehead. Sir Stirling Moss, for example, drove Rob Walker’s famous blue-and-white example to victory in the RAC Tourist Trophy at Goodwood two years on the trot, in 1960 and ’61. About the car, Moss said, “It was surprising how good it was all round, with good brakes, a super engine, and a crisp gearbox. As a grand touring car for really serious road racing, it was difficult to fault.”

Legendary racer Derek Bell, who turned to vintage racing after retiring from the professional ranks, agrees with Moss. “The 250 GT SWB is one of the sweetest cars one can drive,” he says. That magnificent V12, the gearbox, and the very forgiving suspension—plus that sound—make it the best car you could drive in Endurance races. Any chance I get to drive either a GTO or an SWB, I jump at it.”

In period, the SWB proved impressively successful in the challenging conditions of the week-long Tour de France, winning the event in 1960, ’61, and ’62. (The model also won the over-2-liter GT-class title for Ferrari in 1961, and contributed heavily toward the company winning the Marques’ Championship in both 1960 and ’61.) 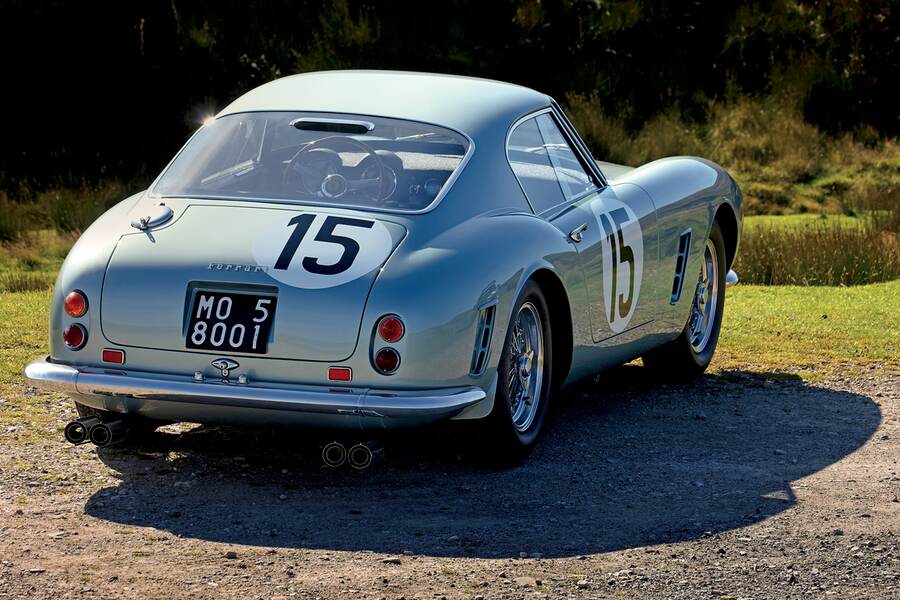 While Whitehead never entered the Tour de France, he did continue to race s/n 2009 throughout the rest of 1960. He co-drove with Jack Fairman in the Tourist Trophy, finishing fifth overall; won at the Taca Cidale in Luanda, Angola; and finished fifth in the 1,000-kms of Paris that October. In 1961, he entered the Ferrari in nine non-championship races. His best result was a second place at Snetterton, although he also finished third in London, on the suburban, twisty Crystal Palace circuit, and at the IXth Grand Prix de Rouen.

In June 1962, Whitehead sold the car to Worcestershire resident Geoff Richardson, who kept it for 11 years, racing it occasionally in national events. In 1986, new owner Paolo Basiolo bought the Ferrari home to Italy.

Then, in 1995, s/n 2009 started a period of vintage racing under the ownership of Giuseppe Calgaro. With Franco Meiners behind the wheel, the SWB competed in the Tour de France Auto, Oldtimer Grand Prix at the Nürburgring, and the Racing Ferrari Festival at Mugello. It also competed at the Coys International Historic Festival at Silverstone in 2001, and has remained in the UK ever since. 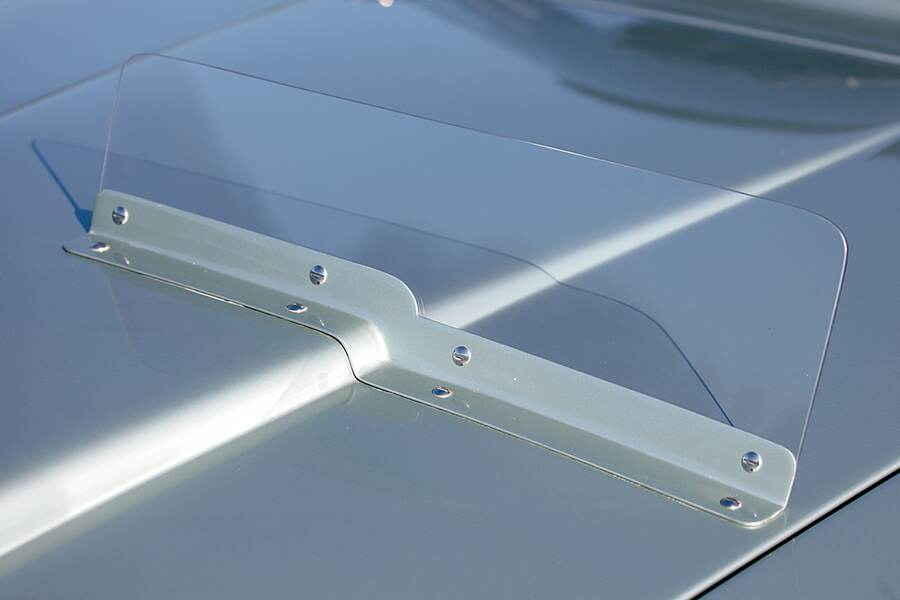 In March 2010, current owner William Loughran purchased the Ferrari from well-known collector Bill Ainscough. Five years later, Loughran sent s/n 2009 back to the factory for a comprehensive Ferrari Classiche restoration, and since has shown the car at major concours.

“When the opportunity arose to buy s/n 2009, I didn’t hesitate,” says Loughran. “I knew of the car and what a great example it was; in particular, I loved the history with the Whitehead brothers. My opinion on the car proved to be correct when it won the Honorary Jury Special Award at Ferrari’s 70th Anniversary Concorso d’Eleganza at Fiorano.” 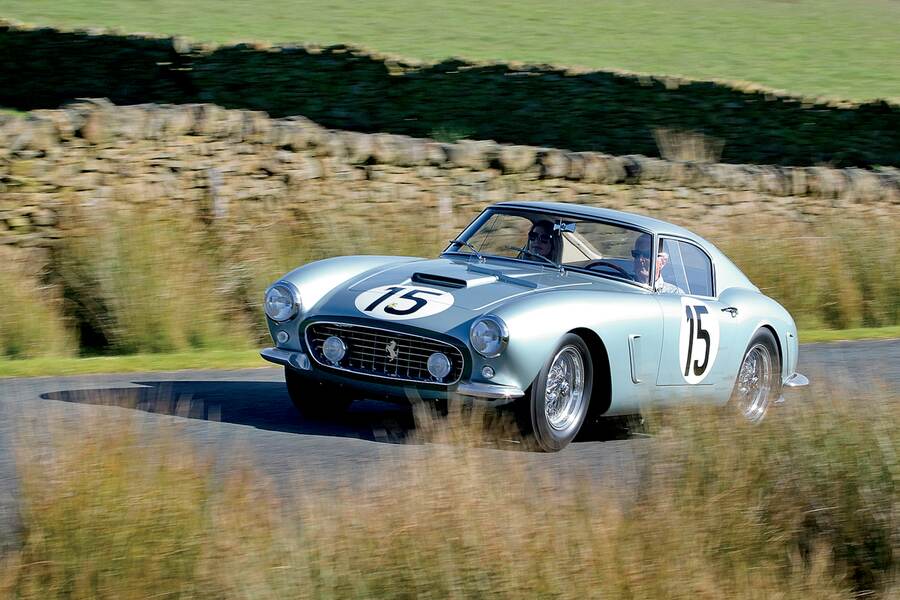 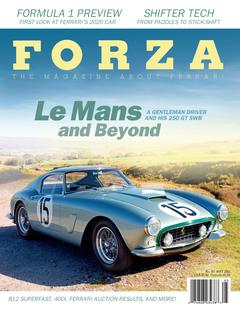