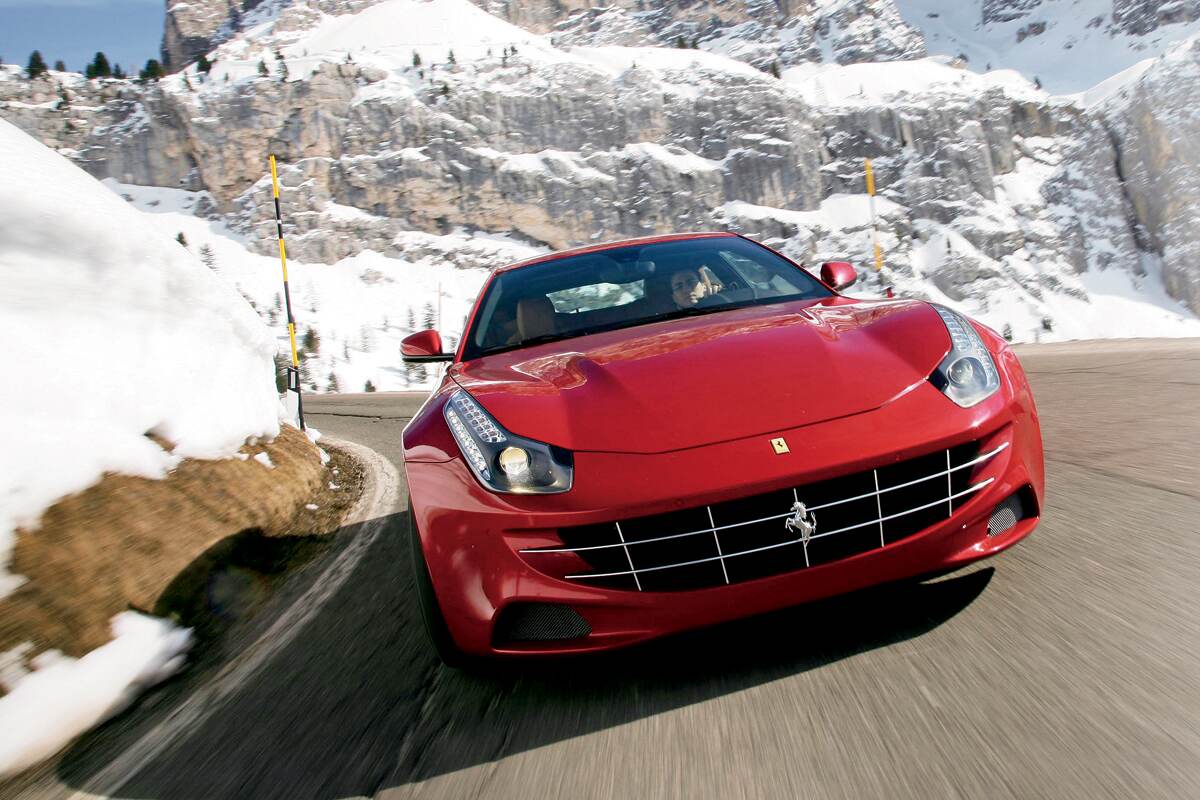 At the 2011 Geneva Auto Show, Maranello unveiled an innovative new V12-powered model: the Ferrari Four, officially known as the FF. Like the 612 Scaglietti it replaced, the FF featured four seats. Unlike the 612, or any other Prancing Horse, it also boasted four-wheel drive.

Created completely in-house, and developed with the help of former World Rally Champion Markku Alén, Ferrari’s 4RM (Ruote Motrici, a.k.a. Wheel Drive in English) system consisted of a two-speed gearbox mounted to the front of the engine and driven by the crankshaft. Using a series of wet carbon-fiber clutches and some intensive computing power, the gearbox directed torque to the front wheels as needed when the rear wheels (themselves driven by the car’s seven-speed dual-clutch F1 transaxle) lost grip.

Ferrari released a number of videos showing the FF sailing serenely through the snow, but most owners were more interested in what resided under the hood: a 6.3-liter V12. Producing 660 horsepower (a full 120 ponies more than the 612) and 504 lb-ft of torque, those 12 cylinders could launch the two-ton-plus FF from rest to 62 mph in just 3.7 seconds. The Ferrari’s top speed was 208 mph.

Aiding that impressive terminal velocity was the FF’s smooth and striking silhouette. While a few companies had converted Ferrari coupes and berlinettas into station wagons before, the FF was the factory’s first, which it called a shooting brake. Whatever the name, the FF combined a recognizably Ferrari front end and numerous traditional design cues with an extra-long roof that provided enough headroom for full-size adults to fit comfortably in back (along with a trunk space twice as big as that of the 612, to boot). 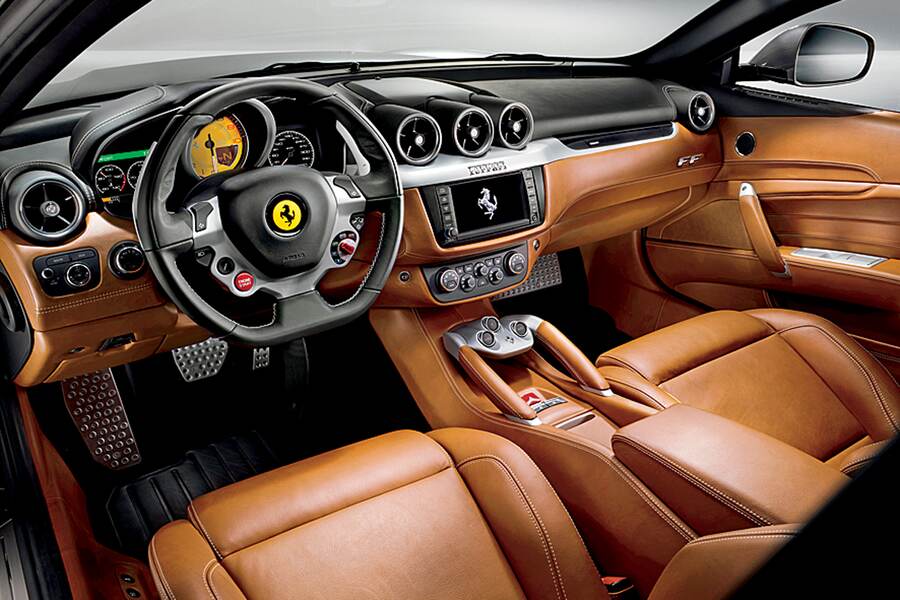 While the FF’s exterior was styled by Pininfarina, as had been the tradition for more than five decades, its interior, like the 4RM, was an in-house effort. Ferrari Centro Stile, under the watchful eye of design director Flavio Manzoni, reworked, modernized, and harmonized the luxurious, leather-lined cockpit. Comfort was important for the car’s Gran Turismo mission, and the big Ferrari delivered with a smooth (if not exactly plush) ride and an extremely quiet cockpit (at least until the V12 spun up in anger). In 2014, the FF even became the first car in the world to feature Apple CarPlay.

In the time since its debut, the FF has proven to be everything Ferrari intended: a fast, comfortable, reliable, spacious, all-weather touring machine. Better still, in some cases these machines are now available at less than half their original price. If an FF sounds appealing, there’s never been a better time to check one out.

WHILE THE FF never commanded a six-figure, over-sticker premium like Ferrari’s newest sports cars often do, it was still an expensive proposition when new. The four-seater’s base price started at $295,000, and Maranello’s profitable habit of piling on the options instantly took out-the-door prices into the $375,000-400,000 range—or more—thanks to a two-page options list. While carbon-ceramic brakes and 20-inch wheels were standard, most buyers were tempted by treats like the carbon-fiber steering wheel ($5,000), dash inserts ($7,500), and driver’s zone (also $7,500), a backup camera ($3,600), suspension-lifter system ($5,800), and AFS headlights ($2,000), along with the practically obligatory Scuderia fender shields ($1,600) and colored brake calipers ($1,400). Furthermore, many window stickers included a substantial four-figure sum for unspecified “Other Options.”

No factory production figures are yet available for the FF (or any other regular-production model of recent years). Our research suggests roughly 3,000 FFs were built in total between 2011 and 2016, and just over 750 of those came to the U.S. 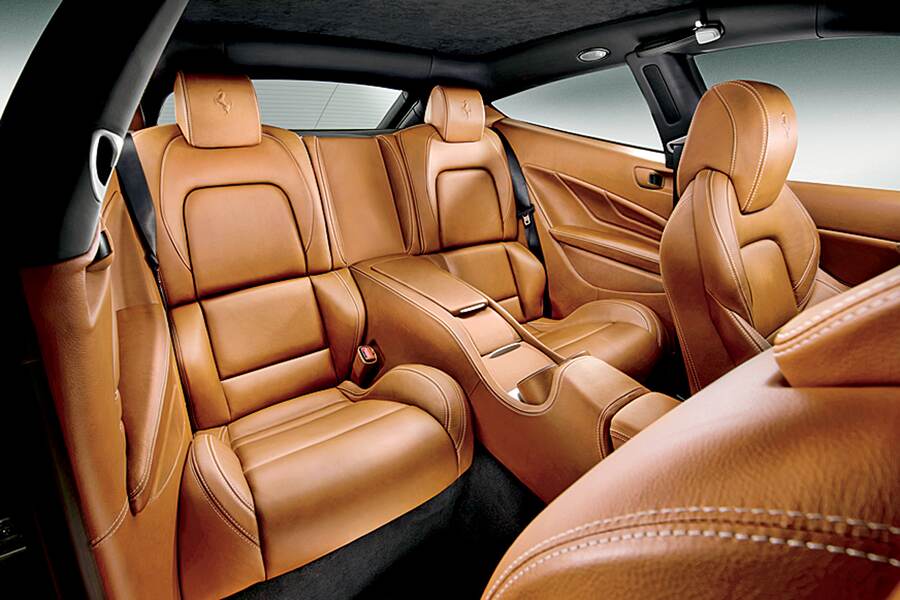 That generous supply (there are usually 100 or more available for sale worldwide at any given time), the power of depreciation, and the arrival of its latest-and-greatest successor, the GTC4Lusso, have conspired to push FF prices down. You’ll see asking prices for early examples in the $130,000 range, with late, low-mileage, heavily optioned cars still coming in under $200,000.

It’s difficult to describe a six-figure price tag as inexpensive, but we definitely view the FF as a seriously good buy. There’s a reason these machines accumulate more miles than Ferrari’s sports cars: They are comfortable, reliable, versatile, spacious, and all-season friendly. At the same time, they offer more performance than most drivers can ever use. The most consistent knock against the FF is its once-controversial styling, but you’ll forget all about the exterior once you’re behind the wheel. — Michael Sheehan

These prices are for fully serviced cars in good-to-great condition.

The FF brought more power and more technology than ever before to Ferrari’s 2+2 lineup. Here’s some of what we’ve said about the model since its introduction.

THIS FERRARI has an amazing ability to fly down rough roads. When the going gets bad, the FF seems to elevate above it all, distancing the driver from the clutter below while still maintaining an iron grip on the proceedings. While the road pitches and heaves its way downhill through a mid-forest meadow, my right foot stays flat on the floor. 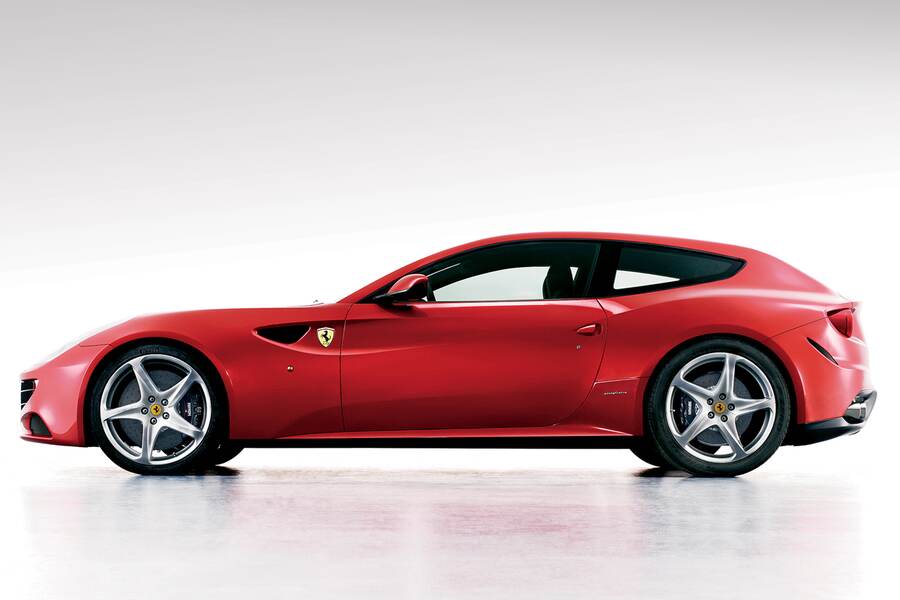 From the driver’s seat, the experience is a mix of astonishment and adrenaline. The only other cars I’ve driven that offer this kind of serious, effortless speed over battered tarmac are the Audi R8 and the 458, and I’m not sure either of those low-slung machines could handle some of these craters as well as the FF. Big bumps seem to disappear under its wheels.

The car turns in sharply—far more quickly than its size would suggest—and tracks true. The FF can’t dance on a dime like the slalom-conquering Porsche Panamera Turbo, let alone an extreme sports car like the 458, but it feels very athletic and extremely amenable to hard driving.

When I get back on the power, the FF rockets out of the turn with the urgency of a 458. It might be even quicker, given the V12’s horsepower and torque advantage, the FF’s four-wheel-drive system, which is designed to kick in when the rear tires lose traction, and a traction-control system that won’t let the rear wheels spin unless all the electronic driver’s aids are turned off.— Aaron Jenkins [“Fantastic Four,” FORZA #113]

I’D SPENT MY FIRST DAY in the FF tearing around Los Angeles, mostly on a mix of poorly paved, traffic-clogged surface streets and freeways. If this sounds like a miserable place to drive a Ferrari, it is—but only in the sense that speeds are low. The FF handled this challenging environment with real nonchalance. 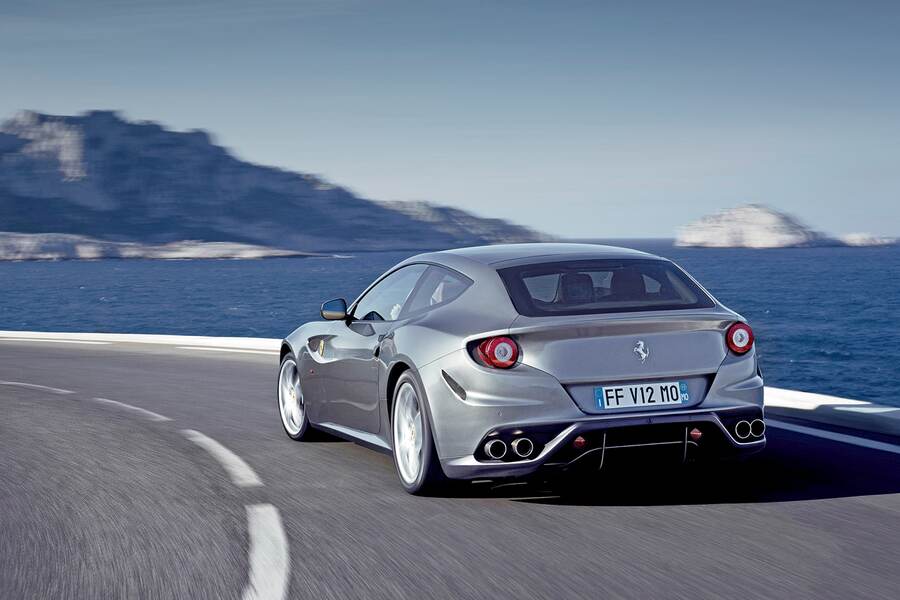 The dual-clutch transmission is one reason the FF makes a sublime city dweller. The automated clutch take-up is smooth, allowing the car to move off the line seamlessly. Throttle response is equally seamless, allowing me to drive around smoothly at part throttle without the lurchiness caused by the 458 Italia’s hyper-sensitive right pedal.

The second reason for the FF’s city friendliness is its light and fast steering, which is paired with a very tight turning radius. The practical effect of these attributes, when combined with the FF’s instant response to inputs, is that it doesn’t take long to get comfortable with the close-quarters cut and thrust of urban driving.

There is one minor shortcoming in the FF’s accommodating nature, however: ride quality. Those expecting the plush ride of a big Lexus, Mercedes, or Bentley will be disappointed by the FF’s relative tautness, as well as the way road imperfections are transmitted through its steering wheel and seat. — Aaron Jenkins [“The Long Game,” FORZA #125]

THE FF IS AS RUGGED AND RELIABLE as any low-production supercar can hope to be. There are no consistent problems with the model, the usual wear-and-tear items have proven to be impressively robust, and maintenance costs are minimal by exotic-car standards. Expect to pay $2,500 for an annual service (much of that cost going toward ultra-modern lubricants), with the once-dreaded, twice-a-decade cam-belt service a thing of the past. 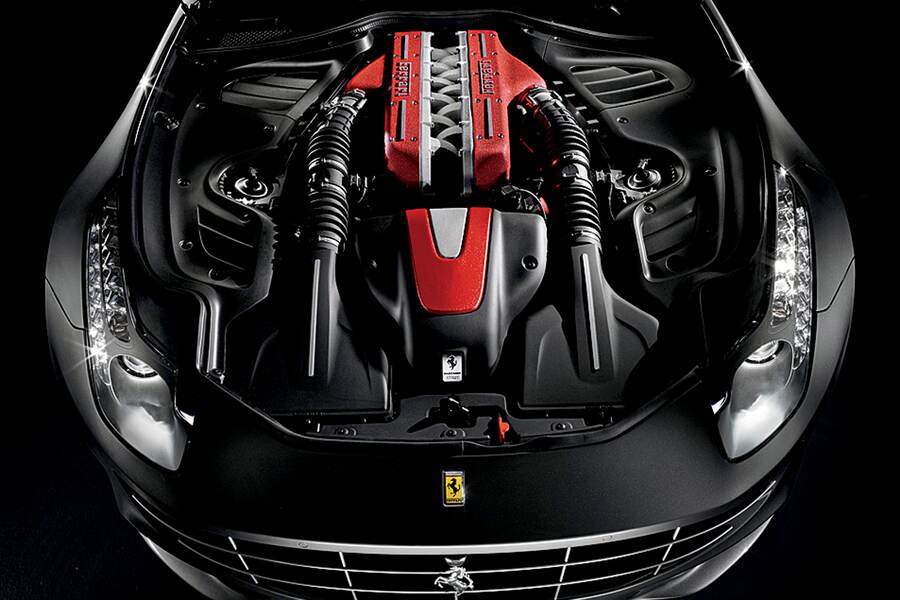 I spoke with dealers on three continents about the FF, and learned of only a few potential ailments. Several dealers had to replace secondary wiring harnesses, while one dealer in a very congested, even-more-hilly city has encountered a handful of clutch issues. A few European dealers discovered problems with crankshafts, and one dealer saw an unlucky client’s car burn to the ground. However, the only issue most owners are at all likely to encounter are software updates, which are relatively frequent and require a trip to an official dealer.

At the moment, the Ferrari dealer network holds a virtual lock on servicing and repairing these cars. That’s due in part to the popularity of the company’s extra-cost, long-term warranties, but it’s also a function of the car’s astonishing electronic complexity. Like all modern exotics, the FF utilizes a Controller Area Network (CAN) that links all its computers together: from powertrain and anti-lock brakes to stability control and keyless entry to dozens of others. If something goes wrong, these systems can cross-talk, throwing off difficult-to-track-down warning codes that can only be interpreted by a dealer or a private shop with the latest $25,000 Leonardo computer (the older SD2 and SD3 models are now outdated).

Time will tell if independent servicing becomes a viable option on these and other newer Ferraris, and how all those interconnected computers get along over the long term, but at the moment there’s nothing to recommend against buying an FF. As always, do your research, buy the best car you can afford, and have any potential purchase inspected by a shop that knows the model inside and out. —
Michael Sheehan 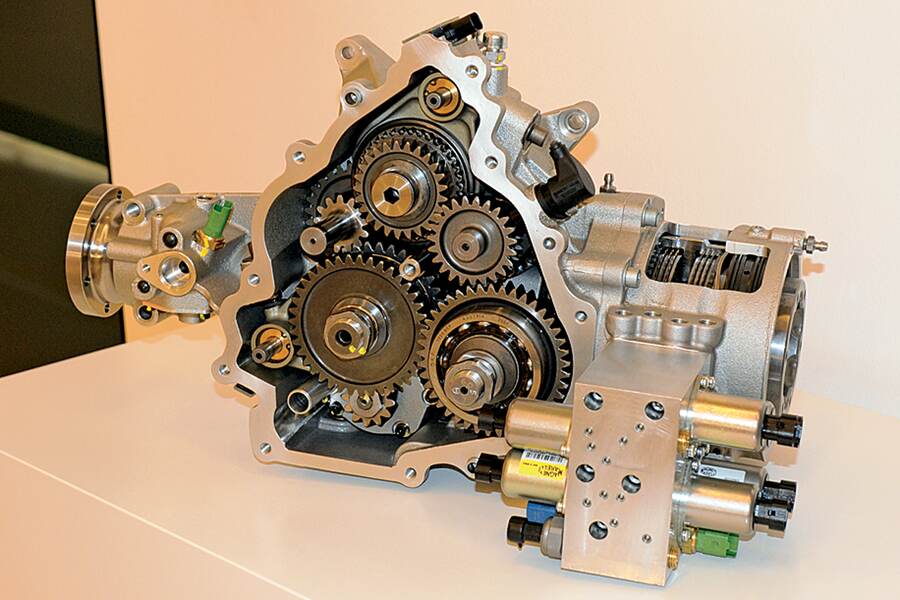 Why did you want an FF?
There were several reasons why we were interested in an FF. We have a 360 which we love to track and take long road trips in. The 360 is a little tight on luggage space, and after a long day riding in it you can be a little stiff.

I had been interested in a 612, but when the FF came out, it seemed to me that it would be the perfect touring car while allowing us to retain the sportiness of owning a Ferrari. Our original intent was to wait several years; however, when this one became available, it was too good to pass up—it was the lowest-priced FF in the country at that time given its high mileage. We are friends with the original owners and were aware that they had created the car through the Tailor Made program. The car has everything imaginable in it, as well as a specialty color and a colored carbon-fiber dash. From the first day we saw it, we thought it was amazing.

What do you use your Ferrari for?
We primarily use it for touring. We love to take it on long road trips.

What do you like most about the FF?
The V12. This is our first V12 car and there’s a tremendous difference between it and our V8. Both cars are amazing, but they each have their own distinct personality. The way it accelerates and handles anything you ask of it is breathtaking. 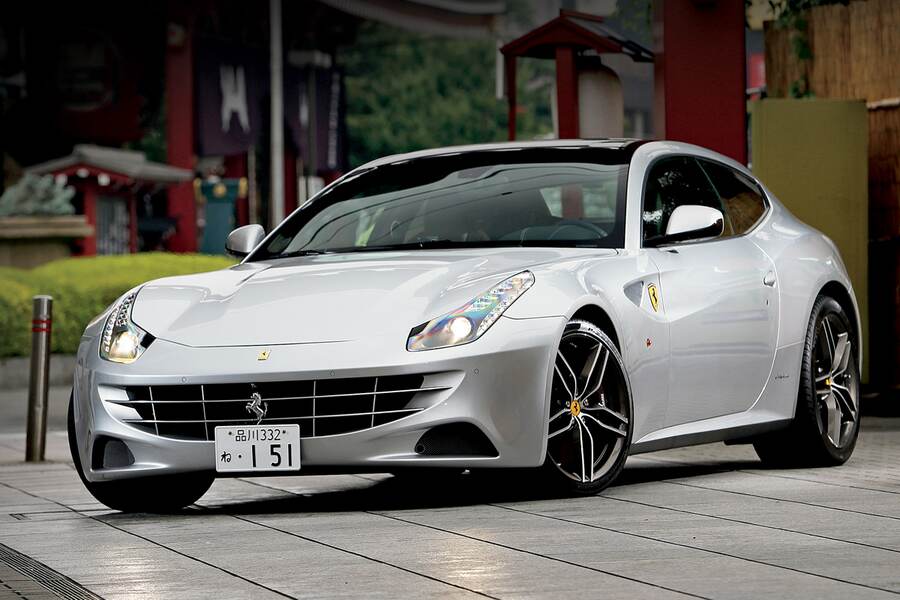 A close second would be the luggage space. My father and I took a 4,000-mile road trip this spring in it, and it held our luggage and his walker with plenty of room.

How reliable has your FF been?
We tend to do long trips in it. It has run flawlessly for us. It has only been in the shop once, and that was to do the annual service and replace the airbag [under warranty].

Would you recommend this car to a friend?
Absolutely. 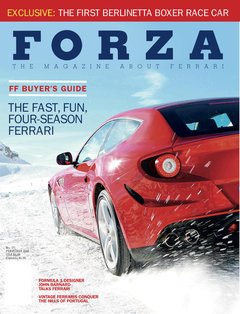