There’s far more to the 812 Superfast than simply being the most powerful front-engine Ferrari ever. 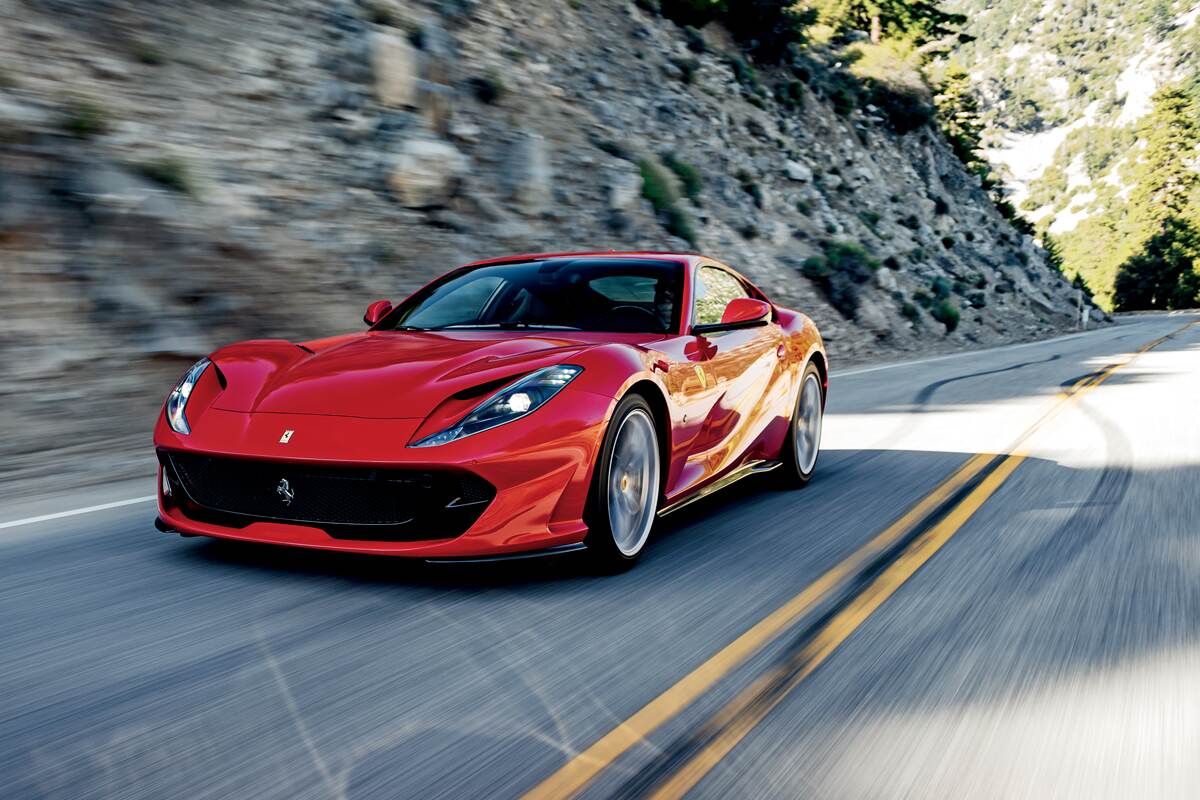 800 horsepower. At 8,500 rpm. With an 8,900-rpm redline. Sounds tasty, right? We told you about most of the nuts and guts of the 812 Superfast and its stellar performance in issue #161. Now it’s time to get Ferrari’s flagship out on American roads and see how it feels.

Although brand-new, the aptly named Superfast is just the latest chapter in a decades-old story, the most up-to-date take on that classic Maranello formula: two seats located behind a V12 engine, all tightly wrapped in sensuous bodywork. And while the 812 is, in some invisible and undetectable ways, an evolution of the F12 it replaces, the step forward is so vast it’s ostensibly a new car.

That’s even more impressive considering that the F12 represented a major advance in both design and technology over its own predecessor, the 599 GTB Fiorano. As great as the F12 was and is, though, not everyone loved it. While the exterior styling is unquestionably aggressive, it’s perhaps not as pretty or as elegant as it could have been. Inside, the mostly handsome design was maybe hampered by a slightly hodgy-podgy layout. 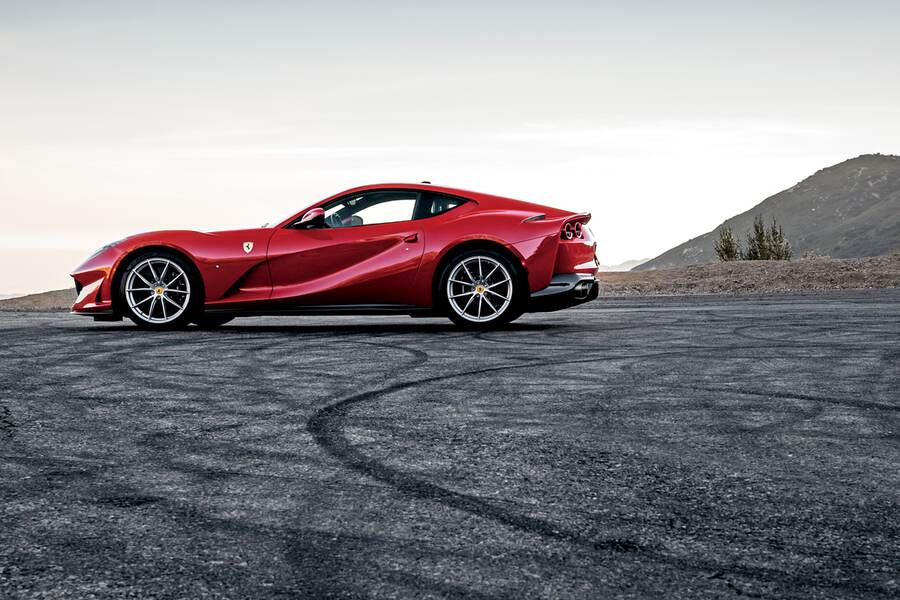 To my eye, there are no such concerns with the newer model. The Superfast offers a modern, high-tech interpretation of classic Ferrari design language, combining the aerodynamic wizardry needed to accomplish its performance goals with great proportions, bustling musculature, serious curves, and some fascinating surface details. This runner is a stunner from every angle, and it looks just right in the traditional Rosso Corsa red.

When cruising over the 812’s bodywork with eyes and hands—as one should!—it quickly becomes apparent just how much air management is going on. Despite the lack of a prominent rear wing, Ferrari’s designers invested considerable effort to manage every bit of air moving over, under, and through the car. Many of the Superfast’s gills and grilles ingest air, while an equal roster exhausts it. The result is around 40 percent more effective downforce than the F12 with substantially less drag, which helps the car handle better, go faster, and use less fuel.

The Ferrari’s rakish profile makes no attempt to look like anything other than a fastback, similar to the classic 365 GTB/4. There’s no rear deck or trunk, just a hatchback with a large window covering the storage area and part of the package shelf. Some of the aerodynamic shapes also serve as styling features, giving the sides of the car a nicely purposeful look. 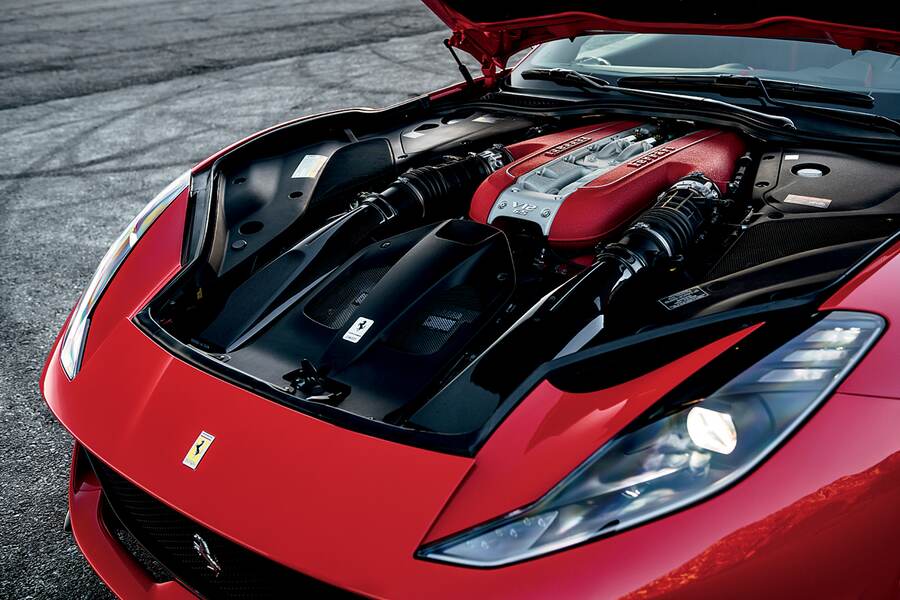 One onlooker at a gas station asked, “Is that the new ZR1 Corvette?” It’s not as silly a question as you might think, because, at first glance, the two cars’ profiles are not entirely dissimilar. Furthermore, the top-rung Vette also has a lot of aero management pressed into its skin and both machines cover about the same footprint.

The rear visage very much recalls a new, high-tech vamp on the Daytona, with an inset angled upper fascia panel, big quad exhaust pipes, and those dual rounded taillight clusters sitting up high on the fenderline. There’s no vintage parallel to the Superfast’s diffuser, but then such technology didn’t exist when the Daytona was designed. 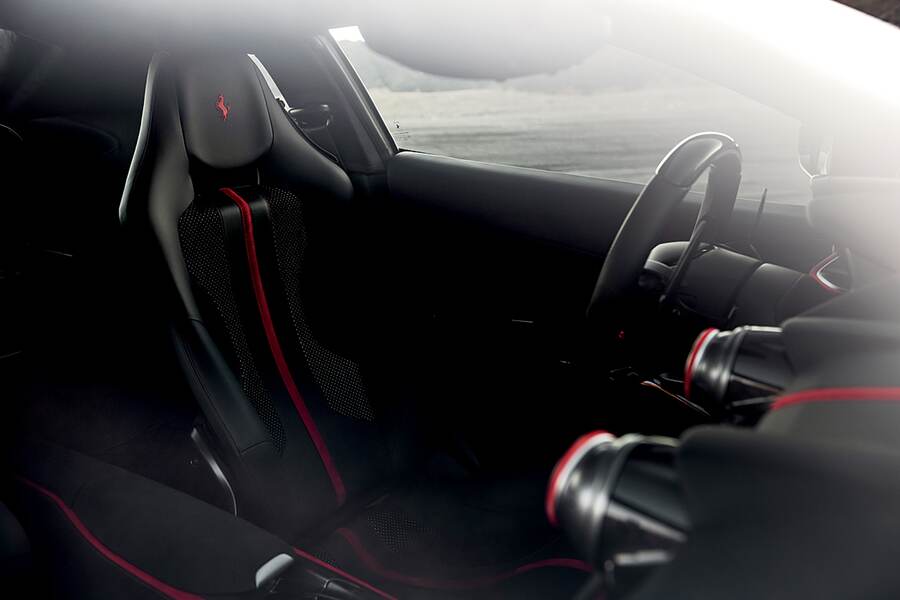 Neither did dual-clutch paddle-shifted gearboxes, which is the only kind the 812 (or any other current Ferrari) comes with. There’s no doubt someone out there will find a reason to grumble about the lack of a traditional stick-shift, but, like it or not, losing the clutch pedal makes sense. The Superfast was designed as a modern technological tour de force, even if some of its foundational aspects, such as that naturally aspirated 6.5-liter V12 engine mounted up front, could be considered old school—although, since Ferrari continues to move the game relentlessly forward, far from old-fashioned.

Before pressing the big red Start/Stop button on the steering wheel, it’s worth touring the Superfast’s fabulously realized cabin. Our test car contained nearly every option to be found on the 812 order form (to the tune of nearly $130,000 on top of the $337,000 base price) including a number of tasty interior tidbits, such as the racing-style bucket seats, special stitching, loads of Alcantara, and fabulously firm yet supple Italian leather covering nearly everything else. The dashboard, instrument panel, and control panels alluringly add their own mix of aluminum, “piano black” composites, and carbon fiber. A large round aluminum-faced tachometer sits front and center, with two driver-programmable displays located to each side; the latter serve up all sorts of information, ranging from navigation and sound system readouts to the gas gauge and digital speedometer. Overall, the cabin feels racy yet luxurious.

It’s also smartly designed, as Ferrari has taken this opportunity to update the ergonomics. One example: On many recent models the horn buttons were recessed into the upper half of the steering wheel, about where most drivers put their thumbs. The horn is now actuated by the large yellow Prancing Horse button directly in the middle of the steering wheel, where virtually every other car on the planet puts it. Another example: There’s now a second headlight button on the wheel that is used only for flash-to-pass, which previously was harder to trigger. 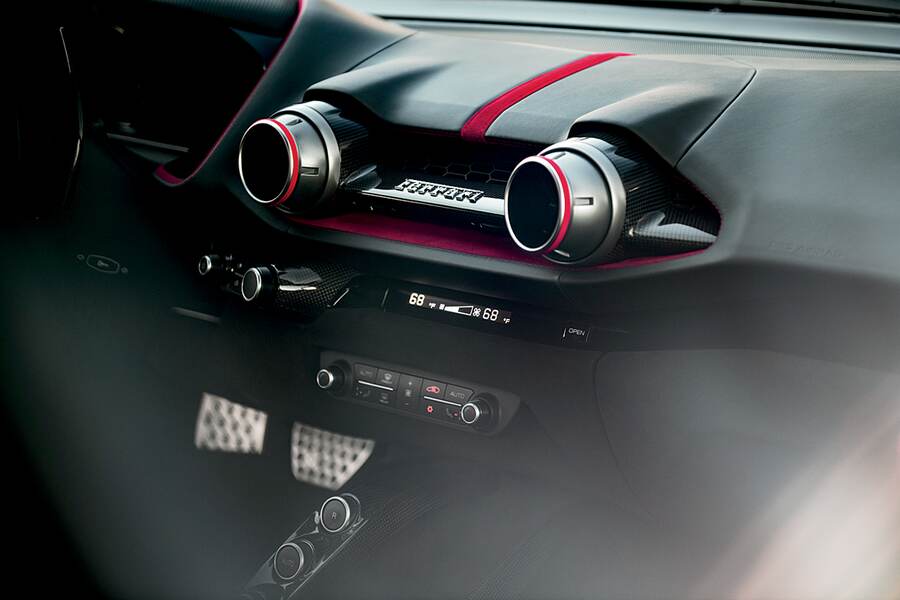 As has been Ferrari’s standard for years, the 812’s steering wheel contains numerous controls normally found on stalks, which can interfere with shift paddles (anyone who’s driven a recent PDK-equipped Porsche will likely have had that experience). Ferrari prioritized shifting over, say, the turn signals, which are activated by large buttons on the steering wheel. It sounds odd and takes a little getting used to, but it works well and ultimately makes perfect sense.

YOU DON’T START the Superfast’s magnificent V12 as much as you ignite it. Thumb that Start button and, after just a crank or two, the engine lights with a chesty bark. At idle there’s the very slightest cammy edge to it, but it’s otherwise velvet smooth.

The first thing you’ll want to sample is that lofty 8,900-rpm redline. This is best done in second or third gear, and I didn’t wait long to do it, either. Point the car straight, ease into the lower gears, then smoothly mat the throttle and hang on. Ferrari quotes a 0-60 time of 2.9 seconds, which has been equaled with instrumented testing by Road & Track, and I have no reason to question this number. The Superfast isn’t really fast—it’s crazy-stupid-fabulous fast. 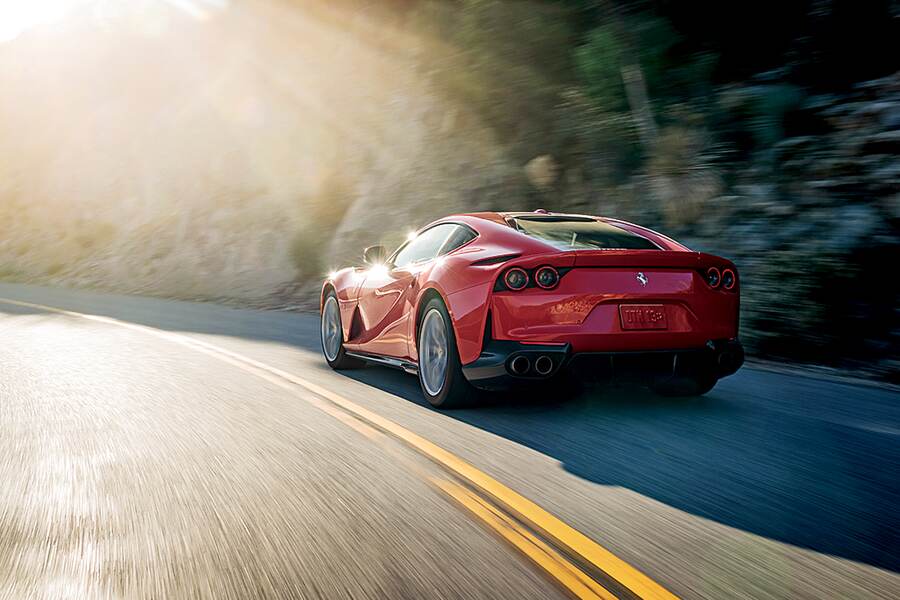 You’d expect that with a full 800 hp on tap, and having 530 lb-ft of torque certainly doesn’t slow things down. A whopping 80 percent of that torque hits at 3,500 rpm, and from there the revs shoot skyward. Be prepared to fan the upshift paddle quickly, because within a couple of seconds the (optional) shift lights at the top of the steering wheel rim will light up in sequence to alert you to the imminent arrival of the redline. Just before you get there, though, you’ll have a chance to revel in a last furious kick of enraged, stampeding cavalli. Yeow! Keep the pedal floored and in seventh gear you’ll eventually hit 211 mph, the fastest a front-engine Ferrari has ever gone.

The big engine’s song boils the blood and fires the adrenals; this is pure classic Ferrari V12, with no turbos to whistle or subdue the sound. From the outside, the Superfast shrieks like a superbike running through the gears, albeit one with the bass turned way up. The sound inside is also big and bassy, but in this case it’s blended from the mechanically whirring engine, the sonorous intake system, and those bellowing exhaust pipes. Kimi Raikkonen and Sebastian Vettel can only wish their weekend rides sounded this good.

Neither Raikkonen nor Vettel can shift as well as the latest and greatest version of Ferrari’s F1 transmission. Upshifts are crisp and clean with no lurching, but they also give a firm, polished boot to your backside when you’re on it. Downshifts are perfectly smooth and rev-matched. 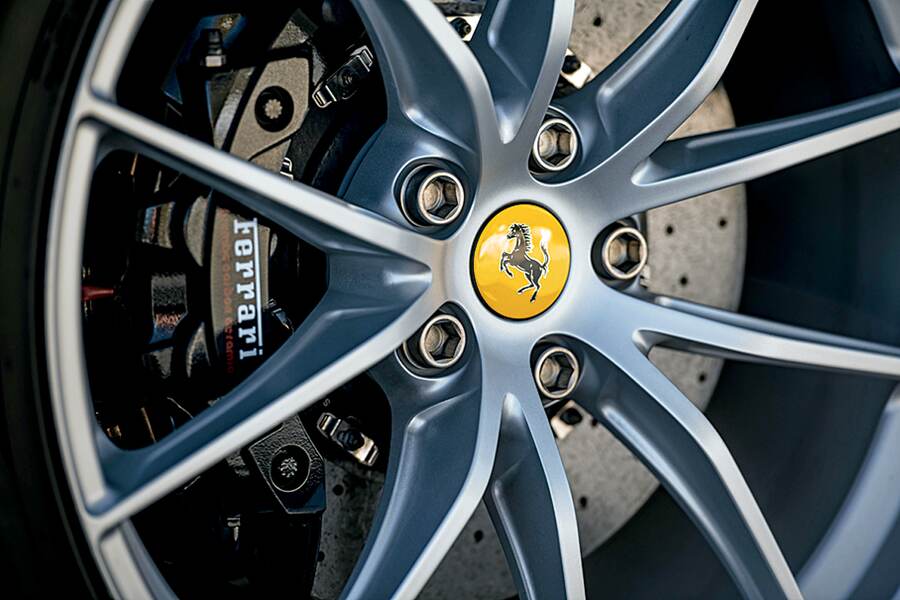 Even Auto mode is fantastic. Drive the 812 easy and the transmission smoothly melts between gears as unobtrusively as the Turbo 400 in your grandmother’s Buick. Drive hard and you get crisp upshifts right where and when you want them; the gearbox also divines your intent, and road conditions, to deliver barking quick downshifts. It’s as if your brain is connected directly to the transmission’s computer.

As usual, the steering wheel-mounted manettino offers a variety of drive mode choices, from Winter to Race, as well as the option of shutting off altogether the stability and traction control. I found Sport to be the most satisfying setting overall, as it allows the stability control and rear-wheel steering to do their things without over nannification. In other words, these systems make you faster and more precise without inhibiting your control over the car while also keeping you safer.

You’d expect the 812 to handle magnificently and it does. The massive 20-inch Pirellis on our tester proved very sticky, yet quiet, and the latest, greatest magnetorheological suspension adapts to any condition. If you work long and hard enough, you can overcook the Superfast’s stratospherically high cornering limits, but that’s not the fun part; the magic is how quickly and accurately you can corner near the limit with the car remaining confidently neutral. The Ferrari handles so well and delivers its performance so easily, it makes a fair driver look great and a great driver look like a Formula 1 piloto. 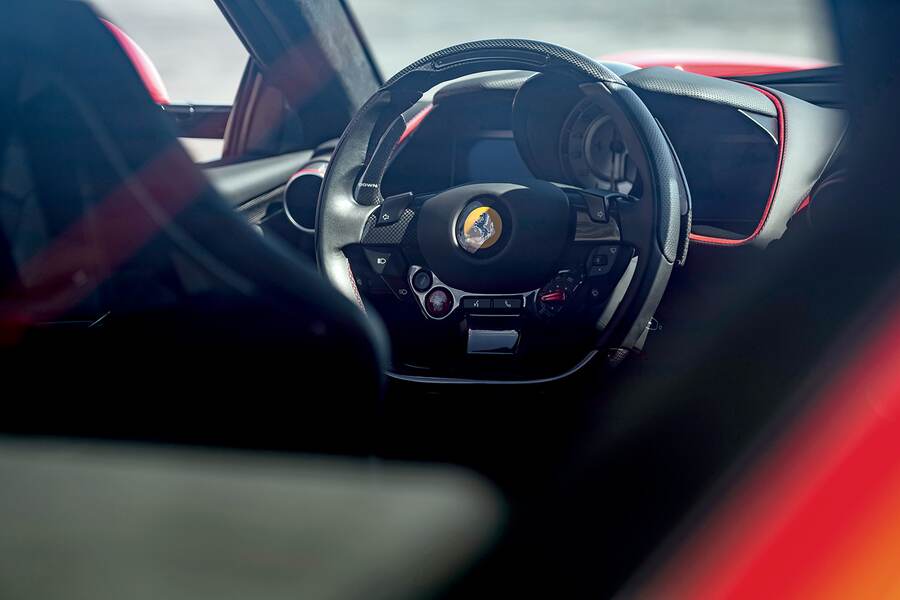 The computer-managed dampers are always reading the road and the driver’s commands for superb body control, while the new electric power steering provides more and better feel and feedback than you’d suspect, always telegraphing the front end’s plans. It’s not as feelsome as the F12’s hydraulic system, but that’s hardly a nit worth picking in the bigger picture.

And brakes? These pizza-pan-sized carbon-ceramic rotors, with their attendantly large Brembo calipers, are all you’ll ever need. The pedal is firm yet progressive, again attuned to your brain and pedal pressure, giving you just the stopping power you want to dial up. Plus, on public roads at least, you can’t fade them. I tried, and discovered that multiple full-pedal high-speed stops don’t faze them one bit.

For all of its scintillating performance, the Superfast remains a proper Gran Turismo. It’s supremely comfortable and relatively quiet (as long as you’re not too deep into the loud pedal). All-around visibility is excellent, and the trunk is relatively large and flat-floored. Ride quality resides on the supple side of firm: absolutely sporty but never over the top. And when you invariably encounter a really rough road surface, pressing the suspension button on the steering wheel dials back the shock firmness to smooth out the bumps while still keeping the body well in check. Feel like driving from LA to Boston just for the chowder? You’d do it happily and in comfort in this car. 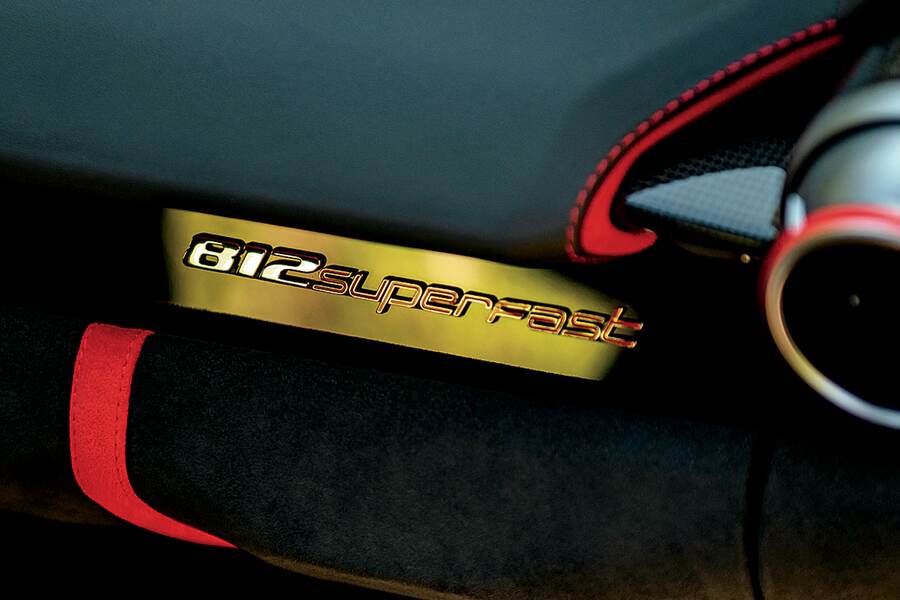 How to sum up the fastest, most powerful front-engine Ferrari ever? It’s all in the name…and the Superfast might also just be the best car ever to roll out of those storied Maranello gates. 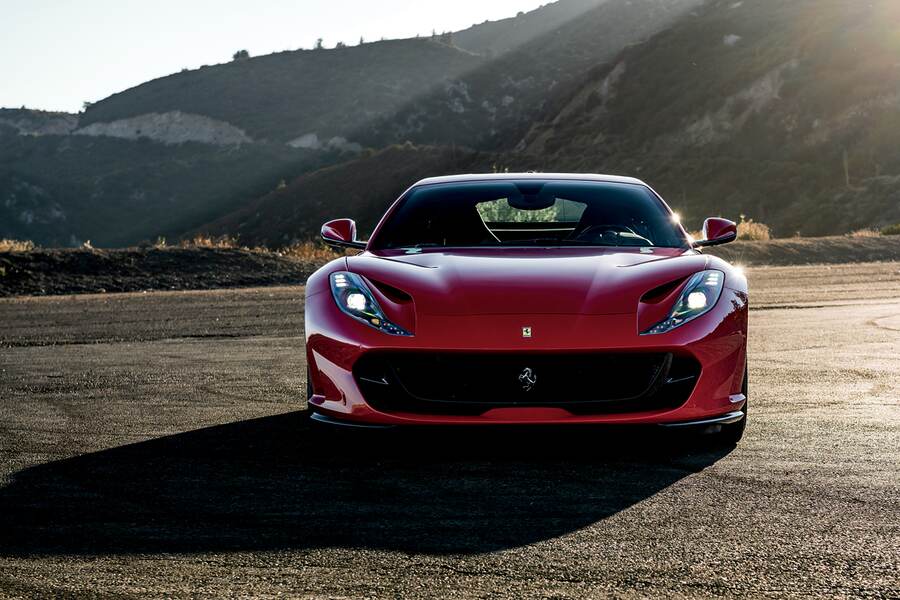 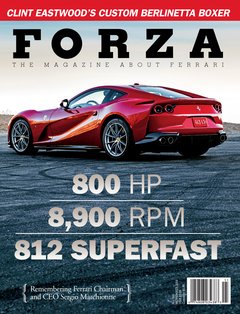