What do you get when a German speed shop works its magic on an Italian supercar? The 772-hp 488 N-Largo. 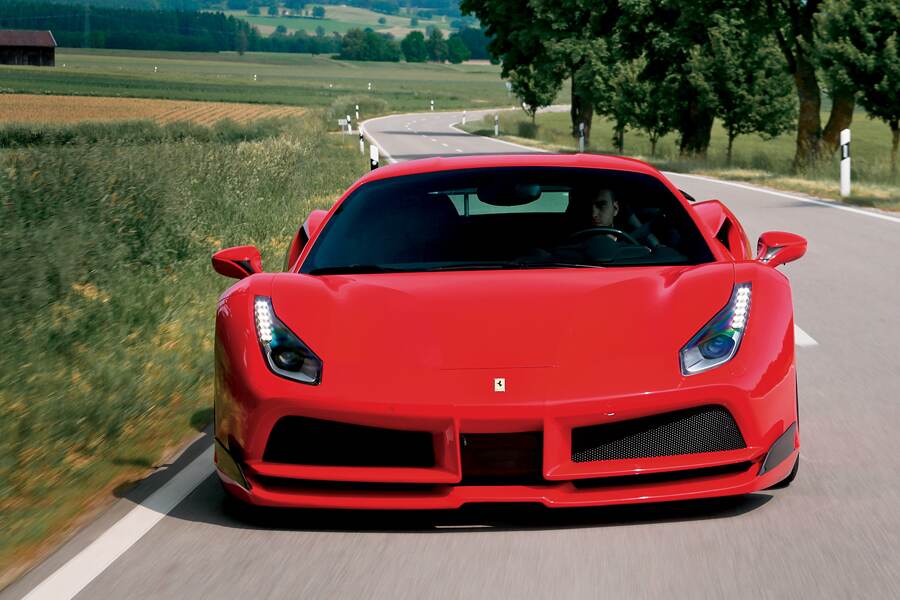 Story and Photos by Ian Kuah

In the good old days before Ferrari adopted turbocharging for its V8 engines, you could expect a machine that looks as purposeful as the Novitec Rosso 488 N-Largo to spit fire and brimstone from the moment you pushed the red Start button.

Today, however, things are more cool, calm, and collected. Despite its aggressive visage, the second Novitec model to receive the widebody treatment [the first was the F12 that appeared in issue #131’s “Eyes Wide Open”—Ed.] is the epitome of aural restraint, thanks to the muffling effect of two big twin-scroll IHI turbochargers and their attendant pipework and intercoolers.

That is not to say that this red bombshell does not have a pleasing sound track, specifically a slightly amplified version of the factory 488’s sonic concerto, with a touch more basso profundo. It’s clear, however, that Novitec’s fully insulated sport exhaust (made from Inconel in its most sophisticated form) is tuned more to reduce back pressure and liberate a few more cavallini than to set any new records for spine-tingling ear candy. You can thank the vagaries of the European drive-by noise regulations for this. 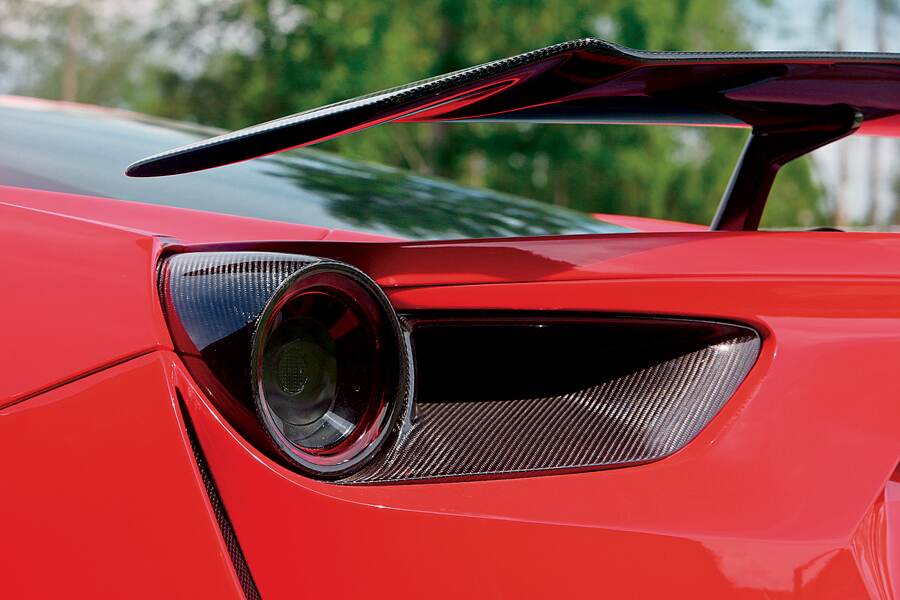 Of course, this impression comes when the exhaust’s optional electronically controlled flaps are closed. Open them with the flick of a switch, and the glorious wail of the flat-plane-crank motor, which culminates in a race-car-like scream at the top end of the rev band, tells you this a thoroughbred Ferrari.

While those turbos somewhat mute the song of the stock 670-hp engine, they are a godsend for tuners like Novitec. Where a new ECU and exhaust might net 25 or 30 hp in a normally aspirated engine, these same changes to the 488 engine have boosted output to a whopping 772 hp at 7,950 rpm, along with 657 lb-ft of torque at 3,250 rpm compared to the factory’s 560 lb-ft. This in turn pushes top speed to 212 mph, a 7-mph increase, despite the car’s wider bodywork.

Novitec’s engine work is based around two N-tronic plug-and-play control modules, which are integrated into the car’s electronics and remap its fuel, ignition, and boost pressure parameters, with no expensive internal changes to the V8 required. Besides increasing output, these modules allow the company to tailor the power and torque delivery as desired. 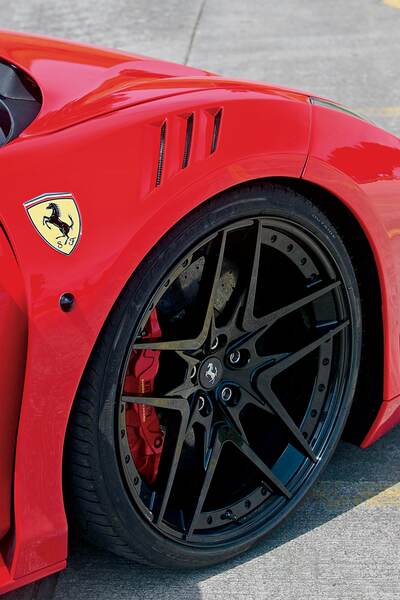 Most performance-car manufacturers, such as AMG, BMW M, and Porsche, adjust their torque curves to peak fairly low in the rev band, then plateau through the midrange. This delivers maximum flexibility in daily driving and helps fuel economy.

Ferrari, on the other hand, wanted its turbocharged engine to have the high-revving power delivery of a normally aspirated one. So, the software gurus in Maranello designed clever algorithms to limit torque output in the lower gears (which also offers the benefit of not overwhelming the rear tires with a wave of torque at low rpm). In practice, this means that maximum torque is only delivered in seventh gear, with the torque curves in fourth, fifth, and sixth gears progressively ramping up to that level on the way.

With even more power and torque on tap, the Novitec engineers wisely chose to closely mirror the factory’s output curves. Thus, the N-Largo’s power delivery feels just like the stock 488’s—except for the fact that you are going down the road a heck of a lot quicker for a given throttle opening. With those 657 lb-ft waiting in the wings, you don’t have to use much accelerator travel to build up substantial speed in the blink of an eye. Needless to say, you have to have your wits about you in areas with low speed limits! 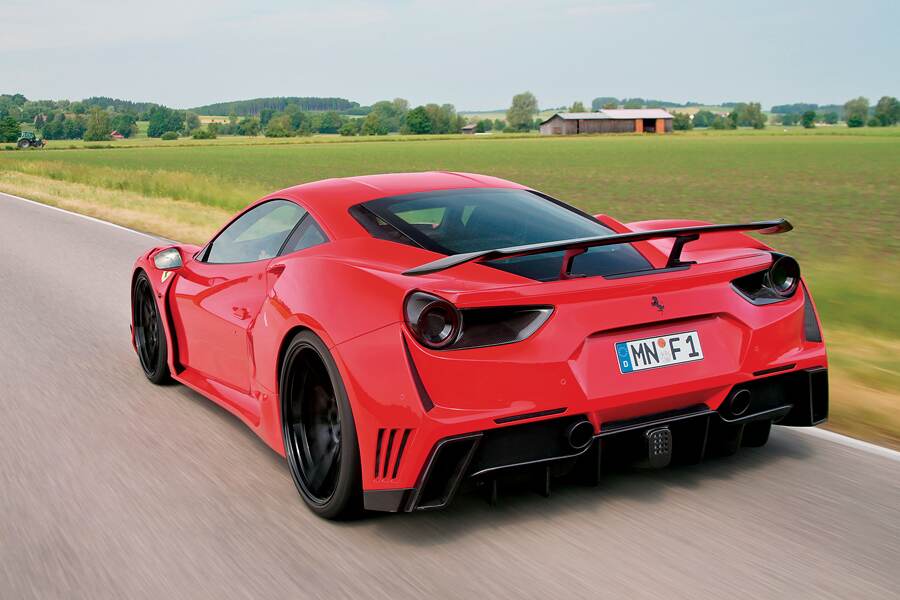 Where you can use full throttle in the lower gears, the Novitec 488 N-Largo delivers all the fireworks you’d expect, but in a smooth and progressive way. In other words, while it feels rocket-ship fast it is not at all a wild animal, the big numbers jumping off its spec sheet notwithstanding.

Impressively, the modified Ferrari’s ride is equally civilized. The stock 488 impresses with its exceptionally good ride quality, and on the fast, sweeping country roads around Novitec’s Bavarian headquarters the N-Largo suffers little degradation in its ability to absorb road-surface imperfections. This despite the wider wheels and tires and a 35mm drop in ride height courtesy of shorter, stiffer springs.

This surprising level of comfort is totally at odds with the extroverted, eyeball-grabbing exterior. However, with a stock 488 already in danger of scraping its underside on speed bumps and ramps, N-Largo customers should automatically tick the box for the company’s optional hydraulic front lift system, which raises the nose by 40mm. 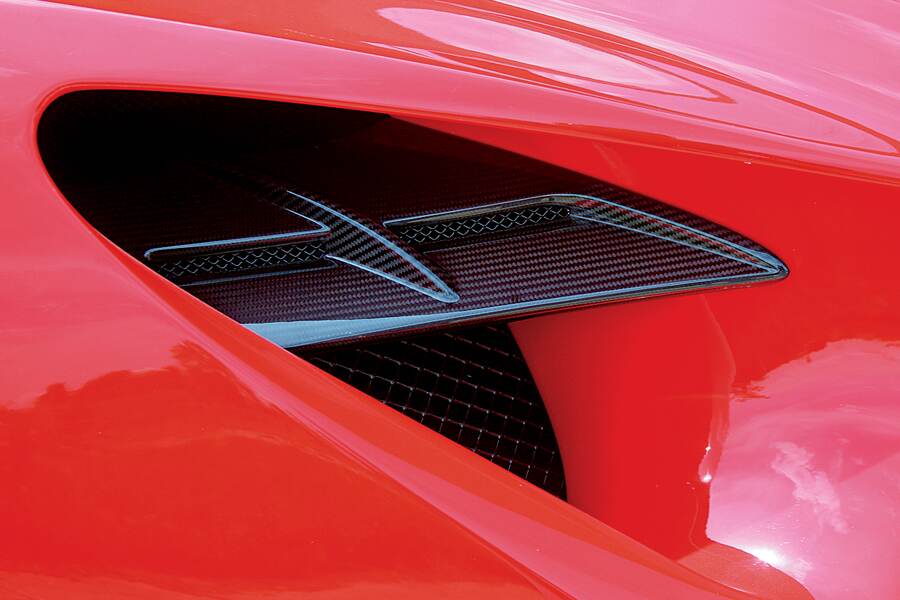 Novitec’s carbon-fiber bodywork is as impressive for its fit and finish as it is for the way it aesthetically integrates with the factory lines. The kit gives the 488 N-Largo an overall width of 79.1 inches, some 5.5 inches wider than a stock 488 at the rear axle. Novitec even created bespoke wheel-arch liners, which fit the wider arches perfectly to prevent undue aerodynamic disturbance, and make room for the lightweight 9×21 and 12×22-inch three-piece forged wheels shod with 255/30 and 335/25 rubber. (Impressively, the N-Largo is no heavier than a stock 488.)

Moving to the front of the car, the new front bumper with its low splitter lip helps to reduce lift and was optimized in the wind tunnel. It is available either painted or left in naked carbon fiber. The front fenders were replaced with wider N-Largo components that feature race-car-style vents at the top to help extract heat from the brakes as quickly as possible. To satisfy TUV regulations, these (and all other new vents) have wire mesh stone traps.

Novitec’s extended side sills help to channel air down the car’s lower flanks in a way that reduces turbulence. The wider rear fenders incorporate much larger air intakes to feed the intercoolers, while the combination of the rear wing and larger underbody diffuser generates more downforce at speed. 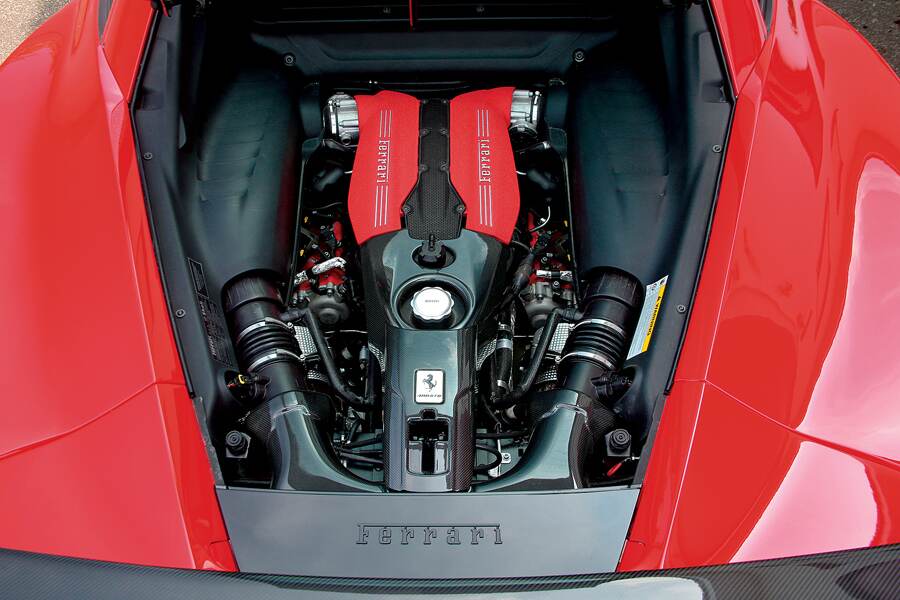 As already mentioned, for all its visual bravado and intergalactic pace, the Novitec Rosso 488 N-Largo is a pretty refined beast. For the vast majority of drivers who lack the skill set of Fernando Alonso, it is a user-friendly machine that will not spike your adrenalin levels every time you get behind the wheel. Unless, of course, you ask it to.

I can’t help but compare Novitec’s 488 to Ferrari’s earlier turbocharged supercars, the 288 GTO and F40. There’s no getting away from the fact the N-Largo’s widebody look is inspired by those venerable machines and even picks up some of their design cues, like the gap created by the trailing edge of the bulging front fenders, which Novitec’s stylist re-imagined for the 21st century.

The 488 N-Largo’s 772 horses would have been sufficient for an F40 race car back in the ’80s, and is about 60 percent greater than the roadgoing F40’s output. This is a frightening thought until you realize that aerodynamics, suspension, and braking prowess have advanced far more over the years than power output. Besides, where this pair of classic Ferraris suffers from old-school turbo lag, the progressive power delivery of the modern motor, as well as the 488’s fantastic chassis and electronic driver’s aids, puts everything in balance. 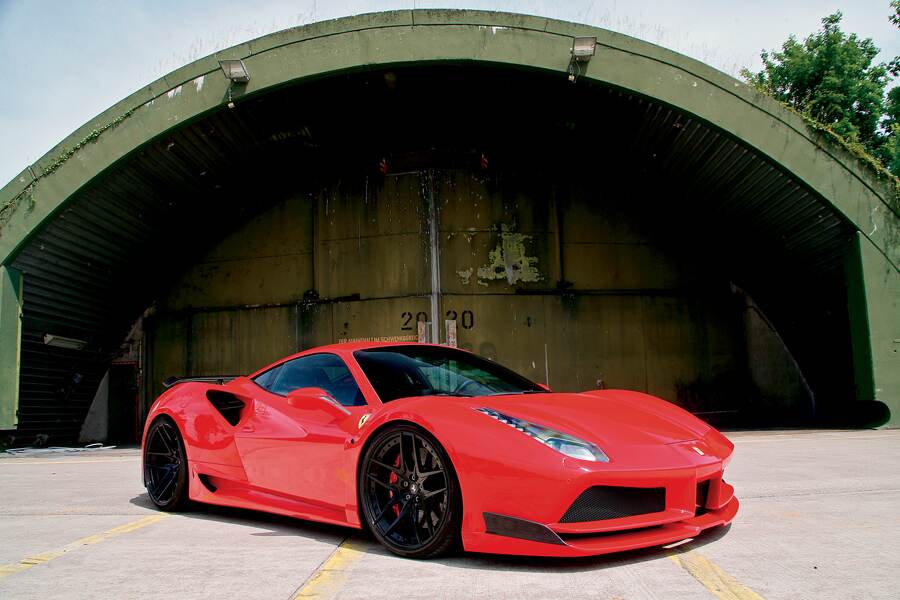 SOME PURISTS WILL SAY that such a car is no longer a challenge for the experienced driver, that there’s nothing to savor when one manages to tame the beast. I say the sensible will always seek to have Darwin’s Theory working for them rather than against them. Besides, I suspect they might change their tune after a drive in this beast, of which only 22 examples—11 GTBs and 11 Spiders—will ever be built. 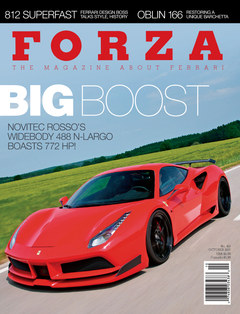