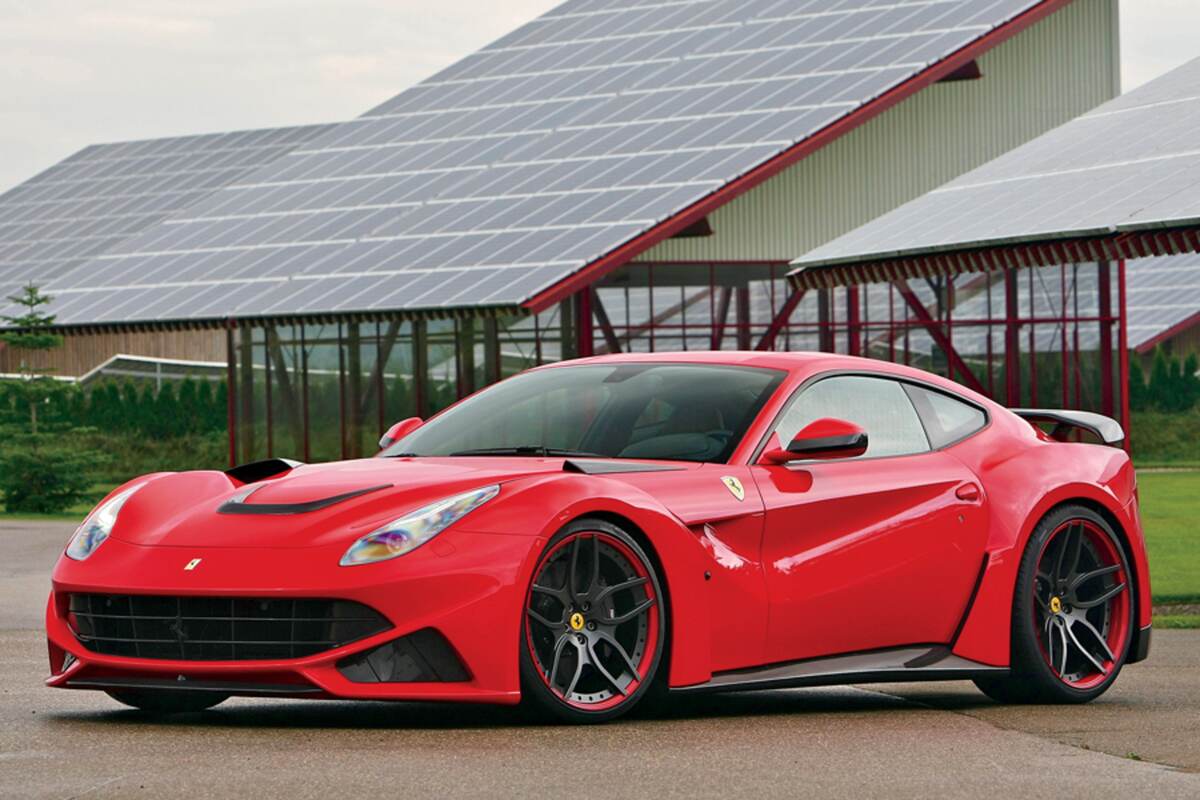 Story and photos by Ian Kuah

Back in the 1980s, wide-body conversions were all the rage. This was a time when the German tuners went to town, turning supercars and unsuspecting hot hatches alike into cartoon caricatures of themselves. But now, long after we thought this trend was dead and buried, Novitec Rosso’s N-Largo, a wide-body take on the Ferrari F12 Berlinetta, pops out of the woodwork.

Call it a throwback to the ’80s if you like, but the N-Largo conversion has a 21st-century refinement to its lines and detailing that has clearly moved the game on from, say, Koenig Specials’ Ferrari BB and Testarossa conversions of nearly three decades ago. Intriguingly, the new look was created by German designer Vittorio Strosek, the man who penned the original wide-body look for Willy Koenig back in 1983. (Strosek also helped coin the N-Largo moniker, which seems to mean N[ovitec]-Wide in Italian.) In this respect, the wheel has come full circle.

It’s quite surprising that this 100-proof, head-turning, eyeball-riveting visual theater was created by Novitec Rosso, long one of the most sober tuners. “From day one, the ethos of Novitec Rosso has been to offer our individualist clients subtle visual changes,” explained Dirk Moersdorf, the company’s effusive sales manager. “However, with the F12, we had specific requests from several of our overseas dealers and customers to do something distinctly different. Now that we have done it, we have no doubts that the F12 is the perfect car to receive this treatment. To be frank, we never even considered a wide-body conversion before on any of our cars, and it is certainly not something that will become the norm here.” 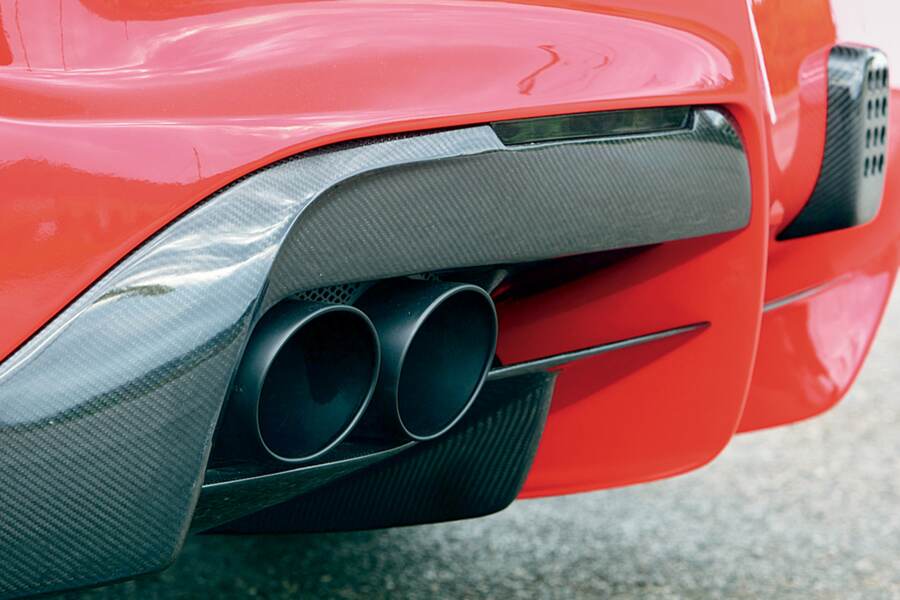 The N-Largo’s body extensions add 60mm (2.4 inches) and 110mm (4.3 inches) to the F12’s width front and rear, respectively. Like almost every modern car, current road-going Ferraris feature bolt-on front fenders; as a result, fitting the wider bodywork is simply a matter of swapping the stock fenders for the new carbon-fiber ones, which bolt onto the original mounting points.

Things are a bit more complex at the rear since, far from being an exercise in pure optics, the wider bodywork is accompanied by a wider track. For the N-Largo, Novitec fits its deeply dished, significantly offset NF5 forged wheels, in 9.5 × 21-inch and 12.0 × 22-inch sizes with 255/30ZR21 and 335/25ZR22 Pirelli PZero tires, to give the car a broader, more purposeful stance. However, these wheels, in combination with the company’s 25mm lowering springs, hit the factory’s rear bodywork.

So, in time-honored tuner fashion, the original wheel arches are cut away, the edges of the metal properly lipped and rust-treated, and bespoke arch liners fitted to keep road muck at bay. The wider carbon-fiber rear arches are then bonded to the metal bodywork. 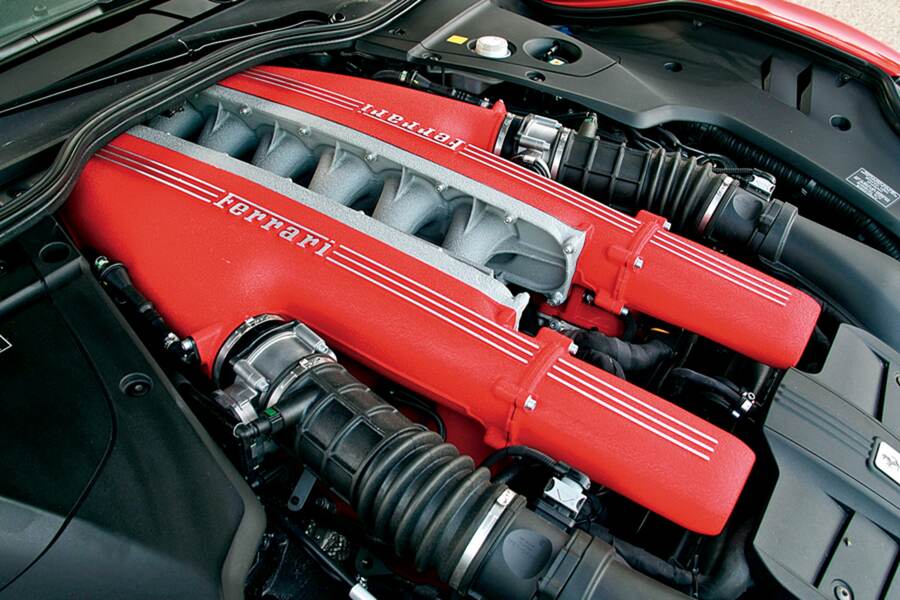 Many hours of meticulous blending work are required before priming and painting the new rear panels. Over the years, I have seen many body-styling conversions let down by inadequate preparation work, which is clearly visible under the paint, but the N-Largo’s finish appeared flawless. To ensure this level of quality, Novitec only performs such body and paintwork at its headquarters in Bavaria.

The N-Largo also receives a complete new, wider front section with a large air splitter, wider side sills, rear underbody diffusers and a fixed rear wing. All these components are made from carbon fiber, as are the purely aesthetic mirror covers.

NOVITEC IS BEST KNOWN for its powerful forced-induction systems, but you won’t find the infamous BiKompressor package here. “In the past, when standard Ferraris had 400 or 500 hp, we offered twin supercharger conversions with up to 705 hp that took their performance to major-league supercar levels,” says Moersdorf. “However, now that you can buy a standard Ferrari with between 600 and 700 hp, we do not see the need for massive power increases anymore, especially as the cars are rear-wheel-drive only.” 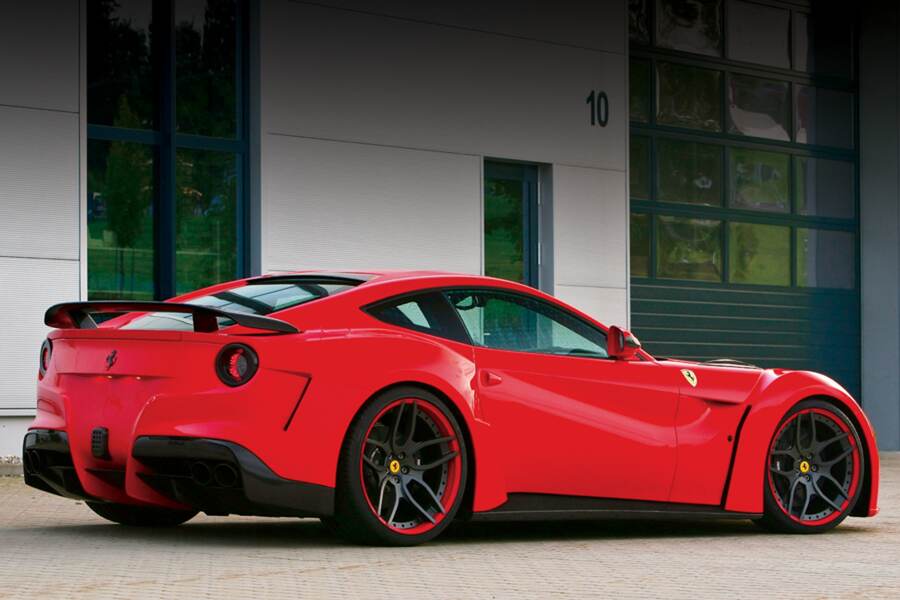 Most people who have driven an F12 would agree. With 740 hp at 8,500 rpm and 509 lb-ft of torque at 6,000 rpm out of the box, the F12 is the most powerful production Ferrari ever. But there will always be a few for whom too much power is just enough, and so Novitec set about unlocking more of the big V12 engine’s potential. “We concentrate on sharpening the car’s reflexes, with a modest power and torque increase, sharper throttle response and a more engaging exhaust soundtrack,” explains Moersdorf.

Novitec offers four states of engine tune, all of which are based around a freer-breathing sports exhaust and a remapped ECU. The owner who wishes to keep the stock exhaust can opt for a basic ECU remap that optimizes the fuel and ignition curves and raises the rev limit to 8,900 rpm. This electronic wizardry increases output to 763 hp at 8,500 rpm and 518 lb-ft of torque at 6,300 rpm, while the higher rev limit allows a 3-mph increase in top speed.

The next step up, which Novitec calls Stage 3, adds a stainless-steel sports exhaust that weighs 20 pounds less than the factory system, lowers back pressure, provides a deeper-chested sound track and is available with or without sound-flap regulation (i.e., moveable valves in the exhaust that open or close to alter noise and airflow). Power rises to 767 hp at 8,450 rpm and 522 lb-ft at 6,250 rpm. 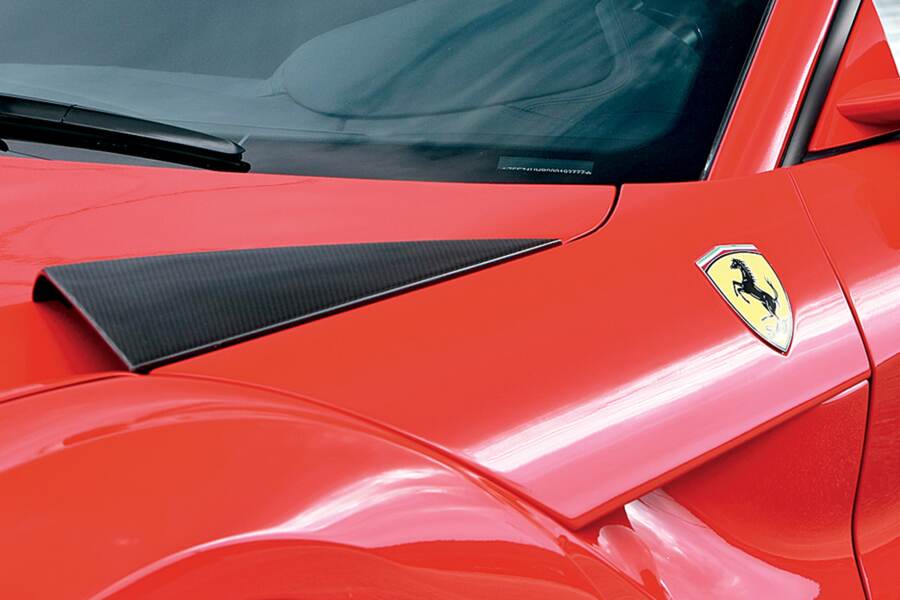 For Stage 2, the stock catalytic converters are swapped for less-restrictive 100-cell units and an exhaust X-pipe is fitted. This knocks off another nine pounds and raises output to 774 hp at 8,500 rpm and 528 lb-ft at 6,300 rpm. The German-spec N-Largo I tested featured this level of engine modification.

Finally, Novitec offers Stage 1 tuning for those who live in countries with modest emission and noise regulations. Deleting the cats entirely further reduces weight by another 6-7 pounds and raises output to 781 hp at 8,600 rpm and 532 lb-ft at 6,400 rpm.

MY LASTING IMPRESSION after first driving a stock F12 Berlinetta is just how accommodating the most powerful road car in Ferrari’s arsenal is to drive. Compared to its mid-engined siblings, this classic front-engine, rear-drive supercar is easier to place on the road, while its good ride quality, refined handling, light power steering, powerful and tractable engine, massive carbon-ceramic brakes and smooth dual-clutch gearbox all add to the user-friendly proposition. 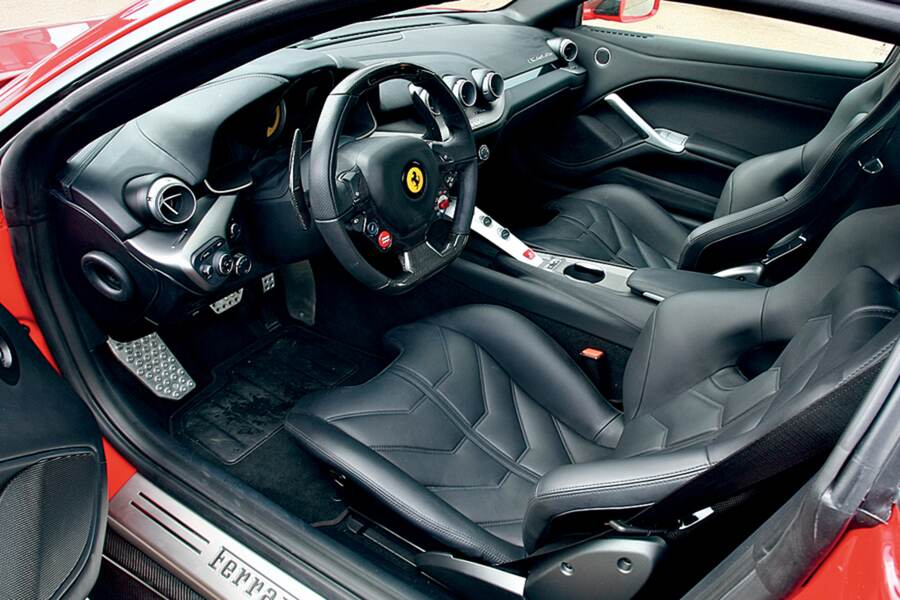 Similarly, at the end of a very fast and invigorating drive in the N-Largo, I was as much in awe as ever of the underlying Ferrari’s capabilities, and very impressed with the subtle way in which Novitec’s alterations strengthened the F12’s character. This is a good thing, since the excellent overall balance of Maranello’s finest is maintained.

It is hard to believe that a 6.3-liter engine can rev so high and so smoothly, but this V12 seems to defy the laws of physics every time I push the accelerator pedal to the floor. The engine is so torque rich that driving around town at 30 mph in fourth or even fifth gear is possible, with just a light push on the throttle resulting in real forward thrust. Novitec’s engine modifications are mostly felt at higher speeds, as the engine revs a bit more quickly, breathes a little easier and delivers a bit more oomph than the factory mill. The exhaust modifications also add some pleasing aural stimulation, as the stock F12, like all modern V12 Ferraris, is a bit too quiet for my liking; blame the European Union lawmakers for that one.

The new sport springs and rolling stock offer similarly subtle but appealing changes. The slightly larger footprint gives the Novitec cars a shade more grip, while the new springs noticeably reduce body roll in the turns. These changes also add a slight edge to the ride, but in no way compromises the F12’s ability as a long-distance cruiser. While it performs admirably on a twisting road, this is a Ferrari for munching the miles rather than truly chasing the curves—for that, the weapon of choice is unquestionably the 458 Italia. 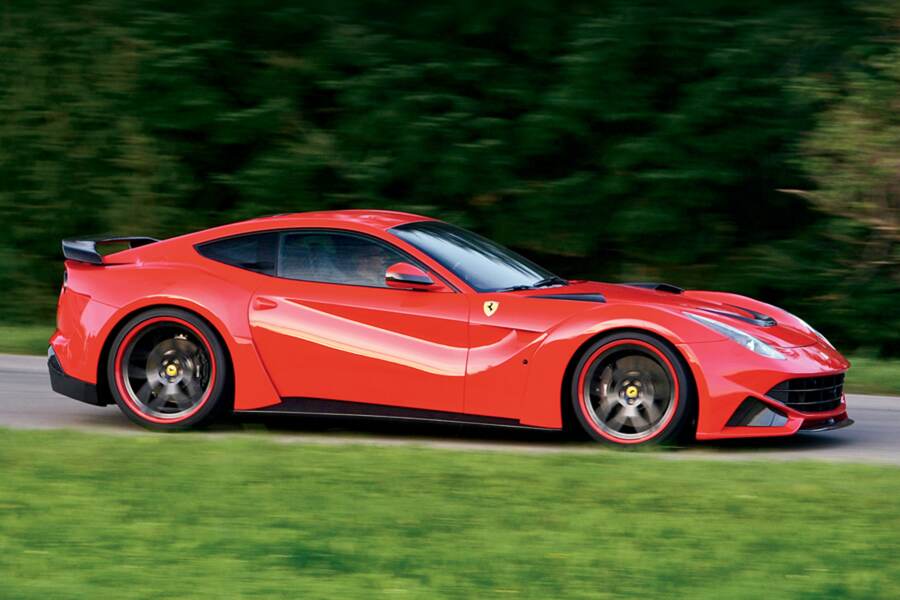 The only flaw in the dynamic mix is one that’s present in the stock F12. The power steering, while smooth as silk and nicely geared for easy use around town, does not weight up sufficiently on the open road. While feel and feedback are excellent, it remains too light at high speed, not delivering sufficient fingertip resistance to instill real confidence when turning into a fast bend on a country road, or an autobahn sweeper at big speeds. I had hoped that Novitec’s wider rubber would ameliorate this to some extent, but it does not.

For the extrovert owner who wants his Ferrari to match his personality, Novitec’s N-Largo might be the perfect choice. (For more restrained F12 buyers, the company’s engine and suspension modifications and wheels are available separately from the wide-body conversion.) This is a car that simply cannot be ignored, whether it is stationary or on the fly. The ’80s may be back, but now they’re better than ever. 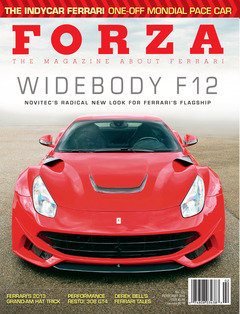