This PF Cabriolet proudly wears the scars caused by decades of neglect.

Photos by Rob Till

If you think of a Ferrari 250 GT, most associations that come to mind will likely involve events such as the Pebble Beach concours and fancy auctions where these pristine, gleaming vintage ponies command millions of dollars. Or, maybe, vintage tours and races across the globe, where the legendary 3-liter V12 can sing freely and owners and spectators alike can enjoy the sight of these cars being used as Enzo intended.

And then there’s this 250 GT, a 1962 Series II Pinin Farina Cabriolet (s/n 2307GT), the only such car currently living in South Africa. As I walk around the Ferrari, its history is immediately visible: There are several dings and dents in the sheet metal, while the paintwork is excessively cracked behind the cabin.

“It stood outside, sometimes partially covered, from around 1983 until we bought it around four years ago,” says Russell Haselau, who maintains the Ferrari for its current owner. “You’ll notice the two circular stains above the front bumper. At some point in the car’s past, reflectors were fitted here. The car spent some time in Zimbabwe, where front reflectors had to be fitted according to local legislation.” 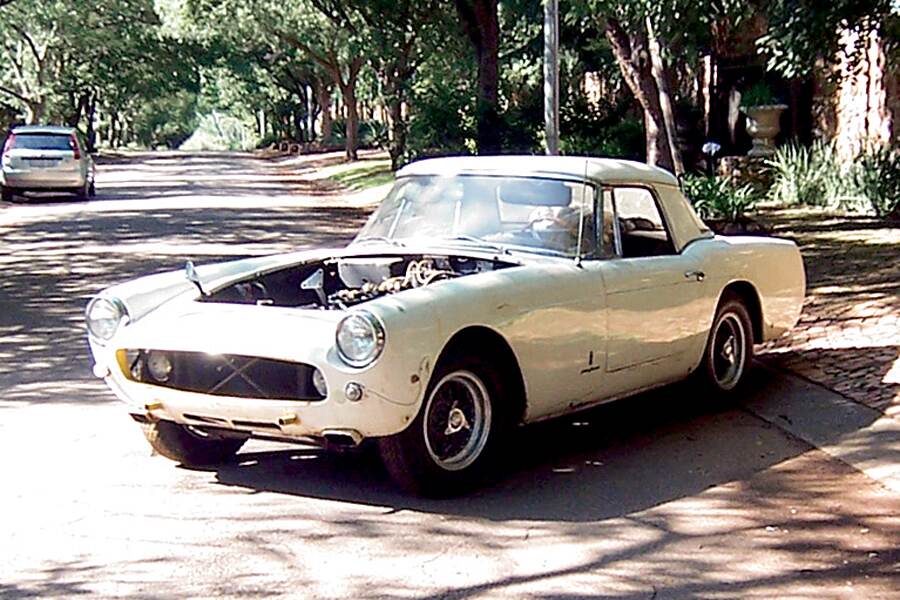 It gets worse. Not only had the Ferrari essentially been abandoned to the elements, but the previous owner had embarked on his own half-hearted restoration prior to his death. “The car was about 75-percent stripped [when purchased from his estate],” Haselau continues. “As we thoroughly searched through the garage, several boxes and shelves, however, we fortunately found almost every part.”

That included the car’s original ashtray. It was found on the previous owner’s veranda—where he used it as an ashtray! Needless to say, that rare item, bearing the crossed flags of Ferrari and Pinin Farina, has been returned to its proper place between s/n 2307’s seats.

THE NEW OWNER DECIDED not to embark on a nut-and-bolt restoration, which would keep the Ferrari off the road for two or three years. “I had been chasing this car for about 15 years,” he says, “and I don’t think I’m going to restore it. I don’t want to waste driving time with the car by having it sitting on blocks while being restored!” 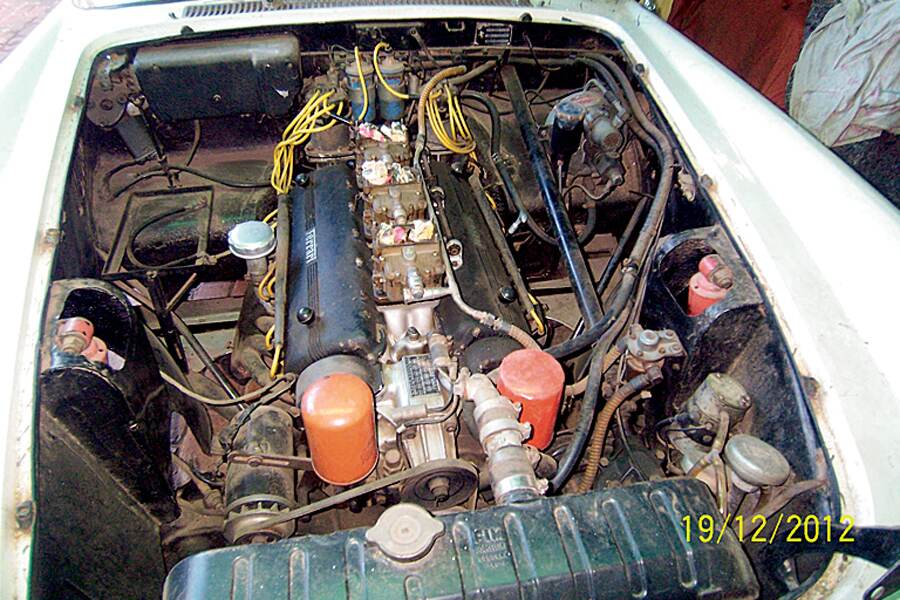 This doesn’t meant bringing the car back to life was quick or simple. “It is not always easy working on such an old Ferrari,” explains Haselau. “With other cars you can do a lot of research on the internet, but there is not a lot of information or details out there regarding working on or maintaining these type of cars.”

The first step was to drain and refill all the Ferrari’s fluids. Next up was the braking system, which was overhauled. The original painted wheels were still fitted, but they had been damaged by errant swings of the hammer used to remove and reinstall the dual-ear knock-offs. Period-correct chromed replacements were ordered and fitted with equally period-correct Michelin 185VR-15 XVS radial tires.

A more challenging task involved resuscitating the gearbox. “The selectors needed some work,” says Haselau. “It has some rubber bushes, and all of them were worn out. We also restored the cooling and ignition systems. Then we replaced a number of the exterior lights. These were but a few of a small number of parts of the entire car that we could not find when we bought the car. Following a trip to Europe we were able to source most of these lights. Then we replaced the belly plate, which was also missing.” 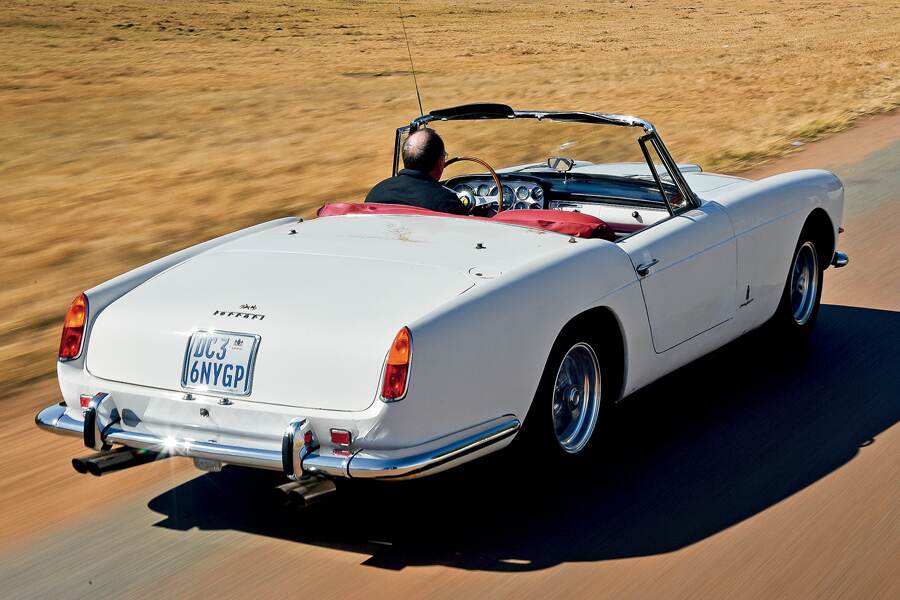 It was during this partial restoration that more details about the Ferrari’s history were uncovered. Below the current beige paint there’s a layer of yellow; it’s clearly visible around the front grille. Further investigation showed that when the car arrived in South Africa, from Italy, in 1967, it was yellow. However, checking the car’s serial number against Ferrari’s records revealed the 250’s original color was actually Shell Grey, meaning the car wears no fewer than three discrete layers of paint.

The focus then shifted to the Ferrari’s interior. The seats and other trim areas, such as the transmission tunnel and lower part of the fascia, were reupholstered. Finally, a new soft top was fitted.

The PF Cab came with a rare hard top, which gives the car a very coupe-like look when fitted. That’s not too surprising, since the coupe and Cabriolet are essentially identical below the waistline. Initially, there was very little interest at the factory to build a topless version of the 250 GT PF coupe; Ferrari was already producing the prettier Series I 250 GT PF Cabriolet. But the company’s North American distributors pushed for the production of such a model, which was unveiled at the Paris Motor Show in 1959. The Series II PF Cab remained in production through 1962, with 202 examples made.

I PULL THE DOOR OPEN then slide inside. These red leather pews are suitably comfortable, although, unlike in modern cars, there’s no support for your upper body; the seat’s backrest ends just below my shoulder blades. But, you wouldn’t expect it any other way.

The rest of the red leather interior contrasts starkly with the car’s off-white exterior and dash face. Not only because of the color itself, but because of the amount: The seats, transmission tunnel, shift gaiter, footwells, and door cards all wear this bright hue. The carpet’s red, too.

Very close in front of me is the simple wood-rimmed three-spoke steering wheel, replete with the black Prancing Horse on a yellow background in its center. Behind the wheel sit seven (!) circular dials: the large speedometer and tachometer bracket a small oil-pressure gauge, while a four-square cluster of oil and water temperatures, fuel level, and analog clock resides to the right. S/n 2307 was originally earmarked for Italy, as evidenced by the Italian words dotted about the cabin; for instance, the oil-pressure gauge reads olio. 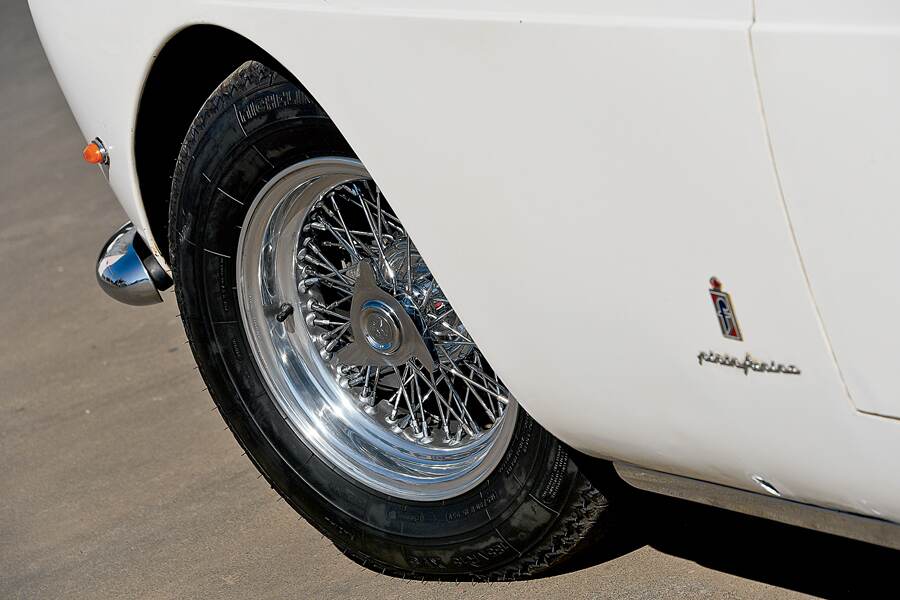 I sit very close to the steering wheel and enjoy a very commanding view of the road ahead. Through the windshield I can see the rear of the hood’s modest air intake, a small reminder of the performance potential underneath the hood. The gear lever is perfectly positioned to my right on the raised transmission tunnel.

While I’ve driven a number of 1990s, 2000s, and 2010s Ferraris, this is my first time in an Enzo-era car, and there are a few things to learn. To start the car, you first put the key upside down in the ignition, turn it clockwise 180 degrees, then press inwards. The 3.0-liter Colombo V12 immediately catches and settles into a smooth idle, burbling through the car’s quad exhaust tips.

Once underway, I discover the engine is fairly tractable, although you can’t really expect it to pull from anything below 1,500 rpm. As I slowly put my foot down, the engine quickly gains momentum, the deep V12 sound getting slightly harder. Pottering around in traffic clearly isn’t the engine’s strong suit; it wants to rev and needs an open road. 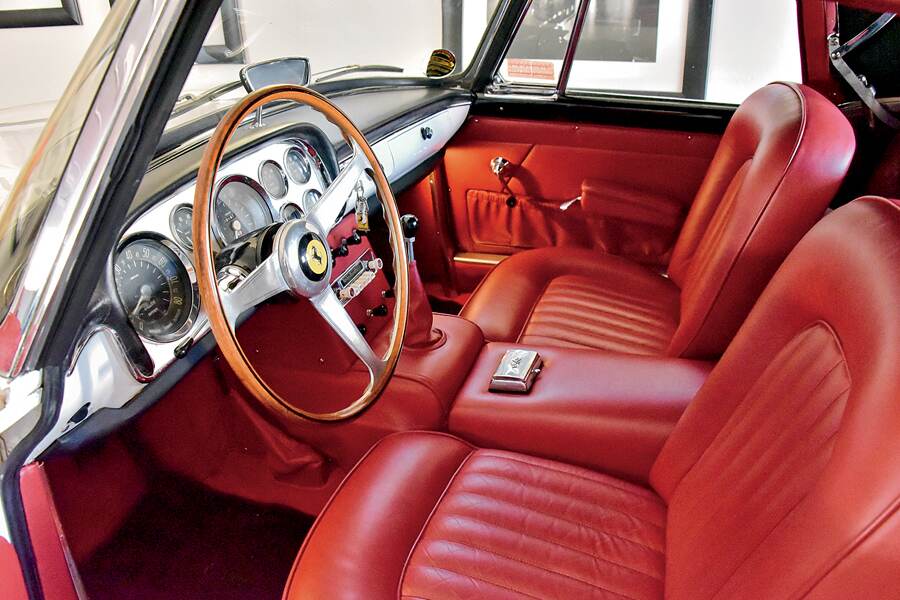 Out of respect for the 63-year-old engine, which so far as anyone knows has remained untouched inside since it left the factory, I upshift at roughly 5,000 rpm. In period Ferrari rated the engine at 240 bhp at a significantly higher 7,000 rpm, yet the 250 GT still moves along quite briskly, helped by the car’s 2,315-pound dry weight. I can only imagine how punchy and aurally enticing it must feel over that final 2,000 rpm.

While the engine revs easily, changing gears requires solid input from my right arm. However, the shift action is wonderfully engaging, a pure mechanical metal-on-metal feeling as the transmission slips between cogs. In its directness and tactility, the shifter is not unlike that of an F40 or F50, although without those later cars’ shift gates to slow down the action.

When it’s time to slow for the turns, the reconditioned brakes feel strong and totally capable of scrubbing off speed. When I rotate the large steering wheel, the Ferrari changes direction with minimal effort. 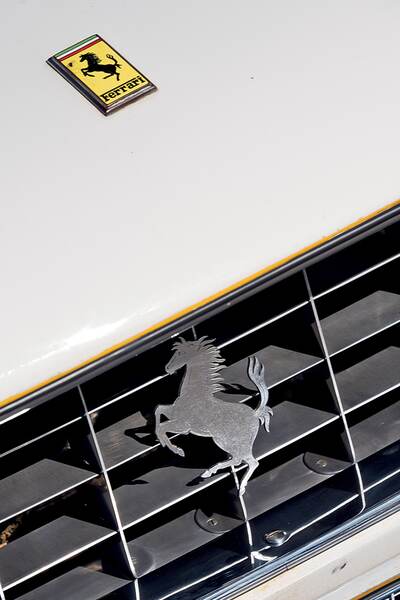 For most of the day, we drive with the roof down, which only heightens the sense of speed and involvement. Johannesburg can’t be compared to Italy, but I get a sense how it must be to drive this car through the hills of its home country. It’s an enlightening experience, one that immediately brings home why these vintage cars are still revered today.

“The 250 range is one of the most special Ferraris that ever came out,” agrees s/n 2307’s owner. “It was a visionary engine, it did a lot to establish Ferrari back in the day. Once you have become smitten with Ferrari, you compare every car with them. For me, it was the 250 LM that raced several decades ago at the 9-hour endurance race [at Kyalami] that kickstarted my interest and love for the brand.”

“Another highlight is the ride of the car,” he adds. “It actually drives better than some of the later Ferraris, such as the 365 for instance.” 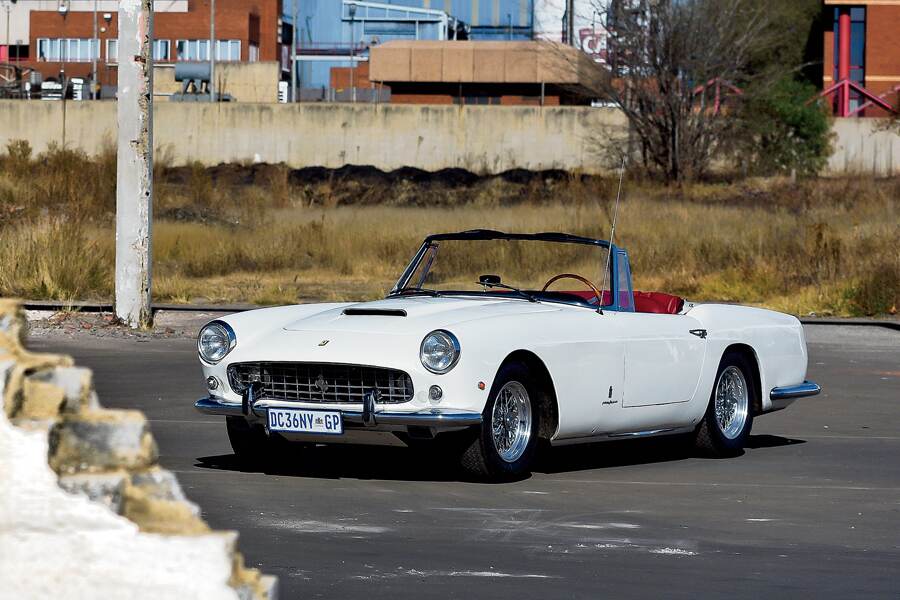 And drive it he plans to do. “It can be restored at any time in the future,” notes Haselau, but for now it is meant to be driven, something the car wasn’t able to do for many years.” 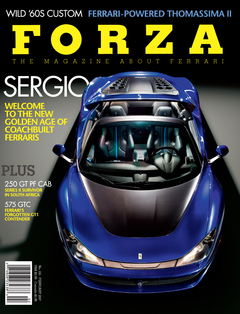