Retired by the factory after the 1980 F1 season, this 312 T5 found a new career in vintage racing. 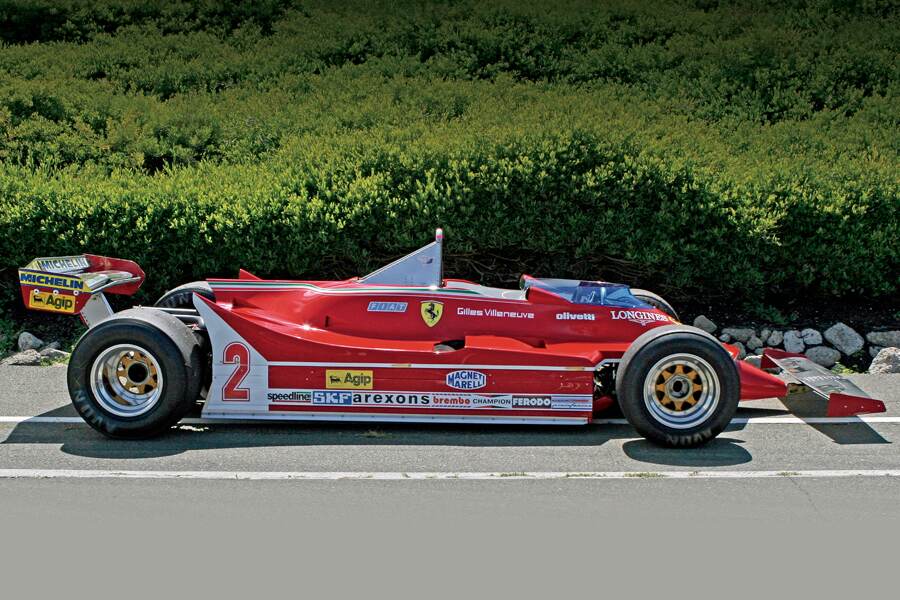 Scuderia Ferrari was flying high in 1979. Drivers Jody Scheckter and Gilles Villeneuve each won three races, with the former and the team claiming their respective World Championships. With the 312 T4 clearly the cream of the F1 crop, the updated 312 T5 was surely the horse to bet on for the 1980 season.

Maybe so, but odds makers and the tifosi alike were in for a bitter surprise. Quicker than the T4 but not as fast as the competition, the T5 struggled all season with ingrained breakage and grappled for grip on its fast-wearing Michelins. The ’79 champions finished tenth in the title chase—perhaps the farthest fall from grace F1 has ever seen—and, mid-year, Scheckter privately warned Ferrari of his retirement.

This 312 T5 (s/n 046) was Scheckter’s mount during that dismal year, but it’s enjoyed an astonishing prolific post-factory life. S/n 046 is the most raced vintage Ferrari F1 car in the world, with longtime owner Bud Moeller of Melbourne, Florida having competed with it for two full decades. 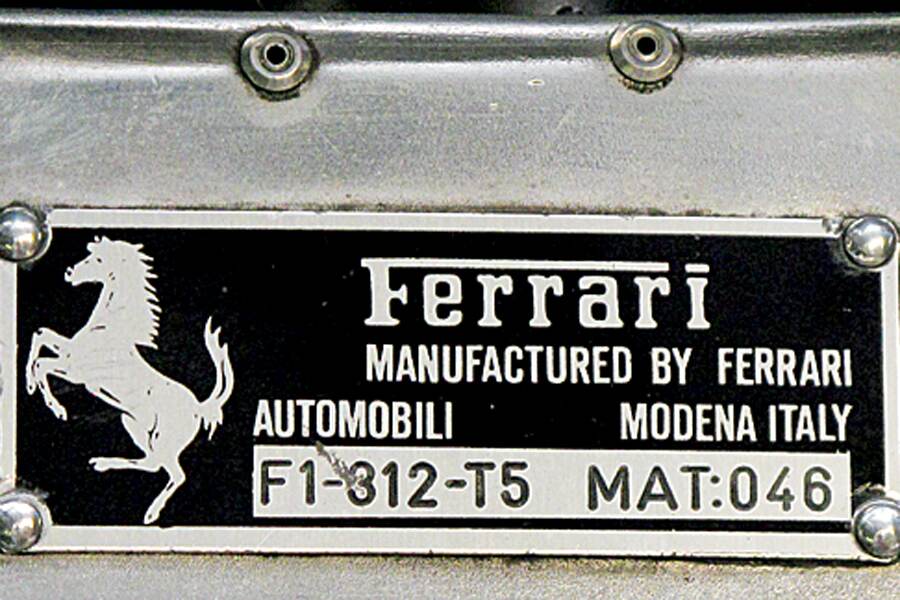 I first met Moeller in 2012, when he brought his other Ferrari F1 car, an F2003-GA, to Northern California’s Sonoma Raceway for an F1 Clienti event. Today we’re both back at Sonoma, but this time I’m watching the 61-year-old management consultant turned non-profit volunteer behind the wheel of the ex-Scheckter T5. The car has just been revived from its winter nap for the 2016 vintage F1 racing season—first, to Elkhart Lake in July, then to the Monterey Motorsports Reunion in August.

S/n 046, which has been geared to run over 180 mph for more leggy tracks, mesmerizingly blitzes the front straight and ascends the hill, articulating pure Italian aria in perfect pitch. But Moeller detects a stutter, and pits.

“It’s got a little electrical problem in the motor,” he tells me as the T5’s caretakers dive hands-first into the ignition tray of the Mauro Forghieri-designed, Lucas fuel-injected 2,991-cc flat-12. “We have this engine redlined at 11,200 rpm [1,100 fewer revs than in period] for more motor longevity, but it’s really struggling to get there. Normally it’s pretty crisp.” 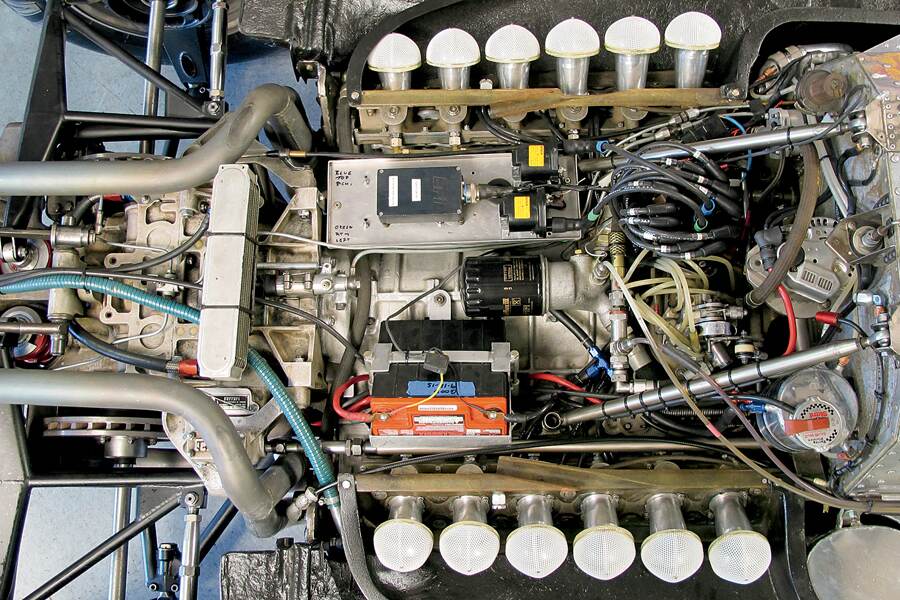 “The horsepower these engines make is limited by their ignition systems,” explains British-born Phil Denney, owner of PRD Engineering, who’s kept the T5 ticking for the past 21 years. “Every time a new system came on the scene, everybody scrambled to get it—because ignition controls compression, and compression controls the amount of power the thing has.”

Before Denney and mechanic Forrest Teran finish their fettling, I decide to ask Moeller about the similarities between Ferrari’s 312 T5 and F2003-GA. Not surprisingly, there aren’t many.

“We’re talking comparison of a 1980 car to one from 2003,” he begins, “and whether measured in real years or dog years, it’s a many generations difference. The T5 with H-pattern shift and three pedals is driven very much like any normal road car, except you heel-and-toe downshifts to match the straight-cut gears and you can skip the clutch on upshifts if you’re good at lifting the throttle precisely. Plus, the T5 has 515 horsepower. The GA’s got that, plus 400.” 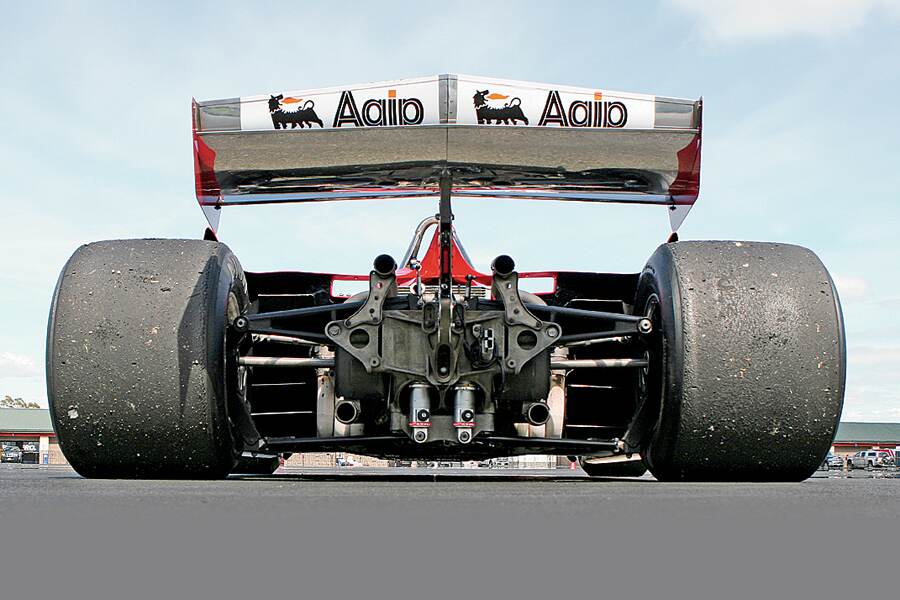 After a thumbs-up from Denney, the Ferrari howls back onto the track. Moeller’s clocking nippier laps now, but soon he’s in the pits again.

“We’re still struggling for grip,” he says, “and the motor is still not quite as crisp as we’d like. Next step is to put it on a dyno and check performance through different ranges and loads to identify what’s going on.” 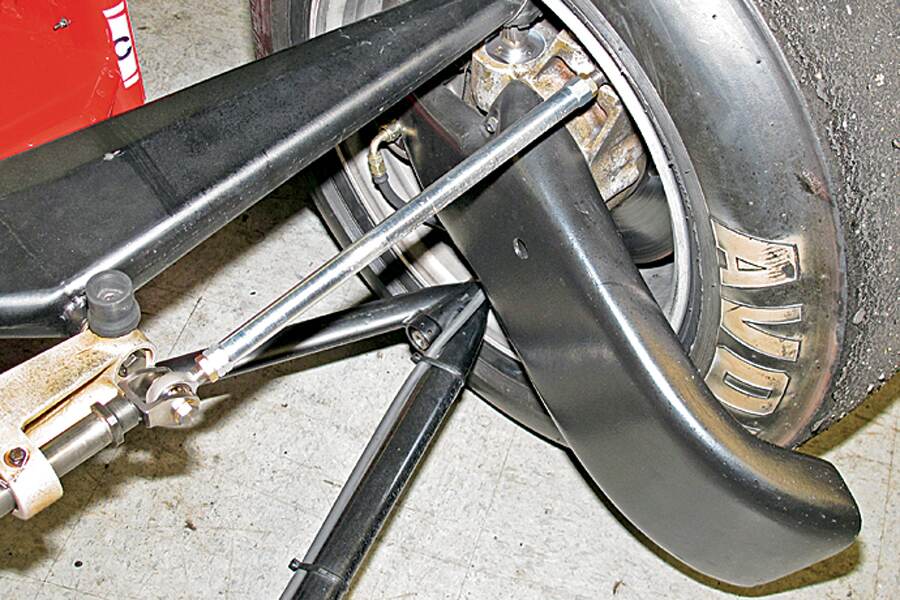 Ferrari retired s/n 046 after the ’80 season and, deferring to the original build sheets, re-liveried it to again carry Villeneuve’s name and number before passing it directly to Luigi Chinetti, Sr. When Chinetti died in 1994 at age 93, the Ferrari went to his son, Luigi, Jr. A year later, Moeller bought it. “My dream was being able to put together racing, Ferrari, and Formula 1,” he recalls, “and I got immersed in Ferrari royalty in a very fantastic way.”

Moeller spent a seminal week in Italy with Chinetti Jr. and other Ferrari luminaries hailing the marque’s 40th anniversary. A deal for s/n 046 soon evolved, and Moeller, who’d been racing a ’79 Ensign for a few years and was at the time business consulting in Singapore, mastered what he calls “the interesting challenge” of buying the T5 through faxes and wire transfers between far-flung countries. When it all came together, he recounts, “I showed up in Connecticut. They rolled the T5 out, fired it up, drove it a few feet and said, ‘Here it is. It’s yours.’” 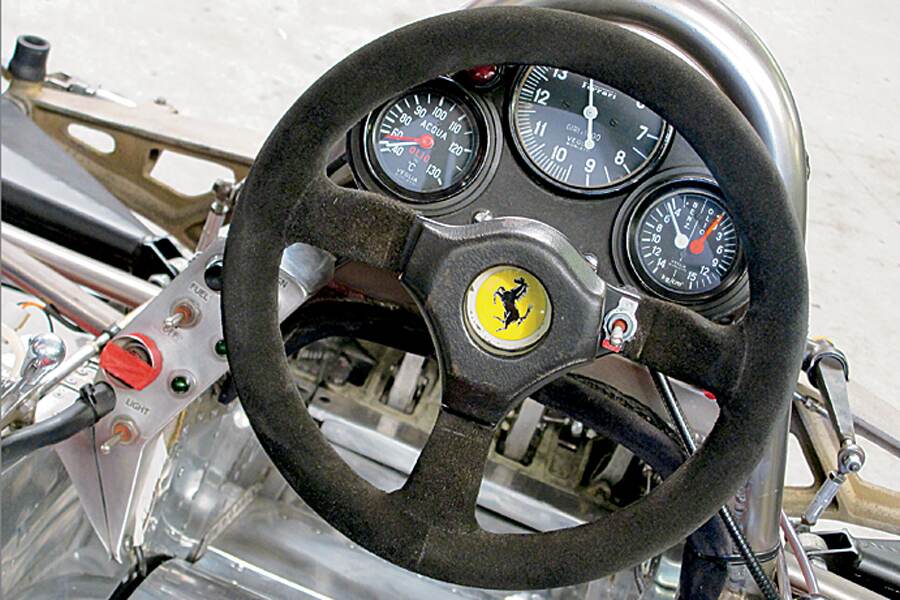 Moeller ordered “a light freshening in a shop run by a former Ferrari factory mechanic” in Italy, then for his first drive had the T5 transported to Watkins Glen—coincidentally the site of Jody Scheckter’s F1 debut, in 1972. “It was a bit like being on hallowed ground to know that Scheckter, in racing, and Villeneuve, in testing, had been in direct contact with this car,” Moeller says of that day. “I very quickly recognized that I was going to be a steward of this machine for a period of time, and it was my job to let people see it and hear it and enjoy it again.”

THE T5 WAS SOON VETTED race-safe by Steve Earle and his historic F1 group, and Moeller’s first race came—where else?—at The Glen. It wasn’t an auspicious debut.

“We had a terrible problem with the engine,” he says. “The distributor skipped a couple of teeth on the rubber belt that was driving it from the engine, and we realized the 15-year-old belt had not been replaced in Italy as part of the freshening. After we tightened it as much as we could, and got through the weekend, we decided to go over the car with a fine-tooth comb in order to make it race worthy.” 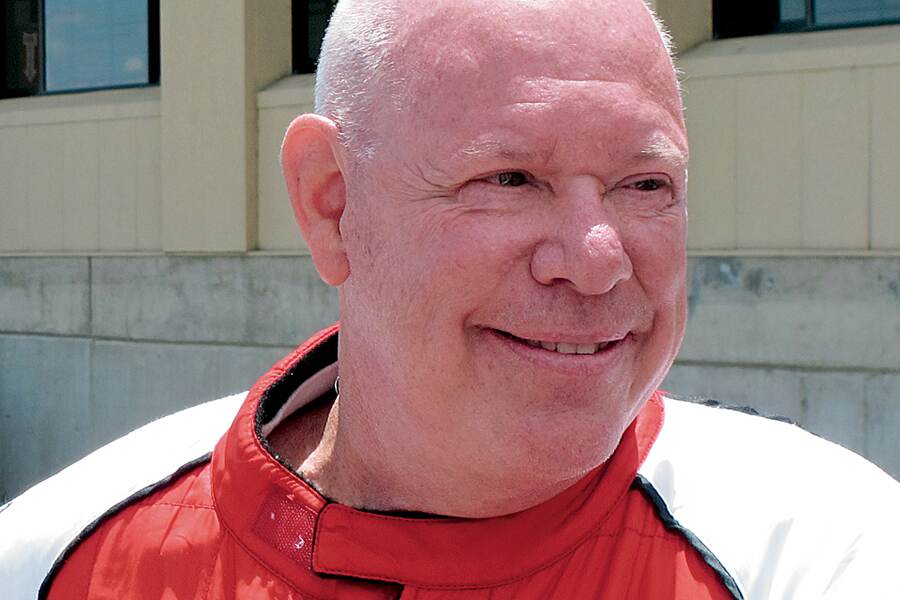 Enter Phil Denney, who’d been a race mechanic on Mario Andretti’s 1978 championship-winning Lotus and was already well-versed in the ins-and-outs of Moeller’s Ensign. Despite his decades of experience, the Ferrari required a long learning curve—everything from its flat-12 motor and unique transverse transmission (the T in T5) were deep secrets to practically everyone outside the factory. “By now,” says Moeller, “we probably have experienced everything we could with the T5, from mechanical to cosmetic, on how to set up and run this car.”

What does it take for Moeller himself, who’s at least twice the age of those F1 drivers in period, to do it?

“Four things,” he says. “Physical stamina. Visual acuity. Mental processing speed. Aerobic capabilities. We drive these cars very, very hard against one another, and wait to see who’s going to blink [first] before the corner. But nobody’s going to make a bonehead move.” 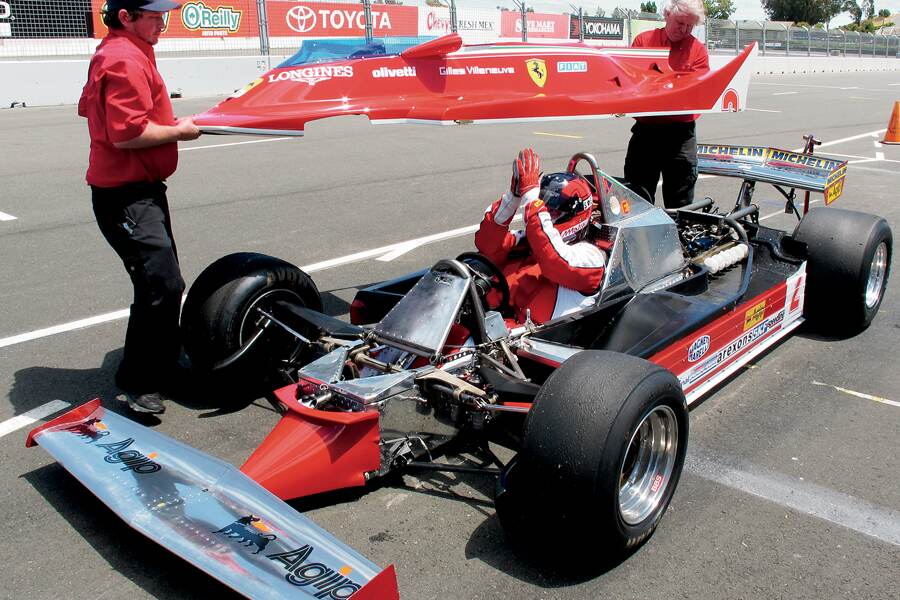 Part of the challenge is that, in U.S. vintage racing, ground effects aren’t allowed. “Skirts were a great device back in the day—they made the car into a super vacuum cleaner,” explains Moeller. “The faster you drove the more it stuck, [at least] until they all of a sudden let go. When you’re required to remove the skirts on these cars that have ground effects, it’s really driving in an envelope the car was never designed for. We constantly have to play with ride heights and wing angles to see if we can get back some of the traction we lose by having to have the skirts lifted up 40 millimeters.

“Today, the car handles in a very neutral fashion—smooth, easy to drive. I can put the tail out or have the nose plow depending on what I do with the throttle in any corner at any time, even pulling three and a half g’s. The challenge is, since the T5 was designed to run with skirts, the wing elements are really more to manage airflow through the tunnels and out the back of the car than they are classic wings to provide downforce.”

Even if s/n 046 isn’t run in exactly in the same configuration as when new, this 1980 Ferrari bearing Villeneuve’s name and number remains a Formula 1 icon perhaps like no other. Moeller has driven the T5 in Canada more than a dozen times during Grand Prix weekends and in historic events at Mt. Tremblant, and is always amazed at the attention it brings: “I can’t tell you the number of people who have come up to the car and literally knelt beside it, and started weeping, to see this part of racing history.” 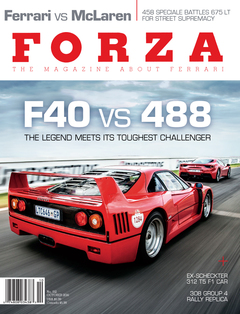