With 930 horsepower, virtually no suspension travel and neck-snappingly strong brakes, the F2003-GA demands much of its driver — but 57-year-old Bud Moeller wouldn't have it any other way. 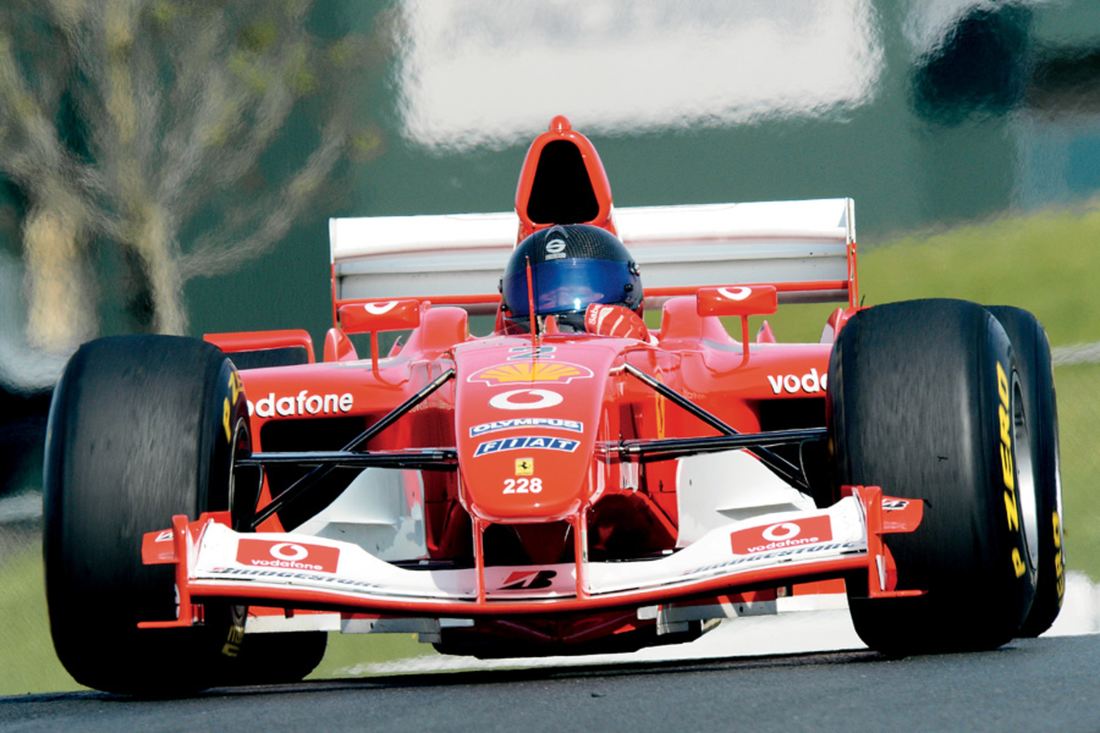 Photos by William Edgar and Ferrari

What’s not to love about Formula 1? The speed, the technology, the noise. It’s hard to think of anything more exhilarating than the sound and fury of a shrieking Ferrari F1 car unleashed. Except, of course, getting behind the wheel yourself.

Just ask Bud Moeller what it’s like to drive his F2003-GA (s/n 228), as this 930-horsepower, 1,100-pound road-going rocket ship pummels both his body and his senses. “The braking is absolutely violent, and the g-forces are incredible,” says Moeller of the F1 car’s carbon brakes. “Under severe slowing we do five g s, so your eyeballs actually bulge and tears will flick onto the inside of your visor.

“The car is very stiffly sprung,” he continues. “A lot of the movement you get is just out of the tires, because the suspension doesn’t move much at all. It’s like riding a horse trying to pitch you off everywhere it can. It will bounce my foot off the gas. I realized that when Marc and I were looking at the data, and he said, ‘You are still lifting in here.’ And I said, ‘No, I’m flat.’ So today, I just jammed it hard.” 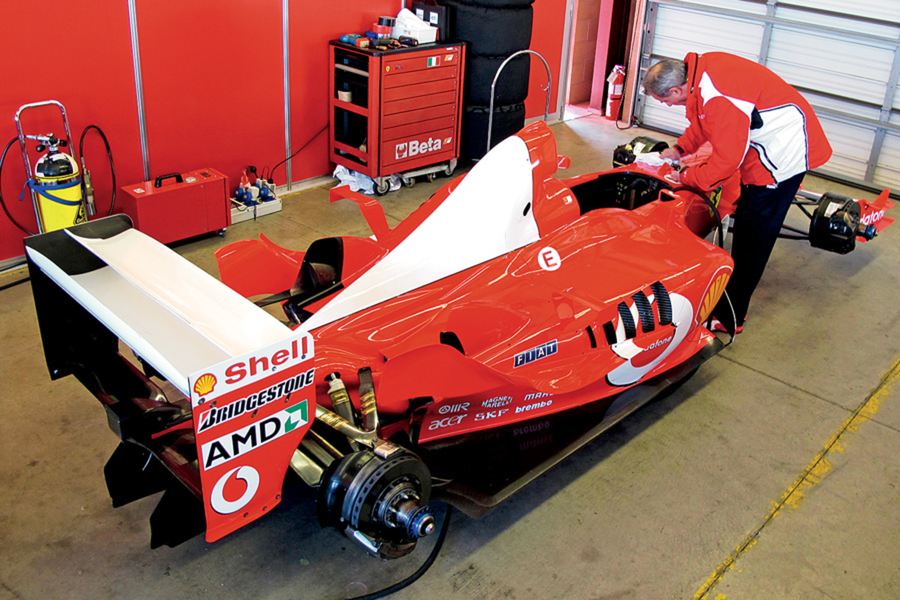 “Marc” is none other than former Scuderia Ferrari test driver Marc Gené, who has 36 Grands Prix (and an overall victory at the 24 Hours of Le Mans) under his belt. And the data? That’s the on-track, real-time telemetry recorded by the crew of Ferrari technicians that tend to both car and driver. Welcome to the world of F1 Clienti, where mere mortals with means can pilot dauntingly fast single-seaters around the world’s greatest racetracks, with full factory support and top-level instruction.

FERRARI CREATED THE F1 CLIENTI PROGRAM in 2003. Here’s how it works: Customers like Moeller purchase a Grand Prix car, often directly from the Scuderia. Supported single-seaters range from 1970 models to as recent as 2010 versions; they must be at least two years old, so as not to divulge any secrets to Ferrari’s rivals. The Clienti technicians, overseen by chief technical coordinator Maurizio Nardon, have either worked with factory F1 teams or are in training to someday move to F1 racing, and they prepare the cars for non-competitive track events around the world. Ferrari takes care of everything; all the client has to do is show up at Silverstone, Spa-Francorchamps or Suzuka and their car, crew, and coach are waiting for them.

Gené is highly valued for the one-on-one guidance he provides to clients. “You have to listen to the car with your body,” explains F1 Clienti’s Adalberto Cattabriga, “but only a Formula 1 pilot is able to move this feeling to a client—and this is the reason Marc is here.” 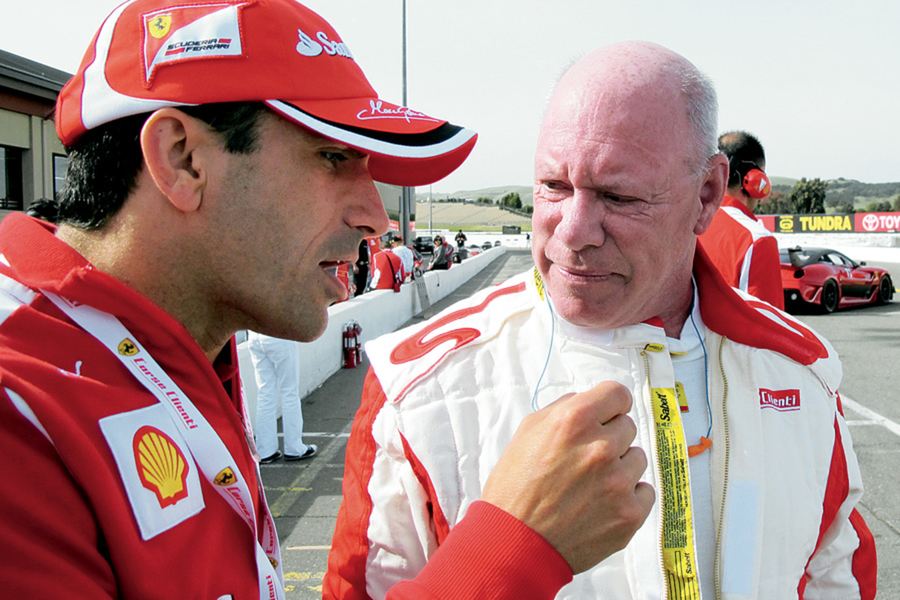 Moeller is full of praise for Gené. “What makes Marc a great coach,” he says, “is that he can translate the elements of car performance by driving it himself and also looking at the telemetry to compare what he does and what I do—then translate it into his observations and changes that I need to make in order to improve my own performance.”

As they say, the proof is in the pudding. During a Ferrari Challenge event in Monterey, California in May, Gené helped Moeller cut three seconds off his best lap time at Laguna Seca, a track on which Moeller has logged more than 6,000 miles in recent years. (The key to Moeller’s improvement, says Gene, is his “capacity to process information and act on it.”) The Spaniard also showed off his own skills behind the wheel. After just four laps in Moeller’s F2003-GA, Gené clocked an unofficial lap record: His 1:05.78 lap around the 2.2-mile circuit bested the previous top time, set by Sébastien Bourdais in a Champ Car in 2007, by a tenth of a second. But, says Cattabriga with a smile, he could have gone faster: “Marc Gené is not able to push 100 percent because it is not his car.”

Moeller, who’s of course free to push the car as hard as he wants, was no slouch, either, hitting a terrifying 187 mph on the front straight before standing on the brakes for Laguna’s Turn 2 hairpin. Not bad for a 57-year-old retired management consultant. 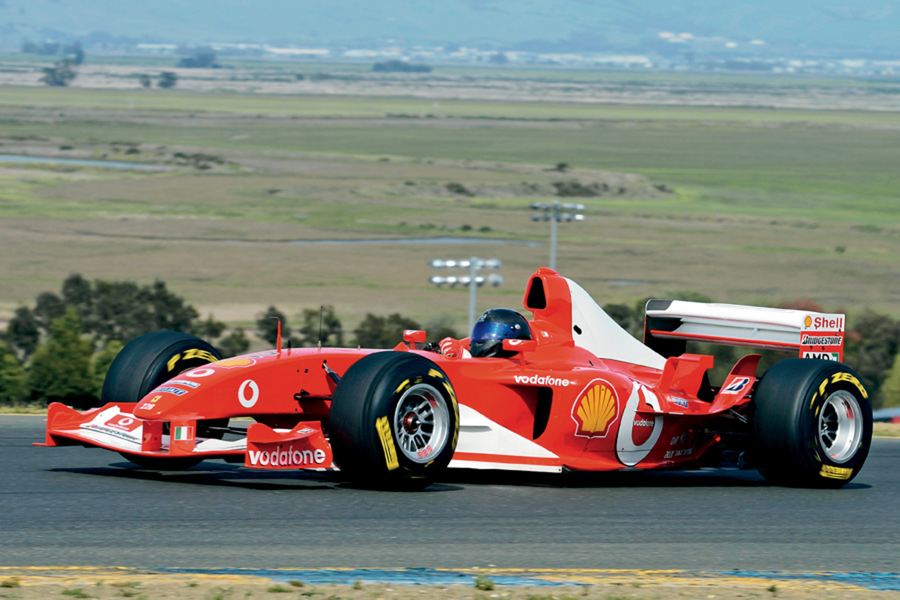 YOU MIGHT NOT BE SURPRISED to know that, at one point in his life, Moeller was on the verge of becoming a professional race-car driver. It all started in 1984, when his wife, Carol, gave him a surprise birthday present: racing school at Bob Bondurant. Next came the Jim Russell Pro Series, and before long Moeller was driving Atlantics, headed for a career in open-wheel racing. But, says the Harvard MBA, “I made the decision to stay with the business side of things.”

In early 2011, Moeller bought the F2003-GA (named in honor of Fiat head Gianni Agnelli, who died at the outset of the 2003 F1 season), which boasts a 930-hp, 3.0-liter V10. In terms of power output, F1 Clienti customers can do no better. For the 2004 season, the FIA introduced regulations that required engines to last longer, thus limiting their peak power. Then, in 2006, the 2.4-liter V8 formula debuted, dropping engine output to well below 800 horsepower. As for those ’80s-era turbo monsters, the technicians only prepare the engines to race trim, so 1,000-plus horsepower qualifying blasts are not an option. Thus, the F2003-GA sits at the top of the heap, a fact self-evident to those who have driven it. 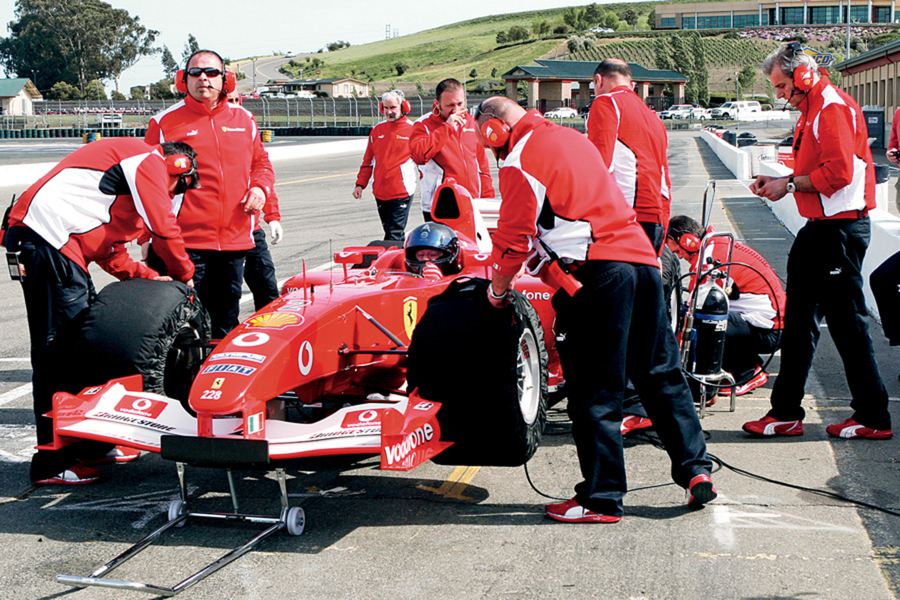 “This GA is an absolute rocket,” says Moeller. “My initial drive in the ’03 was at Mugello. To do that for the first time in this car was pretty hairy. We did 207 mph at the end of the straight—something very eye-opening!”

He’s not the only one to be bowled over by the car’s raw speed. Speaking of his fastest lap around Laguna Seca, Gené says, “I think this record will stand for some time, because there are few other machines out there as amazing as the Ferrari F2003-GA.”

MOELLER’S F1 CLIENTI INVOLVEMENT keeps him on the go. “We get to Europe five or six times a year with the modern F1 cars,” he says. “This year, we’ll add Silverstone as a new track I’ve never driven, and we’ll go back to Paul Ricard and Spa-Francorchamps, Mugello, and then the World Finals, somewhere yet to be announced. Last year it was Mugello, and the year before, Valencia.” Driving the GA might be physically and mentally demanding, but you certainly can’t blame Moeller for lapping up the lap time. 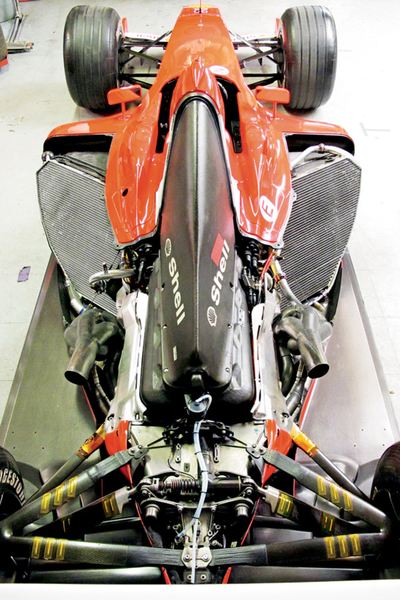 The F2003-GA’s packaging is incredibly tight (note how angled radiators minimize overall width)  in order to make the car as small and aerodynamically efficient as possible.

Indeed, I first interviewed and photographed Moeller at a Ferrari Challenge weekend at Infineon Raceway in Sonoma a couple of weekends before the Laguna Seca event. He and Gené were deep in the telemetry, reviewing how to improve lap times. Is there a rivalry between the two? Well, kind of. Said Moeller, who was just 0.16 second behind Gené’s fastest lap that day, “I’ll be dreaming about that before we get to Laguna and give Marc a run for his money.” And when he talked to fans at Laguna, he said, “I’m an old guy but I’ve still got something, and I’m happy with that. Beating on the door of a track record is exciting.”

Fan curiosity in Moeller’s F1 Ferraris is evident at every venue, and he freely gives devotees his time and consideration in the best ambassadorial way. “Over the last 20 years or more,” he says, “it’s been very difficult for fans to get close to the F1 cars and drivers—in fact, it’s near impossible unless you’re a sponsor or journalist. As a result, we owe our fans for the sport’s success. So, in a way, I’m just giving back a little bit of my enthusiasm and knowledge to everyone else who’s helped make Formula 1 as popular as it is.”

Moeller sometimes goes much further than just talking about the car. At Laguna Seca, he tossed the F2003-GA’s proverbial keys to friend Guy Cosmo, who races a Ferrari 458 GT in the American Le Mans Series with Extreme Speed Motorsports. Cosmo, who 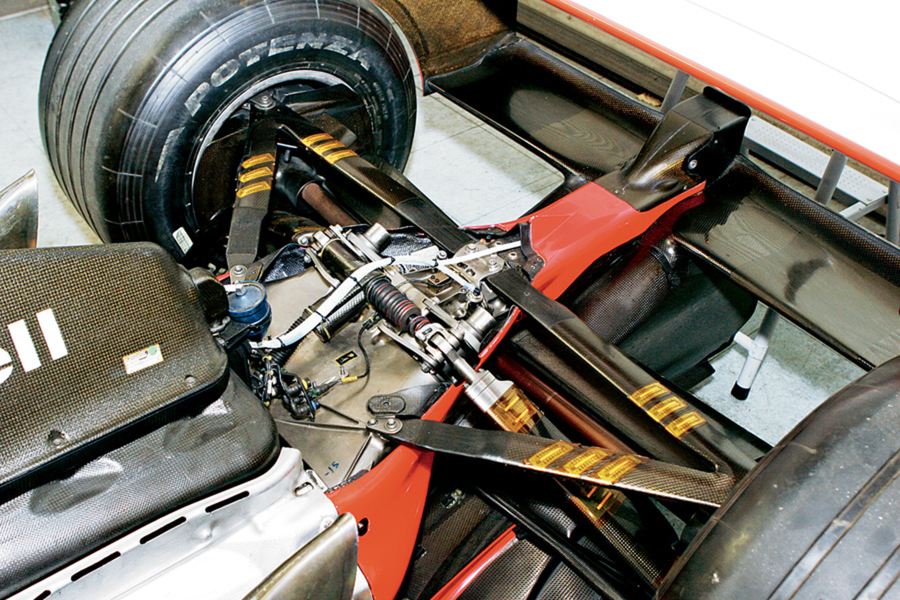 This racing car is constructed mostly of carbon fiber; everything from its monocoque, wings and barge boards to its engine cover, seat, steering wheel and suspension members is made of the lightweight, composite material.

had long dreamed of driving a Ferrari F1 car, soon found himself screaming around the track in the GA. After just a handful of laps, he was less than nine seconds off Gené’s new record and hitting 173 on the front straight. And that’s what F1 Clienti is all about, even to a professional racing driver—living the next best thing to the best thing in the world. 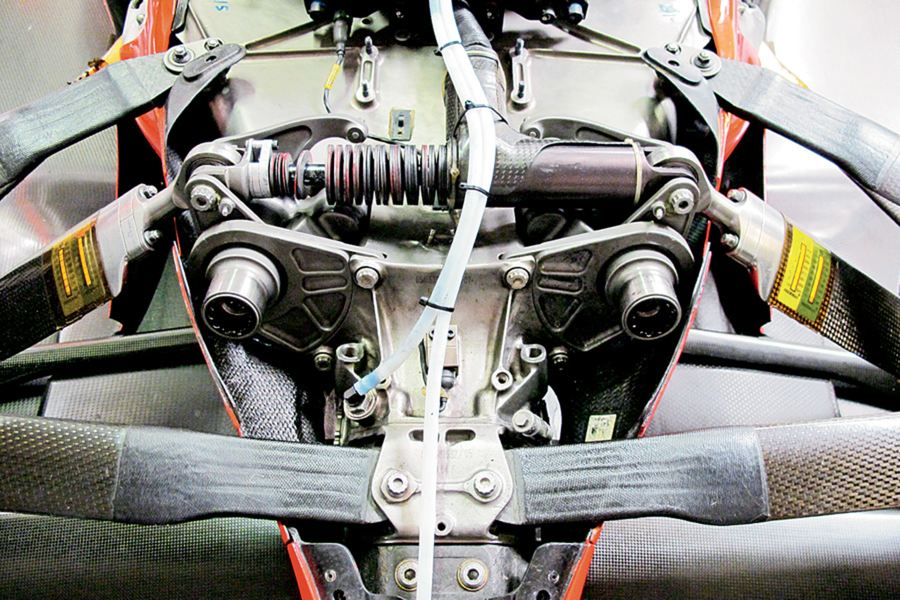 The aluminum engine and titanium gearbox are stressed members of the structure, securing the rear suspension and its lone, push rod-activated shock absorber. 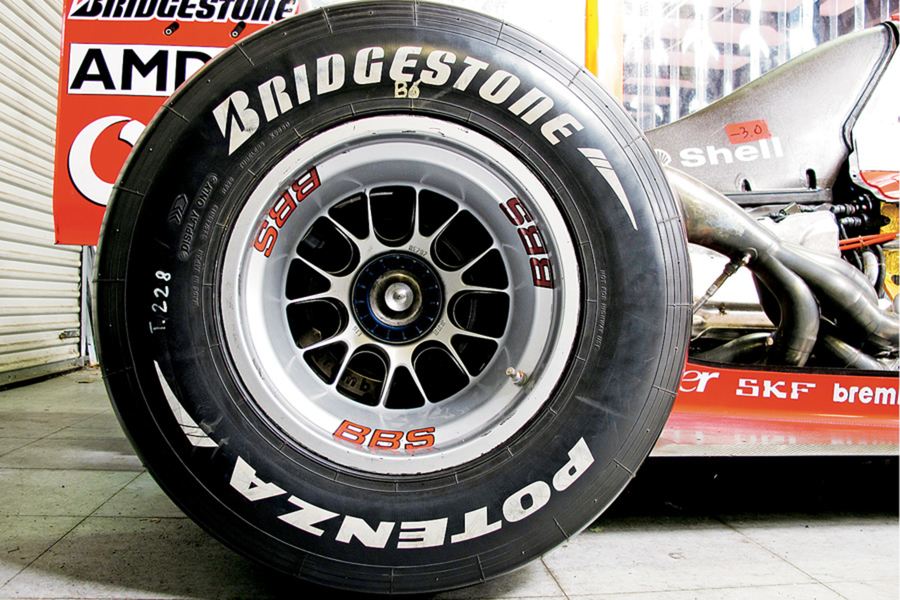 The wheels measure just 13 inches in diameter, which means that the carbon brakes they conceal are astonishingly small for their almost supernatural stopping power. Grooved Bridgestone slick tires were developed specifically for Ferrari. 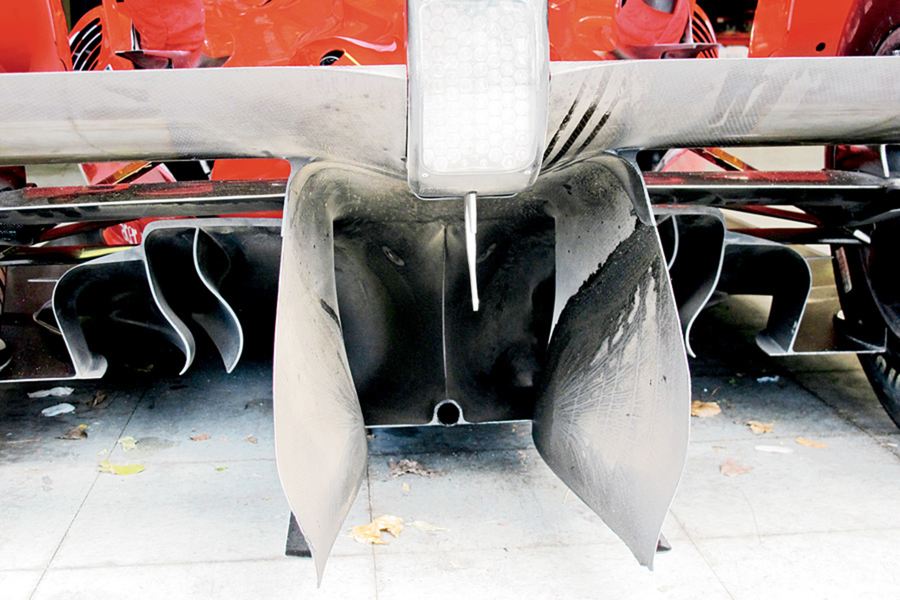 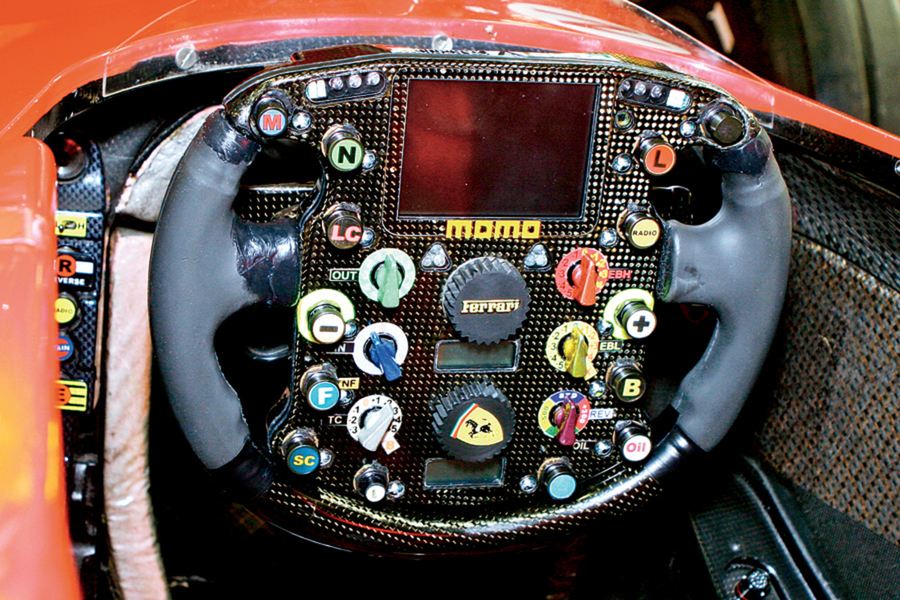 The steering wheel allows the driver to point the front wheels, of course, but that’s just the beginning. Paddles for the seven-speed gearbox and clutch sit on the back; the switches, buttons and dials on the front do everything from triggering the radio and activating the pit-lane speed limiter to setting the traction-control system’s parameters and adjusting the engine mapping. 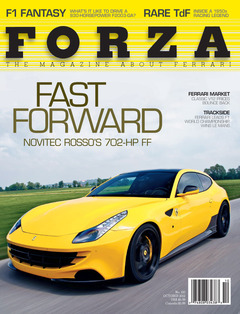