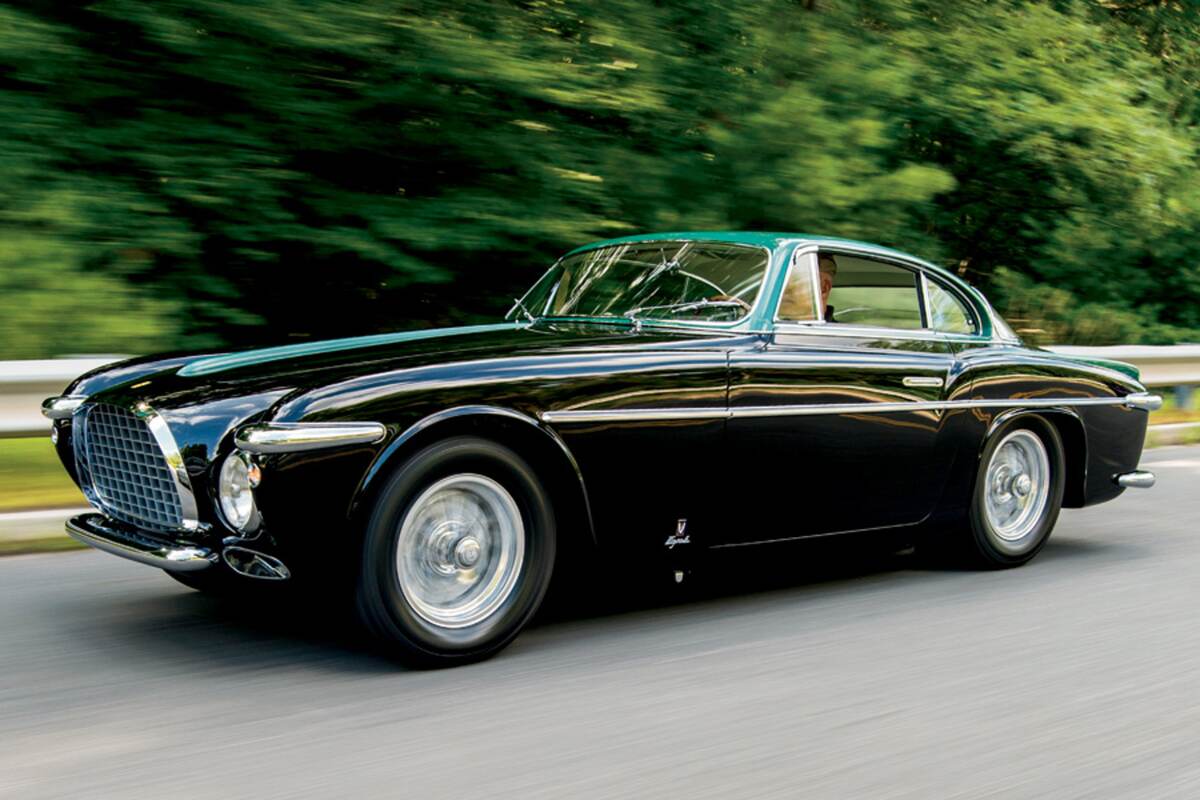 Story and photos by Klaus Schnitzer.

The coachbuilding era was in decline by the 1950s, yet the decade still produced some amazing machines. At the 1953 Salone Dell’ Automobile Di Torino, for example, this Ferrari 212 Inter (s/n 0267EU) demonstrated the best that Carrozzeria Alfredo Vignale had to offer.

The best was much more than the car’s striking two-tone paint scheme, a mix of black (Nero) and metallic green (Verde Imperial). In addition to going above and beyond the norms of the day in terms of fit and finish, the craftsmen in Turin lavished

s/n 0267, the second of what’s thought to be six (plus or minus one) “low-roof” 212s bodied by Vignale, with numerous, often-subtle details both inside and out. 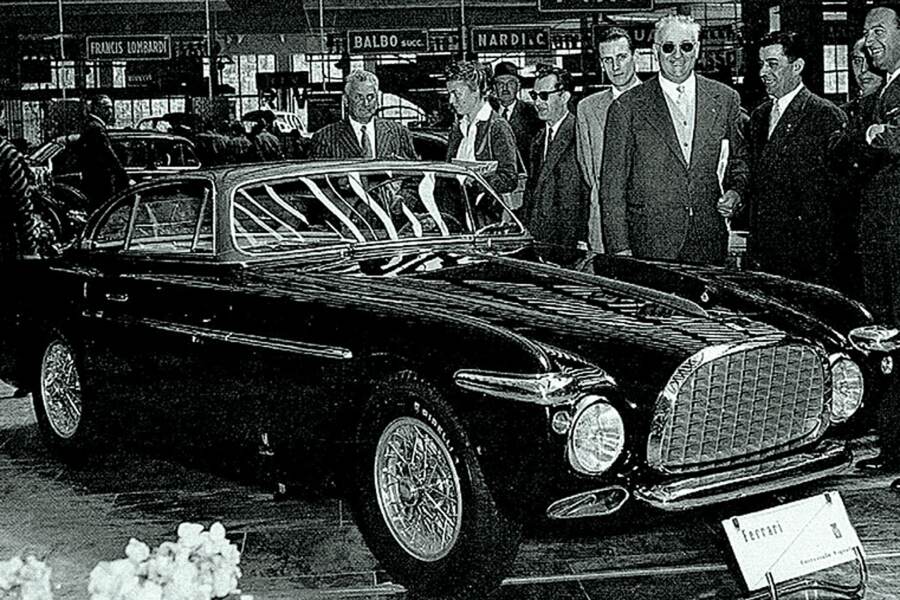 Like many once-regal vintage automobiles, s/n 0267 hasn’t remained pristine over the last six decades. But today, after 61 years of indifferent repairs and neglect, tempered by well-intentioned resprays and attempted partial restorations, this Ferrari has been restored to its former glory.

THE 212 SERIES featured the latest, 2.6-liter version of Gioacchino Colombo’s famous two-valve single-cam V12. (Earlier editions included the 166’s 2.0-liter powerplant and the 195’s 2.3-liter mill.) This engine, which debuted in 1951, could be ordered in single-carburetor 140-hp specification or with triple carbs for 170 horses. The latter configuration, which was fitted to s/n 0267, gave the 212 a very impressive top speed of 140 mph. However, given the car’s rudimentary chassis with a live rear axle, heavy worm-and-roller steering, drum brakes with a single leading shoe and period tires, it required a brave person to push this Ferrari to its limits.

Such demands didn’t keep the 212 from being successful in competition right from the start. The model’s most memorable victory came at the ’51 Carrera Panamericana, where Luigi Chinetti, Sr. and Piero Taruffi finished first followed by Alberto Ascari and Luigi Villoresi in a second 212. This motorsport success may have helped the car become an excellent seller: 80 Inters—along with 24 competition-oriented Export models, which feature a roughly 14-inch-shorter wheelbase—were built before production ended in 1953. 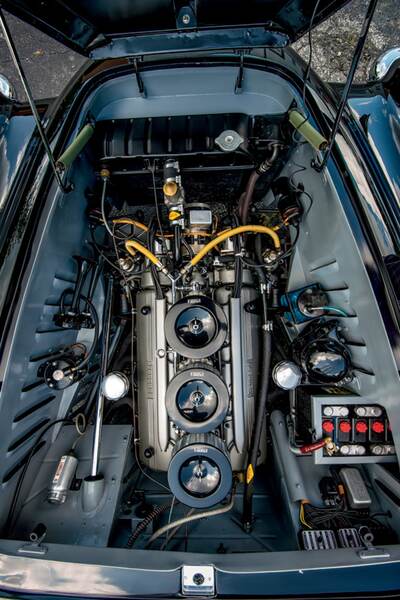 It is probably safe to assume that no two 212s are exactly alike. Typically, a Ferrari customer would pick a chassis, designate a coachbuilder and add numerous personal details. Ferrari would ship a rolling chassis to the chosen carrozzeria, where the workers—artisans armed mostly with relatively simple tools—would weld up a framework of steel tubes and angle iron that would eventually support a hand-hammered aluminum body.

While the mechanical components, especially the engines, of early Ferraris were of exceptional build quality, the same could not usually be said of the structure that supported the body. Poor welding technique is a common feature; this was apparently a job for teenage apprentices. The dissimilar metals used for the bodywork, supporting framework and fasteners often led to electrolytic corrosion. These and other quality issues are the bane of today’s restorers.

It is believed that 36 Inters were clothed by Vignale, with Ghia, Pinin Farina and Touring bodying the rest, aside from a few sent to the Swiss shop Ghia-Aigle. However, since a number of 212s were rebodied and enhanced with 225-spec V12 power in period, uncovering the precise numbers would be a challenge worthy of a different Columbo: Lieutenant Frank of television’s Columbo detective series. 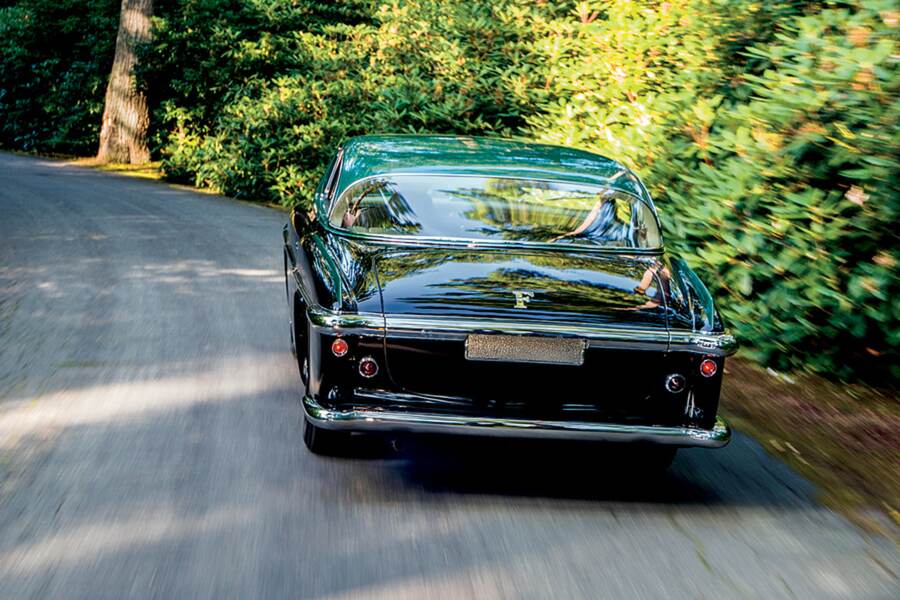 AFTER ITS APPEARANCE at the Turin Auto Show, s/n 0267 was sold to Jean-Louis Lafourcade of Bayonne, France, who showed it at that year’s Enghien Concours d’Elegance. In 1959, the Ferrari was exported to England and found a new owner, one Mr. Simmons, who lived in the ritzy Mayfair section of London. Simmons kept the car until 1969, when he sold it to a Peter H. Gibson in Worcester.

In 1972, the Ferrari was purchased by David Shute of Somerset. Shute had the car restored, during which time the bumpers were removed and the body repainted red. Four years later, Shute assigned the Ferrari to Christie’s to be sold at auction, but the car did not find a buyer until December 1977. That’s when Larry Nicklin, a founding member of the Ferrari Club of America, became its keeper. Nicklin, who passed away in January 2015, kept the Ferrari for the next 34 years. Under his ownership, the 212 was repainted in its original black with a green roof.

In March 2011, at RM Auction’s sale at Amelia Island, s/n 0267 was purchased for $660,000 by the father and son team of Bradley and Buzz Calkins. RM’s catalog reveals a sad-looking Ferrari in need of some major intervention, so it’s appropriate that, the following year, the Calkinses hired Paul Russell and Company in Essex, Massachusetts to restore it. 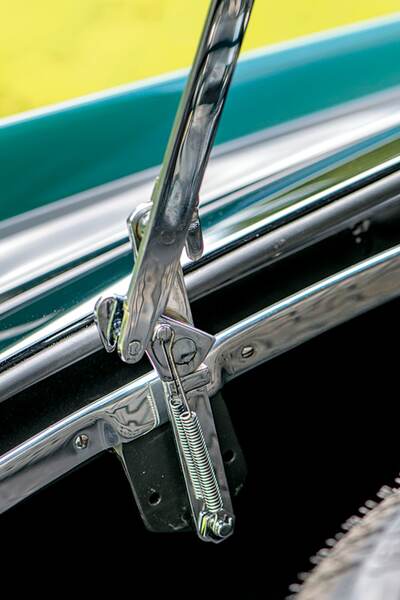 Russell’s crew started by disassembling s/n 0267, taking the time to photograph and document every item. Since the car had never before been totally taken apart, there was plenty of original evidence on hand to facilitate the restoration. In addition, the team was able to inspect two of the other Vignale-bodied low-roof 212 coupes for clues. The news wasn’t all good, however.

“While this car has been called a ‘great barn find,’ it was no longer a complete car,” says Russell. “The black primer covering the body was the first clue. A lot of electrical substitutions had been made and original parts needed to be sourced: electrical and air horns, ignition switch, flasher relay, horn button, tail and license lights. Other fittings like interior air grilles, map nets, dome light and dash knobs were missing, too. Some things had just been hacked up for various reasons, and now needed major repair.”

Replacing the missing bumpers wasn’t a straightforward process, either, reports Russell. “Looking closely at the factory photos of this car as we considered a replacement technique, it was apparent that there was a small chrome ‘welting’ that edged the bumpers, and the body side trim as well. Looking closer still, the shape of this edging was not rounded, but a long oval which then tapers away, as it goes under the side trim and bumpers, at the ends. Furthermore, this welting was not off-the-shelf. It was hand-fabricated to fit this car from sheet brass, folded and tapered, then filled with lead before mounting hardware was attached, and then finally chrome-plated. It’s a remarkable detail that was certainly a challenge to replicate.” 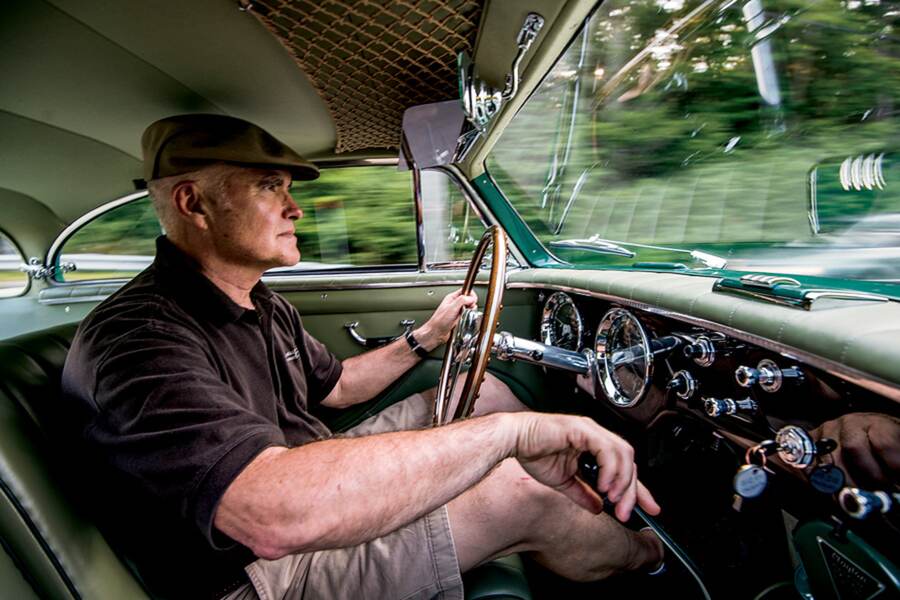 Other metalwork required including rectifying previous substandard repairs and fabricating new rocker panels, driveshaft tunnel, floors and firewall. All of the original exterior body panels could be reused, so after sanding and priming the Ferrari was repainted in its original colors.

The interior also required a complete makeover. The seats were stripped, rebuilt, re- stuffed and covered in new olive green leather with dark green piping. The result is stunning, as are the re-created door-sill moldings with their finely etched pattern. The door cards, headliner, instruments and numerous details also received attention.

“It’s hard to appreciate it all at a glance,” notes Russell. “For example, a nod to the exterior welting details is echoed throughout the interior, on the dash, door caps, seats and ashtray.” 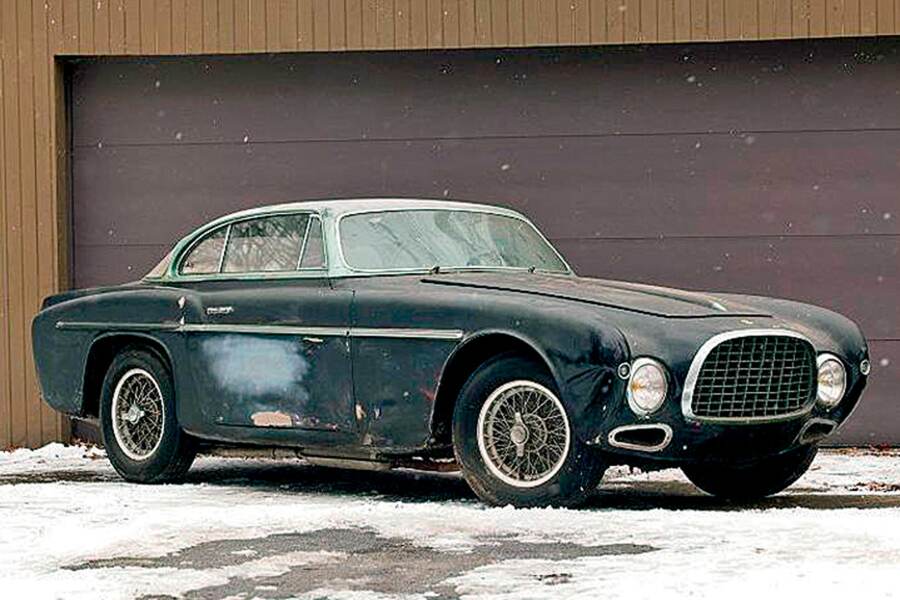 S/n 0267’s mechanicals didn’t escape Russell’s attention. When the V12 was disassembled, corrosion damage was discovered; the bad aluminum was removed and fresh alloy welded in its place. The block and heads were then honed and machined and the rotating assembly was balanced, after which everything was put back together.

The original headers were past their service life so new ones had to be made from scratch, a very complex undertaking. “This cannot be done until late in the job when the engine is back in the chassis, for intermittent trial fits, since the clearances between the exhaust tubing and the chassis can be tight in areas,” says Russell. “A fixture is made on the bench to mimic the exhaust ports of the cylinder head. Flanges are cut out—by water jet, these days—and bolted to the fixture.

“The individual pipes are sand bent, as they were ‘back in the day,’ since the smooth, soft bends of the manifolds are crucial to good gas flow and originality. This involves welding a cap on one end of the pipe, filling it with very dry sand and pounding a hardwood plug into the other end. The bends are then made by heating the pipes to cherry red and bending to the appropriate contours by eye, rechecking the shape and fit regularly for each branch of the manifold. Careful cutting and welding finish the job.” 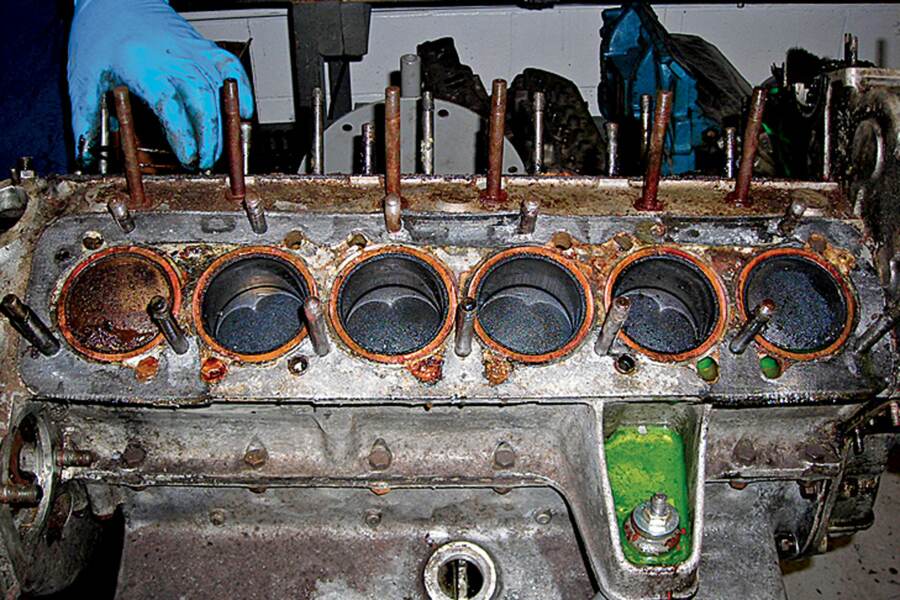 The original radiator core and fuel tank were cleaned, repaired, painted and reused. Out back, the differential and transmission received a full overhaul. And with that, s/n 0267 was ready for road testing.

WHEN I PHOTOGRAPHED THIS FERRARI, I was dumbstruck by all of Vignale’s details. There are so many things to love about this automobile: the roof netting that can hold maps and sunglasses, the folding window-winders that do not poke occupants’ knees, those delightful door-sill covers (which wouldn’t look out of place in a jewelry store), the perfect chrome trunk-lid supports….

The interior’s new leather is a treat for nose and hands, while the exterior paint is deep and lustrous, and, to me, perfect. Russell assures me the two-tone paint is as good as the original, but not better. Subjectively, I think the front end of the car is nicer than the rear. The former is purposeful and striking, the latter is somewhat awkward-looking with its slightly overwrought double-bumper design. 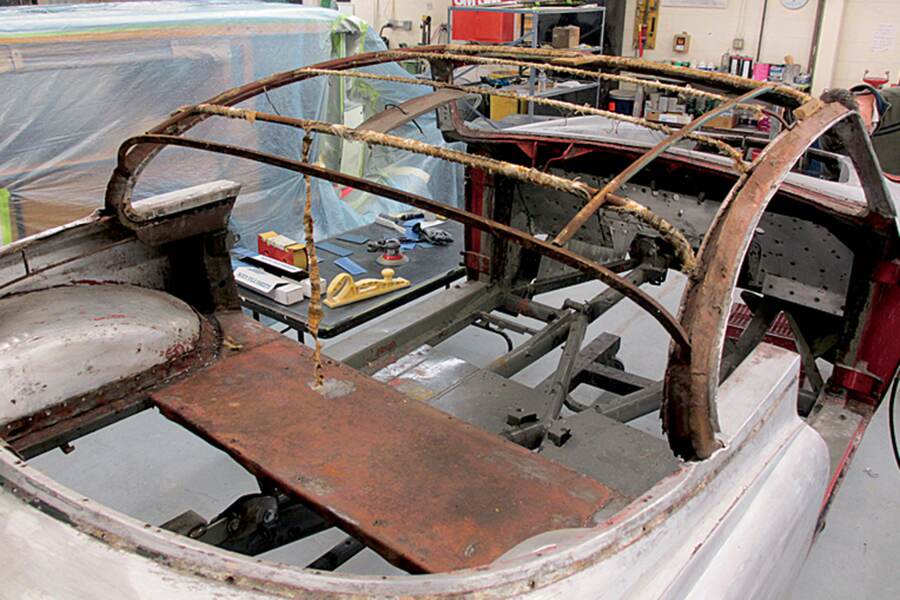 With Russell behind the wheel, I climbed into the passenger seat; entry into the lovely interior was quite easy. The V12 engine is always a feast for the eyes, but hearing it is better. Unfortunately, at speed other noises, particularly gearbox whine, almost cancel out the engine’s sweet sound track.

Unlike modern cars, s/n 0267 is demanding and totally involving to drive. There’s no need for additional entertainment items, such as a radio (not that you could hear one), and Russell got quite the upper-arm workout thanks to the unassisted steering. Shifting the five-speed transmission has to be performed with care and finesse due to the lack of synchronizers in the lower gears, and the car’s ride could be politely described as firm and somewhat bouncy.

A 100-mile journey would be both an adventure and physically tiring. “It’s certainly primitive by 1960’s and later standards, but still enjoyable to drive,” says Russell. “The V12 makes a lovely raspy exhaust note. It would not be all that impressive by the stopwatch, but the car feels like it goes quite briskly when you get on it.” 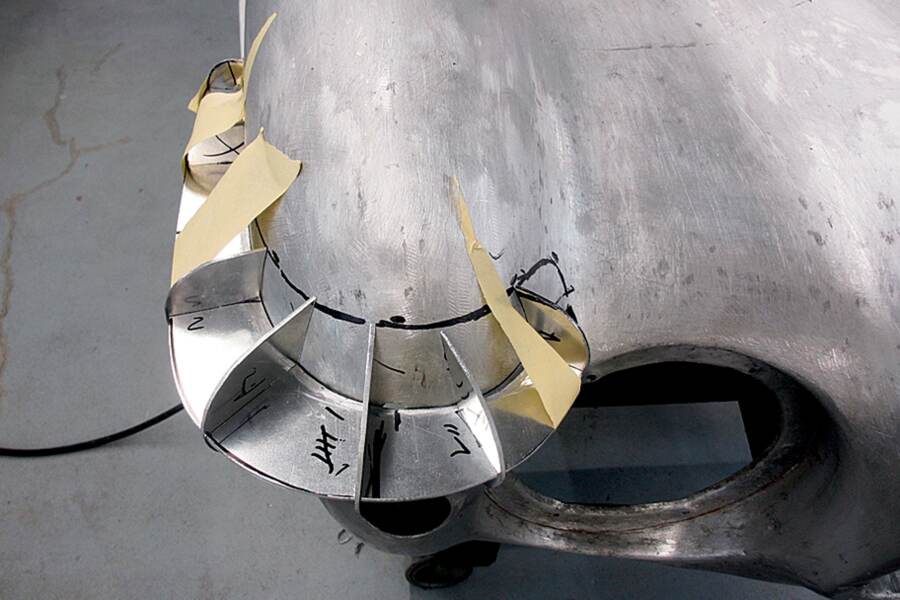 Our trip turned into a voyage of discovery when we suddenly ran out of gas. “The instrumentation on these early ’50s Ferraris is quite delicate, even prewar-like,” Russell tells me later. “The sending unit was not giving us an accurate reading of the fuel level. The tank was empty, but still showed a quarter full, which we’ve since rectified. That’s why we drive ’em!”

When help arrived, we learned that the tank holds 28 gallons of fuel. Afterward, with an extra 170 pounds in back, we found the ride had improved considerably; Russell later added another leaf to the rear springs and adjusted the lever shocks to further improve ride quality. There was no cure for the car’s lack of rearview mirrors, but that probably wasn’t so much an issue in the much lighter traffic of the 1950s, particularly if you were driving one of the fastest cars on the planet.

Soon after its restoration was completed, s/n 0267 made its public debut at the 2014 Pebble Beach Concours d’Elegance. Earlier this year the Ferrari was shown at the Cavallino Classic, where it won a Platinum Award in its class, and in May 2015 it is scheduled to attend the invitation-only concours at Villa d’Este in northern Italy. 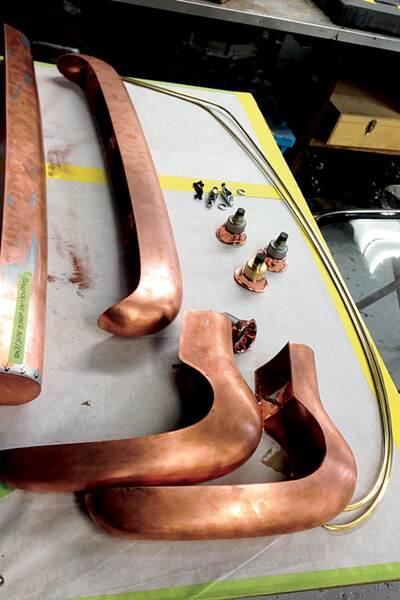 I think this Ferrari is a perfect choice for Villa d’Este, given both the quality of its restoration and the fantastic detailing Vignale’s designers and craftsmen poured into it all those years ago. “The coachbuilders really put in a great deal of effort into the design of this car,” Russell agrees. “I love this car, as it represents the best of the coachbuilder’s art: beauty in the details and a great car to drive.” 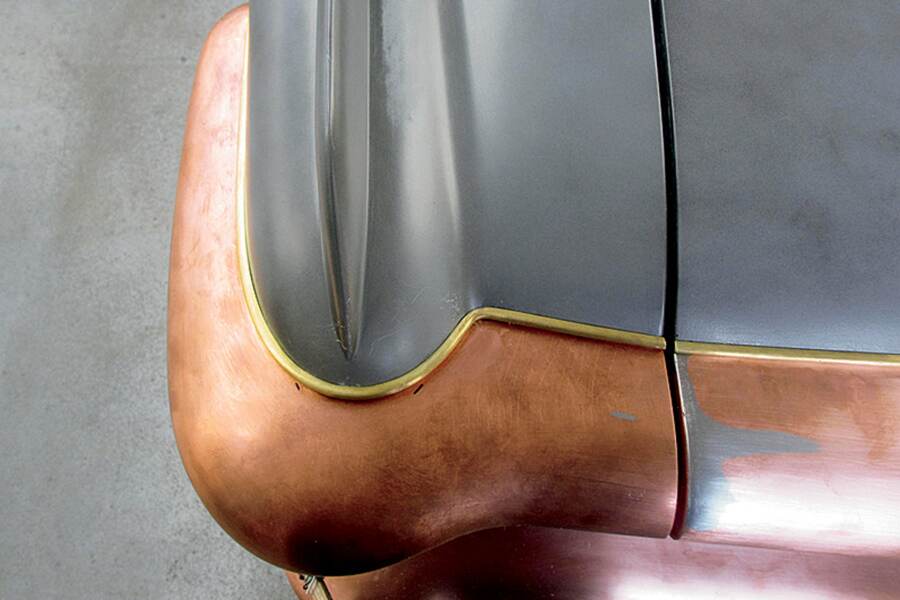 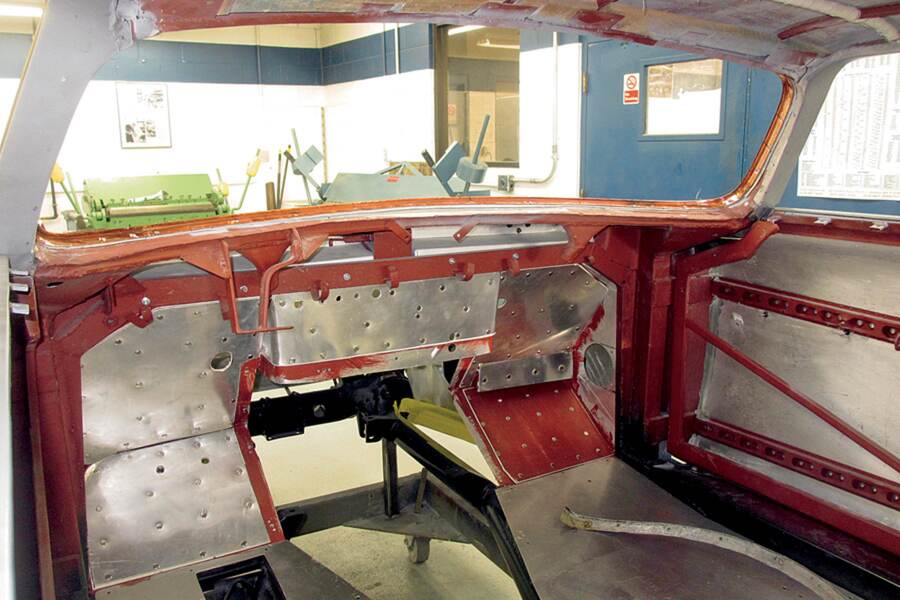 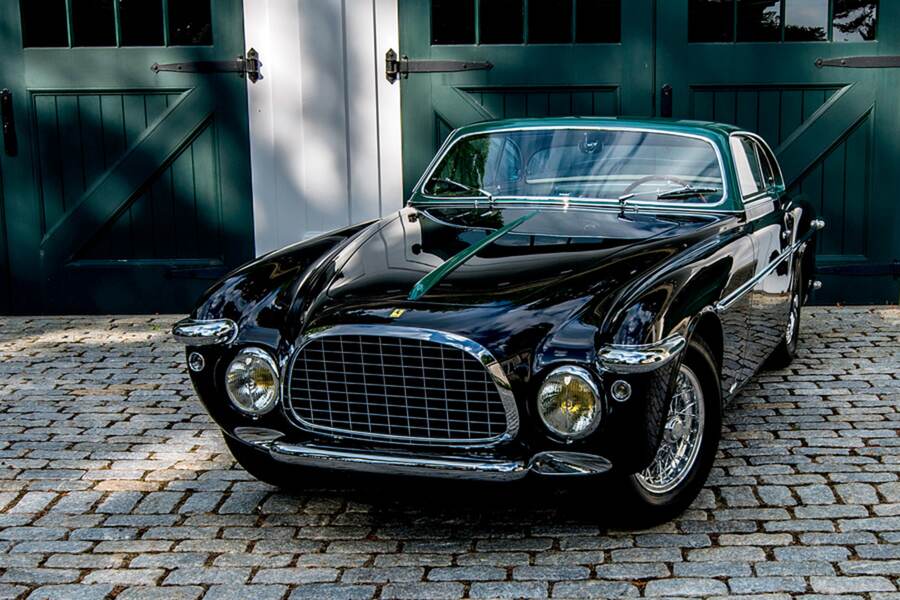 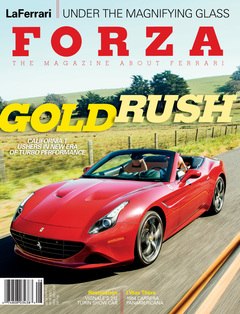