Ferrari is more than just a marque to 308 GT4 owner Robert Garven. 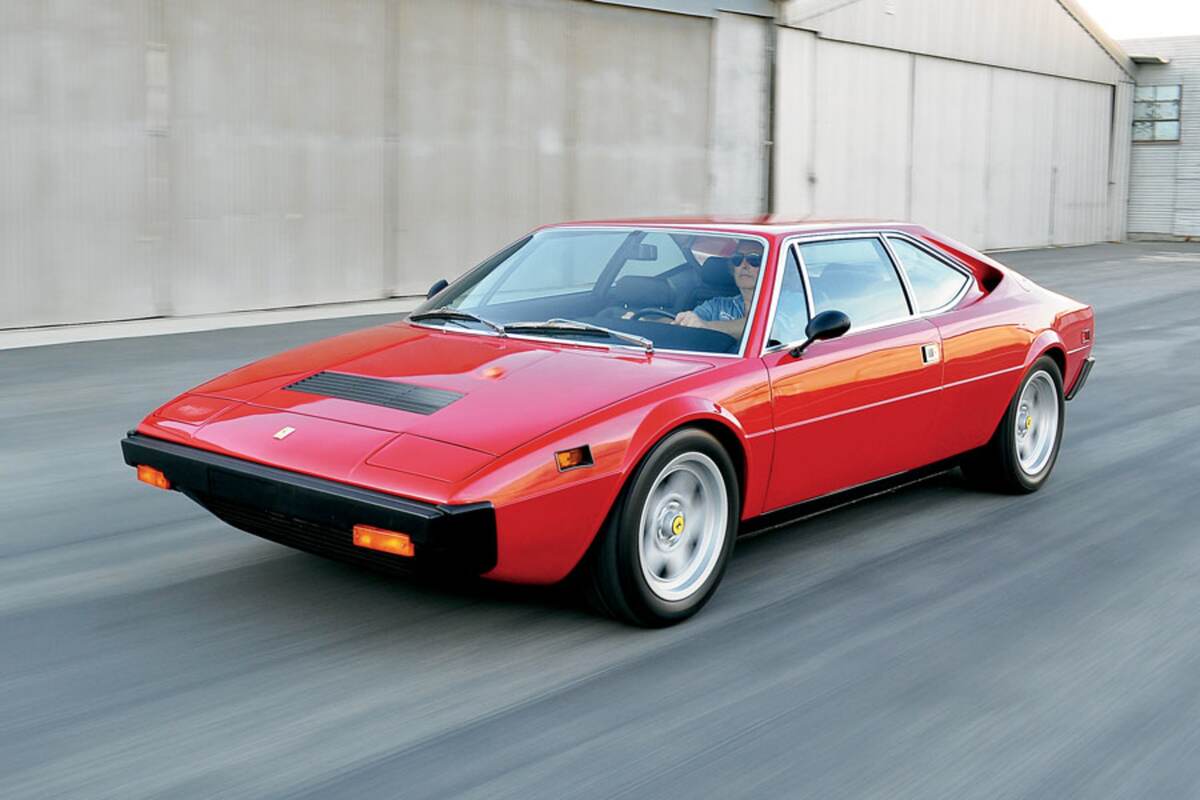 Story and photos by Peter Wu

Robert Garven was ten years old in 1967 when he saw his first Ferrari, in San Francisco. He stood there, speechless, as the California sun reflected off the coupe’s taut curves and polished chrome, mesmerized by the most beautiful thing he’d ever seen.

“This truly was a spiritual moment for me,” Garven recalls, “and I clearly remember, while looking at the Prancing Horse emblem, that I vowed I would try to own one of these fantastic vehicles. I connected with the marque as if converting to a religion.”

Garven didn’t know it at the time, but he was born on the same day that Enzo Ferrari’s first son, Alfredo (a.k.a. Dino), died. Coincidence? It’s impossible to say, but Garven had been changed by the sight of that car. His supportive parents took him and his sister, Heather, who shared his interest, to races near their home in Southern California, at Riverside International and Willow Springs. 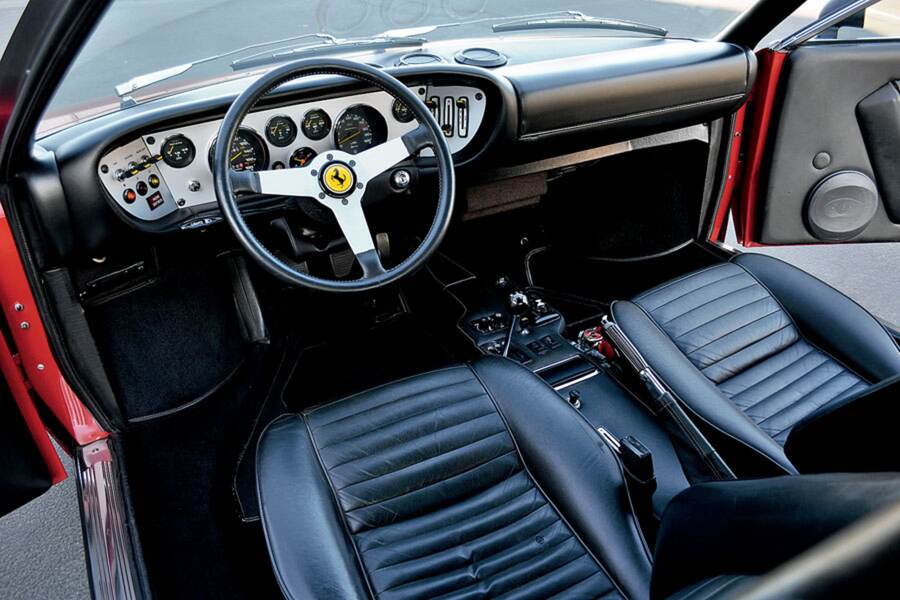 “I remember seeing the Ferrari 612 with Chris Amon racing in the Can-Am series,” says Garven. “The Ferrari was not successful that day but the sound of the engine had a hypnotic effect on me, which has lasted to this day.”

He also attended many LA Auto Shows, where he saw, among other beauties, the Dino 206 Competizione and the 512 S Berlinetta Speciale concept cars.

At age 14, Garven, gushing with the enthusiasm of youth, wrote a heartfelt fan letter to Enzo Ferrari. He never expected a response, but, six months later, he opened the mailbox to find a letter from Italy, Maranello. 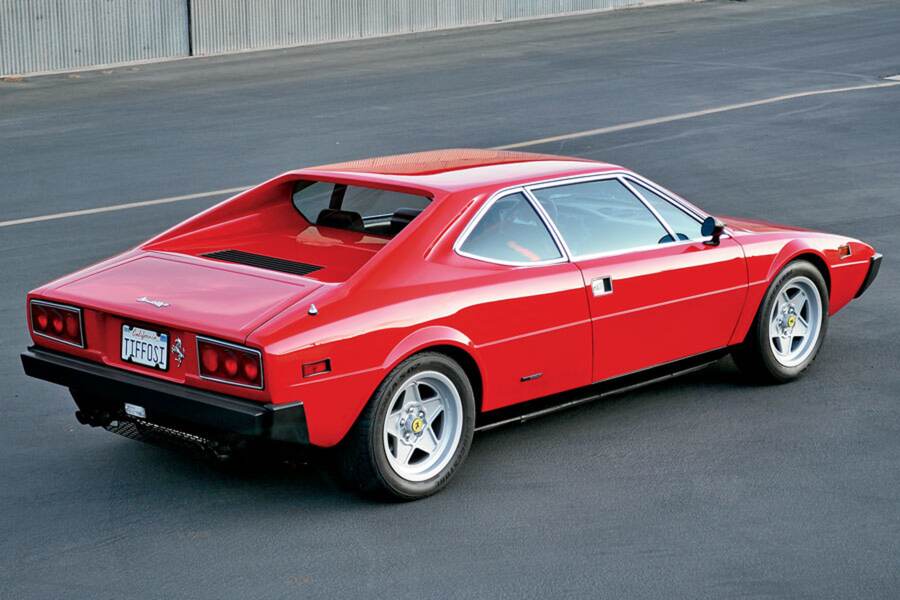 “Inside was an autographed photo of Enzo Ferrari in his signature purple ink!” says Garven. “I was dumbfounded but extremely happy. I immediately framed it myself and started a small shrine with a Ferrari model which I put on a wooden base.”

The letter and model were just the beginning of his Ferrari memorabilia collection, one that has since grown large enough to cover the walls of his garage and two showcase bookshelves in his living room. Those shelves are stocked with several hundred books and more than 100 1/43-scale model cars, many of which Garven assembled. (On some, he applied three or more coats of hand-rubbed paint and painstakingly re-upholstered the seats in leather or suede.) Eight Momo steering wheels, from various road and race cars, line the walls, including one from an F1 car given directly to the previous owner by Enzo himself.

But the most important part of the collection is his correspondence with Ferrari. “Over the years I sent Enzo small gifts for his birthday and/or Christmas, and several times he sent back a thank-you card,” says Garven. “A few months before his passing, I received another personalized card and enclosed was an autographed photo. This is my most prized possession on earth.” 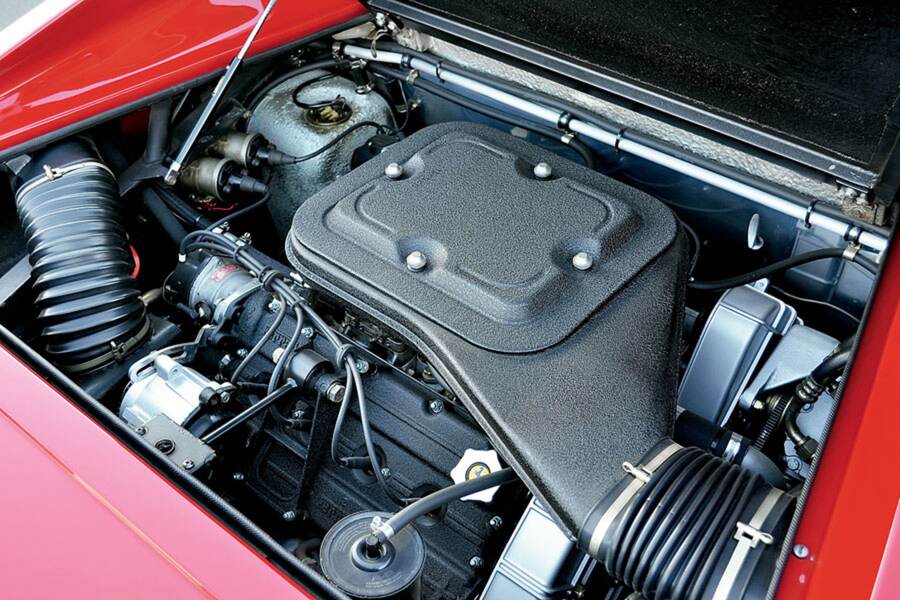 Walk into Garven’s Ventura, California home, through the hallway lined with poster-sized framed photos and into the living room, and it’s hard not to spot the photos of Enzo wearing his trademark dark glasses. In fact, when he first started dating his wife, Rose, she thought Ferrari was his father.

While Garven’s collection of Ferrari artifacts grew steadily over the years, one thing was missing: a car. He had hoped that a career as a heavy-metal drummer would pay off—he and two friends started Cirith Ungol (named after a tower in J.R.R. Tolkien’s The Lord of the Rings) in 1971, and over the next 20 years they released five albums, toured often and were included in seven compilation albums—but it never did.

“We gained quite a bit of notoriety,” says Garven, noting that Cirith Ungol still has a following in Europe and has been asked, post-breakup, to play in various music festivals. “However, due to bad timing, financial success eluded us.” 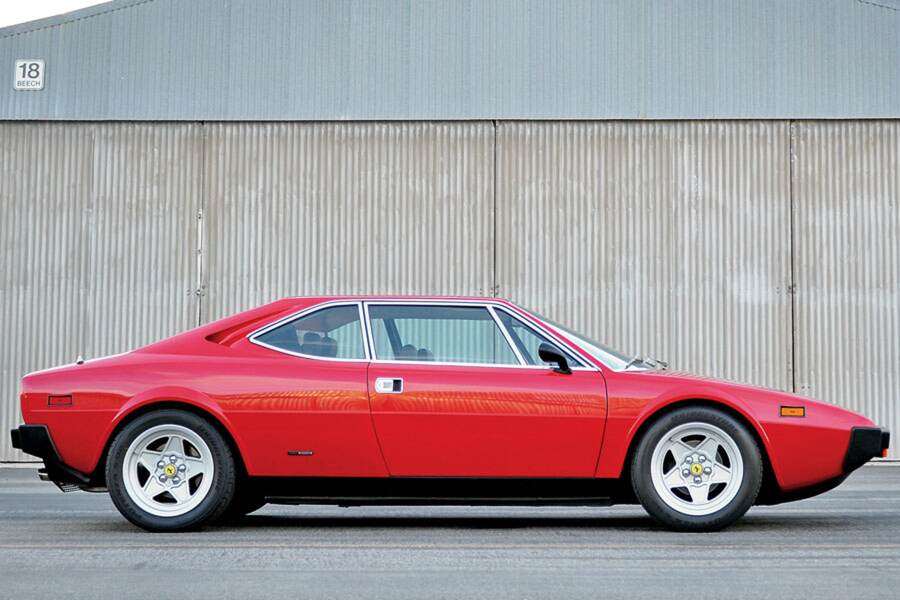 In the early 1990s, a new career in the graphics industry finally offered him the means to make that final dream come true. His Ferrari of choice? The 308 GT4.

GARVEN FREELY ADMITS he loves and lusts after every Ferrari ever made, but the GT4 was the only car he seriously considered. He likes the fact that it’s Ferrari’s first road-going V8, as well as the only production Prancing Horse designed by Bertone. Nor does it hurt that Niki Lauda helped tune the suspension or that it was the only 2+2 Ferrari ever raced with factory support, or even that he thinks Marcello Gandini’s wedgy, angular lines still look fresh.

But what really sealed the deal for Garven was a brief encounter, in 1984, with a ’75 GT4. During a trip to Monterey to see the historic races, he spotted the car at an independent dealer across the street from where he was getting gas. The salesman invited him to sit in the car, and from that point on, says Garven, “I decided to do whatever I could to get one. I have always dreamed of many other Ferraris, but the GT4 was the one for me.” 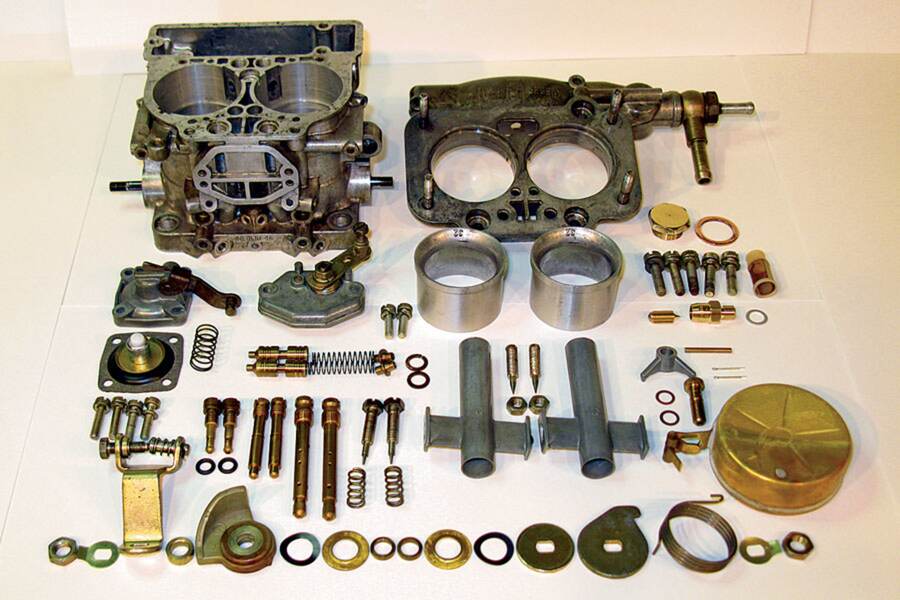 In 1994, three years after Cirith Ungol disbanded and 27 years after that fateful day in San Francisco, Garven spotted a 1975 308 GT4 with 26,000 miles in the LA Times’ classifieds. After seeing the car in person, he told the seller he wanted it. Shortly after that, with the bank papers signed, Garven found himself sitting in the snug leather seat of s/n 10766, the keys in his hands.

The drive home was an emotional one, and when he pulled into his driveway, he was met by his parents, his wife, neighbors and friends, one of them videotaping his arrival.

“I think everyone thought that when I said I was going to buy a Ferrari, I was going to drive home in a barn find,” he recalls. “In reality, this GT4 is one of the finest examples around.” 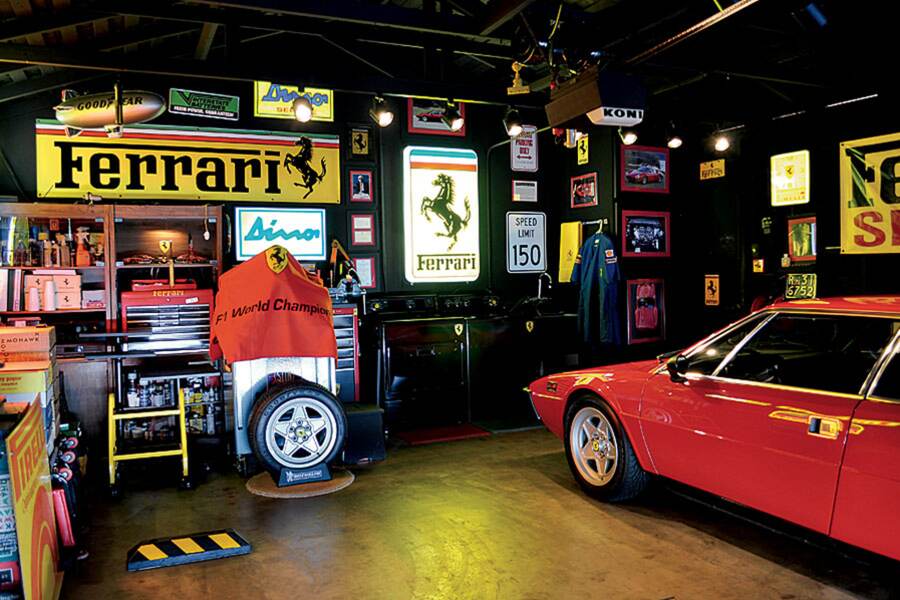 Given its 55,000 miles, the car is in excellent condition—a testament to the care that has been lavished on it over the past two decades. At first he took the car to a friend and local Ferrari mechanic, “but I was being too picky and wearing on his patience,” Garven recalls. “He suggested I work on the car myself. This was another pivotal moment in my Ferrari ownership because he told me it was easy and I could do it.”

Garven’s only experience at that point was wrenching on a Ford Pinto, but, encouraged, he started doing simple things, such as oil changes, on the Ferrari. His confidence grew after each repair, and over time he has ventured deeper and deeper into the car. Garven says his biggest challenge to date has been replacing the timing gear drive bearings with the engine still in the car: “It can be done, but you have to remove the oil pick-up in the sump, which it is very challenging due to space.”

Another challenge was replacing the cooling and brake-vacuum hoses that run from the front to the rear of the car. “The left fuel tank had to be removed, which prompted me to remove both,” says Garven. “The clutch and water pump were also fun, as so many parts have to be removed for access. These are all difficult procedures but provide great satisfaction when completed.” 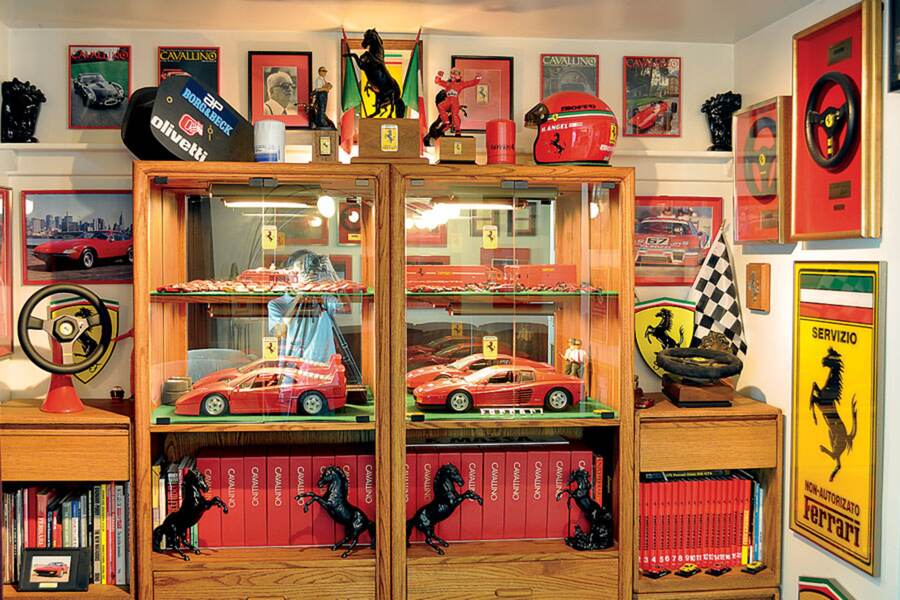 To date, he’s changed the timing belts five times, adjusted the valves, rebuilt the distributor and the carburetors, changed the water pump, clutch, steering rack and suspension components. While he laments that he sometimes spends an entire day trying to remove a few hard-to-reach nuts, he’s quick to say that his experience wouldn’t have been possible if not for the internet, and forums like FerrariChat and the Ferrarilist, the original online Ferrari group, which allowed him to tap into the knowledge and experience of master techs and owners who have done the same repairs: “They selflessly gave their time, knowledge and advice to a novice, not knowing that they were making a fellow enthusiasts’ life, thousands of miles away, infinitely more fulfilling.”

Since that first oil change 28,000 miles ago, Garven’s been the only person to work on the car, which, he says, “runs like a clock” and averages 1,400 miles a year. Along the way, he’s taken thousands of photos while working on the car and offers them to others who are about to tackle the same repairs. To date, he has made more than 4,000 posts on FerrariChat.

For Garven, owning a Ferrari has been “a blessed experience,” one that would not have been possible without “my beautiful wife, Rose, who has supported my passion and allowed me to pursue it for over 20 years.” While some have called his Ferrari enthusiasm obsessive, he says only, “This is my passion, one I am very proud of.”