The Best of Both Worlds

Combining the F430 Spider and 430 Scuderia makes sense on paper, but does the Scuderia Spider 16M deliver the goods on the street? 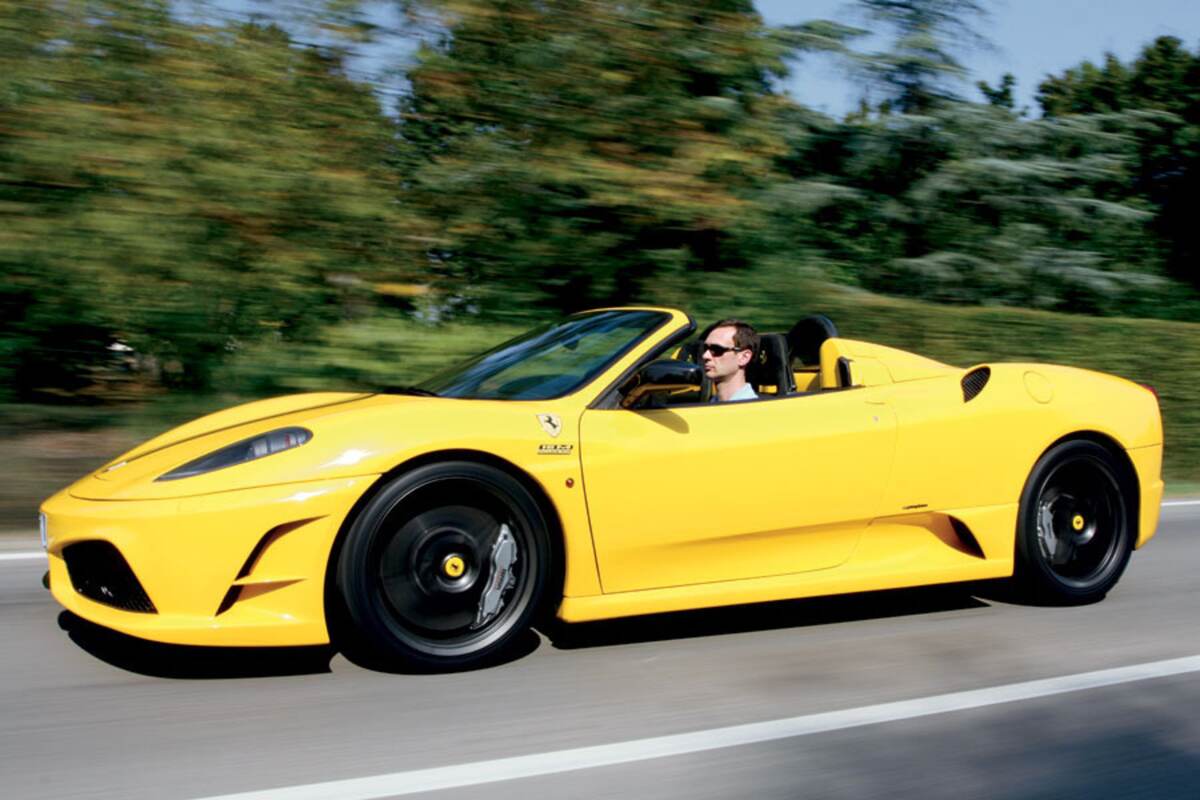 About a year and a half ago, I was able to drive the entire Ferrari line-up, back to back, over the course of four days [“Hard-knock Life,” FORZA #87]. At the end of that adventure, I concluded that the most sensational car of the bunch was the 430 Scuderia, but if I were given the choice of taking one home with me, I’d go for the F430 Spider.

To me, the Spider was simply unbeatable in the real world, the definitive lithe and useable drop-top sports car. The Scuderia, on the other hand, was a mad man, fantastically exhilarating in both sight and sound, with an almost supernatural ability to conquer demanding roads at speed.

In some ways, it was hard to believe that two such different cars could be so closely related. But given this connection, I had to wonder: Would Ferrari ever decide to combine the two machines? And if so, would the resulting car be able to live up to my admittedly towering expectations? 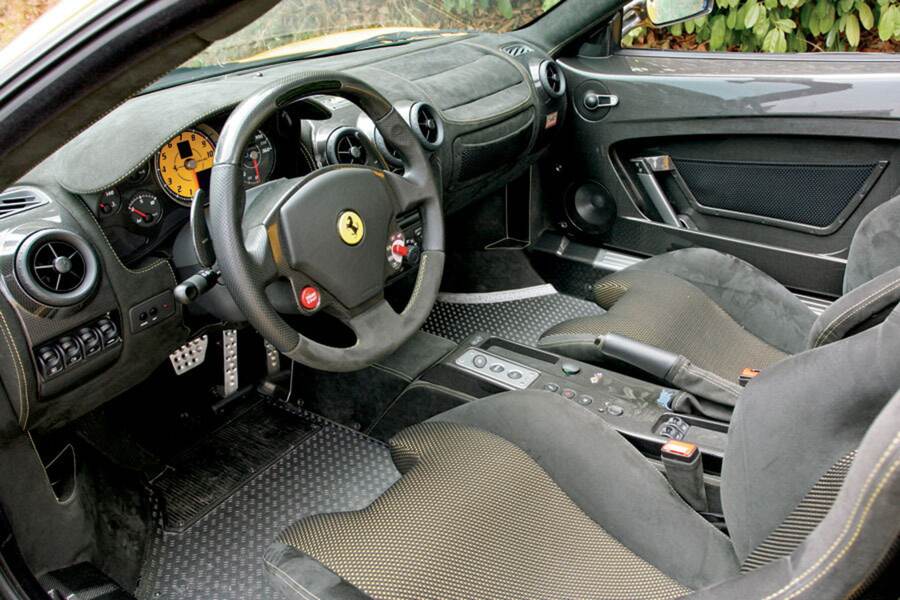 THE ANSWER TO MY FIRST QUESTION came at the Ferrari World Finals in November 2008, when the company announced the Scuderia Spider 16M. The name refers to the sixteen Formula 1 Constructor’s World (“Mondiali” in Italian) Championships the company has won, and, in a savvy marketing move, Ferrari decided to build just 499 examples. The entire run was sold before the first examples hit the production line, proof that exclusive models are still a hit even in times of deep economic recession.

As for my expectations, this past September I was able to drive the bright yellow 16M pictured here. The color scheme, with its contrasting blacked-out wheels and black stripe, could be overkill, but it’s not: It’s a flamboyant finger in the face of styling archetypes, one that sets the proper atmosphere every time you look at the car.

Mechanically speaking, there’s nothing really new here compared to the 430 Scuderia. The 4,308cc V8 delivers the same 510 bhp and 347 lb-ft of torque, the massive carbon-ceramic disc brakes and lightweight suspension bits are untouched, the F1-SuperFast2 gearbox is carried over. The sophisticated driver’s aids and electronic differential are likewise unchanged. 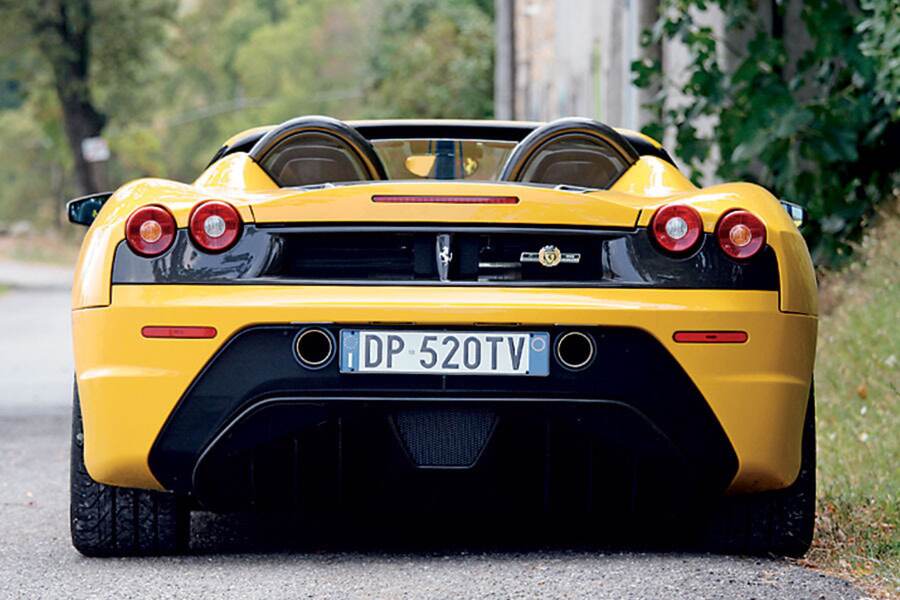 There are a few differences beyond the moving roof, of course. While the body panels remain the same, the 16M’s wheels are a new five-spoke design (which appears in a 20-inch diameter on the 458 Italia). The carbon-fiber diffuser, an option on the Scuderia, is standard, and there are a handful of 16M badges sprinkled on the front fenders and rear grille.

More significantly, the car is around 200 pounds heavier than the 430 Scuderia, thanks in part to the extra bracing of the Spider chassis. There’s a slight penalty in acceleration to be paid for this extra heft—the 16M takes 3.7 seconds to hit 60 mph from a standstill, one tenth longer than the Scuderia—but it’s not enough to be noticeable from the driver’s seat. Besides, the 16M is 176 pounds lighter and four-tenths quicker to 60 mph than the already-fast-enough F430 Spider, as well as two seconds faster around Ferrari’s Fiorano test track.

SLIPPING INTO THE 16M’S COCKPIT, I’m instantly pulled into attack mode by the view ahead. The yellow tachometer contrasts energetically with the rather dark tone of its surroundings. The dashboard is wrapped in a sporty “technical fabric” (which looks and feels a lot like the Alcantara on the seat bolsters), while the shift paddles, dash accents and parts of the steering wheel are made of carbon fiber. The latter material may be the norm in supercars these days, but it still looks the part; indeed, the door panels are one big splash of the composite material. 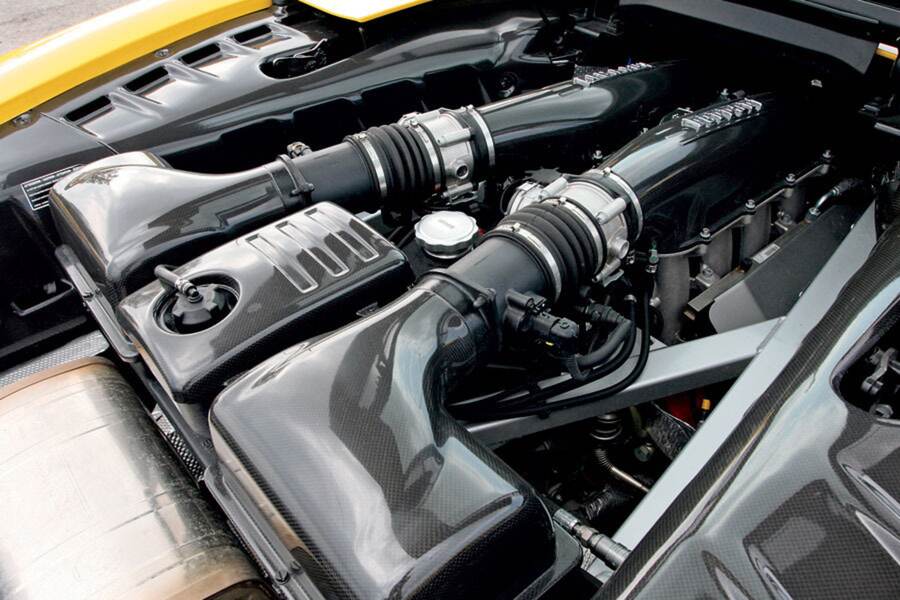 The 16M’s interior is slightly less austere than the 430 Scuderia’s, with the lower parts of the cabin being trimmed in Alcantara and carbon fiber rather than left in bare aluminum. (The exposed metal floor remains, however.) There’s also a commemorative silver plaque in the dash, along with a Ferrari-logoed iPod Touch that’s connected to a new-generation sound system. Carbon fiber shows up yet again on the roll hoops behind the driver and passenger seats.

After savoring the view for a few moments, I can’t wait any longer and press the Start button on the steering wheel. The beast awakens with Ferrari’s signature throttle blip before settling to a menacing, rumbling tick-over—which, thanks to the V8’s flat-plane crank, encompasses a variety of harmonics, never remaining constant in tone. The sound immediately sets my primordial alarm bells ringing, and I haven’t yet put the car in gear.

A simple pull of the right-hand shift paddle does just that, and I’m off through the factory gates onto the streets of Maranello. Puttering along in traffic, the 16M feels pretty much like an F430 Spider: a stiff but composed ride and a quietly moaning engine. From my time in the Scuderia, however, I know that’s not going to last, and I’m proven right when I floor the throttle to get onto the motorway. 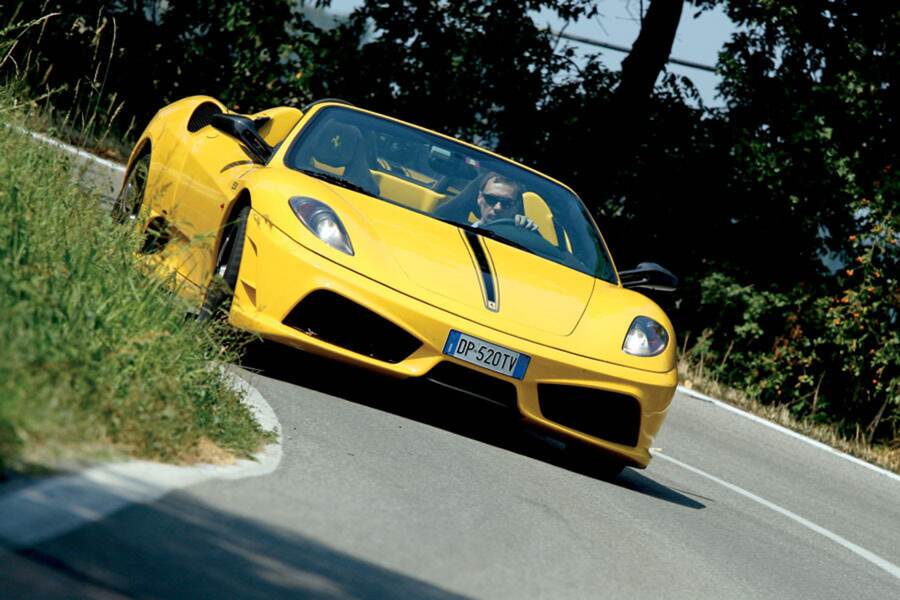 While the Scuderia/16M V8 delivers only 20 more horsepower than the standard F430 engine, it is a world apart in terms of eagerness to rev. The V8 surges harder and harder as the tachometer needle whips toward redline, pushing me back in my seat. Full-throttle upshifts slam home with a jerk, and the surge begins all over again, accompanied by the loudest exhaust howl this side of a Formula 1 car.

Pulling off the motorway, I soon hit the first gradients of the Apennines mountain chain. Sailing along the twisting roads, I’m reminded just how effortlessly progress is made in any version of the F430. It starts with the quick and light steering, which makes corner entry as simple as slicing through butter with a hot knife, and sends back precise information as to the amount of grip available and the surface of the road beneath.

The 16M’s engine is equally responsive to my inputs. In low gears with the revs above 3,000, any brush of the throttle results in an instantaneous surge of power, launching the car out of corners like a stone from a slingshot. Admittedly, this can get tricky in the switchbacks: The car rockets out of the bends so fast that the next corner always arrives faster than anticipated, forcing me to try to read the road ahead more rapidly with my mind than with my right foot! 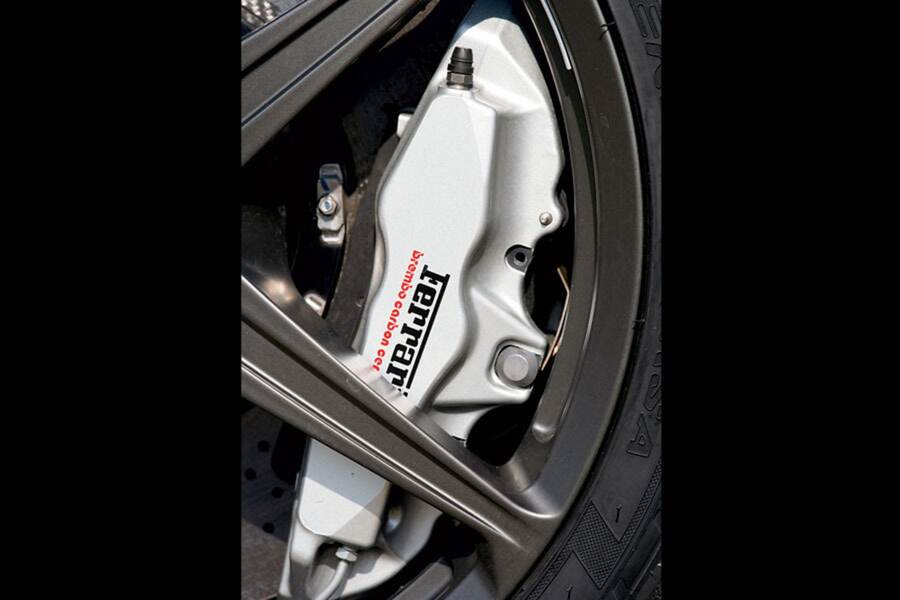 The bellowing soundtrack only adds to the experience. The automated engine blip on downshifts is pure bliss, and it’s occasionally accompanied by a downright orgasmic backfire—there should be a warning in the owner’s manual not to drive the car around those of nervous disposition. Interestingly, Ferrari has worked so hard on the quality and quantity of sound from the lightweight mufflers that the engine note is all-to-often overwhelmed, despite the V8’s location only a few inches behind me.

In any case, there are thrills to come, as I flick the steering wheel-mounted manettino from Sport to Race mode. This setting makes the 16M’s suspension stiffer and more responsive, the gear changes faster, the exhaust note even louder and the traction and stability controls noticeably more liberal. Race mode effectively increases my speed into and out of corners, yet makes even power oversteer feel natural and unfussy.

Unsurprisingly, given the ruptured state of the roads around Maranello, the traction and stability control system kicks in repeatedly. The intervention is almost imperceptible, however, and the subtle helping hand reins in the inevitable missteps that stem from over-confidence. That’s the thing about the 16M: After less than an hour in the car, any notion of prudence I started with has already departed via the open roof. Such is the quality of the handling combined with those electronic nannies, and it also helps that the brakes are so amazing I feel I can stomp my way out of any bad situation. 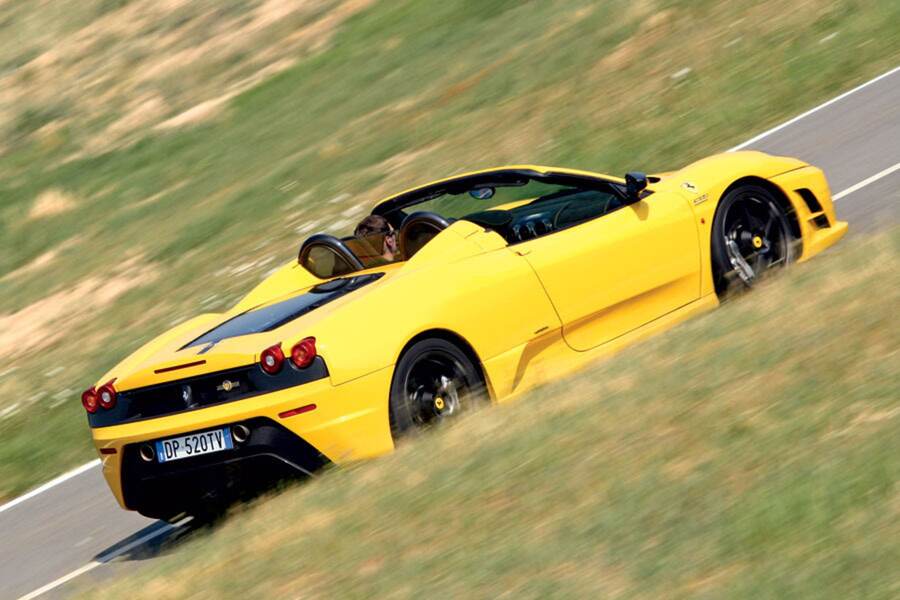 Like the Scuderia, the 16M allows me to soften the shock-absorber settings on the bumpiest sections of tarmac, making it easier to transfer power to the ground. This detail, requested by none other than Michael Schumacher, further underlines the 16M’s combination of finesse and urgency. Perhaps relatedly, I have no sense whatsoever that this open-top machine has been toned down in any way compared to the berlinetta.

IT’S HARD TO DESCRIBE A CAR THIS AGILE, with such tremendous pace, that’s so decisive no matter what road I throw at it. Perhaps the best references lie in the world of science-fiction: If the 16M had appeared in the Transformers movies, I imagine a burst of vivid colors flying through the screen, accompanied by a soundtrack of shrieking metal, then suddenly revealing itself as sleek, awe-inspiring robot shaped like Usain Bolt.

There’s a dichotomy here, however, in that the 16M also could be used as a reasonable tourer. It offers sufficient range from its 25-gallon fuel tank, ample luggage space and, in its softer suspension setting, decent ride quality. Plus, the slightly plusher interior, the stereo and the soft top go a long way toward making me forget I’m driving a near-racing car on the open road. 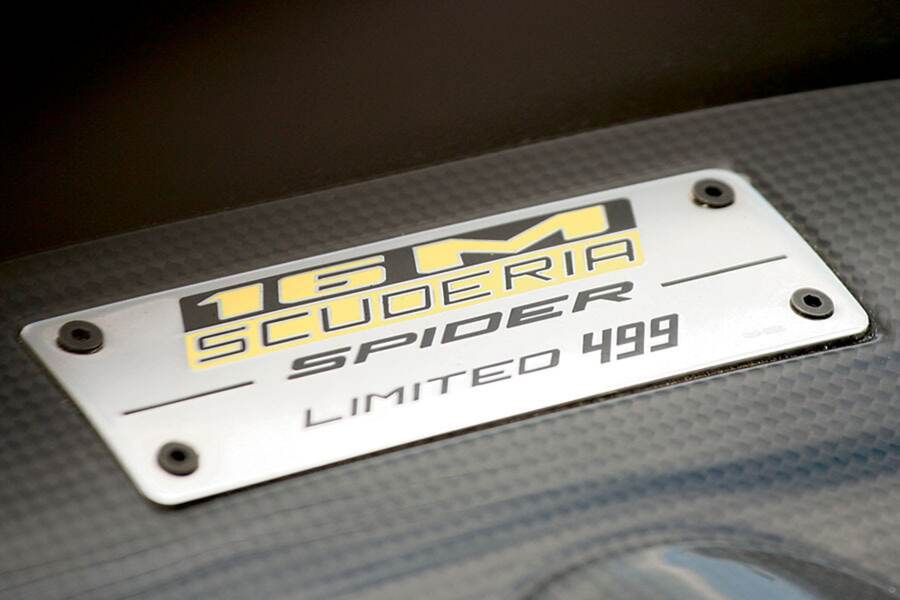 But once I start driving hard, these amenities are of no consequence: This car simply begs to be thrown down a constantly undulating ribbon of asphalt. When I push the accelerator pedal to the bare metal floor, the 16M reveals itself to be every bit as mad as the 430 Scuderia. More so, even, when the top is down and the sensory experience is all-enveloping. The most common term used to describe the supercar experience is probably “visceral,” and it’s perfect in this case, because the 16M has grabbed my viscera and rocked them around my abdomen from the word go.

At the end of a long day behind the wheel, I’m simply baffled by the 16M’s combination of driver-friendliness and tamed brutality. Hard-core it may be, but it is also impressively refined for a convertible that delivers such incredible performance; the chassis feels every bit as stiff as the Scuderia’s. This is a true driver’s car, one that almost magically manages to combine the best attributes of F430 Spider and 430 Scuderia. Forget my expectations—the 16M practically exceeded my imagination. 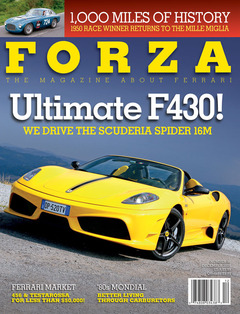