With the HGTE package, Ferrari engineers set out to improve the 599’s performance without reducing its comfort. Did they succeed? 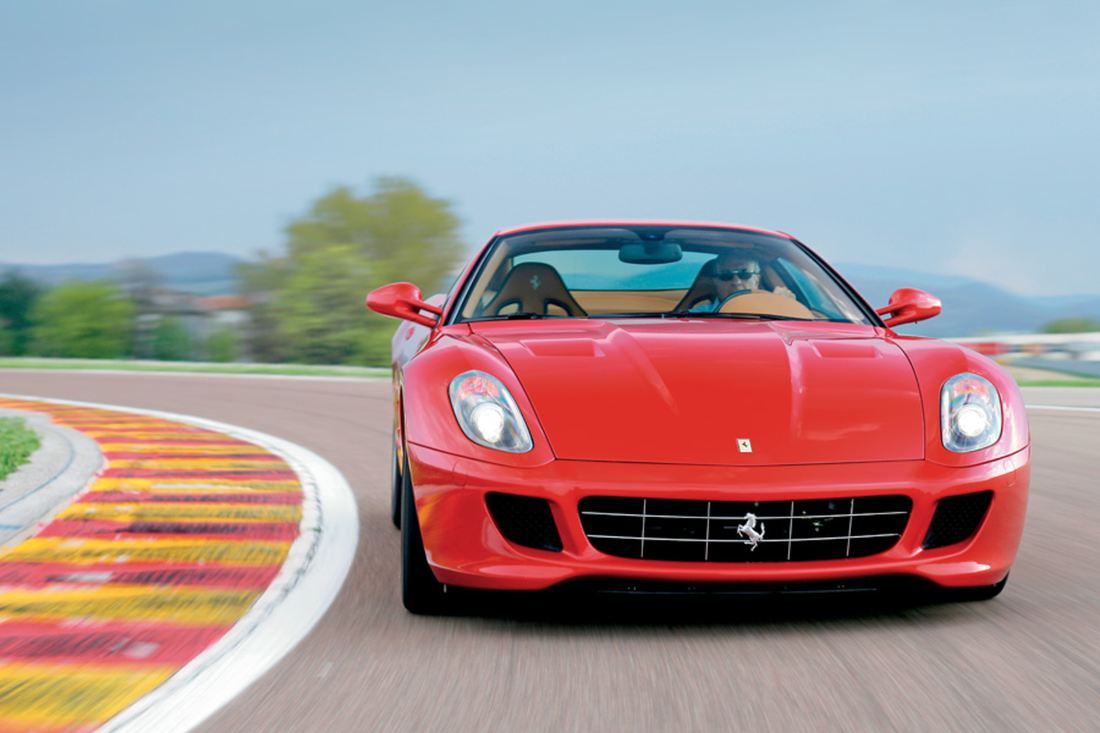 Il meglio è nemico del bene is an old Italian saying that translates as “better is the enemy of good,” deriding man’s constant desire for bigger, faster, more. However, a never-ending quest to push the limits of design and engineering is the very essence of that most Italian company, Ferrari. So while there might be a hint of irony here, it comes as no surprise that, even in these difficult economic times, Ferrari has introduced an optional upgrade aimed at enhancing the driving experience of its already state-of-the-art 599 GTB Fiorano: the Handling Gran Turismo Evoluzione (HGTE) package.

First introduced at the Geneva Auto Show in March, where it was overshadowed by the outrageous 599XX, the 599 HGTE looks fabulous when I see it at its namesake circuit in Maranello. The warm, early morning sun gently caresses the bodywork’s muscular curves, revealing a beauty I hadn’t before seen. It soon becomes evident that the car’s striking color, which photographs do not do justice to, is responsible; our tester is clad in an incandescent red which has yet to be officially named. Unofficially, Rosso Fuoco, or “Fire Red,” will do for now, and it may well stick, as the sun’s rays really seem to set the three-layer paint ablaze. (The hue changes dramatically depending at which angle the light hits the surface.)

Externally, very few cues reveal that this 599 has undergone the HGTE treatment—a slightly different front grille and a set of 20-inch five-spoke three-piece alloy wheels are the main tip-offs. The wheels, which shed 11 pounds of unsprung weight between them, feature diamond-finished forged spokes with a sharp-edged design. At 8.5 inches, the fronts are slightly wider than the regular 599’s 8-inchers, although they still wear 245/40 tires. The rears are the usual size: 11 inches across, shod with 305/35s. The Pirelli P Zero  tires are new, which I’ll discuss in a moment. 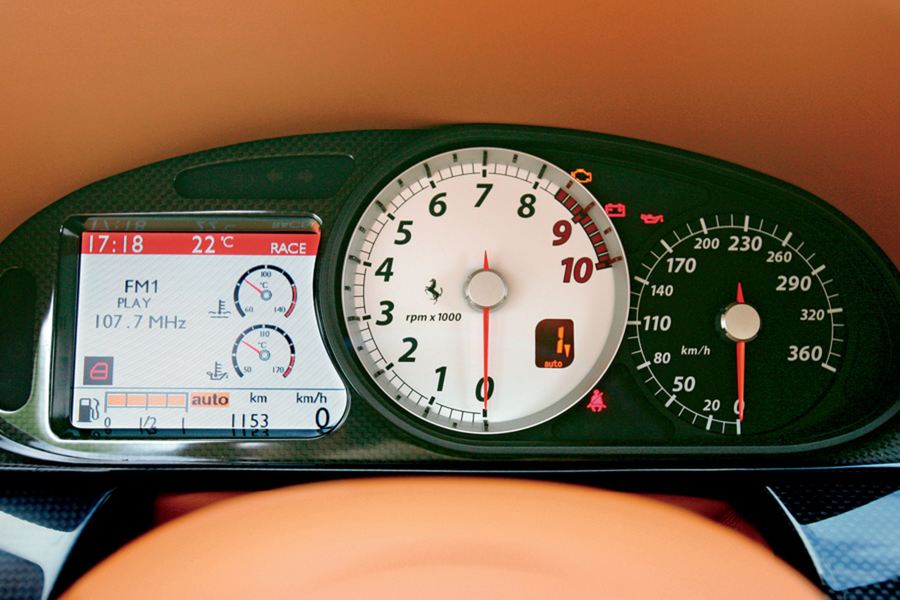 There are two grille options available. The first is a slightly more open fascia, with just two horizontal slats and four vertical ones compared to the standard three and five. The second possibility is a simple black mesh. In both cases, the finishing touch is a brushed-aluminum Cavallino Rampante instead of the usual chromed version. And, lest I forget, the package also includes a matte-black diffuser and chromed exhaust tips, though the latter are so subtle I don’t even notice them.

Inside the car, carbon fiber dominates. The HGTE package utilizes the high-tech material on the dash, door sills, door panels, seat backs, shift paddles and two new center-console trim pieces. The tachometer features a white face, in place of the usual yellow or red. The soft trim is a well-balanced mix of leather and Alcantara; it delivers a lavish yet racy overall impression. Finally, “Handling GTE” is embroidered on the seats’ back rests, adding a neat closing touch to a very convincing ensemble.

The appetizers are clearly compelling. Will the main course be as tasty? 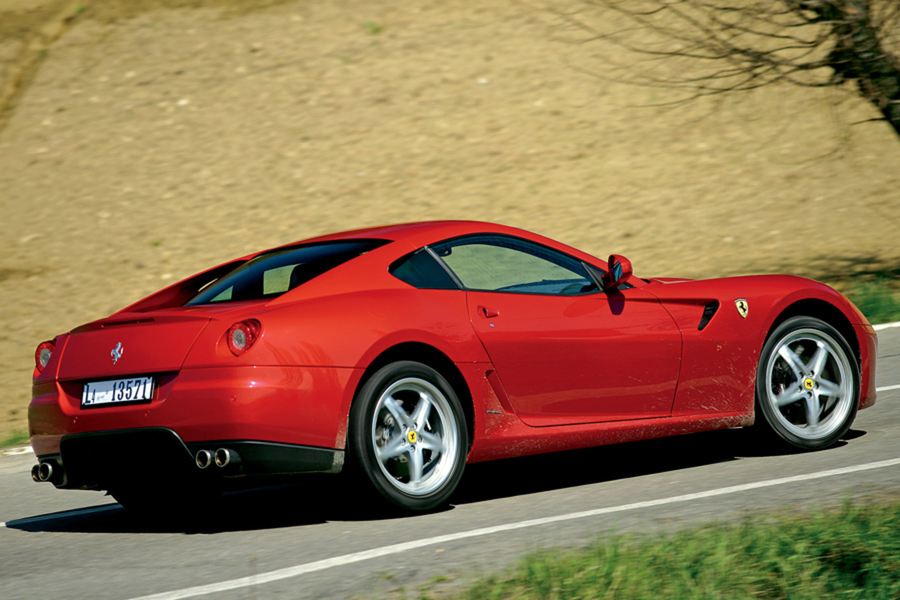 AS ITS NAME SUGGESTS, the HGTE option focuses on improved handling. While the regular 599 is an all-conquering car in almost every sense imagineable—an engine descended from that of the Enzo and performance figures that read like a Guinness Book of Records entry—it does not deliver the last word in body control. Indeed, the Fiorano leans noticeably during fast transitions, as well as fore-and-aft during acceleration and braking. The car manages to maintain a leech-like grip on the road, but many enthusiastic drivers have wished for a more sporting, planted experience.

With this in mind, Ferrari’s engineers have fine-tuned the 599’s suspension with a 10mm reduction in ride height, firmer springs all around (17 percent front, 15 percent rear) and a thicker rear anti-roll bar (25mm instead of 23.5). The magnetorheological dampers received new settings to match the rest of the suspension modifications.

The steering was also sharpened to better match the chassis upgrades. Specifically, the engineers describe a “20 percent decrease in lock required to steer around a constant-radius bend when the car is developing over 0.8 g of lateral grip.” 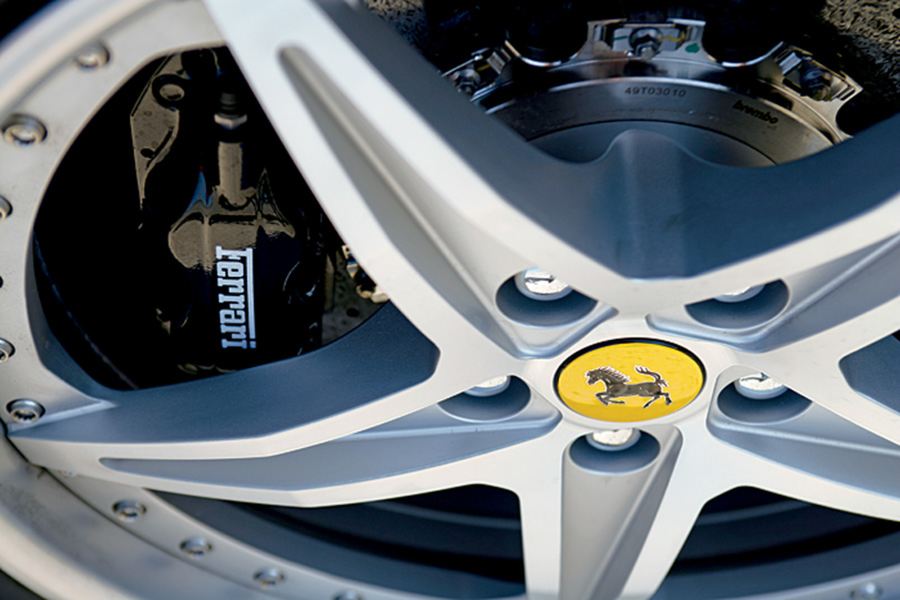 While there was no attempt to increase horsepower, the drivetrain was not exempt from alteration. Updates are concentrated chiefly on the F1-SuperFast transmission, which now allows faster gear changes (85 milliseconds compared to 100) and multiple downshifts: The ’box will drop gears in rapid succession under hard braking when the driver pulls and holds the left shift paddle.

Throttle response has also been improved with what Ferrari insiders call a redesigned “strategy.” Subtle as such upgrades may seem, they reveal a seriously comprehensive development program that touched upon all of the car’s main systems.

Critically, this included the tires. One of the main targets in developing the HGTE package was to take advantage of rapid advances in tire technology. Explains product marketing manager Marco Valentini, “If we were to follow the evolution of tires to fully exploit their performance level, we would need to come up with a new handling package every year.” 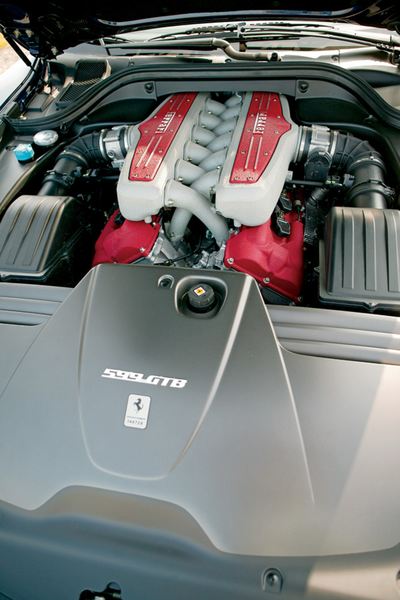 Indeed, such is the rate of progress that, in the three years since the 599’s launch, Ferrari is confident the car’s driving experience has been taken to a whole new level. I’m told that what looks on paper to be “just” a few suspension tweaks has actually resulted in a massively improved car. Let’s find out.

MY DAY STARTS WITH A FEW DEMONSTRATION LAPS with Scuderia Ferrari test driver Luca Badoer around the Fiorano test track. Riding shotgun with a Formula 1 pilota is always enlightening, primarily to discover just how late a car can brake for a turn and just how fast it can power through it. With a season-long testing ban in effect for all F1 teams, Badoer seems to relish this opportunity to play around; the tires are soon taking a very hard beating, complete with casual four-wheel smoking drifts. This kind of treatment reveals both what a wonderful track toy the car would be and how expensive such a day could be in terms of tire wear!

The 599 HGTE is a not-insignificant 0.6 second faster around Fiorano than the standard car. To put that into perspective, a similar improvement in lap times could be achieved by reducing the car’s weight by nearly 220 pounds, but that would mean compromising the 599’s luxury mission. (Weight reduction will be a priority in upcoming models, but the only practical way to do so in an existing car is to strip it, as was done for the hard-core 430 Scuderia.) Alternately, Ferrari could have hiked horsepower significantly, but that would have cancelled out the improvements in fuel consumption and emissions gained in 2008 through new engine-management mapping and reduced frictional losses inside the crankcase. 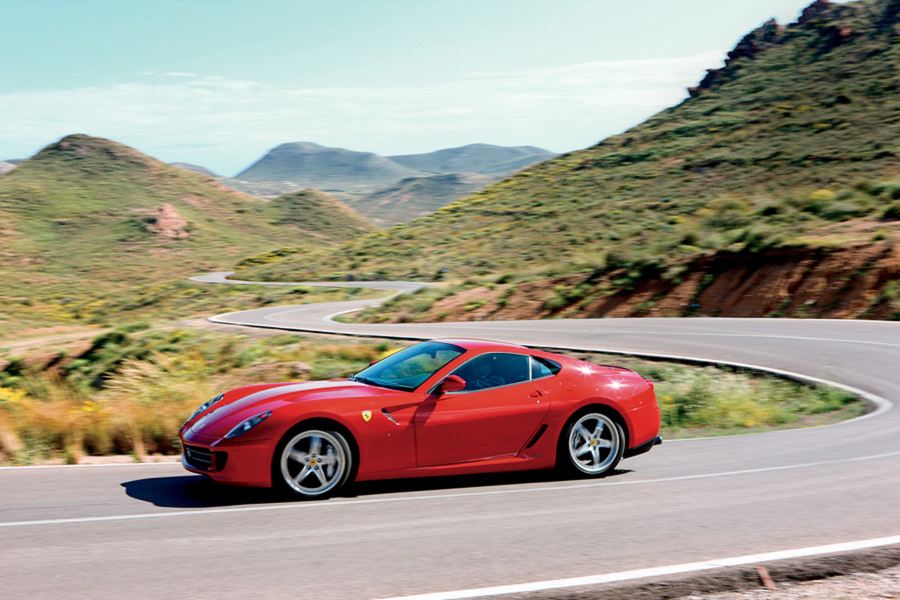 After Badoer has shown me how it’s done, I strap myself behind the wheel for my own set of hot laps. While I can’t hope to match his times, I do discover that the HGTE-equipped car has essentially neutral handling balance, just like the regular 599, but that the sharper steering, greater grip from the front tires and a tad more camber translate into quicker and more stable turn-in, along with a noticeable reduction in understeer.

The really big difference, however, is the improvement in body control; the amount of roll has been reduced dramatically. (The engineers have a couple of numbers for this: First, lean is down 19 percent around a constant-radius bend; second, there’s been a 36 percent combined reduction of body movement as the car hits a succession of curves at speed.) Weight transfer is still evident—no surprise, as the 599 weighs more than 3,700 pounds—and while I have to take this into consideration, it does not dictate my racing line. Also reduced is the 599’s tendency to squat under acceleration, although there is still a certain amount of dive under braking.

The brake hardware remains unchanged from the regular car, but the firmer suspension setup does bring improved stability. Nevertheless, decelerating from high speed still causes the tail to twitch, and turning in too early hints that the rear wants to overtake the front. The 599 likes to move around, and driving with the manettino set to CST-Off—which deactivates all of the electronic goodies aside from ABS—is not for the faint-hearted, or the faintly skilled. But then, allowing even normal drivers like me to harness most of the car’s potential is why Ferrari has spent so much time developing its extremely sophisticated, and often F1-derived, driver’s aids. 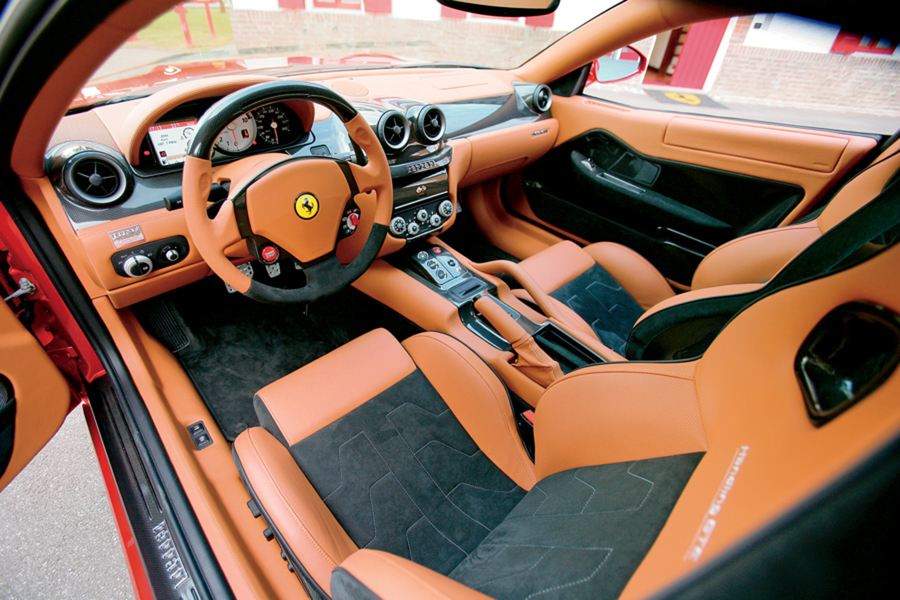 WHILE THE TRACTION AND STABILITY CONTROL SYSTEMS were largely invisible on the track, their intervention is more noticeable on the real-world roads in the hills south of Maranello. For example, while the 599 delivers astonishing traction out of corners, traction control’s presence can quite often be felt when flooring the accelerator.

Some sections of this tarmac are plagued by a brutal combination of bumps, holes and loose gravel, but the car takes it all in stride, showing sufficient suspension travel to meet the challenges thrown at it. (I do bottom it out once, landing after a high-speed bump, without consequences.) The engineers had hinted at a small trade-off in ride comfort, but as long as the manettino is not set to Race mode on roads like this, the stiffer setup is more than acceptable in exchange for the improved body control. Mind you, the interior’s carbon-fiber trim does emit the odd squeak.

Otherwise, the sound inside the cabin is dominated by the welcome roar of the 6-liter engine. For the lucky owner’s driving pleasure, Ferrari altered the exhaust to make the V12 even more melodic, especially at low frequencies. What was already a stirring symphony is now pure aural bliss. 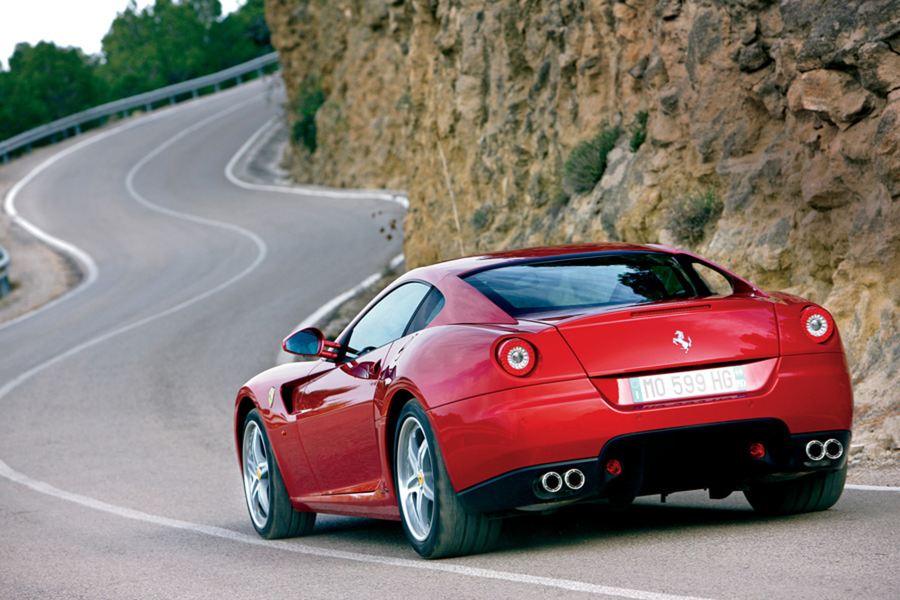 The 599 as we knew it before was a fabulous machine limited only by excess body motion. With the HGTE option, Ferrari has greatly reduced this limitation, sharpening an already great driving experience without sacrificing comfort. Having felt the difference, I’d recommend the HGTE package without reservation: For anyone other than the most casual driver, it is just too good to pass up. 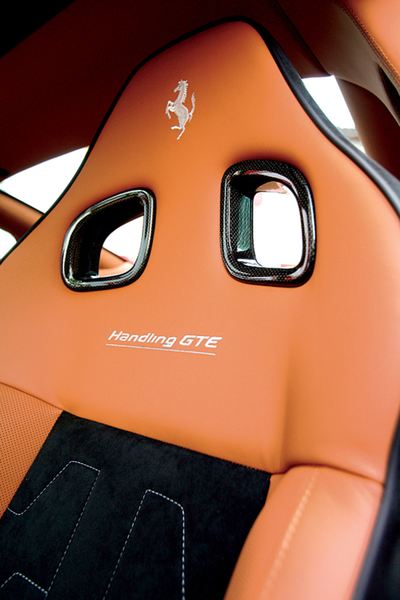 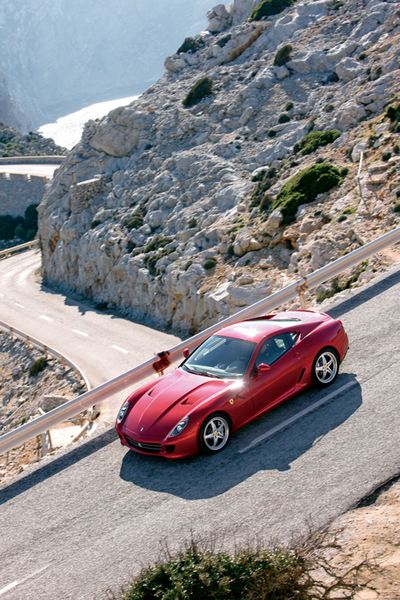 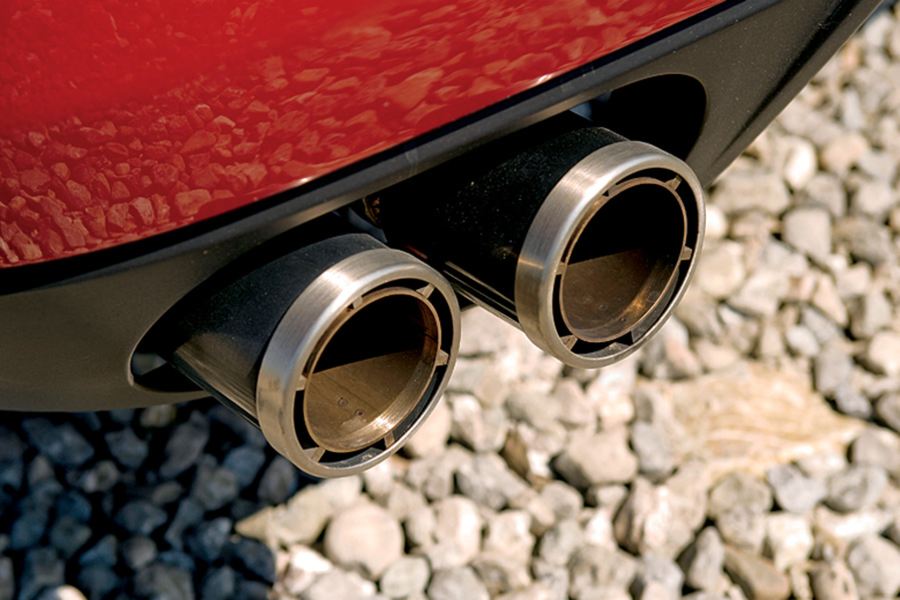 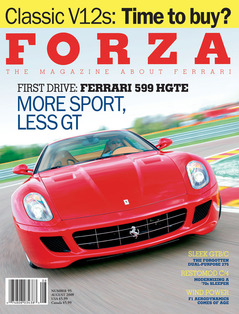