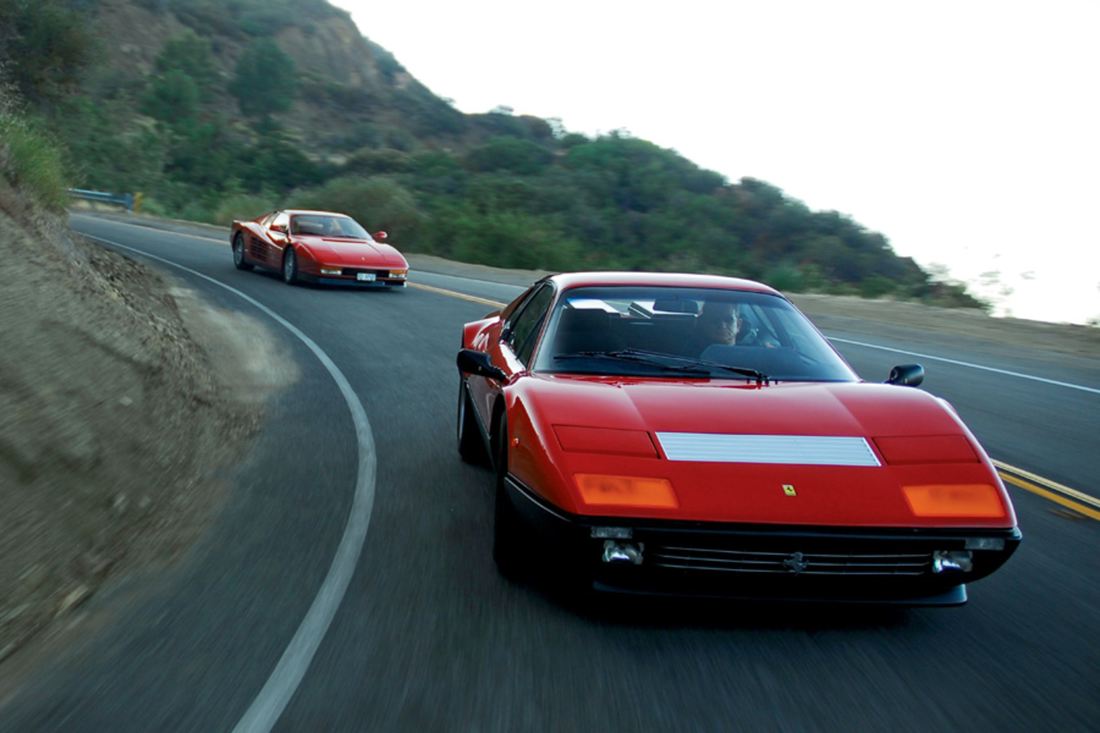 In the early 1970s, Ferrari brought its Formula 1 flat-12 engine layout to the streets in its radical, mid-engine 365 GT/4 BB. While the company had long believed that twitchy mid-engined handling and a powerful 12-cylinder powerplant would be an overwhelming combination for regular drivers, arch rival Lamborghini was enjoying too much success with its Miura for Maranello not to respond. Not surprisingly, the resulting Berlinetta Boxer was enthusiastically received by Ferrari fans.

The BB evolved over the years, culminating with the fuel-injected 512 BBi version that was produced from 1981 to ’84. Also in 1984, Ferrari introduced the model’s replacement: the Testarossa. (The name, originally used on 1950s race cars, means red head, and comes from the red-painted cylinder-head covers.) Like the BBs, the TR featured a steel tube chassis and a mid-mounted flat-12 engine, along with independent suspension and the latest disc-brake technology.

In their day, both the Boxer and the Testarossa were considered terrific driver’s cars: They were fast, relatively easy to drive, reliable and very stylish. Looking at the two Ferraris together, it’s immediately obvious that they hail from different generations. The Boxer’s swoopy lines, razor-sharp nose and high-riding rump are distinctly ’70s, while the straked and flattened Testarossa could only have come from the ’80s. Of the two, there’s no denying that the Boxer’s macho but elegant styling wins in the looks department. 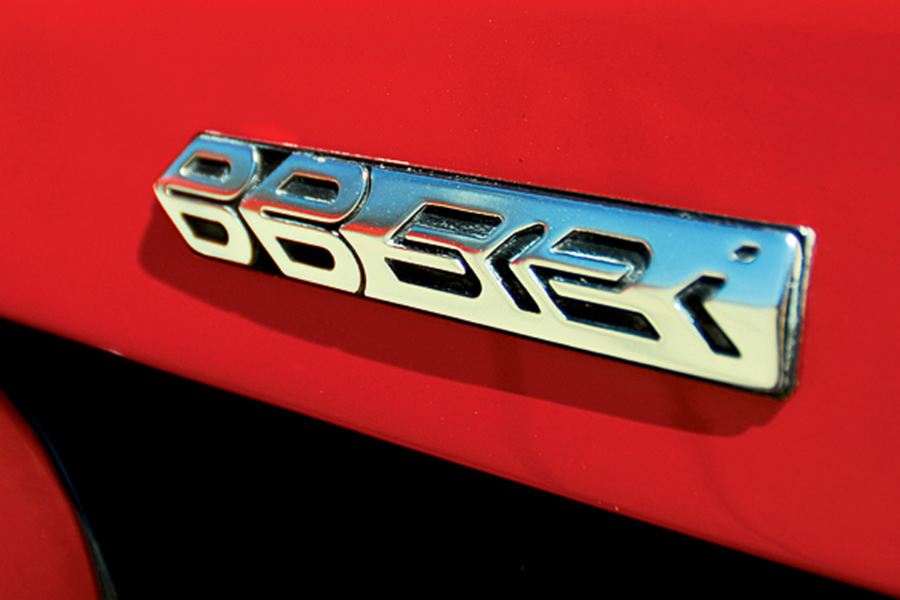 Of course, the real test is how they drive. To help gain some insight into the two car’s differences and similarities, Scottsdale, Arizona’s Kirk Axtell offered his 1984 512 BBi (s/n 48505), while Los Angeles resident Peter Batte provided his 1988 Testarossa (s/n 75383). We met in Los Angeles for a day of driving.

I DECIDE TO START WITH THE BBI, which Axtell has owned since May 2008. It is his third Ferrari, following a 330 GTC and a 250 GT Lusso; he found it in San Francisco, where it had been in storage for ten years. “It had the original brake pads and tires, and had about 17,000 kilometers on the clock,” he recalls. “I had it looked at and everything checked out okay.”

Once the Boxer’s fluids were flushed and its flat-12 motor tuned up, Axtell flew into San Francisco to drive it home. “I lit up my Cohiba cigar and drove down Route One, chasing the sunset,” he remembers fondly of that first drive home. 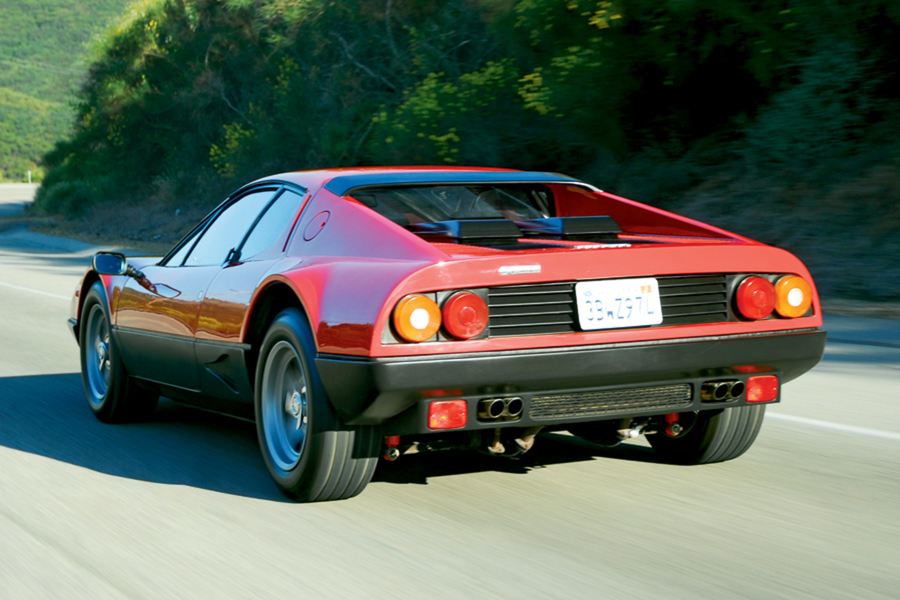 Since acquiring the BBi, Axtell has regularly shown it. His efforts culminated in a Platinum award at the 2008 Concorso Italiano. “Right now, it’s a 97.5-point car,” he says. “My goal is to make it a 99-point car.” While he enjoys showing it, Axtell is just as much a fan of driving it, which he does every chance he gets. “It has a lot of horsepower compared to the other Ferraris I’ve owned, and the torque is really good,” he notes. “This is the first mid-engined car I’ve had, so the handling took some getting used to. It really requires that you respect it.”

Axtell tosses me the keys, and I slide into the driver’s seat. The Ferrari’s interior is accommodating and comfortable, and its well-worn leather smells great. The dash feels high in relation to the low seating position, while the steering wheel, which is right above my lap, angles strongly towards horizontal. Beyond the three-spoke wheel are red-on-black gauges; to the left is a 200-mph speedometer, on the right a 10,000-rpm tachometer.

Rearward visibility is hampered by the small if stylishly curved rear side windows, but there’s terrific visibility through the steeply raked windshield. Even before I’ve started the car, the view past the instrument pod and the sharply angled fenders gets my heart racing. 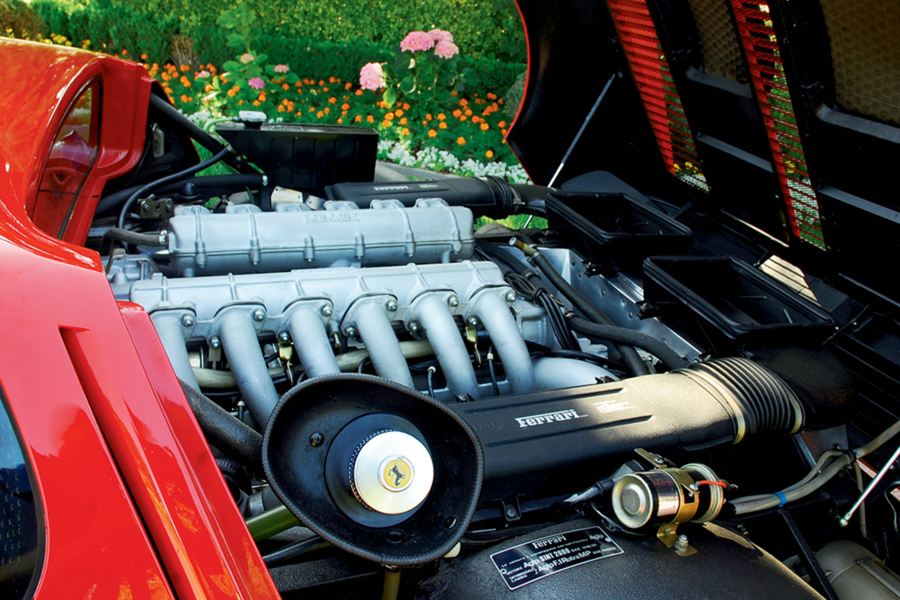 A twist of the ignition key brings a lazy and distant whir from the starter, followed by the roar of the engine. I let things warm up for a minute, then depress the heavy but easy to modulate clutch and snick the gear lever left and down into its dogleg first gear.

I pull onto the pavement and hit the gas. The rear tires kick up a flurry of dust, and the 12 horizontally opposed cylinders behind me (the “Boxer” name comes from this Orientation of the cylinders, which resembles fists punching) begin making all the right noises. The fuel-injected 4,943cc flat-12 pumps out 340 horsepower at 6,200 rpm and 333 lb-ft of torque at 4,600 rpm, and the car certainly feels quick right out of the gate. The claimed 5.5-second sprint to 60 mph is entirely believable, as the BBi accelerates strongly from as little as 2,000 rpm.

The engine revs enthusiastically up through the powerband. A deep, multi-cylinder howl spills out of the exhaust, intensifying in pitch as the tach needle swings to 6,000 rpm and beyond. The indicated redline is at 7,000, but the engine spins so effortlessly it feels as though another 1,000 rpm should be available. 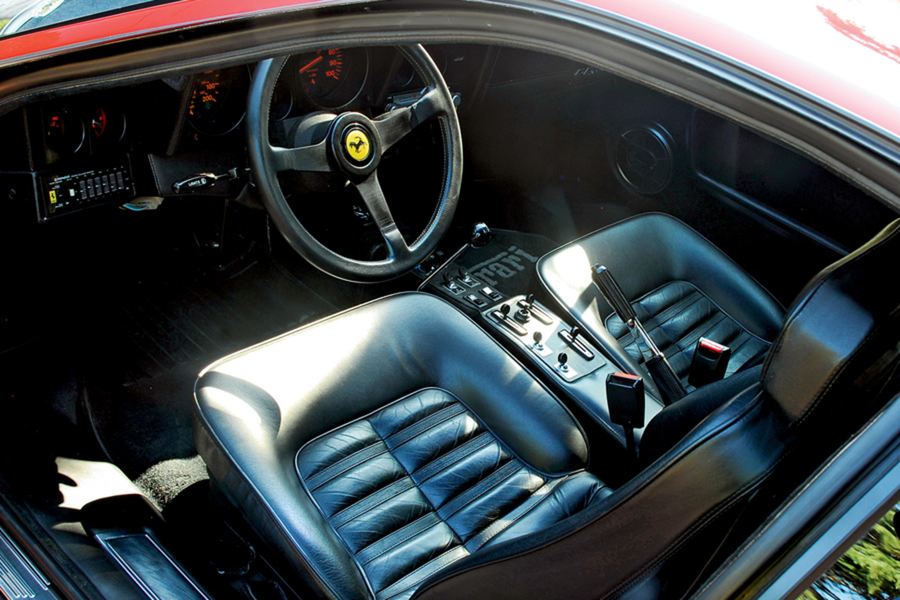 I shift up into third, then fourth and fifth. The engine pulls hard well into the triple digits, singing happily all the while. Wringing out this Ferrari in a straight line is addictive.

Cornering is a different story, however. When I dive through a series of high-speed sweepers, the car rolls on initial turn-in before taking a set on its tall, metric 240/55VR-415 Michelin TRXs. The Boxer adopts a slightly tail-out stance, letting me know in no uncertain terms that I need to remain on my game. In addition, the softly sprung car is known to suffer from a high center of gravity—the engine is mounted above the transaxle—and this is very much in evidence at higher speeds, where the Boxer moves around gently and demands a light grip on the steering wheel.

While there’s a lot going on, the Boxer is very communicative: The steering offers decent feedback, and a lot of information filters in through the seat of my pants. This input is crucial when I attack a tight, winding section of road. 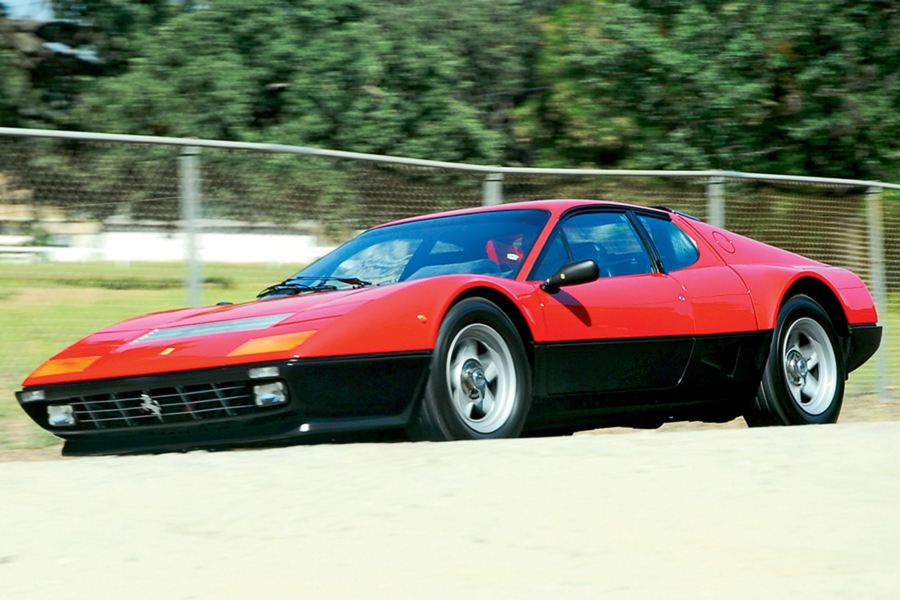 In sharp corners, the Ferrari’s front end gently washes out. But when I dial in a little more throttle to balance things out, the rear end feels like it wants to come around in a big hurry. (The Michelins may be period correct, but they don’t offer an abundance of grip.) As long as I’m respectful of the weight transfer in quick transitions, the BBi is decently nimble, but it’s no canyon carver. Similarly, while the brakes are decent and offer progressive action, there is far more horsepower than stopping power on tap.

Drive time over, I pull to a stop next to the bright red Testarossa and kill the Boxer’s engine. Sitting back for a second, I replay the experience in my mind. The older Ferrari is not an easy car to drive fast, but there is something immensely satisfying about pushing it hard. It is most at home on fast sweepers and wide-open stretches of highway, where its tall gearing and broad powerband are perfectly matched; this is a car for a high-speed run down the autostrada, not fast laps at Fiorano.

NEXT UP IS THE TESTAROSSA. Batte has owned the car since 1999: “I fell in love with it when I saw it in the Beverly Hills Ferrari showroom with a Christmas bow on it,” he says. “This car provides a wonderful GT experience, apart from the extreme performance capabilities. For instance, a trip from LA to Las Vegas can be done in relative comfort with modest luggage and golf clubs. Performance-wise, once the gearbox is warm, it is a very precise car for its day, with a very neutral feel to it. It seems to relish being driven hard.” 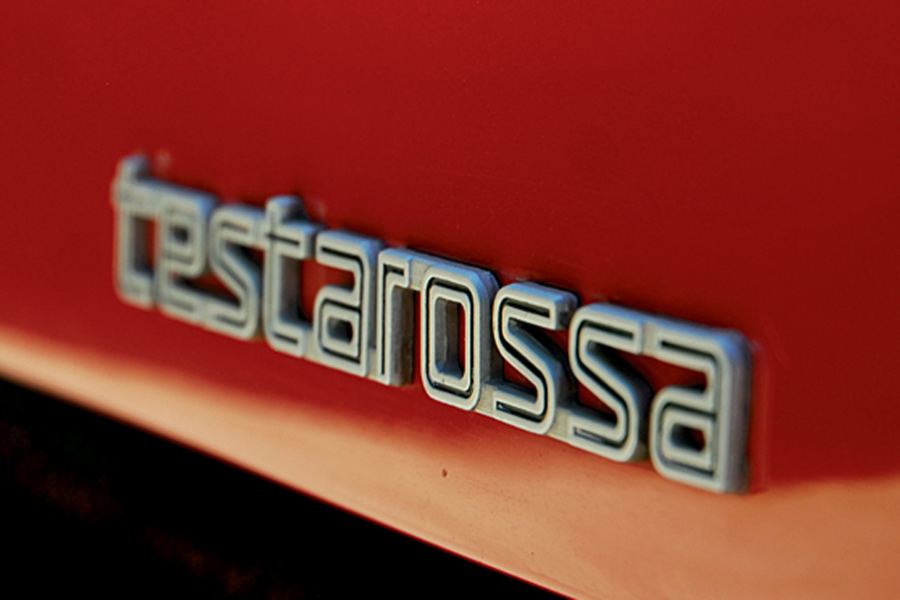 The Testarossa is waiting for its stint down the road, so I grab the keys and pull open the door. Once I’m seated, I find that the driving position is just about the same as in the Boxer, but the interior feels more spacious and has a more modern look. The seats are wider and better bolstered than the Boxer’s, and outward visibility is superior in all directions. I can easily envision a fast, cross-country trip in this car, where I’d have to give it some serious thought in the BBi.

When I release the stout clutch and pull away, I feel an initial reluctance from the car, as if the emergency brake was still on. Then I realize my shoe is brushing the brake pedal as I apply the throttle; there’s less foot room in the newer car than in the older one. After a few seconds of struggling to angle my foot to avoid the brake, I give up and remove my shoe. Much better. Now the TR accelerates the way Ferrari intended, which is to say quite strongly.

The flat-12 revs quickly and smoothly, and a ripping-canvas shriek assaults my ears as the revs climb. The soundtracks of the Boxer and Testarossa are similar, but the power isn’t: Thanks to its four-valve cylinders heads, the TR makes an impressive 380 horsepower at 5,750 rpm, 40 more than its predecessor. 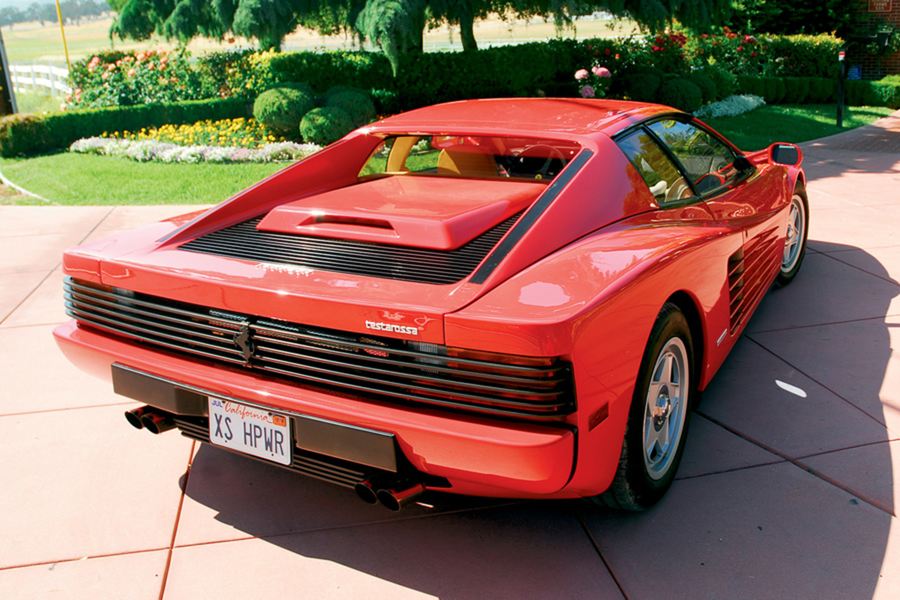 Peak power comes earlier in the powerband than in the BBi. This, coupled with the 344 lb-ft of torque on tap at 3,800 rpm, gives the four-valve engine even stronger mid-range urge—it seems downright heroic at times. The car feels quicker than its stated 0-60 mph time of 5.2 seconds, and if the strength of the motor is any sign, the official 180-mph top speed is just a long straight away.

Even before I reach the first bend, I can feel that the Testarossa’s chassis is much more rigid than the Boxer’s, which felt relatively flexible. The new car is more stable at speed, too: In the same high-speed sweepers that were a borderline white-knuckle experience in the BBi, the TR feels much more planted, with less roll and better grip. In addition to the revised chassis and wider rear tires, credit must go to a two-inch-longer wheelbase and a slightly wider track.

When I point the Testarossa’s wide, flat nose down the same tight, winding road that so unsettled the Boxer, I quickly discover that, while it’s still a big, heavy car, it feels much more nimble. The TR turns in quickly, and understeers much less in the tighter turns. And this time, I’m able to get on the gas confidently, letting the rear tires slip as I arc past the apex and dialing in the appropriate amount of opposite lock. The quick-revving engine pushes me back in my seat as the TR howls out of the corners. 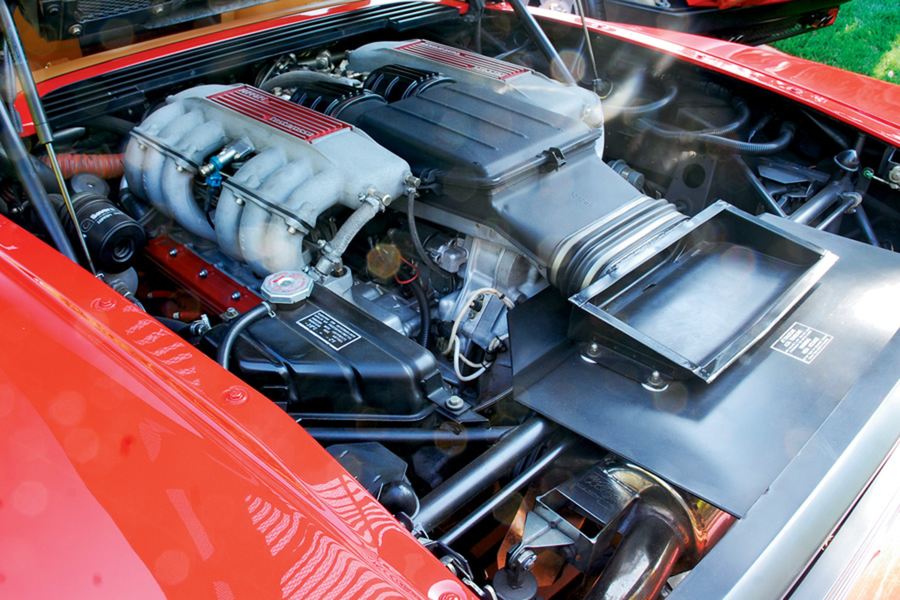 In addition, the slicker-shifting gearbox allows me to swap cogs quicker and with more confidence. But when I stand on the brakes to shed some speed, I discover that, like the Boxer, the TR delivers more go than whoa.

Nonetheless, it’s easy to see why this Ferrari received such rave reviews during its heyday. Some 20 years after it left Maranello, the TR is still an impressive performer, though like the Boxer it needs to be driven with respect—there are no modern-day electronic safety nets to rein in the big back end when it breaks loose.

IF I HAD THE OPPORTUNITY to buy one of these cars, I’d choose the Testarossa for its higher performance. Early TRs can be found for less than $60,000, and that’s not a lot of money for this much car. 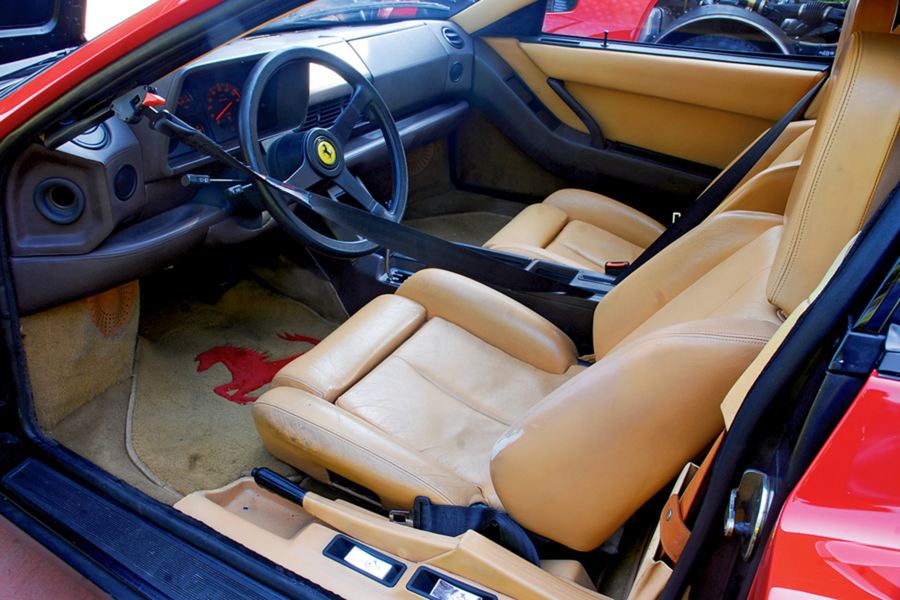 Financially, the Testarossa looks even better on a relative scale, as I could buy two TRs for the price of one Boxer. Rarity plays a role in the disparate values: Ferrari only made 2,300 BBs of all types, none of which were officially imported to the U.S., compared to the 7,177 Testarossas that rolled off the assembly line between 1984 and ’92.

Objectively, though, both of these Ferraris offer iconic looks that place them perfectly in the eras from which they sprang, as well as exciting, relatively raw driving experiences. You really can’t go wrong with either one. 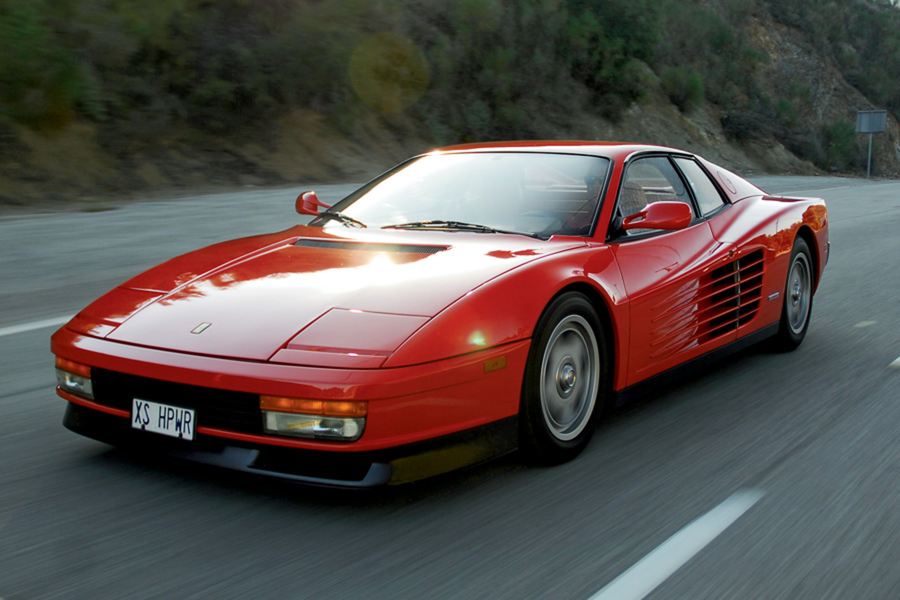 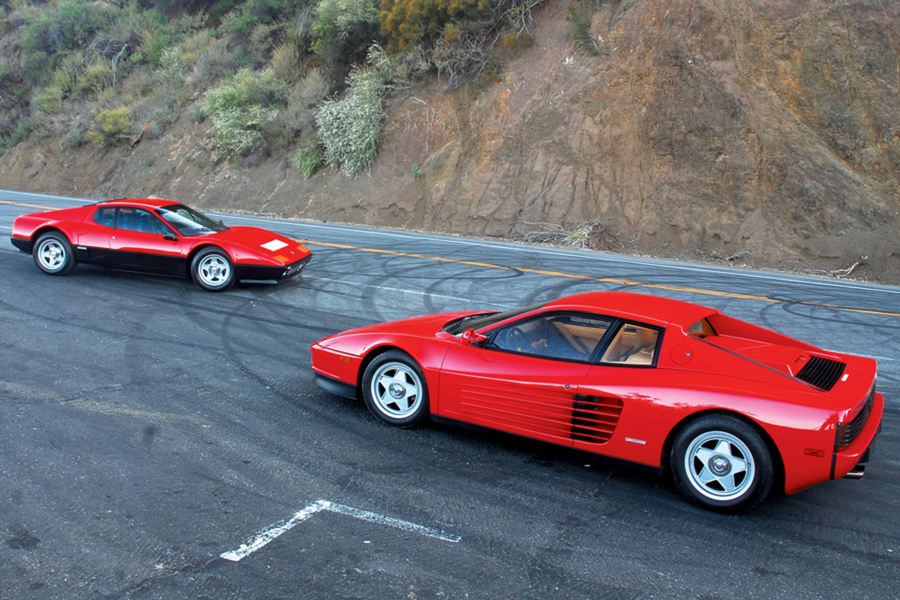 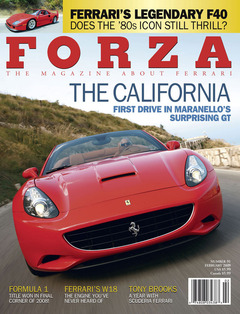