Evoluzione of the Species

S/n 74049 and its seven prototype siblings paved the way for the production F40. 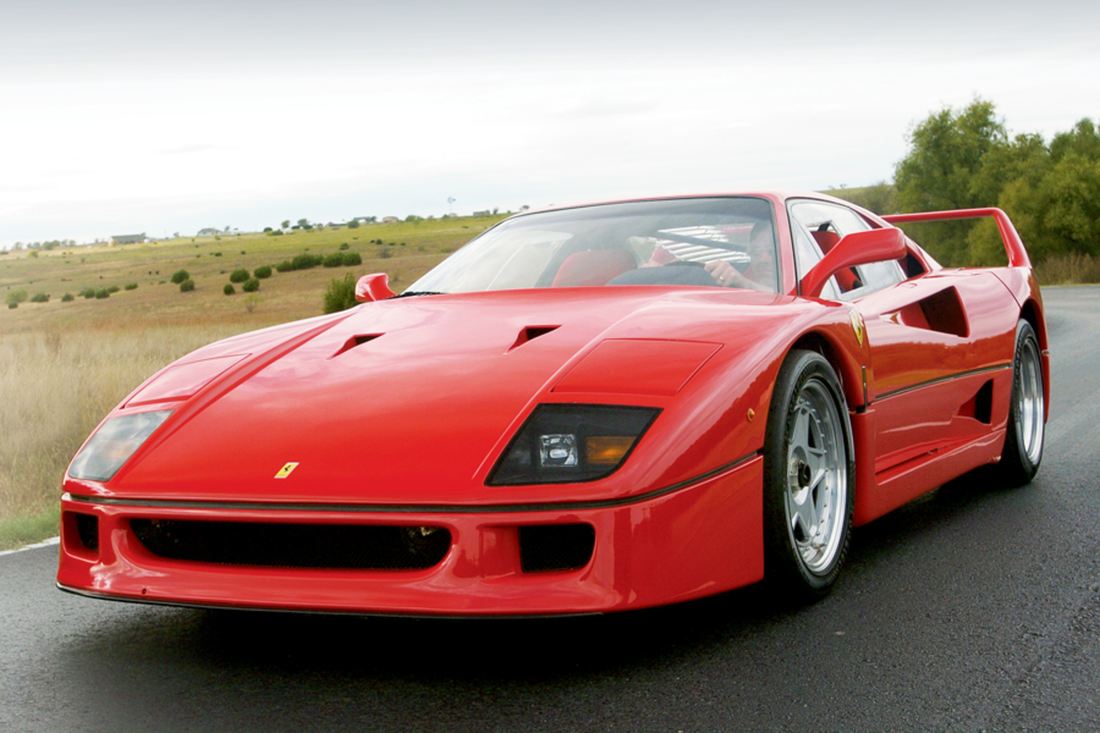 Any Ferrari F40 is special, but our featured example, chassis number 74049, is truly extraordinary. One of a handful of prototypes built before production began, s/n 74049 is stuffed with one-off goodies that make it much quicker than a standard car. Think of it as a cross between a roadgoing F40 and a racing F40 LM. If the standard F40 is a racing car that is happy to be driven on the street, s/n 74049 is a racing car that would have to be dragged kicking and screaming onto the road.

The first “F40 prototypes” were not F40s at all, but 288 GTO Evoluziones. Five of these development exercises were built, wearing bodies that had a mixture of GTO and F40 styling cues. The chassis and suspension parts developed for these cars would find their way under the upcoming new model. 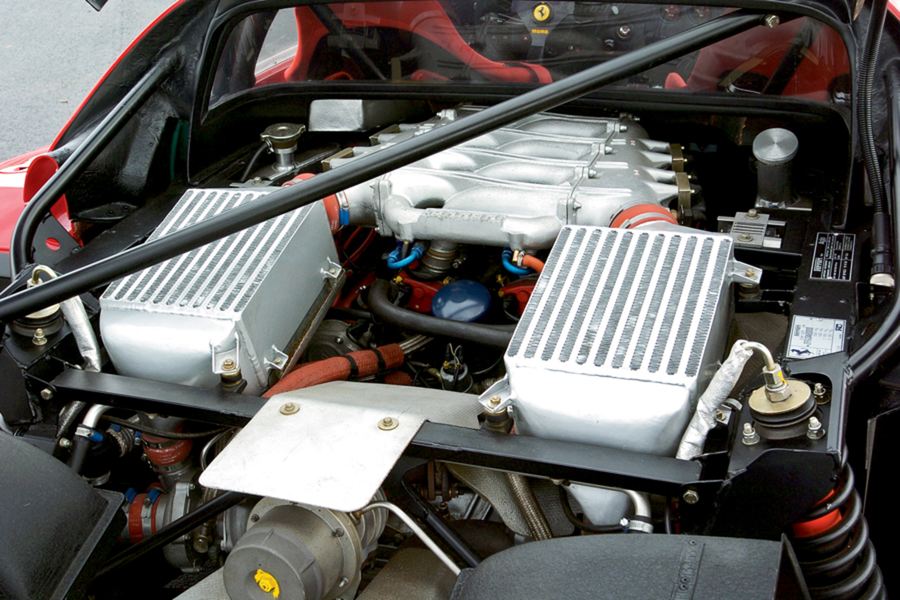 The testing life of the individual cars is unknown, but we do know that one prototype was used to test the suspension system, another was used to fine-tune noise levels, pollution gear and brakes (power brakes were tried and rejected), one was sent out for promotional purposes, one gave its life against the crash barrier to satisfy American safety regulations and one was used as a training dummy to instruct production-line workers.

Track testing was done at Fiorano, Nardo, Imola and at the Alfa Romeo test track at Balocco. Street testing took place on thousands of miles of Italian roads. As the development process progressed, newer prototypes incorporated changes suggested by earlier testing. Thus, each F40 prototype differed in detail from the others.

There are also visual differences from the production version. For example, the prototypes’ tail sections have five louvers on each side, behind the wheels, while the street cars have only four. Door mirror placement varies from prototype to prototype; some early cars have no outside mirrors, others have mirrors mounted on the side window, while the street car’s mirrors are pedestal-mounted to the door itself. The Plexiglas engine covers are also different, with some prototypes having more slots than standard. 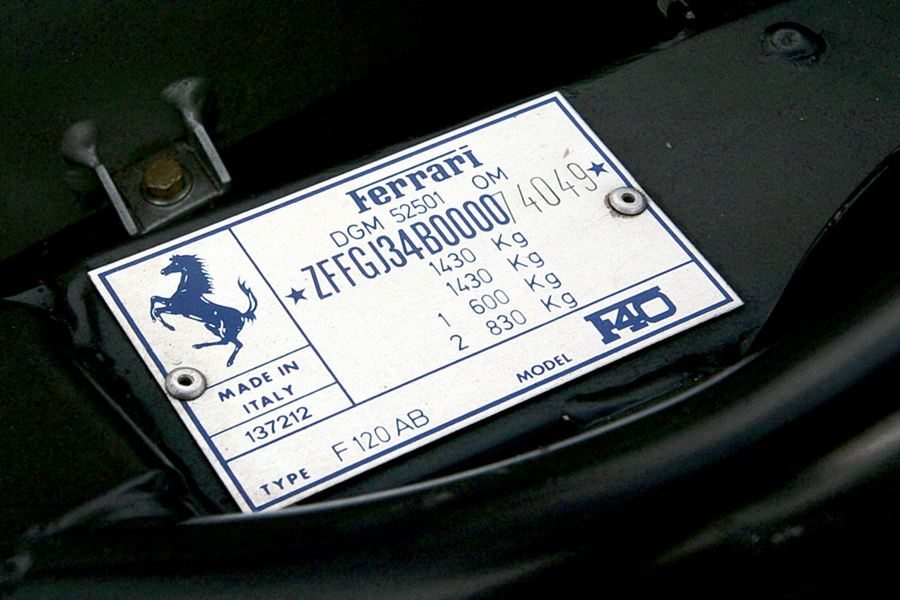 And our featured car, s/n 74049? After its testing days were over, this prototype reportedly spent time in the Ferrari museum before ownership was transferred to a member of the Italian royal family—however, this has not been confirmed. The car came to America in 1995.

To get a handle on just how different s/n 74049 is from a production F40, we recruited Master Technician Michael Luongo, who maintained this rocket ship for several years. Luongo completed the factory training course for the F40 back when the model was new and has worked on many standard F40s, making him the perfect tour guide to show us around under the prototype’s skin. 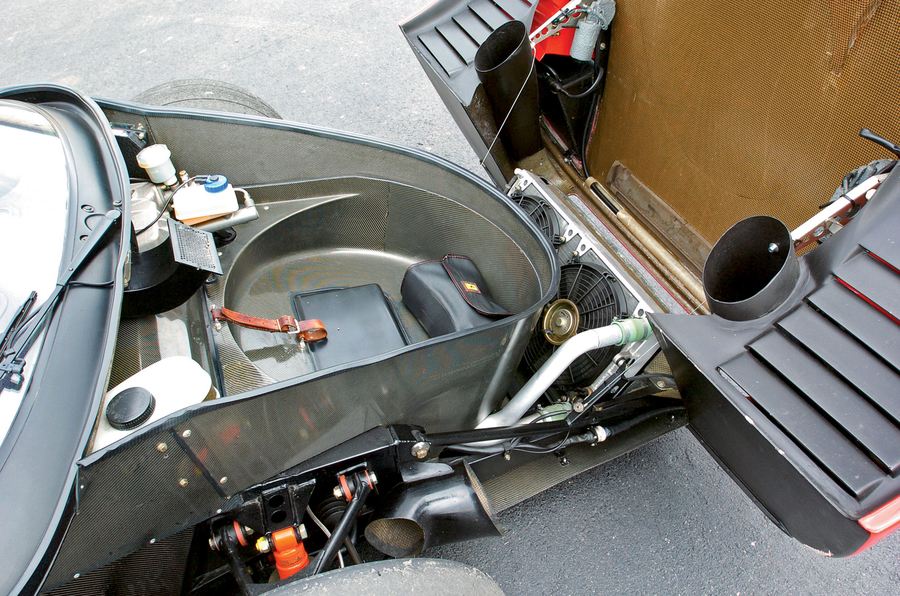 S/N 74049’S CHASSIS appears to be the same as the production F40’s: a steel tubular frame, built by Ferrari supplier Vaccari, that’s been reinforced with carbon-fiber and Kevlar panels. However, the body panels are lighter than stock. The hood, doors and rear deck replicate the European production items (no bumper protection like on the U.S. version), but are thinner. The doors have Lexan side windows with sliding vents, as did the first 50 or so production cars before customer complaints caused Ferrari to switch to heavier glass roll-ups. Like the Euro-model F40s, s/n 74049 has a Kevlar belly pan and no side-impact bars in the doors—production U.S. versions received steel door beams and a steel belly pan.

The five rear side vents on each side are consistent with the other prototypes, while the Plexiglas engine cover has 20 small slots, versus 11 larger ones on the production car. S/n 74049’s side mirrors are mounted to the Lexan windows. In back, the license-plate area is flanked by twin fog warning lights, which were only fitted to European models—and even then, they were usually on the lower valence. There is no high brake warning light on the rear deck as found on the U.S.-spec version.

S/n 74049’s dashboard and instruments are standard Euro F40, although racing seats and Sabelt five-point harnesses are fitted on both sides. Interestingly, this prototype has air-conditioning. 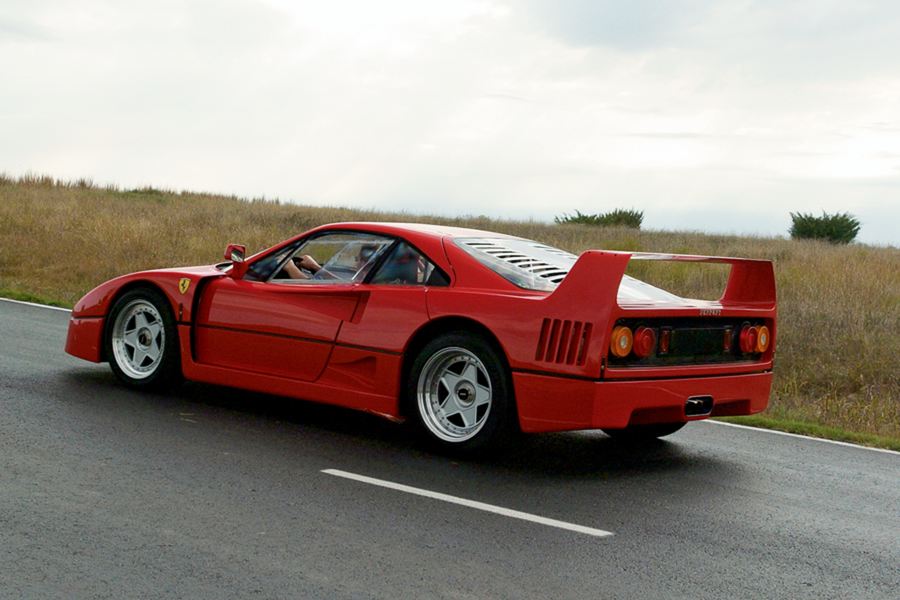 Underneath, things are subtly different from the production car. Suspension bushings are stiffer than usual, similar to those on the F40 LM. Luongo reports the corner weights are within seven pounds side to side—which is impressive, since the car doesn’t have adjustable coil spring lands to help tune weight distribution.

S/n 74049 is fitted with the production F40’s optional hydraulic adjustable ride height system. (Luongo says this was originally installed on very few cars, but has since been retrofitted to many.) The system can be manually switched on to raise the car for traversing bumps, or, in automatic mode, will progressively lower it as speed increases.

Normal ride height is 4.9 inches, which can be raised to 5.9 inches at low speed. In auto mode, ride height drops to 4.1 inches at 75 mph. This caused some alarm when Luongo ran the prototype on a chassis dynamometer: As wheel speed increased, the system tried to lower the strapped-down car! 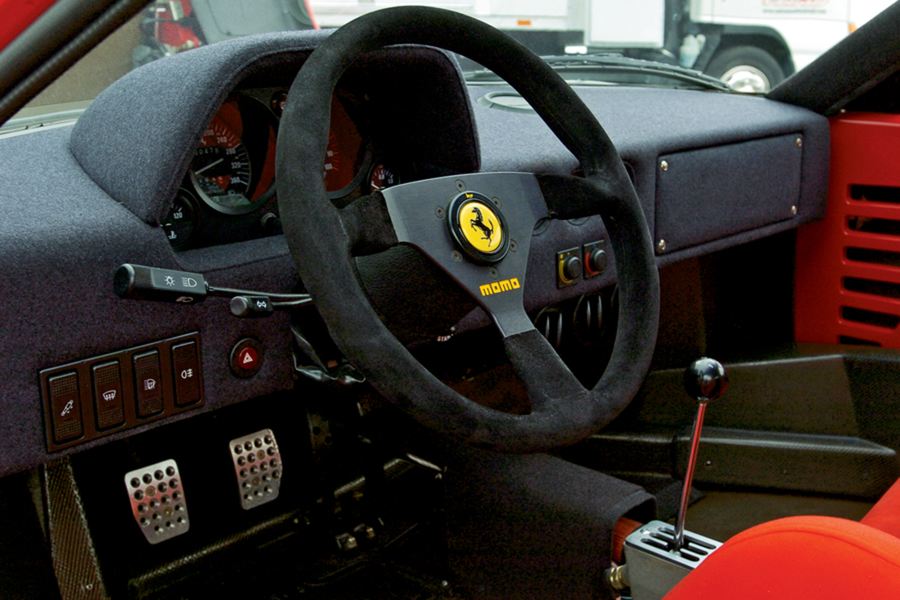 S/n 74049’s calipers and rotors are standard F40 fare, although aggressive racing brake pads have been fitted. When loaded onto the scales, the prototype weighed in at 2,800 pounds wet—nearly 200 pounds less than the 2,976-lb. dry weight of a U.S.-spec F40. (The competition LM reportedly weighed 2,315 pounds dry.) Ferrari initially announced the street F40 would weigh in at 2,425 pounds, but this turned out to be optimistic.

UNDER THE REAR DECK LIVES A BEAST. The standard F40 engine was a Tipo F120A, while the much hotter F40 LM received a Tipo F120B. S/n 74049’s engine plate states that it has a Tipo F120AB, which must be a cross between the two. Although most major components are the same as on a standard F40, Luongo says the prototype belts out around 575 horsepower—without air passing through its intercoolers. That’s almost 100 horses up on the 478-hp Euro F40, and only about 160 ponies shy of an LM.

S/n 74049’s IHI turbochargers are different from the production car’s, though they are not the same as the ones on the LM. The intercoolers are standard, but do not wear the BEHR lettering of the street-car units. The air-cleaner housings are subtly different. Like the European F40s, s/n 74049 does not have a catalytic converter. 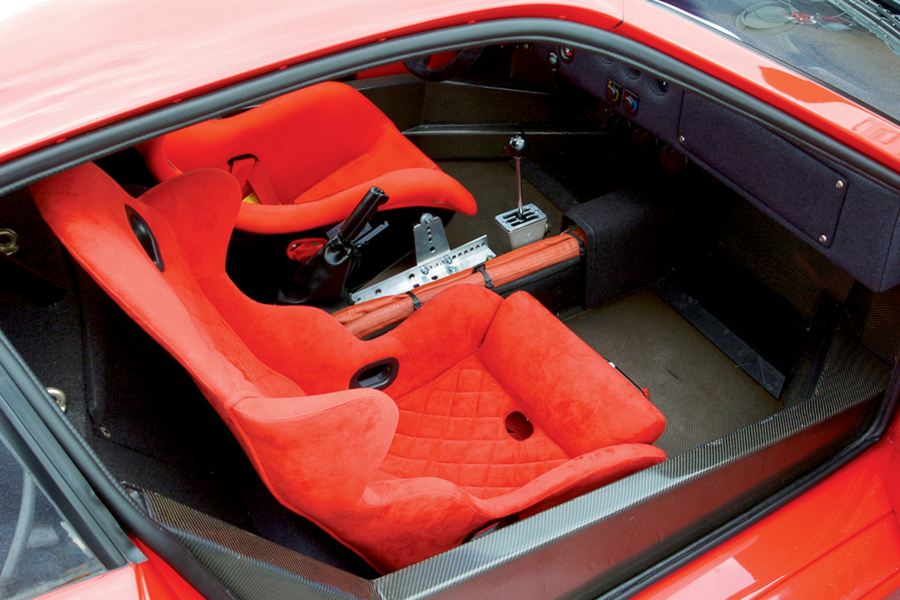 The car’s ECU is a one-off unit, and many of the brackets for the exhaust system are hand-fabricated. The fuel-cell housing is made from carbon fiber.

The gearbox looks like that of the production F40, though its case is made of magnesium instead of aluminum. S/n 74049 is fitted with a three-plate (versus two on the standard car) AP racing clutch. Many components sport hand-lettered part numbers, presumably so they could be changed as the project developed.

WE WERE ABLE TO RIDE SHOTGUN in the car for a handful of scalding laps at Motorsport Ranch in Texas, and it was clear that the prototype is both faster and more stable than the roadgoing F40 we sampled there way back in 1999 [“Clash of the Titans,” FORZA #15]. 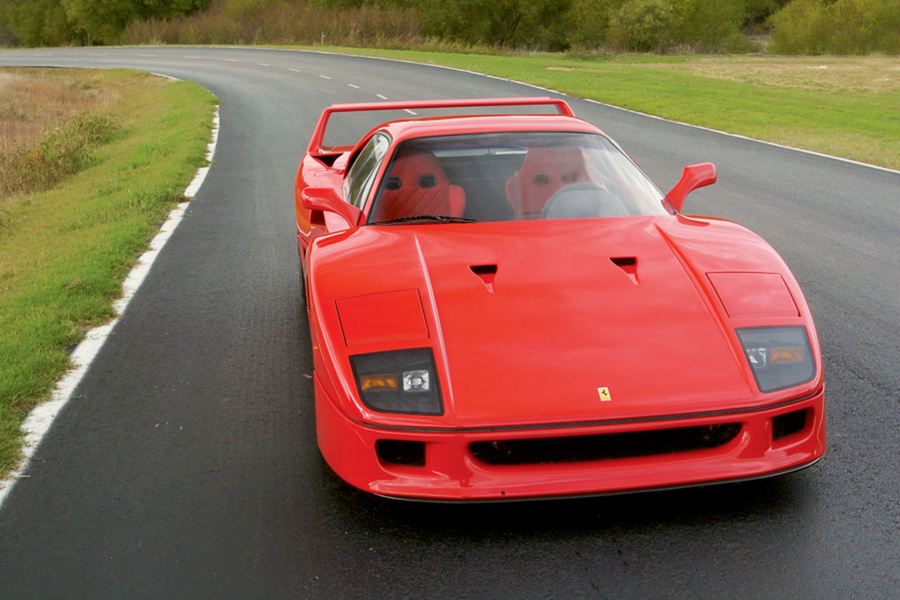 Overall, s/n 74049 didn’t feel as fast as it was really going—we briefly saw 160 mph on the relatively short straights—a testament to the car’s engineering. A Ferrari spokesman once said the F40 was designed to handle 650 hp, and after riding along as we cranked off lap after lap with little drama, we can believe it. We were lucky to have this experience, as the prototype only had about 800 kilometers on the clock at the time, and its owner soon decided to curtail its track use.

But even without turning a wheel, s/n 74049 is a fascinating car. In addition to being the forebear of one of the most special Ferraris ever, it offers a first-hand look into the rarely seen world of factory development. 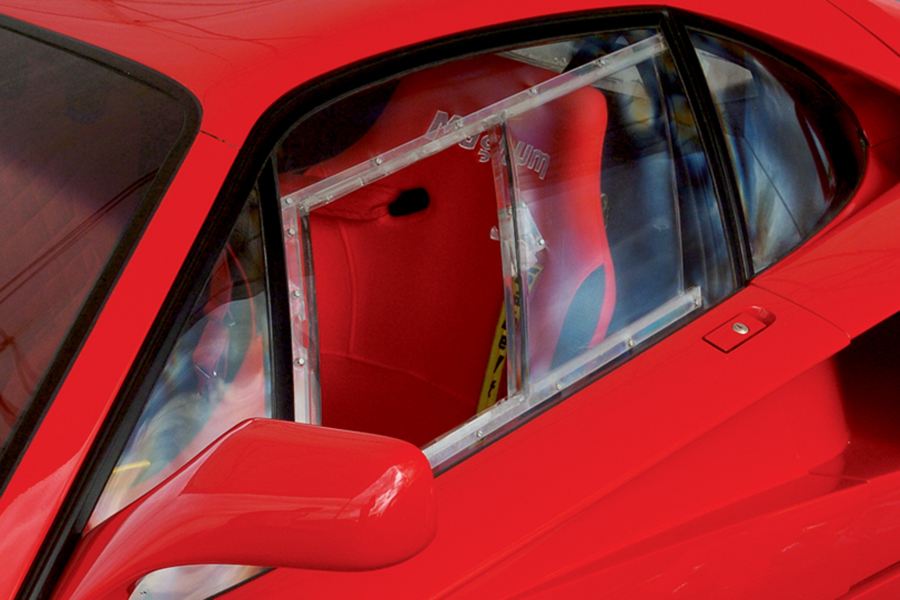 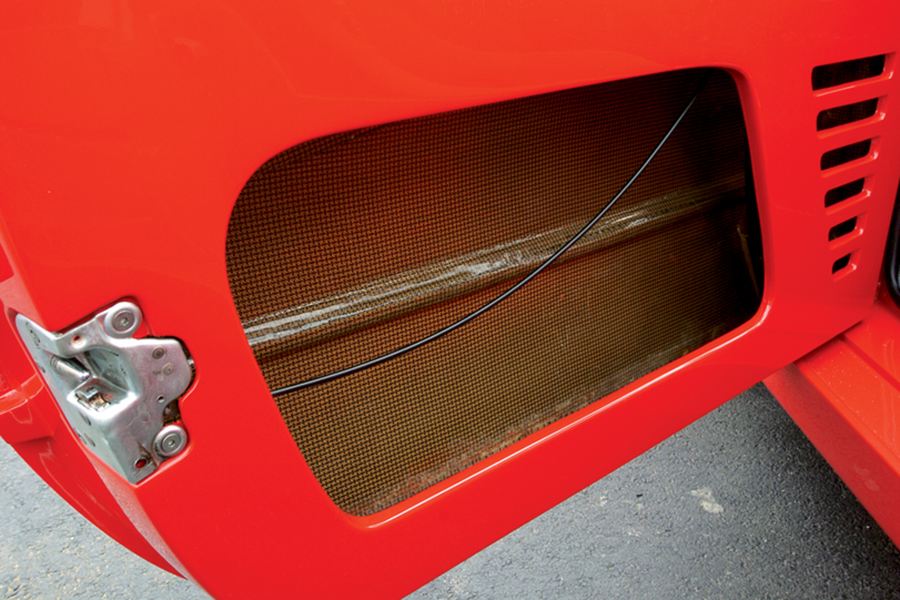 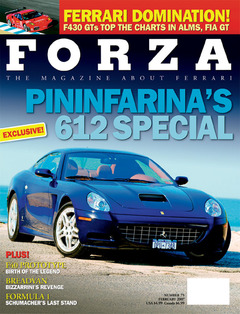