In 1967, Ferrari upended decades of tradition with the Dino 206 GT. 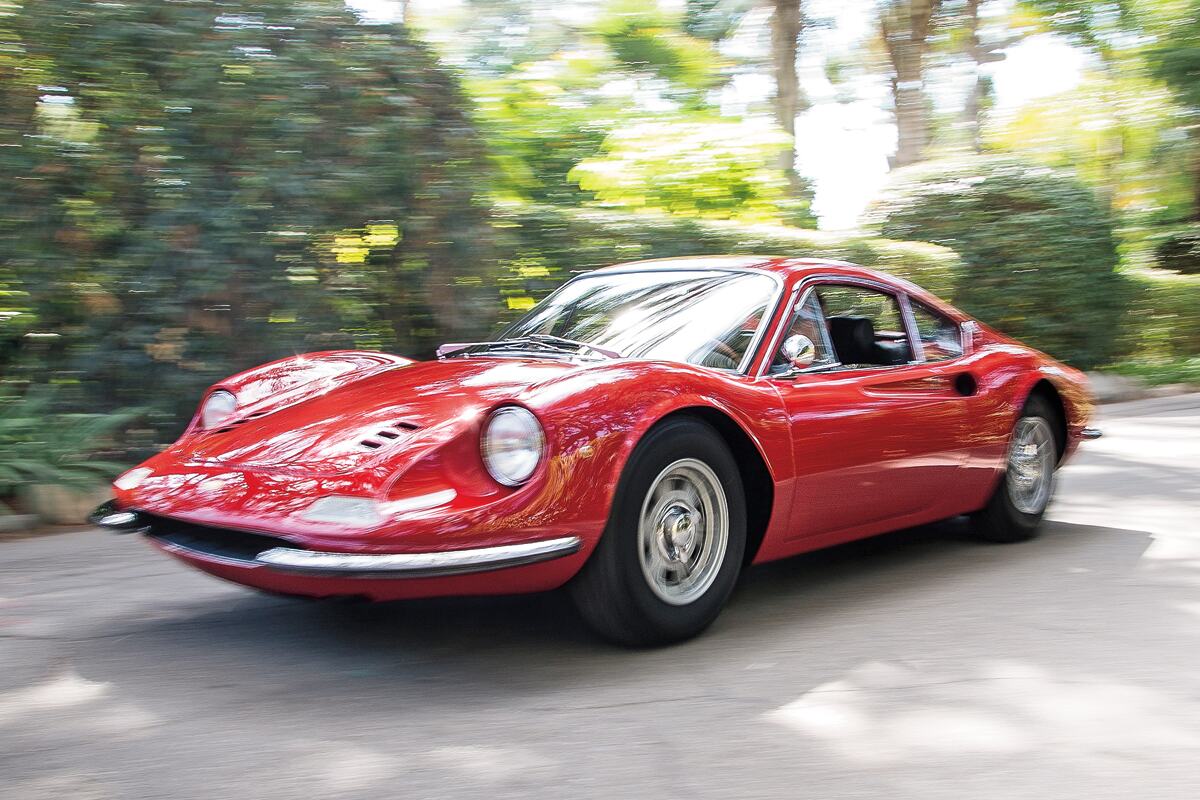 For its first 20 years, Ferrari built road cars to a standard formula, with the company’s defining V12 engine placed ahead of the driver. As Enzo himself famously said, the horse pulls the cart.

By the late 1950s, however, with mid-engine competitors changing the face of racing, Enzo Ferrari began to reconsider the placement of his horse. The Scuderia began fielding its own mid-engine race cars in the early ’60s, but Maranello’s road cars remained front-engine until the introduction of the model seen here.

Unlike every previous Ferrari road car, the 206 GT didn’t bear a V12, and the engine it did use sat behind the driver. Most radical of all, perhaps, it wasn’t even a Ferrari; it was a Dino.

The Dino name comes from Enzo Ferrari’s first son, Alfredo, who was better known as Alfredino (“little Alfredo”) or just Dino. Born in 1932, the young Ferrari took an active interest in the goings-on at his father’s workshops. He was particularly fascinated by engines, and reportedly helped to convince Enzo that V6s and V8s would prove competitive in racing. 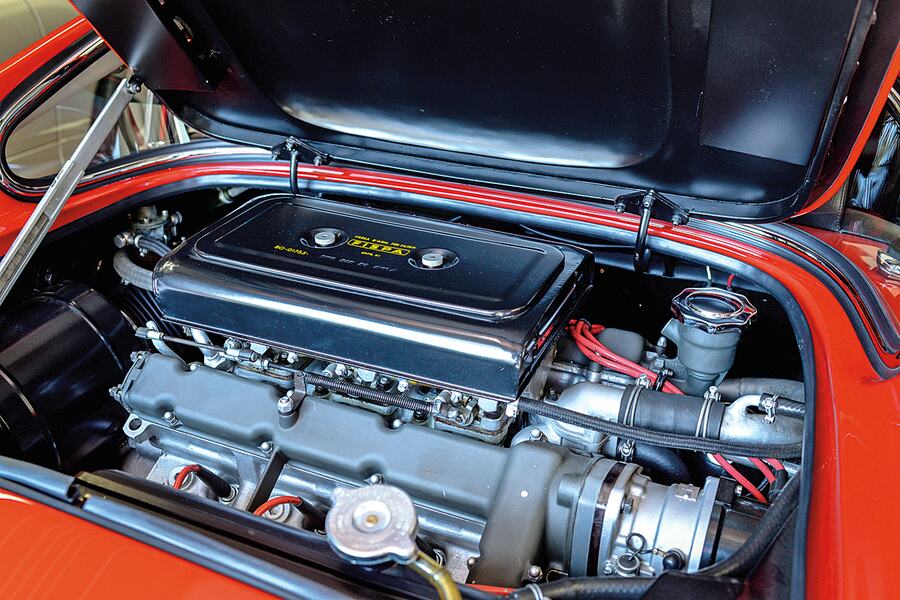 Dino studied engineering and economics in college. Then, in the early 1950s, was diagnosed with Duchenne muscular dystrophy—a virtually untreatable disease at the time. While the young Ferrari collaborated with engineer Vittorio Jano on the creation of an exotic 65° V6, sadly he never saw the engine completed. Dino passed away on June 30, 1956, and the engine that Enzo named in his honor didn’t make its competition debut until the following year.

Over time, the Dino V6 evolved significantly, being produced in a smorgasbord of displacements, cylinder head designs, and vee configurations. It proved a great success in several forms of racing, including powering Mike Hawthorn to the 1958 Formula 1 World Championship.

Then, in the 1960s, new Formula 2 rules mandated that the previously low-volume, hand-built V6 would have to be produced in meaningful numbers in order to homologate it. Enzo Ferrari had no plans for anything remotely resembling mass production. Fortunately, Fiat was interested in just such an engine for the Bertone-designed Fiat Dino Coupe and Pininfarina-penned Fiat Dino Spider, which were introduced in 1966 powered by 2-liter V6s.

Ferrari also saw the value of the V6 as a road-going engine. Enzo envisioned expanding his offerings with a less expensive, non-V12 sports car. Even though said car would be produced by Ferrari, carry many Ferrari components and traits, and be sold through Ferrari dealers, the cars wouldn’t wear the Prancing Horse badge. Instead, they were dubbed Dinos, the lettering a stylized logotype of Alfredino Ferrari’s signature. 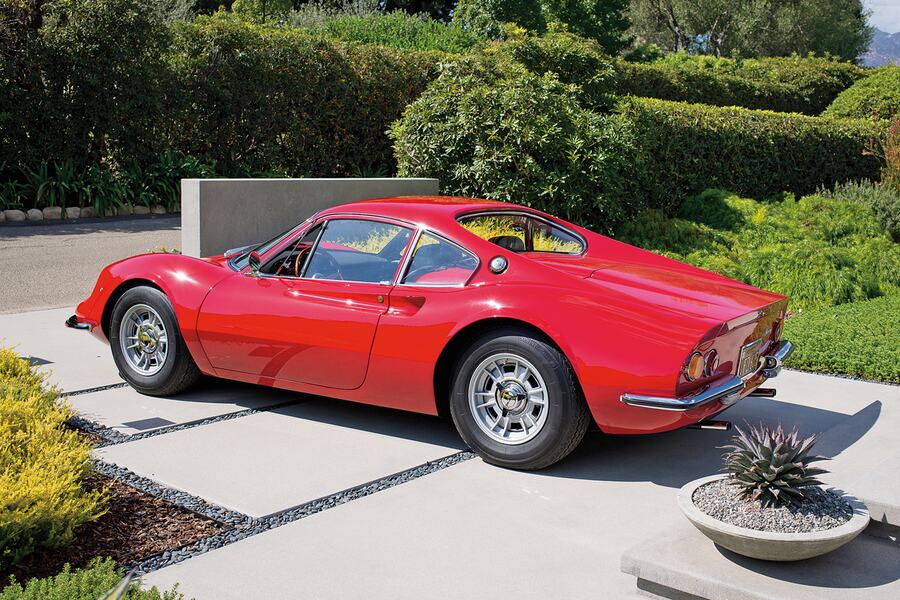 The design job was given to Pininfarina, and assigned to studio chief Aldo Brovarone and a young Leonardo Fioravanti. While the V6 had been raced in a variety of front-engine cars, it was decided that a sinewy, mid-engine platform would be proper for Ferrari’s Dino, leaving the front-engine V6 road cars to Fiat.

The dazzling Dino 206 GT came to market for the 1967 model year. Low and elegant and offered only as a left-hand-drive berlinetta, the new model looked every bit a Ferrari. Nicely balanced front to back, the rear deck and roof area boasted an elegantly sporty wraparound rear window treatment.

Exterior adornment and jewelry were kept to a tasteful minimum, with clear-eyed single headlights up front and curved chrome bumpers at each corner. Dainty looking “flipper”-style handles perched at the top of the doors’ trailing edge, just at window height. The few necessary intake and exhaust grilles gave a sporty look without being overly aggressive. The sinuously curvy coachwork was rendered in aluminum.

In the 206 GT, the V6 produced 178 horsepower and redlined at a very racy 8,000 rpm. Ferrari’s own five-speed manual gearbox sent power to the rear wheels—beautiful Cromodora knock-offs made from magnesium. Suspension was unequal length A-arms front and rear, with disc brakes at each corner. Sports car stuff all around, but unfortunately, since the Dino was never officially imported into the United States, it remained a mostly European treat. 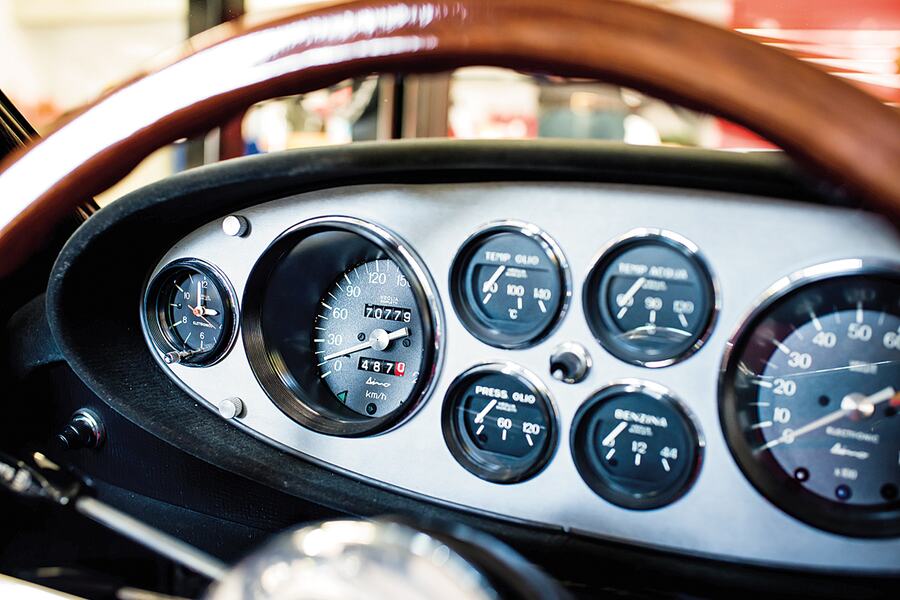 Despite its age, Hein’s 206 has enjoyed a short ownership chain. Initially sold in Italy, it remained in its home country through 1977, when it moved to Los Angeles for a decade. In 1987 it was sold to noted Japanese collector Isao Kobayashi and moved to Osaka. It returned to the U.S. in 2013. purchased by an unnamed private collector in Chicago, from whom Santa Barbara resident Hein bought it.

Hein swears his days of ground-up, hands-on restorations are over. He now prefers to find examples already in premium condition, then hone and sort them to his standards. This Dino is one such example—a previously restored, numbers-matching car sitting just right on its original wheels and proper 185/70R14 tires (originally Michelin X, now Dutch Vredestein rubber).

Hein has fiddled, fettled, and coaxed s/n 00198 to a state of virtual perfection. But although it’s absolute show quality—in fact, it won its class at Pebble Beach a few years ago—it’s no garage queen. 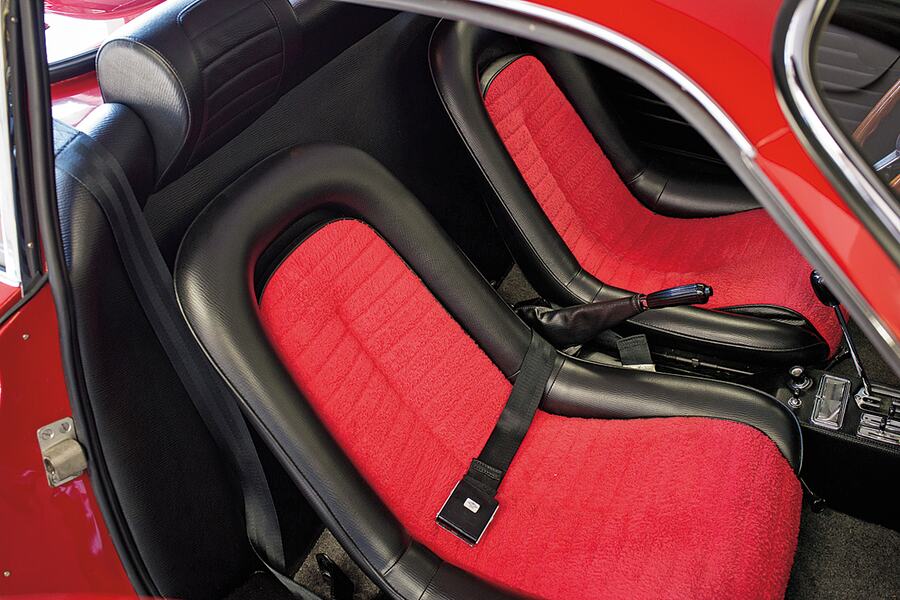 “All of my cars are sorted and meant to be driven, and I drive them, including this one,” notes Hein, who then goes one better and offers me the key.

The 206 sits low, as it should, and entry is one of those “line up and fall gracefully” moves. (Getting out gracefully, on the other hand, proves to be an oxymoron.) Once inside, I discover it’s quite comfy, with adequate legroom, all controls at hand, and good visibility, even I can’t see the lowest part of the Dino’s nose. The seats are comfy and supportive, if not overtly bolstered.

There’s no wood trim or any other “traditional” luxury car trappings. This is a sports car, and the handsome, well-trimmed cabin is built for the business of driving.

The cockpit also boasts a few hints of the Dino’s Maranello roots. While the center boss on the gorgeous wood-rimmed steering wheel wears the stylized Dino badge, the wheel itself has appeared in other Ferraris. Additionally, while the gauges themselves are slightly different to account for the V6 engine, the ovoid instrument binnacle is the same piece found in the Daytona. A few other ancillary controls also come from the Ferrari/Fiat parts bin. 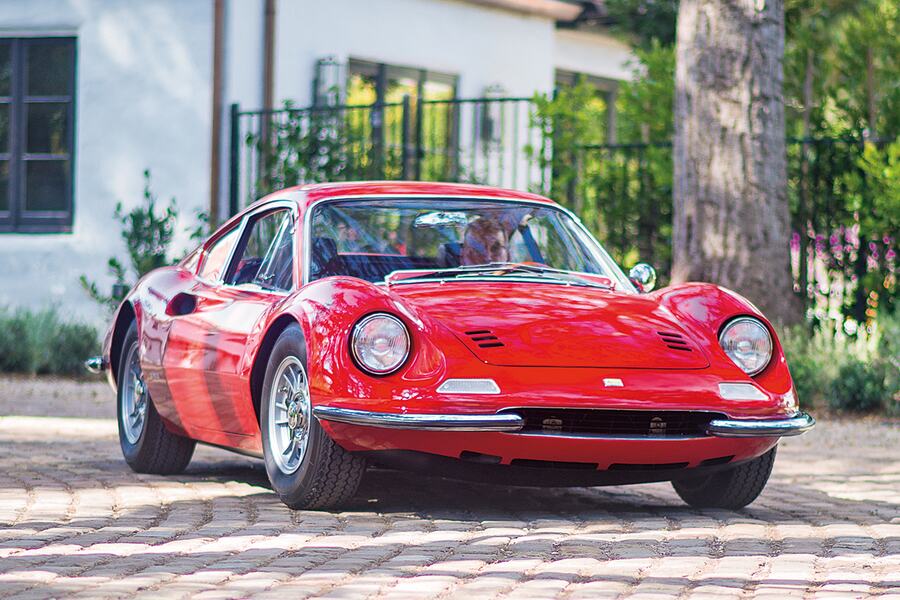 The triple Weber-carbed V6 requires minimal priming, pumping, or cranking to fire. It barks and snorts with aggressively supple purpose through its small-diameter, single-wall, dual twin exhaust pipes. The clutch dips smoothly, neither stiff nor overly heavy, and it takes only minimal revs to pull away cleanly.

Despite the engine’s modest displacement, there’s more low and midrange torque than I expected. Between 3,000 and 5,000 rpm, the V6 pulls strongly and cleanly, with no spitting back through the carbs, bucking, or flat spots. Hein’s car does pack uprated cams, which likely help out as the engine spins past 5,000 rpm, the sounds coming from behind simply symphonic.

Gear ratios feel ideally matched to the engine’s power habits, with a ratio for every occasion and meaningful power from 2,500 rpm to redline. The gated five-speed dogleg gearbox shifts crisply with no clonks or undue notchiness, responding wonderfully to a firm, precise hand.

In an era of aggressive ultra-low-profile rolling stock, there’s much to appreciate about the Dino’s tall-sidewall tires. The car rides beautifully—even though 70-series rubber was pretty racy on a street car for the day—and there’s a distinct lack of road noise and rumble. 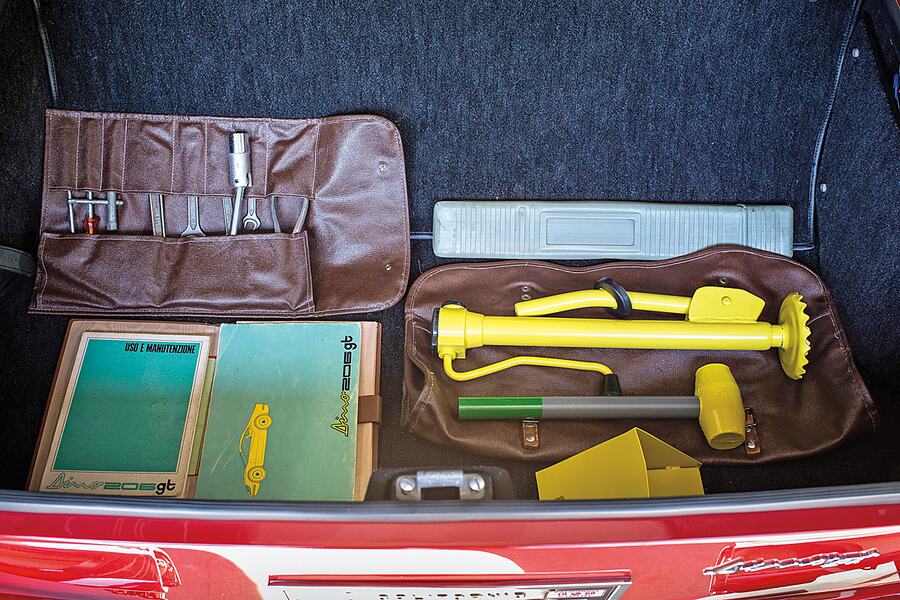 At the same time, the manual rack and pinion steering is crisp and responsive, and the little red racer goes where I point it without having a fit over road grooves, bumps, or potholes. There’s serious conversation between driver and steering, and I quickly become comfortable with it.

All in all, the Dino 206 GT is vice free, compelling, decidedly sporty, and enjoyable to a fault. It doesn’t pack the big bag of power that the larger V12 models of the era boast, but its balance is superlative, and it wants to be driven.

After the very limited run of virtually hand-built alloy-bodied 206 GTs, Ferrari elected to elevate the Dino to a larger stage, including official importation into the North American market. This brought along a major construction shift to steel bodywork, emissions and safety gear the 206 didn’t have to deal with, and a healthy displacement bump to 2.4 liters.

The new-for-1970 Dino 246 GT also lost its aluminum engine block and elegant center-lock knock-off wheels, and grew in almost every way: slightly more power and torque, 200 extra pounds, and a 2.4-inch longer wheelbase. The targa-topped 246 GTS arrived in 1972, and the following year the Bertone-bodied, V8-powered 308 GT4 again bore Dino nameplate. Beginning in 1976, however, it was replaced by the famous Prancing Horse.

While the name was gone, its legacy lived on. In the time since, Ferrari’s V8s and now V6s have come to both outnumber and outpower its magnificent V12, which today lives on more for tradition, sound, and exclusivity than outright performance. And this change began all those years ago with a talented young man, an inspired engine design, and a beautiful sports car, all named Dino. 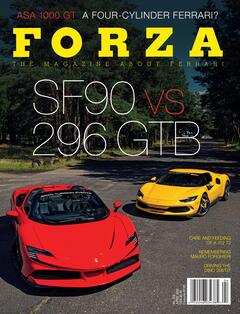