There’s no cheaper way to get into a modern V12 Ferrari—and it even has a back seat. 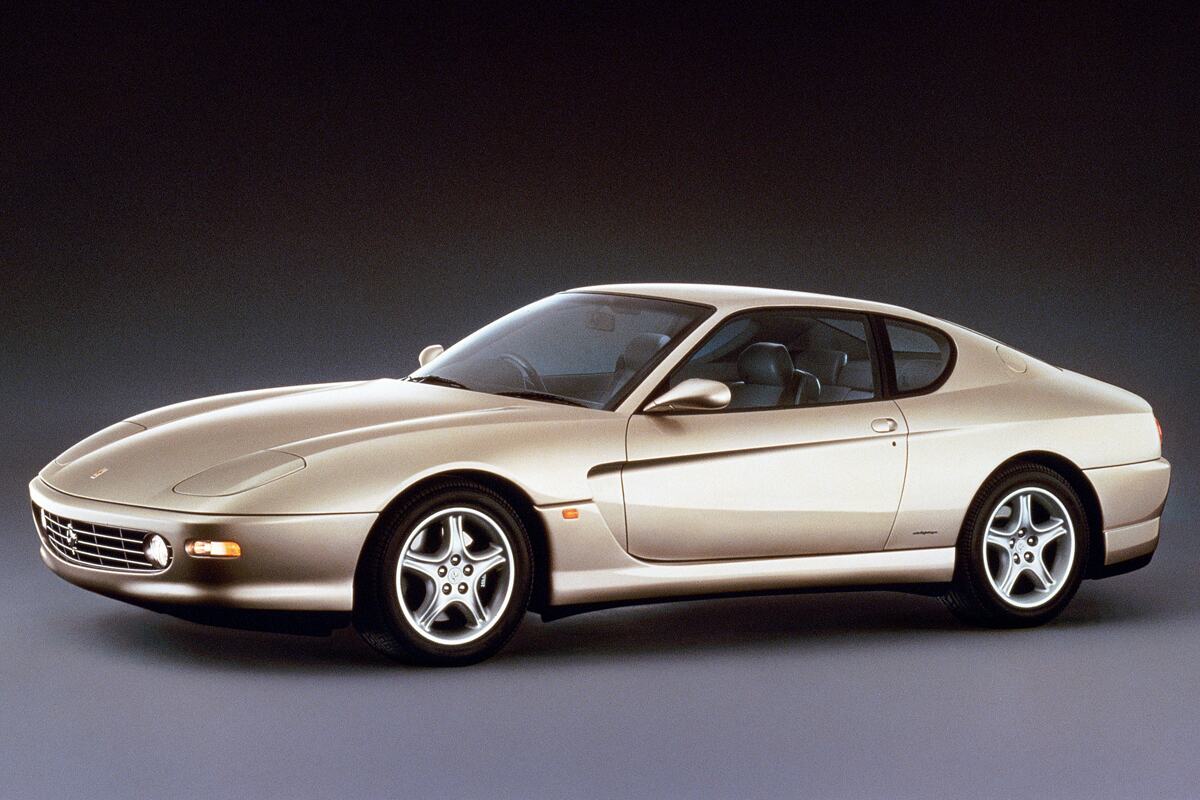 The recently revealed Purosangue may be the first four-door four-seat Ferrari, but the marque’s two-door 2+2 “family cars” have long been part of its stable. While they are neither as fast nor sporting nor visually appealing as Maranello’s two-seaters, they are just as loved by owners; the 250 GTE, Ferrari’s first 2+2, was by far the most prolific model of the early 1960s.

By the late 1980s, however, enthusiasm had mostly evaporated for the company’s then-current 2+2, the 412, which had been in production in one form or another since 1972. A new car was sorely needed, and in late 1992 Ferrari unveiled the sleek, modern, all-new 456 GT.

The most obvious change from old to new was the understated, flowing aluminum bodywork, which owed as much to Pininfarina’s designers as the wind tunnel. As a result of the latter, the 456 received Ferrari’s first road-going active aerodynamic device: a small spoiler that deployed from underneath the rear bumper.

While the 456 was still built on a traditional steel frame, its underpinnings were anything but typical. Speed-sensitive power steering was used for the first time, while electrically adjustable shock absorbers made their first appearance in the V12 lineup.

The 5.5-liter V12 was the first to feature a 65° vee, an angle between cylinder banks that’s been used ever since. The engine produced 442 hp and 398 lb-ft of torque, output sufficient to launch the 3,726-pound car to 60 mph in a tick over 5 seconds. Top speed was 186 mph, and that terminal velocity could be reached in comfort thanks to the 456’s luxurious cabin. 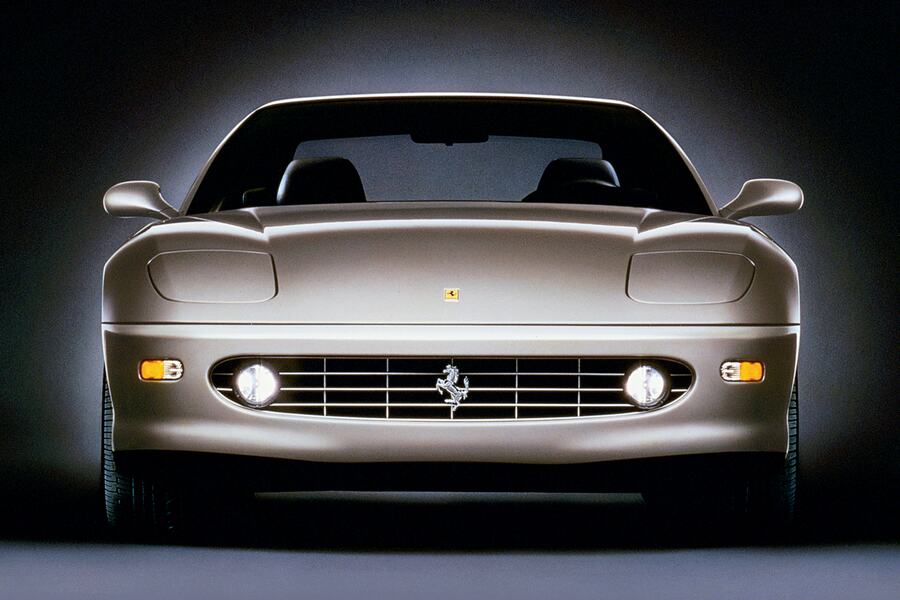 The powerful and flexible V12 was paired with Ferrari’s first six-speed manual transmission when the 456 arrived in the U.S. in 1994. In ’97, however, Ferrari introduced the GTA variant, which featured an electronically controlled four-speed automatic built by Ricardo around General Motors’ internals.

In 1998, the updated 456M (for Modificata) debuted. The M received a light face-lift—the most noticeable changes were the deletion of hood vents in the now carbon-fiber hood and foglights set in the grille rather than the bumper—and a much more modern-feeling interior. While no more powerful on paper than the original car, the M felt faster in the real world. It was also more refined and better handling than its predecessor, thanks to the introduction of traction control and revised shock absorbers.

The 456 and 456M were essentially four-seat supercars when new. Today, these machines have the added bonus of being great buys; there’s no cheaper way to get into one of Maranello’s modern V12s. For anyone who wants a refined yet seriously fast Ferrari with room for the kids, check out the 456.

When introduced in 1992, the 456 GT was the first of the Luca di Montezemolo-era V12 Ferraris, a faster and more luxurious replacement for the earlier 400 and 412. Sales were slow due to the new car’s bland styling, a $200,000+ window sticker, and a reputation for serious quality issues, ranging from poorly sealing door windows to multiple electrical gremlins. That reputation was well earned, with extensive warranty repairs forcing Ferrari to pause production for the ’96 model year.

Production resumed for the ’97 model year, when the introduction of the automatic transmission-equipped GTA helped revitalize sales. The arrival of the improved 456M (and M GTA) in 1998 also helped move cars, although M sales never reached the level of the original. 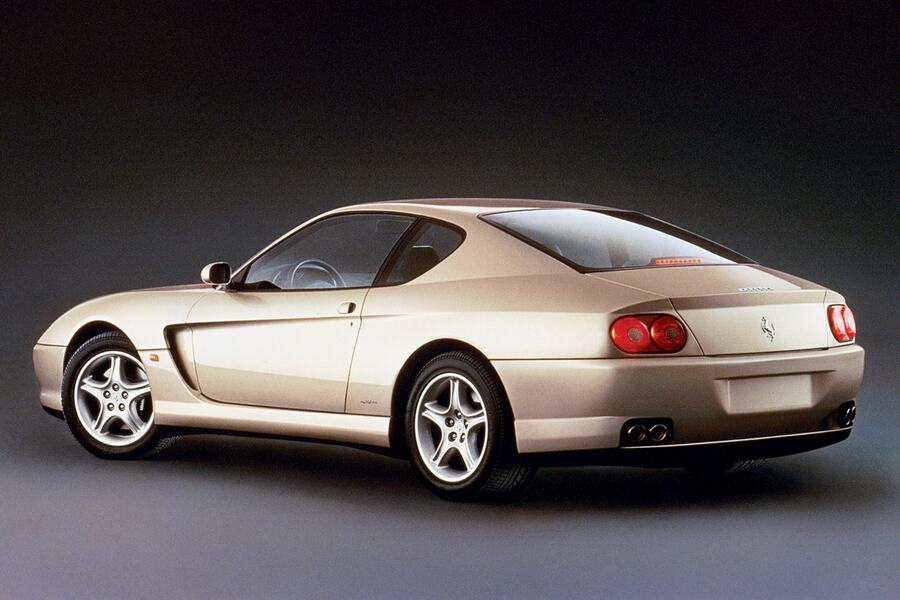 Happily for today’s buyer, these low build numbers haven’t translated into high prices. The 456 and 456M are the least-expensive modern V12 Ferraris on the market, and they’re fully depreciated from their $200,000-250,000 base prices when new.

Three-pedal cars are currently all the rage, so six-speed models, which offer much better performance on the street, sell for a substantial premium over the four-speed automatics. As usual, “high-mileage” cars cost significantly less than lower-mileage ones, but it’s rare to come across a 456 that doesn’t have at least 10,000 miles on the clock, with 15,000-20,000 miles being common and 30,000-40,000 miles not unusual. Higher mileage shouldn’t necessarily be a deterrent to buying a 456, as most of these cars’ problem areas are influenced by time, not usage. —Michael Sheehan

These prices are for cars in good-to-great condition as of November 2022. 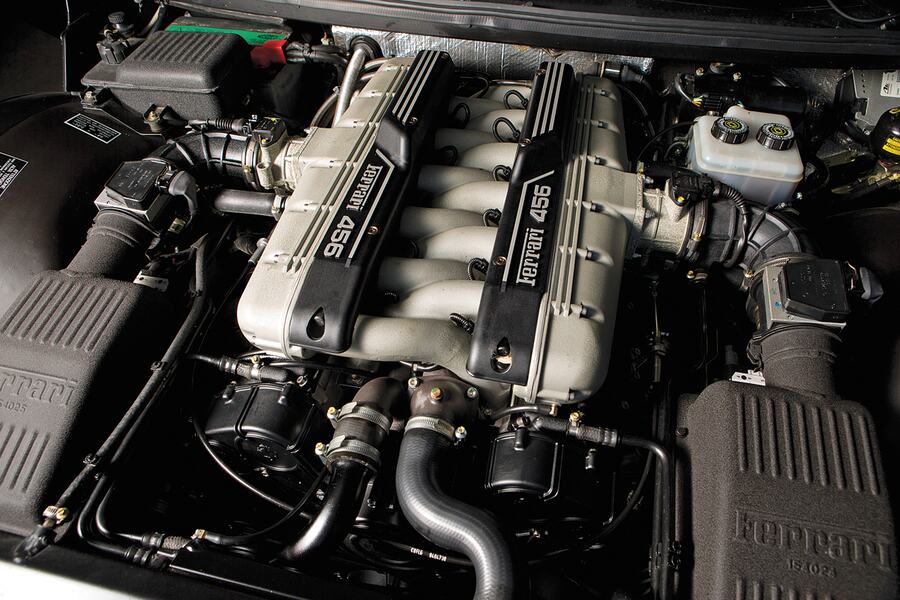 There’s a lot to like about the 456. It’s affordable, it’s fast, it’s comfortable, and it offers enough room in back for small humans, dogs, and/or luggage that won’t fit in the trunk. Unfortunately, this luxurious model was plagued with problems when new, and some of those problems remain challenges today.

The biggest issue likely relates to the door windows, which suffer from suspect window regulators and notoriously poorly designed window seals. Ferrari redesigned the latter, and the updated seals offer a significant improvement, but it wasn’t until the 456M that most of the regulator-related issues were resolved.

Also updated during the 456’s lifespan were its fast-wearing motor mounts. If the mounts wear enough to allow the engine to rest on the speed-sensitive steering rack (itself a potentially problematic item), the oil-pressure sending unit can get snapped off by the front anti-roll bar, leading to an abrupt loss of engine oil. This is as bad a scenario as it sounds, so make sure your mechanic checks the mounts at every service and fits the newer version when it’s time for replacement.

If the V12’s valve guides (the same as used in the F355) wear out, make sure to replace them with the factory’s updated steel guides. Expect a five-figure repair bill if this happens, since the heads need to be pulled off the block.

Less expensive but more common are disintegrating rubber components inside the fuel tank. The 456’s fuel pumps sit on rubber mounts, which disintegrate over time thanks to today’s gasoline formulations. The bigger concern is that these bits of rubber can get sucked into the pumps, lines, and even the fuel injectors, and removing and cleaning the entire fuel system is a long and laborious process. To date, there are no non-disintegrating replacement mounts available. 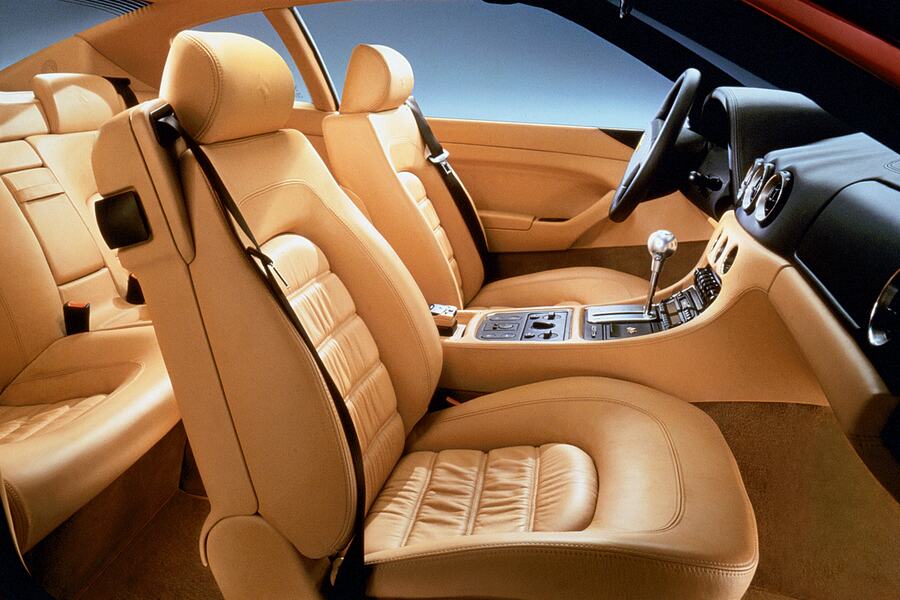 The 456’s combination of high performance and hefty curb weight means that the front tires and front brakes are usually good for only about 10,000 miles. That’s also about the time the self-leveling rear shocks will begin to leak. Factory replacements are very expensive, but Delta Vee Motorsports will rebuild the originals for far less.

While on the topic of wearing out, the 456’s seat potentiometers are problematic. Replacements from the factory are expensive, but the same items from the Jaguar parts catalog cost much less.

Thanks to the large windshield and rear hatch glass, the dashboard and rear package tray get baked by the sun if the car is left uncovered. This will eventually lead to the leather shrinking. Removing, recovering, and reinstalling the dash and package tray will cost many thousands of dollars.

Like all Ferraris of its era, the 456 features Ferrari’s infamous “sticky” interior controls. New parts are hard to find (and sometimes come out of the box already sticky), but the originals can be refurbished at a reasonable price by various companies, most prominently Sticky No More.

When it comes to regular servicing, the 456’s V12 was the last to have solid lifters (which must be checked and adjusted during a cam-belt service) and the first to utilize a timing belt (which should be replaced every five years or 30,000 miles). An annual fluid-change-and-safety inspection will usually cost around $1,000-2,000, while a major service typically runs $6,000-8,000 on a stick-shift car. Prices are higher for automatic-equipped cars, around $8,000-10,000, since the rear bumper, transmission cooler, and other components must be removed during the process. A major service is often a good time to replace the factory’s low-quality coolant hoses (Scuderia Rampante offers high-quality replacements) and intake gaskets (updated factory items are available). —Michael Sheehan 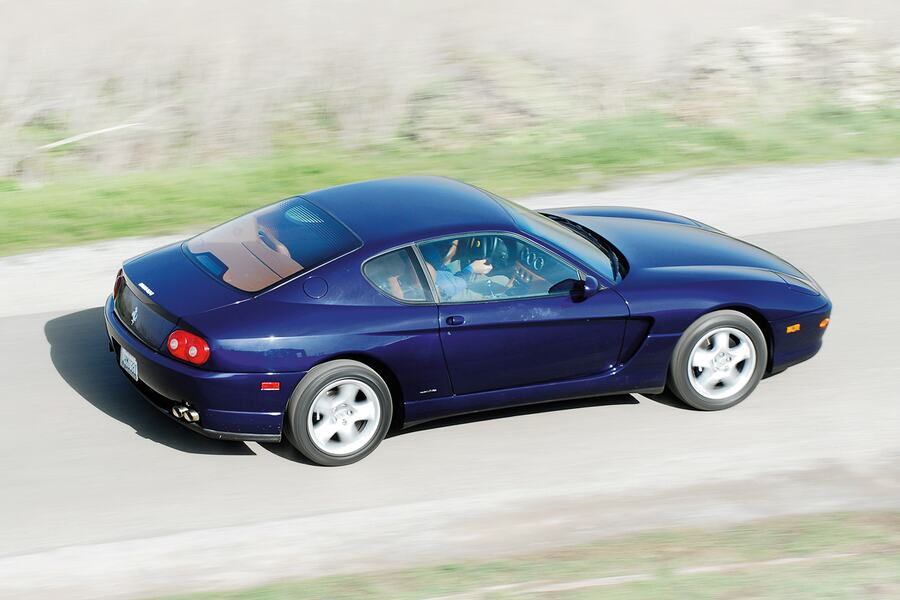 The 456 and 456M are less sporting than their 550/575M stablemates, but they offer a much more relaxed driving experience. Here’s some of what we’ve said about these four-seat supercars.

The 456M turns in smoothly and is very nimble for its size, but I’m always aware of its weight as the pace quickens. The car leans a lot, too, even in Sport mode, though this doesn’t seem to affect its overall grip; more than once, I exit a corner only to realize I could have taken it faster.

The 456 is no canyon carver [compared to the 550 Maranello and F355], but as soon as the road opens up a bit the big Ferrari is back in its element: planted, powerful, quiet, and extremely comfortable. Even if it didn’t have back seats, this is definitely the car of the three to take on a road trip; the 456 delivers a sense of effortlessness the other two can’t match, simply eating up the miles.
—“Veni, Vidi, Vici,” FORZA #85

As inviting as the 456M’s interior is, it has one shortcoming compared to the 456 GT: It doesn’t fit taller, longer-legged drivers as well as the earlier car. I’m six-foot-three, and while the headroom is more than adequate, the M’s seat rails would have to be moved rearward for someone my size to seriously consider owning one. The steering wheel, too, is closer than it should be.

The character of the M’s engine is different from that of the 456 GT. Although that car was also very fast, this feels a good deal quicker, and it has an aural excitement the earlier model lacks. You hear this engine, and its smooth growl under full throttle is amazing.
—“The ‘Practical’ Ferrari,” FORZA #53

The 65° V12 responds crisply to the accelerator’s urge over 4,000 rpm, like a grissini snapping between your teeth. But, unlike the sportier and lighter 550 Maranello, there’s a smooth velvety edge to the power delivery. The 456M might not have the hearty aggression of its younger sibling, but its performance envelope is so far inside true supercar territory that it makes no difference.

This big Ferrari has huge grip and generates addictive levels of sideways g. But when you feel the little black box working its magic during serious high-speed sweepers, you instinctively feel grateful for that margin of safety the ASR gives.

In Sport mode, body (and there’s plenty of it, at 3,726 lbs.) control is exemplary through undulating switchbacks, the chassis exquisitely damped and settling fluidly into corners. Fierce braking into bends still shows a marked tendency for the nose to dive, but the front end now feels altogether more of a cohesive whole, stubbornly tracking the steering wheel’s chosen line.
—“With the 456M to Portofino,” FORZA #13

I stop the 456 GT and slip the gear lever into third. Keeping the revs in the neighborhood of 1,500 rpm and feathering the clutch ever so carefully, I ease her off and she gets up and goes without complaining at all, gathering a considerable head of steam as she clears 100 mph in the same gear! Such a test provides proof of the astounding flexibility of what is likely the most refined engine ever to emanate from Maranello.

While traveling at triple-digit speeds, the composure of the chassis, suspension, and powerplant is awe-inspiring. The car doesn’t even break a sweat.
—“The Seduction,” FORZA #3 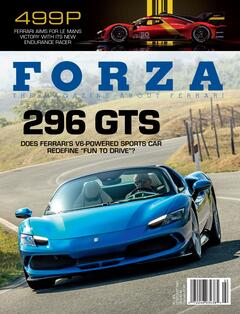