What do you get when you combine a LaFerrari Aperta, an 812 Competizione, and a 330 P4? The stunning Daytona SP3. 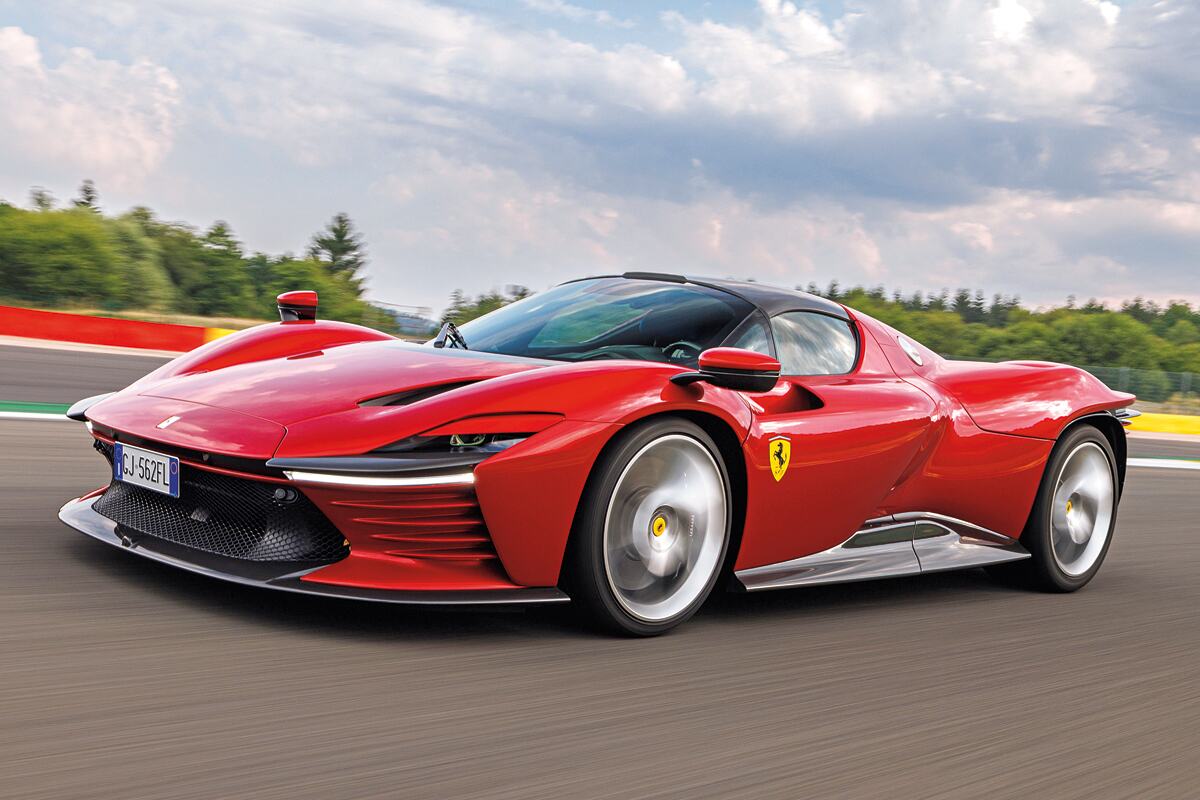 In the time since it was revealed, the Daytona SP3 has created riots at the Goodwood Festival of Speed and then the Le Mans Classic. Today, three examples of Ferrari’s third Icona model (after the Monza SP1 and SP2) have arrived at the Spa-Francorchamps circuit, just before the famous 24-hour event. They are not here to race, however, instead simply striking a pose on the mythical racetrack before I’m let loose on public roads.

The development of this ambitious project started in mid-2019 and followed the same constraints (i.e., time, fine tuning) as for a model in the regular range. However, production is limited to just 599 examples and carbon fiber is ubiquitous: the chassis, bodywork, and interior trim are all formed from the composite material. This partly explains the price, roughly $2 million, which means, above all, that I must keep my cool.

Our first meeting takes place in the gardens of the St. Gerlach castle in Limburg, The Netherlands. When engineer Gabriele Pritoni and test driver Lorenzo Vailati (one of Ferrari’s 12 in-house piloti) remove the SP3’s protective cover, my heart races and my eyes no longer know where to rest. Compared to photos or videos, the SP3’s effect in real life is infinitely more dramatic. 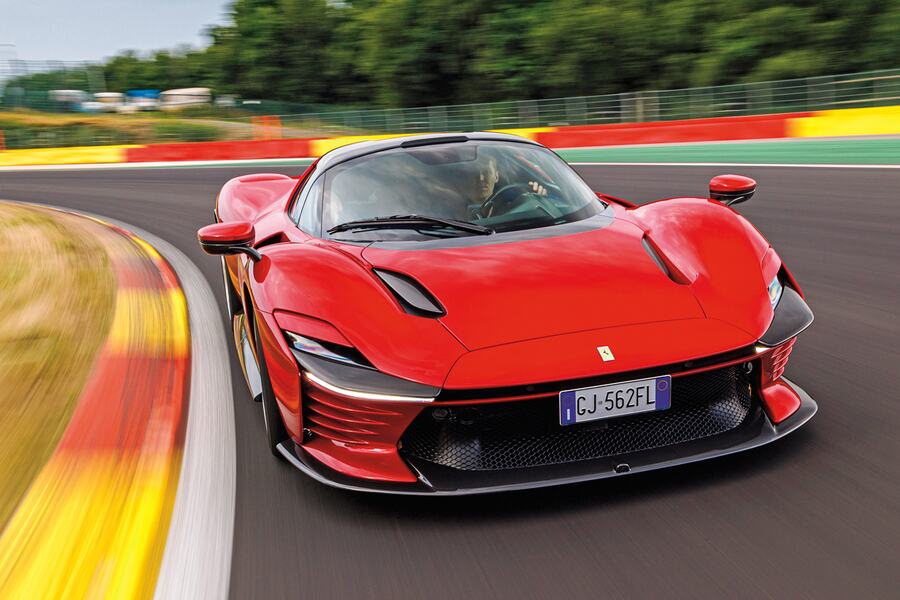 It’s a story of proportions. The Ferrari’s length is equivalent to that of a family station wagon, but it’s more than 6 feet, 9 inches wide before the mirrors and only 3 feet, 9 inches tall. With such measurements, this supercar looks like a UFO in the street. Its looks are magnetic; regardless of age or gender, passersby ask for permission to take photographs of what they think is a prototype.

The first things to catch my eye are the curvaceous fenders, especially the sensual and very rounded ones on the rear, an homage to the 330 P3 (and the evolutionary P3/4, P4, and 412 P which shone so brightly at the 24 Hours of Daytona in 1967). Although the SP3 isn’t as extreme as those sports prototypes of the ’60s, it retains their aura and stunning shapes. These curves contrast with the aggressiveness of the front and rear.

Amusingly, in a surprise reinterpretation of pop-up headlights of the 1980s, the SP3’s frowning eyes get bigger when the active “eyelids” rise above 50 mph or when the LED headlights are switched on. The car’s profile is punctuated with surprises, such as the fender-mounted mirrors, the wind tunnels hidden in the doors and shaped by the sills, and the enveloping windshield. 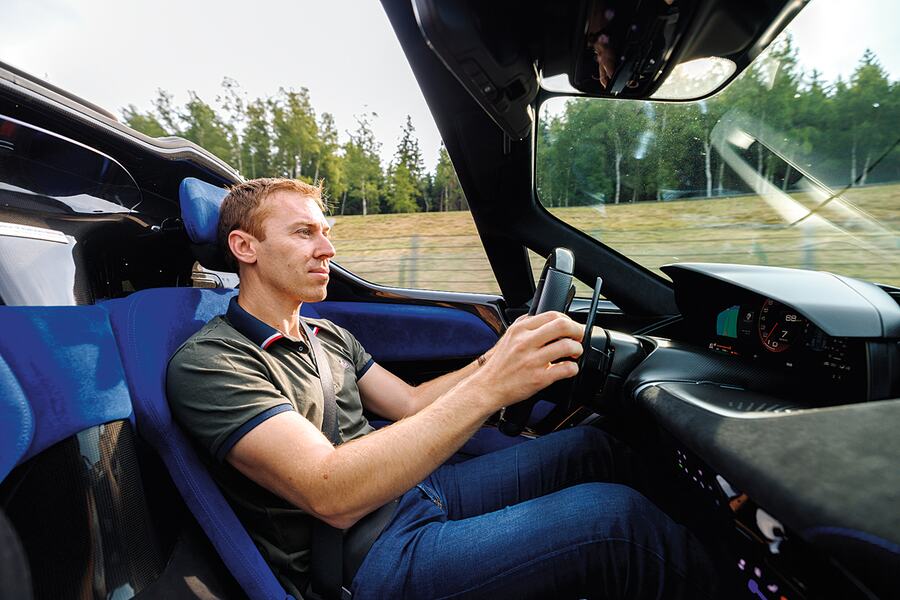 Ferrari’s aero work is subtle. The front end, for example, contains ducts leading to the brakes as well as the vertical vents in the hood. The bottom is punctuated with vortex generators. Two aero tunnels hide on the sides. Small flicks emerge under the headlights and atop the windshield to direct the airflow above the occupants when the roof is removed.

Yes—the Daytona is a targa, and its 20-pound carbon-fiber roof can be removed after unlocking five attachment points (four side, one central). After removal, the roof must be left in the garage, however, since there’s no room for it in the tiny front trunk, which is even smaller than the SF90’s. Ferrari supplies a stowable emergency roof in case of bad weather, but any lucky owner who wants to travel in his or her SP3 will be able to bring only the barest of essentials. 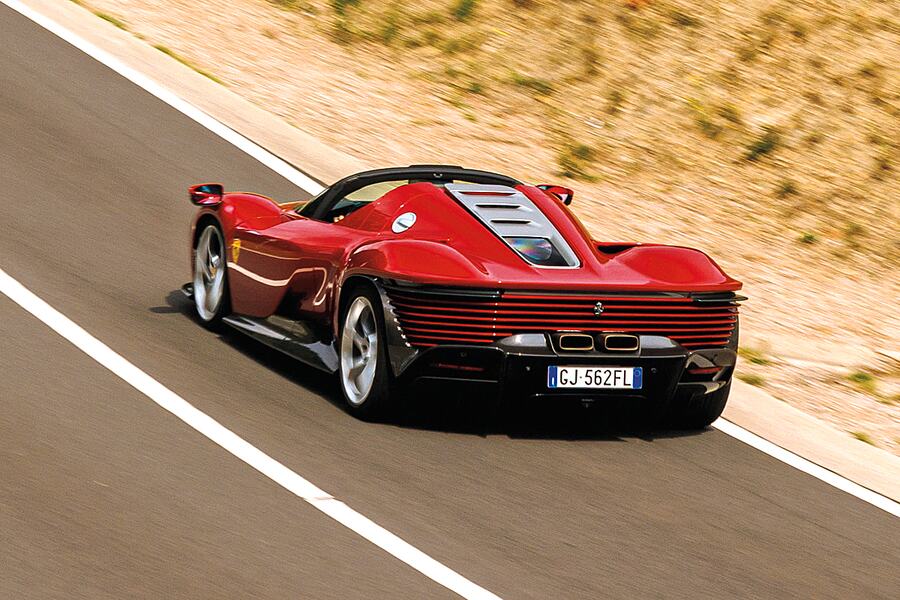 BEFORE DRIVING, I first have to locate the hidden handle that opens the spectacular scissor door. Then turn my back, let myself drop into the cockpit—avoiding the side skirts and windshield—and, once seated, pull in my legs. The padded seats are comfortable despite them being molded into the carbon-fiber tub. Adjustments are confined to the pedals and the steering wheel, which offer enough amplitude to find the ideal position, albeit one situated at ground level with my legs stretched out.

The sleek dashboard inherits the curved digital instrument panel of the SF90, Roma, and 296, as well as those cars’ faux shift gate and steering wheel with haptic pads. However, the latter is smaller, and its touch controls are less sensitive. The manettino offers five modes—Wet, Sport, Race, CT-Off, and ESC Off—while the bottom center of the wheel sports the command that fires the powder: Engine Start.

To the delight of both occupants and neighbors, the SP3’s V12 proclaims its presence loud and clear, just like in the good old days. Sound is only part of its appeal, as this 6.5-liter Tipo F140HC evolution of the 812 Competizione’s 830-hp F140HB is Maranello’s most powerful non-hybrid road-car engine ever. For mid-mounting, Ferrari shortened the intake and exhaust ducts, increasing efficiency and adding an extra 10 hp. 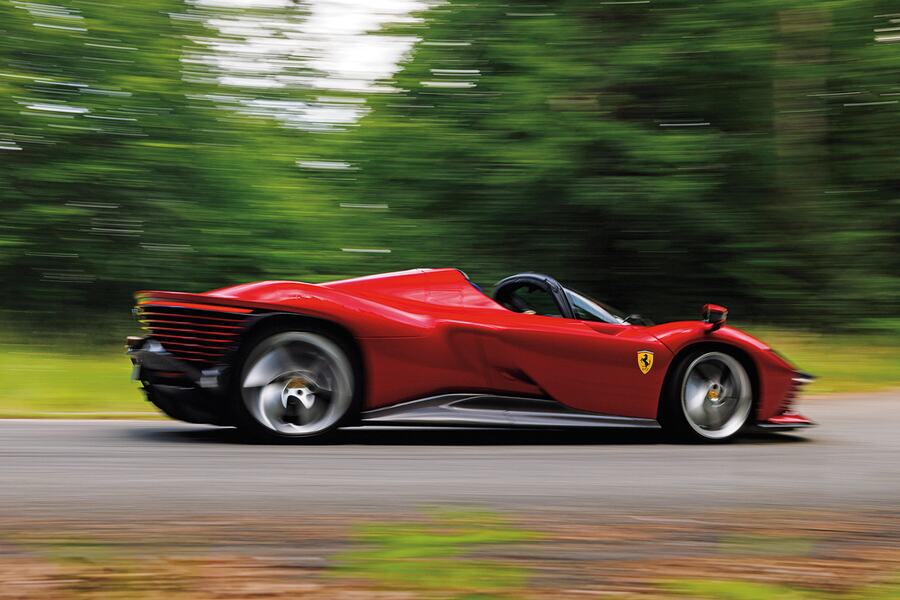 This V12 deserves a bow and a moment of contemplation after lifting the imposing one-piece rear deck, which is supported by extra-long struts. From the rear, the airflow turns 180° then rushes into the carbon-fiber air boxes, then to the carbon intake ducts which hide the famous red cylinder head covers. Engineer Pritoni tells me that, beyond aero and design, the most complex task during development came down to the engine’s sound.

“You have to meet noise standards around the world while working on the melody,” he explains. “The sound here comes from the suction, the intake, the crankshaft. It is intended to be mechanical, without artifice.”

To my ears, this V12 is a proper ode to the internal combustion engine, one distinguished by the purity of its notes, both bass and treble. The soundtrack is less bestial, more refined than that of the V12 in Lamborghini’s Aventador SVJ. The active exhaust shrieks a metallic, strident cry and a bark reminiscent of 1990s’ Formula 1 cars. 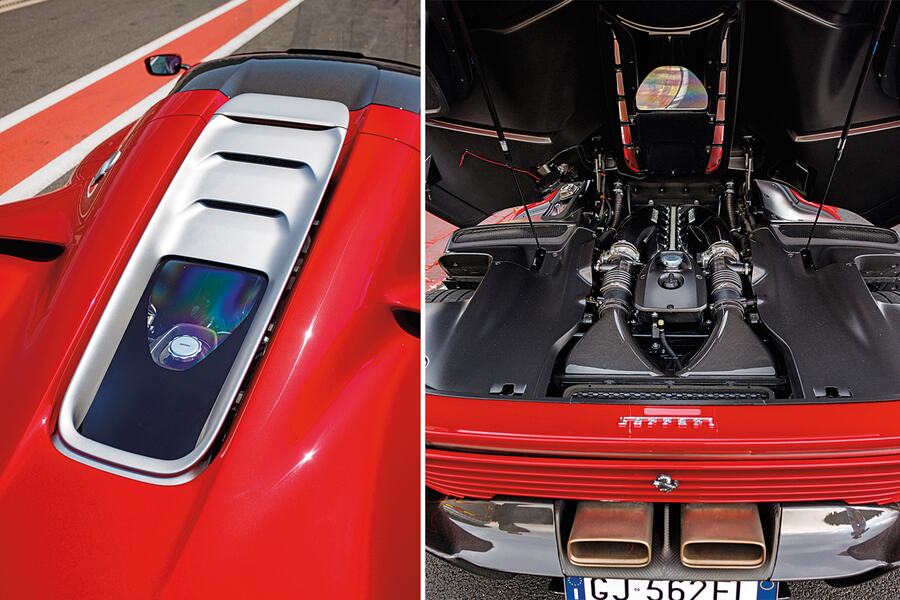 It’s an honor to attend this oh-so-exclusive concert, and the dual-clutch gearbox makes the score even more theatrical from Race mode on, generating explosions worthy of a handgun without tipping into aural melodrama.

“We don’t want a gasp when downshifting because we lose efficiency,” comments Pritoni.

This seven-speed transmission comes from the LaFerrari Aperta—as do the chassis, suspension, and brakes—but utilizes the gear and axle ratios of the Competizione. The casing limits vibrations while a new management system reduces shift times. The gearing itself is rather long, which allows the driver to take full advantage of the V12’s impressive flexibility. 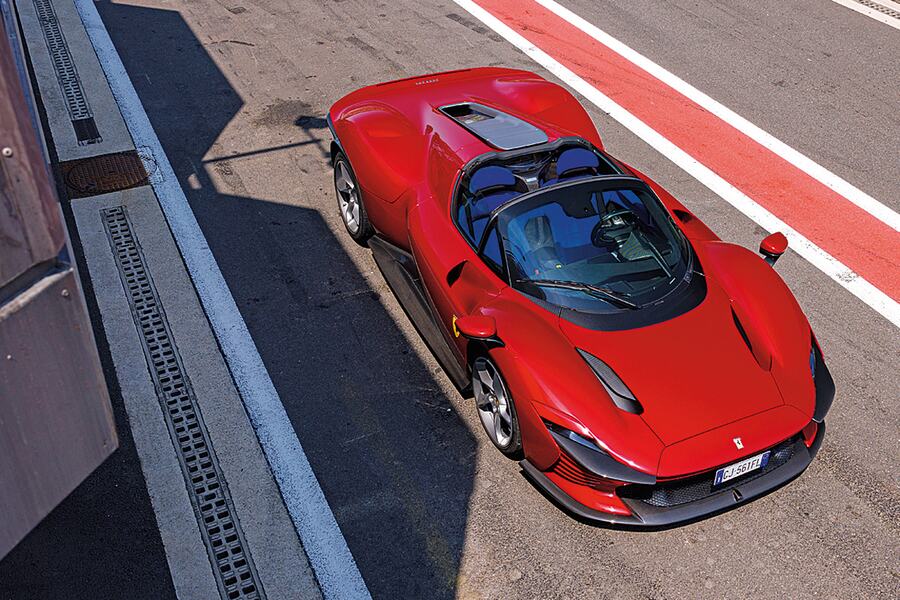 This monstrous engine pulls with determination from 2,000 rpm, changes face at 6,000 rpm, then soars to infinity and beyond—up to 9,500 rpm. Its colossal strength never descends into brutality, however, instead offering real finesse at the pedal. I soon discover I’m shifting gears too early, and realize I have to watch the tachometer to take full advantage of maximum power at 9,250 rpm or even grab the 9,500-rpm Grail without hitting the rev limiter.

The SP3’s Launch Control function is divine. Set the manettino to Sport mode or better, straighten the steering wheel, put a foot on the brake, select “L” in the gated “shifter,” then mash the accelerator. The revs stall at 3,100 rpm, then the supercar takes off with little slippage if its semi-slick tires are up to temperature. (In this case, unlike with the 812 Competizione, it was Pirelli that won the bet against Michelin and Bridgestone; these model-specific P Zero Corsas have been designed to withstand both wet conditions and fiery laps in the dry.) 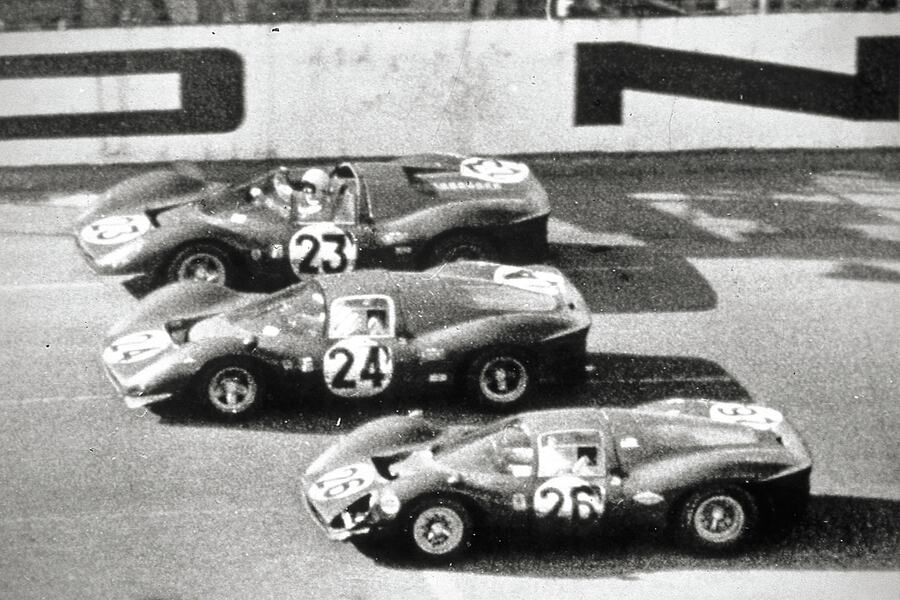 SP3’s swooping fenders and mirrors inspired by prototypes that famously swept podium at Daytona in 1967.

The Daytona’s strength seems inexhaustible, its stability unflustered. With the targa top removed, the Ferrari’s occupants have to deal with wind noise that forces raised voices above 80 mph—but this is a tiny concession compared to the emotional tsunami experienced. At legal speeds, turbulence is well channeled thanks to a transparent deflector placed obliquely between the headrests.

As intimidating as its speed is, the Daytona is amazingly easy to drive. The engineer confirms that this element was part of the specification, just as for models in the regular range. Watch its low nose (a lift system is standard) and broad shoulders, and the Ferrari tackles public roads without stress. It even switches off its mighty V12 when stationary, which gives everyone nearby a chance to appreciate the start-up roar when the traffic lights change.

THE SP3’S STRENGTHS extend far beyond its magical engine. Turn-in is extremely sharp—such a machine needs no rear-wheel steering, unlike the front-engine 812—and in the bends corrective braking becomes optional due to the front axle’s balance, grip, and communicative steering. The steering wheel helps the driver become one with the car by establishing a connection without filters. The power assist skillfully mixes variable hydraulics with a constant low electrical force to deliver an ideal compromise between consistency and pure feeling. In short, I’m quickly confident behind the wheel of this $2-million Ferrari, even on roads where it is sometimes difficult to pass.

Fortunately, in such situations I can always count on the brakes, which are easy to modulate and bite hard. Also reliable are the suspension settings, which are sufficient to control body movement while maintaining both ride quality and progressive reactions.

It’s not long before I’m tempted to turn off the driver’s aids and test the car’s balance. Scary? Maybe, but the game is worth it.

Driven hard, this Italian diva willingly drifts out of curves, gentle and easy despite the massive power. Between the quick steering, the grip, and the traction under acceleration, the SP3 manages to maintain an indecent pace. This leads me inexorably to a burning desire: to drive the Ferrari fully on the nearby Spa-Francorchamps racetrack.

Tragically, that’s not on the agenda. Instead, it’s time to slow my heartbeat, come to my senses, and return this artwork unscratched. But it’s a drive I won’t soon forget, the car having burned itself into my brain like a hot iron.

While the Daytona SP3’s power output won’t fluster today’s fastest hybrid and all-electric hypercars, in exchange for superfluous electricity it delivers a level of driving purity worthy of the brand’s grands crus. The connection between driver and car is complete, the ease of driving is disconcerting, and the balance and responsiveness are fantastic. The V12 completes the picture with its smoothness, strength, voice, and endless flexibility. This is Ferrari par excellence. 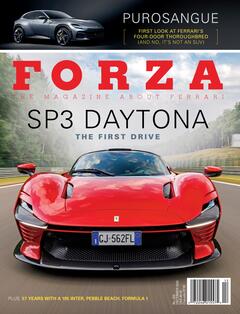