The 308 introduced Ferrari to a new worldwide audience and launched an era of V8-powered sports cars. 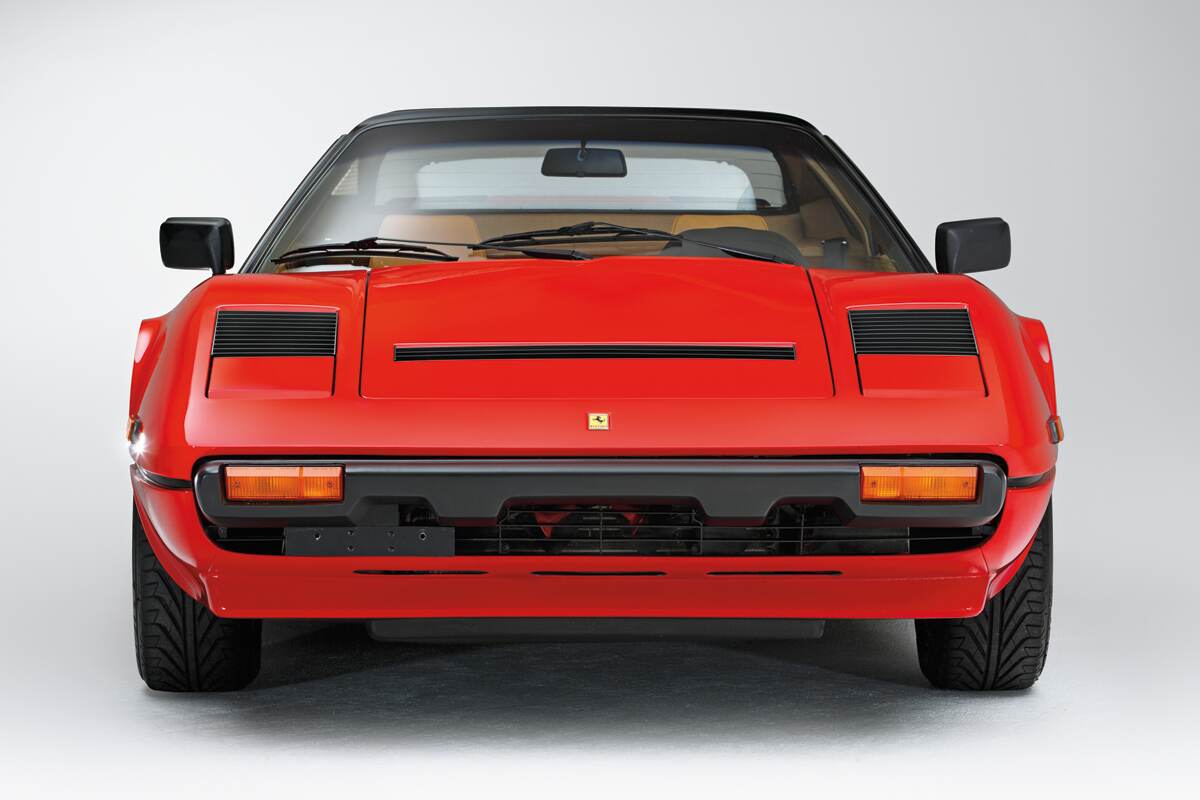 If ever there was a Ferrari that needed no introduction, it
is the 308 GTB/GTS. Other models are arguably more significant, more revered, or more beautiful, but it’s hard to think of another car that brought the mystique of Maranello to a wider audience. With its stunning looks, nimble handling, relative affordability, and “Magnum, P.I.” fame, the 308 may just be the best-known Ferrari ever.

Its story begins in the late 1960s, when Ferrari decided to expand its lineup with a series of less-expensive V6 and then V8-powered mid-engine models. Not wanting to dilute its brand, the company marketed these machines under the Dino nameplate. By ’75, however, Maranello was ready to slap the famous Prancing Horse badge on its “small” cars. The 308 GTB debuted at that year’s Geneva Auto Show, launching a five-decade run of two-seater V8 sports cars that likely defined the company more than its flagship 12-cylinders.

Mechanically, the 308 GTB broke little new ground. Its chassis, suspension, brakes, steering, and five-speed transaxle were based on that of the Dino 308 GT4, as was its carbureted two-valve 3-liter V8 engine, which produced 230 hp in U.S. trim. However, the new car’s handsome Pininfarina bodywork was innovative; it was made of lightweight fiberglass.

Ferrari’s first use of the composite material for body panels didn’t last long. By mid-1976, after 712 cars had been built, demand exceed the company’s production capabilities, forcing a switch to steel bodies that could be stamped out more quickly. In late 1977, Ferrari unveiled the targa-top GTS model, and sales ramped up even further—more than 2,185 (steel) GTBs were produced, along with 3,219 GTSs.

Late 1980 saw the introduction of the 308 GTBi and GTSi, which utilized fuel injection to help meet more stringent emissions requirements. As was the case with many cars of the era, however, horsepower fell precipitously, to just 205 ponies in U.S. trim. Production volume also fell, to 494 GTBi’s and 1,749 GTSi’s. 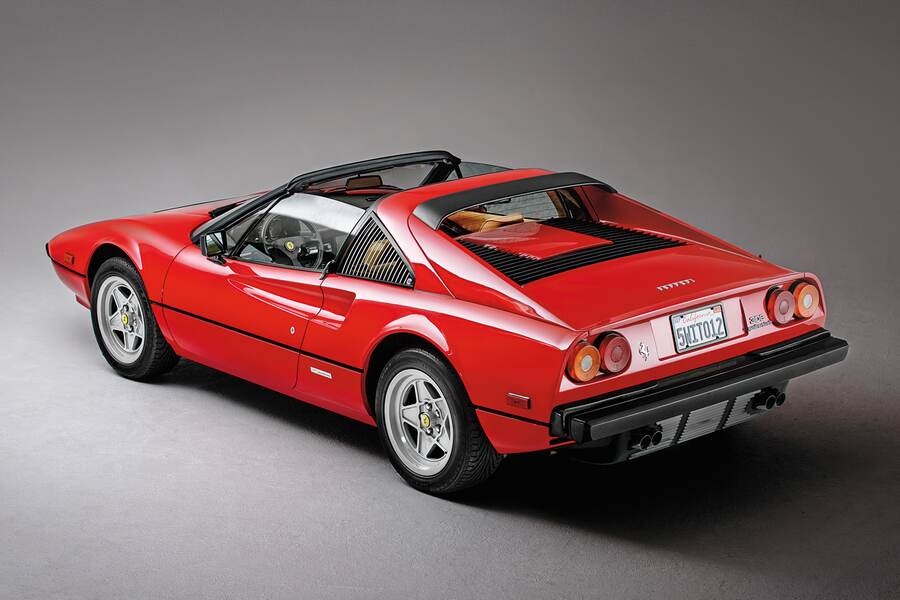 Ferrari introduced the much-improved 308 Quattrovalvole (better known as the QV) at the Paris Auto Show in October 1982. This ultimate iteration of the 308 featured four-valve cylinder heads and an improved engine-management system that boosted U.S. output to 230 hp. Sales climbed once again, with 748 GTB QVs and 3,042 GTS QVs built by the time production ended in 1985.

While the QVs are more refined than the early carbureted models, all 308s are non-temperamental and user-friendly, and can comfortably be used as daily drivers. In addition, they are reliable and easy to service by Ferrari standards. Add in the aforementioned good looks, and it’s no wonder these sports cars remain so popular.

Like so many other older Ferraris, 308s have doubled in price over the last few years. While that’s bad news for buyers, it has made the high cost of maintenance easier to bear. The dreaded cam-belt service, which rolls around every three to five years, can top $6,000 once you’ve added in the usual “while you’re at it” items. That expense was far more painful when early steel-bodied GTBs cost $20,000-35,000 [as they did when we last ran this Buyer’s Guide in mid-2013—Ed.], a time when rebuilding the engine or transmission could cost as much as buying the car in the first place!

While prices have recently risen dramatically, in the big picture 308s are only modestly collectible due to those high production numbers. Only the comparatively rare fiberglass-bodied cars—712 of which were built, versus 3,427 steel-bodied GTBs and just over 8,000 GTSs—will command a significant premium over their more plentiful siblings. GTBs generally cost more than GTSs, both because fewer were made and because the closed car’s roofline is much more attractive. Another price-defining factor is that the later 328 doesn’t cost significantly more than the 308, and so today’s still-rising tide raises both models equally. 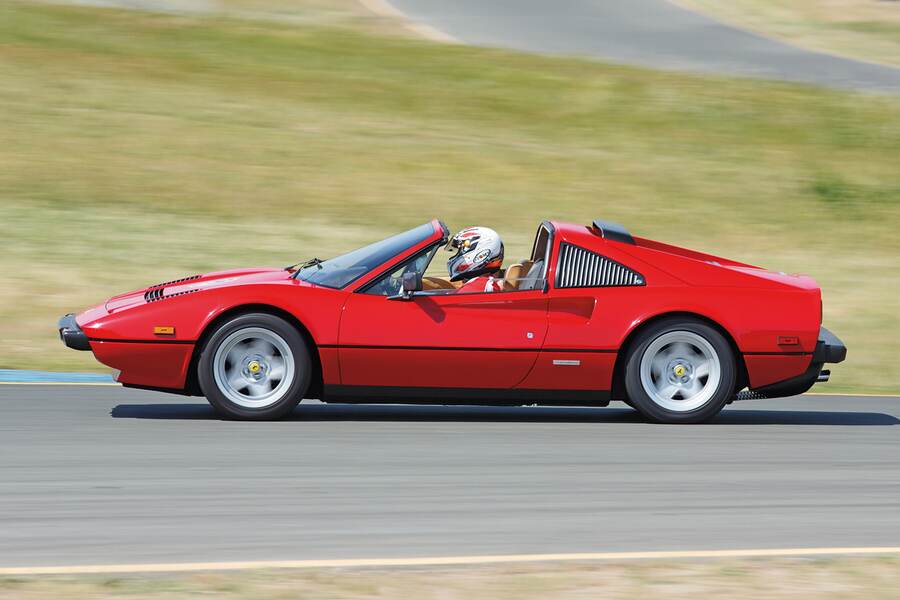 Investment opportunities aside, 308s are relatively affordable, user-friendly, and low-maintenance cars to own and drive. Most buyers look for either a carbureted model (which offers the best engine note) or a later QV (which is the fastest). The 1980-82 GTBi and GTSi are noticeably slower than their earlier and later counterparts, a fact reflected in their lower prices.

European-specification cars are lighter and faster than their U.S. models but don’t cost more—unless they are early examples with a dry-sump oiling system, which makes them very desirable to some enthusiasts. Prospective buyers no longer need to worry about EPA or DOT paperwork, as those Federal requirements only go back 25 years, although California has its own heavy-handed emissions rules.

Whichever version you consider, there are usually plenty of 308s for sale at any given time, so you can afford to be picky. My advice is to buy the best car with the most-detailed service history you can afford. —Michael Sheehan

These prices are for cars in good-to-great condition as of August 2022. 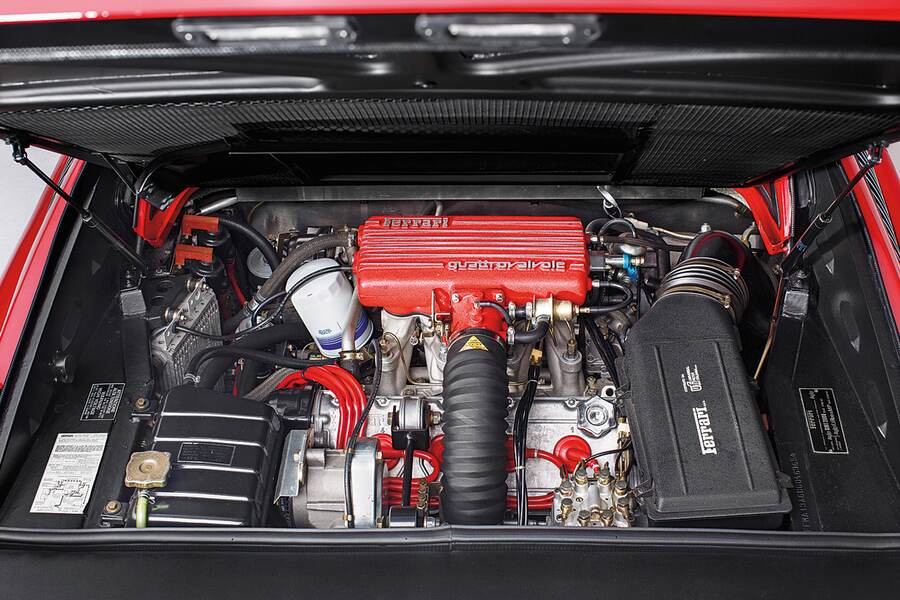 The good news is that 308s are uncomplicated cars, with no computers to fail, no electronic dash panels to go dark, no error codes to resolve. In addition, there’s no lack of mechanics out there with decades of experience working on these cars, a wealth of technical information can be found on the internet, both OE and aftermarket parts are readily available, and these cars can easily be serviced by an experienced DIY owner. Put simply, there are no mysteries to keeping a 308 on the road.

The bad news is that, only five years ago 308s cost half or less of what they do today. This led to them being owned by budget-minded enthusiasts who were unwilling or unable to spend the money to maintain and repair them properly. Making up for years of deferred maintenance can be very expensive, and routine jobs can rapidly snowball out of control. Given the potential costs involved, I always recommend having a pre-purchase inspection performed by a qualified and experienced mechanic and spending the time, trouble, and extra money up front to buy a car that’s been properly taken care of. Such a 308 will cost less in the long run, and you’ll enjoy it far more along the way.

Like all older cars, these Ferraris have their shortcomings. If you’re considering a carbureted 308, make sure its emissions system is included (and ideally functional). In many cases, this complicated and inefficient setup will have been tossed in the trash decades ago, and finding original parts today is both difficult and expensive.

While fuel injection is readily understood, few young mechanics have grown up servicing carburetors, so rebuilding and synchronizing the early 308’s four Weber 40 DCNF carbs can be problematic. The original ignition system can likewise be a challenge. The twin Magneti Marelli mechanical distributors will eventually need to be rebuilt, their points replaced, their advance mechanisms greased, and their advance curves tuned and synchronized on a Sun or Allen distributor machine (neither of which has been produced for decades). Upgrading to modern aftermarket electronic ignition, which can be invisibly concealed inside the distributors, is a popular option.

Despite their age, I regularly see 308s that have never had a cooling system service. Radiator and heater hoses are often as hard as hockey pucks, and the radiator and heater cores are plugged or leaking. Replacing all the coolant hoses and rebuilding or re-coring the radiators and heater cores is sometimes the only way to make a 308 reliable. More modern electric fans and aluminum radiators are much more efficient but negatively affect originality. 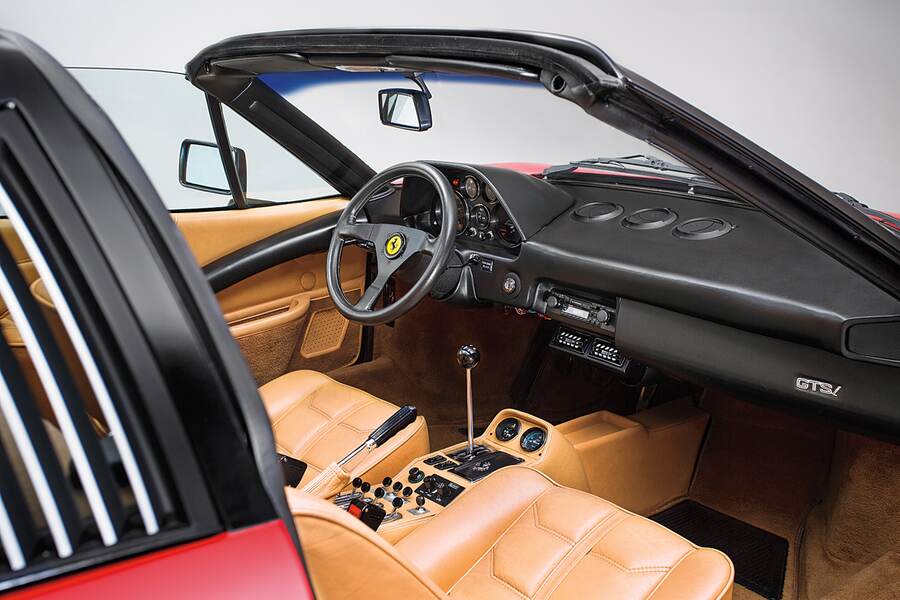 Every three to five years, the cam belts need to be changed. This major service can run $6,000-8,000 if you decide to get the car fully up to scratch with all the items that may need to be addressed at the same time, such adjusting the valves, degreeing all four cams, installing new cam seals, tensioner bearings, and auxiliary belts, fitting a rebuilt or updated water pump, replacing the heater and coolant hoses, flushing the coolant and brake systems, changing the engine and transmission oil, and so on.

While the 308 was among the first Ferraris to have some level of rust-proofing, it wasn’t comprehensive by today’s standards. The most common areas to find rust are right behind the front wheels and in the lower portion of the doors.

Before 1983, most European-model 308s came with metric-sized TRX wheels while U.S. models came with 14-inch wheels. Today, high-quality tires are not readily available for either wheel, and the Michelin TRX rubber is very expensive. The easiest update is a set of 16-inch wheels from the 308 QV, and good aftermarket reproductions are available at reasonable prices.

While the 308’s electrical system is quite simple, the factory’s low-quality fuse boxes are prone to electrical issues. Look to the aftermarket for high-quality replacements.

The 308’s parking brake can be problematic. It’s an unusual design that’s incorporated into the rear brake calipers, and should be inspected at every service. 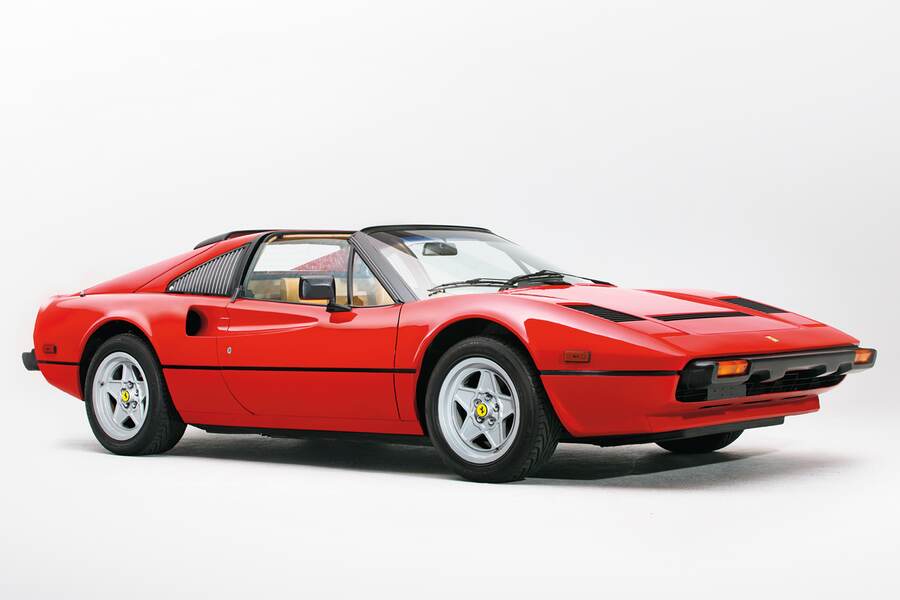 While Euro-spec 308s can be imported today without concern for EPA or DOT rules, there are still plenty of grey-market 308s out there; these cars were imported and converted to meet U.S. crash and smog requirements. Some of the shops that did such conversions were crude or shady (or both), but most suspect work will have been corrected long ago. Once again, though, a pre-purchase inspection should answer any questions and literally buy peace of mind. —Michael Sheehan

In any guise, the 308 delivers a great driving experience.
This is what we’ve said about these cars over the years.

While there is no question the QV engine is smoother and easier to use, its sound fails to reveal its competition breeding like the earlier [carbureted] V8 does. That, though, is the only way the earlier Ferrari is superior. The instant you settle into the QV’s cockpit, the years spent perfecting the model are noticeable. The seats look better, are more comfortable, and have superior bolstering. The supplemental instruments’ positioning is a vast improvement, as is the feel and placement of the newer (but still non-adjustable) steering wheel.

While the four-valve’s controls remain heavy at a dead stop, everything lightens up immediately once the car is under way. The transmission, with its shorter gear lever, remains notchy but is easier to use. Likewise, the accelerator, brake, and clutch pedals are better traveling companions, particularly when pottering in town.

Not surprisingly, the open-top GTS lacks the chassis integrity of the GTB. When you hit bumps or tackle a corner, there is more flexing. Fortunately, it isn’t too severe, and this remains a car that can be driven with vigor. And thanks to that Bosch fuel injection, the QV doesn’t suffer from fuel starvation, a malady that afflicts all carbureted 308s when pushed hard.
—“The Affordable Ferrari,” FORZA #25

At six-feet-tall and a few pounds north of my ideal weight, older Ferraris are usually a bit tight. This 308 is no exception, but the seats are supportive and I’m able to find a comfortable driving position, although I would have liked the steering wheel tilted down a bit. Visibility forward is excellent; rearward, it’s a bit less so, but still quite acceptable.

The V8 fires up instantly, with that intoxicating mechanical whir and exhaust burble behind my head. The clutch pedal is very heavy—there are no hydraulics to help your left leg—but the gearshift is smoother than in any other Ferrari of the era I have driven.

Once underway, acceleration is satisfying, more than adequate for a car with sporting pretensions. The motor has no dead spots, no problems anywhere in the rev range, which is exceptional for a car with Weber carbs. And did I mention the sound?
—“Back to Basics,” FORZA #62

Around corners, the 308 is quite confidence-inspiring, thanks no doubt to the freshly rebuilt suspension and modern 16-inch rubber. There’s noticeable body roll as the Ferrari turns into a corner, but once it takes a set it carves through very neutrally and can easily be coaxed into a slight tail-out attitude. This European-specification car also feels lighter and more nimble on its feet than most U.S.-spec examples, likely because it simply weighs less.
—“Rocky Mountain High,” FORZA #106 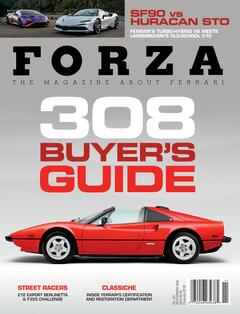