This 360 Spider sat unwanted and unloved at a dealership until Richard Maury spotted it. 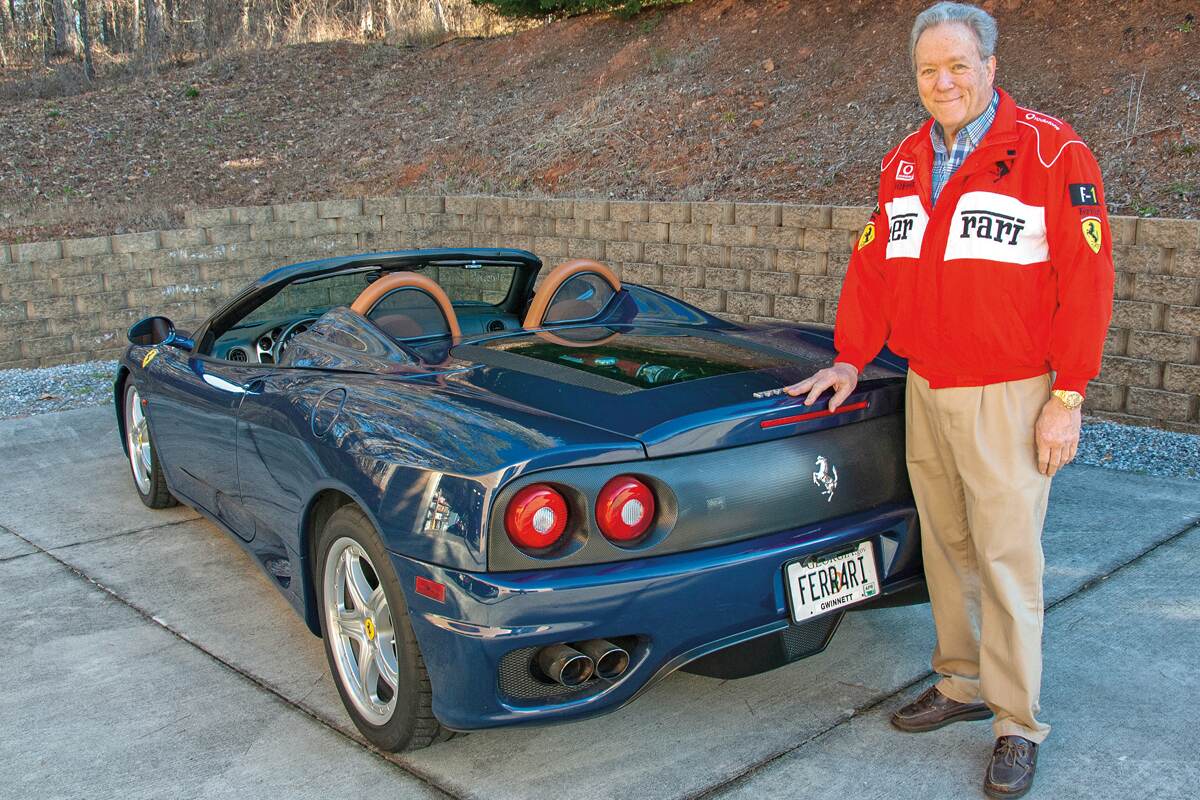 What cars did you own before the 360 Spider?

I have always been a car guy. When I first started out with cars, I would buy one, clean, tune, and the like, and then sell for slightly more than I paid for it. My first car at 16 was a VW Bug at my father’s advice. After six months, I was driving an Austin Healey Sprite, then a Morgan +4, and later an MGC Roadster.

I also had the opportunity to work on exotics such as Ferrari, Jaguar, Lamborghini, Porsche, and Aston Martin. Ferrari always held a special place as it just got me excited where the others were just neat cars. It would take years, but I always wanted to eventually have one of my own.

I read once that when you got in a car to turn it on, it needed to turn you on as well. My Ferrari 360 Spider and all of them I have driven do this. I cannot say this about many other marques.

What was your first experience in a Ferrari?

I was put in charge of the car. Turns out one of the point sets in one of the distributors had broken one of its springs and grounded out the ignition. The owner elected to put in all four point sets. Back then, they cost $10 per set. As I was only making $1.50 an hour at the time, I thought, “How can anyone afford one of these cars?”

I was then told to take it home for the week and drive to make sure all was well. Just 19 years old with a V12 Ferrari—a dream come true! 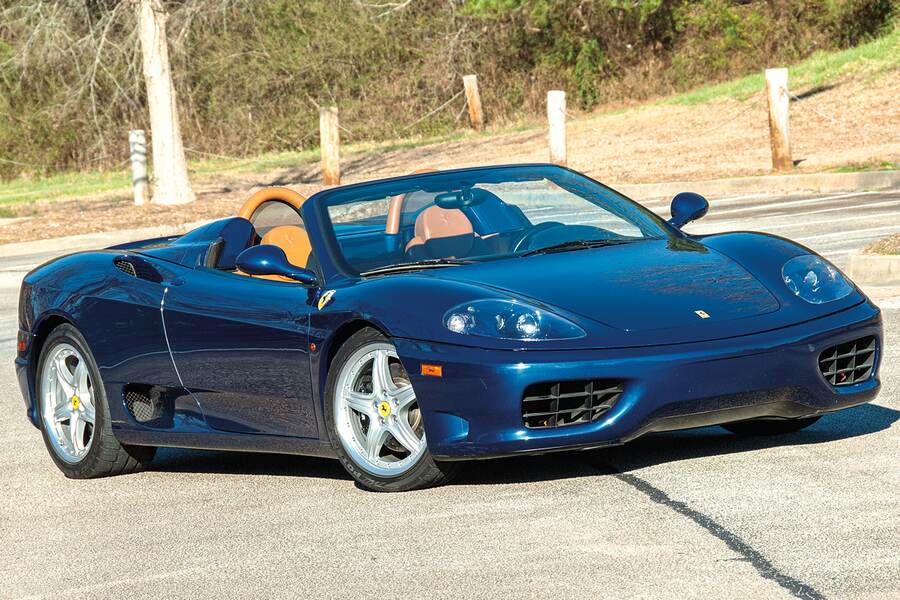 The older Ferraris felt like they were carved out of a solid block of steel. The doors closed like a bank vault, the controls were stout, with not a lot of plastic—very different from the current cars. The newer ones have a nice feel, but not like the older ones. It’s hard to describe unless you drive them back to back.

Once back on the road, the lady only wanted $4,500 for the car. Once again, that was priced in the stars as far as I was concerned.

You later parlayed your service station experience into a career?

Having to work on my own cars is how I got into working on them for a living. After owning and fixing up a Jaguar XKE 2+2, I found an XKE Roadster. I paid $1,900, which at the time was a year’s salary. It was my everyday car to and from college at Georgia Tech and work, about 50 miles a day. For four years, I never missed or was late for a class, even in the snow and rain.

Fast forward to 1981. I had worked for a few years at a large industrial printing company, using my college degree. In the evenings, I would be at home working on cars, both my own and friends’. The printing company folded and the local Jaguar shop had been after me to work for them, as I was fixing their customers cars when they could not. I went to work for them and am still there after 40-plus years.

What led up to buying the Ferrari?

I ended up restoring my XKE roadster to a very high standard. Even got an XKE coupe, stripped it, and made a race car out of it. I was and am involved with Jaguars. I became the President of the Jaguar Clubs of North America for five terms, and Jaguar ended up borrowing my XKE for the 50th anniversary of the model and traveled it around the country in 2011.

The car and I ended up at the Pebble Beach Concours helping to put on a public relations event. Someone at the concours really wanted the car and made an offer I could not turn down. I called my wife and told her that I had sold the XKE. She asked what I was going to do, and without hesitation I said, “Buy a Ferrari.” 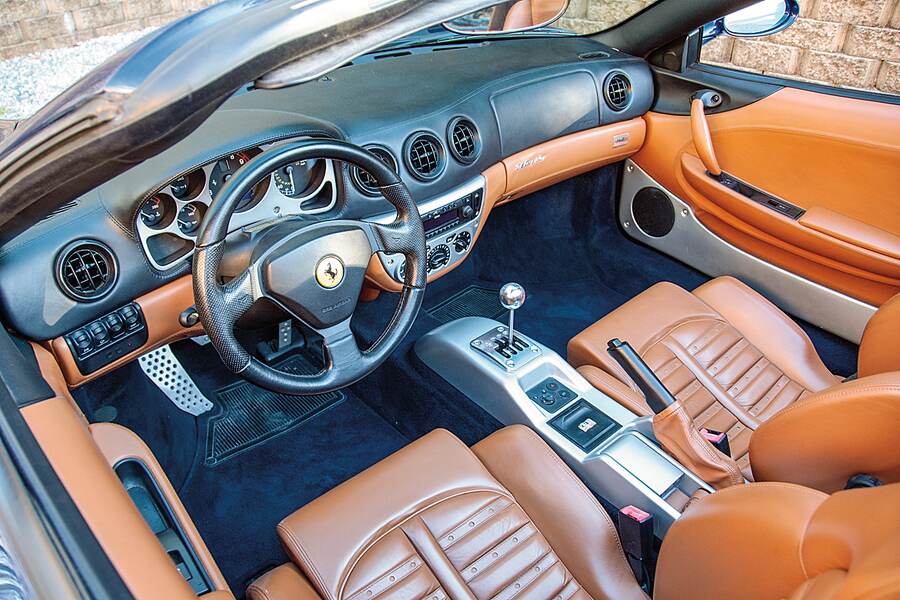 I found a 2004 360 Spider at Ferrari of West Palm Beach listed on eBay. I called and talked to Bud Root there. He allowed how the car was on consignment and had been in their showroom for a year. No one wanted it because it was TdF [Tour de France] Blue and had a manual transmission.

This was just what I wanted, so I flew down to Florida from [my home in] Atlanta and drove it back with a friend, top down all the way. Before this, I had never even sat in a 360, but I figured with such great reviews it had to be nice.

Bud told me that, one day, this color and the manual would be desirable, and how right he was. At the time, he admitted the nickname for this hue was “no-sale blue”! Also, the six-speed manuals were rather rare. I recently read that, of the 360 and F430 models, 93 percent were F1. Today, there are companies that will convert the F1 cars to manuals. Not an inexpensive job, but the demand is there.

On a conservative side, my car is worth about 50 percent more than I paid for it. Not that it’s for sale, but I’ve been watching the market.

What do you use your Ferrari for—commuting, weekend driving, road trips?

I drive the car just for the pleasure of driving. I take it to work, car shows, visits with friends. I have averaged about 1,000 miles per year since I have owned it, or about 12,000 miles. As I have other cars to drive, I rotate them and usually keep them parked during bad weather. Not that the car cannot handle it, I just like to keep them clean for when I do drive them.

How does the 360 compare with other Ferraris you’ve driven?

I had also worked on Dinos, 308s, and 328s, but the 360 really lit my fire! With nice features such as a fully electric top, climate control, electric windows, and electric adjustable seats, it is a very comfortable car to drive. It does not have cruise control, cup holders, automatic wipers, or auto headlights; it counts on the driver controlling those items and not trying to drink and drive. And the 400-hp quad-cam V8 with its Tubi exhaust, which was on the car when I bought it, has a thrilling exhaust note. At full chat, it has a marvelous sound, like ripping silk. 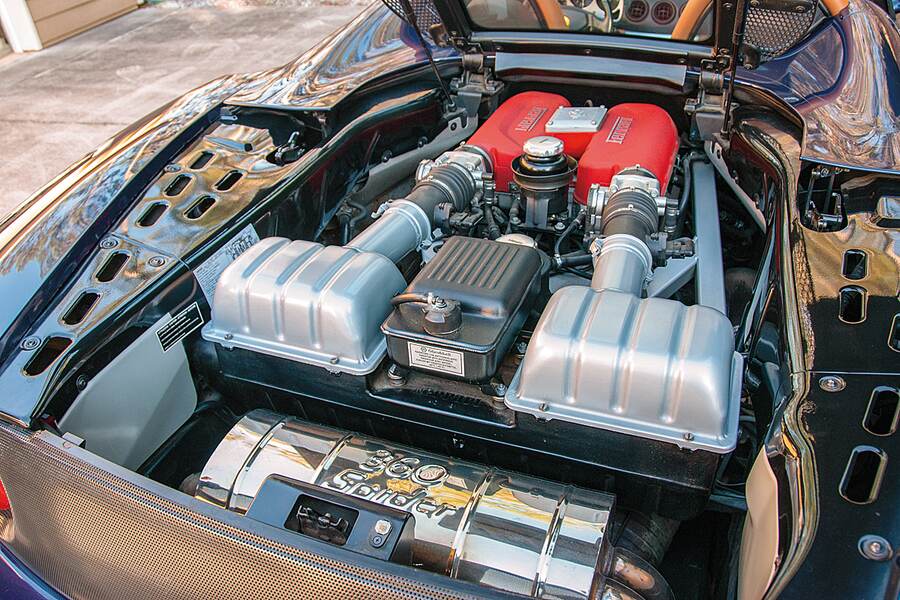 Has the 360 lived up to your expectations?

I have had the car now for 12 years, and other than normal maintenance and a set of tires it’s been virtually trouble-free. I did modify the clock to 12-hour time instead of 24 hours, and sourced an original 330 air horn set and switched out the regular electric ones. The car has a great selection of options such that, if I had ordered it new, I don’t think I would change a thing.

The 360 has turned out to be very comfortable. The engine and sound are just something that has to be experienced. Everything about the car screams “drive me hard.” It is real easy to be outside of the abilities of most normal cars and not even realize how fast you are going or taking corners. But while it has enough power to impress, it’s not so much as to be at illegal speeds with a quick push of the throttle.

This is a car that will remain in my ownership until I feel that I cannot safely drive it. It is a really nice, easy-to-live-with Ferrari. Even after seeing the newer ones, I still get excited when I look at the 360.

What makes the Ferrari different from all the other cars you’ve owned?

With car shows and car clubs, when you talk about what cars you have, everyone knows what a Ferrari is. When I had a Morgan, most people thought it was an MG of some sort. Ferrari is at the top of the pecking order, so to speak. I enjoy showing and sharing it with people. A lot of folks have never seen one up close, and a lot of times I will let them sit in it and take their picture with their phone or camera.

There is not a lot of Ferrari-specific action in my area of Atlanta, but there are a lot of generic car shows. The car really stands out among the Mustangs and hot rods. It’s a lot of fun standing back and listening to people talking about the car when they have no idea about it.

What other cars do you currently own?

It’s amazing how life turns out. I like cars for what they are and enjoy driving. If I had been a bit wealthier early on, my dream car was an Aston Martin. I could not afford one, so worked my way up to a Jaguar, but I now have a 2007 Aston Martin Vantage which gets driven regularly. And also a [vintage] Corvette Sting Ray for my wife.

I have met so many nice people over the years through the car business, clubs, and just driving around. There is something about the car culture that brings people together. I for one am glad to be a part of it—especially when I show up in my Ferrari. 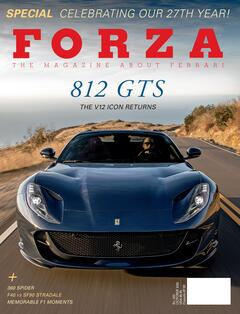