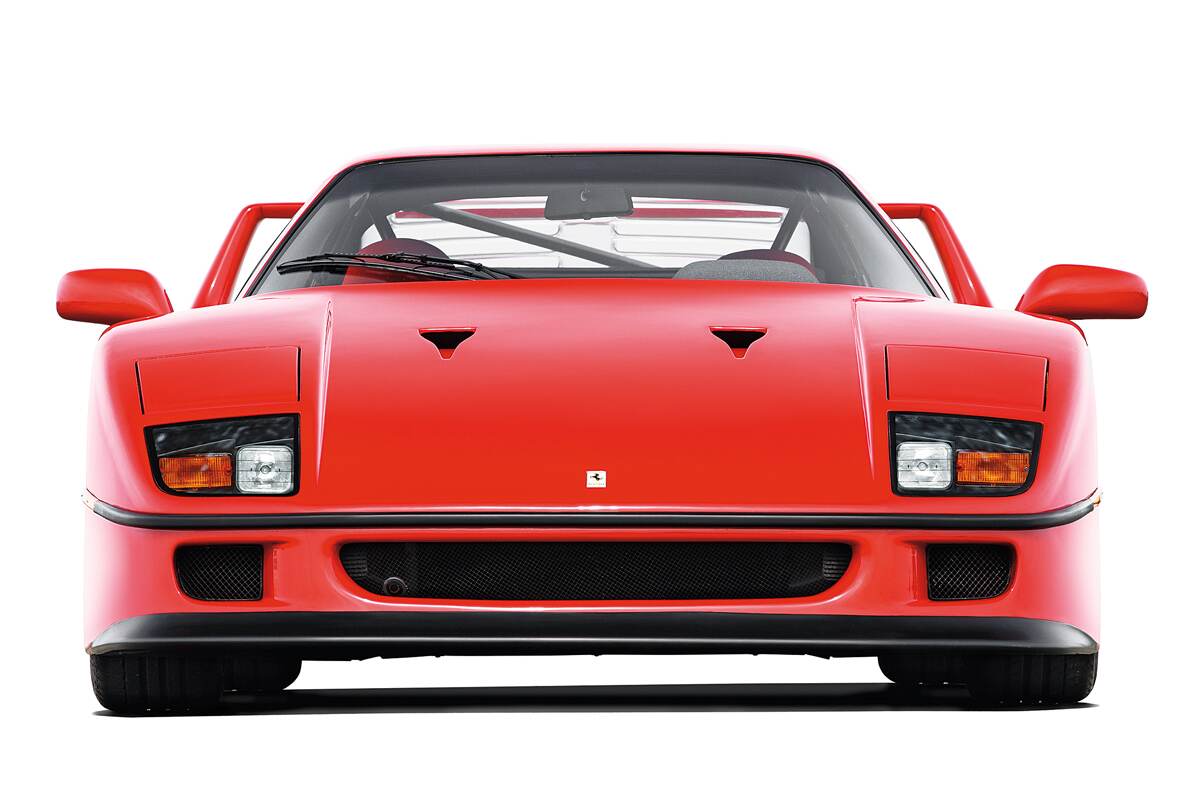 On July 21, 1987, the world’s automotive media gathered in a darkened auditorium in Maranello for the debut of, well, no one knew. Enzo Ferrari, in one of his last public appearances, greeted his guests then gave a signal. A red car cover was swept aside, and the audience gasped. Before it had ever turned a wheel in public, the F40 was a legend.
Built to commemorate the company’s 40th birthday, the F40 was Ferrari’s answer to arch-rival Porsche’s 959. Each was the world’s fastest car when launched, but they otherwise couldn’t have been much more different. Where the Porsche was hailed as the most technologically advanced street machine ever created, the Ferrari relied on well-proven technology, light weight, and big power to make it the first road car capable of topping 200 mph.

At heart, the F40 was a development of Ferrari’s first supercar, the 288 GTO—or, more accurately, the 288 Evoluzione race car. With its purposefully aggressive composite bodywork, basket-handle rear wing, extremely wide rear haunches and tires, slatted rear window, and low stance, the Pininfarina-penned F40 looked like a competition car for the road. That impression continued in the cockpit, which featured a pair of race-ready seats, a fabric-covered dash, and no luxuries like leather, carpeting, a radio, or door handles.

Tucked underneath the enormous rear clamshell was a twin-turbocharged 2.9-liter V8 engine that produced 478 hp. Thanks to that output, and a curb weight of just over 2,700 pounds, the F40 could sprint from rest to 60 mph in just over 4 seconds—an astonishing accomplishment for the late 1980s.

More than pure speed, however, the F40 served up a savage and visceral driving experience. Even the most jaded journalists used up their monthly allotment of superlatives when describing the new Ferrari’s sturm und drang, all while acknowledging that part of the thrill came from trying to master a car that was ready, if not eager, to bite the unwary.

Only 1,369 F40s were built, but that makes the model far more common than Ferrari’s earlier and later supercars. As a result, F40s cost less than the 288 GTO, F50, Enzo, and LaFerrari, although they are far from inexpensive. Regardless, if you can afford one, the F40 is a Ferrari like no other.

The F40 was the definitive poster car of the late 1980s and early ’90s. Built to celebrate Ferrari’s 40th anniversary, it was fitting that the model was the last car built under Enzo Ferrari’s supervision. It’s also appropriate that the F40 was Ferrari’s fastest, most powerful, and most expensive car built to date. 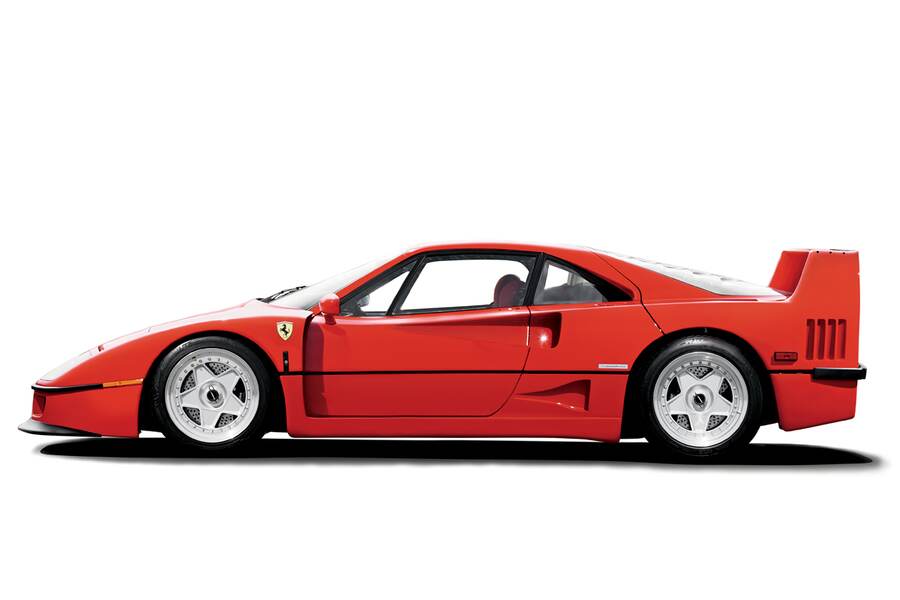 When it introduced the F40 in 1987, Ferrari planned to build only 400 examples—a significant increase compared to the 288 GTO, of which only 272 were produced. But then the lucky first owners of $250,000-300,000 European-specification cars flipped them for over $1 million, and the first handful of the 213 U.S.-spec cars, which appeared in 1990 and listed for around $440,000, also enjoyed an instant seven-figure market value.

This intense demand led to 1,369 F40s being built between 1987 and ’92. Unfortunately, the high production number, combined with the world plunging into a global depression in 1990, quickly sent prices plummeting. Values bottomed out in the late 1990s in the $225,000-250,000 range.
That said, the F40 and the 288 GTO were the only truly collectible Ferraris of the 1980s, and the market slowly recovered. Three years ago, F40s could be bought for as little as $1 million—but over the last two years, values have climbed like a rocket.

Early European models feature sliding Perspex side windows, lack catalytic converters, and are noticeably quicker than U.S.-spec examples, which have heavier front and rear frames and rockers, glass windows, and catalysts. Later cars have air-conditioning—a concession to a hot cockpit and the all-important American market—and may come with adjustable suspension, which both raises the car to clear speed bumps and lowers it at speed. None of these configurations is more or less valuable than any other, although the early Euro models and the last of the U.S. cars built in 1992 seem to be the most desirable to buyers.

In the past, European F40s stayed in Europe (or Asia) because of the cost and complications to convert them to meet U.S. DOT and EPA rules. Today, all F40s are more than 25 years old and thus exempt from national smog and safety requirements. They are still subject to state emissions laws, however, which is bad news for potential buyers who live in California or one of the other states that have adopted its pollution laws. —Michael Sheehan

These prices are for cars in good-to-great condition as of December 2021. 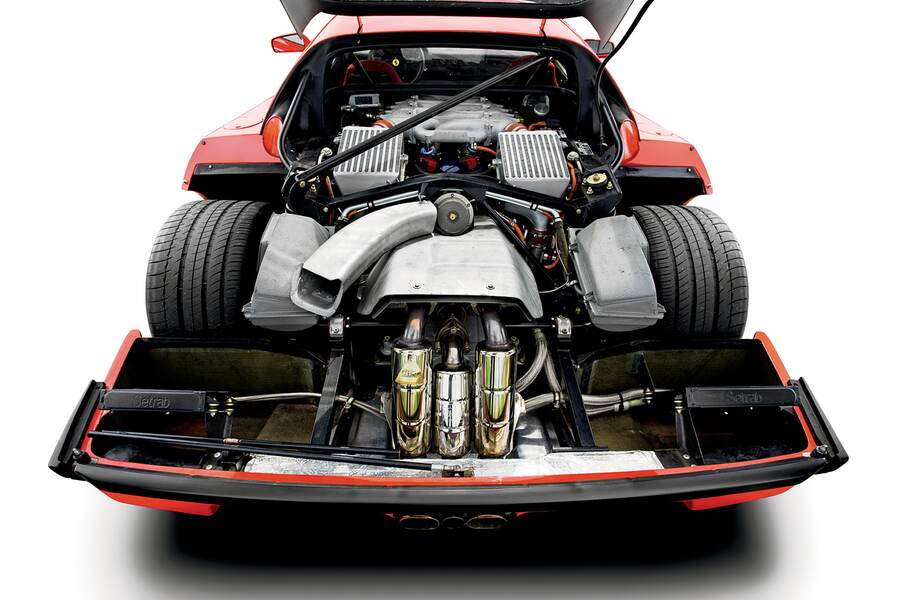 The 1980s introduced the word “supercar” to the lips of automotive enthusiasts, and Ferrari was a major player in this brave new—and extremely fast—world. With first the 288 GTO then the F40, the company defined never-before-seen standards for power, performance, and outrageous styling.

Today, the F40 remains coveted, but there are caveats any potential buyer should consider before taking the plunge into this very expensive world. The newest F40 is more than 30 years old, and since most of them spend their time on display before being driven hard for a few miles then put away wet, almost every example that comes to market is due for a very major service.

For starters, virtually every original rubber item in an F40 will be as hard as a hockey puck and well past its due date. When low-mileage examples change hands, it’s common to replace every radiator and heater hose, every suspension and shock bushing, and ball joints, axle boots, and tie rod ends. Likewise, the rubber foam in the seats, under the dash covering, and inside the headliner turns to dust with age, so eventually the seats, dash, and headliner will need to be re-covered.

Since few F40s are driven appreciable distances, they rarely follow the usual timing belt and fluids maintenance schedules. That’s a problem for buyers and current owners alike, because all that sitting around can lead to numerous issues including frozen brake calipers, leaking oil seals, clogged fuel-injector nozzles, and corroded cooling-system components. And unlike any other Ferrari besides the 288 GTO, the F40’s twin-turbo V8 utilizes an engine-management system from Weber-Marelli, and parts (and knowledge) can be very scarce. Those turbos will eventually wear out, requiring new seals and/or bearings.

Other problem areas are typical of the era’s Ferraris. The F40’s fuse and relay panel simply isn’t up to the task of handling high-load circuits when the headlights, radiator fans, and air conditioning all kick in, but aftermarket versions are. On U.S.-spec cars, rubber components on the in-tank fuel pumps disintegrate and wreak havoc on downstream fuel-system parts. (Non-U.S. cars have external fuel pumps so don’t have this problem—you may come across a U.S. car that has been similarly retrofitted—but do feature a fuel cell with a rubber bladder inside that must be replaced every ten years, requiring the engine to come out.) The plastic fuel-pump covers can crack and leak fuel, but sturdier aluminum replacements are available through the aftermarket.

While the F40 has a spare-tire well under its hood, changing a flat isn’t a simple process. Loosening the center-lock wheel nuts requires two people, a special tool (which is included in the car’s tool roll), and a massive torque wrench (which isn’t). I recommend calling a flatbed tow truck instead, which comes with its own challenges: The F40’s long nose can easily scrape, which is why many owners fit skid plates underneath. The car’s overall low ride height compounds the concern, even during regular driving. 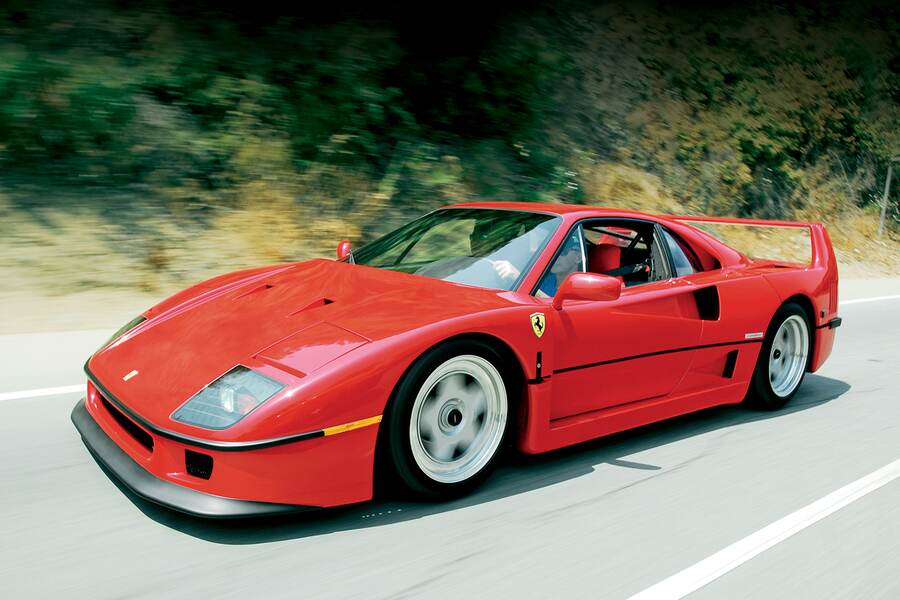 Also potentially concerning are the F40’s brakes, which don’t convey confidence during track driving. OE supplier Brembo sells various upgrades that work with the stock wheels and can be easily removed when it’s time to return the car to original.

While few F40s will have all of these problems, when a new owner commits to resolving all the deferred maintenance issues, they can expect to see a service invoice of $50,000 or more. That’s a lot (albeit something of a financial rounding error compared to the car’s value), but most owners find it money well spent in order to possess one of the greatest supercars the world has ever seen. —Michael Sheehan

The F40 offers a mix of rawness and speed not found in any other road-going Ferrari. Here’s some of what we’ve written about the driving experience.

I climb into the passenger seat and pull the door shut by clumsily grasping its rudimentary plastic inner liner. There is no conventional inside handle, just a simple wire loop that releases the door latch.

The doors aren’t the only Spartan item found inside the cabin. The dash is covered in felt, and there’s glue sticking out of the joints in the carbon-fiber/Kevlar tub. It’s all a bit rough around the edges, but this was cutting-edge technology 30 years ago and Ferrari was one of the first manufacturers to use such weight-saving measures in a production car.

As I prepare to pull away, I’m shocked by how heavy the clutch pedal is; how did people race these cars for 12 or 24 hours? Likewise, selecting gears requires focus and a strong shove. Yet shifting is more of an event, in the most satisfying way, than in almost any other Ferrari I’ve driven. 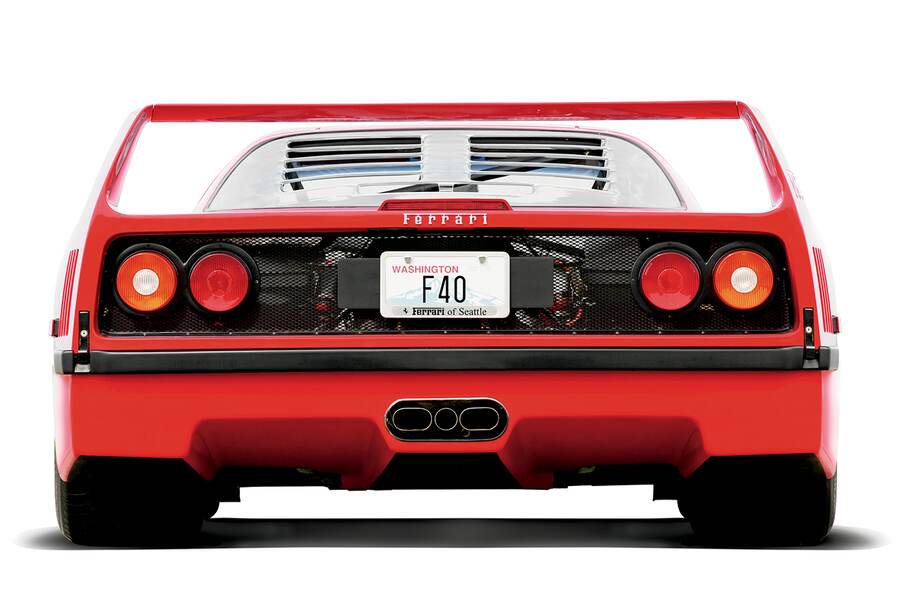 Make sure the heavy steering wheel is pointing straight ahead, as the push from behind is so sudden and the Ferrari is so light. The wide 335/35ZR-17 rear tires are just about able to transfer the sonorous wave of power and torque down to the asphalt, but if I’m too aggressive with the throttle the rubber will easily break traction, especially on corner exits.

I aim to keep the revs above 4,000 rpm at all times around the track, but it’s not easy. Each gear change needs time and planning, including a blip of the throttle before engaging a lower cog. The shift action and tight tarmac keep me busy, but every time a small straight presents itself I crack a smile as the F40’s torque viciously reels in the next corner

After my session, I park the F40 and ponder the driving experience. It’s hard work, both physically and mentally, but the rewards are commensurately higher. I certainly understand why the world is still obsessed with this car.
—“Bloodline,” FORZA #152

At the push of a button, the beast wakes up in the rear. Or not? Contrary to expectations, there is no infernal thunderstorm, only a dull rumble that gives a vague idea of ​​what’s to come.

Around 3,500 rpm, the F40 is almost tame. But woe to those who let themselves be surprised by the massive boost in performance that the biturbo V8 then releases on its 335/35ZR17 rear rollers. Then Enzo’s last opus wildly wags its tail in search of grip, paints black lines on the asphalt, and catapults its crew towards the curvature of the earth. Or also straight out of the curve. The rear wheels have as much grip on full throttle in first gear as the rear legs of a startled dachshund on a freshly polished parquet floor. A lot of power is also required to apply the clutch and brake, though this must of course be supplied by the driver.

Only a thin plastic wall separates the occupants from the engine, whose aggressive bellowing is omnipresent. Intake and exhaust noises, the hissing of the wastegate, not to mention the hard blows to the undercarriage from rocks and road debris or the “click-clack” as I shift gears. All this gives me a feeling of being at one with the car. And did I mention the V8’s responsiveness (once on boost) and torque are amazing?
—“The 200-mph Club,” FORZA #184 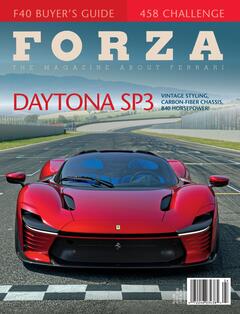