Ferrari started building front-engine V12 sports cars in the 1940s. With the high-tech 812 Competizione, it may have created the best one yet. 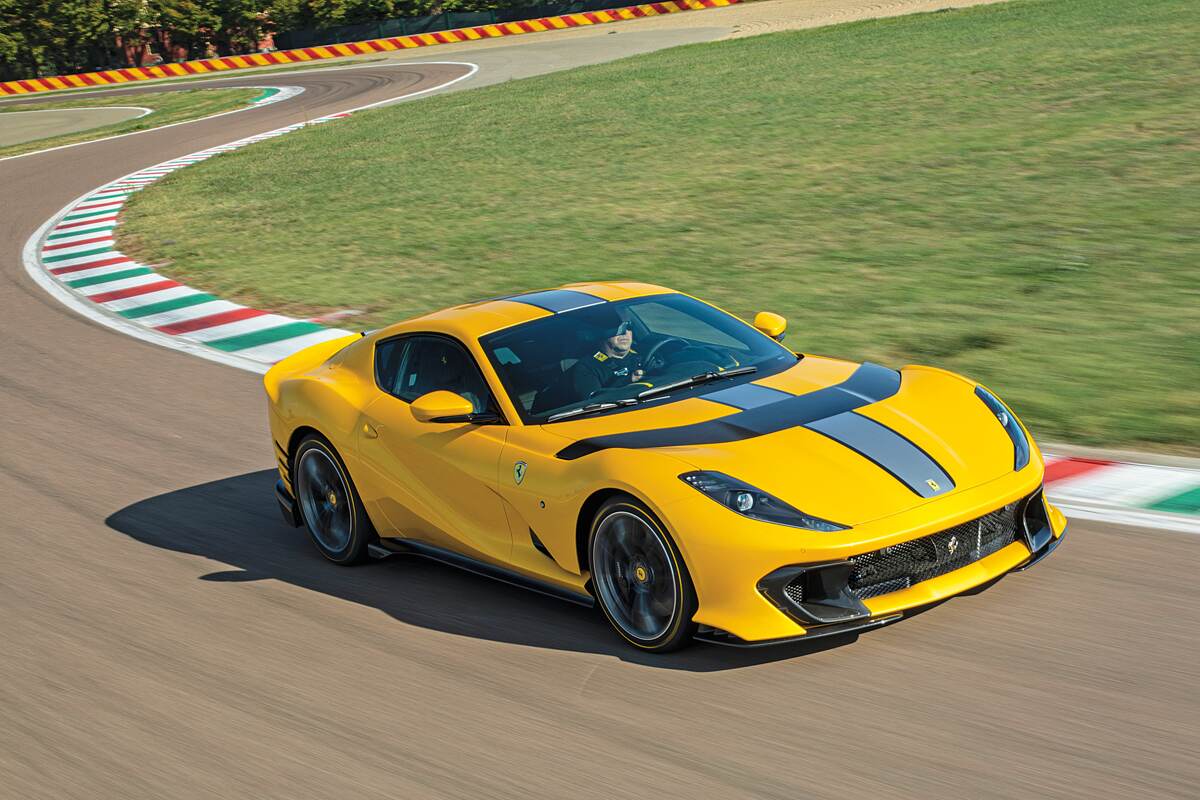 If you’re in the market for an 830-horsepower Ferrari, Maranello has you covered. Twice, in fact. But while the 296 GTB and 812 Competizione share a common power output, the way these two machines go about achieving that breathtaking figure is quite different.

The mid-engined 296 arrives in early 2022 with a turbocharged hybrid V6 engine that riffs on current Formula 1 technology. The 812 Competizione pulls in the opposite direction, and harks back to Ferrari’s origins with a normally aspirated V12 mounted up front. As I’ll soon discover, this classic formula still works magnificently—especially if, as you’d expect from Ferrari, the newest 812 packs few high-tech tricks all its own.

Maranello plans to build 999 examples of the 812 Competizione coupe, along with 599 copies of the open-air Competizione A, which features a new targa roof with a manually removable carbon panel. As you’d also expect from one of Ferrari’s special series offerings, all of the Competiziones have already been sold. 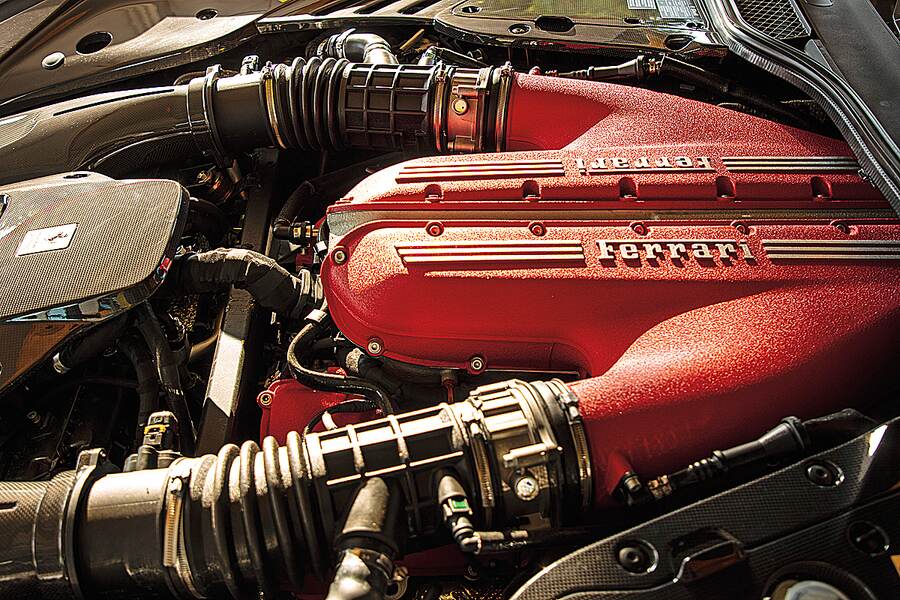 Today, I’m driving the coupe around the Fiorano test track. It’s 9 a.m in late October and the circuit is shrouded in fog, making me wish I had packed some warmer clothes. The fog also disguises a hint of moisture on the mostly dry surface, which makes the Ferrari PR staff anxious since the Competizione rolls on Michelin Pilot Sport Cup 2R tires optimized for warm, dry days. I’m already a bit nervy any way, because the Competizione is essentially a faster 812 Superfast with sharper teeth, and that machine never has lacked anger.

I jump into “my” Giallo Modena test car’s cabin, which follows the standard Superfast architecture save for a kitsch nod to the now departed open-gate manual shifter for the dual-clutch gearbox’s controls. The occupants benefit from carbon fiber sports seats with their centers covered in grippy technical fabric and optional (and likely not available in the United States) four-point harnesses, giving the cockpit a focused feel comparable to that of the 488 Pista and F12tdf. Unlike owners of those hard-core machines, Competizione buyers need not suffer for their high-performance desires—abundant luxury is available from an extensive options list, which includes plush leather seats and Alcantara carpets so nice it feels wrong to put my feet on them.

Test driver Raffaele de Simone climbs into his own Competizione and leads me onto the track. The revised V12 already feels more instantaneously responsive than in the stupendous Superfast, as admittedly insane as that sounds, and it growls deeply through new twin exhausts that the Ferrari engineers describe as trombones. This thing sounds mean and feels ready to pounce. 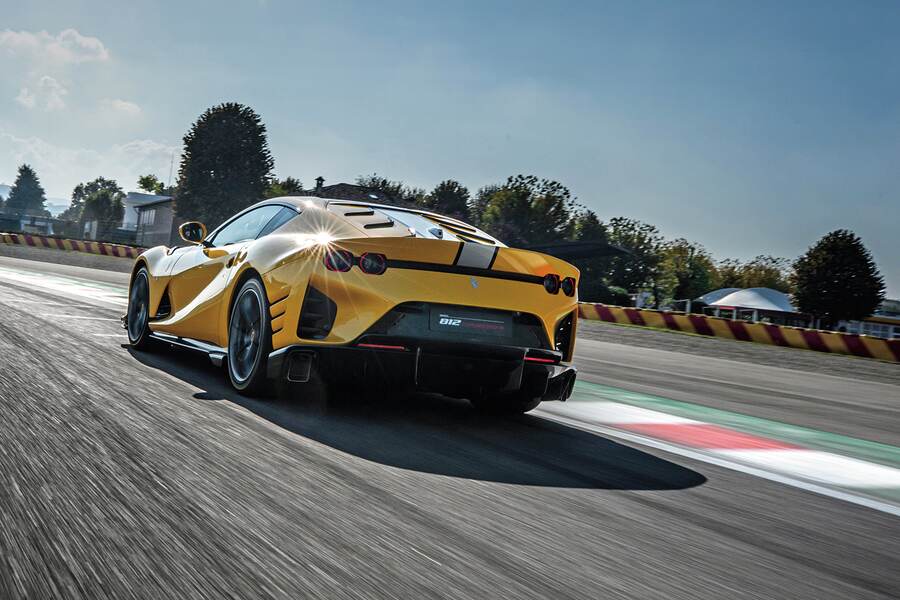 While the relatively modest 30-hp hike over the Superfast provides an easy headline, what really transforms the Competizione is the engine’s staggering 9,500-rpm rev limit, 500 more revolutions than before. It is Ferrari’s highest-revving road car engine of all time, and the changes made were extensive.

Variable-length inlet tracts smooth the torque curve throughout the rev range, though peak torque drops from 530 lb-ft in the Superfast to 510 lb-ft. That peak resides at a lofty 7,000 rpm, although 80 percent of the max is still served at a low 2,500 rpm. 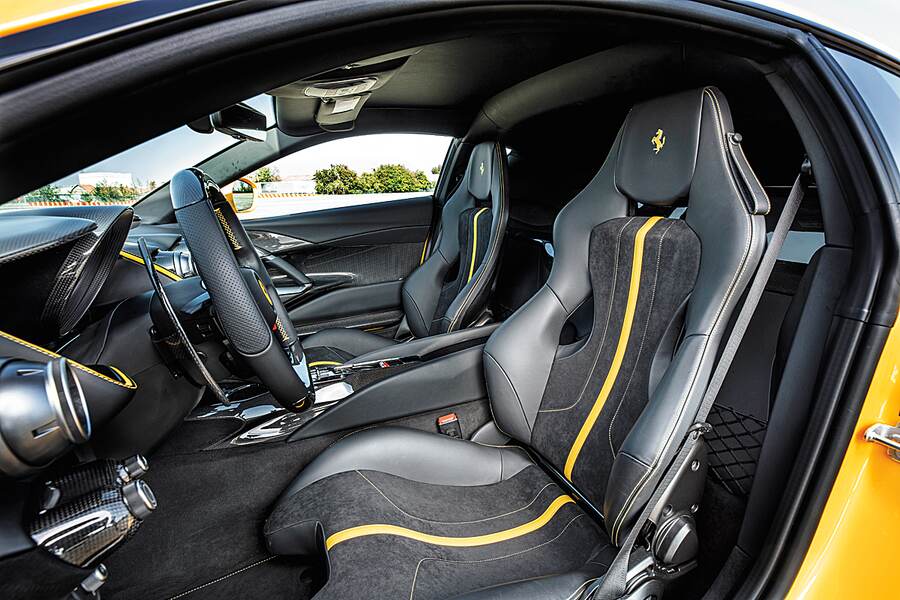 WITH THE CARS’ FLUIDS AND TIRES WARMED, de Simone bolts like the F1 safety car just pitted. I stamp on the gas; the Competizione’s response slams me back in my bucket seat, the tachometer needle flashes around the dial, and soon there’s too much happening to look at the clocks. It’s easier to take my cues from the shift lights flashing red, then blue, at the top of the steering wheel as the engine spins up towards the rev limiter with no let up in its vivacious energy. There’s nothing quite like the thrill of revs that climb like a rocket.

Blam! I click the shift paddle and instantly land back in a rev range that’s already beyond the reach of most cars. Always rapid-fire, the dual-clutch gearbox now shifts some 5-percent faster. The improvement is most tangible in the angry bark and precision engagement of downshifts, though there’s a pretty fierce punch when peak horsepower and an upshift coincide. It’s the kind of thing that makes you laugh, shout, or swear—or, more likely in this case, all three at once.

I feel connected viscerally to this sublime powertrain, with an engine that must be one of the greatest naturally aspirated units ever created—it’s all in the response of the throttle, the linearity of the delivery, and the driveability despite the staggering performance. With no sudden explosion of torque in the mid-range (like a typical turbocharged engine) and a power peak that doesn’t arrive until a lofty 9,250 rpm (750 rpm later than in the Superfast), this massive V12 encourages a more scruff-of-the-neck driving style, with big positive inputs. You don’t tap this performance accidentally; you monster it. 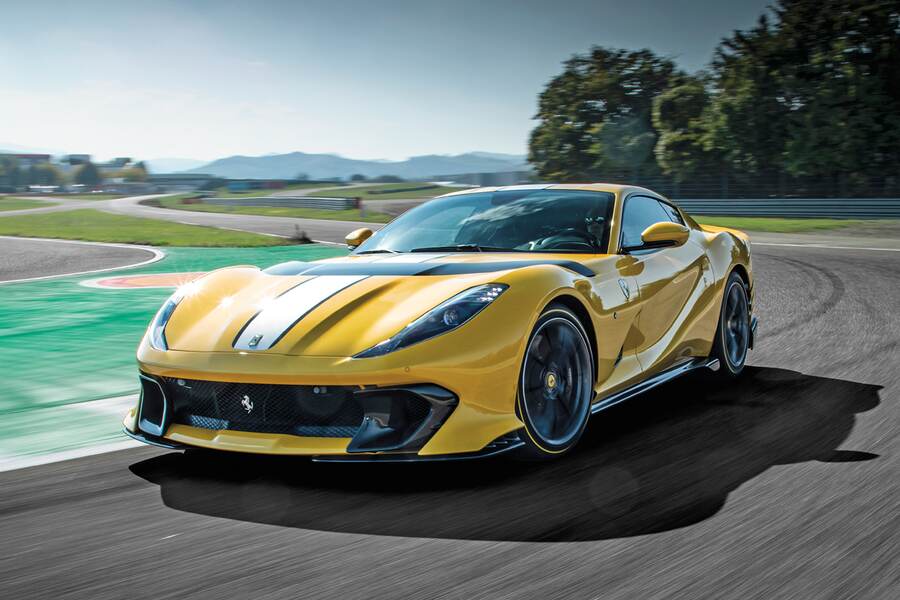 My one quibble is with the sound track. It’s dramatic, no doubt, but also gruffer than the Superfast’s, not as viscerally shrieky. My padded racing helmet must take some of the blame, but the new gasoline particulate filter no doubt detracts a little from the magic, too.

While the astonishing V12 is key to the Competizione experience, it does not dominate it, thanks in part to Ferrari’s chassis upgrades. The front springs are a whopping 50-percent stiffer, while the rears, borrowed from the F12tdf, are 9-percent firmer. Tire sizes remain unchanged, but the compound of the available Pirelli P Zero Corsas and Michelin Cup 2Rs is dramatically stickier than the usual road-car fare.

Weight drops a modest 84 pounds courtesy of such things as carbon-fiber bumpers, reduced soundproofing, and a smaller lithium-ion battery. Huge gulping inlets on either side of the front bumper feed SF90-style aero brake calipers (reducing temperatures by around 86 degrees Fahrenheit, according to Ferrari) fitted to the Superfast-spec carbon-ceramic discs. 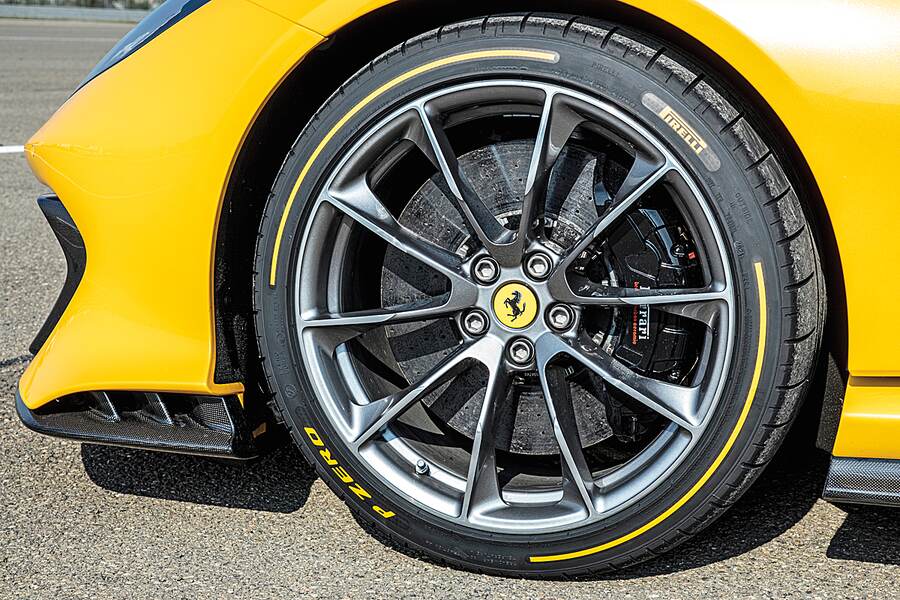 The revised venting extends to the car’s underbody, allowing it to manage airflow more effectively. You won’t see that without a set of ramps, but the Competizione’s biggest aerodynamic talking point is clearly visible—a carbon-fiber “blade” which cuts across the hood and into the tops of the front fenders. It evacuates air more elegantly than the huge vents that would otherwise be necessary.

At the rear, a massive new diffuser almost makes the rear bumper appear to float on hovercraft skirts; the exhaust gasses are said to interact with it to create extra downforce. There are also an aggressive ducktail spoiler and a rear “window” that’s actually a sheet of aluminum covered in vortex generators. These all help contribute to the Competizione’s extra 176 lbs. of downforce at 124 mph (though no one’s spilling the actual peak figure). There are echoes of Count Volpi’s famous 250 GT SWB-based Breadvan here, albeit not in the ungainly camera stuck on top, which feeds an image to the rearview display inside.

Ferrari’s Virtual Short Wheelbase receives an update to version 3.0. This all-wheel steering system debuted on the F12tdf and has previously felt somewhat edgy, but this new edition, which allows the rear wheels to turn independently of one another for the first time, thanks to individually controlled actuators, just feels more nimble. This is apparent through Fiorano’s fast right-left flick at Turns 2 and 3, where the Superfast driver might experience steering lag in the crossover between the rear wheels switching from pointing in one direction to pointing completely in the other. 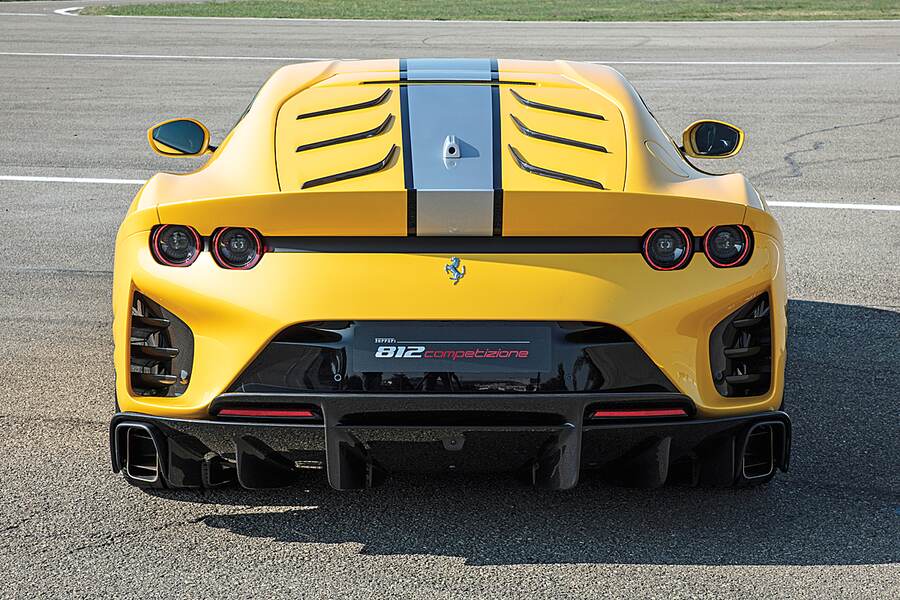 Even at low speed, the system pairs nicely with the 812’s trademark quick steering, which carries over unchanged. The Competizione’s front end reacts immediately to inputs, and no matter how hard I stress the front tires, the modestly weighted steering feels pure and consistent. Meanwhile, there’s a reactivity from the rear I didn’t initially expect from such a big car. It’s striking at first but soon feels natural, and the overriding sensation is of a car that shrinks and pivots instinctively around me.

DE SIMONE PICKS UP THE PACE some more. The Cup 2Rs are still a little cold, which leads to understeer at the limit, but once the 275-section front rubber heats up it grows talons. Now, this front-engine V12 simply carves into corners, any hint of front-end push forgotten.

As any professional racer can attest, the potential problem with a front end this planted is that the rear can often feel unstable—because something’s got to give first. But the Competizione simply settles securely into the meat of Fiorano’s Turn 2, then effortlessly flicks the other way, and again settles steadfastly into Turn 3 despite the abrupt direction change. It’s a testament to the suspension control, mechanical grip, and downforce all working in harmony. 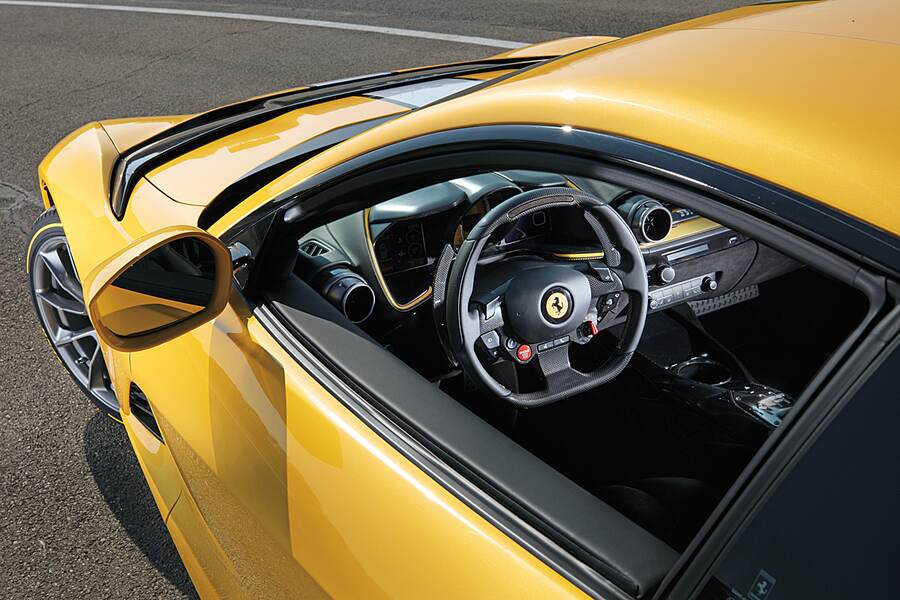 Even though this long left-hand corner’s far from over, de Simone is already easing away. This goads me into feeding in more power early, as much as it seems overambitious. The steering lightens, the rear end begins to tip-toe right on the edge of oversteer, and, as the acceleration builds, I feel as though I’m a piece of elastic stretched between the throttle stop and headrest. This is mighty traction for such a powerful front-engine, rear-drive car, and while the Cup 2Rs are clearly a crucial part of the equation, the dextrous, confidence-inspiring chassis deserves a good chunk of the credit.

Thanks to that sense of confidence, Race mode soon feels too keen to body check the Competizione’s fluid movements, so I twist the manettino to CT Off. This takes traction control out of the equation, slackening the leash so I can use progressive oversteer to play with the grip, adjust the car’s line, and get the wheels fizzing under power out of the corners, all while still enjoying the security of Side Slip Control (also updated, to version 7.0) to smooth out mistakes.

Driven like this, the Competizione is a beautifully balanced car, one that feels surprisingly light, pure, and delicately adjustable, especially for a big front-engine machine on the track. More important, for all the technological sorcery happening the shadows, it all feels so intuitive—and it’s when you can’t really sense things working that you know the engineers have nailed it.

My only gripes are a brake pedal that softens too quickly, despite just pushing for a handful of laps at a time, and the all-wheel steering becoming over-reactive when I smoke up the tires exiting the slow left-hand hairpin that Ferrari earmarks for such antics. It’s as though this sudden reflex catches out the Competizione, which prefers a more progressive approach. But what a sensational car, at least around Fiorano; we’ll have to wait to see how it translates to the road.

So where does the 812 Competizione fit in the grand history of Ferrari, the V12 engine, and the march toward electrification? When I chat with Chief Technology Officer Michael Leiters immediately after my drive, he sticks firmly to Ferrari’s line of not revealing whether this would be Maranello’s final non-hybrid V12, or indeed the final 812 variant. He would only say the company wants to keep the V12 alive for as long as possible and that his engineering team wasn’t leaving any stone unturned to achieve that. To be fair, Ferrari is pretty clear it won’t turbocharge the V12, and it already did a brilliant job of electrifying the LaFerrari years ago, so there’s little reason for concern on either count.

As for how that other way of pumping out 830 horsepower feels, we’ll find out early next year when we drive the 296 GTB. It will be much more affordable, yes, but it’ll need to deliver a pretty special driving experience to compete with the 812 Competizione. 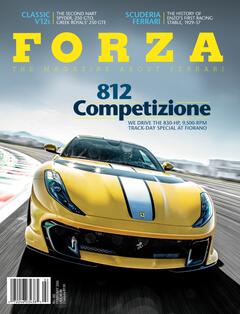