When his surgeon prescribed a Ferrari, Art Becker couldn’t say no. 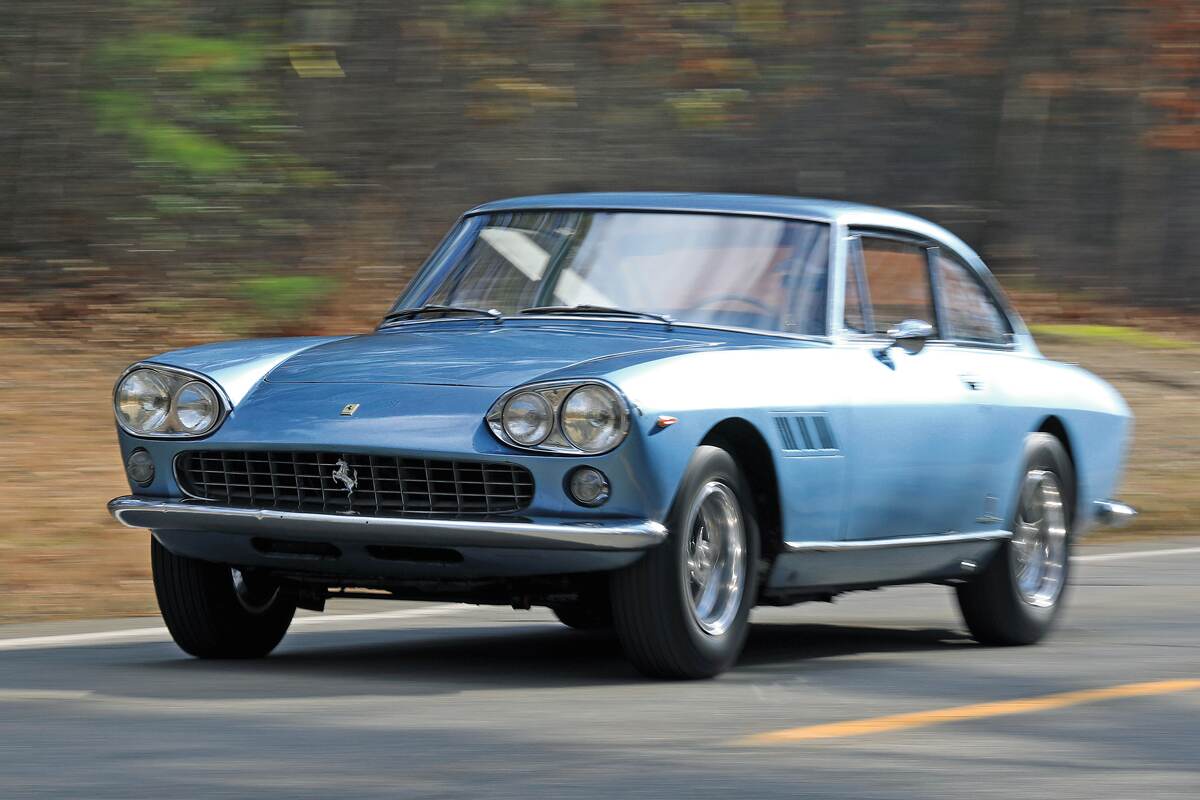 In recent years, at the local Ferrari shows in my part of the world, the parking lots are usually filled with modern mid-engine models. Aside from the occasional 360 Modena, for the most part F430s, 458s, and 488s rule. Or at least that was the script until last autumn, when the distinctive clatter and whirr of a vintage V12 engine caught the ears of the assembled multitude.

I spun around just in time to spot a pale blue four-headlight 330 GT 2+2 (s/n 7091GT) pull into the lot, its exhaust burble a refreshing change from the buzzy, frantic V8s. Like a moth to a flame, the crowd gathered to ogle the classic machine, which harkened back to the days of La Dolce Vita and conjured up visions of Anouk Aimée and Marcello Mastroianni cruising the Riviera’s bistro-lined roads as the sun set over the cobalt Mediterranean.

Rather than being a perfect specimen, however, the Ferrari wore what creative auctioneers call “a rich patina.” Its patina was rich, indeed: While the car seemed to be in impressively good shape in terms of body panels, gaps, glass, and interior, its paint certainly showed its age, much like a close-up photo of a past-her-prime diva.

The proud owner, a longtime car guy named Art Becker, told me he had driven up from the Jersey Shore to participate in the local Ferrari restoration shop’s road rally, run in conjunction with the Penn-Jersey Region of the Ferrari Club of America. Becker’s car affliction goes back many years and started with British cars: namely, a Bugeye Sprite and a pair of Austin Healeys, and continuing from there with a TVR Tuscan V8, an Aston Martin Vantage, and a Bentley GT. (There was also a Porsche 356 shoehorned in there along the way, so the 330 GT isn’t his only outlier.) 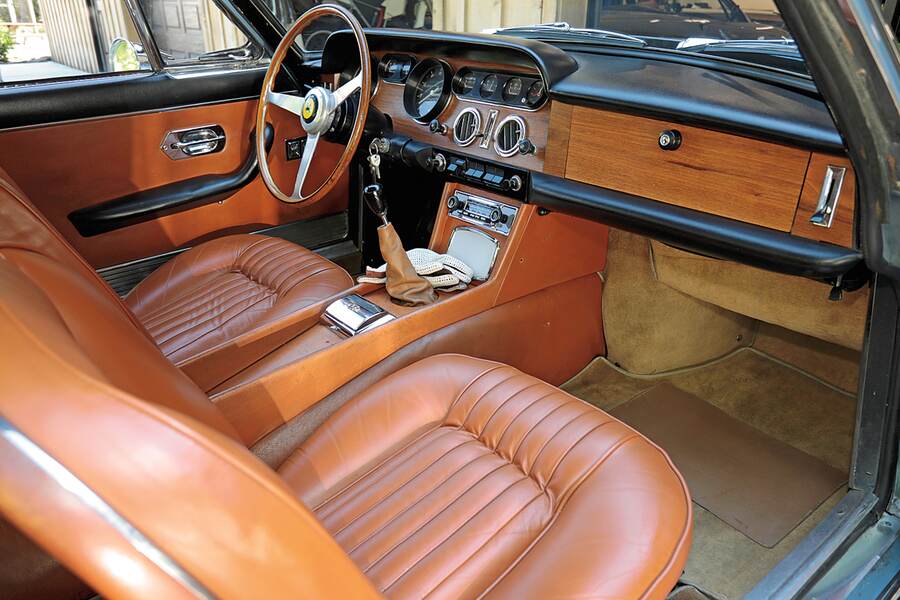 The Ferrari, it turns out, has a story all its own. According to Becker, his doctor told him to buy it to aid his recovery following cancer surgery.

In May 2016, Becker was diagnosed with pancreatic cancer. Rather than give in to the gloomy statistics, however, his surgeon, Ronald Matteotti, told him, simply and without drama, that he was going to make him well. According to Becker, only six percent of pancreatic cancer patients survive past five years—and since his own heavy-duty surgery occurred just over five years ago, it appears Matteotti, who regularly swung by the recovery suite to talk cars, Formula 1, and racing, was right!

After he was sure Becker was on the road to better health, the good doctor said he had one more prescription. But instead of more pills or injections, he told him, “Go buy yourself a Ferrari.”

Matteotti’s rationale was simple. As he told his patient, “Every time you drive one of these amazing cars, you will have a smile on your face.” While Becker was reluctant to “write a check that large” for a car, his wife and family loved the idea, so the search for a Ferrari began. 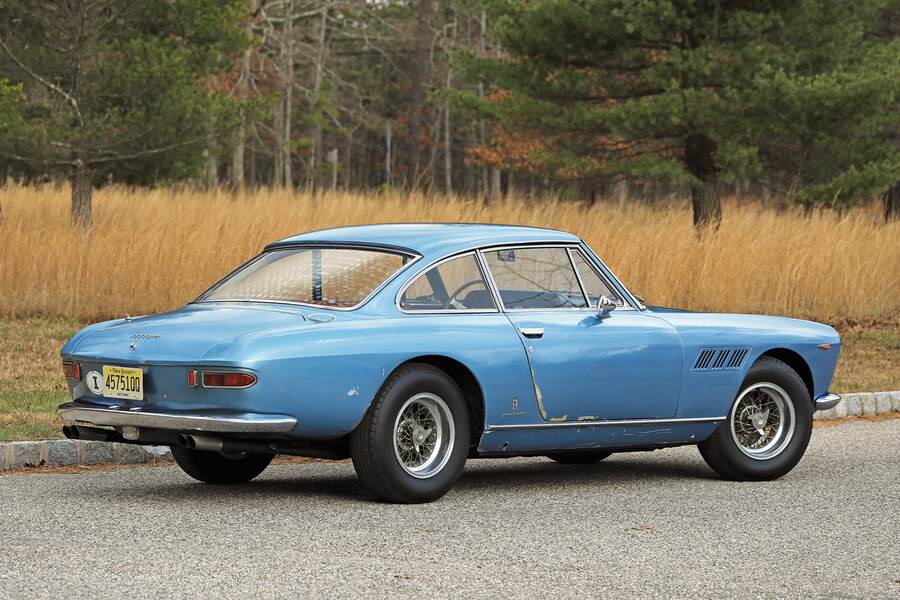 Despite all those British cars, Becker has always had a soft spot in his heart for Ferraris. In fact, he kept for more than 35 years an article he read on the 275 GTB, describing it as “the most beautiful car ever made.”

BECKER KNEW he wanted a civilized Ferrari, one that his wife would feel comfortable in. “I thought that a 430 or 458 would be way too aggressive for my wife to get in and go for a ride with me,” he recalls. In addition, since they live just a few miles from Long Beach Island, a narrow 18-mile spit of sand on the New Jersey coast, a convertible was in order. Eventually, a California 30 found its way to their home.

“It was red with lots of options and quilted seats,” Becker says—all things that he wanted and exactly what the doctor ordered. But there was more to come.

Becker worked in the environmental industry, and at an industry event in 2015 he got to talking with a car-guy friend who had just bought a 330 GT 2+2. Interestingly, the Ferrari was a bit of an oddity, being what Becker describes as an Interim example. Between the end of Series I production and the beginning of Series II production, there are reportedly 124 cars with Series I bodies and Series II mechanical upgrades, including five-speed transmissions and pedals mounted from above rather than sprouting from the floor. 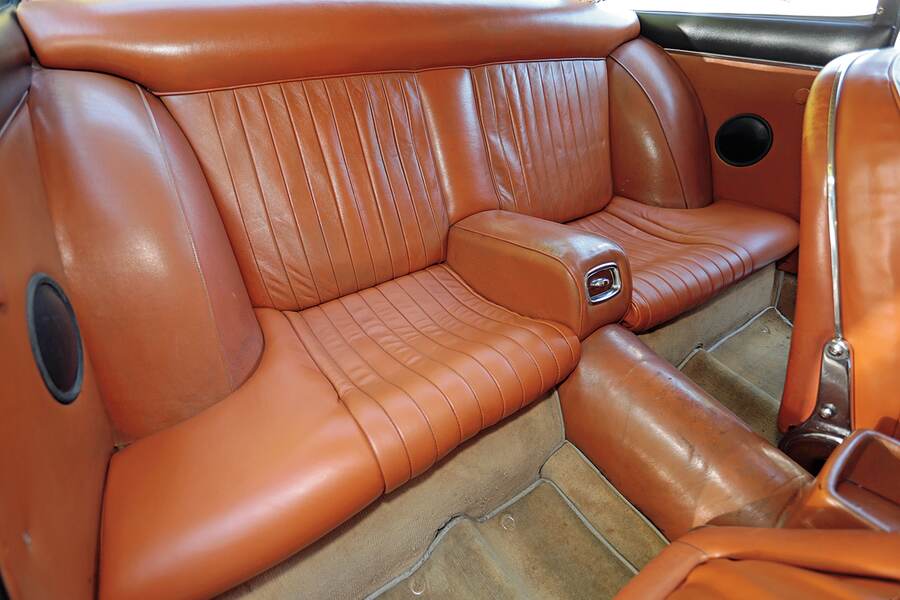 “That’s cool,” Becker told his friend, then added, “If you ever decide to sell it, let me know!”

That day wasn’t long in coming. One day, Becker drove his California over to his friend’s garage, where, just for fun, they swapped keys and they went for a drive.

“The sound, the whole ambiance, it was really cool,” he recalled of his first drive in s/n 7091.

Afterward, his friend suddenly announced he was thinking of thinning his automotive herd and auctioning off a few cars—including the 330 GT. A very surprised Becker was quick to remind him that, if he went the auction route, there would be fees and other things to consider, and then reaffirmed that he was really interested in buying the car. His friend replied, “Okay, think it over and tell me what you think it’s worth.” 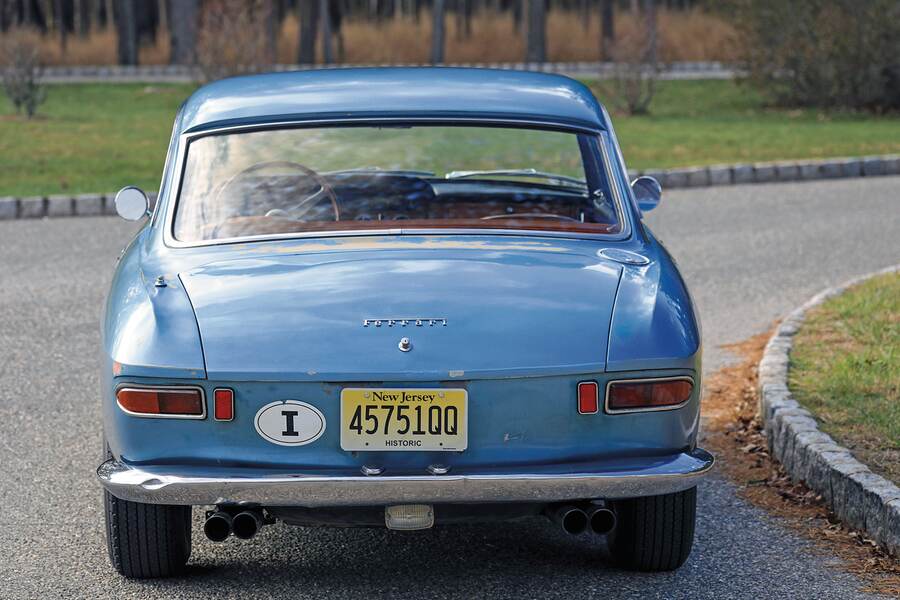 Becker quickly started researching the market for 330 GT 2+2s. He knew s/n 7091 needed a lot of work, so started with an offer that was lower than his friend wanted. But both buyer and seller were reasonable, and eventually they settled on a price that both were comfortable with.

The friend had one more surprise in store. After they agreed on a price, Becker asked if he could have the car gone over by a specialist so he could plan his next steps. But, he learned to his astonishment, the car was already on its way to his house!

After it arrived, the Ferrari was quickly sent to Scuderia Performante in Malvern, Pennsylvania to be gone over with a fine-tooth comb. Becker had been told the engine had been properly rebuilt, and his test drive confirmed that it ran like a Swiss watch, so he had no concerns there. However, Scuderia Performante sent him a report he described as “nine miles long” which was so thorough that it included a note that one of the two horn trumpets didn’t work.

“That’s not something I would have probably ever discovered on my own!” says Becker. 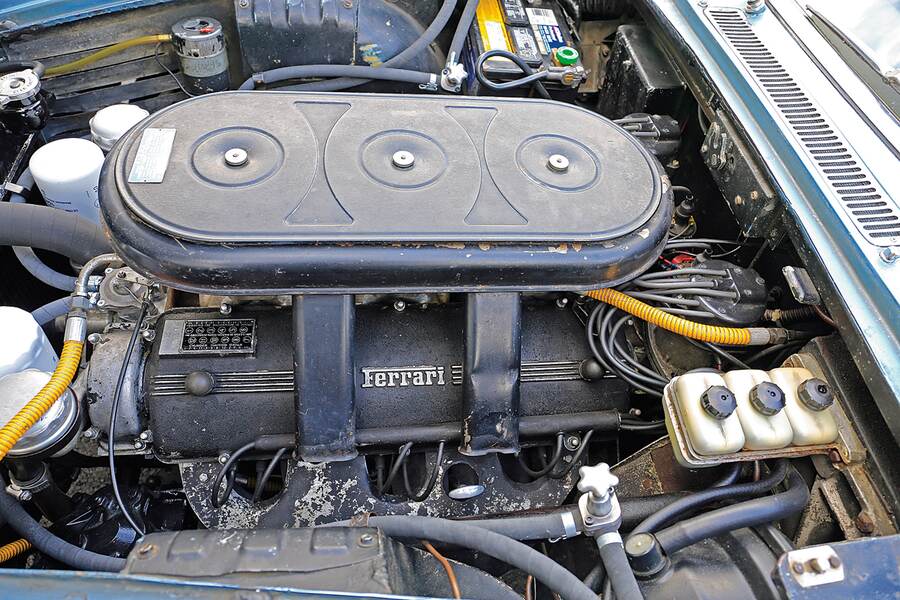 The shop’s biggest criticism was of the state of the car’s suspension. Becker has kept careful records on everything he has done on the 330 GT, and his notes on the suspension rehab reveal he put in more than 340 hours to get it sorted.

The shocks were sent out and rebuilt. He redid the decades-old bushings himself, even though it meant making a tool to keep the leaf springs separated and spread apart when they were out of the car. Becker admits that one bolt was so rusted in place he couldn’t save it—and not being able to reuse this original “from 1965” part because he had to cut it off still disappoints him.

“The car is all matching numbers,” he explains, “so I really like to keep it as original as possible.”

Beyond the suspension work, numerous other small challenges arose. For instance, when Becker received the car, there was an umbrella resting on the parcel shelf behind the rear seats. He soon realized it had been there for a long time; when he removed it, he discovered that the heat of the sunlight through the glass had stuck the umbrella to the vinyl, leaving a wrinkled mess. 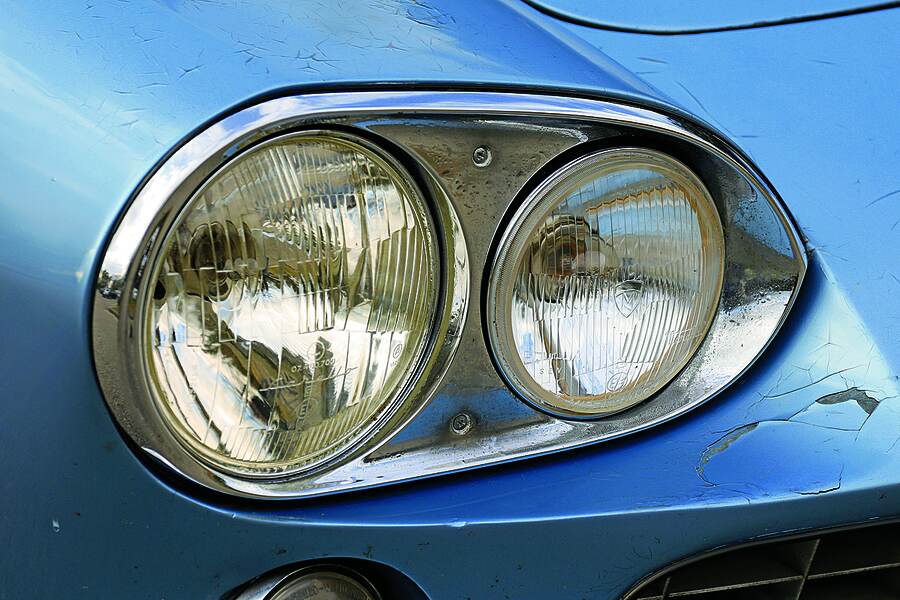 “I had some leather from when the seats had been recovered, so I decided to fix it myself,” Becker recalls.

He later discovered the car’s defroster fan didn’t work. His wife told him not to worry, that he’d never use it anyway, but that didn’t stop him from spending three days diagnosing why it didn’t run (corroded wires under the insulation) and then, when it did run, why it was making a weird noise (broken soldering on several fan blades).

“Now, when you flick the switch on the dashboard, it works perfectly,” Becker says proudly. “But my wife is right, I’ll never use it!”

The four headlights are an important feature of the car’s design, but two of the originals had been replaced with sealed-beam units—definitely not what Becker wanted. He sourced two new-old-stock replacements, which arrived in a box that had last been opened in 1965. The other two remaining original headlights were re-silvered by Steve’s Auto Restoration in Portland, Oregon. 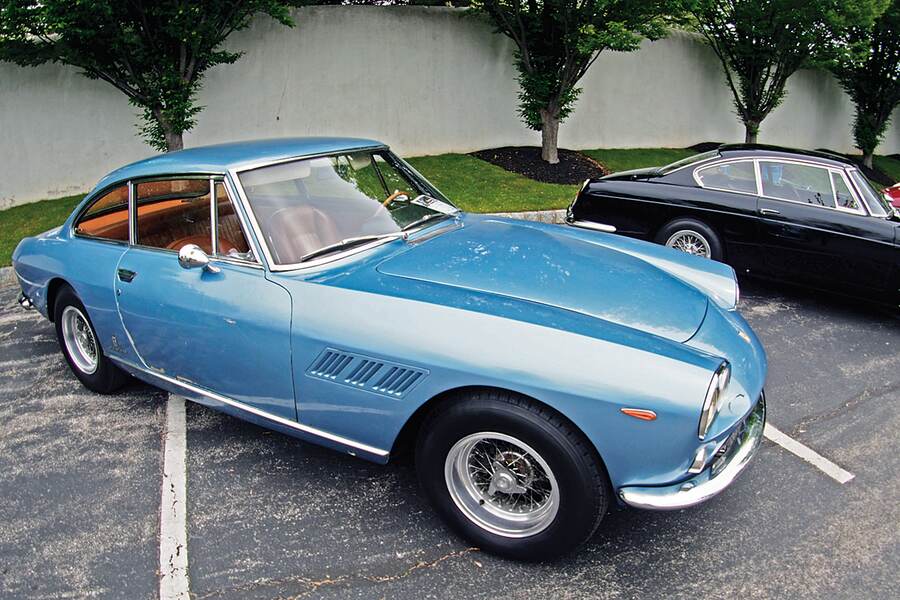 The usually modest Becker revealed the Ferrari’s emergency brake didn’t work, so he “fixed” it. When I dug for details, he admitted, more accurately, “I rebuilt the whole system.” Uncharacteristically, he then bragged that he might be the only person in the world who’s replaced a 330 GT’s motor mounts without pulling the engine, a feat he handled in his garage.

According to Becker, the only things that currently aren’t functional are the dash clock and the windshield washers. The windshield fluid pump actually works, but the plastic fluid bag is cracked, so he needs to source a replacement.

“I would like to get a used one,” he says. “I know that sounds weird, but that’s in keeping with the spirit of the car. It’s old, like me, and I like it that way.”

MANY YEARS AGO, one of my first assignments for FORZA was to organize a road test of four Ferrari 2+2s. [That would be “Four For the Road,” way back in our October 2004 issue, but Miliano was already a longtime contributor by that time; his first story appeared in FORZA #4, the Winter 1996 issue!—Ed.] The memory has never left me, so I was excited to renew that acquaintance when Becker offered me the keys to his car.

The V12 sparks to life easily then quickly settles to a soft murmur at idle. A smooth snick into first gear and we’re off. Becker’s work on the suspension has clearly paid dividends, since every winter-weather-fresh bump of the lumpy Garden State roads are absorbed without drama. The steering is surprisingly direct and linear—not something that’s always true on older Ferraris in my experience—and then there’s that V12. Enzo Ferrari famously said that aerodynamics are for people who can’t build engines, and this strong, smooth-running motor would definitely make Il Commendatore proud.

I’m not the only one who admires this Ferrari. Just before I submitted this story, I ran into Becker and his son at an FCA Regional concours in Pennsylvania. At the awards banquet, s/n 7091 received a Platinum award in the Preservation class.

That’s a fitting conclusion to this chapter in the lives of both owner and car. Becker gets philosophical when talking about the work he’s put into his Ferrari, which he drives at least once a week if there’s no snow or salt on the roads. “It’s like putting life back into the car,” he muses, “giving it another chance like my doctor did for me.” 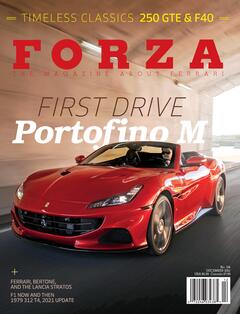