The Brave and the Bold

We follow a trio of vintage Ferraris around one of world’s tightest, least-forgiving circuits at the 2021 Grand Prix Monaco Historique. 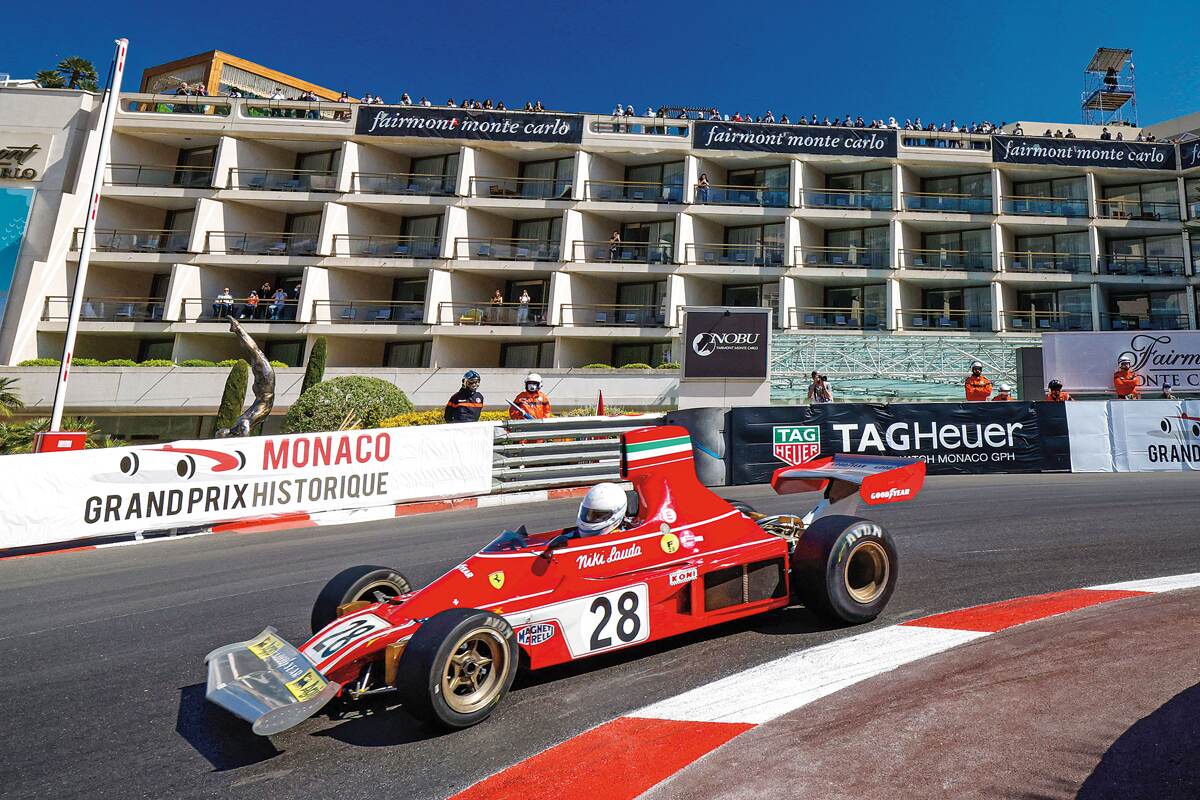 The Methusalem Racing Team supports a group of friends who love seeing their classic Ferrari Formula 1 race cars out on track, just like they were back in the glory days. In mid-May, for the 2021 edition of the Monaco Historic Grand Prix, Methusalem, which is based in Germany, brought three such stunning, expensive, museum-worthy cars—a ’69 312 and two ’73 312 Bs—to the twisting streets of the tiny principality.

And if you have such special cars and are going to race them on such a special circuit, it’s only proper to invite some of the great drivers of yesteryear to sit behind their wheels. Which is where former F1 pilots Jean Alesi, Rene Arnoux, and Alex Caffi come into the story.

But before we get to racing itself, says Methusalem sports manager Achim Stroth, it’s important to note just getting these cars into track-ready condition is a challenge many other owners would balk at. 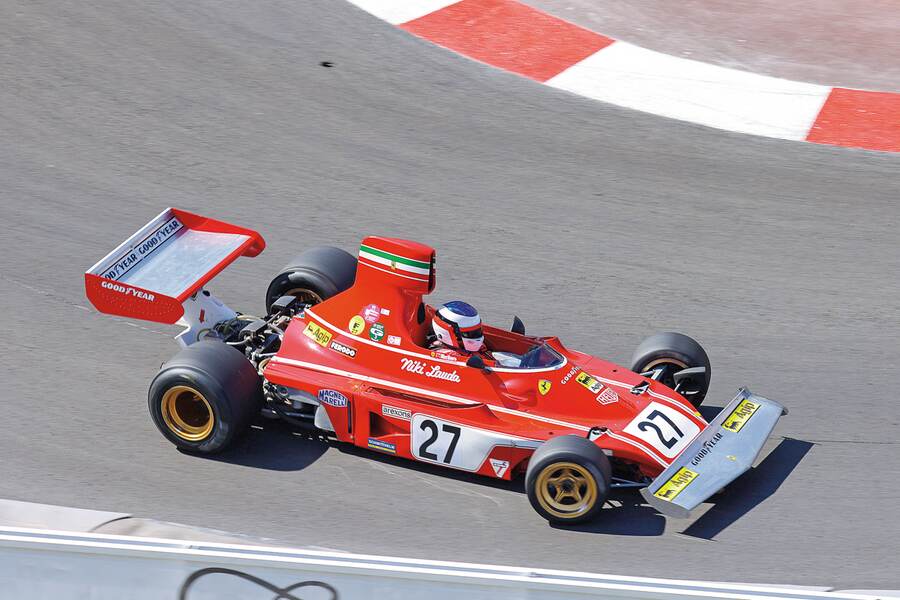 “A half-century ago, maybe just two of these cars existed, with different changes for weight saving, performance, and reliability made maybe every race, so getting replacement parts is quite a challenge,” Stroth describes. “Germans finding ways to have technical discussions with a community of elderly Italian engineers is the first challenge, but you also have to find someone who was in the Ferrari engine department in the 1970s, or an apprentice he taught, who still knows how to make a camshaft or injectors for a 50-year-old 3-liter flat-12. No one ever wrote a book about how to restore a ’69 Spaghetti!”

Stroth is referring to Methusalem’s 312 (s/n 017), specifically its artwork-worthy arrangement of top-mounted exhaust pipes, also known to fans as the snake pit. Far from simply an aesthetic arrangement, the exotic design features equal-length piping, necessary so that each cylinder’s exhaust pulses work in tandem with the rest, rather than interfering with the peaks and troughs of pressure.

With F1’s first aerodynamic wings appearing in 1968, the ’69 312 is considered a crossover into the modern era of aerodynamics—even though these early wings only helped control airflow, rather than pushing the car toward the ground. But while Ferrari designer Mauro Forghieri’s new bodywork was ground-breaking, the reliability of the car wasn’t. Although New Zealand racer Chris Amon always qualified well during the 1969 season, he only saw the podium once, taking s/n 017 to a third-place finish at the Dutch GP. 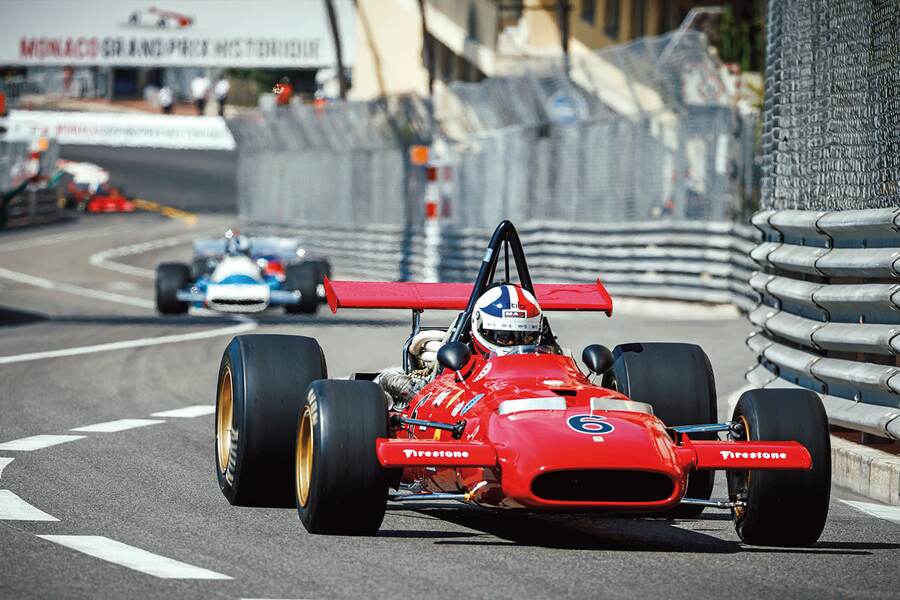 Amon, in Forghieri’s opinion, was one of the best and most capable drivers he ever worked with, but he was also famous for his bad luck. Mario Andretti once joked that if Amon became an undertaker, people would stop dying. That legendary poor fortune reappeared in Saturday’s qualifying session, this time with driver Alex Caffi.

Unlike Alesi and Arnoux, Caffi never drove for Scuderia Ferrari. Instead, he raced with several small Italian teams, namely Osella, Scuderia Italia, and the luckless Andrea Moda. Caffi’s historic racing career has been more successful, including a win at the 2016 Monaco Historic GP behind the wheel of an Ensign, but he wouldn’t be repeating that feat in 2021, however. While behind the wheel of the ex-Amon Ferrari, Caffi misjudged the speed of a Cooper at Sainte Devote and slammed into it, heavily damaging his car’s radiator, oil cooler, and nose cone, and leaving the team slightly less than impressed.

For his part, Stroth sided more with the Cooper’s driver than his own. “There is a simple rule that if you are the faster driver, it is up to you to choose where and how to pass,” he notes. “The Cooper driver might have been going a lot slower, but he cannot be blamed for his existence!” 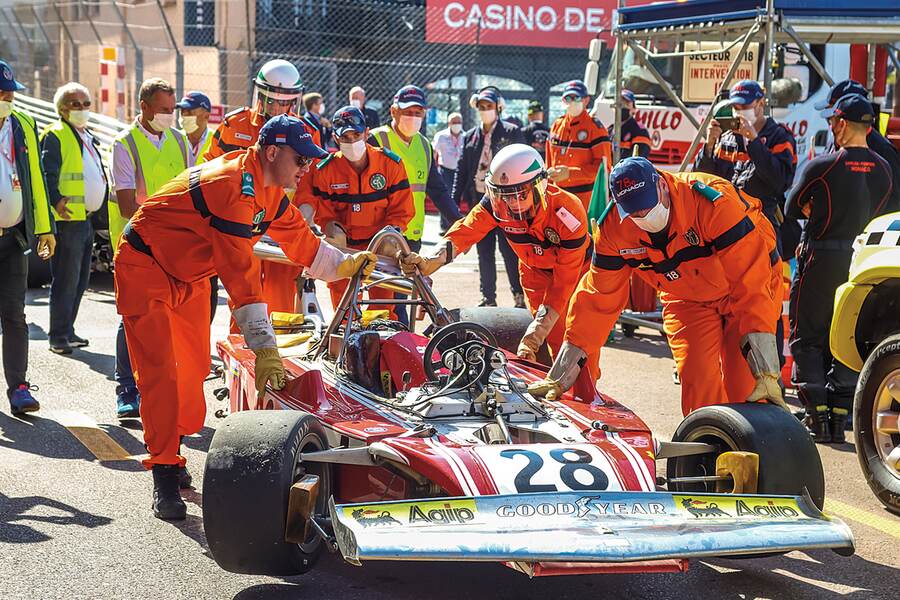 Rene Arnoux drove this 312 B at Monaco, but ended up in a wall after hitting oil on track.

Methusalem owns an impressive stockroom of parts and considered shipping some down to Monte Carlo overnight to get s/n 017 back on track. Ultimately, the team decided not to.

“Back in 1969 the cars were changing almost every week, with a little upgrade here, a new part there, all without modern-day documentation,” explains Stroth. “So there can be no guarantee that another oil cooler would be a perfect fit.”

Instead, the team sensibly decided to give its rebuilt car a proper test on a track lined with sand traps and runoff areas, a much better idea than sending a quickly fixed car back between the Monaco barriers with their fingers crossed. 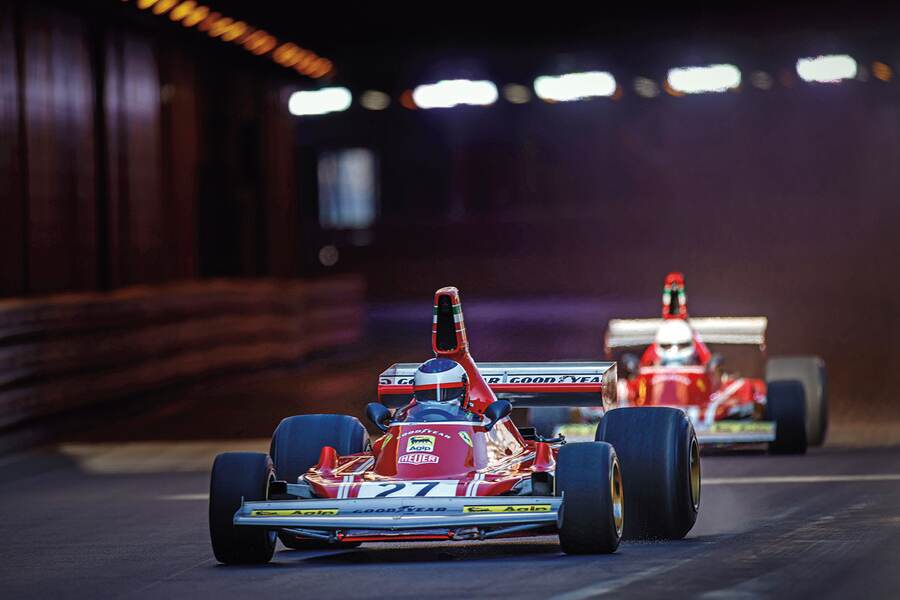 Jean Alesi led his race in this 312 B before being punted off by another driver.

JACKY ICKX DROVE Methusalem’s second car, a 312 B3 (s/n 010), during the 1973 season, earning a best result of fifth place at the French GP. But at the 1974 Race of Champions, a non-championship F1 and F5000 event held at Brands Hatch, s/n 010 was driven by new Ferrari recruit Niki Lauda to second place, just 1.5 seconds behind the race winner—the recently departed Ickx.

Used as Clay Regazzoni’s spare and practice car in the spring of ’74, s/n 10 was returned to Lauda’s hands for the Monaco GP. There, after starting from pole position, the car retired around half distance with an electrical issue.

At this year’s Monaco Historic GP, the Ferrari was driven by Rene Arnoux. At 72 years old, Arnoux was the oldest of Methusalem’s trio of drivers, as well as its most successful. Three wins in 1983 put him solidly in contention for the championship at the final round in South Africa, but an unfortunate DNF saw him finish third in the standings. However, Arnoux and teammate Patrick Tambay helped Ferrari win that year’s constructor’s championship, a feat the Scuderia would not repeat until 1999. 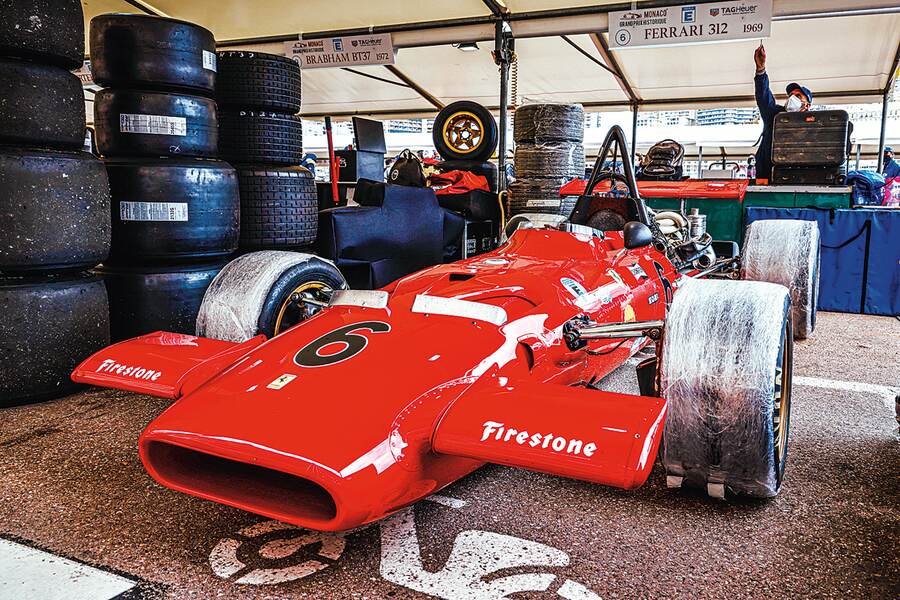 Like Caffi, Arnoux endured an ignominious race in Monte Carlo, one that ended in the barriers at Tabac with a rear wheel torn off and rolling down the track. “These old cars lose oil, it’s just the way it always was,” Stroth says. “Arnoux found some on the racing line and the car snapped away from him. And like any little mistake at Monaco, he was in the barriers before he’d had time to react. Just a racing incident.”

Luckily, the repair won’t be a major undertaking. Stroth expects the car will be seen again soon.

METHUSALEM’S FINAL FERRARI was a second 312 B (s/n 012), which was first raced in period by Arturo Merzario. Although he enjoyed much success in Ferrari’s sports racers, Merzario lasted only one uncompetitive season with its F1 team. (He’s perhaps best known in Grand Prix history as one of the men who stopped to help extract Lauda from his fiery wreck at the Nürburgring in 1976.) But in 1974, Lauda drove s/n 012 to three second-place finishes—in Argentina, Belgium, and France—helping him to take fourth in that year’s championship. 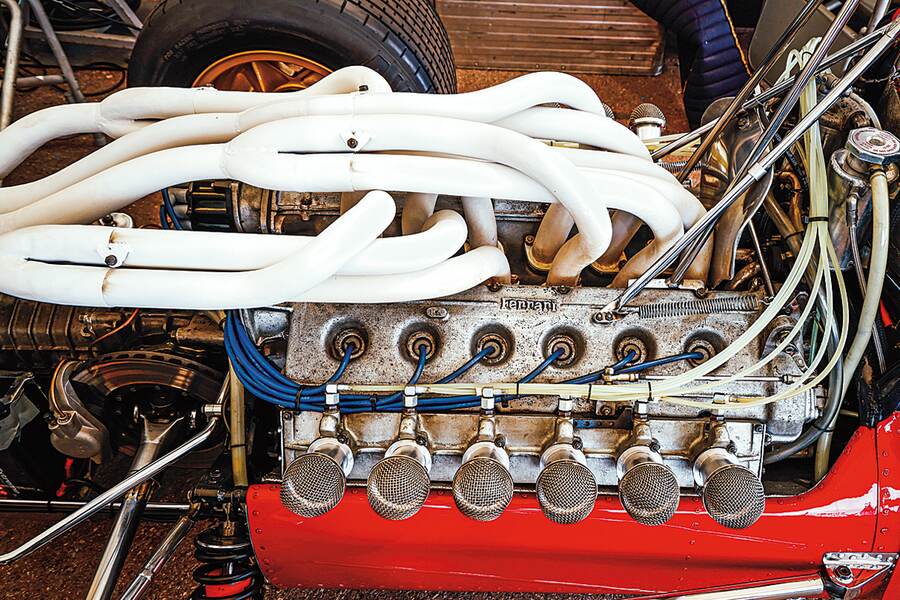 ’69 312 features an impressive tangle of exhaust pipes atop its flat-12 engine.

In Monaco, s/n 012 was handed over to Jean Alesi, the well-loved Frenchman who famously scored his lone F1 victory with Ferrari at the 1995 Canadian GP. The now 56-year-old Alesi needs no introduction to the tifosi and put on a show to make them proud.

After lining up second next to polesitter (and three-time Le Mans winner) Marco Werner, Alesi got a better start and led into the first corner. From that point on, we were treated to some top-class racing, watching cars nearly a half-century old in modern hi-def.

Both cars slid around, with Werner, who was 2 seconds faster in qualifying in his ex-Jackie Stewart Lotus, trying everything he could to get past—it was reminiscent of the battle between Ayrton Senna and Nigel Mansell in 1992—but Alesi, with 201 Grand Prix starts to his credit, knew just how to place his car to defend. The Lotus had more low-end grunt coming out of the corners, but the high-revving Ferrari had a higher top speed. 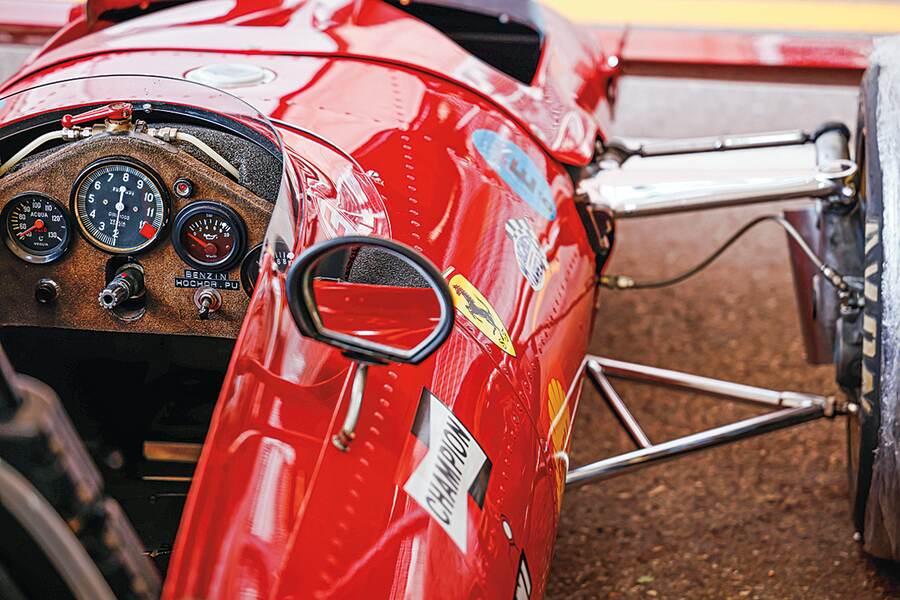 After a heart-stoppingly close call with an ex-Tom Pryce Shadow, it became clear Werner was trying a bit too hard. Unseen by the cameras, he had already tapped Alesi a few times, which is certainly no way to treat such a fantastic piece of history, no matter how much you want to win the race. Then, as they came up to cross the start-finish line with two laps to go, Alesi was pitched into the pit wall.

Most onlookers assumed that Alesi had missed a gear and Werner had run into the back of him. But Stroth, who was standing with the pit board right next to the cars, thinks otherwise.

“Alesi had already been hit a couple of times before that and assured the team that he didn’t miss a gear or have any other trouble that caused him to slow,” he says. “And so we can only assume that Werner intentionally tapped him out of the way. And it seems that the stewards, whose penalty dropped him to an unwanted third on the podium, made the right decision.”

The damage to the ex-Merzario Ferrari was quite severe; all of the right side suspension would need to be replaced, as would both wings. Pragmatically, Stroth is happy that Alesi had the wherewithal to control the car, even mid-accident, to keep it against the wall and avoid being collected by the following car, which would have caused much more damage.

Focusing on the positive, Stroth says he’s glad the team showed that the vintage Ferraris are still competitive. While the owners left with mixed feelings, their special cars will be back on track soon. 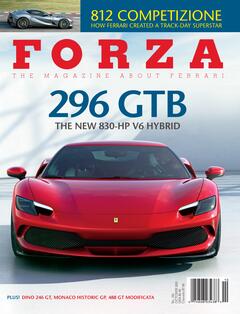