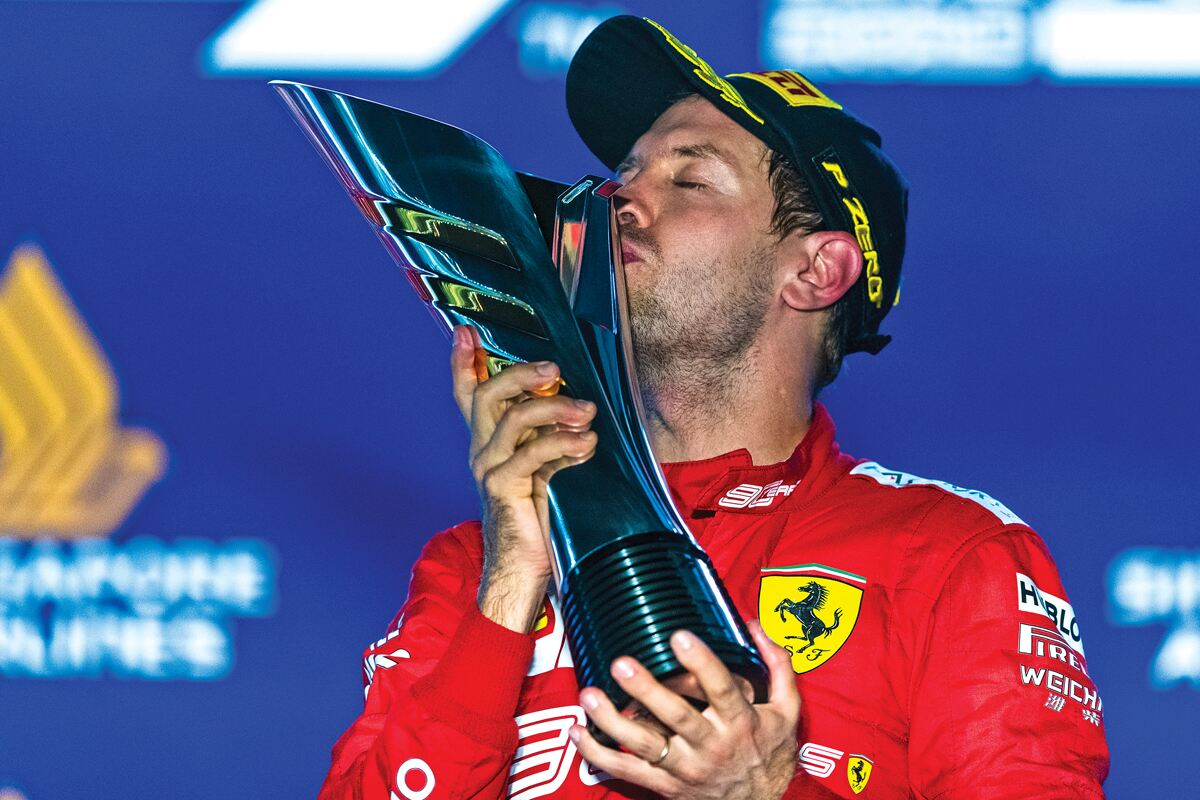 Although the Ferraris finished ninth and 13th in the 2020 Abu Dhabi Grand Prix, a disappointing but expected end to the season, there was still reason for good cheer. It was time for the Scuderia to thank and send off the departing Sebastian Vettel. While the four-time World Champion may have fallen afoul of the team’s management, Ferrari’s third-most successful driver, who raced in red 118 times and won 14 Grands Prix, remained steady friends with the engineers, mechanics, and rest of the crew.

Their journey together began in late 2014, when Ferrari announced the boyish-looking 27-year-old would replace the departing Fernando Alonso. Sebastian had suffered a significant slump that season at Red Bull, but his stock was still high and his spirit remained strong.

“When I was a kid, Michael Schumacher in the red car was my greatest idol,” said Vettel. “It’s an incredible honor to get the chance to drive a Ferrari.”

The driver quickly found a home in Maranello. Credit must go to his bright, friendly nature, sense of humor, and the fact that he already spoke Italian—a legacy of his time with Red Bull junior team Toro Rosso. His win with Toro Rosso in the pouring rain at Monza in 2008 also endeared him to the team, which hoped to put the strain of the disintegrating relationship with Alonso behind it.

Vettel’s tenure started strongly, with the German finishing second in the first race of the 2015 season, in Australia, then winning the second, in Malaysia.

“It’s not only one childhood dream that becomes true, it seems to be many dreams together,” said Sebastian in Sepang. “Since I joined Ferrari I felt incredibly welcome, and together we have worked to improve things. This is a special day; it has been a while since both I and the team won.”

There would be two more victories that season, and Vettel finished the year third in the driver’s standings, with Ferrari second in constructor’s points. Mercedes and Lewis Hamilton clinched both World Championships, but after the final race in Abu Dhabi Sebastian was all smiles. 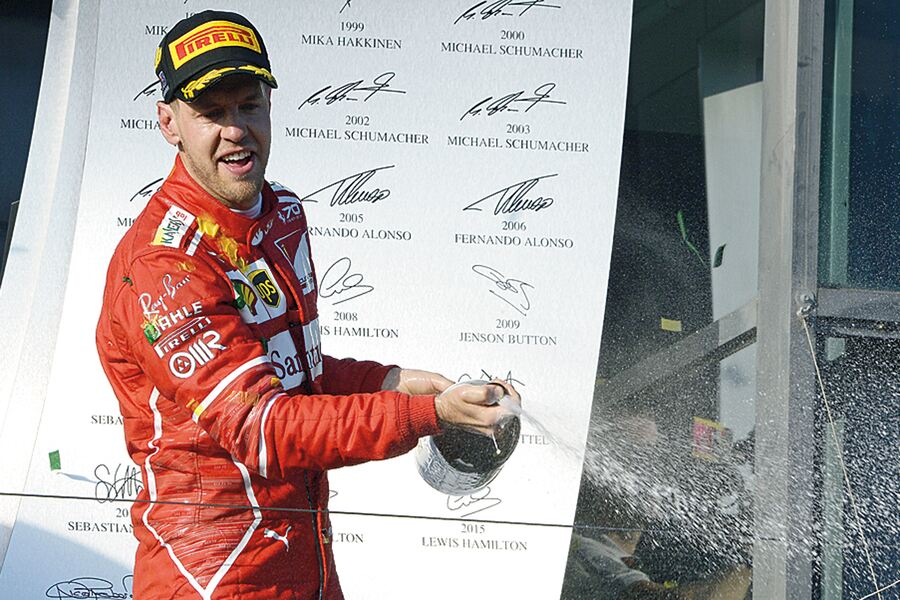 “I think we can be very happy for this season,” he said. “Of course the last step to catch the Mercedes will also be the hardest one, but if you think about where we were only one year ago, this has been a miracle season. I’m very happy to have joined the team in this moment and to have had an opening year with Ferrari like I had. Hopefully we’ll have many more good ones coming.”

The 2016 season would not be one of the good ones. Although he finished on the podium seven times, Vettel failed to win a race. Worse, both the driver and his team were overtaken in the standings by Ricciardo and Red Bull. Still, the Scuderia stayed strong in the face of adversity.

“I think we expected more, but after the first half of the season, where we could have scored more points, I think we showed real strength by coming back,” Sebastian said. “Overall, we showed the stamina that the team has. The spirit is unbroken, and I know that we will work hard, because Ferrari deserves to come back.”

And come back it did, in 2017. Fastest in pre-season testing, Ferrari faced Mercedes on near-equal terms when the racing began. Vettel won four times in the run up to the summer break, the same number as Hamilton, and finished on the podium in most other races. But if the driver appeared to be on the ascendant, a strange incident in Azerbaijan a few races before the break suggested the stresses he was under.

Approaching a low-speed corner behind a Safety Car, second-place Vettel ran into the back of race-leader Hamilton. Infuriated and believing Lewis had brake-checked him, Sebastian accelerated and pulled alongside the Mercedes, gesticulating his anger then jerking the wheel and running into his opponent. It was a shocking maneuver for any racer, let alone a four-time World Champion, and it left most fans’ mouths agape.

Vettel admitted responsibility and apologized the next day: “With hindsight, I don’t believe [Hamilton] had any bad intentions. In the heat of the action I then overreacted, and therefore I want to apologize to Lewis directly, as well as to all the people who were watching the race. I love this sport and I am determined to represent it in a way that can be an example for future generations.”

By the time racing resumed in late August, Ferrari appeared to have lost its momentum. In the second section of the season, Vettel won only one race to Hamilton’s five, although he still managed to again finish second in the championship. 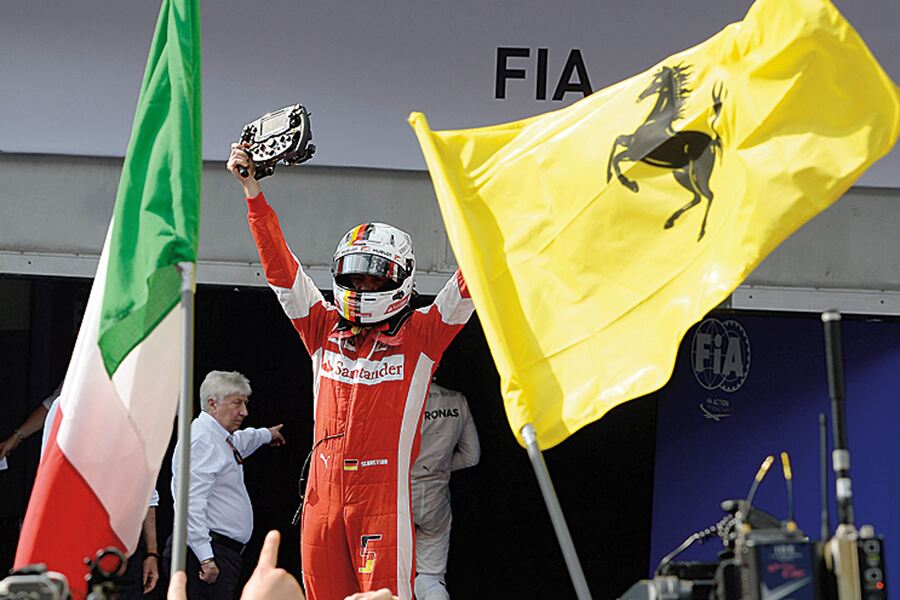 “Given where we started from last year, this season we have taken giant strides forward,” reflected company CEO Sergio Marchionne. “Having said that, the second half of 2017 was character building. We learned a lot over the past six months, trying to move forward, and that’s the most important thing. The important thing is to start 2018 with all this expertise and experience and to manage this organization. I have no doubt that we will be competitive.

“Sebastian Vettel is a guy who studies a lot, studies himself, and is committed; therefore, I think that we will see less of his emotive side,” added Marchionne. “I think he has learned enough. Plus, there were plenty of opportunities for him to get annoyed, as he’s had a couple of rather difficult seasons.”

2018 began as Marchionne hoped, with Vettel winning the first two races. By the summer break, he had scored four wins to Hamilton’s five, and the tifosi dared to believe their beloved team could break Mercedes’ stranglehold. Once again, however, after the break the momentum swung the other way, with Vettel and Raikkonen each winning one race to Hamilton’s six.

Furthermore, Vettel had again blotted his copybook earlier in the season, crashing out of the lead at a wet Hockenheim. “The mistake was a little mistake but a huge outcome and a huge penalty,” he recalled recently, “but there were definitely more things happening [that year]. Obviously we had the passing of Marchionne, so maybe it was a decisive year for many things.”

Nonetheless, it was Ferrari’s best season in the turbo-hybrid era, with the team finishing second in the standings, and Vettel second followed by Raikkonen in the driver’s title chase. Sebastian also finished the Abu Dhabi finale in second place, and said afterward, “I think today’s race sums up the year pretty well: a few ups and downs, and in the end just being close, but not close enough.”

That was also the view of Ferrari executives, who in early 2019 dropped team boss Maurizio Arrivabene in favor of technical director Mattia Binotto. Binotto had been with the company for 25 years, and it was hoped his extensive experience would help him refocus the team and bring up to speed new recruit Charles Leclerc, who had replaced Raikkonen.

Unfortunately, things did not go to plan, with Ferrari lacking its pre-season pace of the past two years and not being in contention for wins until mid-season, although both Leclerc and Vettel scored multiple podiums. Worse for the veteran, it was Leclerc who took the team’s first two wins, at the high-speed Spa-Francorchamps and Monza, where the car could exploit its power advantage, although Vettel showed his mettle by winning on Singapore’s street circuit. 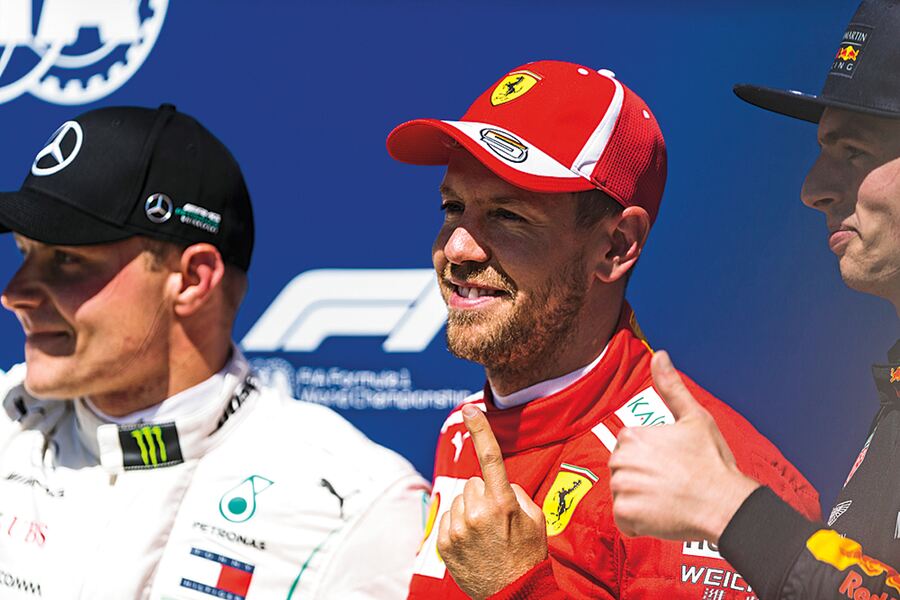 Still, the German continued to make mistakes, such as spinning out of the lead in Canada while being hotly pursued by Hamilton, then spinning while being passed by his rival during Ferrari’s home race at Monza. Even worse, the two Ferraris collided in Brazil, causing a double DNF, a cardinal sin for which Vettel was to blame.

The team itself began to struggle as well, with poor strategy calls and pit stops affecting several races. At the end of the year, Ferrari was once again second in the standings, but its fastest driver had fallen to fourth—and that driver was Leclerc, not Vettel.

“All in all, we didn’t have the year that we were hoping for,” Sebastian admitted. “The reasons are clear and lessons have been learned, so now we just have to take them on board. This year has not been ideal from my side, even if I don’t think it was as bad as it looks. I know I can do better, that is for sure the target for next year, to make a step forward.”

Today, as we know, Vettel’s prayers were not answered. In February 2020, the FIA announced that it had reached a secret settlement with Ferrari about the legality of its 2019 power unit. Several rivals had raised suspicions late in the year, which in turn led to a series of technical rulings from the sport’s organizing body. As a result, Ferrari’s 2020 car was far down on power and painfully slow in pre-season testing. Once the season finally began in Austria in July, it didn’t take long to realize that Ferrari was no longer in contention for wins, let alone one of the sport’s top three teams.

The situation was even worse for Vettel, who not only was told before the season began that his contract would not be renewed, but found himself falling further and further behind his young teammate, who had just been signed to a five-year deal. For the first time in his Ferrari career, Sebastian regularly failed to progress to the final round of qualifying and thus regularly failed to finish in the points.

Through it all, however, Vettel remained true to himself. This was never more clear than when he congratulated Hamilton for winning his seventh World Championship: “I told him that it’s very special for us because we can witness history being made today. I think he is the greatest of our era.”

After his final race, Vettel even praised the young man who effectively ousted him from Ferrari: “To Charles, you are the most talented driver I came across in 15 years of F1,” he posted online.

In 2021, Vettel will take up a new challenge with Aston Martin. It remains to be seen if it will be the Sebastian of 2017 or the Sebastian of 2020 who climbs into the car this year, but there is no doubt the gratitude of the tifosi will follow him. 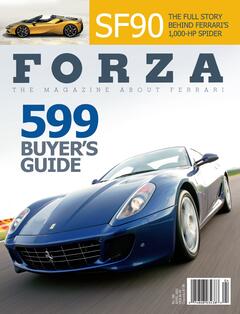