The Superfast platform isn’t new, but there’s never been a front-engine convertible that feels like the 812 GTS. 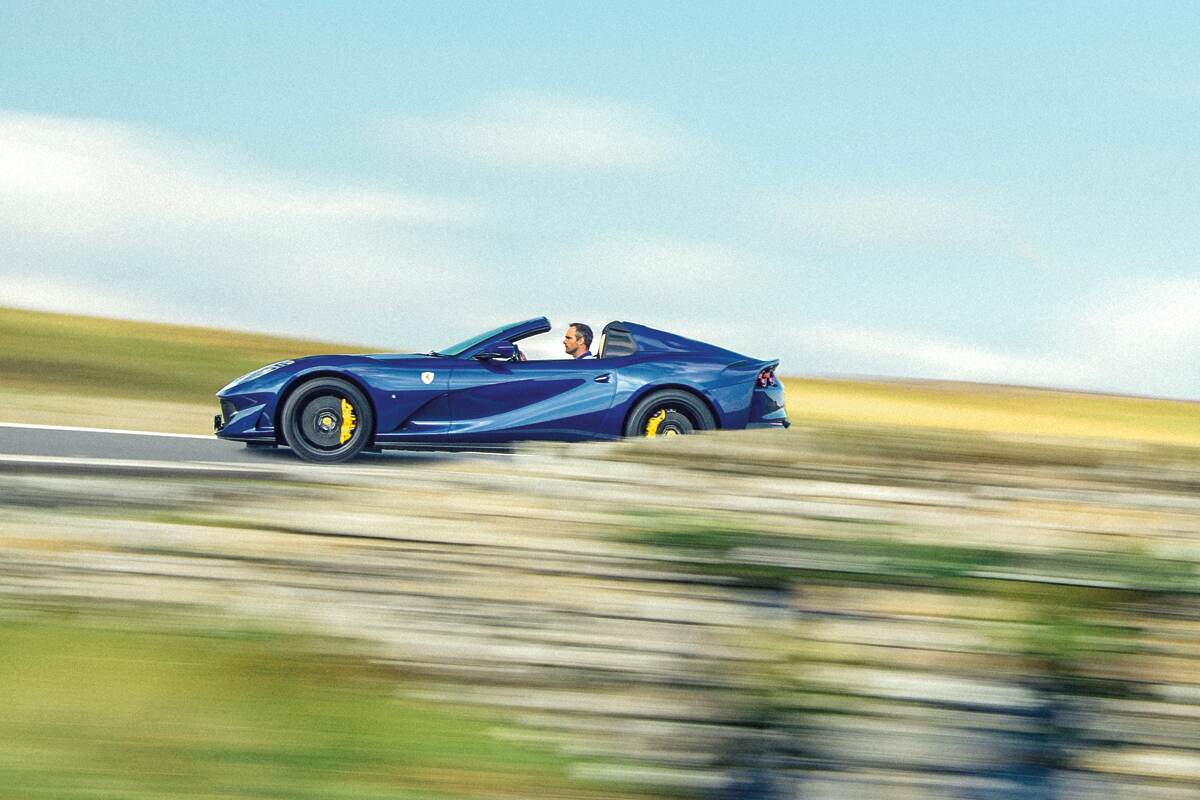 Ask Ferrari where the bloodline of this new 812 GTS begins, and it directs you to the 166 MM Barchetta of 1948—essentially a chunk of precision V12 engine clothed in an elegant body that was outsourced to Carrozzeria Touring. Never mind design, the V12 engine has defined Ferrari from its very earliest days.

It’s appropriate, then, that Ferrari should be one of the last remaining automakers still producing a naturally aspirated V12. And not just preserving it like some mechanical loom at a dusty old living-history museum, but endlessly chipping away at its potential, continually raising the bar rather than letting it settle into a Sebastian Vettel-style career trajectory.

Oddly, though, Ferrari has mostly kept enthusiasts from experiencing the full intensity of its modern-day V12s when it comes to lowering the roof. In this century, there have been limited-edition drop-top versions of the 550 and 575M Maranello, 599 GTB Fiorano, and F12berlinetta, but no series-production convertibles whatsoever—indeed, since the Daytona Spyder, which first rolled out of Maranello in 1969. 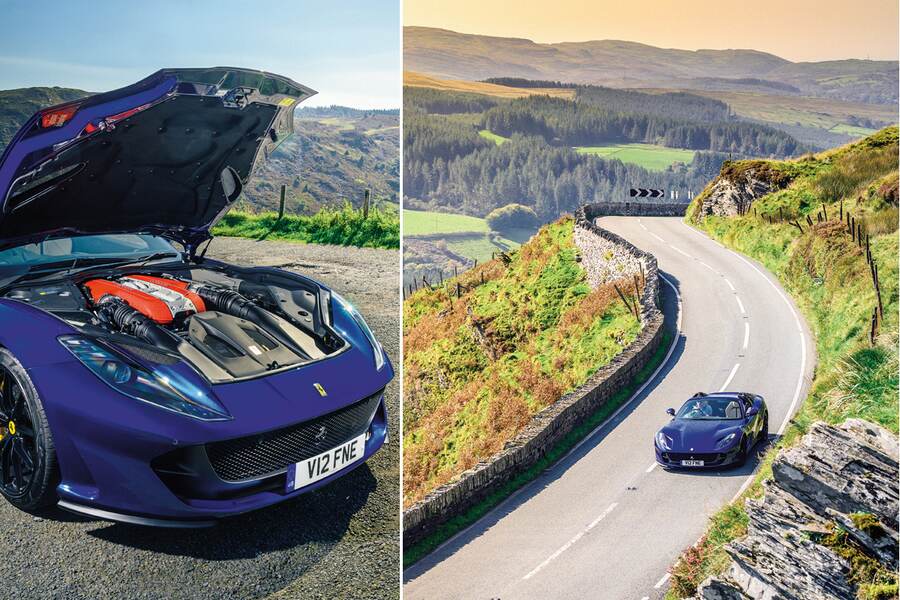 The 812 GTS isn’t exactly one for the proletariat, but it does address that omission. For the first time in more than 50 years, Ferrari has built a regular-production two-seat convertible with a front-mounted V12, this time based on the 812 Superfast and suffixed with the familiar Gran Turismo Spider initials.

It takes only the few seconds needed to drop the folding aluminum hardtop (alternately, you can lower the neat vertical pane of glass behind the seats, which doubles as a windblocker) to understand the appeal. Stand on the gas and you’ll feel like the wax has been blown out of your ears: The noise is downright ferocious, a  whipcrack response rasping through the four exhaust tips that makes my neck hairs stand to attention. Both the snap of the gear shifts and the engine’s searing aggression at high revs are sharpened as well, amplified to a new level of intensity. The experience brings home not only the trades we’ve accepted with downsizing and turbocharging, but also of Formula 1’s turbo-hybrid era. This engine sounds sensational.

The source of this incendiary noise is familiar. It’s a 6.5-liter version of the F140 unit first slotted into the Enzo in 2002 that’s been evolving ever since. Compared with the 740-hp engine found in the preceeding F12, the GTS’s V12 boasts a longer stroke, 350-bar direct injection, revised control of variable-geometry inlet tracts, a compression ratio upped just a fraction to 13.6:1, and a shrieky peak engine speed of 8,900 rpm. The 812’s dual-clutch gearbox ratios are also six percent shorter, just in case anyone’s drumming their fingers waiting for the 800-hp V12 to wake up. 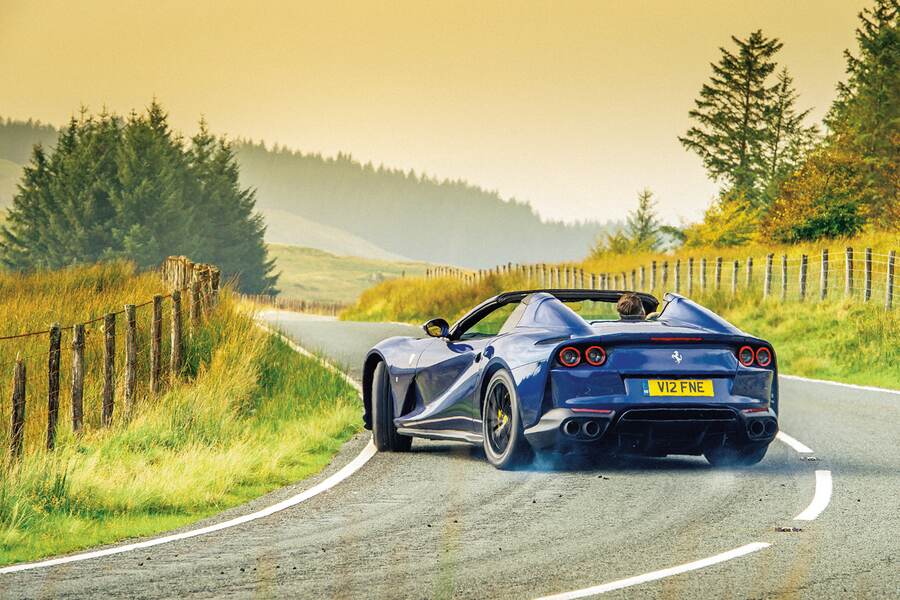 With electronic driver’s aids turned off, 812 GTS easily lights up its rear tires—but this front-engine V12 is a much more challenging machine to slide smoothly than the mid-engine F8.

All of this is familiar from the 812 Superfast, and that’s no slight. What it means is that no one, not even rivals who can simply turn up the boost on their turbocharged engines, makes a more powerful Spider.

The stuff that differentiates an 812 GTS from a Superfast really relates the body. Look closely and you might notice the vent in the rear wheel arch is missing and that the rear diffuser has been modified to aerodynamically compensate for the bodywork changes. Naturally, the biggest alterations have been made to the roof, where the folding hardtop and new buttresses flow down into a redesigned rear deck.

When I press the appropriate button, that rear deck opens up and the retractable roof rotates and disappears into the trunk in just 14 seconds (at speeds up to 28 mph). The result is an elegant transformation—arguably more so than with the fussier F8 Spider—as the GTS looks equally well balanced with the roof up or down, simply because the difference is basically a small chunk of roof in the middle, much like a targa top. 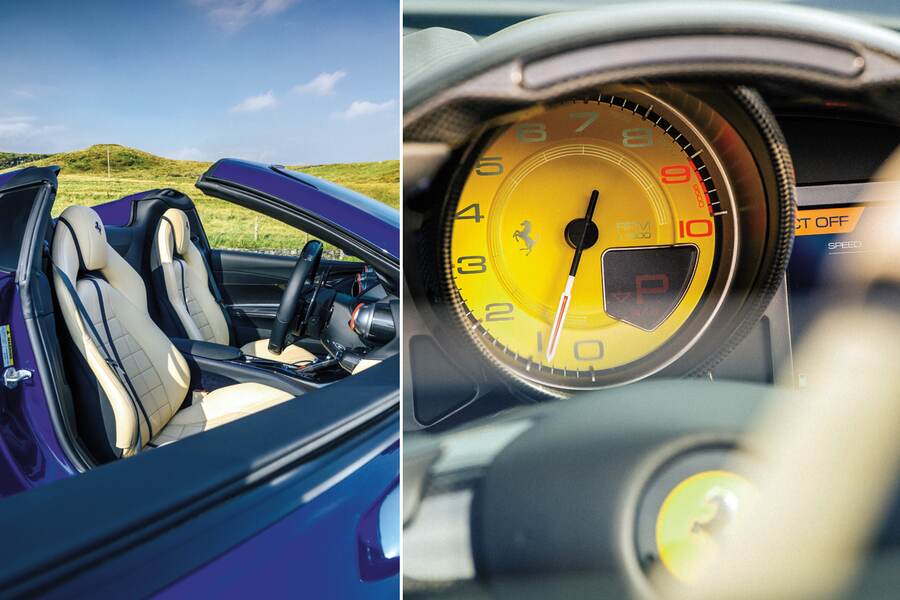 I drove the 812 GTS roof down pretty much everywhere, at freeway speeds and in poor weather, and the overwhelming sensation was of sitting in a bubble of calm as the elements swirled around outside. The serenity is apparently helped by two L-shaped flaps on the upper corners of the windshield frame, just like on the LaFerrari Aperta.

Roof open or closed, the GTS offers the same amount of trunk space as the Superfast—not a huge amount, at 7.4 cubic feet, but big enough for a large suitcase, and it’s cleverly sculpted to accommodate a golf bag. Ferrari says the folding roof has had no impact on cabin space, though I wish the seat would drop lower and slide back an extra inch or so, and I suspect anyone much over six-feet tall would concur.

THERE’S DEFINITELY NO COMPROMISE with the driving experience, though. Structural bracing does add 265 pounds (which required re-tuning the shock absorbers, the only suspension change made from the Superfast), but even this leaves the Ferrari some 441 lbs. lighter than the Aston DBS Superleggera Volante, its closest rival. Just as crucially, the mighty V12 sits way back behind the front axle, and the transaxle moves the balance even further rearward, so that 53 percent of the GTS’ weight sits on the rear axle. Add in Ferrari’s super-quick steering rack and rear-wheel steering, and even from the spec sheet it’s clear this is anything but a lazy, nose-heavy V12 drop-top. 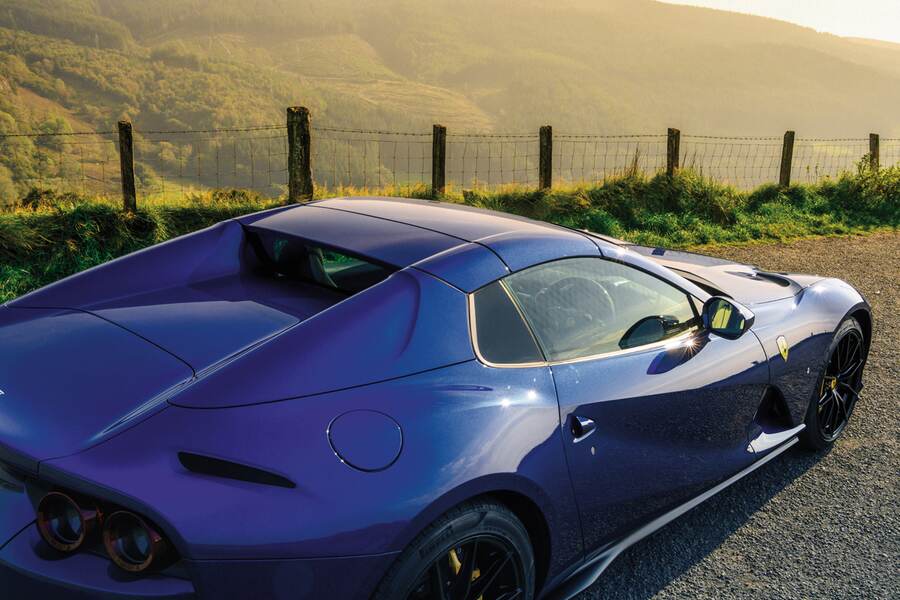 The 812 GTS drives with a rare wieldiness, delicacy, and agility for a car of this layout and size, even when I’m simply cruising around. It pivots around my hips even though I’m way back in the chassis, and I drive with the most measured of inputs, so incisively does the steering respond and so instantly does the car swivel into corners. If the GTS has lost any precision along with its roof, I’m struggling to detect it—this car feels tight.

Early on in my acclimatization, the 812 GTS also makes it abundantly clear that it is no lavish GT. The interior is very much performance focused, particularly with my test car’s carbon-fiber trim, racy seats, and the familiar button-covered steering wheel that frames a central tachometer (surrounded by a pair of now-elderly-feeling, pre-Roma displays). Similarly, the Ferrari’s ride has more of an edge than the super-pliant F8 models—though, as ever, Bumpy Road mode rounds off the edges—and while the dual-clutch gearbox can do refined when the manettino resides in its lesser settings, it generally concerns itself much more with speed, precision, and connection.

If you want narcoleptic pampering and endless toys, buy a Mercedes SL or a Bentley Continental GT. This Ferrari is a hard-core machine that can stretch to cruising if required, but comfort is, well, right on the edge of its comfort zone. 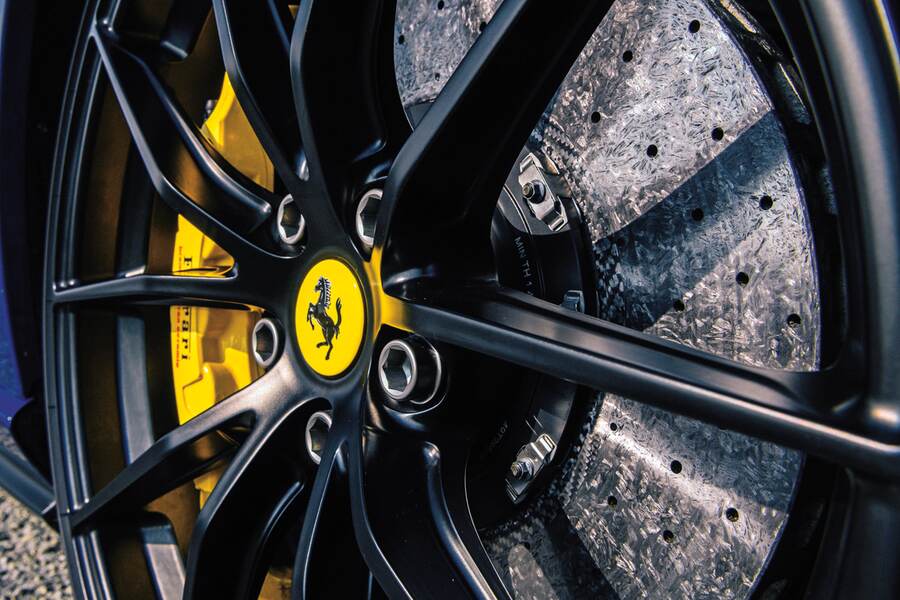 Instead, the 812 GTS is all about letting loose on a dream stretch of quiet blacktop, preferably set to high alert in Race mode. Throttle response is electric, as is the immediacy of the gearbox when I tap at the shift paddles. The way this thing carves corners is simply incredible: The Ferrari bites hard at the front, settling into a curve with very little roll, and it steers with a kind of hyper precision (although, as usual, its steering feel is far from world-class). Only the initially soft brake pedal feels slightly out of sync, but it quickly wakes up.

At first, I found the GTS a little too reactive, particularly in fast, long corners, but soon discovered this a car that really needs tire temperature to perform at its best, something the onboard computer usefully confirms with a visual graphic. It’s also a machine that seems to make more sense the harder you drive it.

When I finally take a deep breath and switch off all the stability systems, I find myself laughing because I’m having so much fun—and, sometimes, because I think I’m getting close to crashing! The GTS feels much more aggressive than an F8, less fluid and forgiving in that, when I slide the rear end, it immediately tries to catch and grip the tarmac. While the steering varies its level of assistance during this type of driving to hint at which inputs the driver should make, I can’t say I noticed anything beyond the car feeling pretty edgy. Ultimately, you need to be very confident when pushing past the limits, which is easier said than done in a machine this serious. 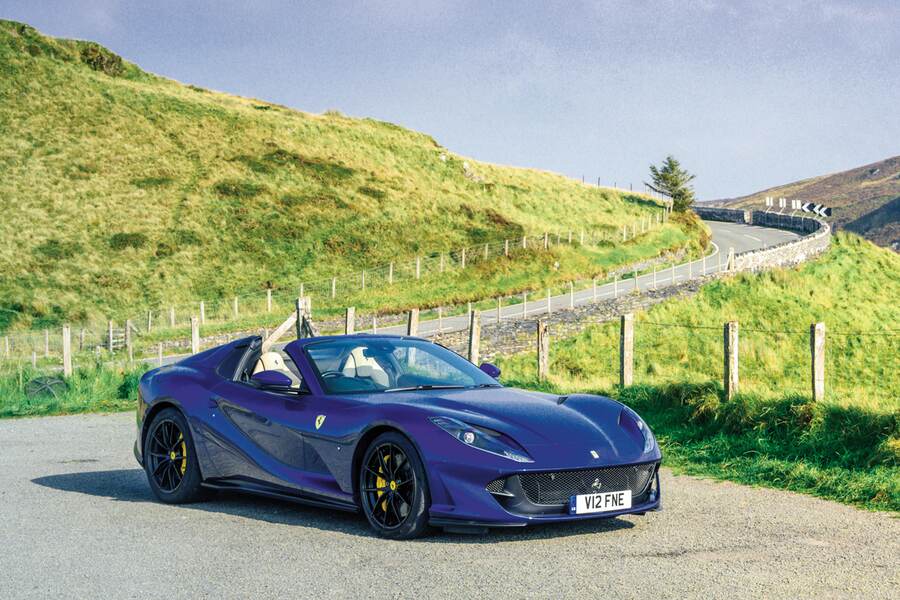 Ferrari’s V12 suits this serious-bordering-on-intimidating character perfectly, allowing me to steer the 812 precisely on the throttle and delivering an auditory bandwidth that’s nothing short of extraordinary. There’s a mellow, multi-layered bass in its lower reaches, and it builds to a single-note howl at high revs that seems to stretch up endlessly, like a guitar solo from the late, great Eddie van Halen. Maranello’s turbo-charged V8s produce more torque and serve it at lower revs, but the 812’s normally aspirated torque curve builds like a boiling kettle until, at least in less-than-ideal conditions, I ease past the traction and the revs flick up viciously with a spine-tingling yelp.

There’s no question in my mind that the 812 GTS is a benchmark car. It might not break any boundaries with its traditional layout, but it does in the way it makes a front-engined two-seat convertible feel. Think of it more as a supercar that breaks with convention than a sporting GT, and your mind will be a little less scrambled the first time you drop the roof and prod that astonishing V12. 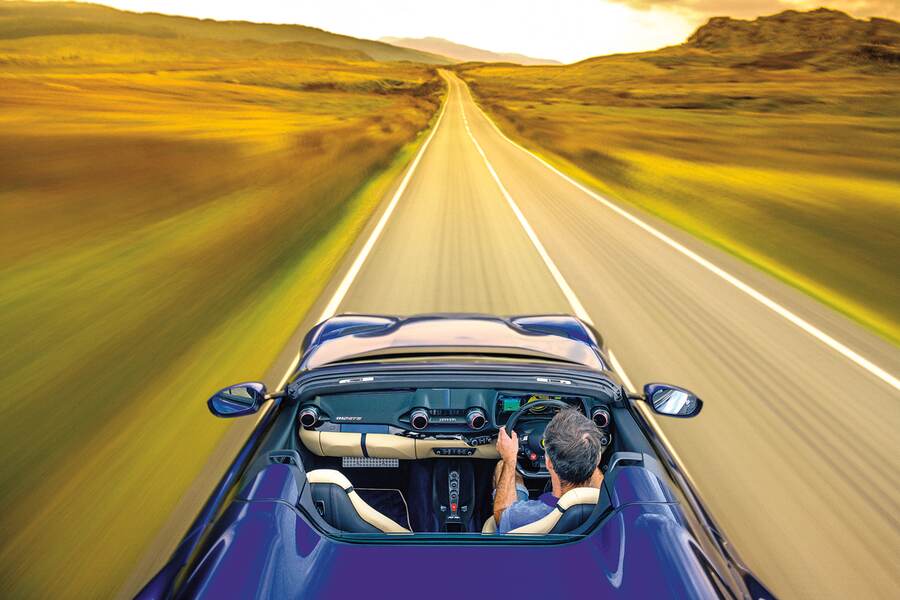 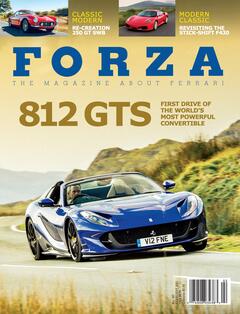