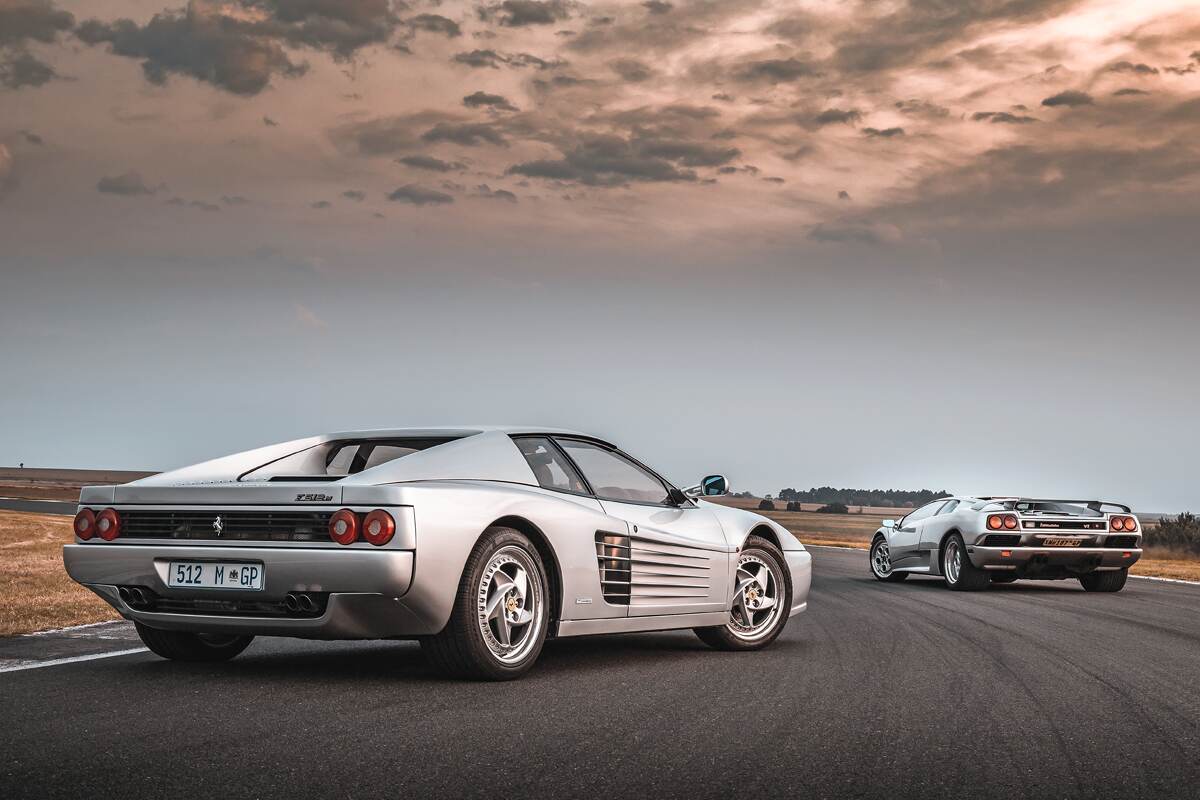 I’m instantly filled with nostalgia as my gaze settles upon the silver Lamborghini Diablo sitting between far more mundane vehicles in an industrial parking area next to its owner’s company. Memories of all those early supercars of the 1980s and ’90s, and the television programs and movies in which such cars were featured, overwhelm and send shivers down my spine. This is going to be a good day.

The lucky Lambo owner bought his 1995 Diablo VT eight years ago, when it had 43,000 miles on the odometer. He’s since added another 14,000-plus, driving it often for his daily commute (along with longer, more enjoyable runs just for fun). Since that commute carries him through Johannesburg, South Africa, he is clearly not afraid of tackling traffic with the Diablo, so I walk around to the passenger side of the car, expecting him to drive us to our destination. Instead, I find him warming that seat.

“Don’t you know how to use a clutch?” he asks with a cocked eyebrow before sending me back around to the driver’s seat. Okay, so be it: My first taste of a Lamborghini Diablo will be heading through peak afternoon traffic in South Africa’s largest metropolis. 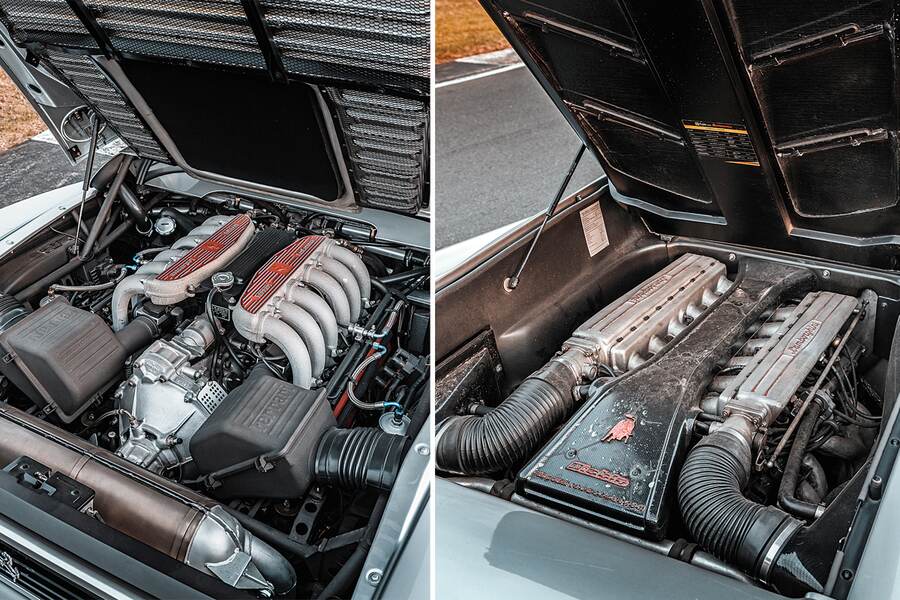 I swing up the scissor door—it’s still a proper spectacle 25 years on—and slide inside. Suddenly, I’m not concerned about the traffic anymore. The seat is mounted low in the chassis, and the view out is vastly different from that of any other modern classic I’ve driven. When I pull the scissor door shut, the way the side window dips down towards the front wheel gives me a clear view of the road, ideal for clipping apexes. The angled dashboard and steeply raked windshield combine to give the cabin an airy aura. It quickly becomes very clear that I’m positioned close to the nose of the car, with the business end behind me.

While it’s initially overwhelming to pilot the Diablo through rush hour, as I don’t want to ride the clutch in any way, after a few miles I realize it’s much easier than I had anticipated. Sure, the clutch is rather heavy, gear changes should not be rushed, and I’m looking out of the window directly at other cars’ door handles, but that’s about the extent of the challenge. As I navigate through traffic, the owner deals with all the gesticulations from fellow road users. He is obviously used to it.

Just in case I had managed for a moment to forget I was piloting something special, pedestrians and other drivers quickly remind me I’m not. People from all walks of life constantly give us the thumbs-up sign and encourage me to rev the engine. The public simply adores this silver Lamborghini. 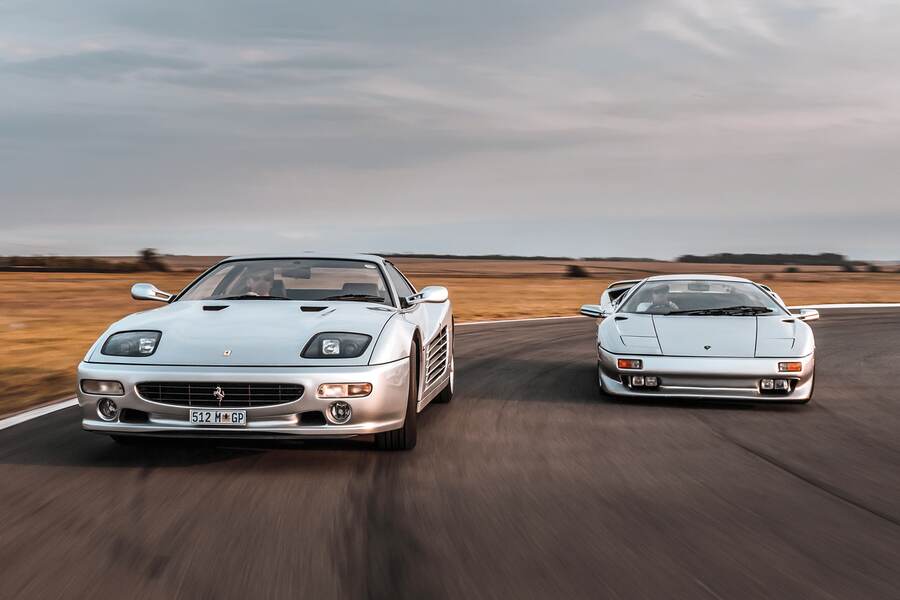 Soon enough, I break clear of traffic and can open up the throttle a bit. We’re heading to Red Star Raceway, situated approximately an hour’s drive outside Johannesburg, where we’re going meet up with another ’90s supercar, this one built just up the road from Lamborghini, in Maranello.

THE FERRARI F512 M offers a stark yet welcoming contrast to the outlandish Diablo. Whereas the angular, aggressively wedge-shaped Lamborghini wears a notable rear wing, pop-up headlights, and side and rear air intakes (and outlets), the Ferrari visually classifies itself as a gentleman’s super-GT. Although both cars have NACA ducts above their headlights, the F512 M’s front end is more fluid, and its gentler overall shape is defined first by the flowing curve above the slatted side intakes and then its lower, wingless rear end. While it looks less shouty than the bull from Sant’Agata, the Ferrari still stands out from the crowd.

The F512 M was the third and final iteration of the legendary Testarossa, its direct predecessor being the 512 TR. Unveiled at the 1994 Paris Motor Show, the M introduced several new Pininfarina styling elements. Gone were the Testarossa and 512 TR’s pop-up headlights, replaced with streamlined fixed units, in came those NACA ducts, a new nose design (including a grille that hinted at the upcoming F355), and new three-piece wheels. 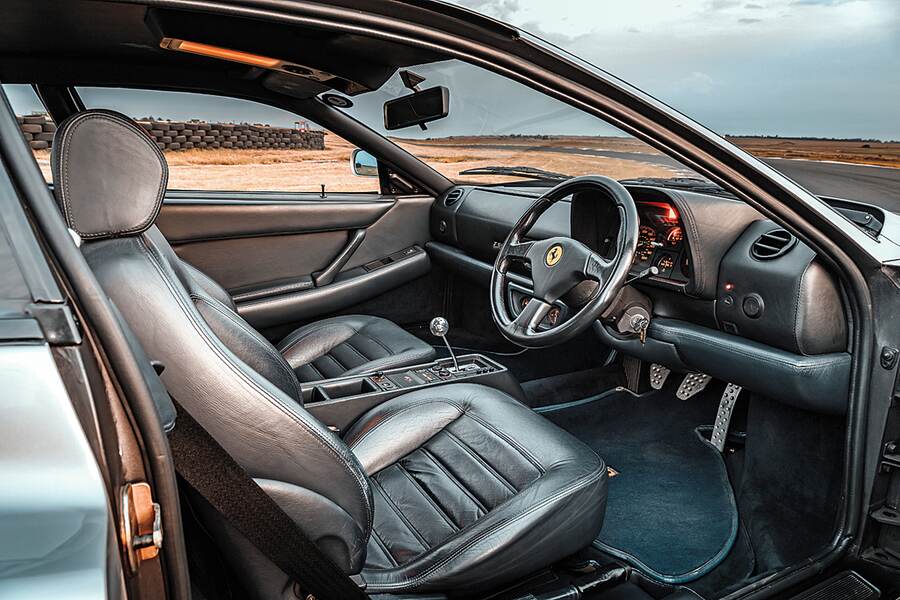 At the rear, classic quad taillights replaced the previous rectangular units, while the grille in between was reduced in size. Overall, the F512 M was a smoother, more modern design than its immediate predecessors, with, as one would expect, much less of a 1980s’ design sensibility.

Stepping into the M’s luxurious cabin again confirms this is a very different type of supercar than the Diablo, despite their shared mid-engine layout. The combination of Nero (black) and Blu Scuro (dark blue) leather, together with the plush carpet, lends the cabin a cozy feel—not at all the case with the Lambo—although the seriousness of the performance on offer is apparent in the quintessential, open-gate shifter topped with a metal knob and the drilled metal pedals, which are slightly offset to the left [in this right-hand-drive car—Ed.]. 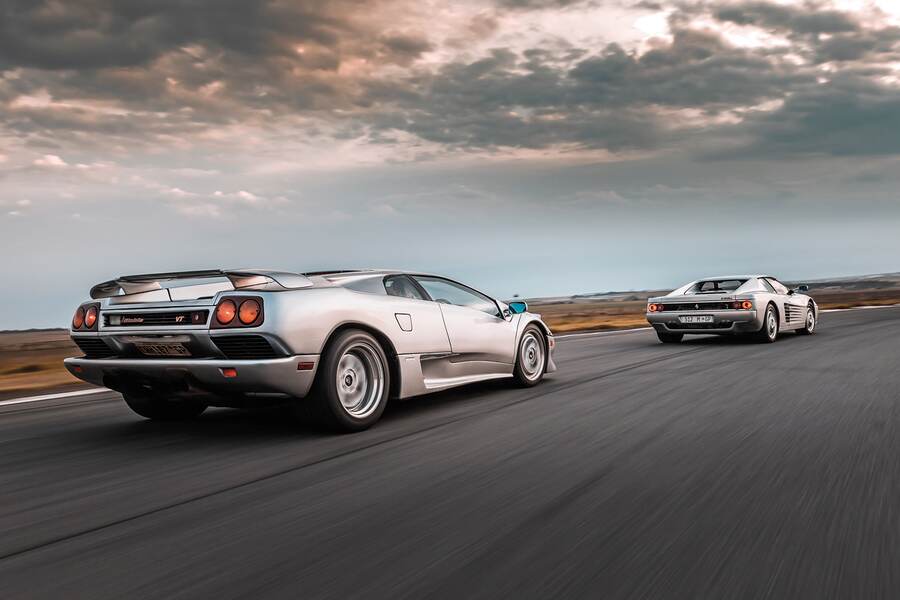 The seating position is good and comfortable, although I wish the steering wheel was closer. Despite being 6-foot-2, my hair only just brushes the roof lining, Ferrari having managed to allow a decent amount of space inside the low-slung car. The Ferrari’s cabin is more conservative and classic than the almost playboy-like Lamborghini interior, which is once again perfectly in line with the different approaches of these machines.

I turn the Ferrari’s key and the engine growls into life. As the gear lever slips into first gear with a soft clack, I can’t help but smile—navigating Maranello’s open shift gate is one of the great automotive experiences. It only takes a few corners to realize this F512 M is in tip-top condition. There are barely any rattles and it almost doesn’t feel its age, likely a tribute to the Ferrari’s low 16,000 miles and impeccable condition.

Turn-in is good, keeping in mind the massive weight of the flat-12 behind my shoulders. As I get into a rhythm with the Ferrari, I start trusting those wide rear tires: 295/35ZR18s, against the Lambo’s even wider 335/35ZR17s. (Both cars wear 235/40s up front.) Once the F512 M has settled into a corner, a measured flex of the throttle reveals just how much grip is actually on offer. The brakes feel strong, even by modern standards. 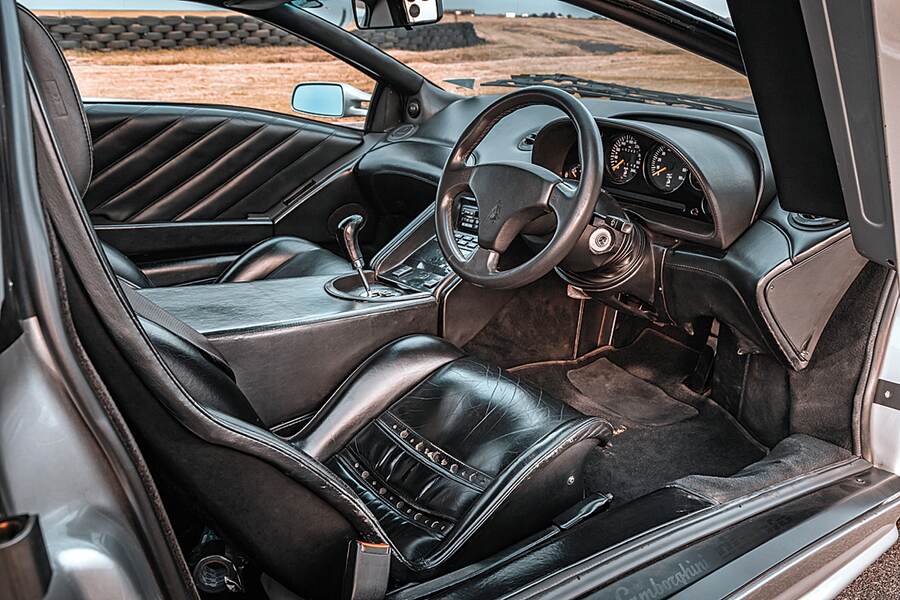 The 5-liter engine is eager to rev, and does so in a linear and efficient way, typical of a large, naturally aspirated unit. There are no surprises, just an honest howl running through the rev range all the way past 7,000 rpm to the red line. High revs aren’t a requirement, though, as the torque lower down in the rev range allows enticing levels of acceleration—again, an ideal characteristic of a super-GT.

The Ferrari’s owner is utterly pedantic about the condition and originality of his cars, which explains why this is such a superb example. “In 2014, a Ferrari specialist approached me and said he had a car that I might be interested in,” he recalls. “There are only two of these cars in South Africa and I’ve always appreciated them, these flat-12s being the powerhouses in the ’60s and ’70s in road and race cars.

“I’ve owned a TR for a couple of years, but the M represents the gold standard and the last-of-the-line of the flat-12 recipe,” he adds. “The fact that this car was completely original and meticulously maintained appealed to me. It’s just a pure, exciting, classic flat-12 Ferrari which I fell in love with.” 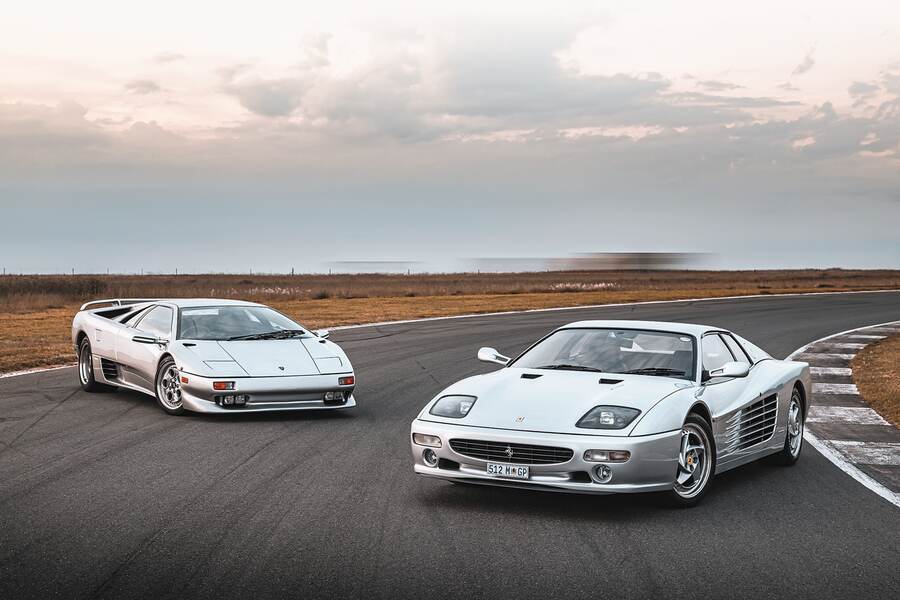 RETURNING TO THE DIABLO’S CABIN requires a little adjustment. I feel like I’m much closer to the ground, and the wider transmission tunnel much more definitively separates me from my passenger. As in the Ferrari, the open-gate shifter (topped here by a slightly less appealing leather knob) starkly reminds me of a time when driving these cars demanded a focus and determination not required nowadays. The view through the side mirrors shows off the wider-than-the-front rear haunches. It’s a sight to savor, as is the imposing, yet somehow perfectly integrated, rear wing with its adjustable center section.

The Diablo is no lightweight, but it turns in surprisingly crisply if I take its size and weight into consideration; the relatively small steering wheel also helps the Lambo feel more nimble. I can easily place the front wheels exactly where I want, while the throaty, intense sound from the quad exhaust pipes further underlines the differences in personality between Diablo and F512 M. That said, the Lambo’s previous owner couldn’t help but fit an aftermarket Tubi exhaust, which further differentiates the two cars’ sound.

Lamborghini’s brutal 5.7-liter V12 produces 492 bhp, and although you can shift early and rely on the available 428 lb-ft of torque, it’s far more rousing to leave it in gear and experience the rawness as the engine roars well past 6,000 rpm. Every gear change takes some planning, but it’s a welcome involvement compared to today’s effortless dual-clutch systems. Similarly, the brake pedal is firm and needs a proper push to scrub speed. 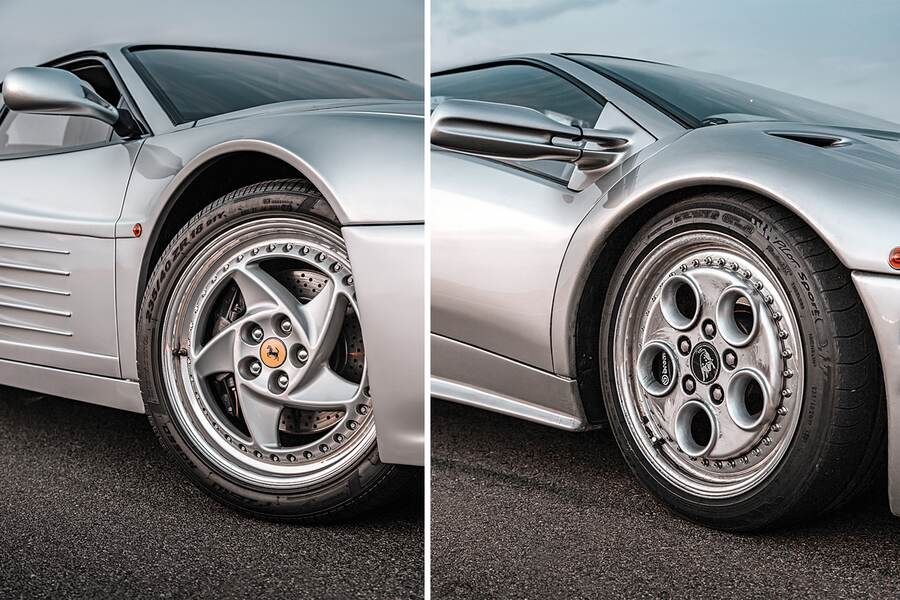 Driving the Diablo is a huge thrill, one that, once experienced, you’ll want to do over and over again. Perhaps adding to the thrill is the fact that the owner, in search of a purer driving experience, removed the front drive shafts, making this VT a true rear-wheel-drive supercar. It’s hard to say enough about the Lambo’s looks. When the owner takes the car for a final lap with the sun already set behind the horizon, the Marcello Gandini shape looks utterly stunning and focused. It’s a sight I’ll never forget.

Design is what drew this car’s owner to the marque. “Today I watched again the opening scene of The Cannonball Run,” he says. “That movie is what got me into Lamborghinis in the first place, prominently featuring a black Countach and some beautiful women. I always wanted a Countach. Years ago I bid on one, but couldn’t afford it at the time, then opted to buy a Ferrari 308 instead. Later things fell into place, and in 2012 I was able to purchase this example after I put in a cheeky offer.”

I’m not at all surprised to learn he has no plan of ever selling it. “Every single car of mine I purchase to drive and experience,” he states. “I never, ever buy a car just to park it.”

Nostalgia aside, I wasn’t sure what to expect from the Lamborghini or the Ferrari, and each surprised me. Both looked as enticing in real life as I had hoped, and both were easier to drive than anticipated. Each car represented the pinnacle of performance in its day, but the Diablo is clearly the full-on supercar of the pair, both in terms of its raw, exhilarating performance and in the way its stance and lines snatch away all eyes from the Ferrari.

The F512 M does its job in a more sophisticated, and perhaps more stylish, way. If you want to cover long distances and move slightly more under the radar, the Ferrari is clearly the one to have. As Road & Track once said, “Its styling is dramatic, its highway manners nearly flawless, and that big 12-cylinder engine makes a soul-stirring sound you will hear nowhere else. It’s a combination of desirable attributes difficult to improve upon, even for Ferrari.”

It’s hard to disagree. As predicted, this was a good day. 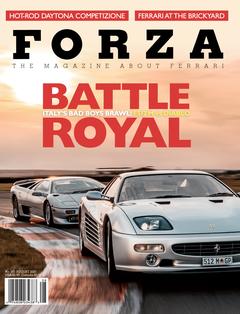