In the early 1990s, Honda introduced an all-new supercar that promised to beat the European establishment—including Ferrari. 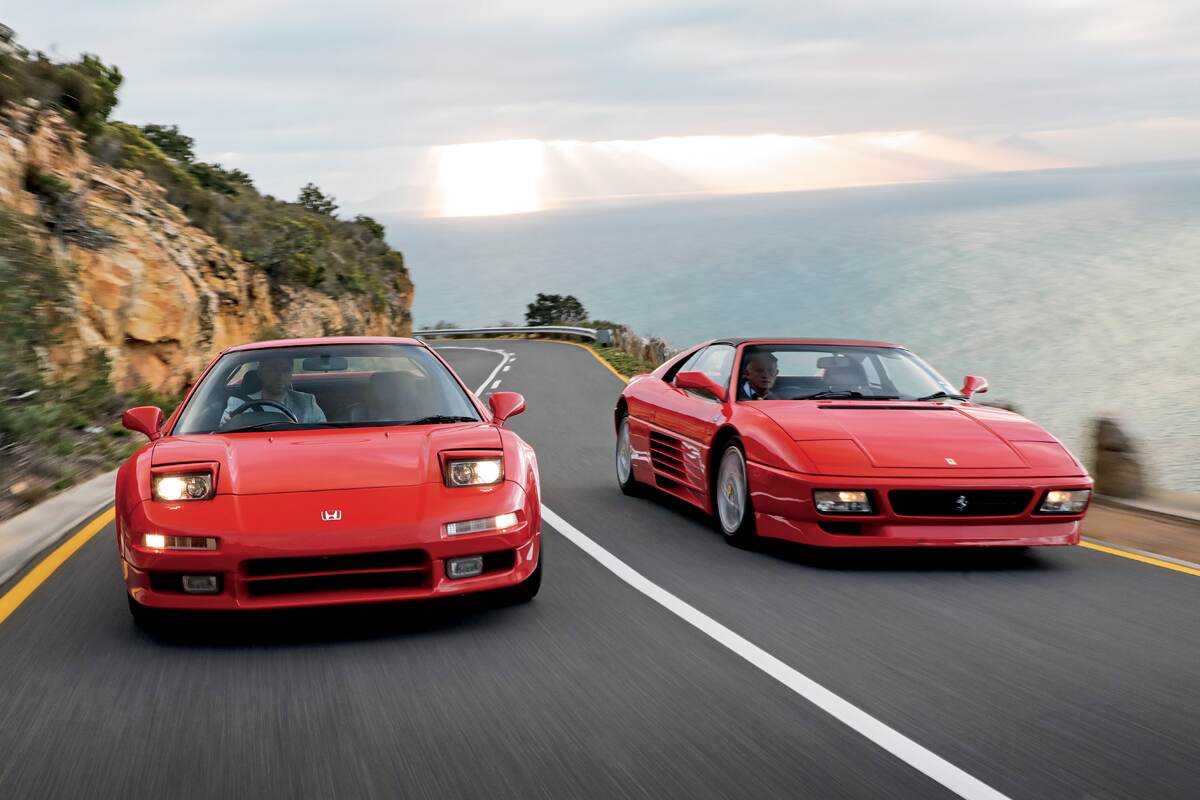 For many auto enthusiasts, the 1990s marked the end of an era for traditional sports cars. Given the proliferation of advanced features, ranging from all-wheel drive to sequential turbocharging, the elemental machines adored by purists, equipped with manual transmissions and bereft of significant electronic gimmicks, were on the endangered-species list.

While many European and Japanese automakers pushed the technological envelope, Ferrari stuck with well-established tradition. When the 348 was launched at the Frankfurt Auto Show in late 1989, its only driver’s aid was ABS. Even power steering was deemed unnecessary.

Nonetheless, the newest Prancing Horse marked a clear jump forward from the 328 (which itself was largely an evolution of the 308 that debuted in the late ’70s), boasting an all-new monocoque chassis in place of the traditional assemblage of steel tubes and a larger, more powerful 3.4-liter V8. A four-inch longer wheelbase allowed for a larger cabin, which was far more modern than its predecessor’s. The 348’s exterior design was clearly inspired by that of the radical Testarossa, with characteristic side strakes and rectangular taillights. 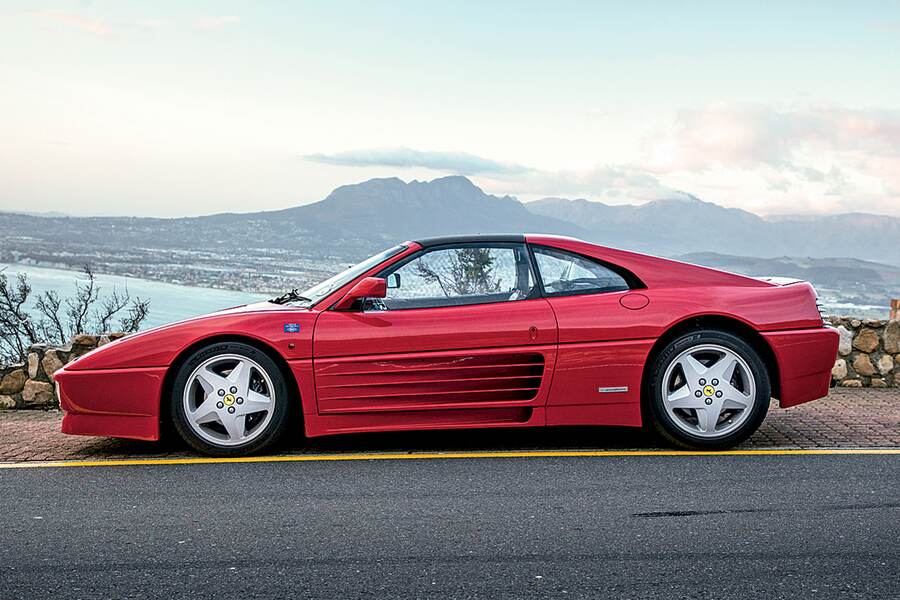 This targa-top 348 ts is its current owner’s first and only Ferrari. “I guess it’s every guy’s ambition to own a Ferrari sometime in their life,” he says. “I’m a member of several car clubs, one of them for cars older than 20 years. Because of this, and also because of its affordability and being one of the last Ferraris without any complicated electronic wizardry, I decided on the 348.”

The 348 looks exotic from virtually every angle. Its compact dimensions and footprint contribute to the taut, attractive design. However, it’s dense for its size, with a dry weight of 3,071 pounds, which might put it at a disadvantage against its competition today, the sinuous Honda (Acura in North America) NSX, which weighs in at 3,020 lbs. wet.

Launched in 1990 into a niche dominated by European manufacturers, the NSX was designed specifically to rival cars like the 348 and Porsche’s 911 Turbo. The Honda’s purist vision shows in its spec sheet—mid-engine layout, normally aspirated 3.0-liter V6, five-speed manual transmission, although power steering was available as an option—but the Japanese manufacturer went more exotic than its Italian rival, developing an aluminum chassis, bodywork, and suspension (Ferrari would follow the NSX’s lead in the late ’90s with the 360 Modena), titanium connecting rods, and more. 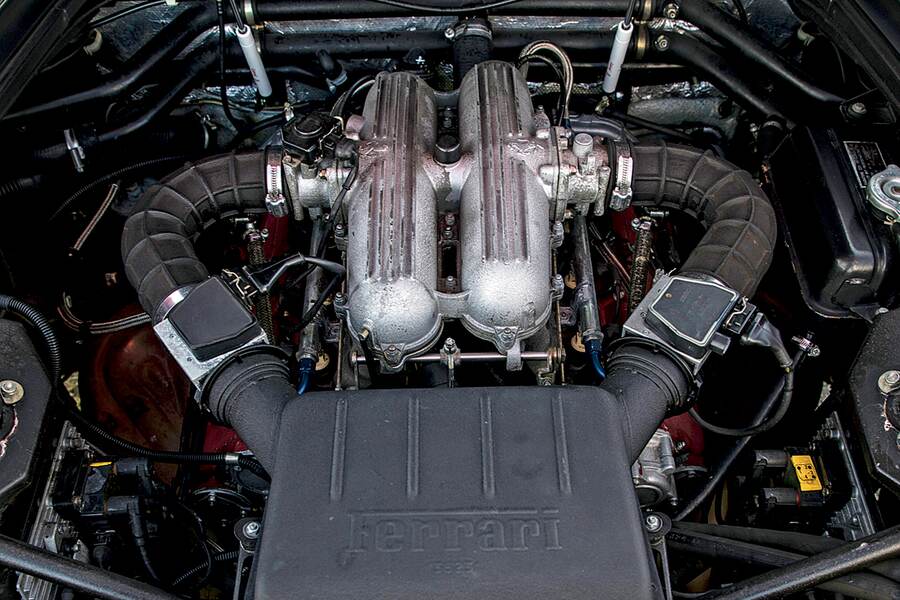 As mid-engine cars, both the Ferrari and Honda have stubby noses and cabins pushed far forward, but the similarities mostly end there. The NSX embodies simplicity, with a sleek hood unmarred by headlights (at least until they pop up, a stark reminder of the era). The bodywork dives smoothly into the rectangular side air intakes, then flows elegantly to the rear, concluding with a discreet wing. It’s a clean, unfussy design—in marked contrast with the straked, bifurcated 348, which has sloping C-pillars that stretch back to end in a small, integrated lip spoiler. The 348’s larger and wider five-spoke wheels (17-inchers all around versus 15s front and 16s rear on the Honda) and lower ride height give it a more purposeful stance than with the NSX.

Both are fairly rare machines. Between 1989 and ’94, roughly 8,700 348s were produced. Honda built around 10,000 more NSXs over a much longer period of time (from 1991 to as late as 2005), and the fact that they are a much more common sight today is at least as much a testament to Honda’s build quality as its higher production numbers.

The real question, of course, is which is the more enjoyable car to drive. Similarities aside, I suspect they will prove to be very different machines. 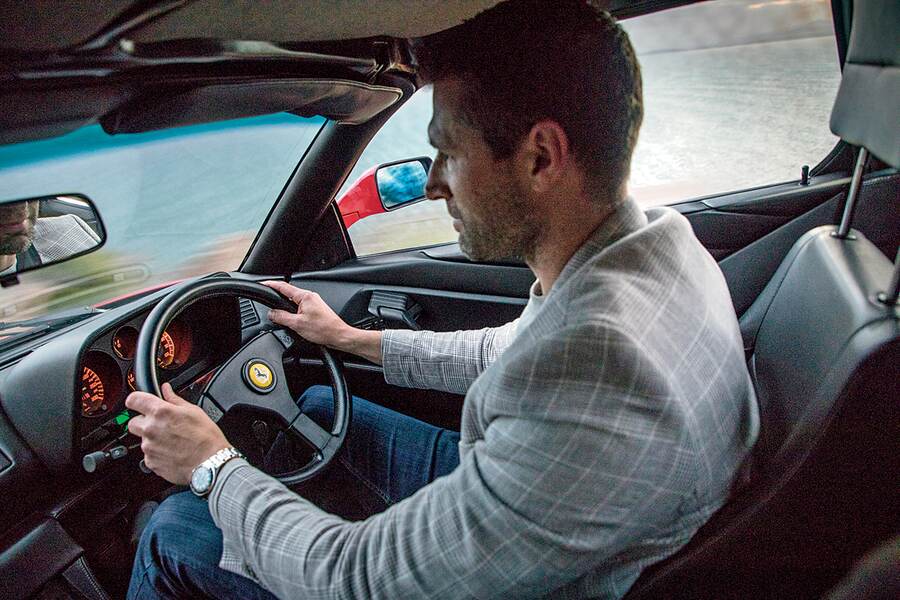 WHEN I DROP INSIDE, the Ferrari’s cabin is more spacious than I had expected from the outside, partly because the shallow dashboard frees up additional room. For the driver, the simple steering wheel, stark analog gauges, and that gorgeous open shift gate are undoubtedly the highlights.

A 300-hp, 3.4-liter, 90-degree V8 and accompanying, transversely mounted five-speed transaxle inherited from the Mondial t reside under the rear deck. The engine turns over quickly, although the sound is not as raucous as I’d expected.

The 348’s dog-leg first gear is a delightful reminder of cars from a couple of decades ago. Once the transmission fluid is warmed up, the shift action is not particularly heavy, but, sadly, there’s little of Ferrari’s traditional click-clack sound when I change gears; unlike the 328 or the later F355, the 348 uses a cable shift mechanism. 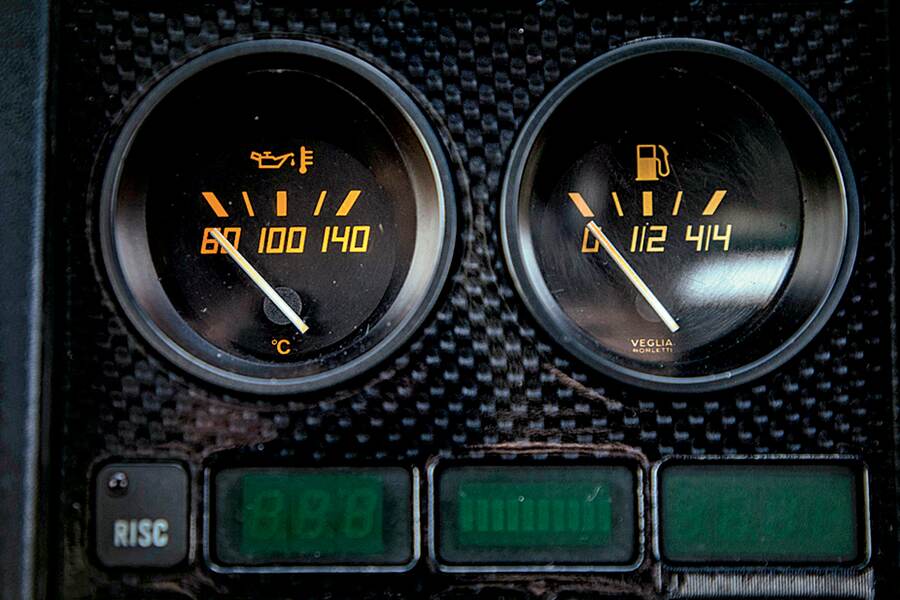 On the plus side, on twisty roads I can easily swap between second and third gears, which requires a simple straight-forward or straight-back shift, saving time and effort as I scythe through the H-pattern ‘box. Every shift action is a bit of an event, and while it can’t be rushed, why would you want to when every shift has such a satisfying, thoroughly mechanical action to it?

I feel like a bit of a star when piloting a car as beautiful and muscular as the 348. Because there is no power steering, parking maneuvers are a pain, but that matters little when the Ferrari starts moving and I’m flooded with steering feedback. The wheel loads up the more I turn it, which is something you can’t really experience in modern cars. It has been a while since I’ve enjoyed a car’s steering feel to this extent, although it always takes some effort to make the 348 do what I want. The brakes feel firm and positive without requiring so much effort.

The view from the driver’s seat is unobstructed. By virtue of being close to 6-foot-2, I can see only a small part of the nose, as the front lid drops down sharply. From behind the wheel I’m always mindful that the Ferrari’s nose is short, and this contributes to the car’s compact feel. 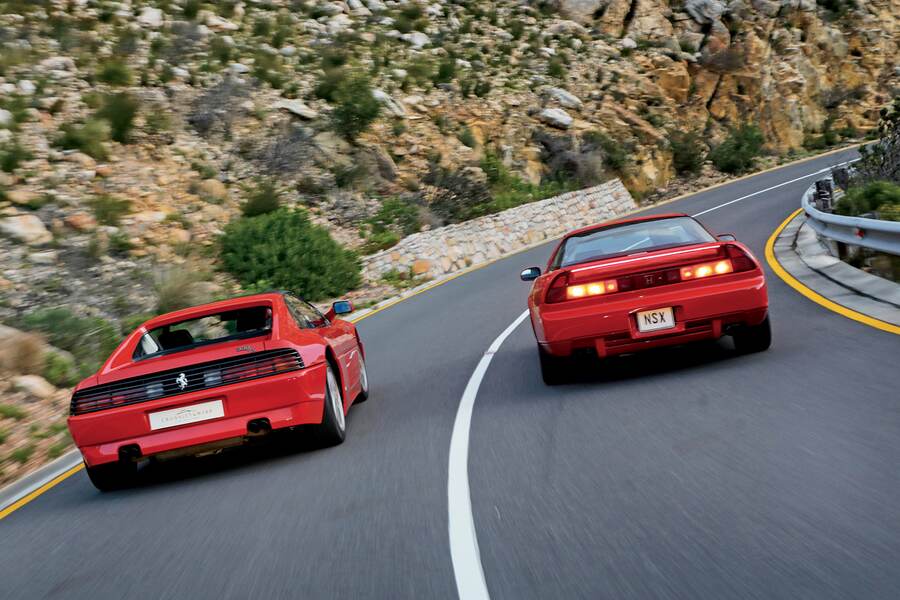 As I start to rev the engine harder, the V8 emits a more intense, soulful sound; the V8’s zest increases as it approaches its 7,500-rpm redline. (Maximum power arrives 300 rpm earlier, however.) There’s more than enough torque available in the middle of the rev range, but there’s no reason to dawdle when it’s so enjoyable to watch the orange needle spin from the beginning of the tachometer’s range to the end as the engine howls away.

At the end of the day, when the owner drives away in his car, I discover the sound from the 348’s engine and exhaust is purer and more intense from the outside than when I sat inside the cabin. Sadly, that’s the case with most performance cars.

So the Ferrari offers an exotic experience in every way. So what about the Honda? 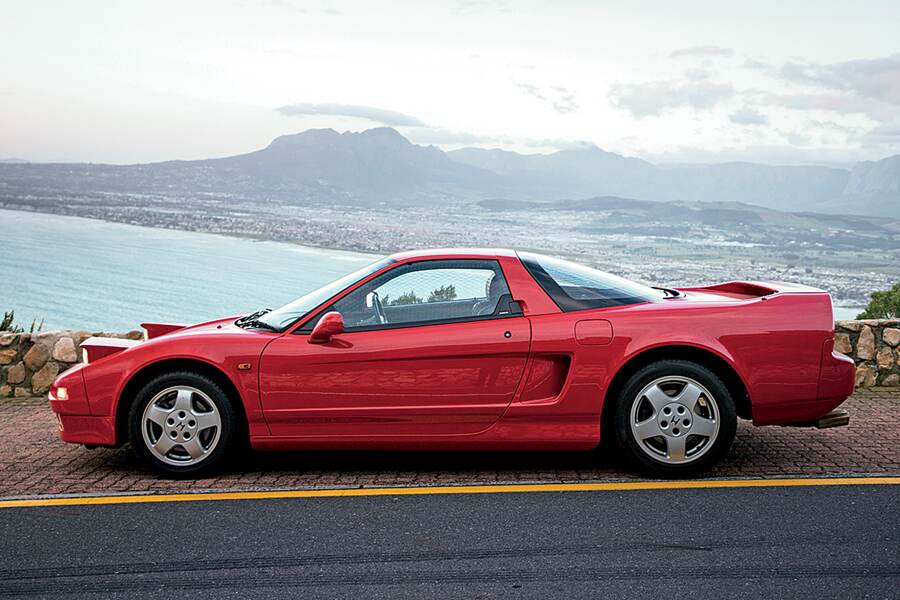 IN ITS HEYDAY, the NSX was the most expensive car produced in Japan. It was manufactured by a select group of 200 employees, who built 25 examples per day. For a marque that had never produced a supercar before, the NSX was a major achievement.

The car was also directly tied into the company’s efforts in Formula 1, much as Ferrari leveraged its own Grand Prix expertise. Honda powered all three McLarens that the late Ayrton Senna drove to the World Championship, and carried this engine-building experience over to the NSX. Plus, since the firm had access to the Brazilian driver, it enlisted Senna’s help to fine-tune the car’s setup. (If you haven’t seen it already, be sure to watch the YouTube clip of Senna, wearing white socks and loafers, heel-and-toeing an NSX-R around Suzuka.)

This particular NSX, believed to be one of only three examples in South Africa, can lay claim to its own special place in auto-racing history: In 1993, it was used as the pace car for the last F1 race at Kyalami. While its current owner didn’t have the Honda at the time—he purchased it in 2003—he was there and remembers seeing his car leading the field on the parade lap. As an incurable gearhead and collector, he couldn’t help but to snap it up when he got the chance. 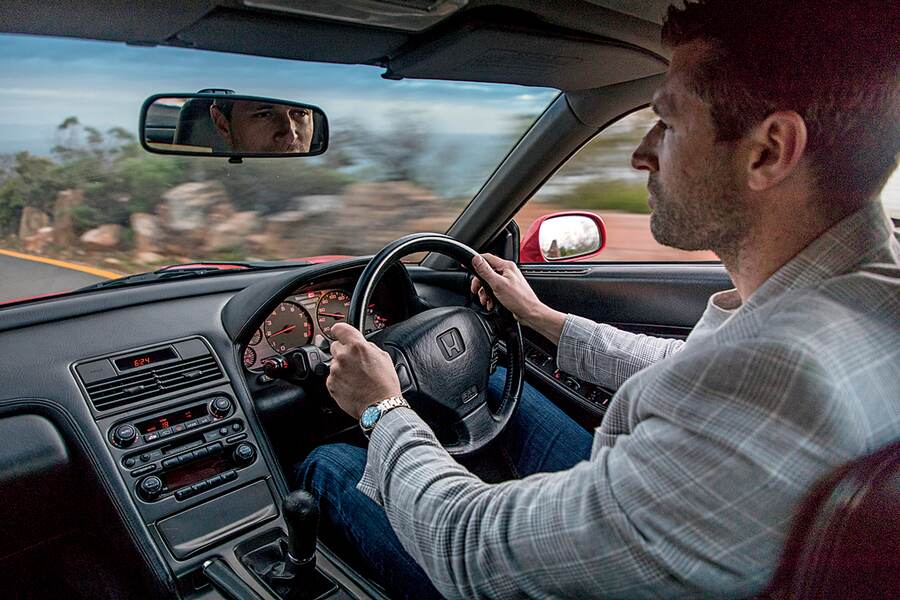 “I saw it at a Honda dealership and couldn’t believe my eyes,” he recalls. “I remember it vividly. I traded in a black Honda Accord 2.4 Automatic for the NSX. The combination of the exclusivity of the car, especially in South Africa, the build quality, the history of the car’s development, and the engine all contribute to my love for, and enjoyment of, the NSX.”

Volumes have been written about the NSX’s brilliance. In its 1994 “Performance Car of the Year” issue, the erstwhile British magazine Performance Car described it as “the most complete, subtly rewarding supercar experience this side of £100k.” I once read that South African-born F1 designer Gordon Murray both owned an NSX and drew inspiration from it when he designed the McLaren F1 supercar. High praise indeed, and now it’s time for me to find out if all holds true.

Climbing into the Honda’s driver’s seat, I find it surprisingly comfortable, almost cosseting, yet it would soon prove to offer sufficient support in the corners. When I turn the ignition key, the 3-liter, 270-hp V6 comes alive with a soft bark. 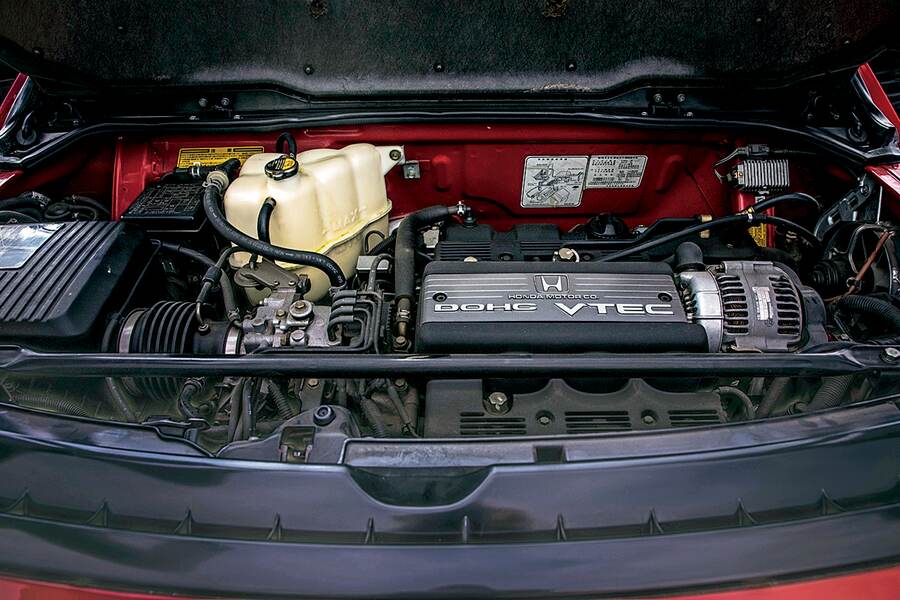 I move the gear lever into first, let the clutch out, and quickly discover that the NSX’s transmission is the most notable of its major controls. Honda’s now-discontinued S2000 is often, and rightly, hailed for its snappy, close-ratio six-speed gearbox, but the NSX’s ’box feels even slicker to operate. The shifter’s throws may not be as short as the S2000’s, but the overall feel is noticeably better, a precise, mechanical action.

After a few miles, when all the Honda’s mechanical bits have reached their optimal operating temperatures, I get more zealous with my throttle inputs. The engine spins easily between 2,000 and 3,000 rpm, where there is enough torque for simply pottering around, but it’s far happier when the needle swings up toward the indicated 8,000-rpm redline—although the actual rev limit is 8,300.

As a source of driving enjoyment, a high-revving, naturally aspirated engine offers rich rewards, and the NSX’s V6 must be one of the best examples ever made. Whenever I push the pedal, Honda’s engine responds immediately, revving with far greater willingness than any number of modern engines. It almost feels as if there is no flywheel! 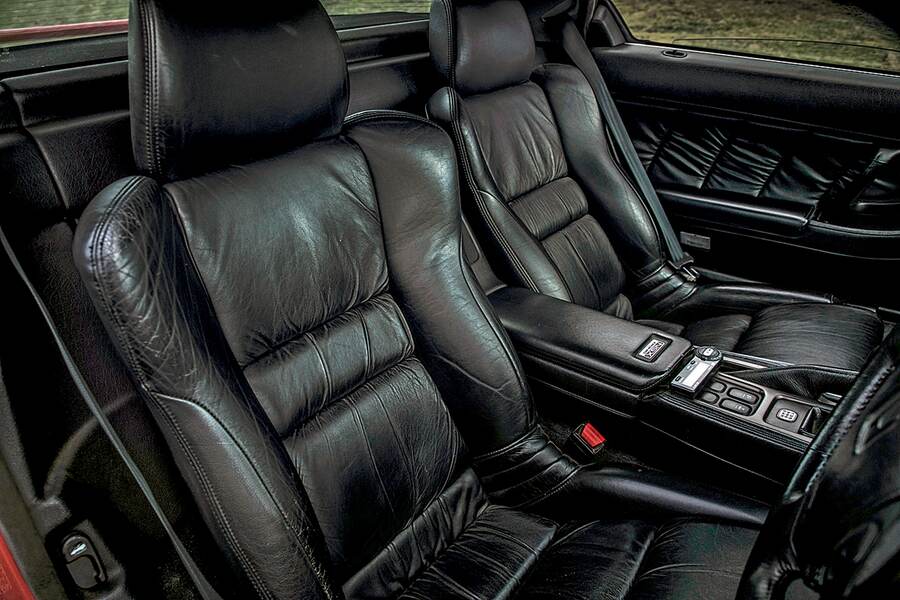 The NSX builds speed briskly and, as the redline approaches, the engine sound that emanates from behind my shoulder and the metallic rasp from the flat-tipped exhaust tips intensify. I can only marvel that the 3-liter engine, with those exotic connecting rods, sounds and feels as if it could continue to spin to 10,000 rpm—or more.

When negotiating a mountain pass, the all-aluminum Honda’s lightness makes it easy to change direction. The car feels well-planted along the twisty coastal road, yet its ride quality, helped by relatively high-profile tires, is impressively pliant. The power-assisted steering offers more than enough feedback and makes the car very easy to pilot around town. Visibility over the nose is good in all situations, allowing the NSX to put on a very convincing show as a very versatile, everyday car. But of course it’s much more than that.

Ferrari and Honda’s approach to a supercar was, and remains, vastly different. But since both the 348 and NSX offer such special and very memorable driving experiences, you’re are all but guaranteed to have a smile etched on your face no matter which key you take. While the Ferrari is the one I (and most other enthusiasts) would prefer to have in my garage, it’s impossible to ignore the NSX’s sublime engine, super-slick gearbox, and broader usability, elements which would make it a winner for some. 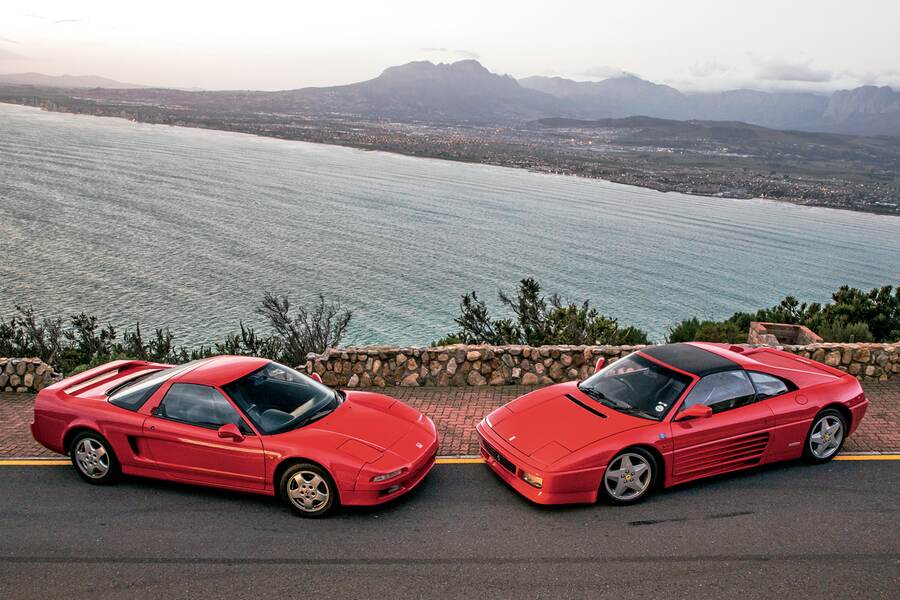 There’s no question Honda accomplished what it set out to do, entering the supercar race near the top of the standings. All these years later, it’s still an astonishing feat: Who would ever have thought a Honda could come this close to beating Ferrari’s finest? 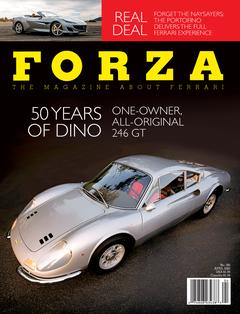