Jeff Duval reimagined the 400i with better looks, top-quality materials, and a lot more power. 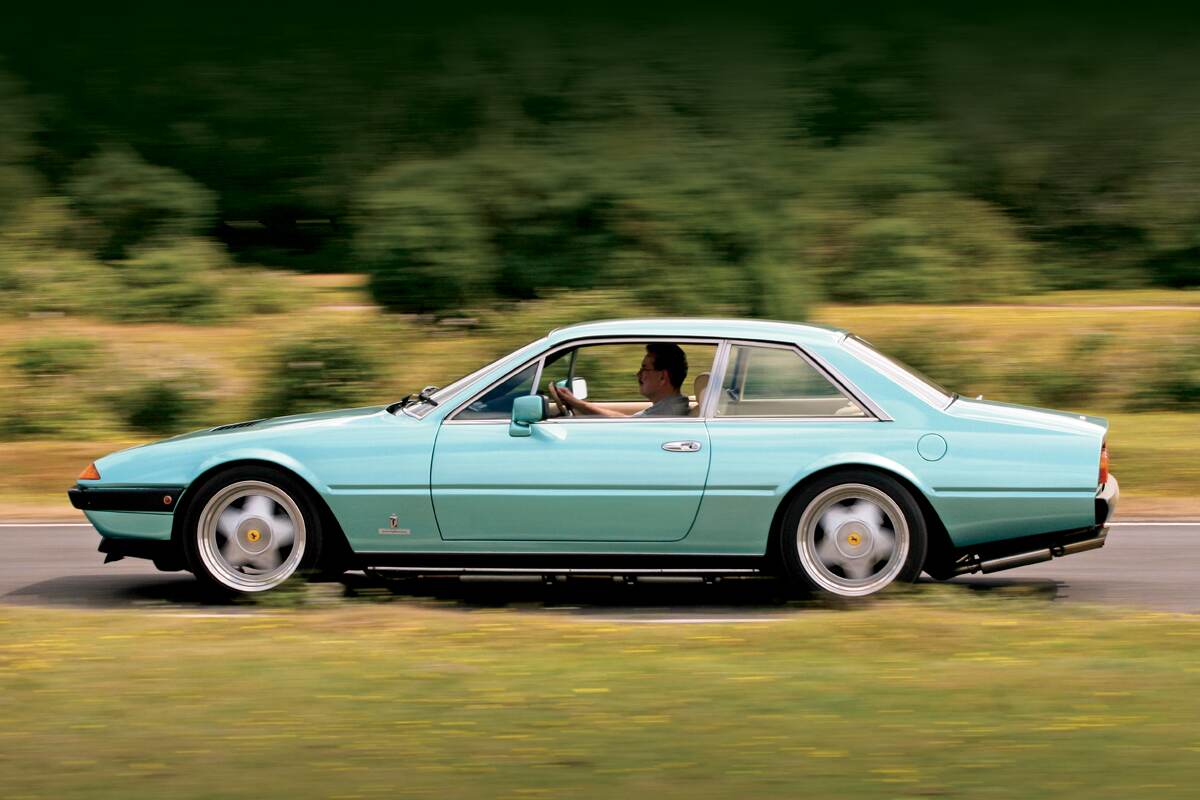 When it comes to cars, especially Ferraris, some enthusiasts are sticklers for originality. Others like to personalize their cars with bolt-on, aftermarket tidbits. Frenchman Jeff Duval, who many moons ago made his home in England, has taken the latter notion somewhat further with his 1980 400i GT (s/n 31171).

Duval, who has been building custom motorcycles since he was a young man, decided to turn his artistic eye and talents toward his own car. While this is the first Ferrari he’s modified, it’s not the first Ferrari, or even 400, he’s owned.

“In the mid-’80s, I bought a 365 GT4 2+2,” explains Duval, “but it had the GM automatic gearbox, which was awful, so I got rid of it and bought a five-speed 400. I liked it, but it struck me as an unfinished project by Ferrari. A lot of people think the 400 is an ugly duckling, but I always liked it because it has the Colombo V12, it’s very close to the Daytona, and it’s a proper four seater. I started to dream about how I could improve it. What would I have done if I had been a designer at Ferrari and someone wanted a ‘Speciale’?” 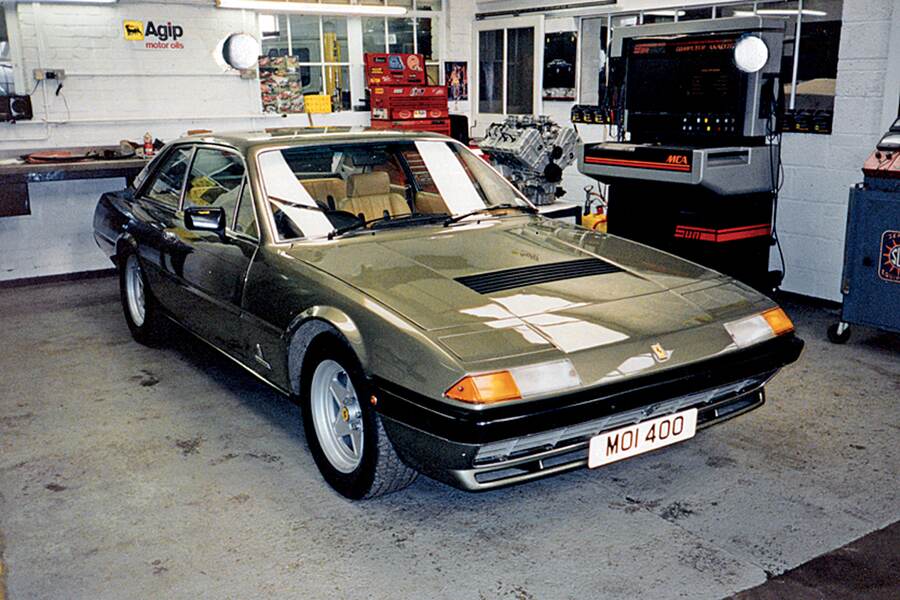 Unfortunately, Duval needed money for his just-started business, so the 400 had to go. A few years later, though, he was able to buy a new 412.

“I got a good deal on it because Maranello Concessionaires [the UK Ferrari importer] couldn’t sell it,” he says. “But I didn’t like it at all, so I sold it and lost a fortune. It was the late-’80s, and Ferrari weren’t producing very good cars. They were cutting corners and all sorts. However, the dream of improving the 400 stayed with me, and I always wanted to do it.”

Fast forward to 2014, when Duval rekindled that dream and started searching for a manual-transmission, right-hand-drive 400i. As luck would have it, he found just the car at Forza 288, a well-established classic Ferrari dealer just a few miles from his home on the south coast. 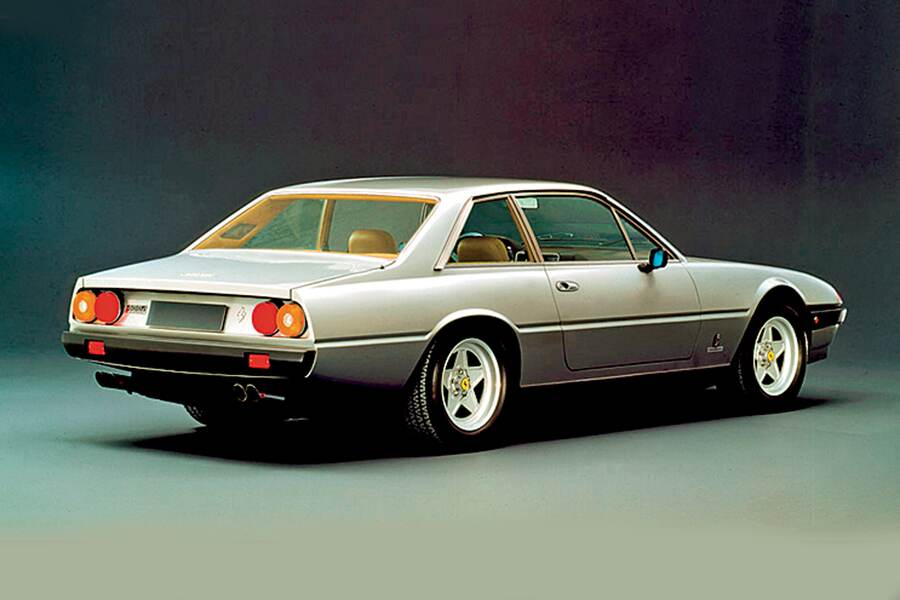 The 400i had been ordered new from the factory by Shaun P. Bealey, the Deputy Chairman of Maranello Concessionaires, for his own use. As confirmed in period Telexes from Ferrari, Bealey initially ordered it in Tourbillon metallic with a dark blue interior, but then changed his mind to Grigio Fumo Herbol, an unusual color he described as a “Peugeot silvery green” which he had seen when visiting the factory in late ’79.

Bealey then specified beige leather seats with dark green inserts, beige carpets, and black dashboard, rear shelf, and trim. Plus, exterior mirrors on both sides. His new Ferrari was first registered in the UK in March 1980 and wore Bealey’s personalized license plate: 77SPB. The invoice from Ferrari totaled £17,696 (roughly $38,931 at period exchange rates), and the handsome 400i soon appeared in Maranello Concessionaires’ advertising for the model.

Designed by Pininfarina, the long, angular 400i was powered by a 4.8-liter 60-degree V12 with a Silumin alloy cylinder block and Bosch K-Jetronic injection that pumped out 310 bhp at 6,400 rpm and 347 lb-ft of torque at 3,600 rpm. A five-speed manual or a three-speed automatic transmission sat directly behind the engine, inside a steel tubular frame outfitted with independent suspension and Koni shock absorbers all round. Braking duties were handled by servo-assisted, dual-circuit discs, themselves surrounded by 15-inch, cast-alloy wheels. 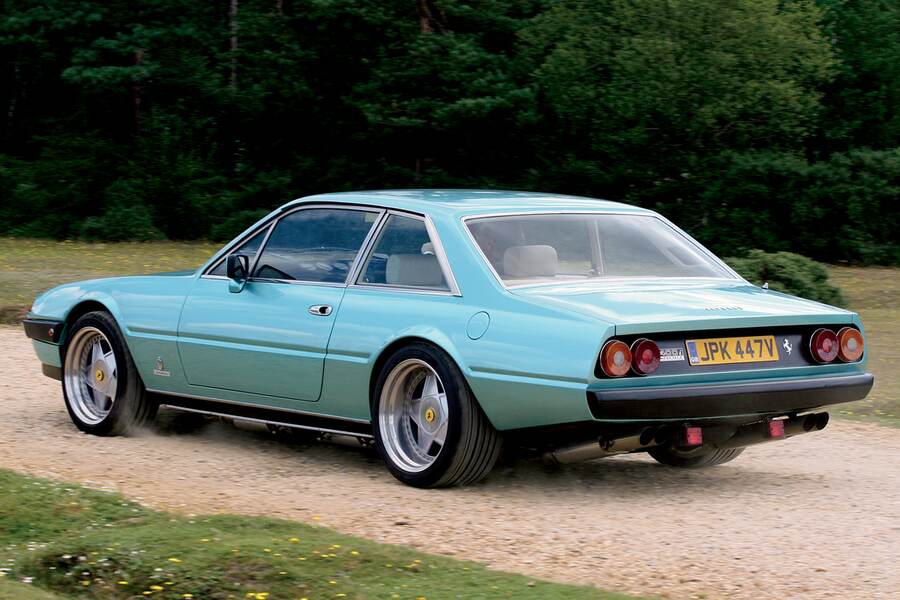 The hardware was all typical Ferrari fare of the era, but the car’s amenities leaned in a different direction. Air conditioning, power steering, electric windows, tinted glass, a heated rear window, a radio/stereo, and central locking were all standard, while the list of optional extras included a sunroof and rear-seat refrigeration (of the passengers, not the bottle of champagne often found in a Rolls-Royce).

All of this made the 15-foot, 9-inch long, nearly 6-foot-wide 400i one luxurious, long-legged Grand Tourer. Grand, too, was the stated fuel consumption of 9.1 mpg for urban driving and 15.7 mpg at a constant 75 mph—and less for the automatic, naturally. Luckily, Ferrari fitted a 26.5-Imperial-gallon fuel tank (about 22.1 U.S. gallons). The car’s 4,034-pound curb weight certainly limited 0-60 mph acceleration, which was around 7 seconds, although claimed top speed was a lively 156 mph for the manual, 145 mph for the auto. Despite being slower and thirstier, automatics outsold stick shifts.

Ferrari built 1,300 400i’s in total, and this one offers a few other interesting numbers. It seems that only 64 right-hand-drive. pre-late-’82 face-lift examples were made, and of those just 11 were manuals, making this a bit of a rare bird. 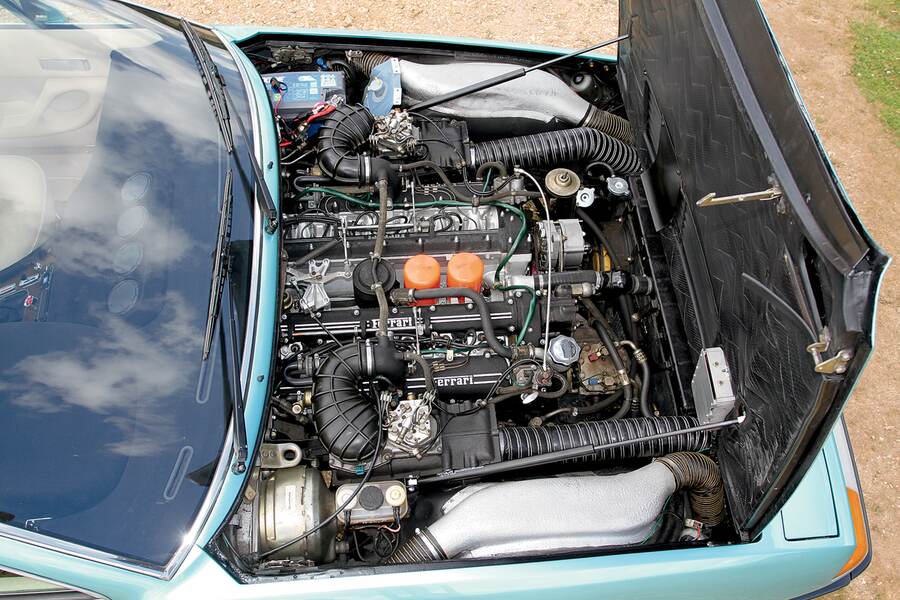 Bealey sold his 400i in January 1981, then with 11,700 miles on the clock, for £23,500, turning in quite a profit. Over the following 33 years, the Ferrari passed through six more owners who, according to the bills and records that accompanied the car, lavished serious sums of money on maintenance and repairs.

The owner who kept the 400 longest was a James Tonner from Kent. He bought it from Maranello Sales in October 1985, with 64,000 recorded miles, for £14,950. Eleven years and an extra 11,000 miles later, it was sold to one David Barr. Tonner wrote a nice letter to him in which he said, “I am glad that you like ‘MOI 400’ [as it was then registered]. Sage Green is so understated and not obvious to the Highway Patrols. I shall miss the singing sound of the engine when changing down to third. I liken it to a single-engined Cessna.”

UNLIKE AT LEAST TWO PREVIOUS OWNERS, Duval, who acquired the 89,000-mile Ferrari in May 2014, detested the car’s color. “It was diarrhea green, a sort of German Army green, it couldn’t stay that way,” he says, bluntly. “The interior was beige with green inserts but the leather was like cardboard. It was very cheap stuff, ugly, terrible.” 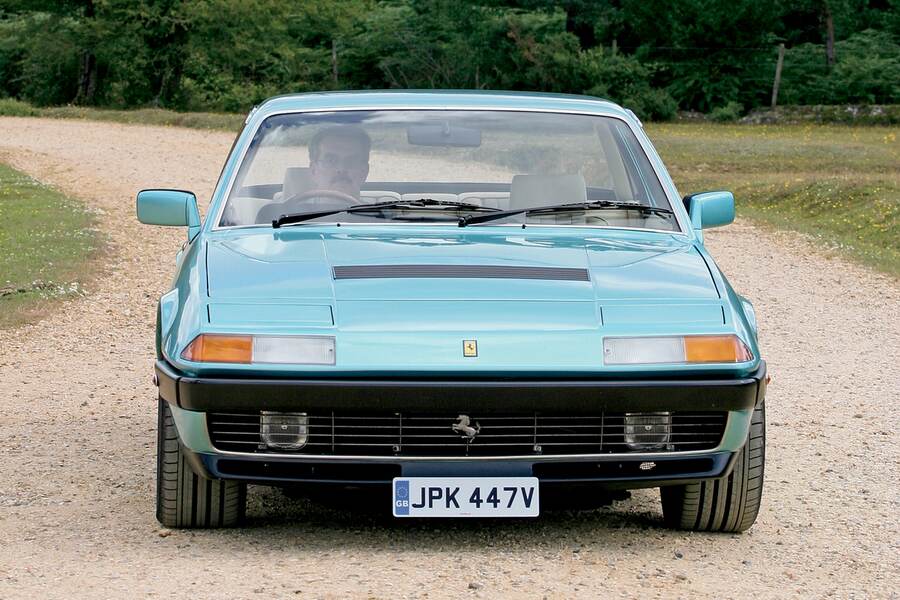 With his professional hat and long-time dream firmly in place, he hatched a vision for the car and set about finding the right people to help him achieve it. “I only wanted the best,” he says. “I wanted to change the shape and stance of the car. The big thing was to make the rear wheel arches look like the front ones. On the standard 400, they are low and ugly. When you make the rear arches the same as the front, it transforms the car.”

The body modifications were entrusted to XK Engineering of Coventry, which actually specializes in Jaguars. Is that where the paint color came from? Apparently not.

“I once saw a Ferrari 275 GTB in London in this color and I fell in love with it,” Duval recalls. “It’s a very unusual color; it’s bright, it’s summery, it’s California. I sat with the painter at XK for an hour mixing colors until I got this. It leaves me with a slight problem, which I completely overlooked: If I have an accident, how the hell am I going to match the color? 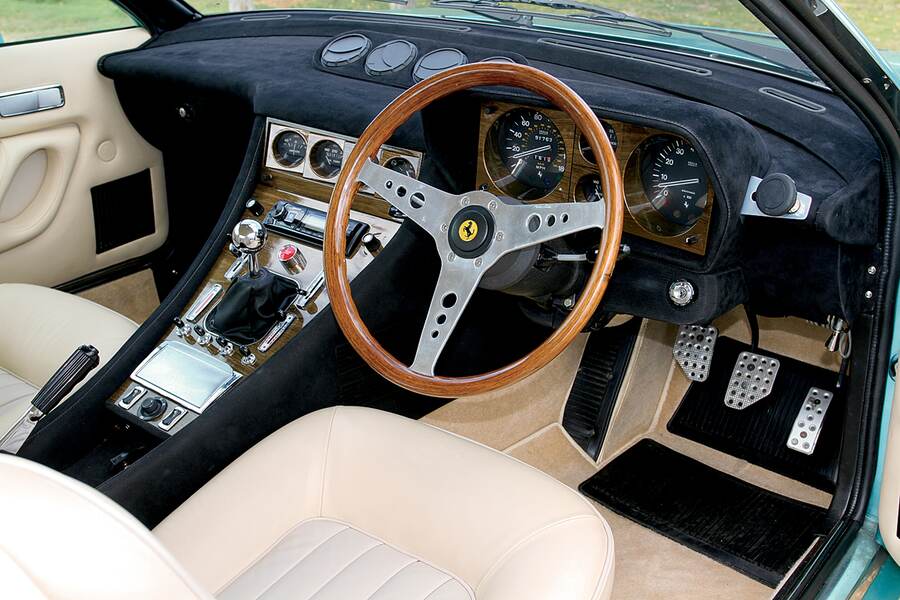 “Harry, one of their older and most experienced panel beaters did the arches,” he continues. “He was a magic bloke. He made a cardboard template from the front wheel arch to match up the rear. He did a great job. You just can’t see where he did it.”

New metalwork and paint were only part of Duval’s vision. Next, he lowered the car 20 mm by fitting a slimmer version of the aluminum spacer that sits at the top of each shock, then bolted on a period set of 18-inch Compomotive split-rim alloy racing wheels. The wheels measure 245 mm front and 285 mm rear, against the original 15-inch wheels’ 215 mm at both ends.

“I also wanted to change the mirrors,” says Duval. “I now have period angular Porsche electric mirrors, which suit the style of the car, and you can actually see out of them, unlike the horrible black plastic originals. The car now has a much racier look.” 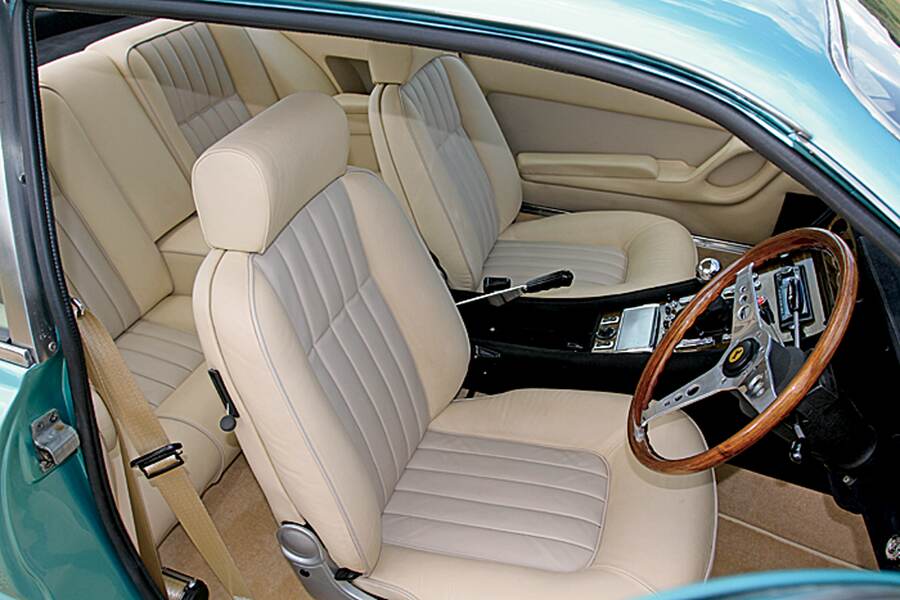 For the mechanical overhaul and engine work, Duval turned to Ferrari specialist Geoff Shilton of Shiltech Performance Cars in Loughborough, Leicestershire. “It took me some time to find the right person for the engine,” Duval says. “Geoff Shilton has been one of the world’s leading specialists in the 330 P3 and P4s. What he did with the engine was simply to make it breathe properly.”

What specifically are we talking about? “Blueprinting, balancing the crank, gas flowing, slightly higher compression pistons, and he tweaked the injection, which was very restricted,” Duval says. “So it’s gone from about 300 bhp to 400 bhp. That’s not dangerous and the crank can take it forever. I am very pleased with Geoff’s work. He told me four simple rules for the engine: Don’t rev it too low, don’t rev it too high, use the correct oil, and change it regularly. Then you’ll be fine.”

OJZ Engineering of Newark, Nottinghamshire fabricated the high-quality, and very expensive, stainless-steel exhaust. With three silencer boxes per side, the resulting song is glorious but not too loud. 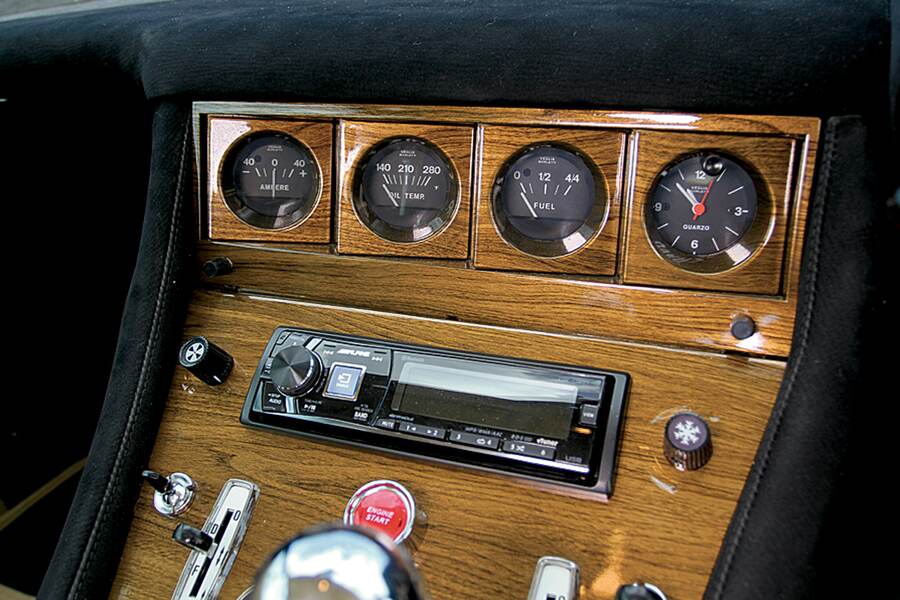 “The sound is beautiful, but not aggressive,” enthuses Duval. “It’s like a church organ.”

Following a recommendation from Shilton, Duval asked Graham Dean of Ilkeston, Derbyshire to fashion the interior. “This is the last car he did before retiring,” Duval notes.

The interior’s top-notch, supple German leather is a subtle two-tone mix of Nappa Vanilla and Nappa Sahara Beige. The carpets are beige Wilton made by Boyriven Ltd. of Andover, Hampshire. The original dash and surrounds had turned into a sticky mess, so were covered in classy black Alcantara. The old black seat belts were replaced with a new beige set. 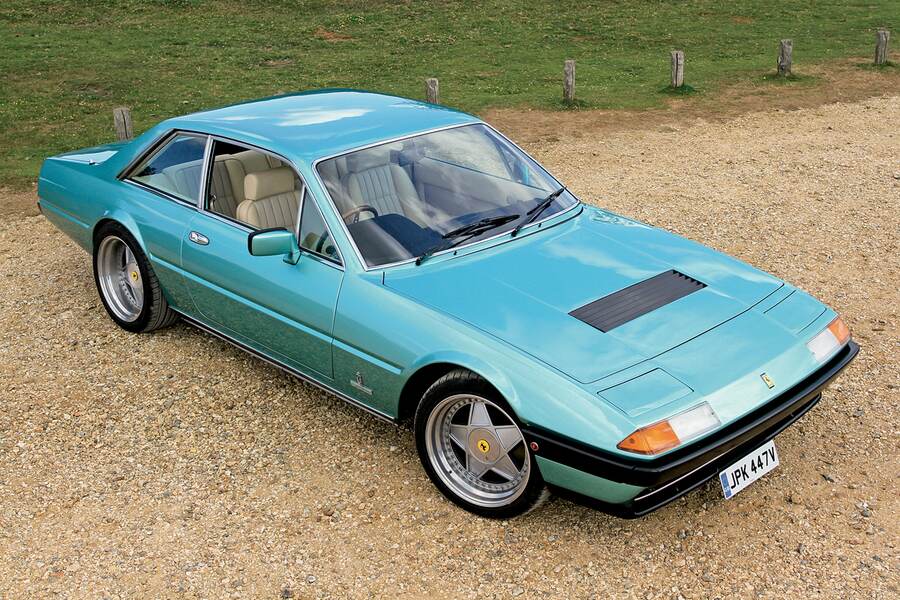 The once-black plastic instrument panel and binnacles now appear to be high-gloss wood finish, matching the center console, but it’s an illusion. The original pieces have been subjected to a water-printing technique which turns out results that look like the real thing. Elsewhere, an Alpine stereo, an iPhone holder, a three-spoke, wood-rim Moto Lita steering wheel, a chrome gear knob, and a set of racy foot pedals add the finishing touches to the interior. Finally, Duval commissioned a custom-made “400i Speciale” badge to apply to the rear deck.

THE COMFORTABLE FERRARI’S DRIVER’S SEAT is a pleasant place to be. Outward visibility is excellent in all directions due to the slim body pillars and large expanses of glass. The steering wheel and gear lever fall nicely to hand, the main instruments are clear, and the supplemental gauges angle in towards the driver.

On the other hand, the pedals are slightly offset to the right and the clutch is pretty heavy. According to Duval, “When the gearbox is cold, it’s like a tractor. It needs to be hot before you can use it in a robust manner, but it only takes five minutes to warm up.”

Climbing into the back seats is easy enough. They are comfy and headroom is adequate, but the front seats would have to be moved forward to give an adult sufficient legroom, and climbing out isn’t nearly so easy.

“I wouldn’t drive to Marseilles with two fat blokes in the back,” says Duval in a lovely turn of phrase, noting that there’s more space than in the 365 GT4 2+2. “Two slim women, I would.”

Out on the open road, this upgraded V12 Ferrari certainly shows off a newfound turn of speed, but not in a frantic, aggressive way. It simply pulls like a train, and the power just keeps coming. It’s a proper gentleman’s express.

“I have done custom projects all my life, mainly two wheels, and this has surpassed my highest expectations,” he says. “The engine performance is wonderful, it sounds great, and the chassis is good; it feels like a racing car of the period.

“Even today the 400 is not a liked car,” concludes Duval. “It’s the last Ferrari left on the counter, maybe with the Mondial. They are not expensive to buy, especially in the U.S. where there are plenty of them. Hopefully people will look at my car and think, I can do that, too, transform an ugly ducking into a smart and very desirable car.” 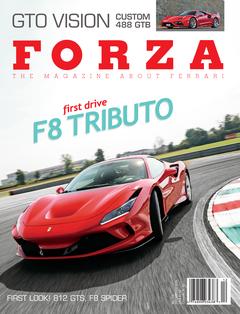