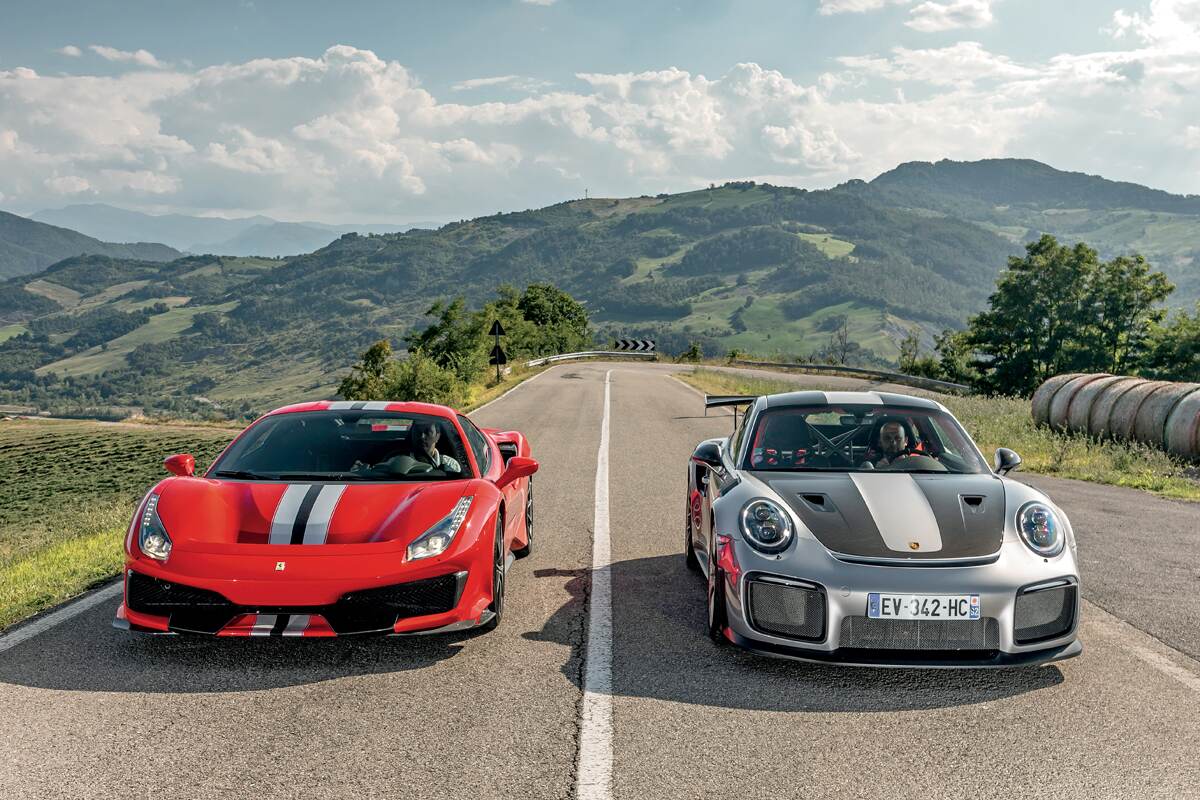 Stuttgart and Maranello have been rivals since the 1950s, when they competed for sports-car racing laurels around the world. Although the Italian V12s and German sixes rarely ran in the same class, they regularly fought for overall wins.

The same could be said of the two automaker’s street machines. While the companies held very different philosophies, and even more different price points, when the road cars lined up it was anyone’s guess who would come out on top. 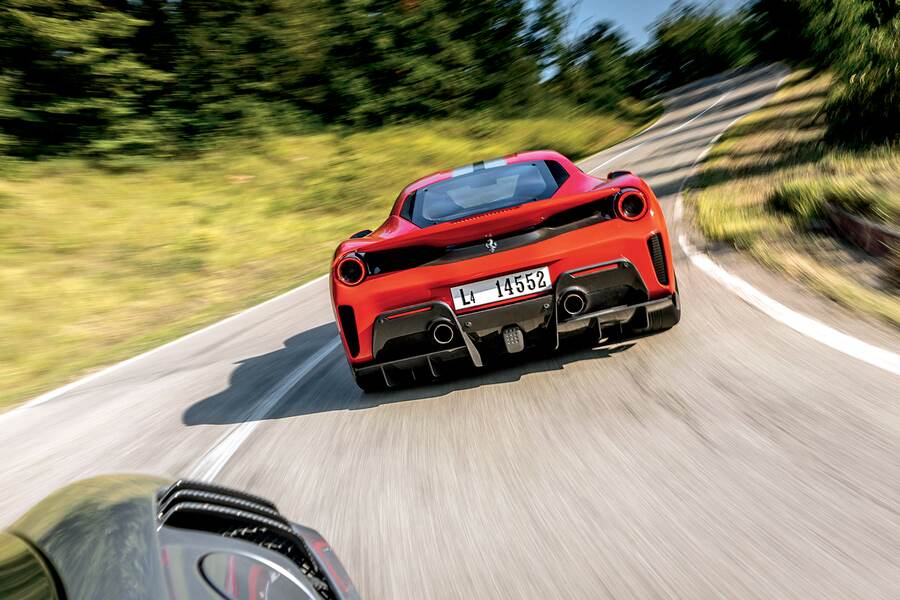 The outcome is equally impossible to predict here, in the hills of Emilia-Romagna, Italy, but this time the contestants are very evenly matched. For today we have Porsche’s astonishingly fast 911 GT2 RS (equipped with the optional Weissach Package) and Ferrari’s supercar-caliber 488 Pista.

On paper, the Ferrari appears to have a start-line advantage, with a claimed 720 horsepower to propel 3,053 pounds against Porsche’s claimed 700 hp and 3,241 pounds. In the real world, however, this is not the full story, as we have strong evidence that Stuttgart’s horses are stronger than normal ones.

Porsche has long been suspected of under-reporting its ponies, and France’s Sport Auto magazine measured the GT2 RS at a rousing 715 hp. The magazine hasn’t tested a Pista, but a few years ago it recorded 660 horses for the 670-hp 488 GTB, so it’s fair to presume this playing field is quite close to dead-level. 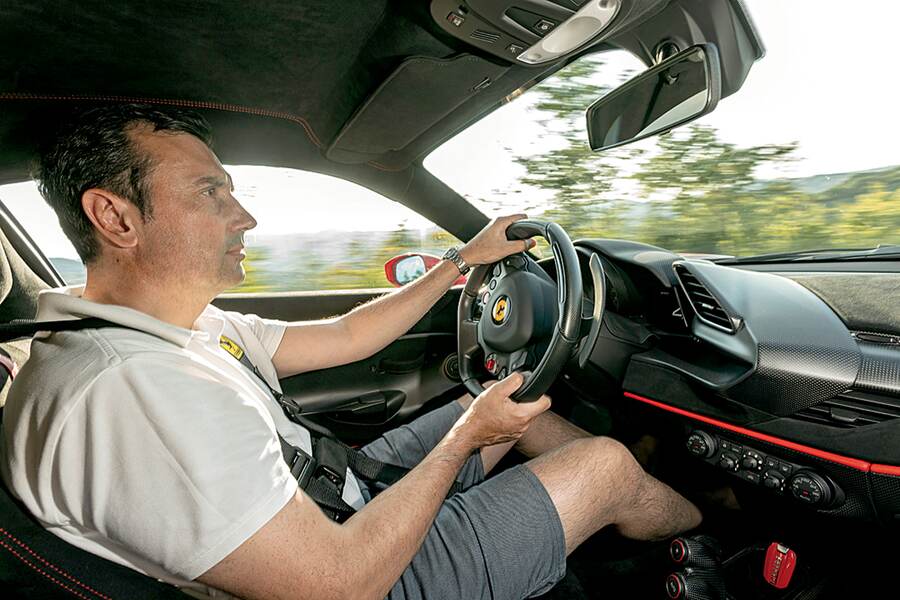 Don’t look to the two cars’ respective transmissions to set them apart, either, as the dual-clutch systems fitted in both Ferraris and Porsches these days are nearing perfection. The same can be said for each company’s driver’s aids: Rear-wheel steering and Porsche Torque Vectoring Plus in the GT2 RS fight Ferrari Dynamic Enhancer and Side Slip Control in the Pista. Stuttgart packs Porsche Active Suspension Management (PASM) against the SCM-E magnetorheological damping system from Maranello. And so on and so forth. Both cars pack pizza-sized carbon-ceramic brake discs, with Porsche calling its slightly larger version PCCB.

Before we find ourselves developing an acronym-induced headache, however, let’s state the essentials. Both the 911 GT2 RS and the 488 Pista come with the best-of-the-best hardware and software their makers can muster. The results speak for themselves: Only a claimed 0.15 second separates Porsche from Ferrari in the 0-62 mph sprint (and Maranello is widely known for understating this stat by a tenth or two) and they share a 211-mph top speed. Even the prices of the two models are within spitting distance, something rarely seen in this rivalry.

Clearly, this twin test cannot be completed by merely comparing respective spec sheets. So there’s no other choice but to jump behind each respective wheel, head out onto the roads around Maranello, and make the judgment of which is better based on the feedback gathered through my eyes, my ears, and the seat of my pants. 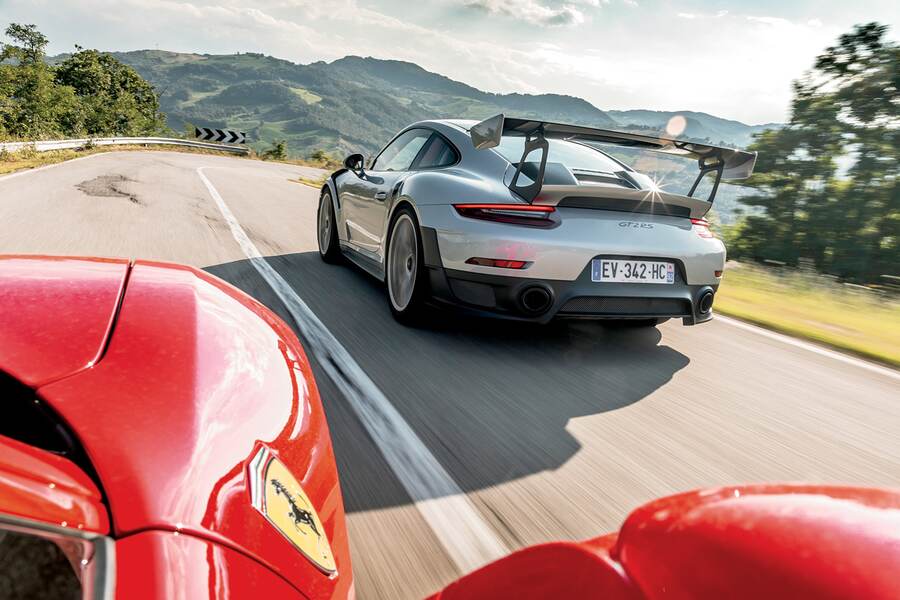 I HAVE TO CONFESS that I have a soft spot for all the normally aspirated 911 GT3s and GT3 RSs. This means I wasn’t immediately attracted to the GT2 RS—until, that is, I find myself behind the wheel of one.

It takes a very short distance to reveal the Porsche’s potential for stratospheric performance. This doesn’t come as a surprise, but the way the GT2 RS communicates most definitely does. Through the first corner, to the left, it dives into the apex and sticks there as if aided by glue. The next right-hand hairpin is proper race-circuit stuff, yet the Porsche keeps its nose planted heading towards the exit of the bend and then takes off down the straightaway like an absolute whirlwind. This flat-six powerplant gives away nothing to the motor found in the back of McLaren’s mighty 720S.

With Sport mode selected, there’s nothing “flat” about the GT2 RS’s exhaust, either. It’s not quite the same experience as the strident, 9,000-rpm wail of the GT3, but the big-caliber-cannon backfiring during downshifts makes up for any potential aural disappointments caused by the twin turbochargers. The big bass notes are just as visceral, and perhaps more ominous-sounding. 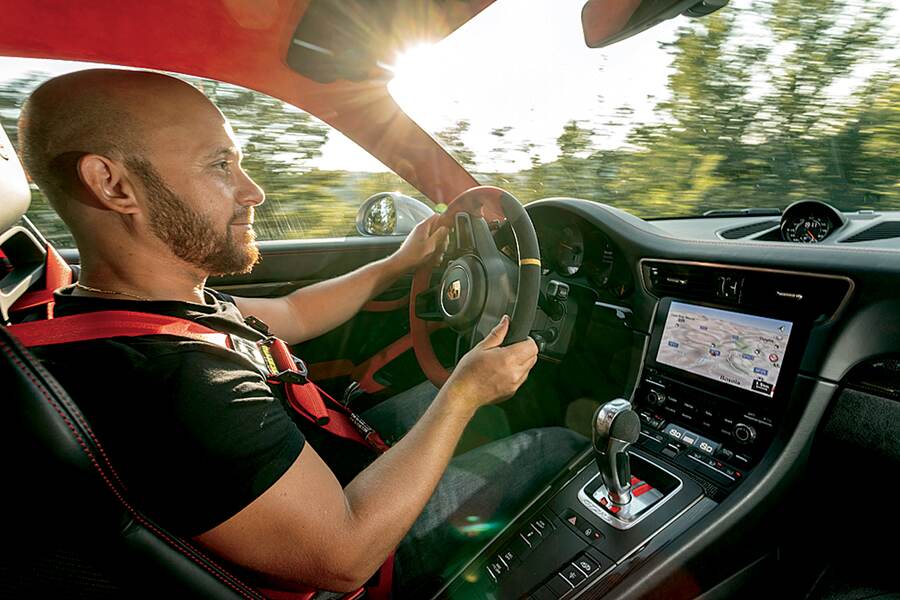 I just want to keep driving this car, keep drinking it in until well after my thirst has been quenched. I want to drive until the auxiliary cooling tank—which spritzes the intercoolers with demineralized water when necessary—is drained, too. As you’d expect of a Porsche, it just soaks up the punishment and keeps delivering, despite the heat-wave conditions that are causing the driver to wilt and the tarmac to melt. It’s a massive feat, especially since it’s not always a given even at this price point.

On the back roads that lead towards the municipality of Samone, which wriggle and whirl like a boa constrictor with a food allergy, the GT2 RS bides its time behind a big truck. When a quick look reveals the route is clear, there’s no need to change down: The 3.8-liter six’s 553 lb-ft of torque from only 2,500 rpm bury my shoulders in the backrest and force me to prepare to jump on the brakes before the next, rapidly approaching corner.

In short, the GT2 RS is a beast! And you need to have a knowledge of the basics of lion taming in order to get the best out it. The speeds it can generate with such ease require the driver to maintain a cool head at all times. 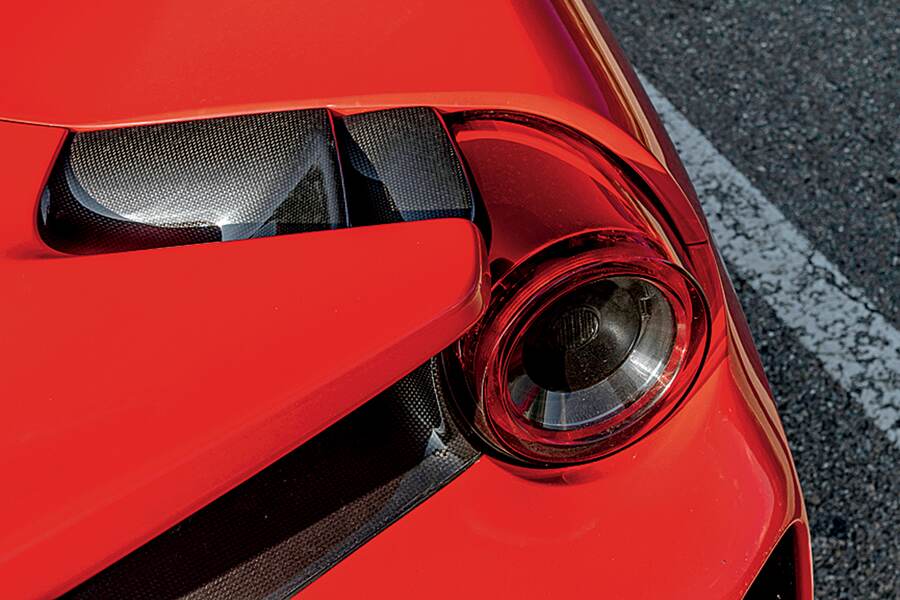 On the other hand, this super-Porsche’s utter lack of understeer in the dry means I can forget about the chassis and concentrate on my ballistic lines and dosing out that power to match (especially in the lower gears). Do this and you’ll soon be transfixed by the feeling of riding a colossal and inexhaustible wave.

The only black marks against the GT2 RS come in a shade of grey. I wish the steering was a tad more direct, and noticed the brake-pedal feel has the slightest whiff of sponginess. Otherwise, this 911 offers an almost perfect balance between performance, usability, and pleasure. It is a very fine vintage, indeed—but can the Pista do better?

COMPARED TO THE GT2 RS at startup, the Ferrari sounds throatier and angrier. But firing up the Pista’s 3.9-liter V8 has nothing in common with the cacophony produced by the normally aspirated 360 Challenge, 430 Scuderia, or 458 Speciale. The turbos muffle the high notes from the crank’s first turns all the way to the redline. It does feel a bit silly to be nostalgic about sounds from the recent past—we’re not talking about the click-clack of an open-gate shifter, after all—and besides, the level of performance on tap quickly banishes all rose-tinted thoughts of days not-so-long ago. 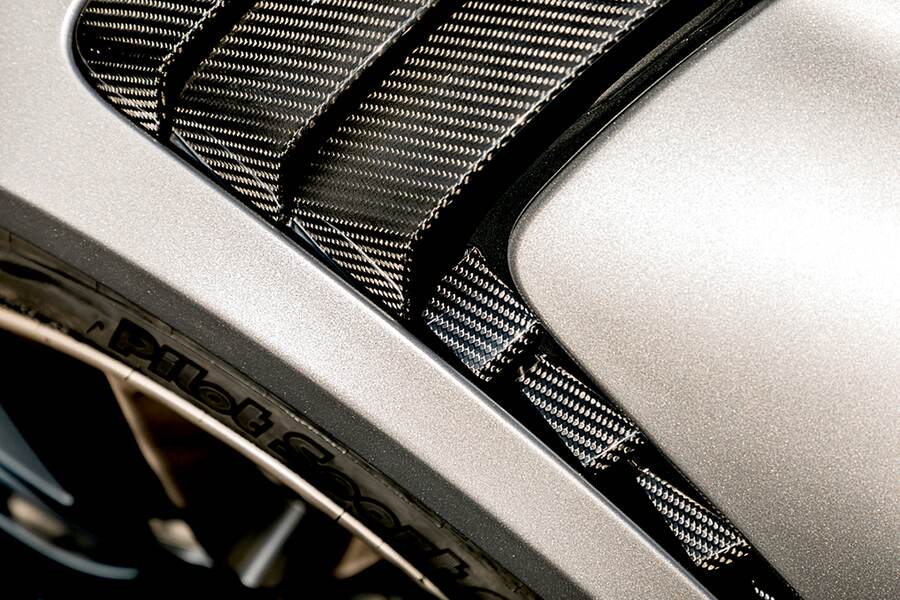 Don’t go thinking that the Pista is just a tuned 488 with a duckbill and some jazzy stickers. It’s quite the opposite. To understand just how re-engineered this car is you need to get under the paint, where you’ll find a carbon-fiber hood, fascia, and front fenders. Digging around under the rear deck reveals a load of components from the 488 Challenge race car, including Inconel exhaust manifolds, a lightweight crank and flywheel, and titanium connecting rods.

The Pista even features the Challenge’s roller-bearing turbos with dynamic rev sensors to improve spool-up. On the road, the difference from the basic 488 is marked, with much-reduced inertia when the revs are both rising and falling. There’s also a sudden, last-gasp, extra boost of power thrillingly hidden at the very top of the rev range. This is an engine in very fine fettle: It almost feels like the V8 is spinning on its own axis out of pure joy, while the lightning-fast gearbox fuels the fire with each new ratio.

If the sheer power, vivacity, and mechanical lightness make me wonder how this all can possibly hold up over time, it’s hard to worry about right now. The Pista just keeps rocketing off, seemingly going stronger and harder each time. There isn’t the top-end frenzy found in the 458 Speciale, but the sheer force with which the turbocharged engine shoves me along easily makes up for any missing “charm.” The Pista’s blood is still boiling. 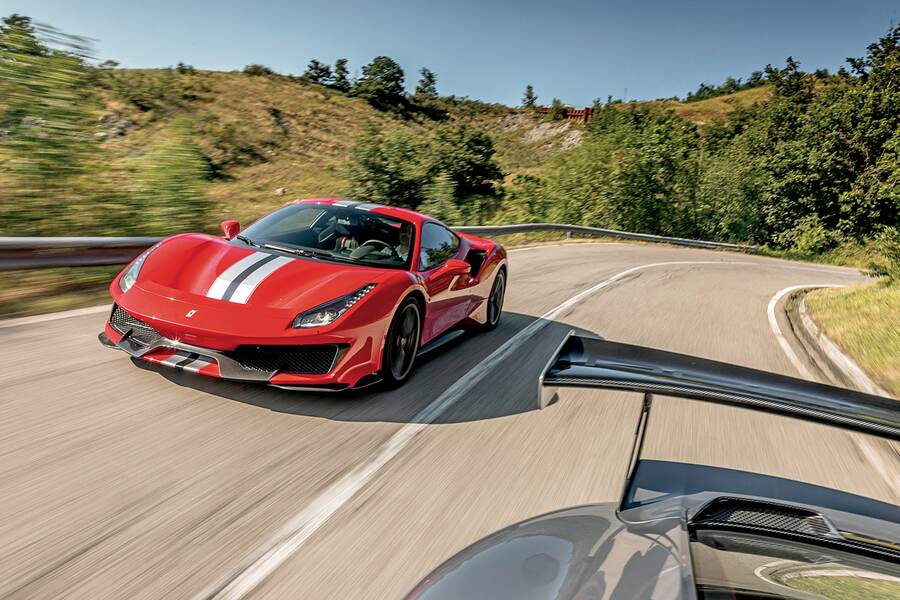 Compared to the GT2 RS’s flat six, Ferrari’s V8 feels like a more rounded engine, quicker on the draw. The same goes for the gearbox, whose modes are more intuitive than those in Porsche’s PDK. Indeed, the Ferrari’s Automatic setting borders on Artificial Intelligence.

At low speeds, the Pista is just as user-friendly as the GT2 RS. As the pace increases, though, the Maranello car just gets sharper and sharper. Its braking and steering also feel better and more natural. Over a long series of corners near Samone, the difference is like night and day. To illustrate simply, the Porsche’s steering could be described as being from a “normal” car, whereas the Ferrari’s feels like it’s from a racing go-kart.

Furthermore, where the GT2 RS can occasionally provide the tiniest hint of a reminder of understeer, that very notion simply couldn’t be understood by the Pista’s computers. While the Ferrari lacks the Porsche’s rear-wheel steering, Ferrari Dynamic Enhancer, which gently applies the inside calipers to make the car pivot more keenly into corners, combines with the Pista’s stability control and active suspension to the same, if not subtly better, effect. 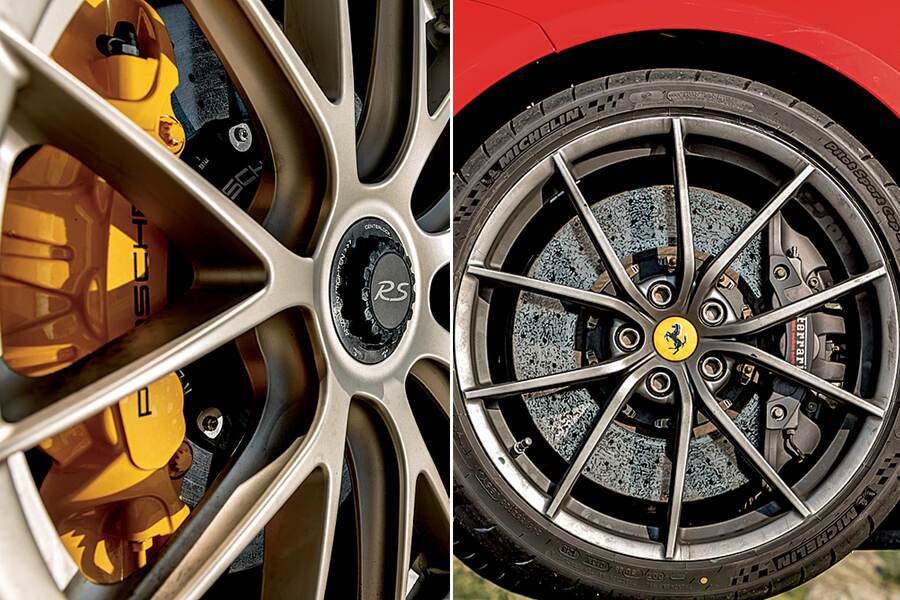 In the purest Maranello tradition, the working of all these electronics is virtually invisible to the driver. The Pista’s reactions are predictable and intuitive, which basically summarizes what this Ferrari does so well: Not only does it push the performance boundaries, at the same time it allows the driver to get closer to them.

When two of the world’s great sports-car brands go head to head, the debate goes far beyond the spec sheets. Never before have power, effectiveness, and single-minded performance been available in such usable packages. The Ferrari and Porsche are both masterpieces that have gotten dangerously close to automotive perfection, and picking a winner therefore comes down to the details. However, the choice here is clear.

As much as my cage was rattled by the bombastic 911 GT2 RS, the 488 Pista wins this contest. It may be a cliché, but the Ferrari can match or beat everything the Porsche has to offer and do so with more feeling, more emotion. The Pista is a sharper, finer, more communicative machine than its rival. Luca di Montezemolo would be proud. 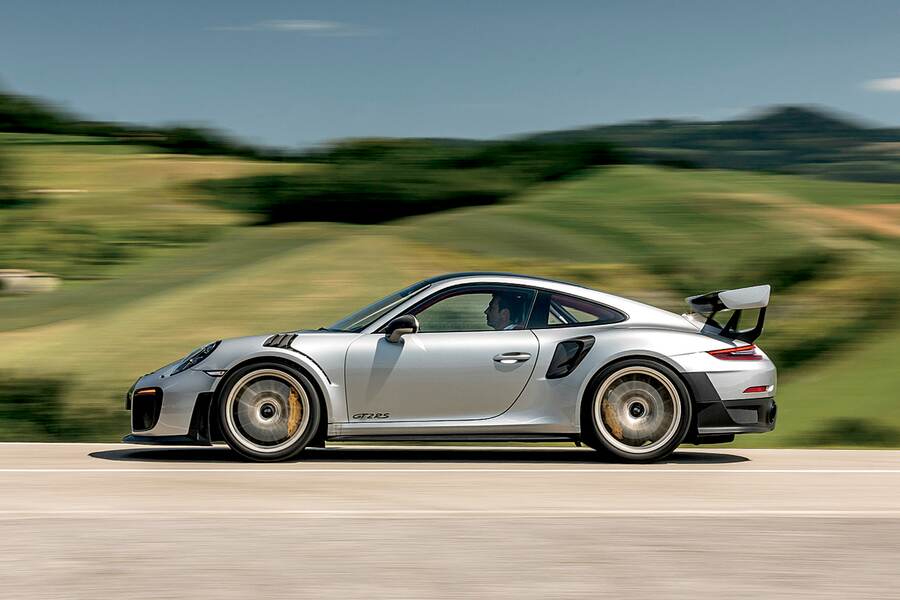 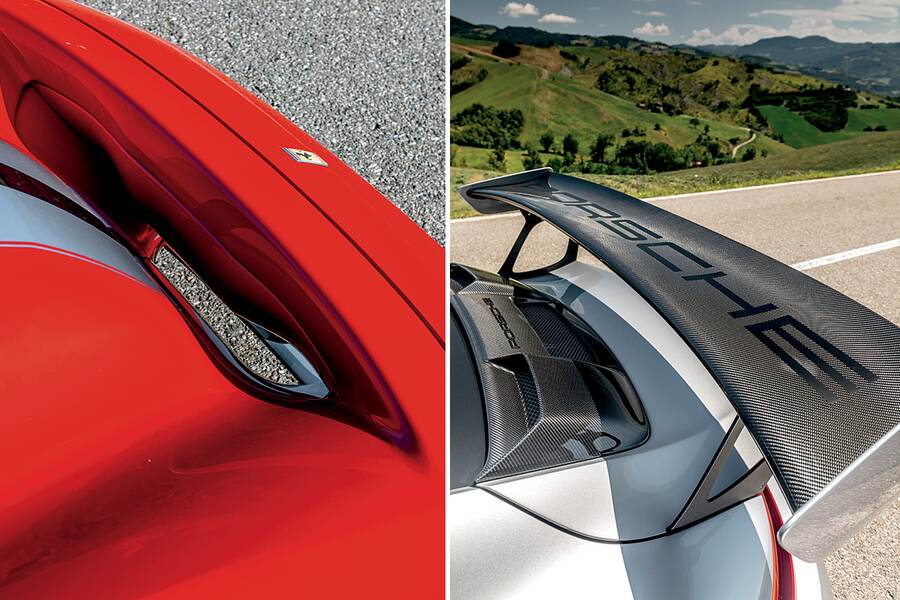 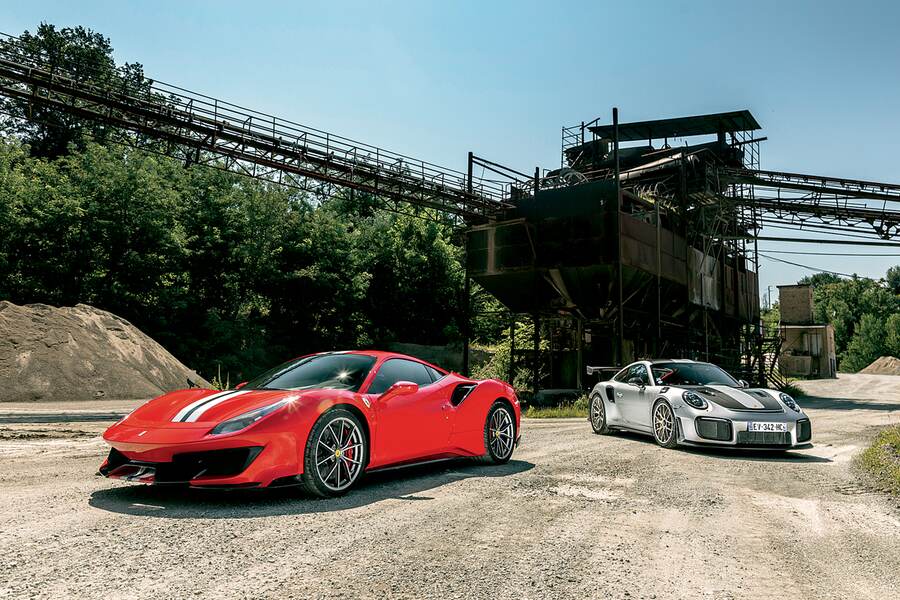 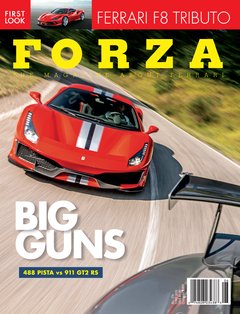