This 290 MM made news when it went to auction in December 2018—but the real story occurred more than 60 years earlier. 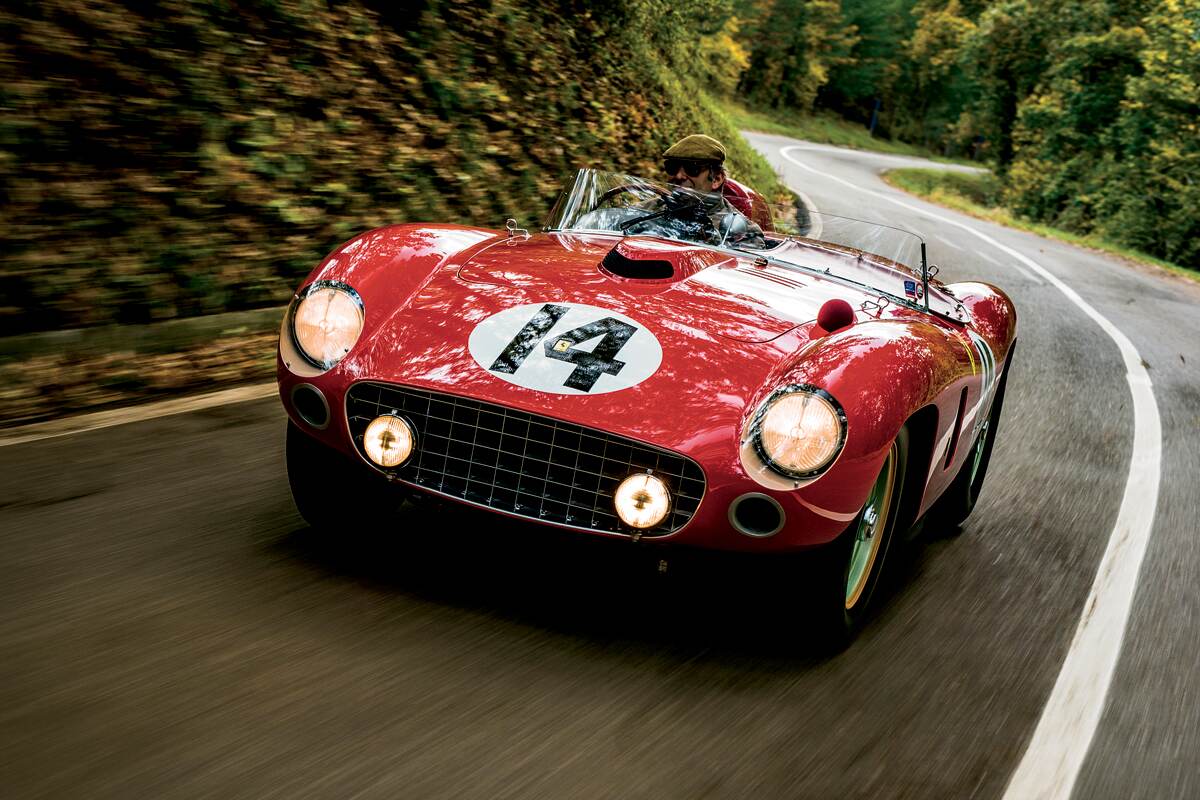 Few automobiles catch the attention of serious collectors more than a Ferrari. Even fewer can pull top headlines like a rare and successful Prancing Horse from the golden age of racing. So when RM Sotheby’s and the Petersen Automotive Museum got together to auction off just such a halo car, most pundits predicted a top-ten highest price—ever.

The early December setting could not have been more typically Los Angeles, with clear, blue skies and temperatures in the low 70s. The weather was warmer inside the recently remodeled Petersen, with a handful of carefully selected star cars staged inside the lobby. (A few dozen more were artfully arrayed in the parking garaged.) And carefully situated near the auction room, ready to lure a buyer from the 350 bidders and spectators on hand for the last major public auction of the year, was the hero of the night: a 290 MM (s/n 0628).

This Ferrari has lived an unquestionably charmed life. In its youth, it was campaigned by Scuderia Ferrari for the 1956 and ’57 seasons and driven in Europe’s storied races by the likes of Juan Manuel Fangio, Phil Hill, and Olivier Gendebien. A few years ago, it received a full-bore restoration by the Ferrari factory, after which it spent some time on display in nearby Ferrari museums. Now it was time for a new caretaker to claim his or her prize. 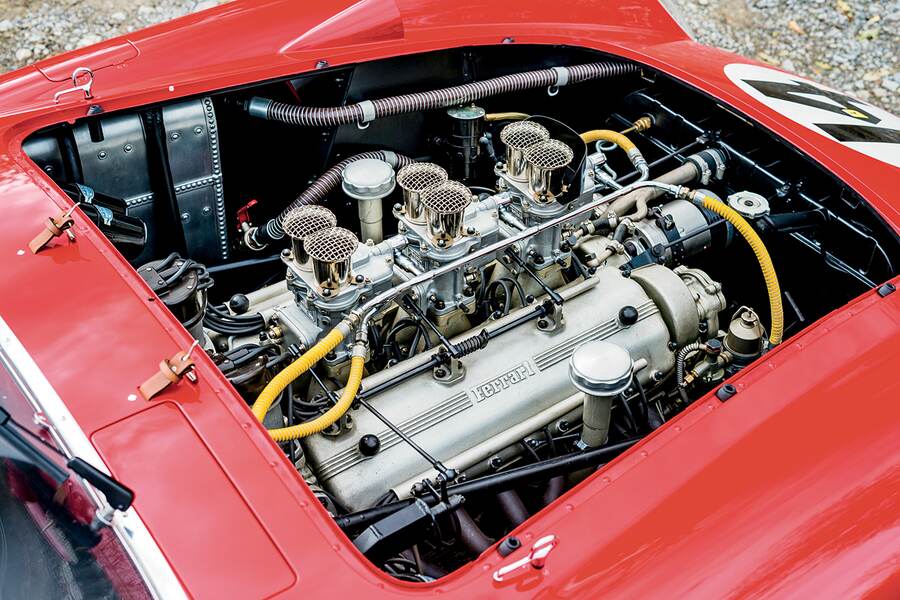 S/n 0628 started life with 3.4-liter four-cylinder engine, then received V12 power for the 1957 season; its current engine was fitted prior to that year’s 12 Hours of Sebring.

THE 290 MM WAS DEVELOPED to contest both the 1956 World Sports Car Championship and Italy’s prestigious Mille Miglia—hence the MM moniker. Enzo Ferrari was determined to reclaim dominance over perennial competitor Mercedes-Benz and hometown rival Maserati; it was an important to him as winning the Formula 1 World Championship.

S/n 0628 was built specifically as a works car—just not as a 290 MM. Instead, it entered its first race, the 1956 Mille Miglia, as an 860 Monza. Driven by Peter Collins, with famed photographer Louis Klemantaski snapping away from the passenger’s seat, our featured car finished a fine second overall behind Eugenio Castellotti in a 290 MM. Even more impressive, Ferrari swept the April race’s top-five spots, thanks to two other 290s and another 860. 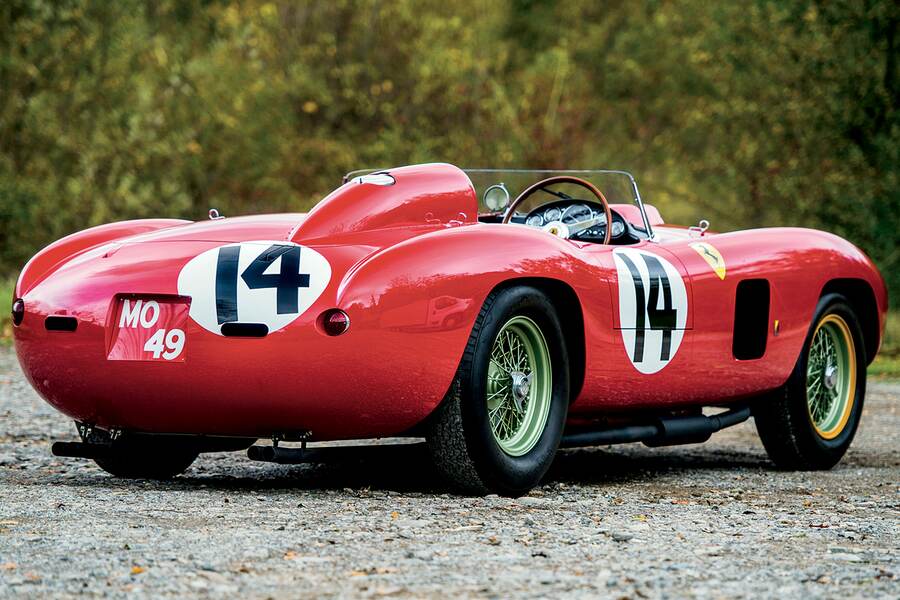 Dual exhaust pipes were added along with V12, as four-cylinder engine used only one.

S/n 0628 dropped out of its next race, the Nürburgring 1,000-kms in May, where it was driven by Alfonso de Portago and Olivier Gendebien. The following month, Gendebien was joined by Hans Hermann for the grueling Targa Florio; they finished fourth overall.

Gendebien took the wheel again in July, when he and Jacques Washer drove to second-place overall in the Coppa d’Oro delle Dolomiti. Later that month, Umberto Maglioli scored his own second-place finish at the Aosta-Gran San Bernardo hillclimb. The car’s impressive season ended on a sour note, however, when engine problems knocked Castellotti and Juan Manuel Fangio out of the Swedish Grand Prix in August.

Early the following year, the factory decided to remake s/n 0628 in a new image. The four-cylinder Monza engine and transaxle were removed, replaced by a new, dry-sump Tipo 130 3.5-liter V12 with highly developed cylinder heads, high-lift camshafts, twin ignition, and 9:1 compression. A new, four-speed Tipo 520 transaxle completed the powertrain makeover. With these and a few other upgrades, including new bodywork, the reborn 290 MM was once again ready to race at the highest level. 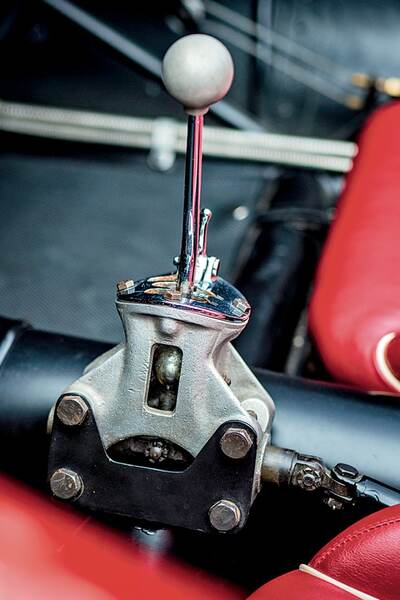 In January 1957, s/n 0628 was shipped to Argentina for the 1,000-kms of Buenos Aires. There, go-to factory drivers Collins, Portago, and Castellotti finished a respectable third overall, two spots behind the winning 290 MM of Masten Gregory, Luigi Musso, and Castellotti (who had actually driven three different Ferraris during the event).

In February, the engine used in Argentina was removed and installed in a different car. In the meantime, s/n 0628, now powered by a different Tipo 130 engine and wearing a new nose with polished aluminum brake ducts, travelled back across the Atlantic, this time to Florida. Phil Hill and Wolfgang von Trips drove the Ferrari in the sixth edition of the 12 Hours of Sebring, but unfortunately dropped out around halfway with battery issues.

Sebring marked s/n 0628’s final race for the factory, but the Ferrari soon found its way back on track under private ownership. U.S. Ferrari importer Luigi Chinetti connected the car to enthusiast Jan de Vroom, who reportedly traded in his 500 TRC for it. 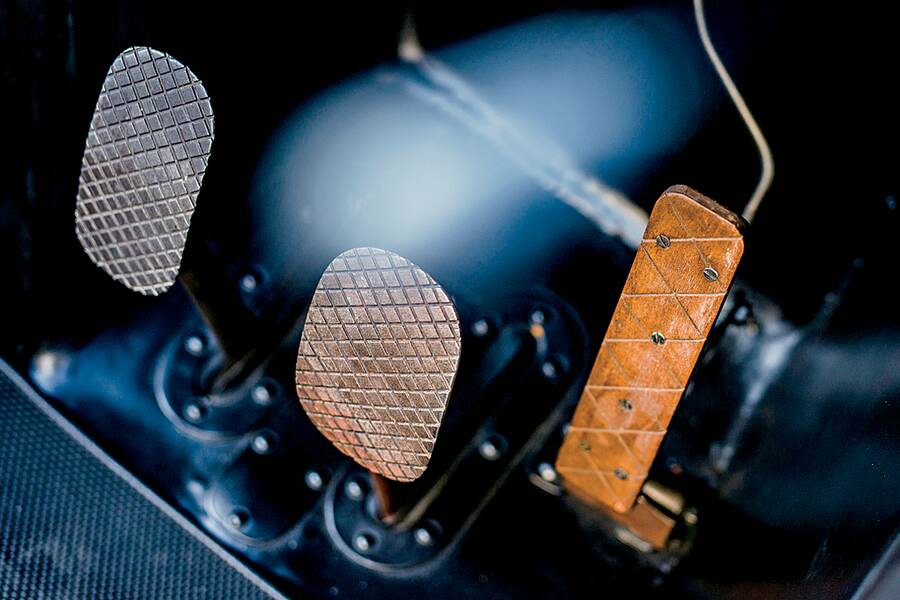 De Vroom’s first event, the Swedish GP, ended in crash, after which s/n 0628 returned to Maranello for yet another new nose, this one in the style of the pontoon-fender Testa Rossa. He finished 13th in his next race, the Governor’s Trophy at Bahamas Speed Weeks in early December, then passed the 290 MM back to Chinetti. Chinetti quickly sold the Ferrari to Temple Buell, who immediately put Stirling Moss behind the wheel for the Nassau Memorial Race and Nassau Trophy—both of which the Briton handily won.

Chinetti reclaimed the Ferrari after Nassau and would keep it for the next two years. During that time, he displayed s/n 0628 at the ’58 Chicago Auto Show and entered it in a Formula Libre race at Watkins Glen, where Dan Gurney drove it to second place overall.

In 1960, Chinetti sold s/n 0628 to George Reed, who raced it around the Midwest for a couple of years. By the end of the decade, the Ferrari had found its way back to the Chinettis, who ended up storing it in a warehouse until the early ’80s. They then pulled the car out of storage, had it restored by Francois Sicard, and kept it for another decade and a half before finally selling it to collector Jon Shirley. Shirley had the car restored once again, then drove and showed it for another decade before selling it on to Englishman Hugh Taylor. 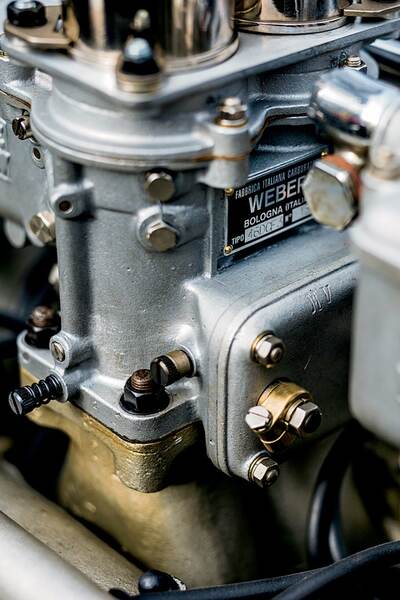 In 2014, a later owner sent the Ferrari home to Maranello to be restored once again, this time by Ferrari Classiche to its Sebring ’57 specification. (Happily, the engine installed prior to that race still resided under the hood.) The restoration was completed in 2015, after which it was shown at that year’s Amelia Island Concours and the Finali Mondiali. For the following two years, s/n 0628 was displayed at both the Museo Ferrari in Maranello and the Casa Enzo Ferrari museum in Modena. All of which leads us back to the Petersen on December 8, 2018.

I DIDN’T HAVE THE OPPORTUNITY to spend much quality time with s/n 0628 before the auction, but what time I did get was well worth it. What a magnificent car!

While it’s not as exotic as many of the more recognizable 250 Testa Rossas, it slides nicely into the “middle” of the TR spectrum, with sleek styling and smooth curves. With a little anthropomorphizing, it’s easy to see the covered headlights (paired with flush-mounted aluminum cooling ducts) as eyes and the egg-crate grille as a smirk, as if this Ferrari knows it’s fast. The hood’s cowl reflects this sense of power and speed, and stands nearly as tall as the cut-down windshield. The muscular rear fenders hunches up ever so slightly, as if the massive fuel tank inside has caused them to bulge, while the dainty taillights are barely afterthoughts. Going fast is what it’s all about. 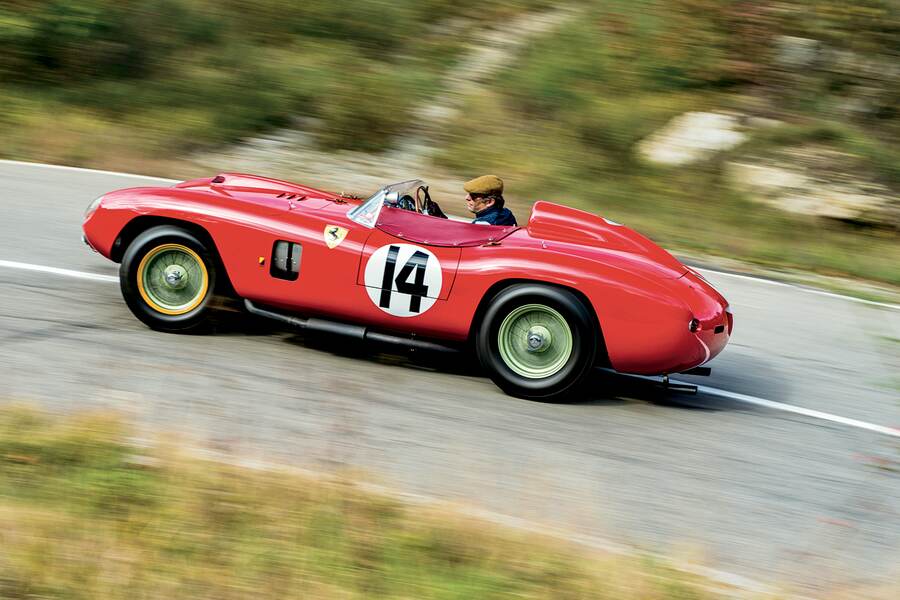 Thanks to its 2014 restoration, s/n 0628’s body is laser straight—and yes, it probably is in much better condition than when it first left the factory, or certainly before the start of any of its historic races. In this case, though, it’s over-restored but simply consistent with today’s standards and expectations.

Elsewhere, Ferrari Classiche’s attention to period-correct detail, no doubt assisted by its cache of original factory records, impresses, from the yellow-edged front wheels and glass Marchal fog lights to the perfectly sized, brush-painted (!) numbering on the door and hood. One can only presume the same level of care was given to the thousands of other details, whether the leather on the seats, the exposed wiring in the cockpit, or the mesh that tops the V12’s velocity stacks.

Inside the auction room, there were only a few cars left. S/n 0628 would be the final lot offered, and there was a gentle buzz of anxiousness to reach it. Finally, it was time, and the bidding opened at $10 million. Cheers and applause rang out as the bids quickly climbed to $18 million, then quieted as bidders dropped out and the increments fell. Finally, the hammer fell: The Ferrari had sold at an even $20 million ($22 million after fees). 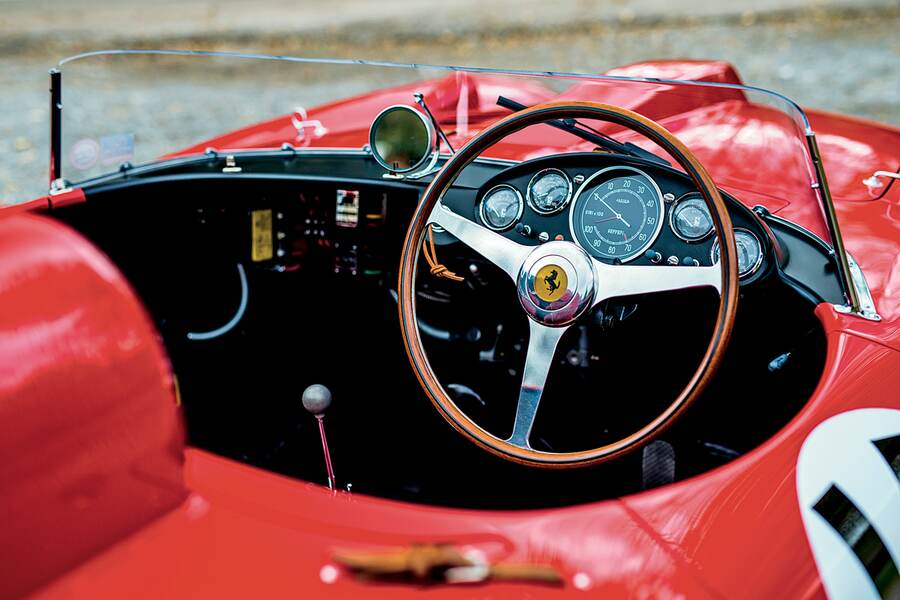 By some estimates, this makes s/n 0628 the 11th most expensive car ever sold at auction. It’s definitely the second most expensive car auctioned in 2018, with another Ferrari, a 250 GTO (s/n 3413GT), holding the year’s top spot. Looked at another way, though, how can you call the opportunity to own a such a rare and intriguing piece of Ferrari history anything but priceless? 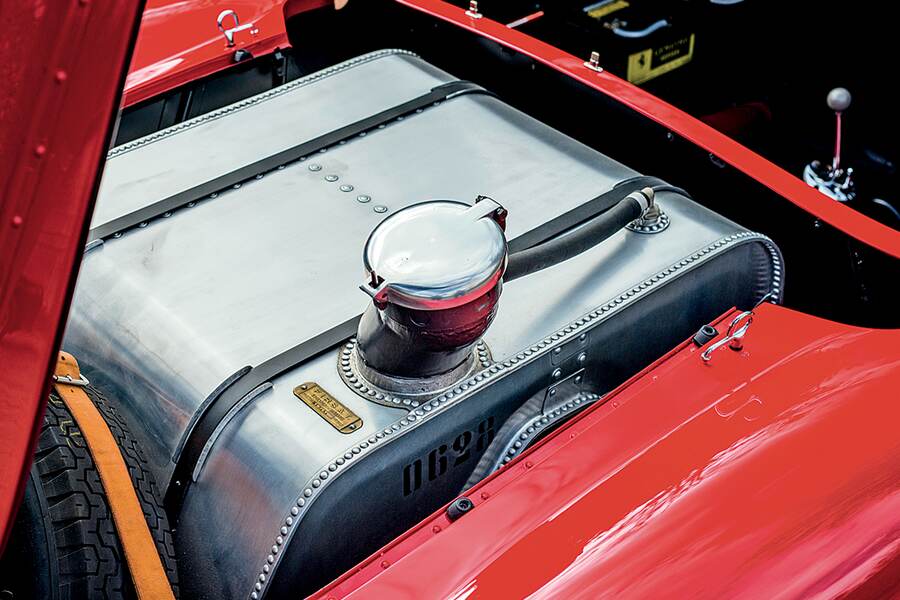 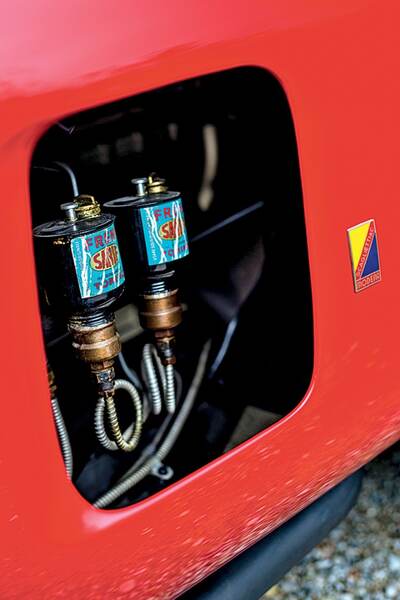 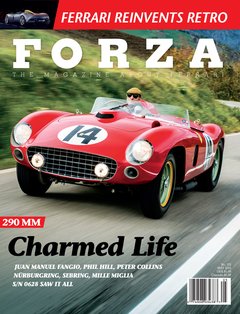