More than 50 years after its last race, this 735 Mondial is about to return to competition. 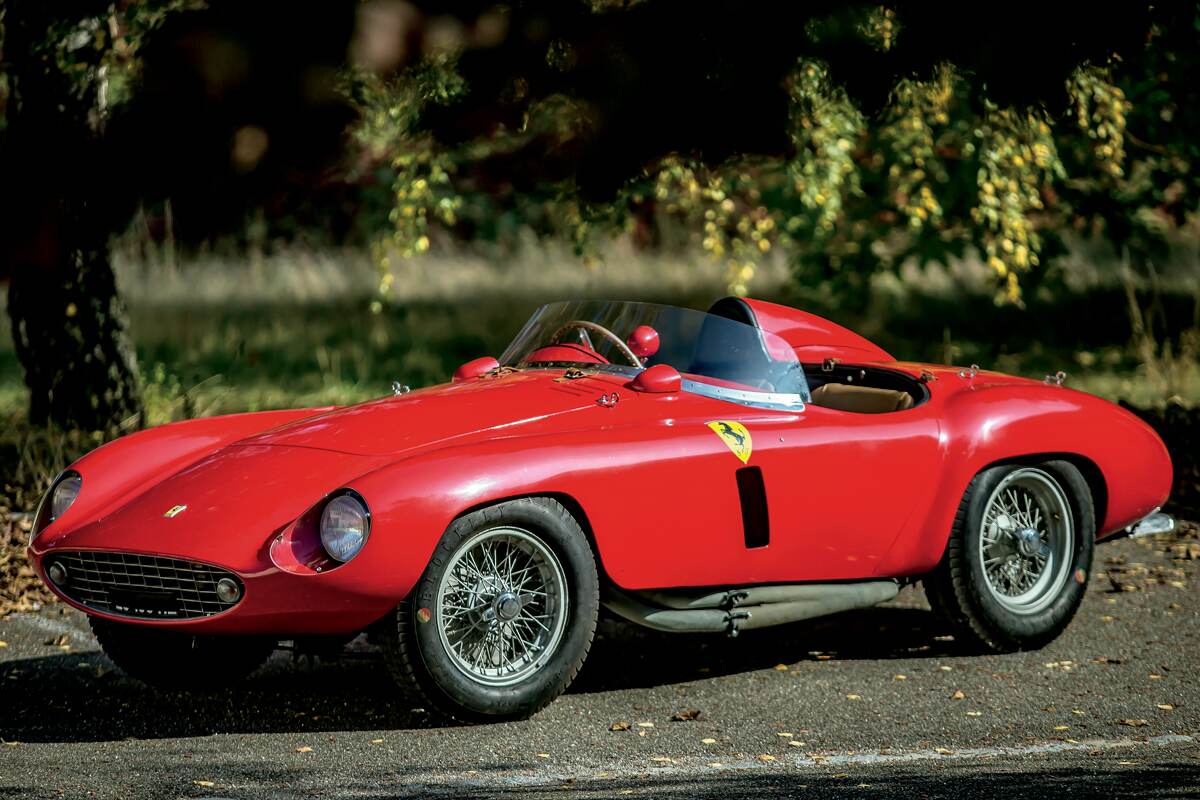 Every tifoso worth his or her salt knows what a 500 Mondial is—but not many will be familiar with the 735 Mondial. Ferrari built just three examples of the latter, which features a 2,940cc four-cylinder engine, and one of this trio is about to return to public roads for the first time in 55 years.

On the outskirts of the French city of Strasbourg, in the workshop of HH Carrosserie, with the deafening sounds of a half-dozen mallets pounding out sheet metal into classically curving body panels, this gorgeous Ferrari sits in surroundings probably very similar to those in which it was created. And it is stunning. While Enzo Ferrari himself famously praised the Jaguar E-Type as the most beautiful car in the world, looking at this Mondial, with its divine curves, makes me inclined to disagree.

In addition, the 735 is both powered by the same Aurelio Lampredi-designed inline-four fitted to Alberto Ascari’s World Championship-winning Tipo 500 and equipped with a version of that car’s advanced de Dion rear axle. As pretty as the E-Type was, its mechanicals were nothing special. 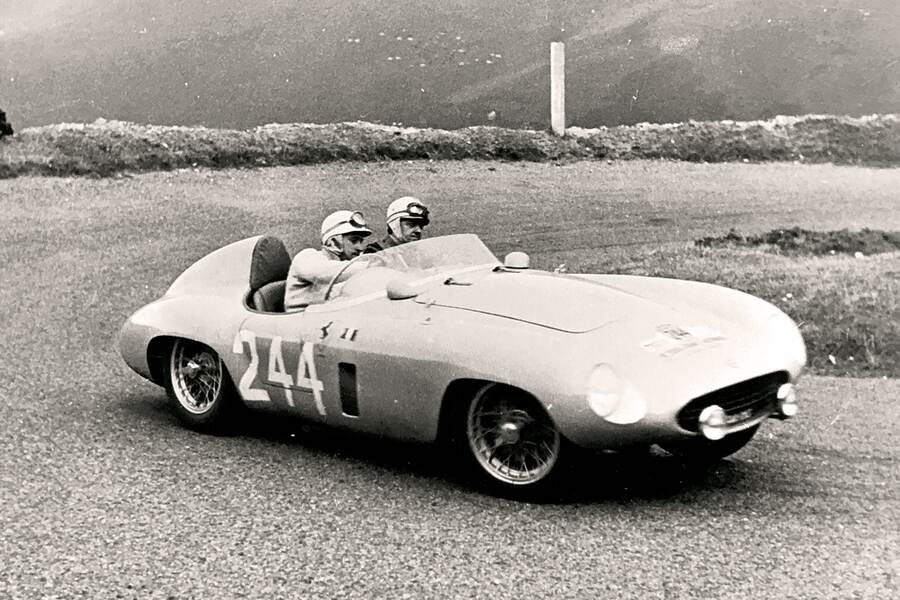 Despite being in the final months of a painstaking 17-year (!) restoration, our featured Mondial (s/n 0556MD, but originally stamped 0446MD) wears its life story proudly. It has holes drilled into its dented bodywork, courtesy of races on three continents, a heavy crash, an unusual face-lift by a storied designer, and the man who’s owned it for the last 40 years.

S/N 0556/0446’S STORY starts in early 1954, when it was sold to French driver François Picard, who requested the unique swivelling vent scoops in front of the windshield to help with cabin cooling. Picard’s first outing was in September’s Tour de France, a huge circumvention of the country held on rally stages and racing circuits that was one of Europe’s premier events. Unfortunately, his Tour ended with a DNF.

Picard had more luck the following month at the Penya Rhin Grand Prix in Barcelona, Spain. There, he won the event ahead of a pair of Jaguars, one of which had finished fourth overall at the previous year’s 24 Hours of Le Mans. In early 1955, with Picard’s friend Paul Maret driving, s/n 0556/0446 went racing in Africa, first at the Circuit d’Agdir in Morocco and then in the Grand Prix de Dakar in Senegal. After that, Picard took it back to Italy and traded it in on a Series 2 500 Mondial. 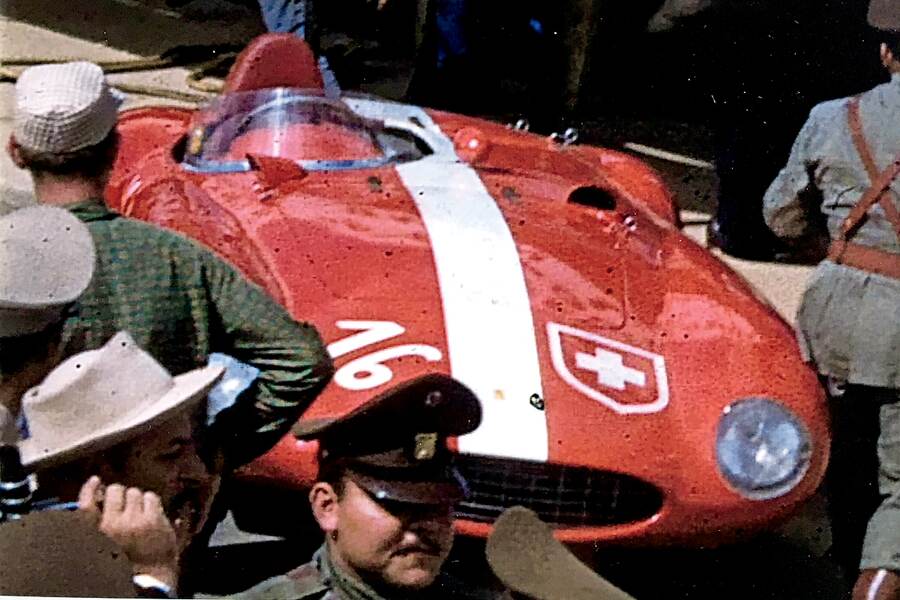 In the 1950s, France had very high importation taxes on luxury goods. Ferrari, wanting to help a valued client avoid having to pay what would today be tens of thousands of euros in duty, helpfully stamped his new 500 Mondial the same 0446MD serial number so that the border guards would assume Picard was bringing home the same car he had left with. [You can read more about the second s/n 0446MD in issue #37’s “La Bella e le Bestia.”—Ed.]

While back at the factory, the 735 Mondial received the serial number originally intended for Picard’s 500 Mondial—0556MD—on its engine block and subframe. An 0446 stamp on the de Dion axle was missed, however, and is still visible today.

The 735’s next owner was Swiss Andre Canonia, who both drove it himself and lent it to other drivers. In 1956, s/n 0556/0446 was taken to South America, where Emmanuel de Graffenried raced it in the Venezuelan Grand Prix in Caracas. There, the two Mondials with the same serial number competed against each other for the only time. Graffenried finished a credible third in the 735 behind a Maserati 300S and a 750 Monza, while the factory-supported 500 Mondial came home in fifth. 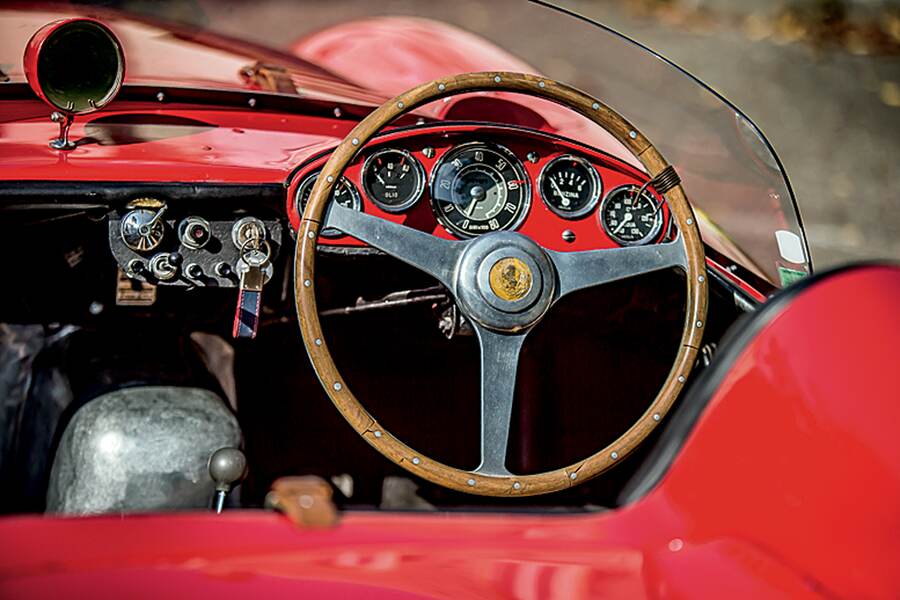 S/n 0556/0446 soon returned to Europe, where Portuguese driver Felipe Nogueira entered it in the 1956 Grand Prix of Porto. But the local talent crashed and rolled the Ferrari. The bodywork was repaired in Portugal, then the 735 was sold on to another privateer, Swiss driver Gerard Pittet.

Over the next two years, Pittet piloted the car to several class and overall wins in Swiss and French hillclimbs and circuit races before selling it. S/n 0556/0446’s next two owners drove it in local hillclimbs as well as some 1-kilometer events similar to drag races. The Ferrari’s exceptionally long first gear allowed the driver to reach 90 km/h (about 56 mph) before shifting to second, giving a competitive advantage on short and/or tight courses. 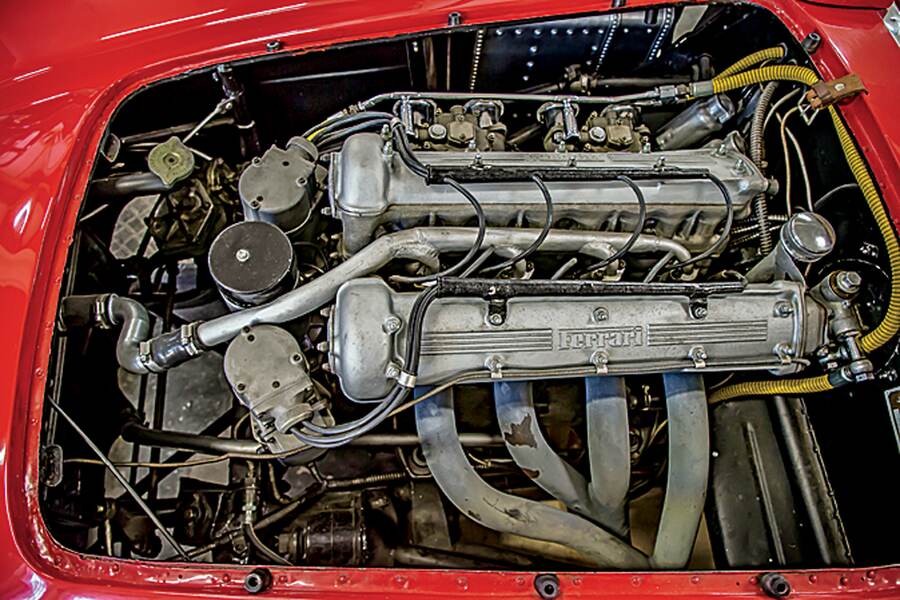 BY EARLY 1963, s/n 0556/0446, which wasn’t in very good shape and had become too unreliable to compete in any serious events, found itself stored in Jo Siffert’s garage in Fribourg, Switzerland. There it remained until 1968, when it was purchased by famed French Ferrari collector Pierre Bardinon. Since the 735’s battered body hadn’t been repaired properly in the 12 years since Nogueira’s accident at Porto, Bardinon delivered his new purchase to the workshop of Medardo Fantuzzi for the absolute best refurbishment possible. It was a job Fantuzzi was eminently qualified to do: In addition to his credentials as a renowned Maserati coachbuilder, he had also worked for Ferrari, creating the glorious 250 TR61 Spider Fantuzzi.

Instead of crafting a perfectly accurate reproduction of the original Pinin Farina-penned, Scaglietti-built body, however, Fantuzzi made some slight changes of his own. For example, the front of the hood doesn’t droop forward as much as it did originally and the grille opening is less oval than on other 735 Mondials. (It perhaps looks a bit more “Maserati,” which could be considered a slight aesthetic improvement.) Other changes included the addition of a hood bulge, as well as a scoop that made it look more like an 857 S—a superfluous element, as the in-line 4-cylinder engine doesn’t have air intakes on top like Ferrari’s V12s.

The protruding taillights are also a Fantuzzi touch, and the interior was modified with a new gearbox cowling covered in black felt. The gauges in the small instrument panel aren’t original either, and come, as far as anyone can tell, from a Series 2 500 Mondial; only Fantuzzi knows why they were changed. The car’s mechanicals were left untouched. 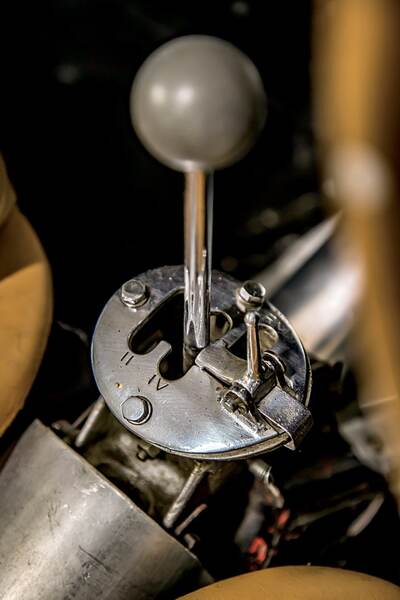 Bardinon kept s/n 0556/0446 in his substantial collection for ten years before selling it in the late 1970s to François Schaeffer. At the time, Schaeffer, a fellow member of the Club Ferrari France, owned a 365 GTC/4, and when his friends began buying racing cars and he saw how much fun they were having on track, he decided to join in. After hearing Bardinon was putting a few cars up for sale, Schaeffer went to the castle to see them, and came away with this gem.

Since the 735 had done nothing but sit in Bardinon’s personal museum for ten years since Fantuzzi had worked his magic on the body, it looked nice and tidy. On the other hand, since the Ferrari apparently had never received any serious mechanical attention, it certainly didn’t run too well. It also smoked a lot, due to worn rings, so for many years Schaeffer ran the car very gently, repairing only the things needed to keep it running. Then, at the end of the 1990s, he decided it was time for a thorough restoration, so that he’d have a car he could drive properly, rather than one he needed to nurse.

It’s unlikely Schaeffer ever expected the restoration would still be going in 2018, but it’s not an easy job to find people with the skill sets required to machine a magneto gear or the internals of a mechanical fuel pump from the early ’50s. Or a clutch that, despite being made by an Italian master, is about to be sent back for the third time for another adjustment. 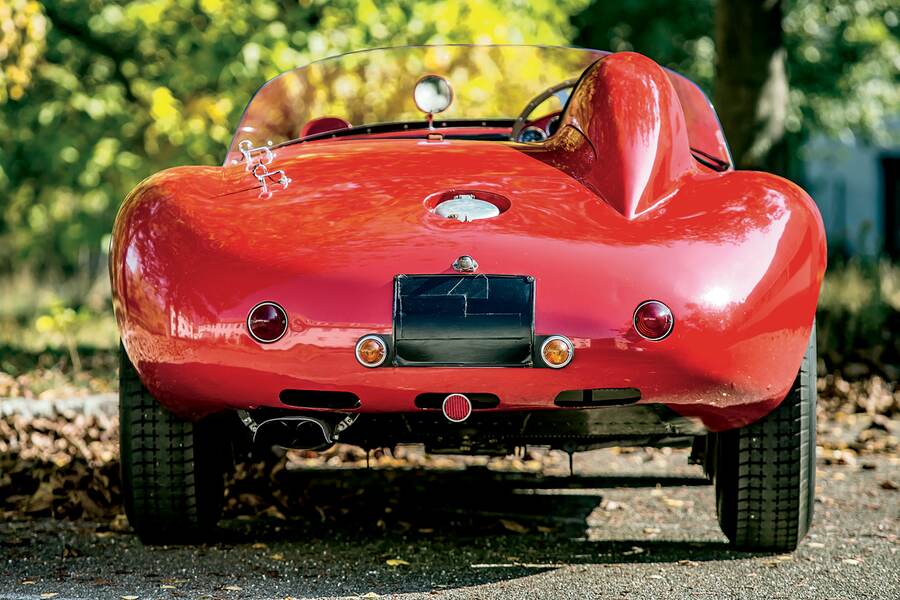 “There are no parts you can buy off the shelf like you can with a classic Porsche, for example,” Schaeffer explains. “If you need some new part, such as a camshaft, valve, oil pump, piston, or clutch, it all has to be handmade by a craftsman.”

The most difficult job of the entire build was getting the cylinder walls realigned. The engine is a bored-out 2-liter that couldn’t possibly have made any larger than the current 2,940cc—the gap between the first and second cylinders, as well as the third and fourth, is a mere 5 mm. For this task, Schaeffer took the car to Autofficina Sauro in Bologna, which has been working on Ferraris since the 1960s. Although, with only three examples ever made, no one can really be considered an expert under the hood of a 735.

Setting the valve seats and guides correctly on such a rare engine were also very delicate jobs. The original crankshaft was in good enough condition to be kept, as were the connecting rods, but as a matter of course all the bearings and seals were replaced. 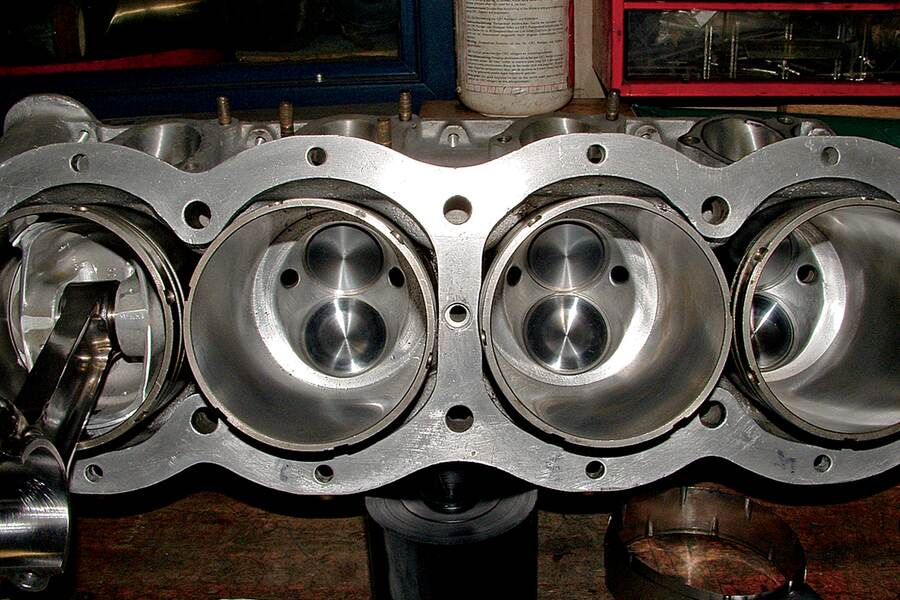 Boring out the 2-liter block left only 5mm of space between some cylinders.

All of these jobs, as well as the timetables of various in-demand master craftsmen, led to long periods of waiting. Luckily, Schaeffer’s career keeps him busy, and, not surprisingly, he has other classic cars to drive.

Looking ahead to how he plans to use s/n 0556/0446, Schaeffer has made a few changes of his own. Since events such as the Mille Miglia require cars be fully road legal, he’s added a set of turn signals to the front grille, along with a another pair in back mounted on each side of the license plate. And since he plans to have a co-driver, the original full-width windshield needed to be remade, although the rivets where a later half-width screen once sat are still visible in an arc on top of the dashboard.

Elsewhere, the gearbox cowling in the cockpit was both too big and too rough, so a replacement accurate to the original is about to be installed, and Schaeffer elected to rid the cabin of the Fantuzzi felt, returning everything to its original painted metal. Hubert Haberbuch, the HH of HH Carrosserie, has also made a perfect replica of the original smooth hood, with authentic little leather straps to hold it down. 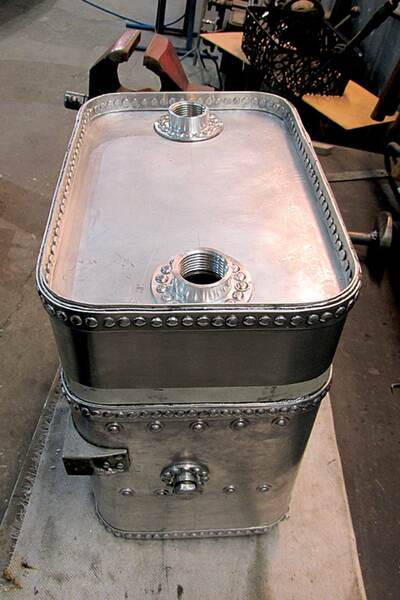 Otherwise, the Fantuzzi body remains untouched, down to the rivet mysteriously set into each front fender. It seems Bardinon had a slight eccentricity and drilled holes in each and every car he owned to mount the badge of his personal coat of arms. “That’s how you know it’s a Bardinon car,” says Schaeffer with a shrug.

As for the revised Fantuzzi front end, Schaeffer has a theory. “The front of the Mondial is very difficult to remake,” he says, “and if you had an accident I think the only thing you could do was to take it back to Scaglietti. Many Mondials and Monzas had their fronts repaired in ways that are different from the originals, so maybe Fantuzzi made a new ‘face’ because it was easier than making an exact copy of the original.”

Schaeffer has now owned s/n 0556/0446 for more than half of his life, yet has never driven it hard—nor at all since the beginning of the millennium. As he sees it, he wants it to be perfect, and that’s something worth waiting for. The day he can truly experience the Ferrari as it was meant to be is now tantalizingly close. If the adjusted clutch works as it should and he’s able to get it on the road soon, he intends to enter it in the 2019 Mille Miglia. It’s an appropriate first outing for a glorious machine, one that you saw here first! 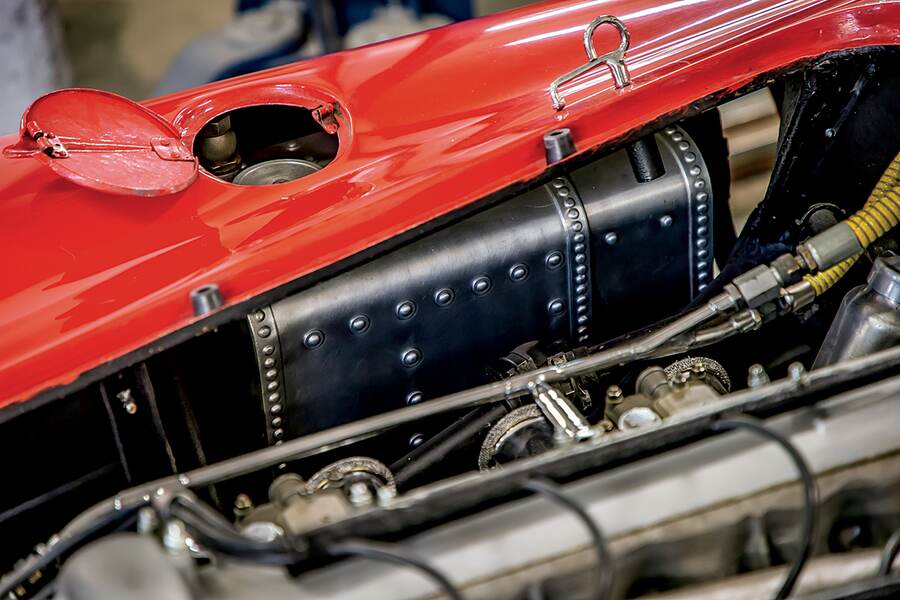 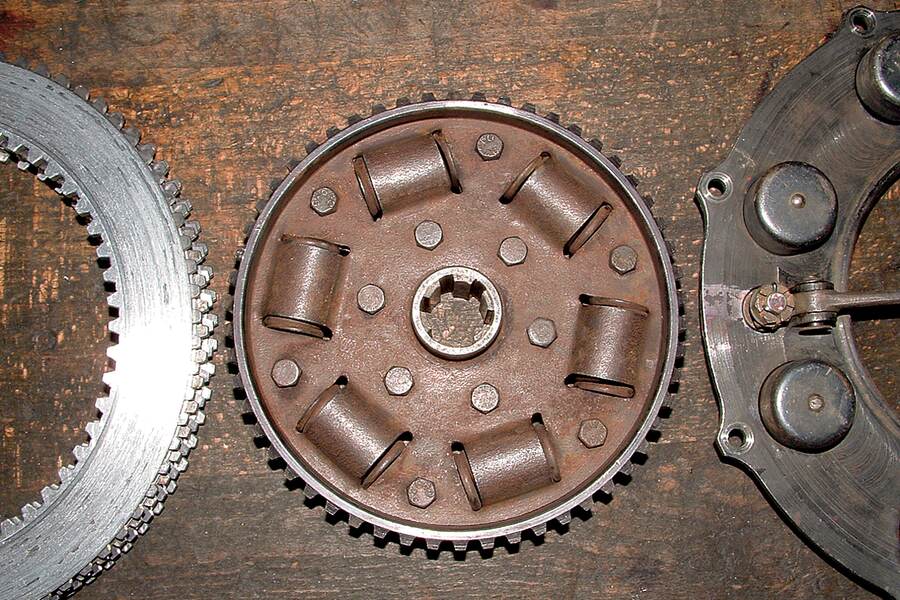 Handmade clutch has returned to Italy three times for adjustment. 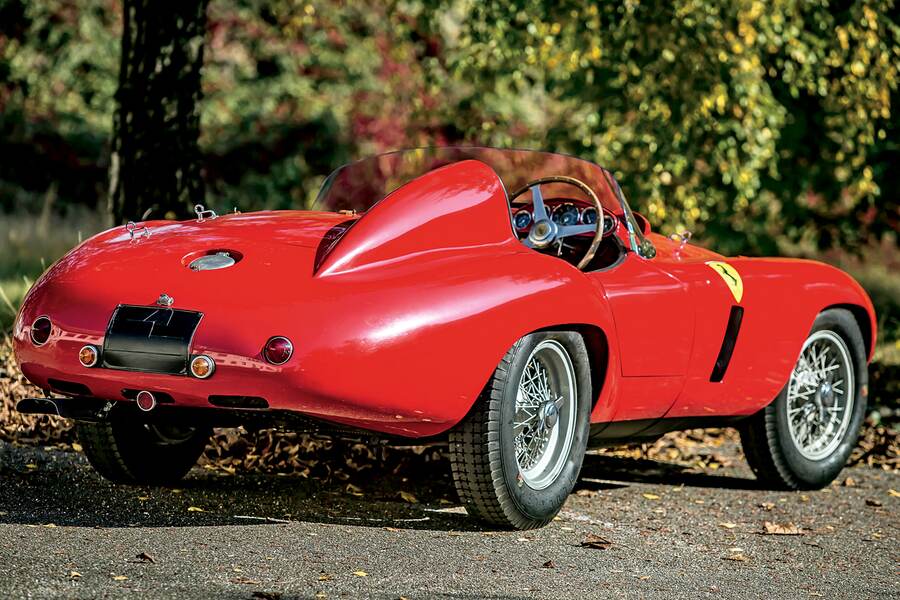 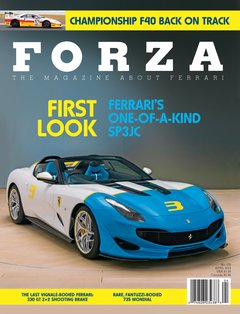