Many enthusiasts dream of building their own car. Nick Soprano actually did it. 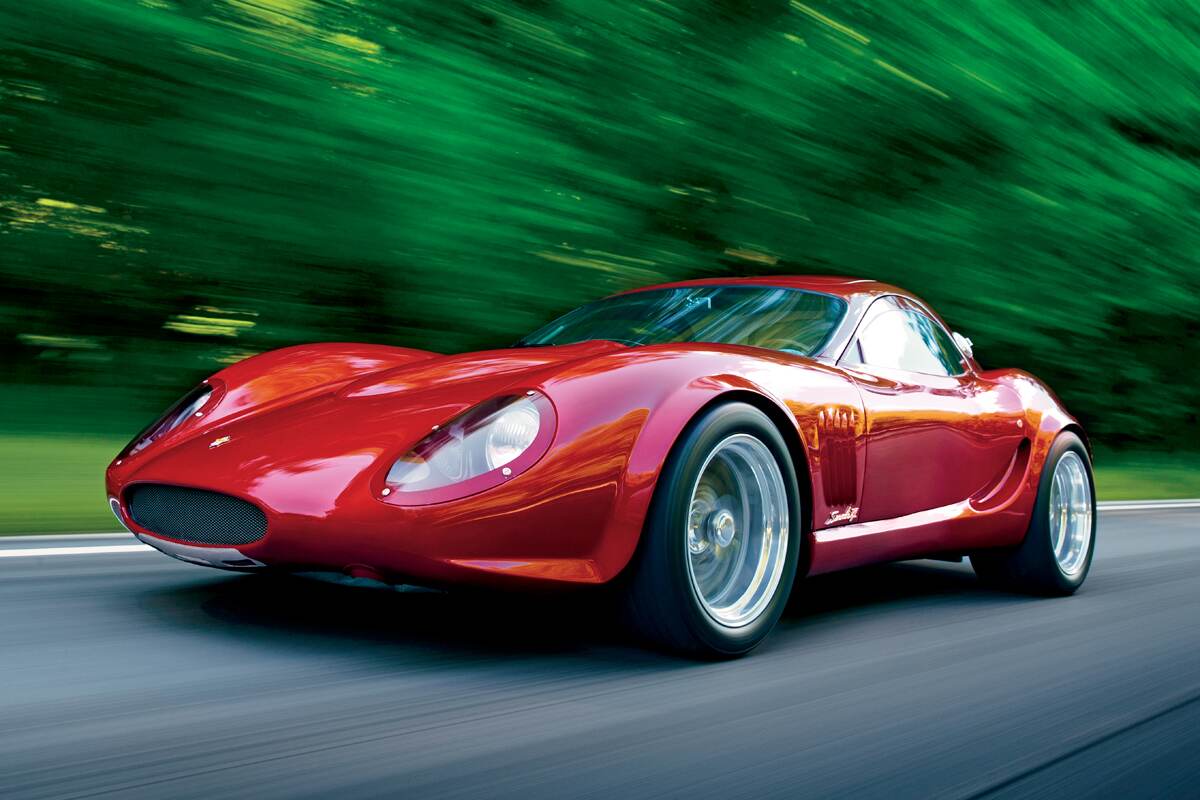 When asked the eternal question “When did you become a car guy?” Nick Soprano has no answer. “I can’t think of a time I wasn’t a car guy,” he says. “I was born with the gene.”

Growing up on a farm, Soprano was attracted to the form, shape, and construction of machines—and, soon, how they drove. He was driving tractors at the age of 7, and, by 13, cars—a family friend gave him a Fiat 1100. Later in his teen years, the Fiat morphed into a Model A Ford, and then an Alfa Romeo 2000 Spider.

In high school, Soprano spent a lot of time filling notebooks with drawings of cars. A lot of car guys did, and do, but unlike most of us, his dream drawings would eventually fly off the page to become full-fledged reality. 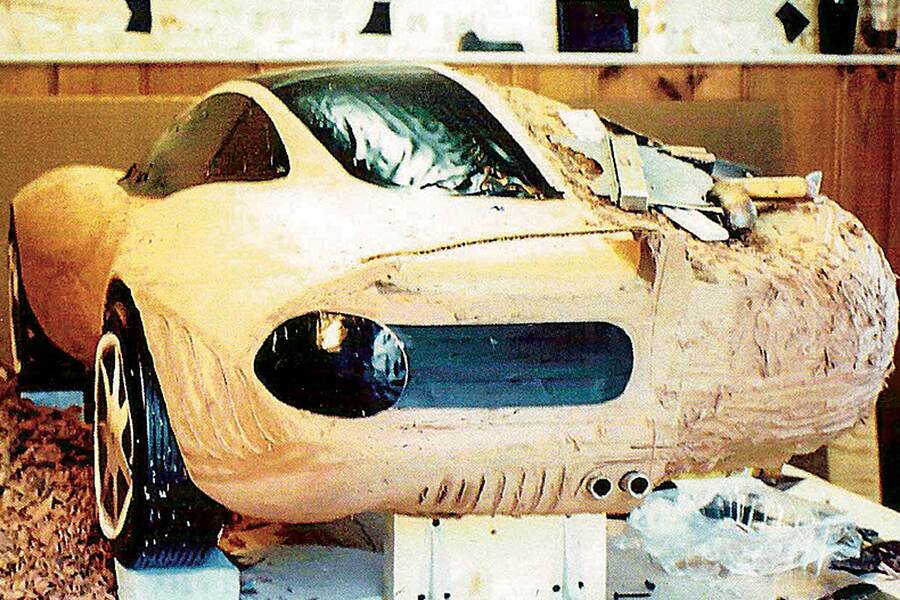 The young Soprano’s artistic inspiration came from Italian cars of the 1950s and ’60s. They were well proportioned and well balanced. Their curves reflected light so beautifully he couldn’t take his eyes off them when he saw one on the road. The economy of line and how their bodywork draped the chassis was beyond compare. These organic, wind-cheating shapes revealed the human element behind their design, and Soprano kept refining lines in his mind, chasing his dream car.

He soon found another source of inspiration: early Corvettes. These slices of Americana offered a lot of bang for not a lot of bucks. They weren’t as refined as their European counterparts, but they opened his eyes to the mechanical side of the equation: He learned how things worked, then moved on to making improvements and making the cars faster.

Soprano started his business, Motor Classic and Competition in Bedford Hills, New York, almost as a hobby. He would buy an old Alfa, Lotus, or Austin-Healey that needed some TLC and bring it to the next level. Then, after experiencing the machine for a while, he’d sell it and move on to the next one. This sampling of a wide variety of automobiles further refined his ideal of the perfect sports car. 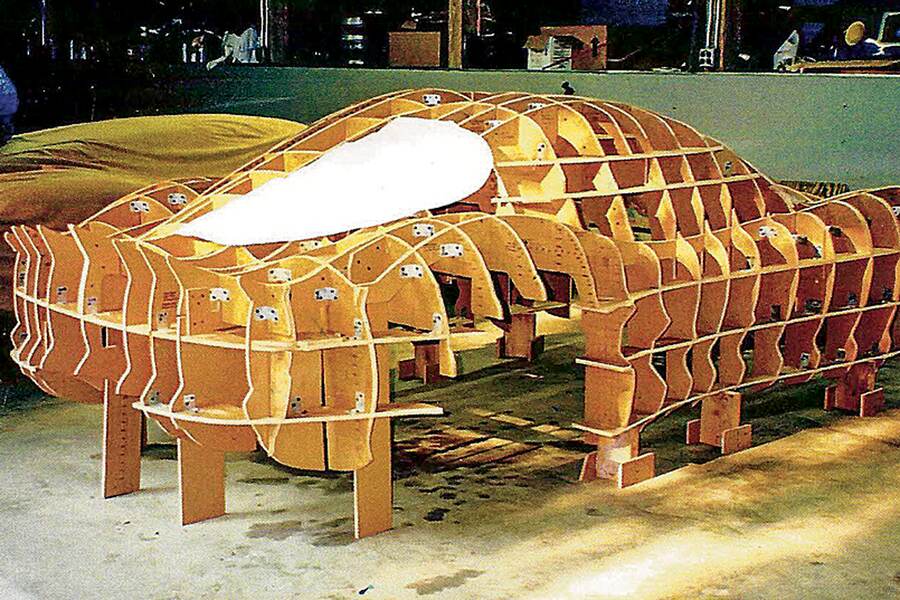 Eventually, Soprano started climbing the ladder of automotive marques. Corvette begat Lotus, begat Maserati, begat Ferrari. His first Prancing Horse was a nine-year-old 330 GTC, and it further opened his eyes to what the Italians were thinking compared to the British and the Germans. Specifically, he saw how the Italians were expressing a great deal more emotion in their creations—which, to his mind, made their cars more exciting.

That’s not to say the rest of the automotive world had nothing to offer. A little later Soprano was able to experience a Cobra Daytona coupe: a clean, organic, evolutionary design by Peter Brock paired with a brutal, visceral Ford powerplant. As before, the American car was primitive compared to the Italian cars of the day, but it was a potent weapon, effective in its very simplicity. Plus, it had been created by hands-on knowledge, not by committee, another lesson Soprano would never forget.

As time went on, Soprano was able to go vintage racing with a customer’s 250 GT Tour de France and 250 GT SWB Comp./61. With extensive seat time in these legendary machines, he discovered how they were able to accomplish so much on the world’s racing stage. 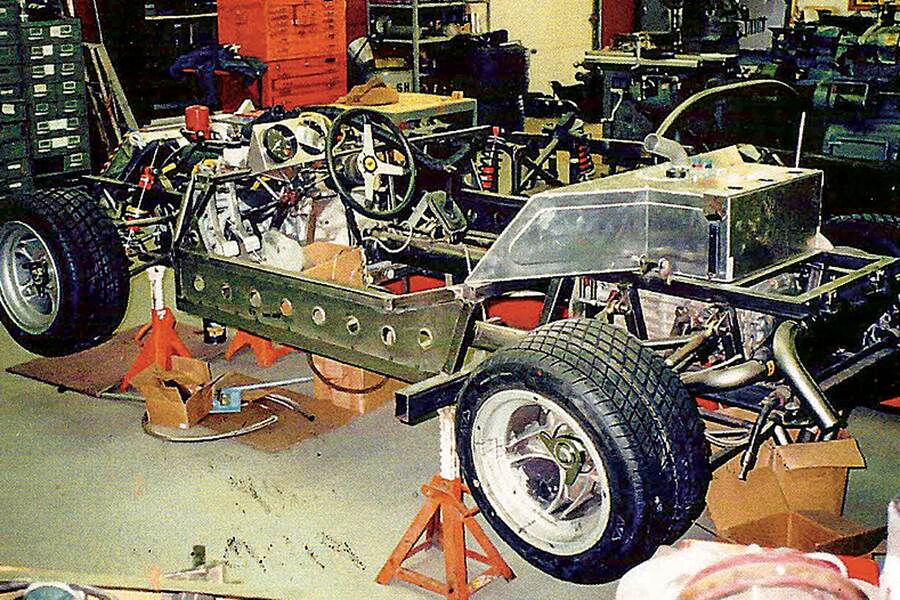 Likewise with another icon: a Maserati 450S. It was the fastest sports racer of its time, and another relatively simple but brilliant design. Soprano refined the suspension and carburetion, and, when it was dialed in, realized what a truly dominant car Maserati had created. This too was stored away for later use.

AFTER A FEW DECADES of experiencing, learning, and refining, Soprano reached a tipping point: He started to think in earnest about creating his own car. A self-described “conceptual design engineer,” Soprano learned by taking other peoples’ cars apart, rebuilding them, and racing them, and he knew he could build a machine of his own design. The challenge was to prove to himself that it would work the way he intended and, just as important, that it would actually fit the template of his dreams.

The dream started taking shape in the late 1980s. The first pieces of the puzzle were four suspension uprights, brakes, and a 4.4-liter 12-cylinder engine from a Ferrari 365 GT 2+2. The first two items were sturdy and worked well on a heavy car, so could be trusted to deliver, while the latter was, well, a necessity. Soprano admires the engineering, design, and castings of the world-beating Colombo V12, which he describes as engine building elevated to an art form. 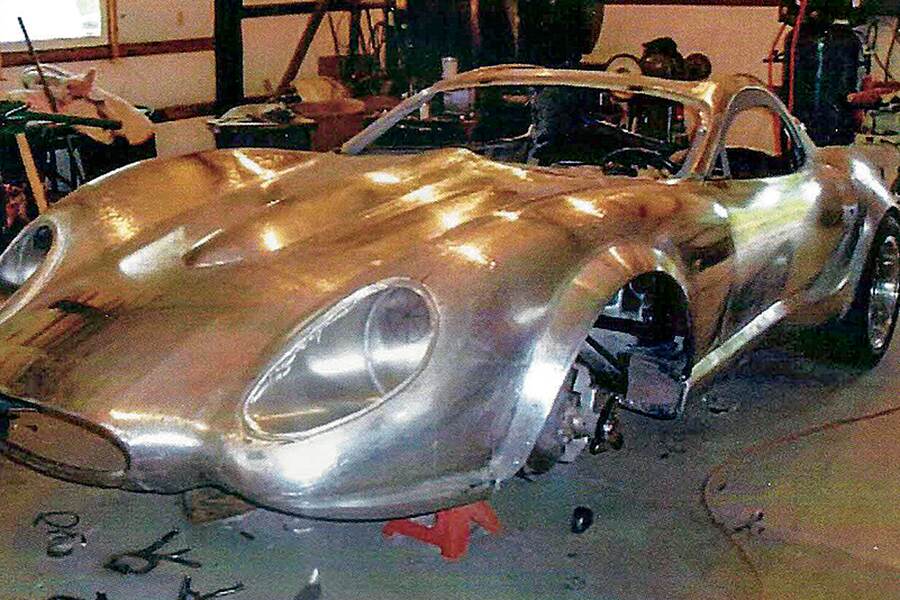 Further following the tried-and-true formula of the Ferraris and Maseratis he loved, Soprano next designed his own chrome-moly chassis (with a classic Maranello 2,400mm wheelbase), which was built to his specifications. He knew where the engine was going to sit and where the 5-speed ZF transaxle would be located, so the body was shaped around this.

Soprano had a visual image in his mind, a tribute to all those racing and GT cars of the 1950s and ’60s, along with some rough sketches. He took his vision and drawings to an artist/illustrator, who was able to refine these on paper.

With proper drawings in hand, it was time to build—the old-fashioned way. Soprano commissioned a 3/8-scale wooden chassis, then connected with a sculptor to lay down clay and create a 3D model. Even with measurements and detailed drawings, however, the sculptor began applying his own artistic license to Soprano’s vision; sensing this, Soprano knew he had to be there every step of the way. From then on, the sculptor (fortunately a very patient man) would play the role of Soprano’s hands in the shaping of the clay model. 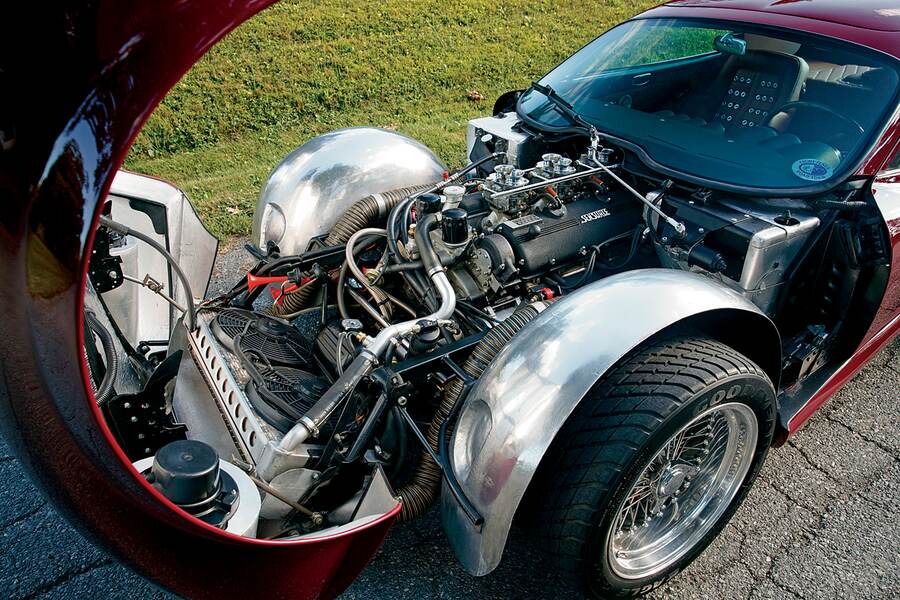 Fortunately, they developed an increasingly intuitive way to work together. The project soon grew into three men in a small room working on weekends. Few words were exchanged; instead, the language of gesture served to indicate where clay had to be added and removed.

One day, as he watched the clay begin to take shape, a word popped into Soprano’s mind: Sensuale, Italian for sensual. He knew instantly it was the perfect name for his creation.

The model gradually grew to become a more and more precise representation of the image in Soprano’s head. At the end of the ordeal, the sculptor told him he’d never worked with anyone who could hold such a clear picture in his mind. 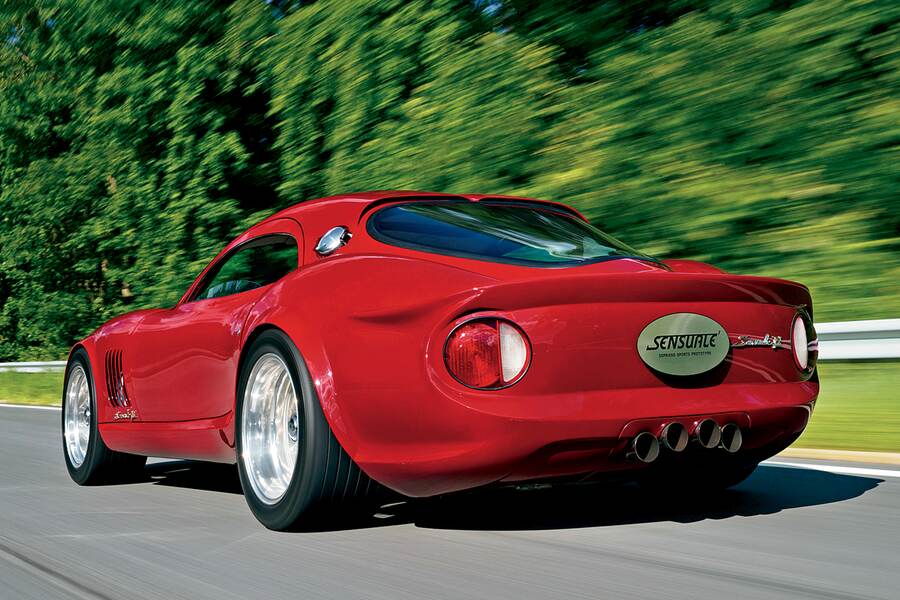 From there, a full-scale wood buck was built, over which aluminum sheet would be formed to make the body. Another artisan then appeared, a body man who’d heard of the project, and who enthusiastically insisted he was the man for the job. Soprano was initially cautious, not knowing him or his abilities, but a little research revealed an impressive track record, including having created a complete body from photos for a 1950s Ferrari that had been in a fire.

Soprano realized he was the real deal and invited him to join the team. But there was one negative: The body man lived in the Midwest and, as with the clay model, Soprano needed to be hands-on. As a result, he flew out multiple times to oversee the aluminum construction.

Making the task more challenging was the small fact that nearly every non-mechanical part on the car is bespoke. Soprano didn’t want to compromise the lines of his creation, which meant that everything from the headlights and taillights to the glass was built specifically for this car. There was to be no raiding of parts bins for this build. 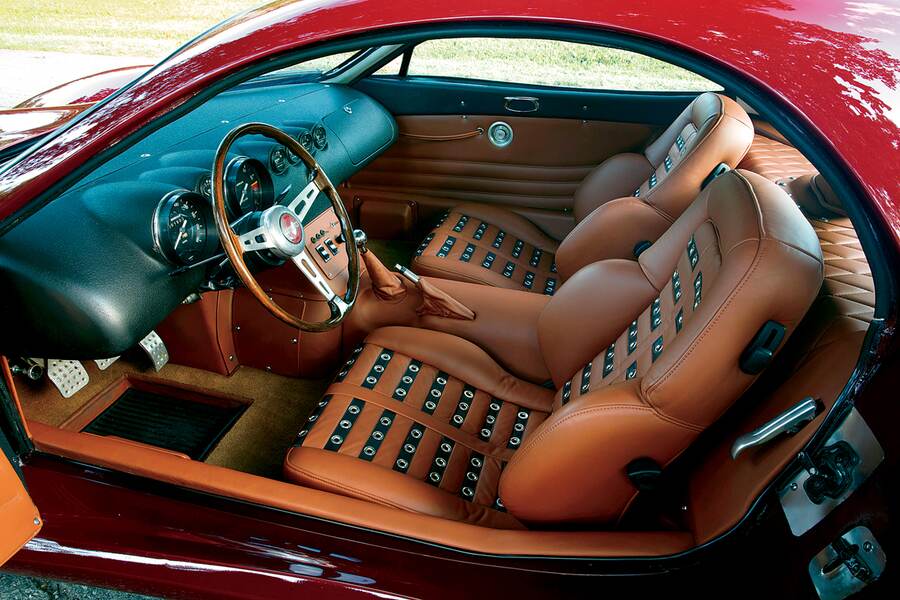 Creating a one-off car from one-off components raises additional challenges. The V12 engine sits so far back in the chassis—both to lower the hoodline and give near-perfect 49/51 weight distribution of its 2,990 pounds—that the distributors and the rearmost carburetor were under the dash. Not wanting to have to remove the V12 for maintenance, Soprano instead devised a flip-up windshield and a removable dash section for access.

Walt Disney called such novel thinking “imagineering,” and it’s one of Soprano’s favorite terms. More imagineering was called for with the door glass, which initially refused to lower due to the door’s varying concavity. Eventually, Soprano and an engineer managed to rebuild and reconfigure the power-lift mechanism to work in the available space.

When the body was done, the car basking in its naked aluminum glory, there was one more decision to make: What color was it going to be painted? Soprano envisioned the dark red of the prewar Alfa Romeo Grand Prix cars as the starting point for a unique (of course) color, and soon another artisan was drawn to the project. It took more than 100 spray outs, but the hue was refined and refined again until it matched Soprano’s vision. 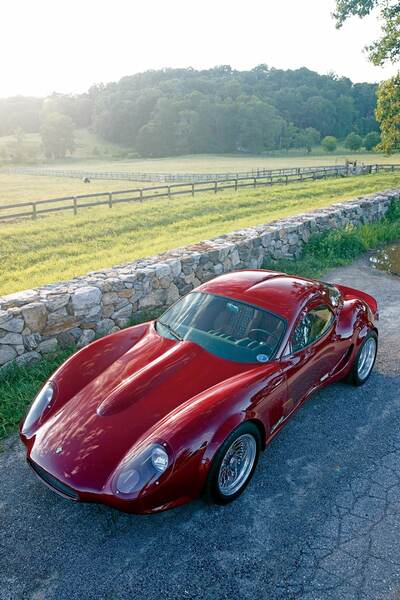 Finally, it was time to wrap up the interior. Soprano hired two specialists: the first created the panels, carpets, and headliner, the second built the seats. As with the rest of the car, everything was done to Soprano’s specifications, down to the ventilation rings in the seats, a common feature on some of those inspirational ’60s sports, racing, and GT cars. Those machines never had power rack-and-pinion steering, power brakes, or effective air-conditioning, however.

TODAY, Soprano looks back on what he describes as a wonderful experience, with the many craftsmen bringing their own passion and enthusiasm, taking his raw design concept and turning it into polished reality. From beginning to end, his dream machine was built like a coachbuilt car of the past, using blood, sweat, heart, and soul rather than computers and committees. All told, the creation of the Sensuale took 25 years, and he’s amazed at what was accomplished.

Soprano likens his first drive to a father holding his newborn child for the first time. In this case, though, he had been imagining what the experience would be like for decades, and wondered if the car would live up to his expectations. 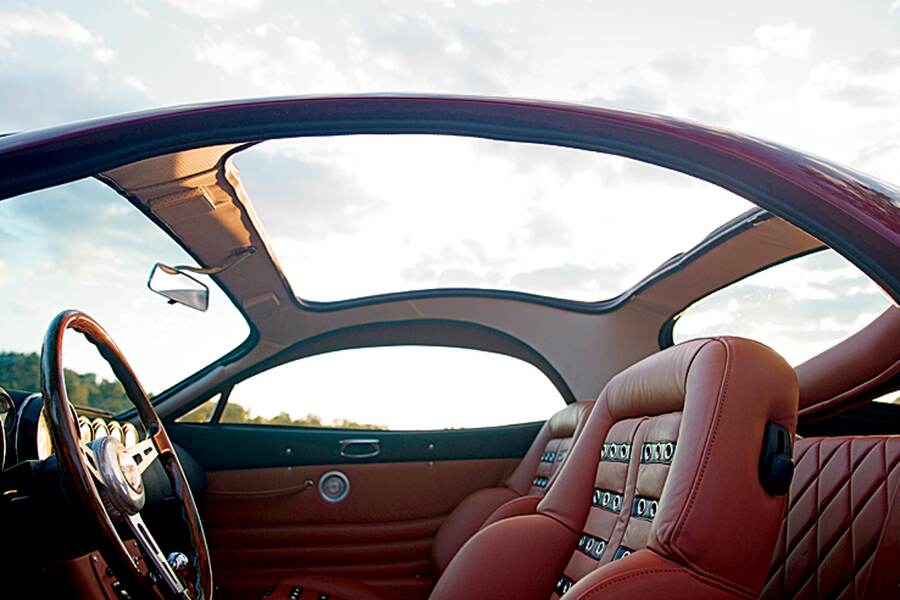 It did, and Soprano was overjoyed; he’d made his dream come true. At the same time, he knew it would never truly be finished. It was a prototype, and there were things he wanted to refine, a process that is ongoing. Soprano feels the car is about 98 percent there, but he will keep working and making no compromises in his own search for perfection.

“It absolutely has the flavor of a vintage racing Ferrari that I was trying to incorporate,” he says. “What’s really interesting about it is that, if you build a car with a general theme in mind, and you honor that theme throughout the build process, the end result, in this case, is greater than the sum of its parts.

“I had the privilege of running for six years a SEFAC hot rod, and I’ve definitely replicated the essential flavor and feel of that car. The SWB was such an intense driving experience; it had balance, sound, feel, and a character you could bond and communicate with… It’s something that’s hard to put into words. 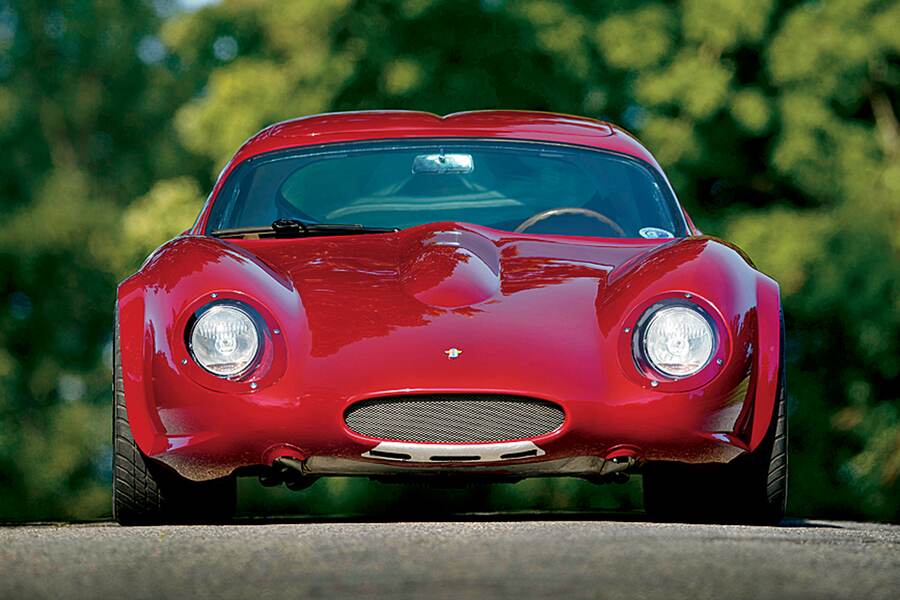 “Sensuale takes that inspiration and goes to another level of performance,” concludes Soprano. “The drama, excitement, and soul of the original are captured in a truly visceral driving experience.” 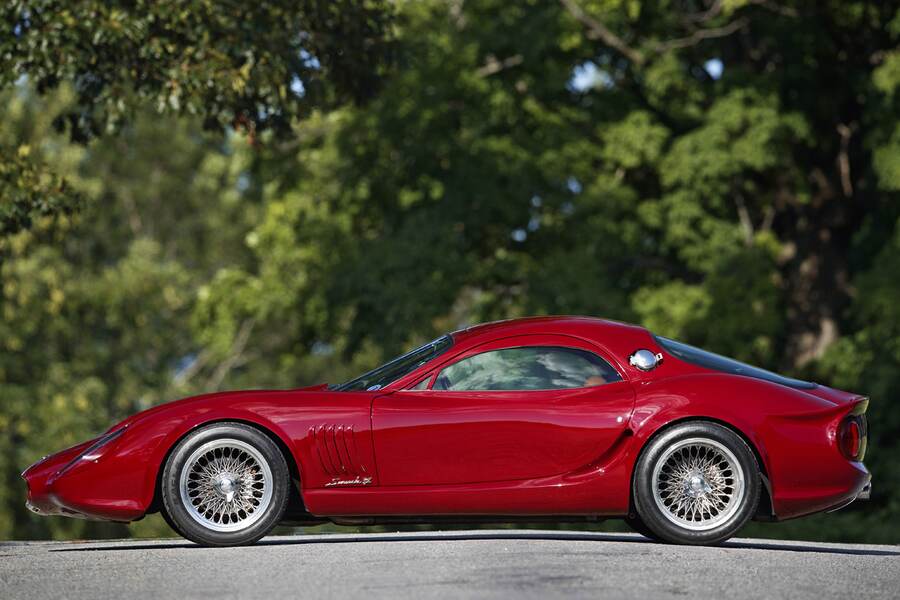 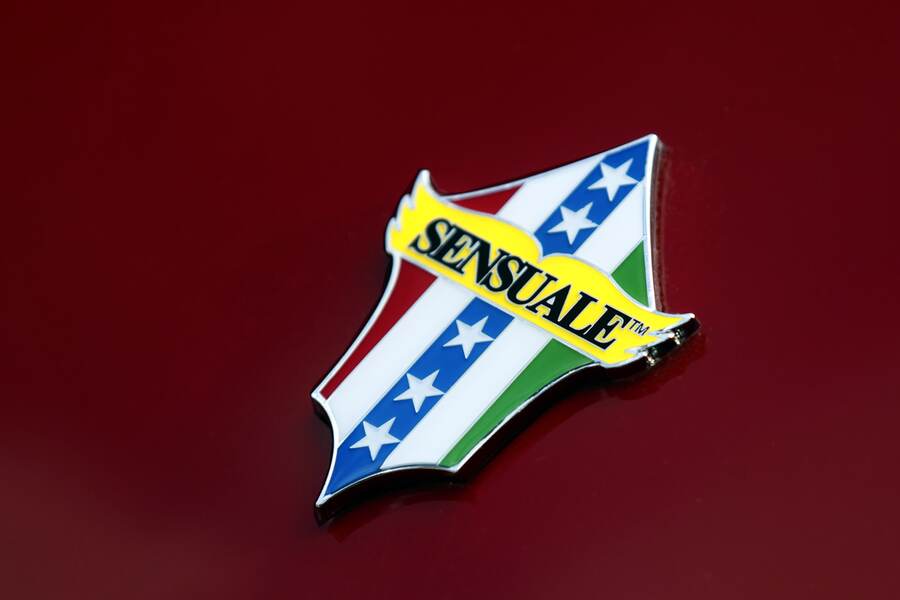 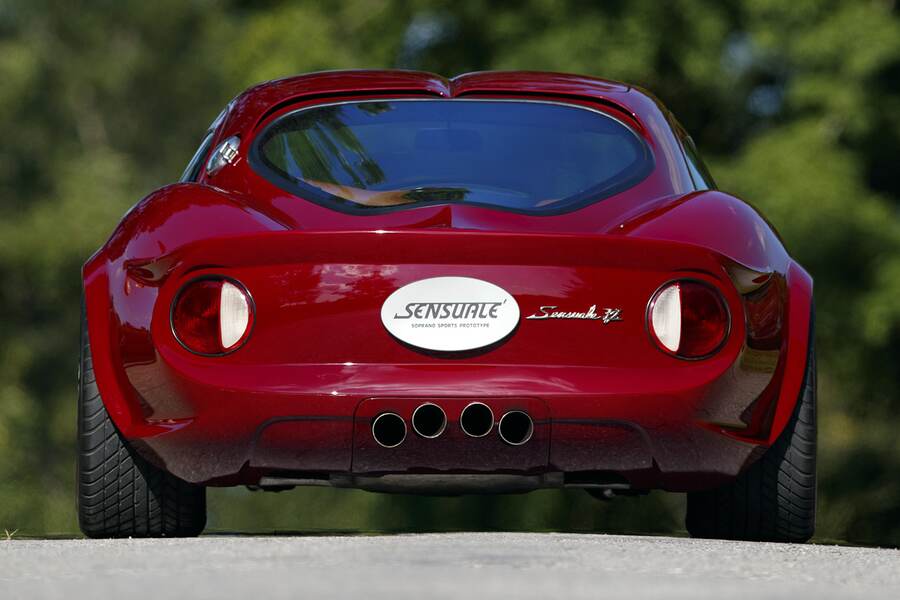 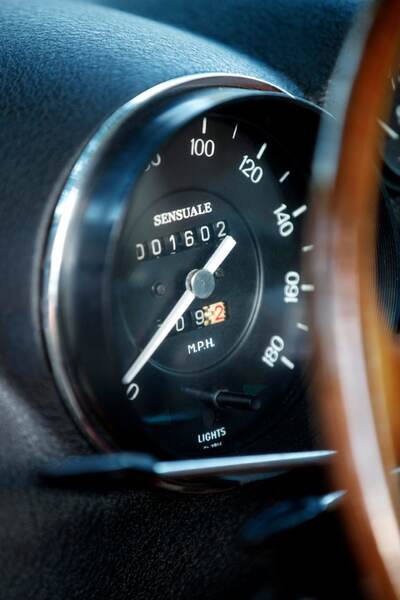 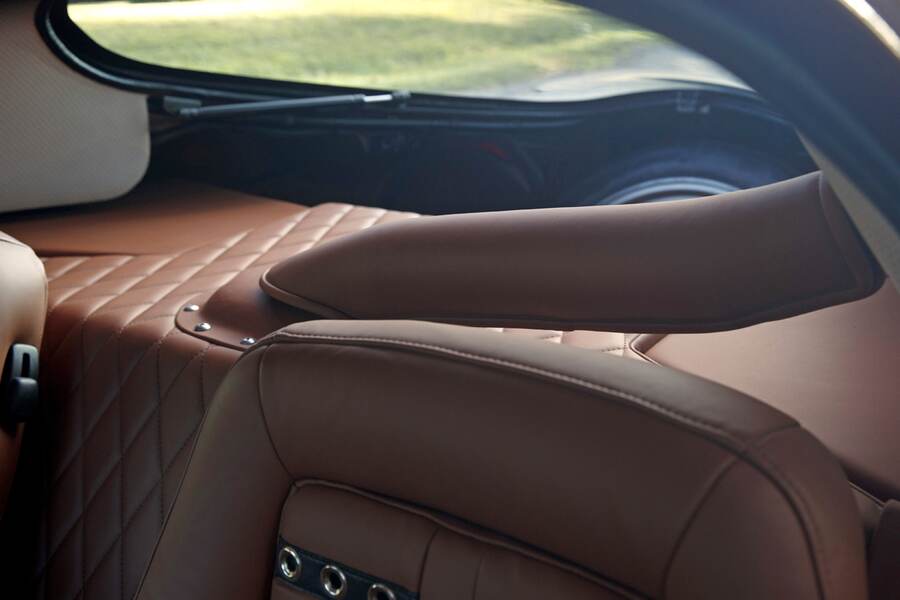 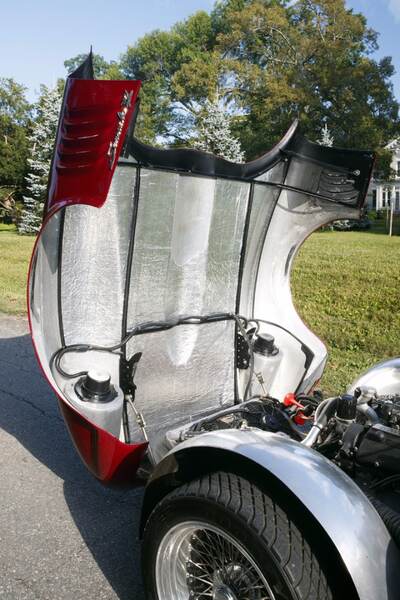 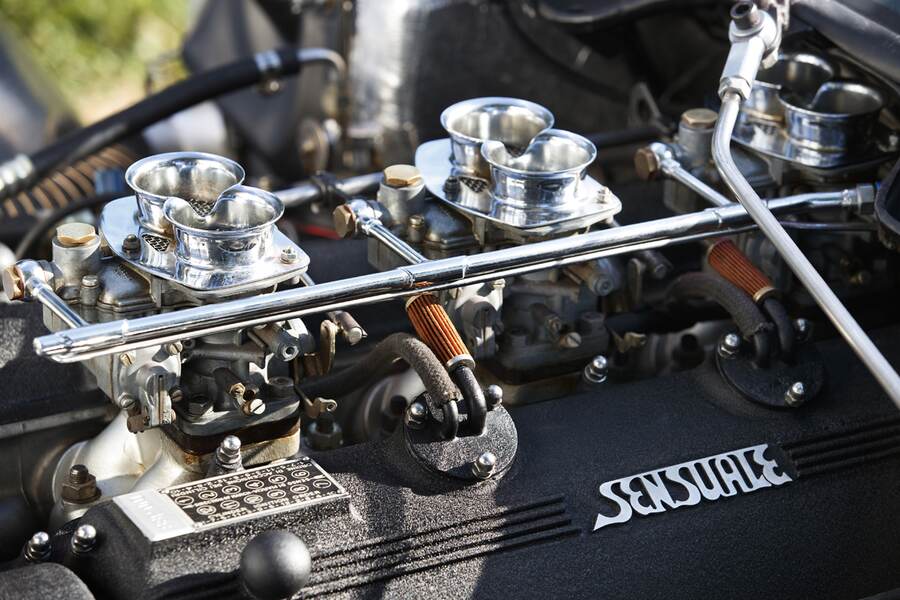 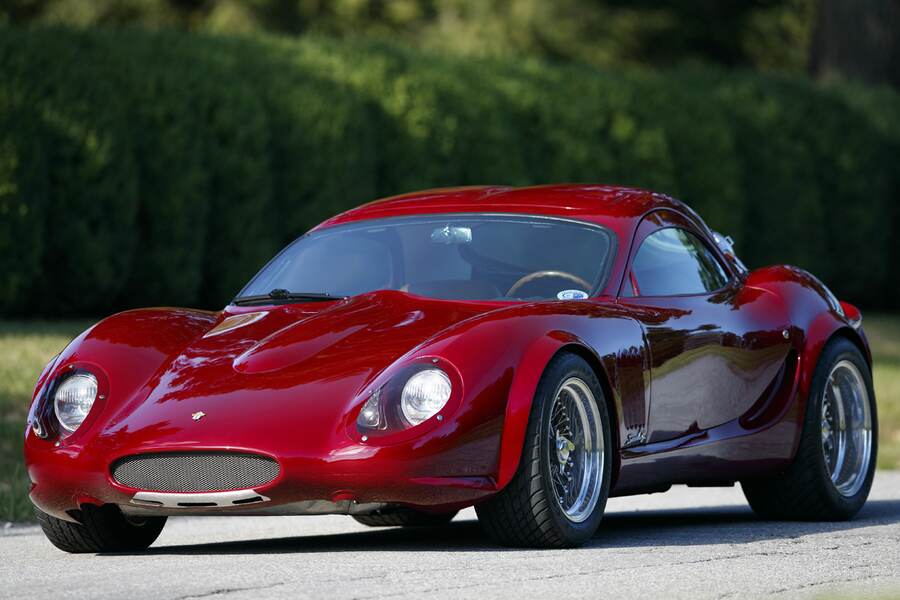 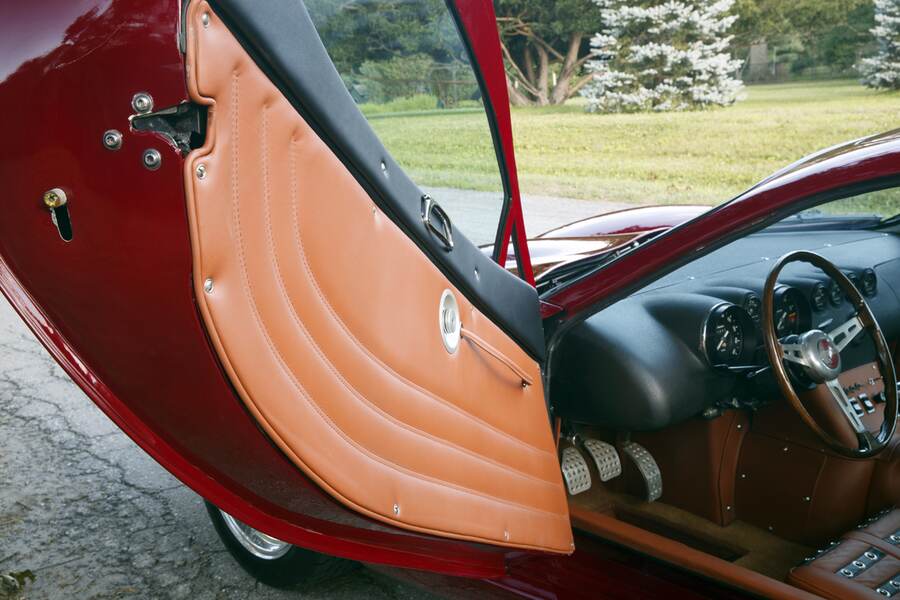 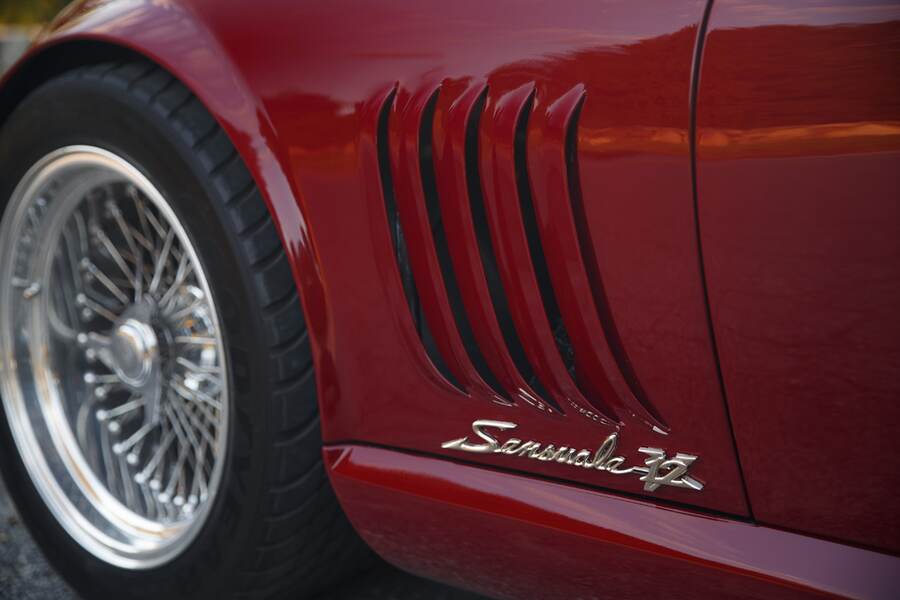 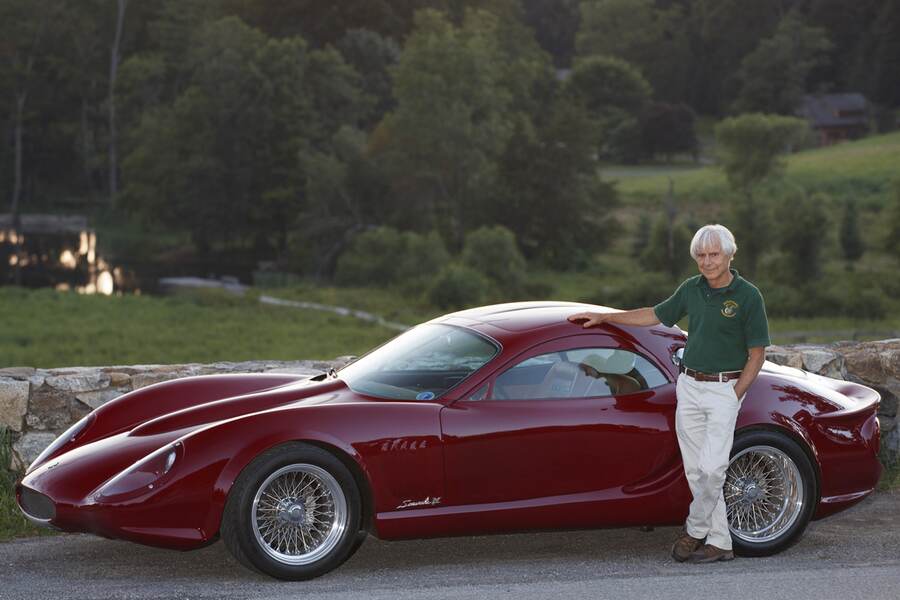 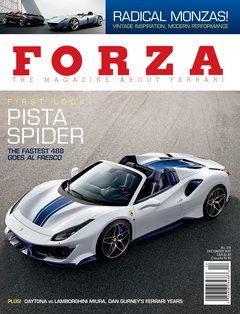