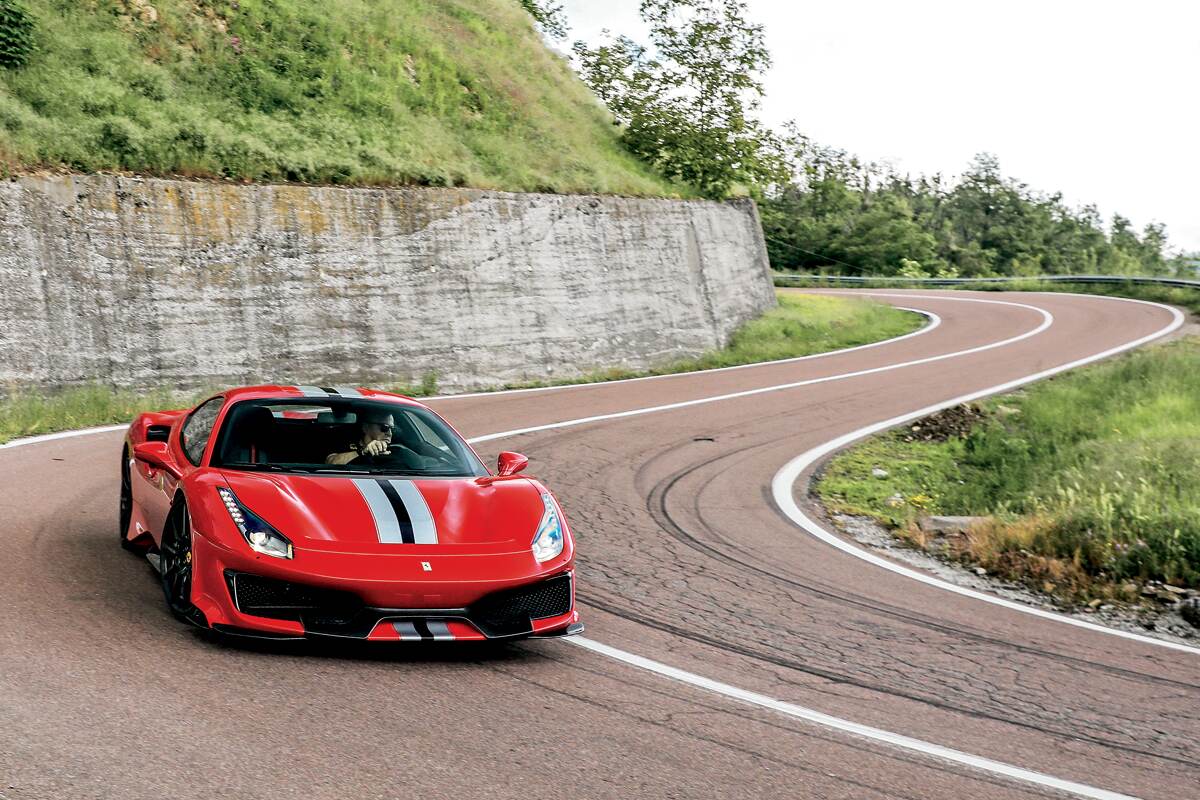 It’s difficult to find much to dislike about the 488 GTB. Successor to the game-changing 458 Italia, the incredibly talented 488 offers a breadth of abilities we couldn’t have imagined in a Ferrari V8 even 10 years ago. But just suppose you were drawing up a list of improvements to make the GTB a bit more driver focused, and you’re not afraid to give up a bit of comfort and usability.

You might well ask for less weight, a more connected chassis with even better body control, and brakes more suited to the track. And definitely more noise, because the one area you could fault Ferrari’s current turbocharged cars is in sound quantity.

Here, then, is the car Ferrari says answers all those requests: the 488 Pista. The name seems more than apt, as “pista” means “track” in Italian and this is the track-focused, Special Series version of the 488, as well as a spiritual successor to the incredible 458 Speciale (and 430 Scuderia and Challenge Stradale before that). However, while this car is more at home on a track than the GTB, and more Pista owners (some 60 percent) will track their car more often than GTB owners, Ferrari explains the moniker actually refers to the amount of inspiration and technology this car takes from its competition cousins. 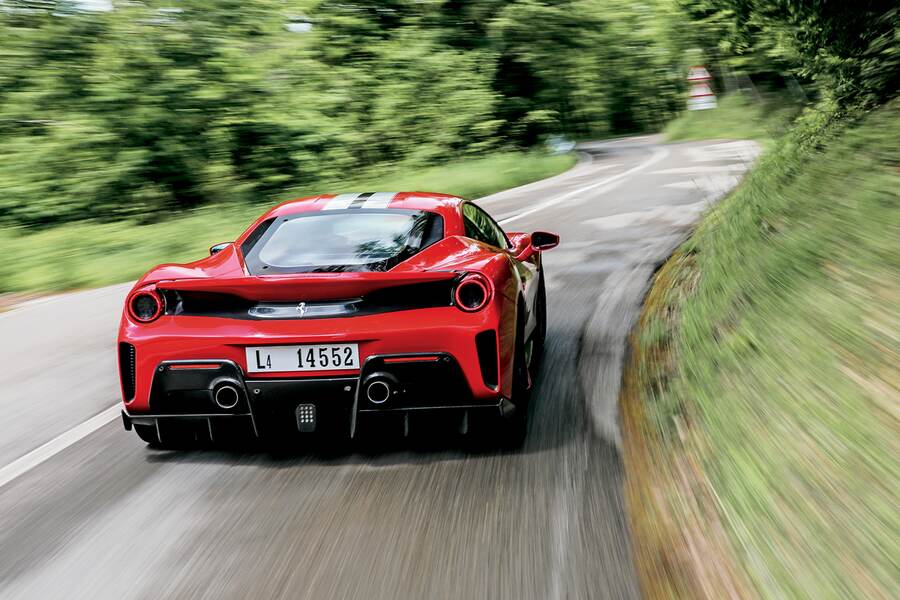 As a result, the Pista produces some big numbers, starting with 720 horsepower and ending, for the lucky few, with the price tag. There’s the small matter of $44,000 above the $301,000 base price of a 488 GTB, for example, then there’s the obligatory stripes, which add around $10,000. Then, if you’re feeling both flush and brave, another $15,000 for a set of Ferrari’s first carbon-fiber wheels. This might be a “baby” Ferrari, but there’s nothing small about the figures.

Except this one: 1 minute, 21.5 seconds. That’s how long it takes chief development driver Raffaele de Simone to punt a Pista around Ferrari’s Fiorano test track. That means nothing without a little context, but if you know the old 430 Scuderia required 1:25, the Speciale needed 1:23.5, and the best the 488 GTB can do is 1:23, you can see there’s more to the newest Ferrari than those pricey stripes. And if the Pista’s still 2.8 seconds adrift of the mighty LaFerrari hypercar, well, we won’t hold that against it.

We’ll get to experience that track speed later during our day in Maranello, but first we head out to experience the car in what Ferrari claims is still its natural habitat: the road. Thus we’ll tread a familiar route, past the red door of Enzo’s old house located within the Fiorano complex, out of the heavily guarded entrance, and south towards Florence. 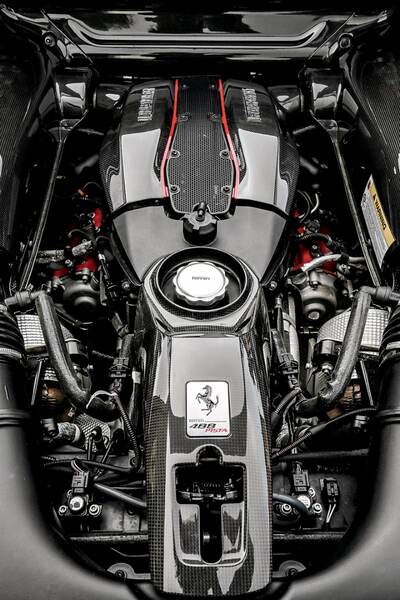 FIRST, though, we need to store our bags, whereupon we realize something that should have been obvious from the outside. That sexy hole in the hood—part of a Formula 1-derived aerodynamic device called an S-duct, which hoovers air up from the front of the car, pulls it through the gap, and spits it out, where it is sucked close to the curvature of the hood—might do wonders for downforce, but it’s not great for the weekly shopping. Luggage space drops from a generous 8.1 cubic feet to a more modest 6, though that’s still plenty for a helmet and a pair of driving shoes, or a big weekend bag.

There’s also a useful shelf behind the seats and a tray in the center console where a handbrake would have been in days gone by, but there’s not much else in terms of storage. In fact, there’s not much else in terms of anything. There are no carpets and little soundproofing, just simple, manually adjustable bucket seats, tasteful carbon-fiber door casings, and, on the driver’s side, a lightweight cloth loop to pull the door closed. (Strangely, the passenger gets a normal, chunky handle.)

A prod of the big red Start button on the carbon fiber-and-leather steering wheel reveals something there is definitely more of: noise. In answer to criticisms that its turbo engines don’t sound as good as their naturally aspirated predecessors, Ferrari has worked hard on the acoustics and says the Pista is up to 8 dB louder inside than the GTB. 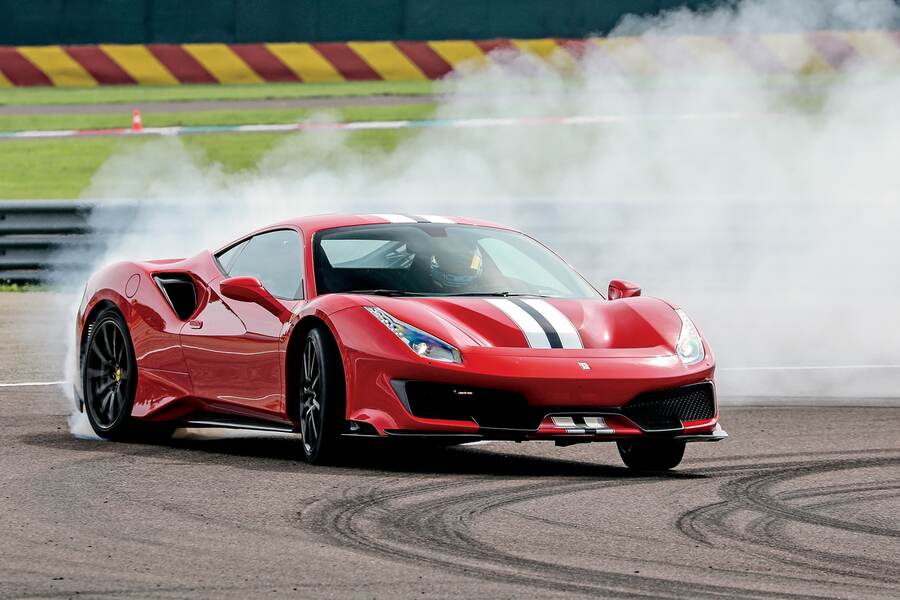 From the moment we roll out of Fiorano’s gates, however, it’s clear the Pista is far less intimidating, and far more civilized, than it looks. And, fundamentally, it’s as easy to drive as Ferrari’s least-demanding car, the Portofino, thanks to the now ubiquitous seven-speed dual-clutch gearbox Maranello first introduced on the California back in 2008.

Even so, the differences between the Pista and the “ordinary” 488 are clear. The ride comfort, while quite good, is noticeably less supple (although significantly more plush than the 458 Speciale), and the steering feels tighter, more responsive, and a shade weightier. While the suspension has been suitably recalibrated, including the addition of stiffer springs, we suspect much of the change in feel is due to the latest version of Michelin’s Pilot Sport Cup 2 tire and its stiffer sidewall.

It’s a 45-minute drive from Maranello to the good roads in the hills south of Pavullo Nel Frignano. Unlike some supercars the 488 has excellent forward visibility, and it’s great fun watching the peaks of the Pista’s pronounced fenders frame the oncoming cars. 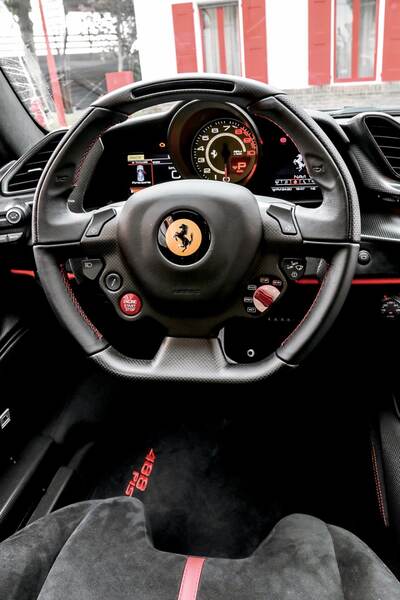 As the traffic thins, we toggle our way from the steering wheel-mounted manettino’s entry-level Wet setting, with its ultra-cautious stability system and soft throttle map that makes the Pista more relaxing to drive in congestion, to the noticeably livelier Sport mode Ferrari recommends for normal road use. And when we finally shake off the dawdlers, see an open stretch of road ahead, squeeze the wheel ever so slightly more firmly in anticipation, and then sink the right pedal toward the bare-metal floor, it’s already clear this is a very serious machine.

Most enthusiasts have driven some kind of turbocharged car at some point, and are thus familiar with the momentary delay between right foot requesting a dollop of extra power and small of the back receiving it. But in the Pista, it’s almost, almost impossible to detect. Plus, when the kick does come, it comes on so hard the only “lag” you’ll be worrying about is your brain keeping up with the scenery being delivered at warp speed through the windshield.

The Pista’s engine is fundamentally the same 3.9-liter V8 used in the 488 GTB—except that more than 50 percent of the individual components are different because the Pista borrows heavily from the 488 Challenge racer. This means there are, among other things, shorter induction plenums, new cams and exhaust manifolds, and a lightweight flywheel and titanium connecting rods, all of which help save 39.7 pounds and add a solid 50 hp to the GTB’s 670, for a whopping 720 horsepower. 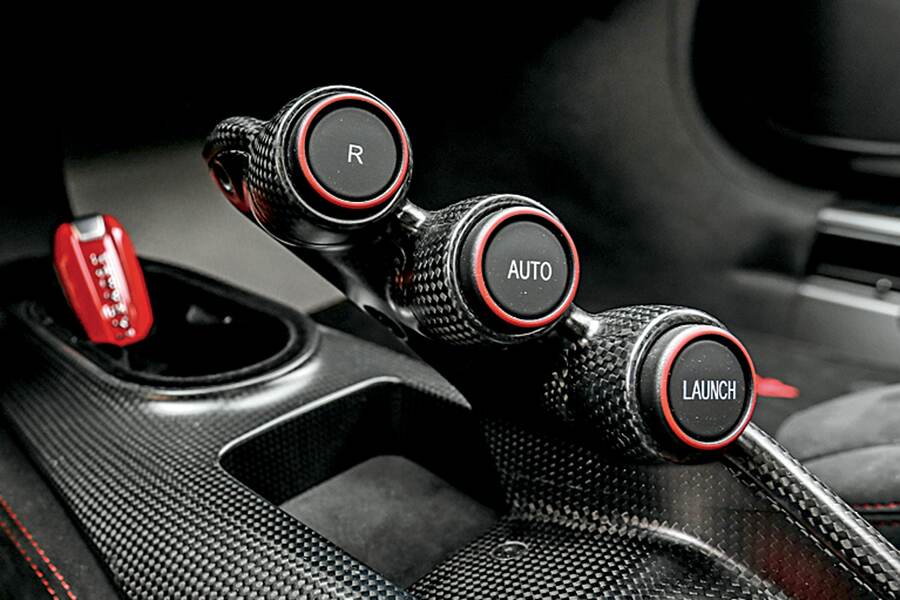 That alone would be enough to drag the Pista clear of its GTB brother in a straight fight, but on top of the weight saved from the engine, a further 154 lbs. has disappeared from the rest of the car, thanks to the stripped interior, a Lexan rear window, and the use of carbon fiber for the fenders, hood, and bumpers. On top of that you can throw on a set of those carbon-fiber wheels, which are 40 percent lighter than the regular forged rims (and we’d probably sweat away another few pounds worrying about scraping them against a curb every time we parallel parked).

As you’d expect, losing very nearly 200 pounds and adding 50 ponies aids performance. The Pista reaches 62 mph in 2.85 seconds and 124 mph in 7.6, compared to 3.0 and 8.3 seconds for the already outrageously fast GTB. Let’s be frank: The Pista can’t simply walk away from its little brother when you plant the throttle. But there’s no denying the extra kick in the back, the added urgency that, when you do the power-to-weight math, is the equivalent of losing over 400 lbs. from a GTB.

You hear the newfound power, too, particularly past 4,000 rpm, when the dyno graphs show the Pista beginning to assert its superiority. There’s a crisper edge to the exhaust note and far more volume, and when the rev needle homes in on its 8,000-rpm cut-off and your ears are ringing to the sound of 720 horses at full gallop, it’s hard to imagine wanting to be anywhere else. (It’s also hard not to wish this boosted V8 felt and sounded more like the 458 Speciale’s normally aspirated V8, which offered razor-sharp throttle response and shrieked maniacally all the way to its 9,000-rpm redline, although the Pista’s engine won’t leave you with a headache after a long drive.) 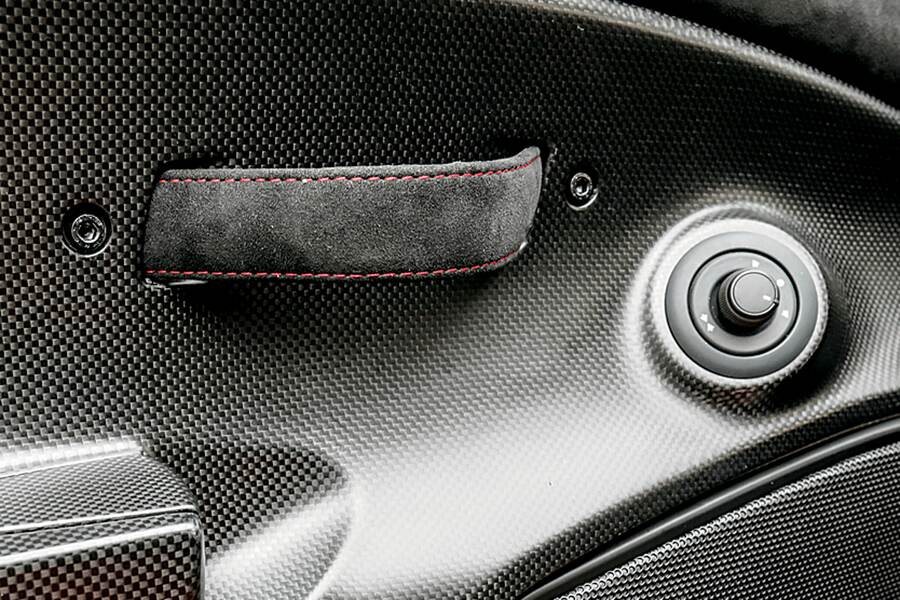 Dynamically, the Pista is dynamite. As we carve through the hairpin-strewn roads, we feel the advantage of the new, stiffer rubber at each corner and of every pound saved. We’ve driven pretty much every Ferrari built since the millennium over these roads, and this one has to be the best. The front end is so precise and the chassis so good at delivering almost zero roll while still offering enough composure to keep the fat tires keyed into the road that we can’t help but laugh out loud at the liberties we can take.

The brakes deserve some love, too. They’re carbon ceramic, as usual, but now the servo comes from the 488 Challenge car. This makes the pedal effort surprisingly high—you really need to give it a hard shove to get maximum stopping power, just like in a proper racing car—but the feel is fantastic.

BACK AT FIORANO that afternoon, we’re able to really punish those brakes, as well as explore the new Ferrari Dynamic Enhancer, part of Ferrari’s latest-generation oversteer control. Previously, Side Slip Control has linked the electronic differential to the traction control and magnetorheological dampers to help drivers build confidence running beyond the tire’s limits; now the brakes have been added to the party. 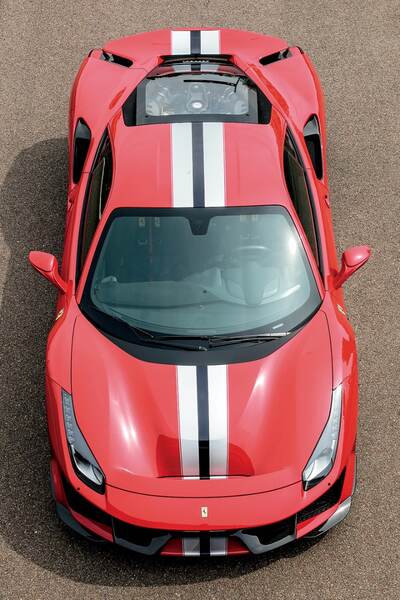 You access the FDE by twisting the manettino past the Race setting, which prioritizes fast and neat over playful, to the traction-control-less CT-Off. In operation, FDE is so subtle we’re barely aware it’s working at all…except that we’ve somehow turned into absolute driving gods and are able to exit fourth-gear corners with a half-turn of opposite lock as if it’s the most normal thing in the world.

Anyone lucky enough to own one of these cars really needs to get it on a racetrack, even if they don’t rate themselves as much of a track hero. That’s because it’s only here, on a closed circuit, that you can really safely explore both the massive stability provided by the S-duct, rear wing, and diffuser and the FDE’s ability to help you upset that stability and feel completely at ease doing it.

And don’t let the fact that the nearest track might be a few hours away put you off. Perversely, the most illuminating part of our entire Pista experience is the gentle ride back to Maranello on the autostrada after our time in the hills. Freed from the compulsion to drive as fast as humanly possible, we’re reminded of some of the Pista’s inherent weak points: the fiddly multimedia system with its minute screen, the still-annoying turn-signal buttons on the wheel, and how irritating the optional [in Europe, anyway—Ed.] four-point harnesses are whenever we drop something on the floor or have to reach out the window for a toll ticket. 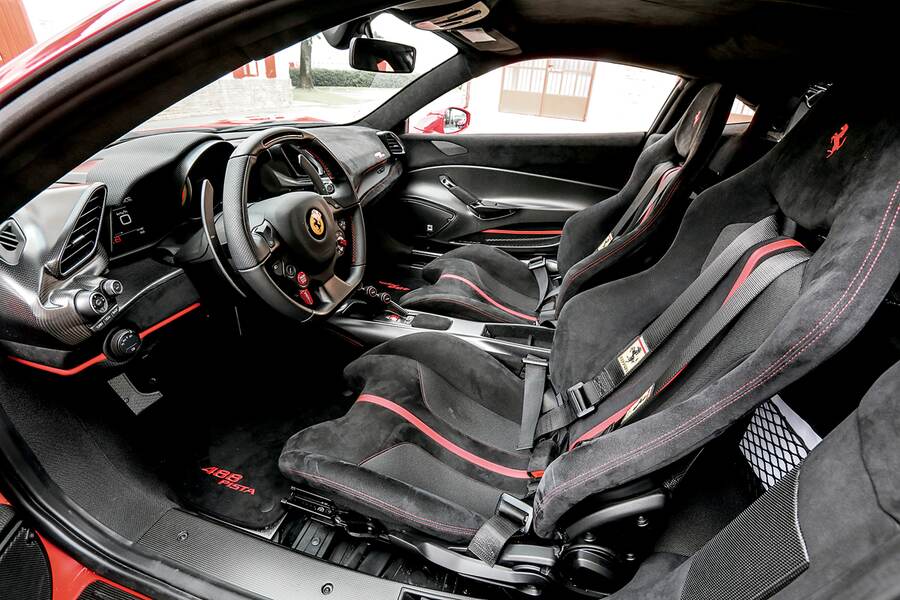 But we also discover a car that is far more useable than expected. The Pista is on another plane in terms of performance compared to the 488 GTB, yet its ride comfort and highway noise levels are still so low we’d think nothing of jumping in it and covering hundreds of miles on the way to a weekend of fast laps. That’s in stark contrast to the raw and raucous 458 Speciale, which was definitely something to be enjoyed in a concentrated hit, rather than a longer burst.

In the end, it’s difficult to find much to dislike about the 488 Pista. From its mighty engine to its stellar handling to its surprising usability, Ferrari’s latest is unquestionably a wish list fulfilled. 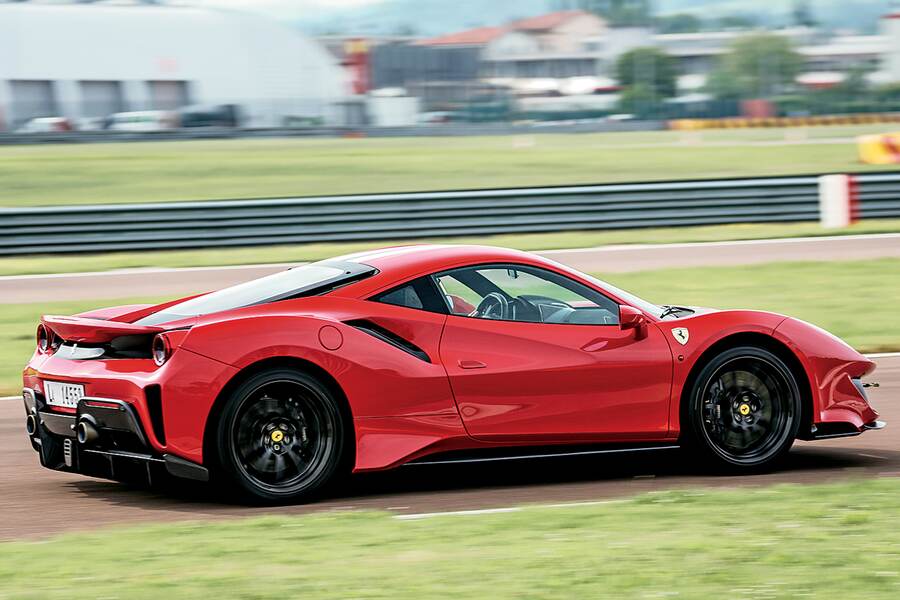 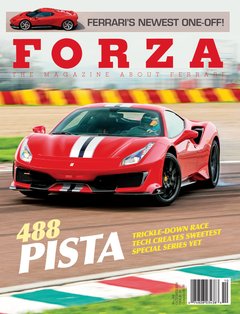