T is for Torque

Swapping the horsepower-heavy V12 for a turbo V8 with a manic midrange creates a far sportier GTC4Lusso. 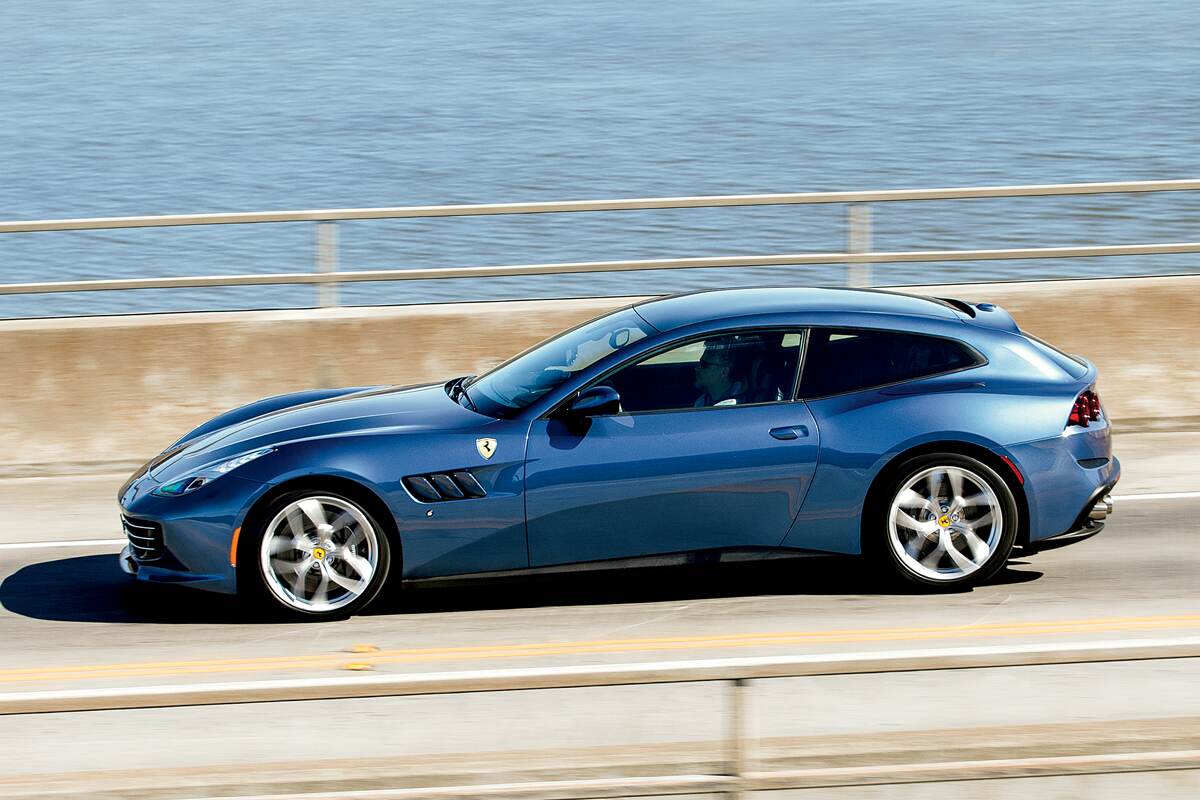 A little eye rolling occurred around FORZA HQ when, in September 2016, Ferrari announced the GTC4Lusso T. At first glance, it appeared Maranello had simply created a decontented Lusso, with a turbocharged V8 in place of the original’s normally aspirated V12, no innovative 4RM all-wheel-drive system, and a significant drop in the base price. Yes, rear-wheel steering had been added and Ferrari promised sharper driving dynamics, but the company seemed just as keen to emphasize the car’s improved fuel economy and resulting claimed 30-percent longer range between fill ups.

This March, expectations firmly in check, I finally had a chance to drive the Lusso T. And you know what? It’s fantastically fun, miles ahead of the V12 version in terms of driving enjoyment. Given the choice, the T is unquestionably the one I’d buy.

But you know what? There’s nothing about the turbo V8 model that makes the normally aspirated Lusso redundant. Although very similar in most ways, on the road they can be two very different machines. 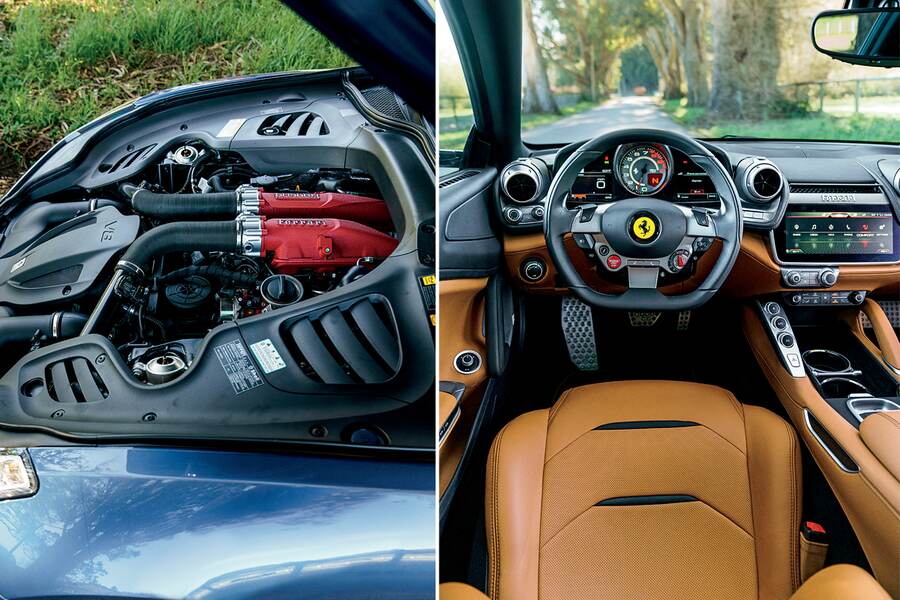 BESIDES THE ENGINE, rear steering, and missing front-drive setup, pretty much only the wheels, dashboard badge, and some computer reprogramming differentiate Lusso from Lusso T. Everything else, inside and outside, remains unchanged—and that’s fine by me.

Our test T’s light blue (Blu Mirabeau) paint nicely highlights the aluminum body’s curves and creases while still staying suitably understated. The optional chrome-edged front grille gently draws my eye, while the panoramic glass roof helps the Ferrari feel smaller on the outside and much more spacious inside. (I think the optional roof is an admittedly pricey no-brainer, although I’m apparently in the minority; a little informal polling suggests fewer than half of Lussos are ordered with it.) Overall, the Lusso looks low, wide, and long, and hunkers down sweetly on its stunning 20-inch forged wheels.

Open the long hood and you’ll find the T’s 3,855cc twin-turbo V8, which it shares with the Portofino. In Lusso guise, the engine makes 610 hp at 7,500 rpm (10 more than in the Portofino) and up to 560 lb-ft of torque from 3,000-5,250 rpm. “Up to” because, like all of Ferrari’s current turbocharged V8s, this one utilizes Variable Boost Management to limit boost pressure at low revs and in the lower gears, mimicking the power curve of a normally aspirated engine—albeit a much torquier one than its displacement would suggest. The additional 46 lb-ft of twist over the V12 allowed Ferrari to fit some taller gears for better economy. 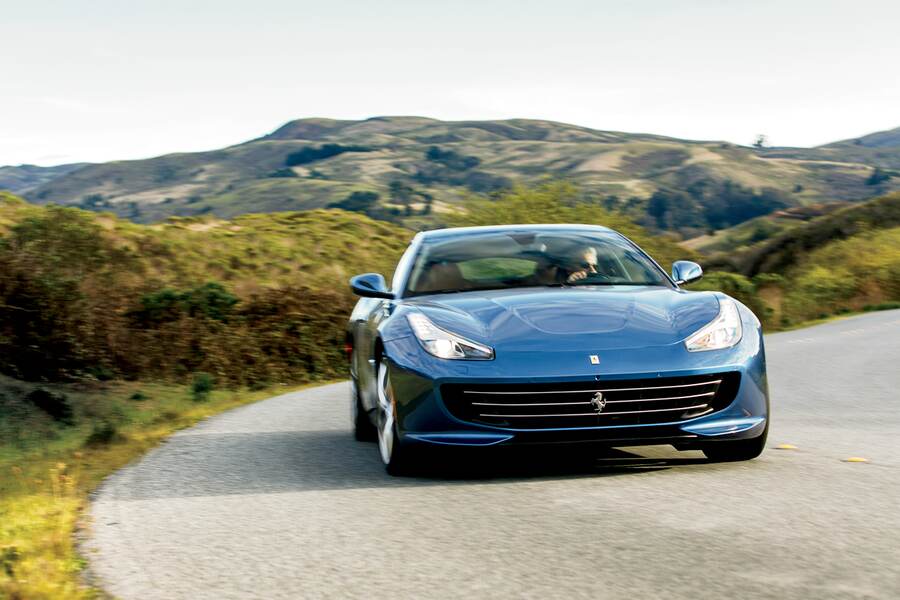 The V8 sits about a foot behind the front axle line. Pushing the smaller, lighter engine so far back in the chassis and removing the 4RM hardware (a two-speed transmission bolted to the front of the V12) has reduced overall weight by around 120 pounds and shifted the car’s weight distribution rearward by 1 percent, to 46/54. These two changes would naturally make the T more eager to change direction than its big brother, and that’s before accounting for the effects of rear-wheel steering.

First used by Ferrari on the F12tdf, Passo Corto Virtuale (for Virtual Short Wheelbase, though it’s more often referred to as 4WS, for four-wheel steering) turns the rear wheels up to one degree opposite the fronts at low speed for increased agility, as if the wheelbase is shorter than it really is. At higher speeds, the rear wheels turn up to one degree in the same direction as the fronts for improved stability. The 4WS’s responses are integrated with the T’s electronic differential, SCM-E suspension, stability control, and Side Slip Control.

ANYONE WHO’S EVER WONDERED about the difference between horsepower and torque should drive the Lusso twins for a real-world answer. Alternately, just imagine that the “T” stands for torque, rather than turbo. 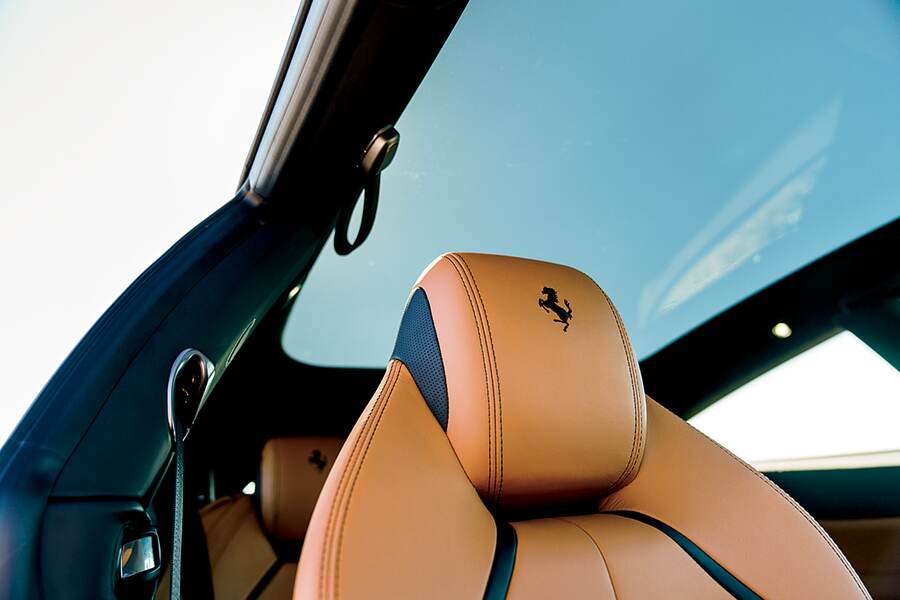 The Lusso T is all about low and midrange grunt. I feel the difference immediately, on my way to the first stop light after picking up the car, when the Ferrari lunges forward with serious intent at just 3,500 rpm; that’s well before the V12, which produces a not-inconsiderable 514 lb-ft, would even wake up. The turbocharged engine’s throttle response is quick and lag is essentially non-existant. Although the V8 isn’t as flexible or amenable at really low revs—the V12 is happy to be lugged around at 1,000 rpm—as long as the engines are spinning below 6,000 rpm, the turbo’s the one to have.

Keep the loud pedal down, though, and the 690-hp V12 becomes the weapon of choice, with its ever-increasing rush of power and classic Ferrari howl. The 6.3-liter engine feels like it can rev forever, and while the comparatively raucous turbo V8 is no slouch as it winds toward its 7,500-rpm redline, it definitely loses the ferocity of that mighty midrange.

The V12-powered Lusso also holds a clear edge in traction. If you get too aggressive with the throttle in a corner, the all-wheel-drive system simply shrugs it off and slings the car forward. That’s not always the case with the rear-drive V8 version, which can easily find itself chomping at the bit rather than getting the thing between its teeth and going. 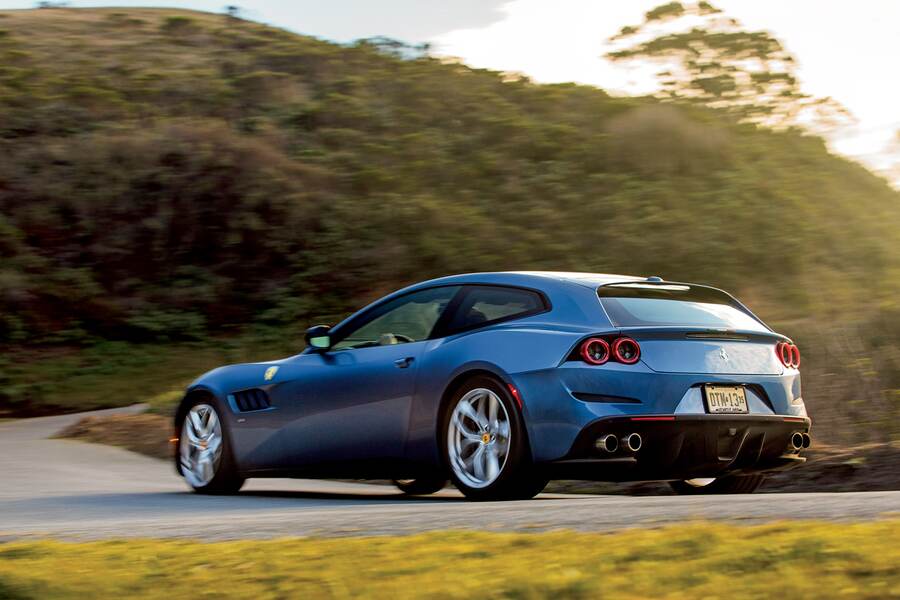 This hesitancy is primarily noteworthy in the context of doing everything else so sublimely, however. For example, the T dives into corners with an eagerness and precision the V12 version can only dream of; while it’s no 488, it’s surprisingly similar to the smaller Portofino. (Ferrari quantifies this newfound quickness as the response time between the front and rear axles having been cut by 6.5 percent, and steering wheel activity dropping by 2.5 percent.) The V8 model doesn’t exactly shrink around me in the corners, but it never feels as big as the V12 version, either.

The T is much more fun on smooth pavement, where the heavier V12 Lusso can feel a step too slow. Tearing up a winding road, I’m able to brake later and turn in more aggressively, then get whacked back in the seat as the V8 barks, the mountain of midrange torque hits, and the rear end steps out slightly. It’s an addictive sensation, one that has me enthusiastically short-shifting in the corners in order to enjoy the full rush coming out.

As part of the T’s sporting mission, Ferrari recalibrated its magnetorheological dampers to reduce body roll. The lessened lean is noticeable and welcome, as is the car’s improved body control over the rough stuff. When the T and I tear over the same crumbling back roads I so enjoyed in the V12 Lusso [“Life With Lusso,” FORZA #162], it can’t put down the power as well but does an even better job of keeping pitch, dive, and sway at bay. Pushed hard enough to judder and move around at speed, the turbo Lusso never loses its composure, even when braking hard into bumpy downhill bends. 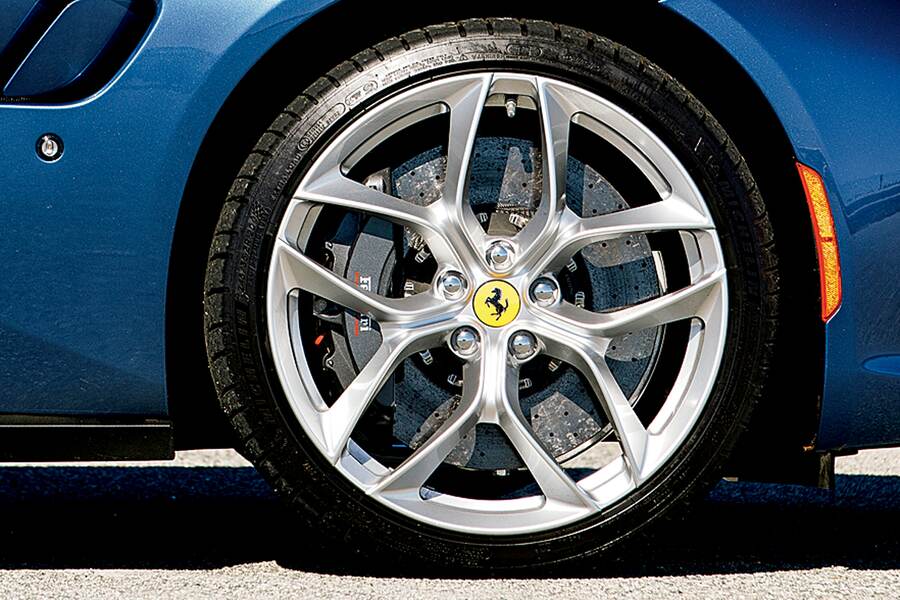 WHEN IT’S TIME TO DRIVE from Point A to B, the T feels much like the V12 Lusso. The ride is smooth and comfortable yet slightly taut—the tarmac’s texture is transmitted directly to the seat of my pants, delicately keeping me in touch with the road at all times—and bumps remain at a distance. Serenity abounds in the cockpit when cruising around, with very little wind noise and only a gentle murmur from the engine, at least until I stand on the throttle.

Around town, the T proves surprisingly nimble for its size, and seems to offer an even tighter turning radius than the V12 Lusso, which is already very impressive in that regard. The turbocharged car is also quicker off the line and better at slicing its way through urban congestion.

While the T is the Lusso I’d buy (in addition to the glass roof, I’d spend the savings on the optional front suspension lift system, ideal for keeping the front spoiler from scraping and another no-brainer in my book) that won’t be the case for everyone. There are a few reasons, starting with the lack of four-wheel drive. Anyone who wants an all-weather, all-road Ferrari will unquestionably be better served by the V12 version. That larger, higher-revving, normally aspirated engine is another reason; leaving aside any question of cachet, the V12’s high-rpm rush of power can’t be beaten. Finally, the T isn’t quite as relaxed a travelling companion, though the difference is fairly small. 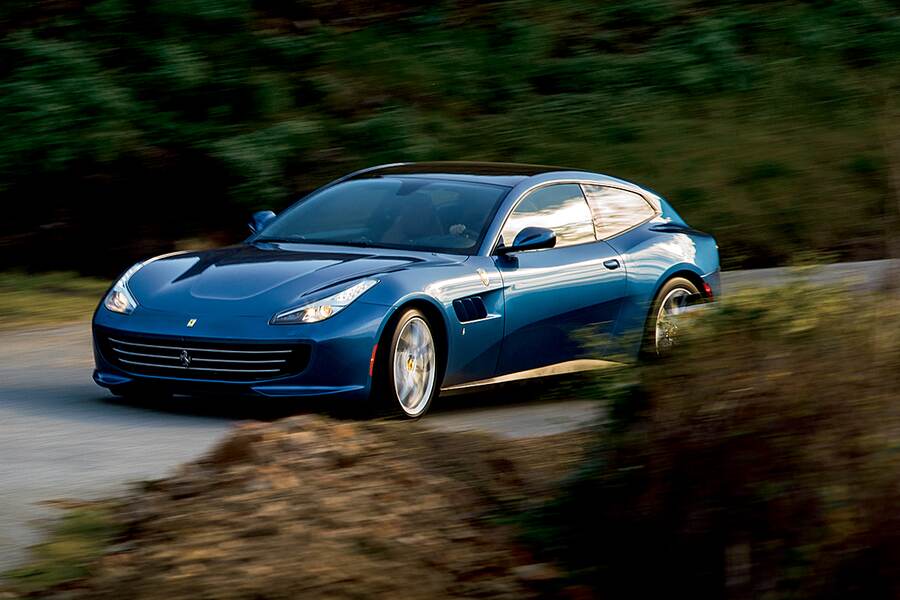 Not so the T’s sporting advantage, though. The turbocharged Lusso’s purpose and poise immediately distinguish it from its near-identical-looking sibling, and I found myself enthusiastically driving it in the manner Ferrari apparently intended far more often than I’d expected. Forget eye-rolling: Ferrari delivered what it promised, and then some. 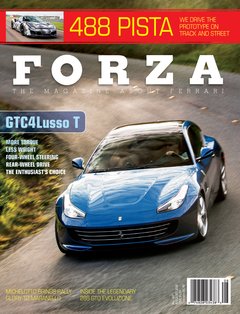