We spend a day eating up the miles in three of Maranello’s big, fast, luxurious four-seaters. 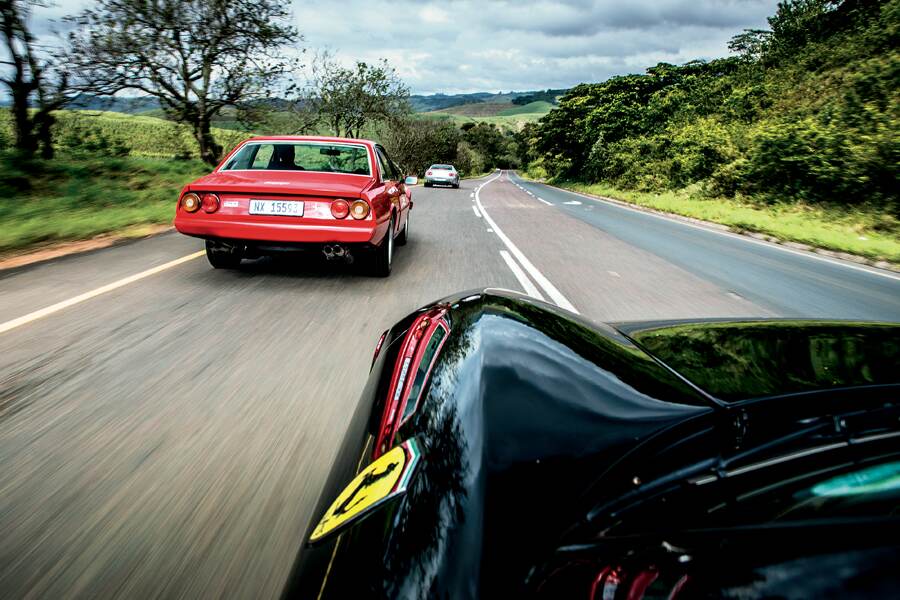 Although beloved by their owners, Ferrari’s 2+2s have never for the rest of us generated the excitement of their two-seat stablemates. That’s certainly understandable: The four-seaters lack a direct racing heritage, their designs aren’t as exotic, and they’re intended for touring rather than tearing up mountain passes and racetracks.

Nonetheless, these are pure-bred Prancing Horses and therefore deserving of attention, even though I’ll admit to owning a few (admittedly uninformed) prejudices against the breed. Today, I’m lucky enough to be presented with not one but three of these big GTs. All belong to a serious collector based on the east coast of South Africa, so I’ve travelled to Durban to meet him and get my first taste of the 400, 456M, and 612 Scaglietti.

ESSENTIALLY A LARGER-ENGINED VERSION of the 365 GT4 2+2 that was introduced in 1972, the angular 400 can easily be viewed as the least “Ferrari-like” design of its era—but look closer and you’ll see clear connections to the iconic Daytona around the mid-line, the rear overhangs, and even straight from the rear. I think it’s the least-attractive car here, but over the course of the day, and in the time since, the 400’s shape has grown on me. At least a little. 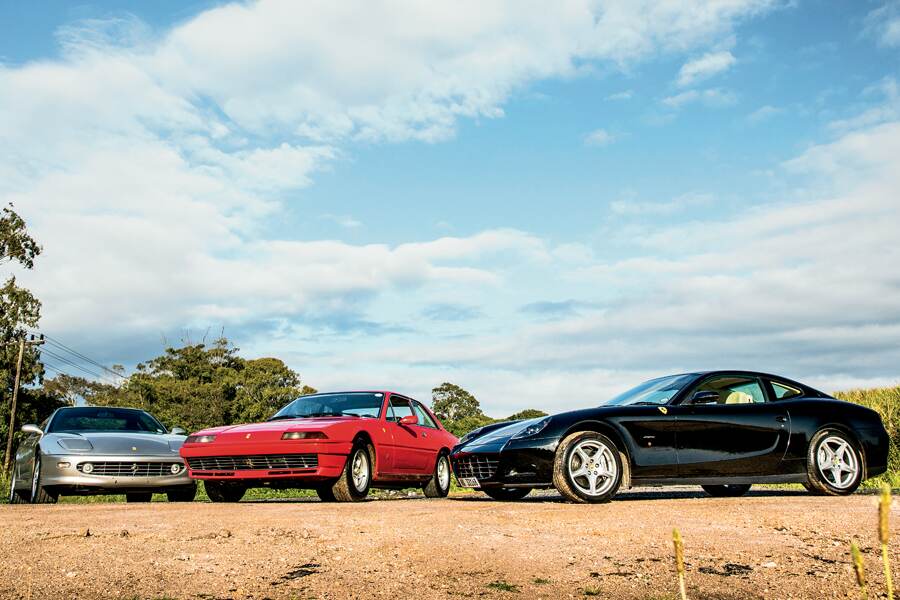 I open the hood and discover a gargantuan 4.8-liter V12 that completely fills the expansive engine bay. The convoluted piping and wiring would surely give any mechanic fits, although I’m more interested in the engine’s performance. I don’t expect fireworks, but I do wonder if the modest (in modern terms) 340 bhp will be enough to push the Ferrari along at even an honest pace.

This 400 wasn’t well cared for by its previous owners (as is, regrettably, the case with many of these cars), so parts of the interior have been reupholstered, including the door panels and seats. The front seats are by far the cushiest of any in the three Ferraris present, while the rears are, by a small margin, the least appealing. It seems ergonomics in general were not considered all that important back in the 1970s; once settled into my ideal driving position, I can’t properly see the gauges.

No matter. When I turn the key, the V12 rumbles to life, and when I lean on the accelerator I’m treated to a fruity, rough song from the four exhaust pipes that protrude from underneath the angled rear bumper. The throttle pedal has a very long travel, and once I’m cruising along I need to push it all the way to the floor to prompt the three-speed GM Turbo Hydra-Matic transmission to select a lower gear. 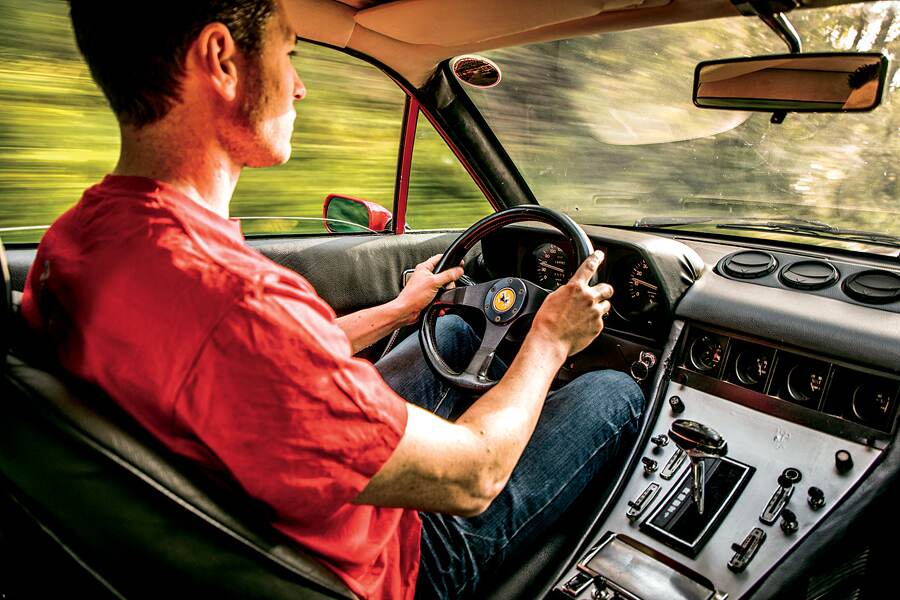 Once that happens, the 400 accelerates with a more-than-acceptable level of enthusiasm. I had expected a lazy response, but the V12 feels happy, and delivers its best, when I use the full rev range.

While it’s difficult to assess the 400 in light of its newer, more sophisticated siblings, this Ferrari feels much more like a fast tourer than a GT, let alone a sports car. I can imagine happily spending a fair number of hours behind the wheel covering long distances, even though the car is louder and has a less compliant ride than the others. On the other hand, the 400’s trunk is by far the largest of all three cars, able to swallow the luggage of four adults—even if those adults couldn’t happily all fit in the cockpit.

Away from the straight and narrow, the 400 feels heavy; it doesn’t inspire sporting confidence or like to be chucked into back-to-back corners. On the plus side, the brakes work better than expected, and produce less nose dive than anticipated, while the smaller-than-original steering wheel allows a more direct connection to the front wheels. The only time I miss the larger wooden original is when wrestling with the non-power steering at parking-lot speeds. 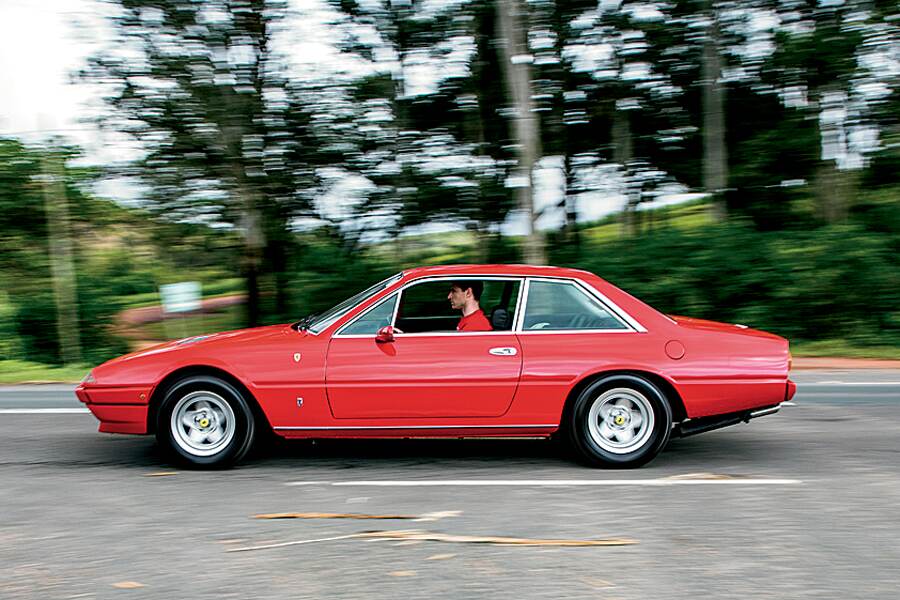 I admit I had low expectations for the 400, but I end up liking it more than predicted. It’s definitely a classic car, for better or worse, with a distinct character. I haven’t driven a 400 equipped with a manual transmission, and suspect it would be the enthusiast’s first choice, allowing for less slip in the drivetrain and more involvement for the driver.

COMING ON THE HEELS of the 400 lineup, which ended with the still-nearly-identical-looking 412 in 1990, the 456 brought a major advance in the exterior design of Ferrari GTs. To my eyes, the 456M (introduced in 1998) is also the best looking of the three cars here.

The 456 boasts an eminently elegant silhouette (courtesy of Pininfarina, which penned the lines of all three of these Ferraris) and a shape that perfectly represents the car’s mission as a sporting GT. It’s also a look that clearly overlaps the design eras of the late-’80s and the ’90s. The pop-up headlights, for example, hint back to cars like the Testarossa, while the indented air outlets behind the front wheels offer a very modern interpretation of aerodynamic airflow management that still features on Ferraris to this day. 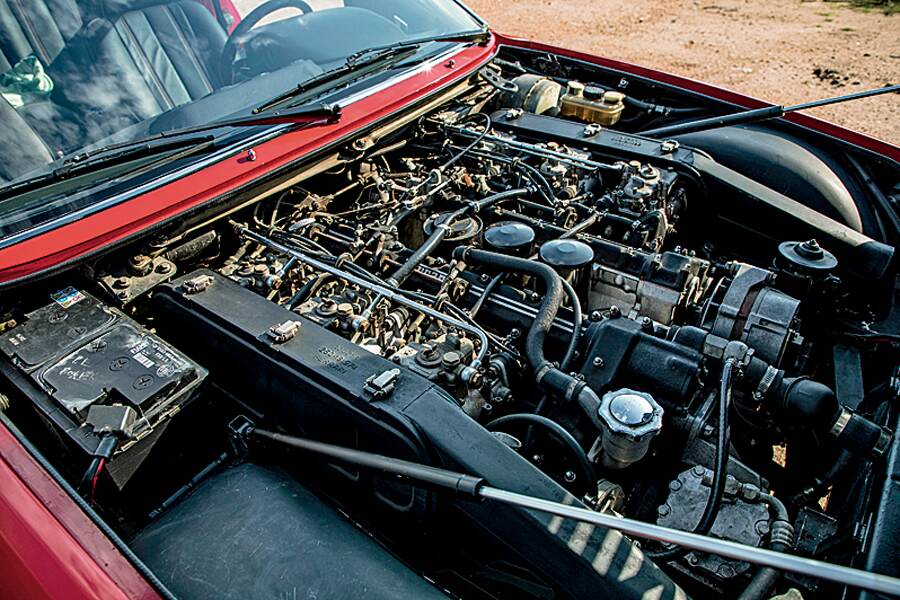 Inspecting the 5.5-liter engine reveals another design highlight. When I pop the hood, the headlight covers stay behind—a sophisticated, and rather racy, look. I also have a clear view of the whole bay and even the wheel covers, which must make the V12 easier to work on.

Given the exterior’s wonderful aesthetics, it’s no surprise the 456M’s interior offers a much more modern layout than the 400’s. The center console and transmission tunnel are still wide, but the switchgear is clearly visible. The 456M’s front seats are slightly firmer than the 400’s, and they’re also more supportive. (The view over the long silver hood is serene, with the subtle creases barely visible as they run up each side of the otherwise smooth metal from the headlights.) The situation in the rear is roughly the same as in the older car, with meager legroom and a low ceiling; it’s too cramped to be comfortable for full-grown adults.

Ferrari paid special attention to one of the features that has graced its cars for so many decades: the metallic open-gate gear selector. Although this is a GTA version with a four-speed automatic transmission, pressing the button on the top of the gear lever and moving the lever down to D feels like a special occasion—even for a die-hard manual-transmission fan like me. 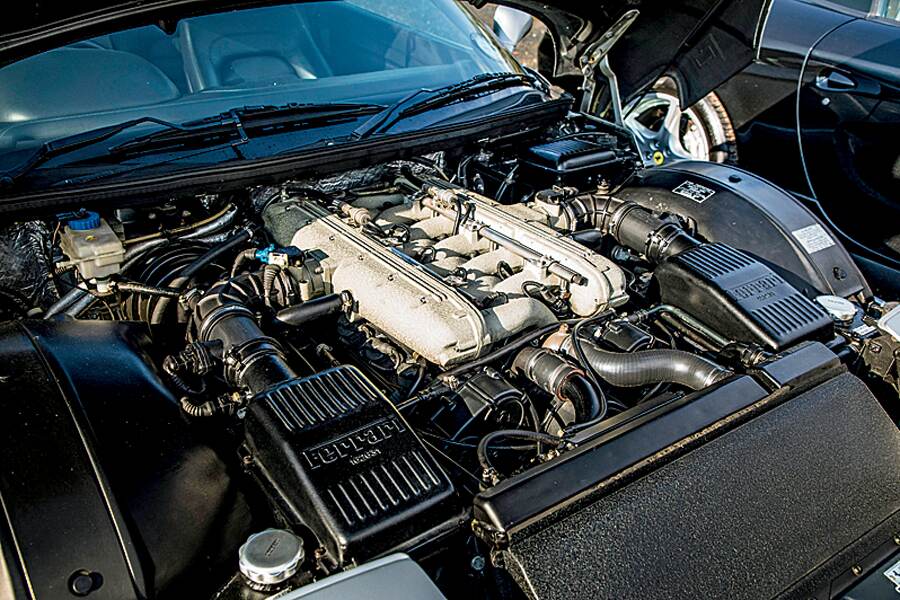 I press the Sport button to ensure I’ll get the full Ferrari experience, then turn the key and blip the throttle—and am a bit aurally underwhelmed. The 456M is the quietest car here. This might appeal to owners who drive their Ferraris regularly or have sensitive passengers, but it’s not really loud enough for my taste. Pushing the long-throw pedal toward the floor and letting the 442-hp V12 eagerly rip toward its 7,250-rpm redline, however, delivers significantly more grunt, along with much brisker performance, than the comparatively sedate 400.

Another positive: This Ferrari feels more compact on the road than it actually is. This is due in part to the way the hood slopes gracefully towards the front bumper, so I know exactly where the front of the car is.

Although its suspension setup is still very much comfort-oriented, the 456M feels a lot more enthusiastic upon turn in than the 400. In addition, the brakes do an admirable job and offer just enough feel through the pedal. 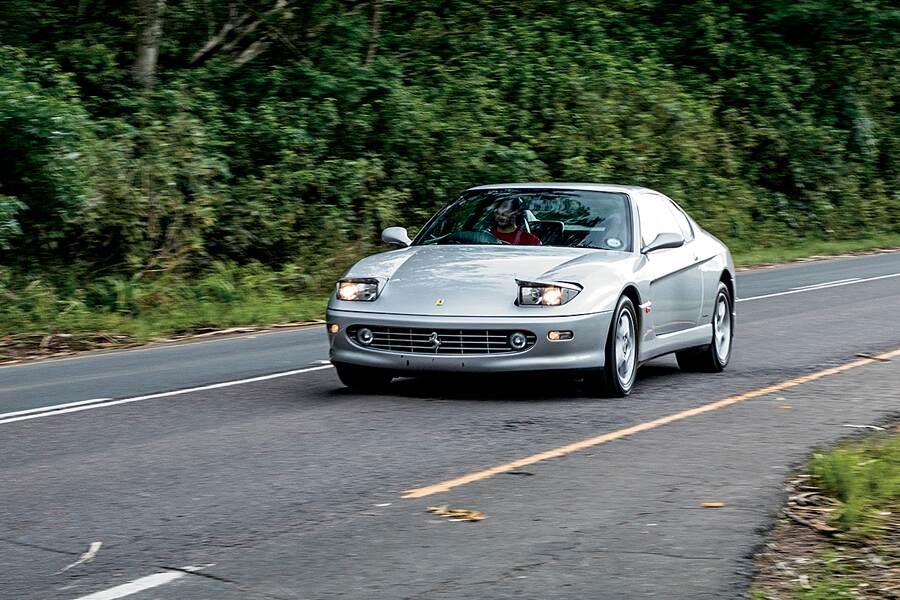 I’m also a fan of Ferraris that come in colors other than red…and when I browse the online classified ads it appears that’s a description of most 456s. Shades of metallic blue, black, silver, and dark burgundy seem to have been the preferred choice at the time, possibly because they’re less flashy than Rosso Corsa or Giallo Modena, and the fact most press pictures of the time were of non-red examples.

THE 612 SCAGLIETTI looks, and is, the largest of this trio. It’s also the boldest design, and gives the car the presence a 540-hp GT deserves.

The Scaglietti offers the cabin-at-the-rear look that has become the general look of Ferrari’s modern GTs, thanks to a 5.7-liter V12 that sits entirely behind the front axle. While the passenger and luggage compartments make up a visible chunk of the design, there’s still an overall fluidity of line all the way from the front to the rear. The significant side surfaces are gracefully lightened by two creases, one below the shoulder and the other above the sill. 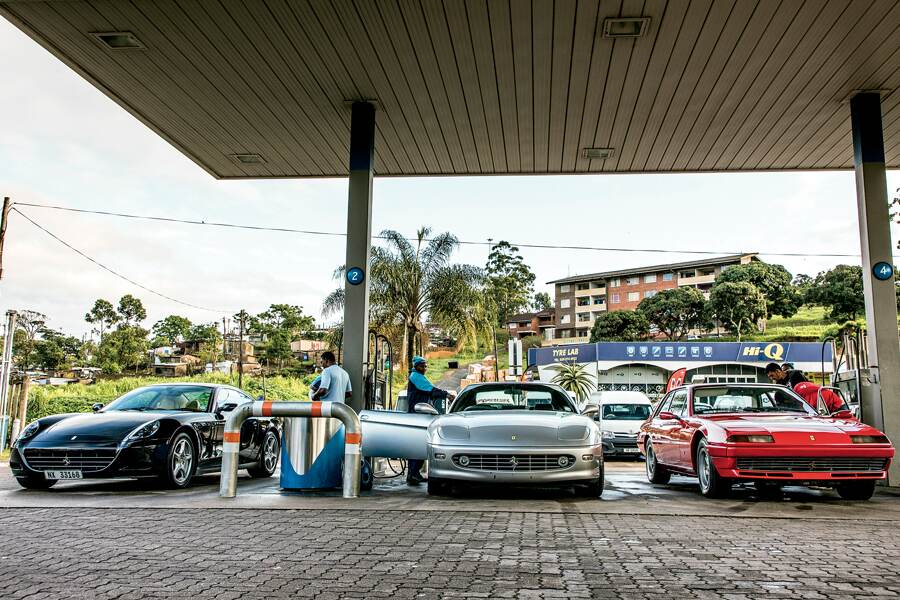 The reason behind the Scaglietti’s exterior size is immediately clear when I slide into the rear seat. Despite being 6-foot-1, I can sit comfortably in the back and have enough legroom. I can even keep my head straight up, something that can’t be done in the other cars.

I’d rather sit up front, of course, and this car’s Daytona-styled seats are comfortable and very supportive. The 612 feels more modern than the other two Ferraris due to the information screen located behind the steering wheel, as well as the swathes of modern switches and buttons. This car’s two-tone interior (which contributes to the cabin’s sense of spaciousness), centrally located tachometer, and cast aluminum pedals are cues that have become integral to modern Ferraris.

Compared with the 456M, the 612’s redline has been raised, to 7,500 rpm. When I start the 5.7-liter V12 and blip the throttle, I realize there’s less inertia at play, along with a more intense exhaust note. On the move, it’s also readily apparent there’s significantly more power to work with; even at partial throttle, the 612 covers ground rapidly. 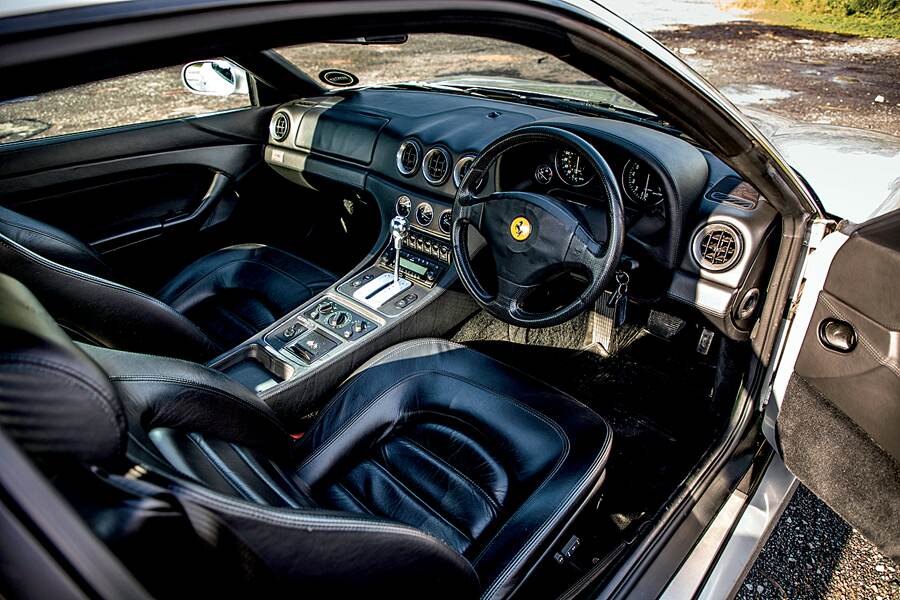 As a result, I instantly find myself wanting to drive the car harder and tackle corners with more zeal than the other two. Adding to this sporting appeal are the steering wheel-mounted shift paddles that control the single-clutch six-speed F1 manual gearbox. (The earlier 2+2s both use torque converter automatics.)

Where the 456 nicely shrinks around me, I’m always aware of the 612’s bulk; this is the car I’d least like to weave around through crowded city streets and parking lots. Fortunately, the Scaglietti’s nose is fairly upright, so I know where the car starts, although the front end feels weighty at all times.

Driven aggressively, however, the 612 reveals handling and braking prowess far beyond that of the 400 and 456. Better still, the newest car is more playful than the older ones, and offers the most engagingly free-revving engine. Aside from its size, which comes with its own benefits, there’s nothing not to like about the Scaglietti. 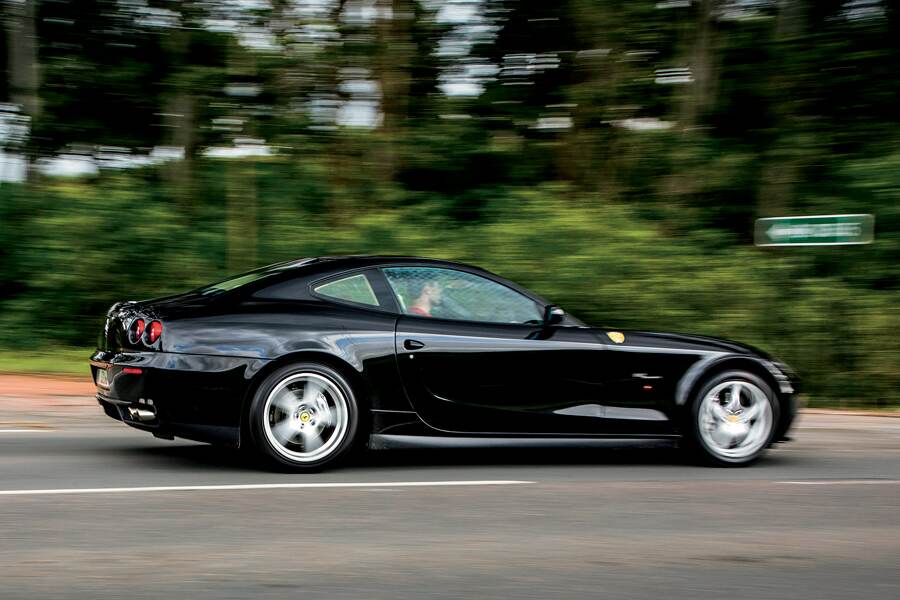 THERE’S NO DOUBT which car is the “winner” of this comparison: the 612. It’s the fastest car of the trio, with the most spacious cockpit and the best performance for the enthusiast driver. It’s simply a brilliant all-rounder, and I’m not at all surprised the owner chose it over the others for a 1,000-mile trip across South Africa a few years ago.

That said, each of these Ferraris offers a distinct driving experience and likely appeals to different owners. The 456 sits nicely in the middle ground between classic and modern. The 400 is clearly the cruiser of the bunch, and it’s the least expensive by a significant margin.

Spending a day with these four-seaters wiped out my prejudices about the breed. No, they’re not as exciting to drive or look at as the lithe, slinky two-seaters, but they’re more comfortable, more usable, more spacious, and, at least in the case of the 612 Scaglietti, capable of serious performance. If you’ve ever considered a Ferrari 2+2, don’t let your preconceptions get in the way; you might be as surprised as I was once you get behind the wheel. 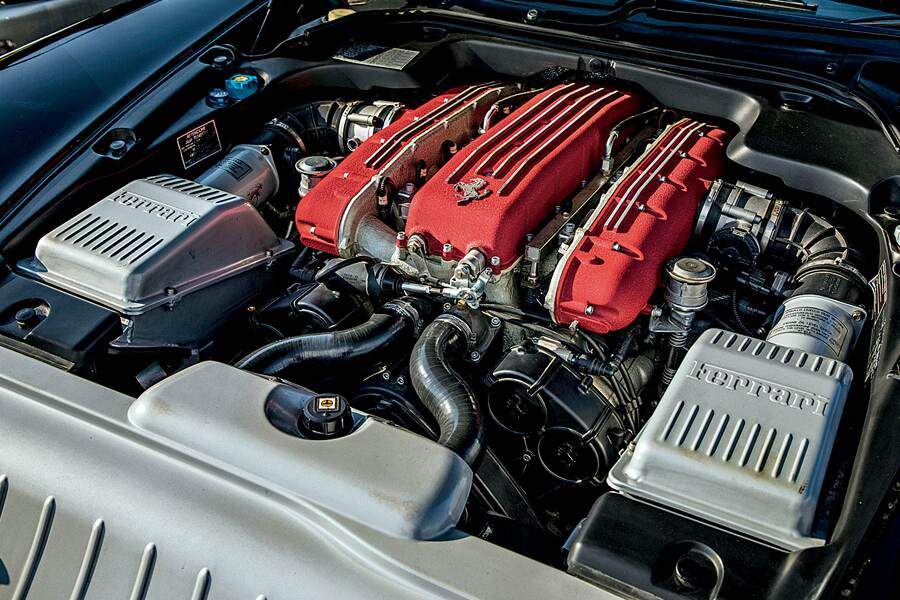 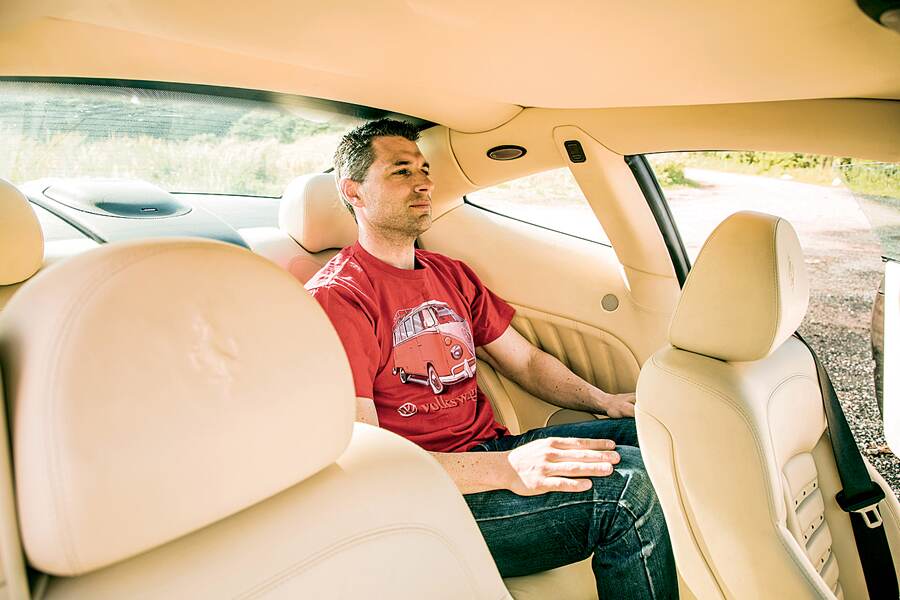 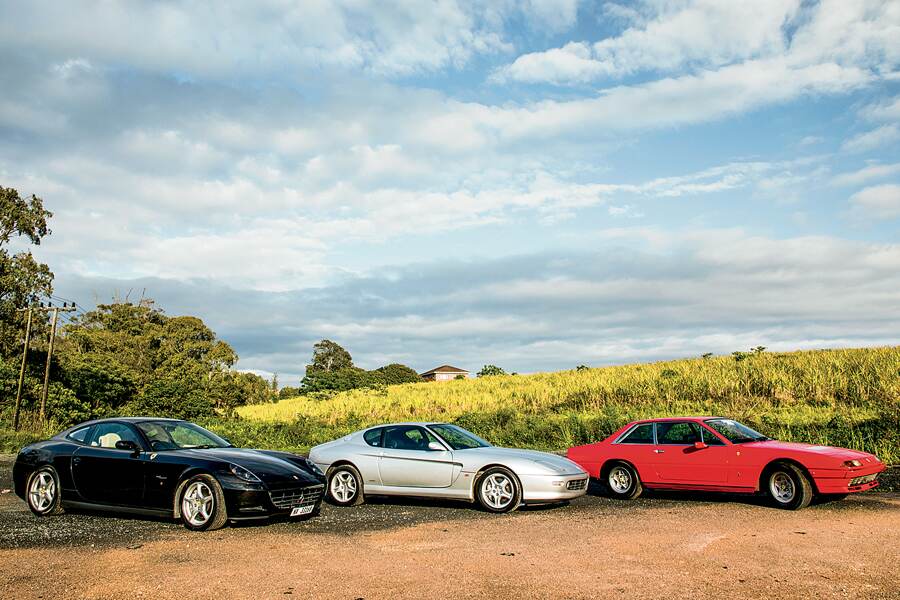 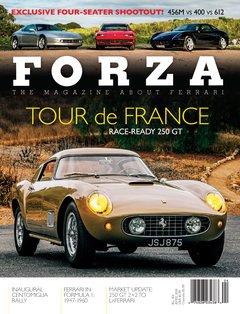