This privateer Ferrari enjoyed an impressive run of success in the early 1950s. 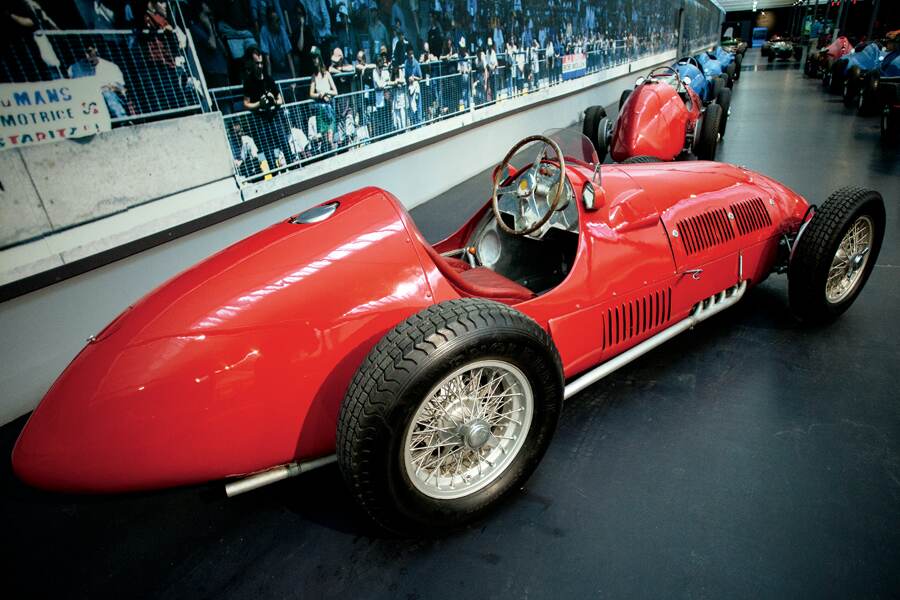 Story and Photos by Robb Pritchard

For most of us, owning a car that once graced a favored bedroom poster or appeared in a beloved book will remain an unattainable dream. But some enthusiasts end up with both the means and the inclination to buy what they want, and there may be no better example of this lucky breed than Fritz Schlumpf.

After earning his fortune, this French textile magnate started buying Bugattis, quickly amassing the world’s largest collection. He then began buying Le Mans winners, Formula 1 cars, and weird and wonderful creations all the way from the very dawn of motoring, nearly 500 automobiles in all. Today, his collection resides in the Cite de l’Automobile museum in Mulhouse, France.

In the last issue, I profiled one of the museum’s 11 Ferraris, a one-of-a-kind 375 MM he purchased from Bao Dai, the former Emperor of Annam. Now, it’s time to look at a different Ferrari, this one a single-seater. 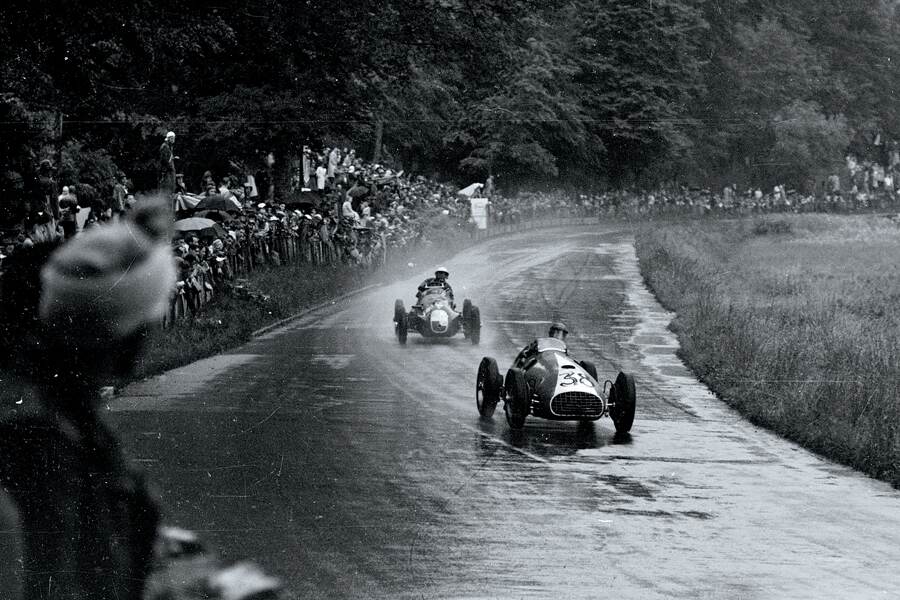 In the museum’s furthest hall sits an impressive lineup of Grand Prix cars, which ends with Robert Kubica’s 2010 Renault R30, contains such historically significant creations as Michael Schumacher’s 1995 World Championship-winning Benetton B195, and includes cars that ran in the very first year of the modern-day World Championship, 1950.

One of the rarest, most interesting, and possibly least-known cars you’ll find here is the ex-Scuderia Espadon 166 F2 (s/n 010). The model is Ferrari’s first purpose-built single-seater (the 125 Grand Prix car was derived from a sports car), while s/n 010 is one only two experimental 2.5-liter V12-powered F1 cars Ferrari ever produced, as well as the only one to win races.

Back in the days before live television broadcasts (and the internet), all forms of motorsport were insanely popular; crowds of over 300,000 spectators weren’t uncommon. With an eye on funding its more serious racing exploits, Scuderia Ferrari made eight F2 cars for privateer teams, a couple of which were works supported. 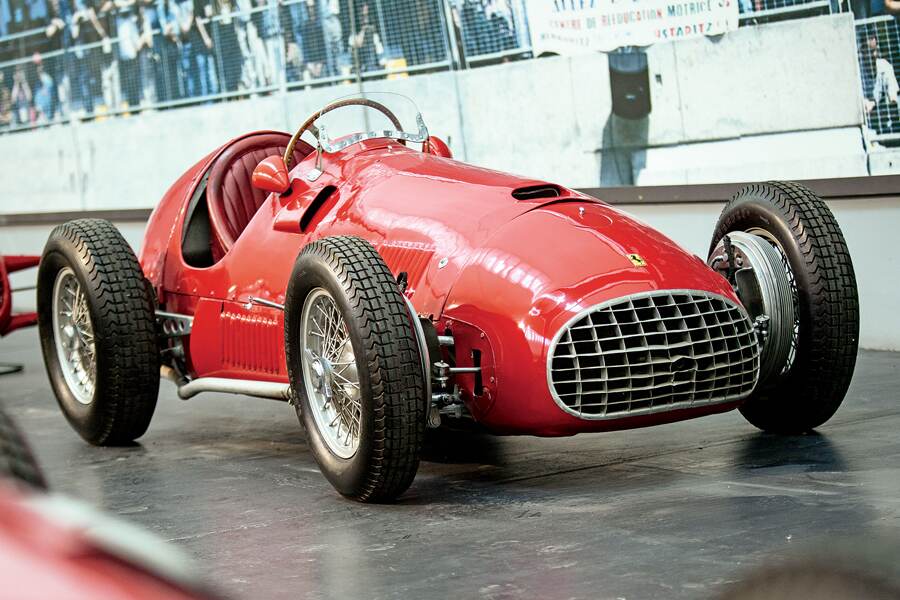 Designed around Gioacchino Colombo’s 1.5-liter V12, enlarged for this purpose to a full 2 liters, the 166 F2 literally ran circles around its competition first time out, with driver Raymond Sommer lapping every other competitor at the 1948 Florence Grand Prix. (Another driver who made a name for himself in a 166 F2 was a young Argentine, who raced in an unusual yellow and blue color scheme, named Juan Manuel Fangio.)

A few years later, in the winter of 1950, wealthy Swiss restauranteur Rudi Fischer wanted to upgrade his aging, uncompetitive Simca-Gordini. Fischer, the main driver of privateer team Ecurie Espadon, approached Enzo Ferrari about purchasing a single-seater with an enlarged, 2.5-liter V12 for another form of racing that was wildly popular in the postwar years: the non-championship Formula (or Formule) Libre races.

Ferrari saw plenty of merit in the project. The popularity of the races would generate extra publicity for his burgeoning team, and, more important, such a car would serve well as a test bed for a future Formula 1 machine, as the sport’s governing body had recently proposed the introduction of 2.5-liter normally aspirated engines for 1954. 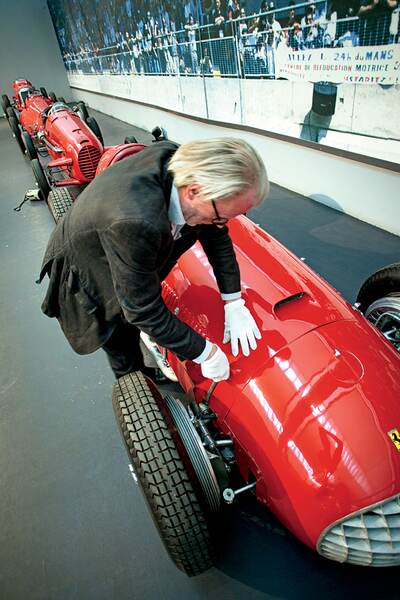 So Fischer got his car, a 1949 166 F2 run by the factory team in 1950 (although history hasn’t recorded who it was driven by). A 2.5-liter V12 from a road-going 212 was installed, its main modification being the use of row of three Weber 32DCFs in place of the usual single carburetor, which increased the power to 200 bhp. The resulting car was alternatively recorded as a 166 F2 212, which gets a bit confusing since s/n 110 was really an F1 car.

Ferrari, wanting a full feasibility study, built a second car (s/n 102) for its own use. S/n 110, run by the renamed Scuderia Espadon (presumably to boost its Ferrari connection), had a traditional swing rear axle, while the works car had a more sophisticated De Dion setup.

The first race for the two cars was the 267-mile 1951 Syracuse GP in Sicily. There, they finished a promising two-three, Fischer just behind Dorino Serafini. They raced together once more a couple of weeks later in Pau, where Fischer took sixth. Serafini retired with steering failure, after which his car was returned to 2-liter F2 configuration again, effectively ending the 2.5-liter branch of development. 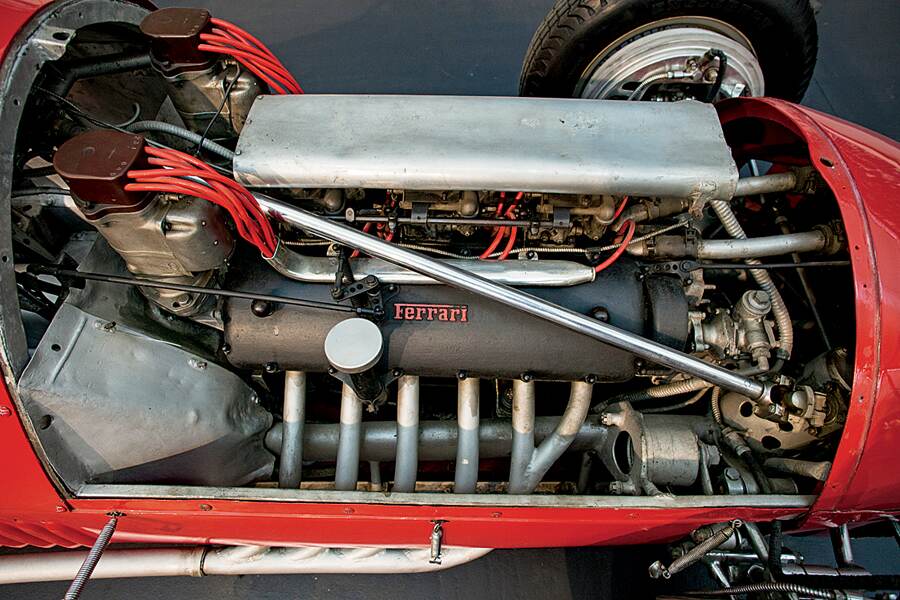 Fischer continued to race and enjoy success in s/n 110. He finished a credible third behind the two works 375s of Alberto Ascari and Serafini in the non-championship race at San Remo. The Bordeaux race, laid out with straw bales between the benches and grandstands in the city park, wasn’t considered important enough for the Ferrari and Alfa teams, and against lighter competition Fischer managed a fine second behind the much more powerful 4.5-liter Talbot-Lago of Louis Rosier.

For the first points-paying round of the 1951 Formula 1 World Championship, the Swiss Grand Prix on the fast Bremgarten circuit, Fischer struggled with rain, mud, and then oil smearing his visor and glasses, and slewed his unsighted way around to a rather disappointing 11th.

In his next race, an F2 event at the Aix-Les-Bains circuit in France, he took the win, a feat he repeated in the wet Angouleme race on the Circuit of the Ramparts, also in France. In the German Grand Prix, held on the legendary Nürburgring Nordschleife, Fischer scored an impressive sixth-place finish, the first non-works finisher. Later in the year, he won the Freiburg hillclimb in Germany, meaning that this Ferrari raced in four different racing series and won in two of them. 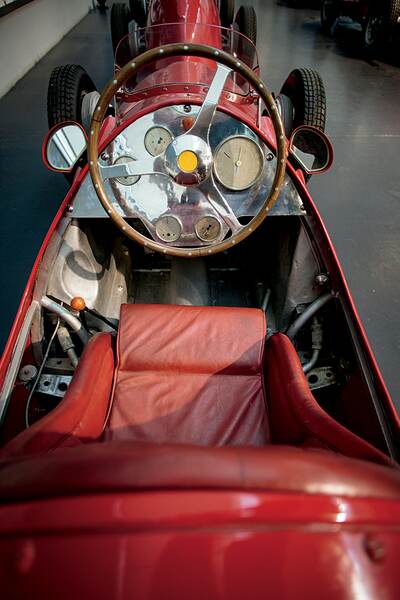 Fischer’s last drive in s/n 110 came at the 1952 Turin Grand Prix, the year’s first non-championship race, where he netted another podium finish. By the first round of the ’52 World Championship, his home race at Bremgarten, he had upgraded to a works-specification 500 F2.

Following Alfa Romeo’s sudden withdrawal from Grand Prix racing at the end of the ’51 season, the only remaining viable F1 team was Ferrari. To attract more competitors, the World Championship in 1952 and ’53 was run to 2-liter Formula 2 rules. While this did bring in new teams, Ferrari, with its years of experience running the 166 F2, utterly dominated both seasons. Fischer was part of that success, finishing second behind Ascari in the ’52 Swiss GP.

S/n 110 was also entered in the race, by Fischer’s Ecurie Espadon stablemate Peter Hirt. Hirt finished seventh, a full six laps behind Fischer, then drove the Ferrari in its final race, the 1952 British GP. 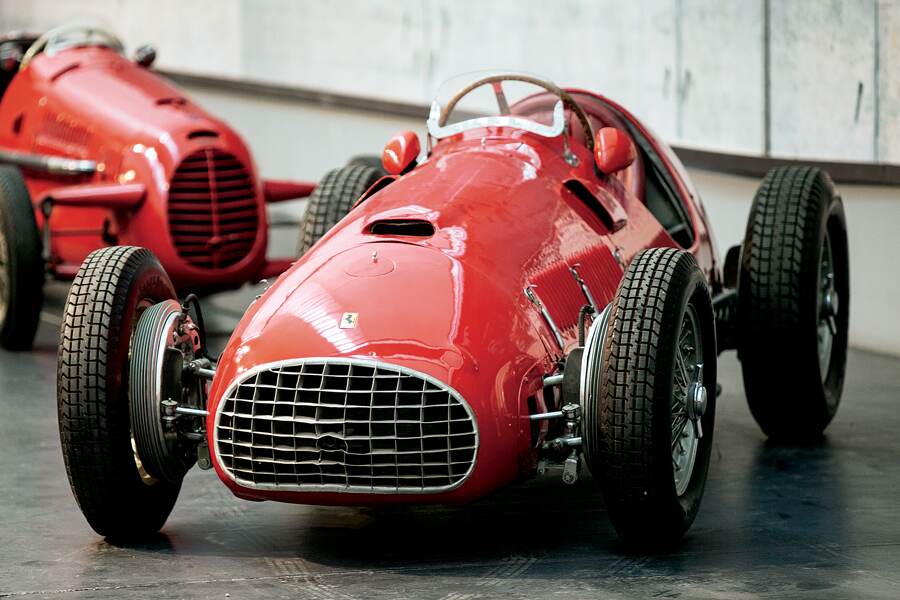 It was the anniversary of the Scuderia’s first World Championship win, but whereas José Froilán González had been a shock victor in ’51, beating the all-conquering supercharged Alfa Romeos, race-winner Ascari led every lap. Hirt, on the other hand, didn’t fare too well, though. After qualifying 24th out of 32 starters, he retired on the fourth lap with a brake problem.

Historical records on this car are extremely rare, but it’s clear a 2.5-liter car shouldn’t have been allowed to run in points-paying Grands Prix. After much searching, I did find a single reference to the Ferrari having been fitted with a 1.5-liter V12 for these races, but, if that’s the case, all particulars have been lost.

What is known is that, in mid-1952, the Ferrari was bought by Schlumpf, who added it to his collection. It has since remained there, untouched by a wrench, for the last 65 years. 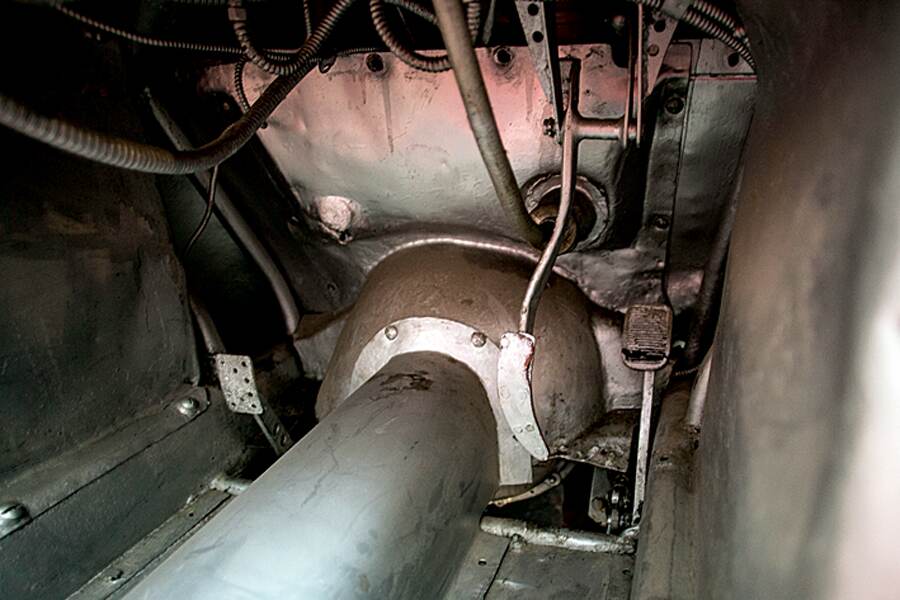 S/N 110 HAS BEEN CLASSIFIED as a national treasure since 1982, so even if the engine could be started there’s no way I would get a test drive…not that I could squeeze my size 12s into the gap between the huge wooden steering wheel and the side of the tub in order to slide my legs inside, let alone manipulate the butter knife-sized brake pedal, which is curved so that it fits against the back of the gearbox’s bell housing. Clearly, Rudi Fischer, like most racing drivers, was very small. So, I have to content myself with looking.

With his dapper suit and white gloves, Richard Keller, the museum’s Collection Director, looks like a grand orchestra conductor as he undoes the stiff clips that hold the louvered engine cover in place. While the V12 hasn’t made music for more than six decades, it’s still a visual work of art.

No one who prepared or raced this Ferrari remains alive today, so the only place to get a feel for the Ferrari in grainy YouTube videos, which show it powersliding around tracks that, today, we’d consider dangerous to ride a bike around. Standing next to the car, it’s fascinating to imagine what the mentality of the men who raced these things. With drum brakes, no concept of aerodynamics, humorously skinny and treaded tires, driving this Ferrari must have like trying to drift a 150-mph soapbox between the trees and park benches. 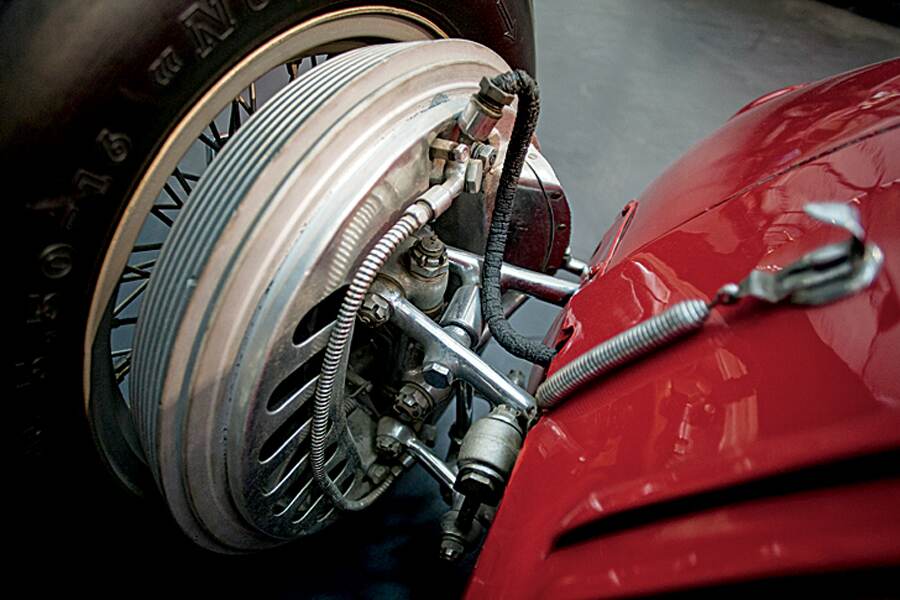 It gets worse. The steering column runs from the front-most corner of the engine bay, across the top of the engine to directly in front of the driver, ready to be rammed backward even a minor front-end impact. There’s no roll hoop, but who needs one when there isn’t a seat belt? The sides of the tub are cut down to almost hip level so pretty much the only thing, stopping drivers sliding out around fast corners would be hanging on to the steering wheel—and in period photos, you can see the drivers leaning into the turns. Never mind the fact the circuits the Ferrari raced on in period were lined with hedges, dirt banks, and straw bales at best, concrete walls, houses, and trees at worst.

Happily, this Ferrari (and, in period, its drivers) survived the dangers. And today, it’s a precious time capsule that offers a fascinating insight back to the earliest years of Ferrari. 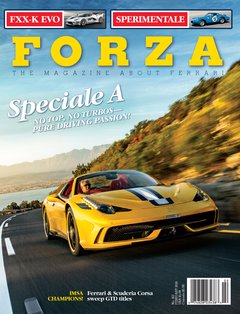