A Vietnamese emperor and a French textile magnate created and preserved this unique Ferrari. 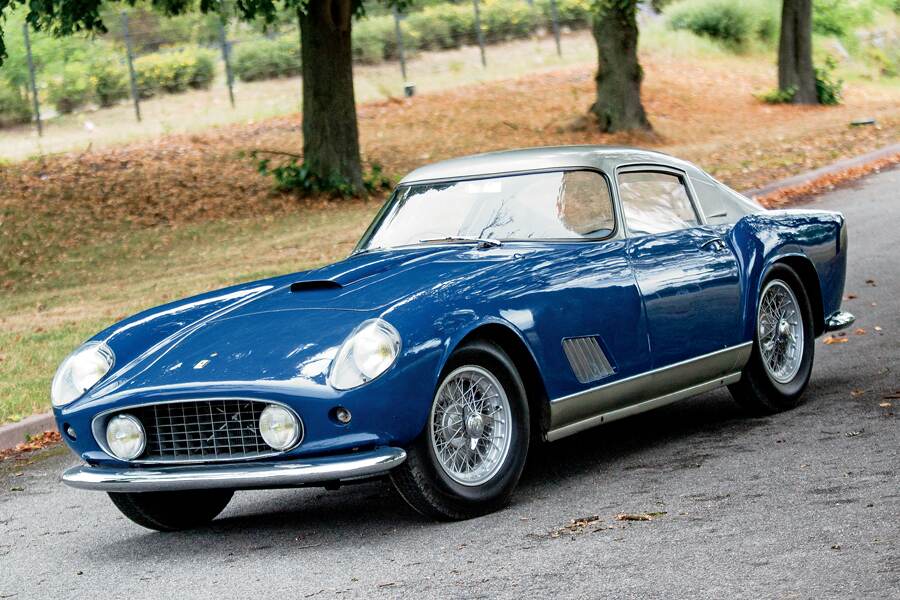 Story and Photos by Robb Pritchard

Even the most die-hard car lover can suffer sensory overload during a walk around the massive Cite de l’Automobile museum in Mulhouse, France. From early steam-powered carriages to modern Le Mans machinery, the world’s biggest collection of Bugattis, dozens of Formula 1 cars, and plenty of weird and wonderful creations from over 130 years of motoring, the fabled Schlumpf Collection provides the bulk of the machinery found in the world’s most well-endowed car museum.

With so many automotive gems to see and appreciate, you’d be forgiven for only casting a cursory glance at the blue and grey Ferrari 250 GT Tour de France (s/n 0450AM) in the middle of the largest hall, parked between a 250 MM Spyder (s/n 0230MM) first owned by film director Roberto Rossellini and a wedge-nosed 1960 Vuillet Coupe. The scant few words on the TdF’s information plaque don’t reveal much of the car’s fascinatingly convoluted history, which is likely why its story has never been told in a magazine—until now.

In reality, this isn’t a story about a car, but one about two men. The first is Fritz Schlumpf, the collection’s creator. The second is s/n 0450’s original owner: Prince Nguyen Vinh Thuy, the 13th and last Emperor of the Nguyen dynasty of the Kingdom of Annam. 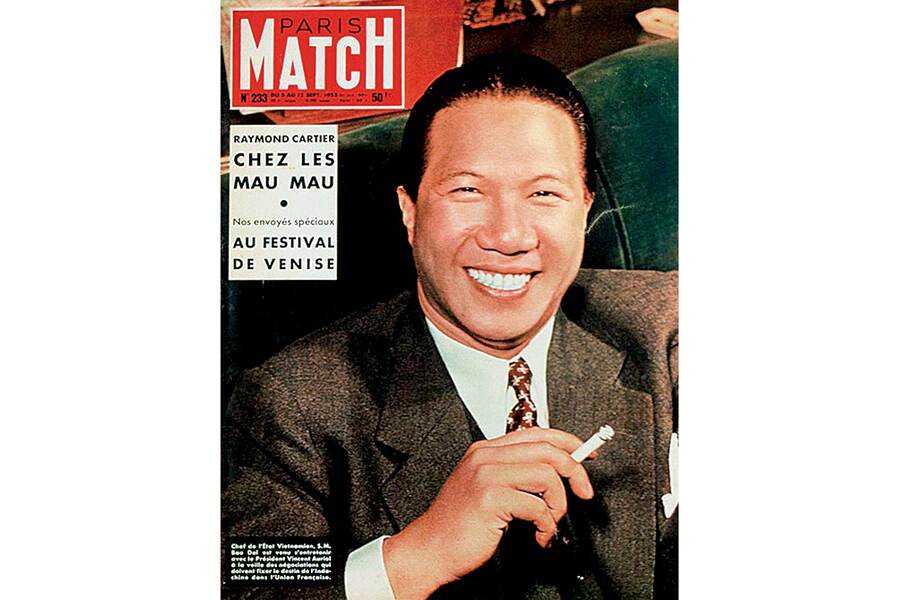 BORN IN 1913 into a life of wealth and privilege, Prince Thuy, better known as Bao Dai, became Emperor at the tender and not particularly world-wise age of 12. Unfortunately for him, the 20th century was a very tumultuous time for the Indochina region, and Annam, the central part of what is now Vietnam, was first taken over by French colonialists, invaded by the Japanese in World War II, then subject to a postwar Communist uprising that eventually led to American intervention in the 1960s.

Bao Dai didn’t rise to the occasion as a champion of the people. Instead, he’s famous for almost single-handedly wiping out the country’s tiger population and for popping out to buy the world’s most expensive Rolex watch while in the middle of negotiations that would split his country into North and South. Bao Dai was then exiled in 1955, when a referendum abolished the monarchy, and lived most of the rest of his life in France. After he died in 1997, the New York Times wrote, “He played almost no role in his homeland thereafter, choosing instead a hedonistic life in Paris and along the Riviera that centered around golf, bridge tournaments, and women.”

In Vietnamese, Bao Dai means “Keeper of Greatness,” and while many of his former subjects would likely not agree with that accolade, he did have good taste in Ferraris. 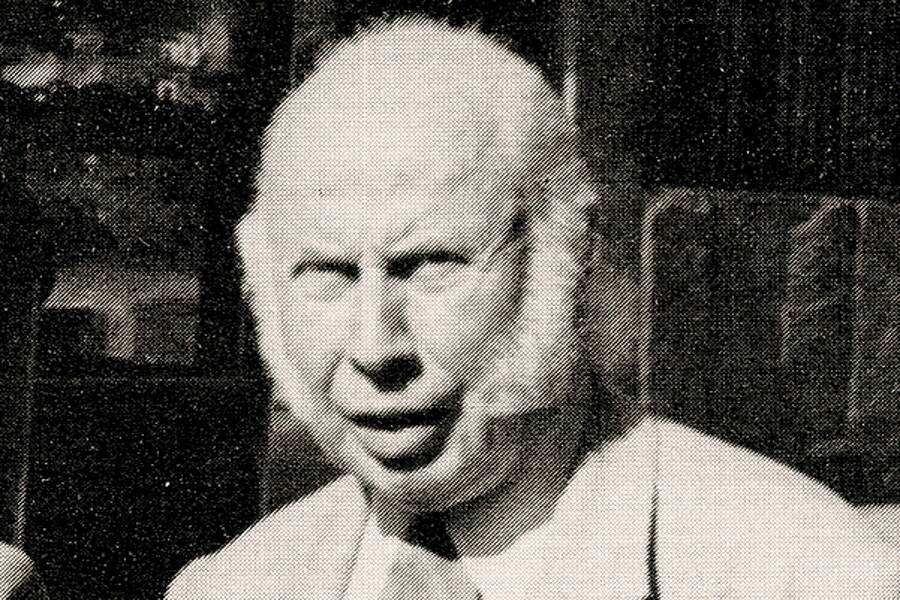 In the hands of the great Finnish racing driver Curt Lincoln, s/n 0723 won five races, mostly in Sweden between 1957 and ’59, but the car caught fire in 1960. S/n 0450’s hood is therefore a replacement, and its fenders needed to be heavily repaired, but the end result, which included the TdF’s dashboard, looks fantastic. It’s not known who performed the work, but for a somewhat budget-conscious ex-emperor the conversion would have been much cheaper than buying a new Ferrari.

Bao Dai had his rebodied Ferrari painted blue, the imperial colors of Annam, and, on the hood above the Prancing Horse badge, placed an emblem featuring a hand-painted coiled dragon of the Imperial Order of the Dragon of Annam. Despite all the work it took to get the car just how a possibly home-sick Bao Dai wanted it, he didn’t get to keep it for long. With no real income, he needed to sell off some assets to maintain his life style. In 1968, while hunting at a forest reserve owned by Schlumpf, the pair did a deal on s/n 0450. 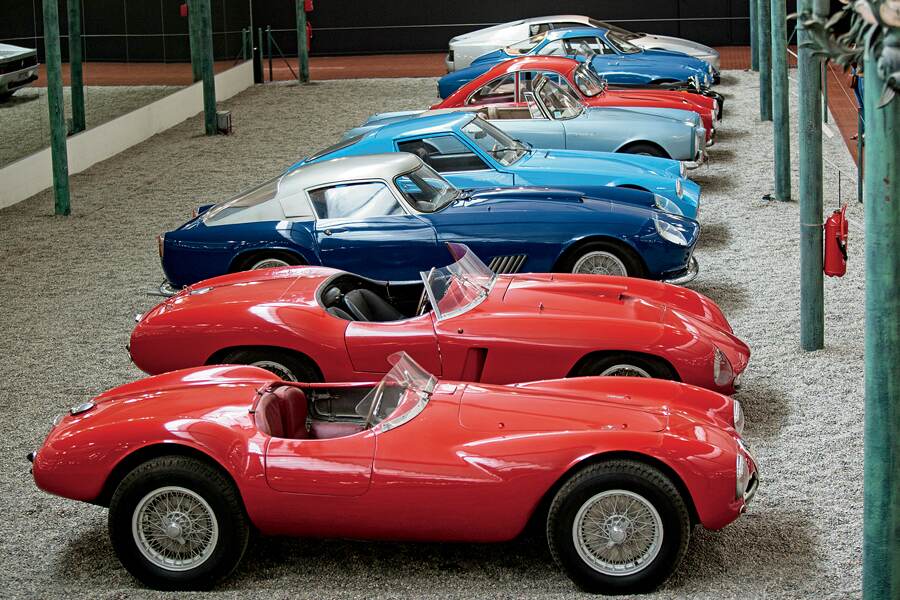 IN THE EARLY YEARS of the 20th century, no one watching the scrawny lad pedal his bike around the cobbled streets of Mulhouse could have imagined that, in just a couple decades, Fritz Schlumpf would be one of the richest men in the country. From selling bundles of wool out of a box on the back of that bike, he ended up owning five huge textile factories around the Alsace region.

Schlumpf’s wealth allowed him to indulge his passion of racing and collecting cars. His first big purchase was a Bugatti Type 35B he used in local hillclimbs before the directors of the national textile union persuaded him to give up such a dangerous hobby. This car now has pride of place in the museum’s first display room, next to a small memorial to his mother, to whom the collection is dedicated.

Schlumpf thought Ettore Bugatti’s rags-to-riches story mirrored his own life, so those French sports cars were his first love—so much so that, when Bugatti was struggling financially in 1963, he attempted to buy the company. Schlumpf was turned down in favor of Hispano-Suiza, yet such was his obsession with the marque that he wrote to every single member of the Bugatti owner’s club and offered to buy their cars. One American collector had 30 examples, and Schlumpf bought them all. Eventually, he owned well over 100 Bugattis. 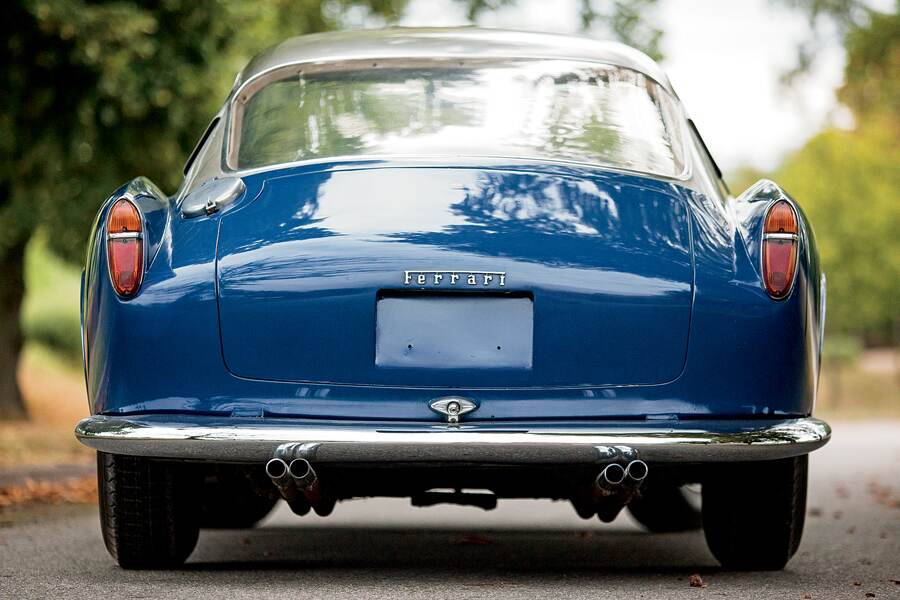 At the same time, numerous F1 and F2 cars, Le Mans Panhards, rare French models such as Darracq, Clement-DeDion, Serpollet, and George Richard came through his workshop. There, they were restored then wheeled out for permanent display in a 150,000-square-foot wool-making factory, which was eventually filled completely. At its height in the late 1970s, Schlumpf’s personal collection approached 500 cars. However, they were kept in secret and only seen by a select handful of close acquaintances.

The ’70s also saw cheap imports from Asia flood the market, knocking the bottom out of the European textile industry. In a few short years, Schlumpf’s company went from being one of the biggest of its kind to having serious financial difficulties. Then, in an odd twist, it was discovered Schlumpf had fallen foul of an obscure law, dating back to Napoleonic times, that stated factories in the eastern Alsace couldn’t be used to make personal profit. In the bankruptcy proceedings that followed (!), the cars were seized as part of the company’s assets.

It turned out the expected gain from selling off all the cars wouldn’t be enough to settle the company’s debts, at which point Jean Panhard, president of several automotive associations including the committee of French auto manufacturers and the Automobile Club of France, along with the City of Mulhouse, stepped in and arranged to buy the collection on behalf of the French people. In 1982, the Cite de l’Automobile was opened to the public. 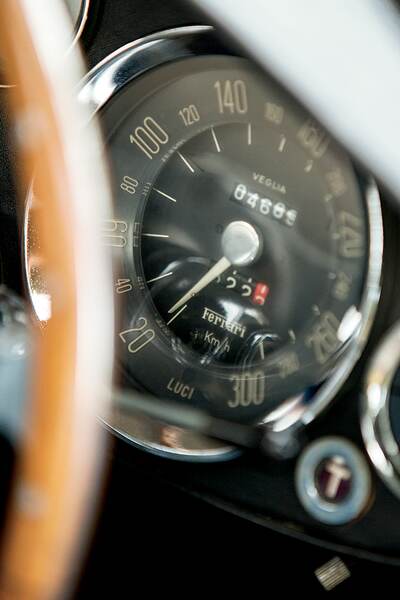 TODAY, THE MUSEUM BOASTS an incredible 600 examples of the best and rarest European cars, including 11 Ferraris. In a row which begins with a Testarossa and ends with a Mercedes-Benz 300 SL Gullwing, s/n 0450 has sat in the same place since Schlumpf acquired it, quietly appreciated by generations of visitors.

The engine hasn’t been started for approximately 55 years, since Bobby Goldsboro’s “Honey” was number one, so I won’t be driving the car. Actually, since the seats are covered in a protective grease, and since anything on the bottom of my shoes could introduce unwelcome visitors to the carpet and upholstery, I won’t be sitting in it, either. (Like s/n 0450, s/n 0723 was right-hand drive, possibly because the Swedes drove on the left side of the road until 1967.) But just for FORZA, and for FORZA alone, I was able to have the Ferrari pushed outside for its first dose of natural light in 35 years.

The car’s hood is secured by a couple of old leather straps that are dry and stiff with age, so it takes a while to work the retainer springs loose. It’s worth the effort: Underneath sits a glorious 4.9-liter V12, possibly the only one to be found under a 250 GT hood. The odometer shows 4,689 kilometers, which could be what the Swedish racing team put on the TdF’s original 3-liter engine, but no one knows what the Superamerica engine’s true mileage is. 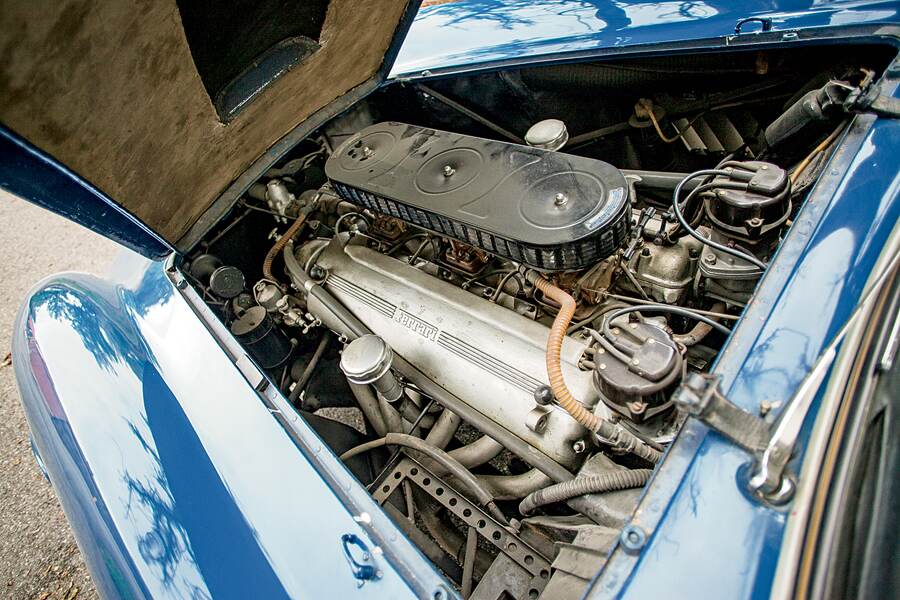 It’s a pity the V12 can’t be fired up, but keeping 600 cars running is far more difficult than simply displaying them. In fact, the museum does keep 100 cars maintained in road-worthy condition, but since there’s already a 250 GT in that group, the chances of this one ever being resuscitated seem sadly small.

To my surprise, I spot a few tiny imperfections in the car’s paint. It turns out the museum didn’t have heating or air conditioning until the mid-1980s, so temperatures inside ranged from as low as 5°F in the winter to 85°F or higher in the summer. These fluctuations weren’t too healthy for non-factory paint, although these blemishes are too slight for my camera to capture.

Although s/n 0450’s story is fascinating, there’s something distinctively melancholy about a Ferrari that is never driven, particularly such a unique example. I feel a bit guilty as I walk off, leaving it unattended at the back of the museum for people on the passing trams to stare at. On the other hand, the Ferrari’s rags-to-riches-and-back story mirrors that of the man who kept it safe for more than 50 years. 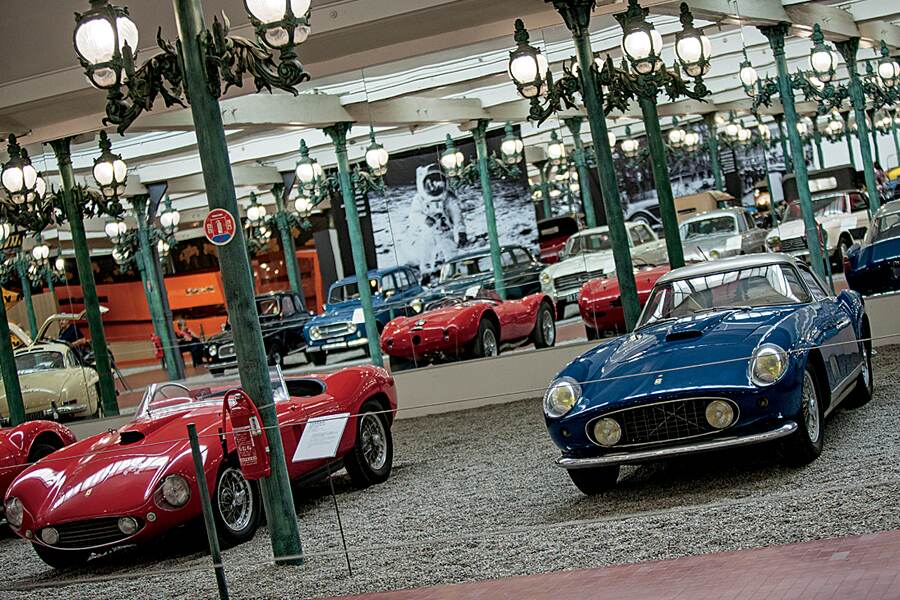 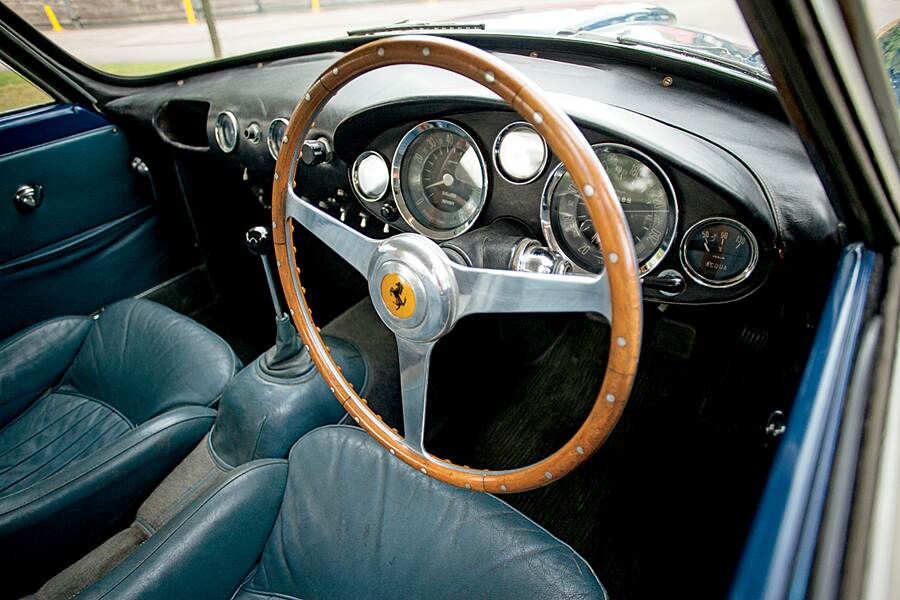 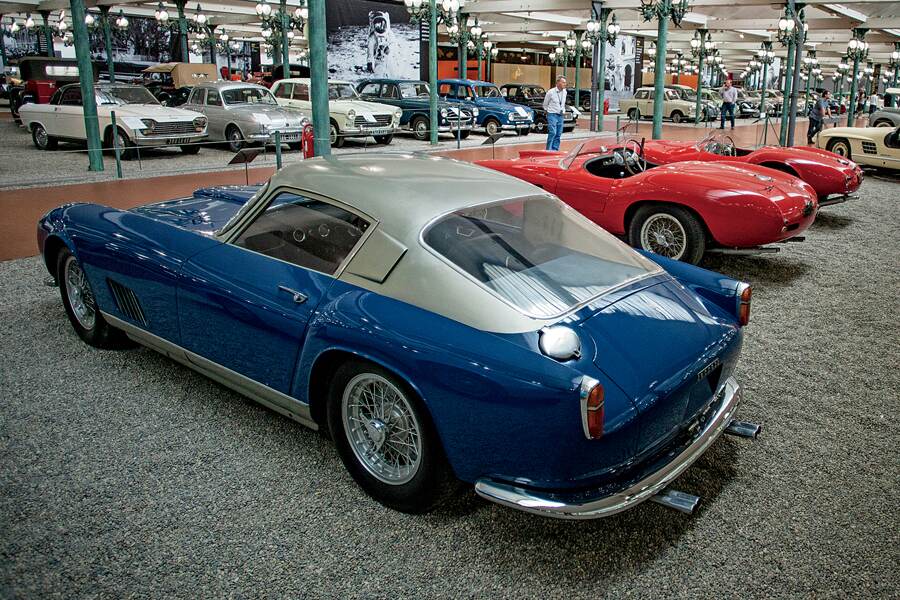 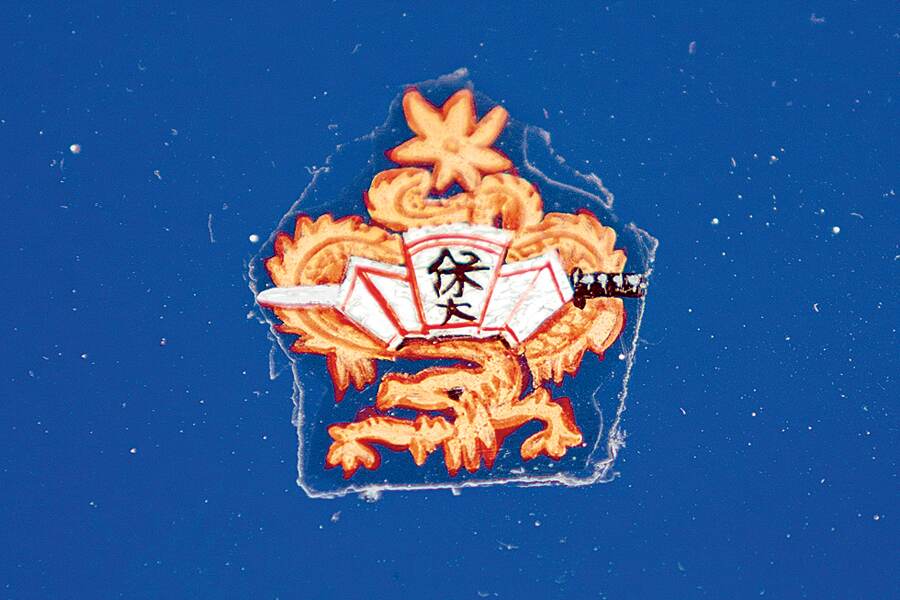 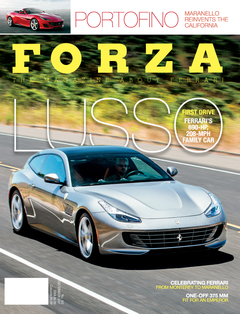