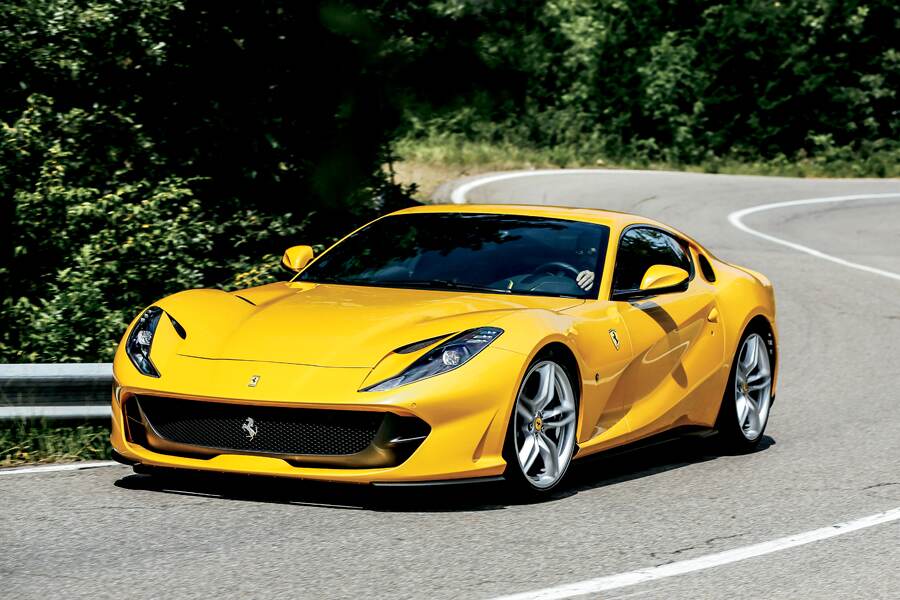 There is a road that every new Ferrari visits. It’s about 45 minutes from Maranello, and has no outward significance other than it is tight, twisty, broken in places, and that every time a new production car is launched from the factory gates the lucky assembled journalists immediately head for it.

Each visit includes a degree of anxious anticipation, but on this occasion the fear factor has been kicked up a notch. Why? Because we’re here in the 812 Superfast, the most powerful series-production Ferrari ever made, and while it is layered with the serious tech that every modern Maranello product enjoys, it still puts 800 horsepower through just two wheels. There’s no hiding place here.

Not that we’re grumbling, of course. The path to the factory gates is well-worn but no less exciting for that, and while every drive of a Ferrari is special it’s difficult not to be a little pleased that there are no turbochargers awaiting us. As wonderful as the twin-turbo 3.9-liter V8s found in the 488 and California T are, and allowing for the fact that two of Ferrari’s greatest-ever road cars—the 288 GTO and F40—featured forced induction, the knowledge that the 812 Superfast effectively uses nothing more than displacement to deliver such apocalyptic power is enough to send the senses into overdrive. 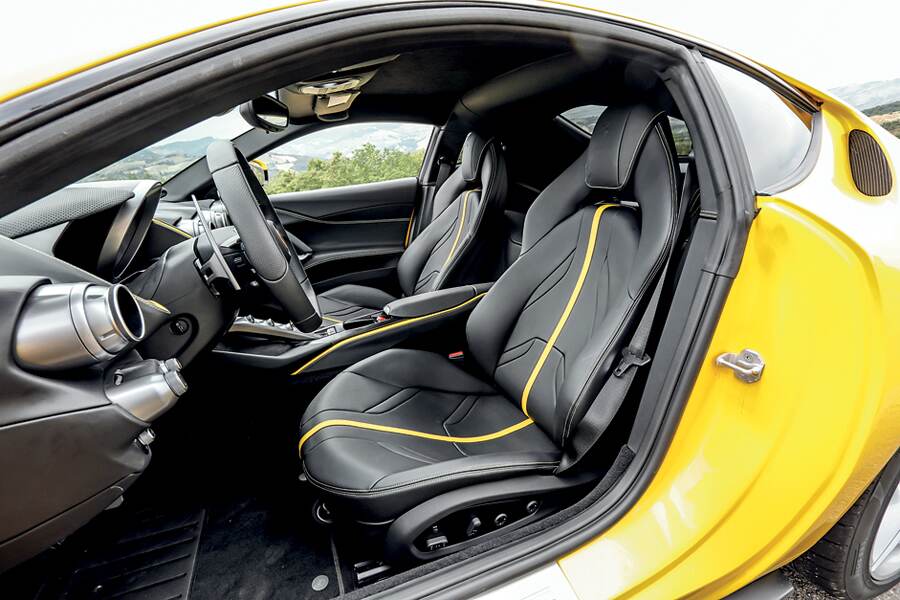 There’s a lot to take in when first examining the 812. In simple terms of proportion it follows the expected direction, with a hood that never ends bleeding into a cabin that bunches up tight against a truncated tail, just as the F12 and 599 GTB did before. It also moves further toward a functional, techno-heavy look than the F12, similar to the transition from 458 to 488. Beauty is in the eye of the person signing the check, but these current models don’t have the instant grace and sweeping curves of their immediate predecessors.

Let your initial reaction settle and start to pore over the details, however, and you begin to appreciate the wind tunnel hours the designers and aerodynamicists put in together so everyone came out smiling. Look closely at that classic shark nose: Behind the visual drama you’ll see F1-aping horizontal and vertical fins leading towards the front fenders, while the top of the hood carries vents that draw air through the engine bay, helping to cool the massive motor. The same subtle aero is evident at the rear, where the haunches’ inlets and outlets suck the back end down but are almost invisible from some angles.

The Superfast pulls off the impressive trick of producing as much downforce as the wild-child F12tdf but with less drag, partly on account of how much work the underbody does. A full 40 percent of the total downforce comes from controlling the air moving underneath the car, while the front and rear diffusers provide active aero with the ability to stall under pre-determined conditions, reducing drag at high speeds. This is a truly modern Ferrari to look at, mixing the expected visual impact with the functional beauty of a car designed to travel at exceptional speed. Arguably no other marque could do it better. 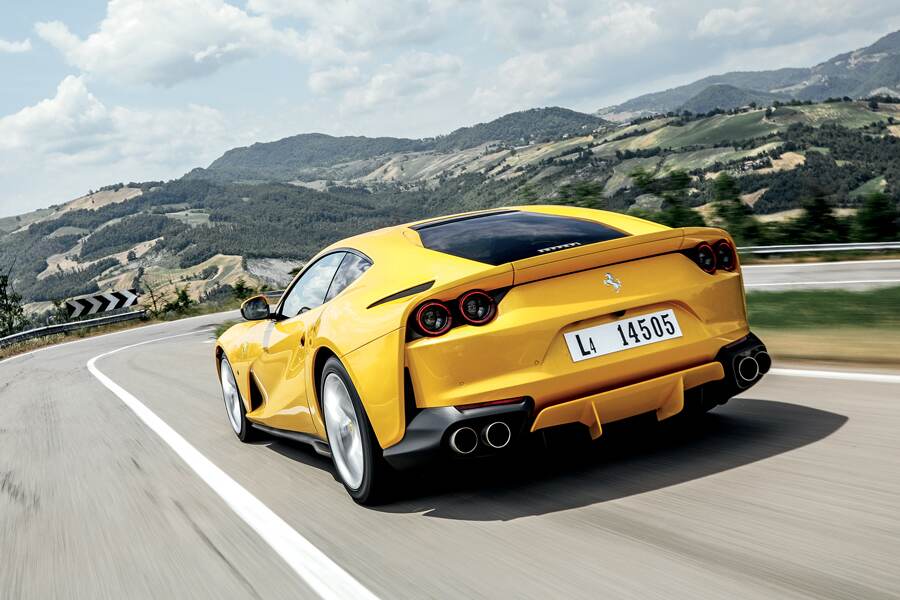 While the cabin might be immediately of secondary importance, it’s worth noting just how capable the 812 is. Whether one or two-up, there is the same spacious but secure feel as in the F12, with thin but comfortable seats, an artfully slim center console with the transmission controls, and the latest-generation infotainment setup partly borrowed from the GTC4Lusso. Anyone familiar with the layout will find it a cinch to take control, while those new to it may need a little time to understand the subdivision of systems.

More important, this is a cabin that’s remarkably easy to live with. It verges on the luxurious, something that’s not to be expected of a car that offers such stellar performance, and the trunk is generous too, with a tough divider that can separate you from your luggage or open up the space for those long-distances trips. On this score, at least, the GT brief has been well and truly covered.

There is more important business to attend to ahead of the driver’s seat, specifically 6,496cc of normally-aspirated V12 siting almost entirely behind the front axle. It’s a development of the same block that powered the Enzo back in 2004, and, having been bored out to its maximum capacity in the F12, gets a longer stroke to reach the full 6.5 liters. Also new are the pick of the innovations that debuted on the F12tdf’s rabid powerplant. A variable-length inlet-tract system, oil-powered for fast action, helps to boost response across the rev range, while the compression ratio and injection pressures are increased—to an incredible 350 bar in the case of fuel. 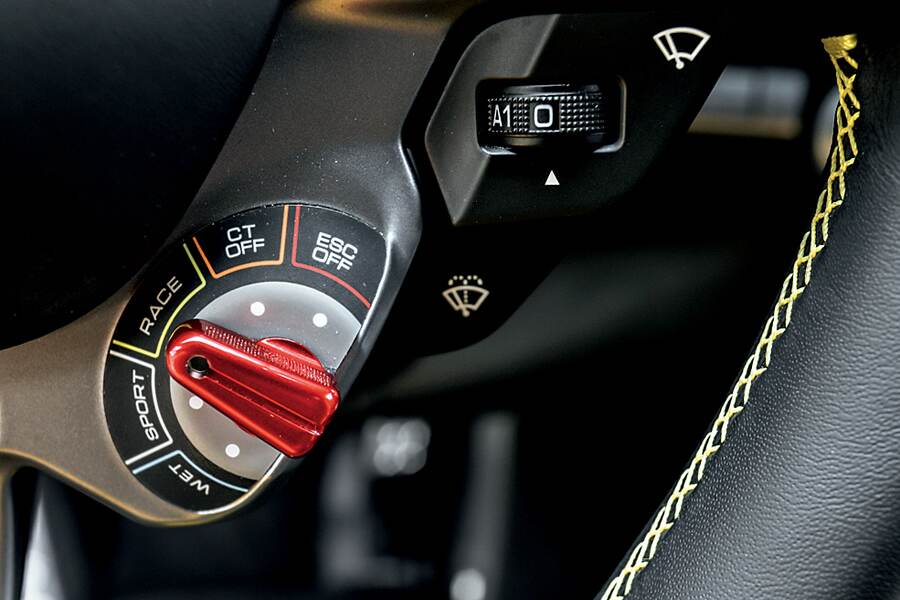 Ferrari has unashamedly chased performance with this latest version of the F140 engine, going as far as shortening the gear ratios of the dual-clutch transmission by an average of 6 percent. There’s no doubt that it has been a worthwhile effort: The headline figure of 800 horsepower arrives with appropriate thunder at 8,500 rpm, and the giant motor will spin on to touch 8,900 rpm before it calls time out. Maximum torque of 529 lb-ft arrives at a heady 7,000 rpm, but 80 percent of that is ready to go from 3,500 rpm.

A BARRAGE OF STATS, graphs, and build-up comes as standard with the press launch of a new Ferrari, but no amount of orchestrated tension can equal the nervous excitement I feel as I prod the starter button for the first time. The result is straight from the Ferrari textbook: A nanosecond of starter motor whirr before the complex roar of the V12 lighting off. There’s an equally brief blare of revs before it settles into a fast idle for a few seconds, then calms to a subdued murmur.

The process of simply getting from A to B is not something the 812 struggles with. Left in the default Auto mode, the gearbox is as seamless as you would expect, and with the manettino in the every-day Sport mode throttle response is keen but not jumpy. There’s no fuss at all; any drama coming from this car is entirely deliberate. 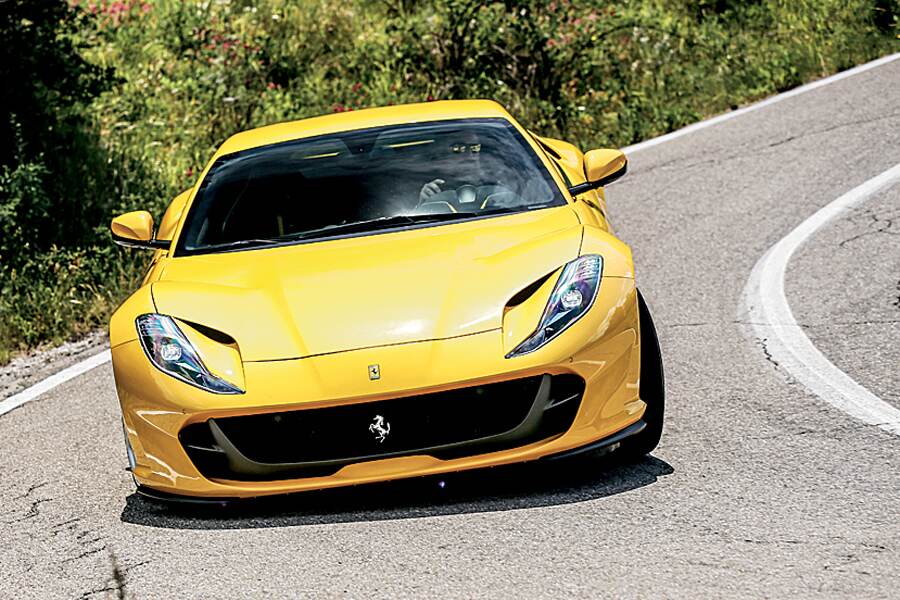 Sport puts the dampers in a fairly soft setting, but even with the “bumpy road” button pushed the Superfast’s ride is a little busy. It picks out smaller marks in the pavement at lower speeds, although not so much you’ll be wishing you took the bus. Things improve as the speed rises, and when cruising along the 812 feels settled, secure, and ready for anything. The V12 fades into the background, and it’s almost possible to forget the potential of the car underneath you.

As you round the first bend of any significance, the steering brings something of a surprise. It is an electrically-assisted system for the first time on a Ferrari, but in some ways it feels remarkably similar to the hydraulic setup of the F12. It remains relatively light (probably more so than you might hope) and isn’t bursting with feel at first. But again, adding speed brings more trust, and you learn to exploit its quick reactions.

Rather than any marginal gains in fuel consumption, however, the electric power steering allowed Ferrari to bring in some new aids to allow the humble driver to access the 812’s huge ability. The accurately-if-numbly-named Ferrari Peak Performance and Ferrari Power Oversteer vary the torque of the steering’s electric motor to guide the driver in making the correct inputs, encouraging him or her to add corrective lock when required. 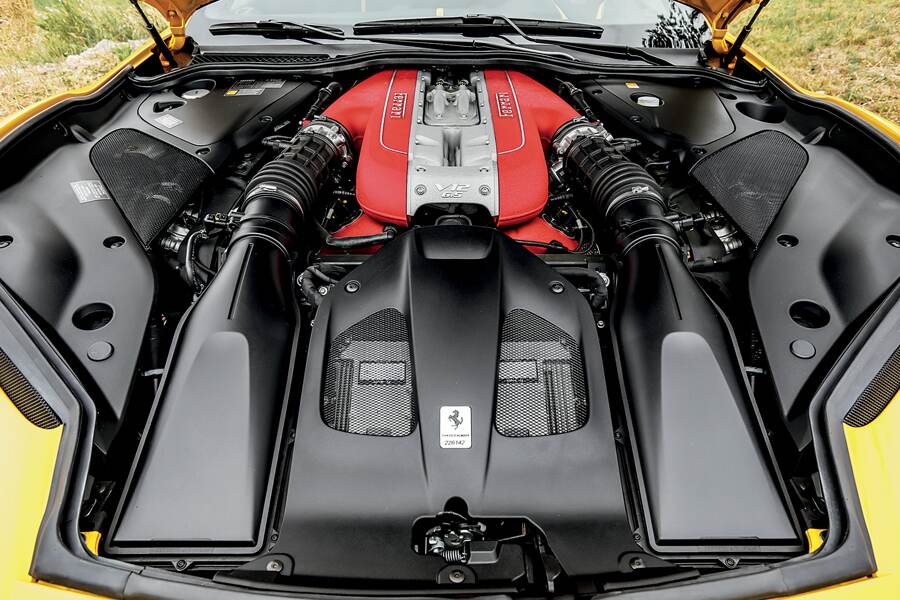 Any thoughts of these being nanny systems you can’t wait to turn off can be dismissed, as both operate so subtly they are almost imperceptible. They only come into effect when the car is near or over the limit of grip, a time when the driver is likely thinking more about what happens next than the notion the car working against him. Maybe the 812 could do without them, but it wouldn’t be nearly so easy to enjoy its power, grip, and balance.

Despite the big figures, you always feel that the 812 is on your side. It even manages to tame the rear-steering Virtual Short Wheelbase system first seen on the F12tdf. There, it made the car super-sharp to turn in, but with an inherent nervousness that chipped away at your confidence. In the Superfast, which retains comparatively broad front tires compared to the rear, instead of nerves you get sharp responses and plenty of reassurance.

There’s no question, though, that the mighty V12 is the headline act. Remarkably docile and easy to modulate at low revs, the glory of this big-capacity, naturally-aspirated engine is how precisely it can be controlled—up to and way past the point where your eyes begin to widen and the scenery starts to blur. Half the thrill comes from knowing how much power is available from every tiny squeeze of the throttle. Select third gear, grit your teeth, and push the accelerator all the way to floor. Before it’s even reached the carpet, the 812 has lunged forward, huge rear tires gripping hard, a manic, orchestral roar erupting from the quad exhausts. 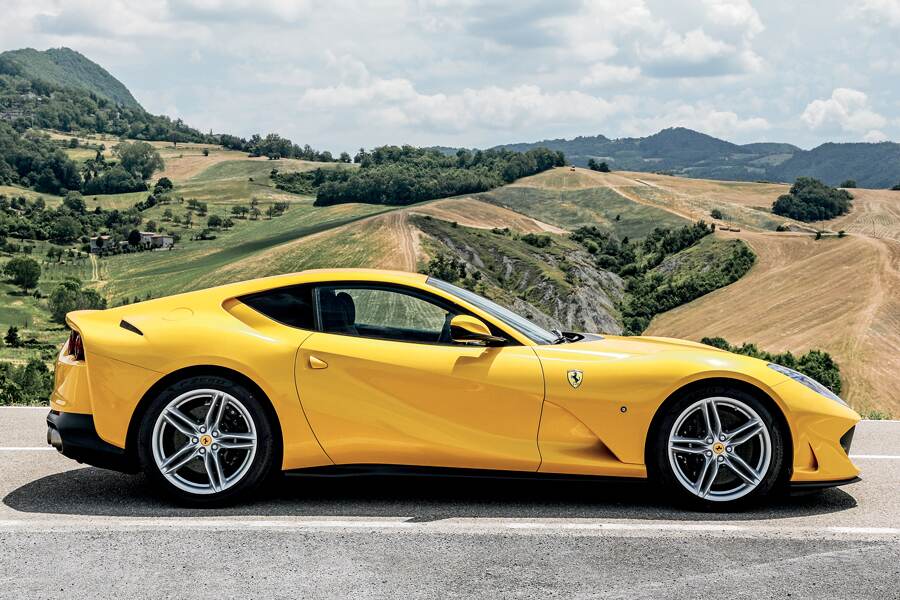 Such are the Ferrari’s reserves of torque that no gear is too high and no speed to low; you’re simply varying how stupidly quick it gathers speed. Touching the 8,900-rpm redline is wholly unnecessary in terms of performance, but you’ll find yourself doing it whenever possible, just to experience such a magnificent piece of machinery pushed to its limit.

On the road, this translates into exploiting every opportunity to exercise the V12, pressing hard into bends, leaning on the fearless brakes that never seem to wilt, and trusting the quick turn-in of the steering will translate into grip at the front end. The 812 will understeer if you try hard enough, but getting to that point requires overcommitment. Drive it like it you own it, and you’ll marvel at how a car this size will dive so readily into a corner.

From that point on, it’s all about how much power you feed in. With the manettino set to CT Off (a.k.a. no traction control), the Ferrari will allow some oversteer—if you get there the right way. Be too brutal with the throttle and it will rein in the power and prevent the slide; build cornering speeds more gradually and there’s enough oversteer to please the most tail-happy of owners, all with the comfort of knowing a digital guardian is ready to step in. A system that allows sizeable drift angles in fourth gear at 100 mph on the Fiorano test track seems calibrated to suit 99 percent or more of potential owners. 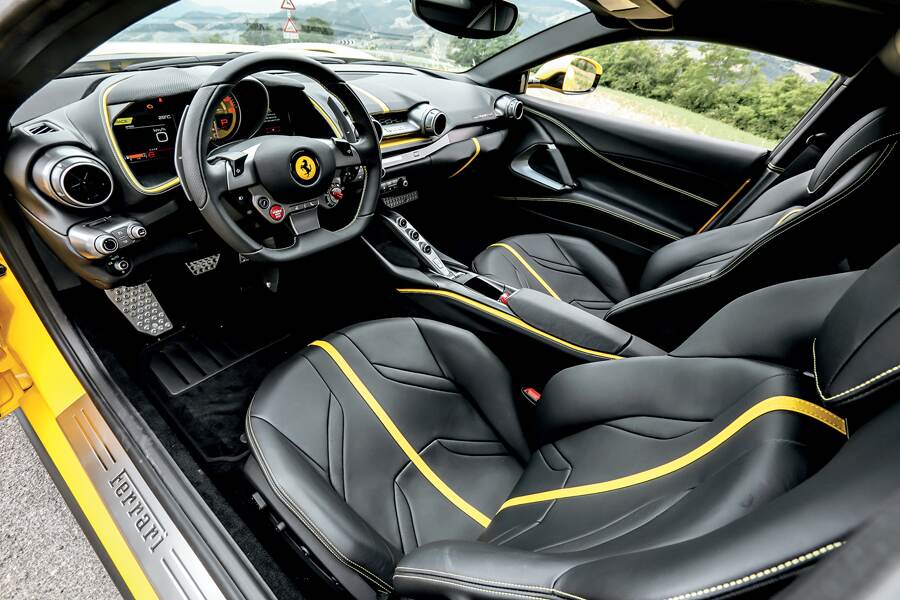 Only a fool would have predicted the 812 Superfast wouldn’t be a step forward from the F12, but Ferrari has introduced improvements both where they were needed and where they were not. The V12 is simultaneously more incredible and more docile than before, while the 812’s cabin is both easier to live with and a little more relaxed for long-distance travel. The biggest improvement, however, is in its handling; the Superfast raises the limits and makes it easier for the driver to get there. Don’t fear that this is some sanitized supercar that anyone can drive; you can still get yourself into plenty of trouble if you really try. But Ferrari’s genius is how the 812 Superfast lets you enjoy so much of that 800 hp so much of the time. Frankly, if you don’t come away feeling like a hero, it’s your own fault! 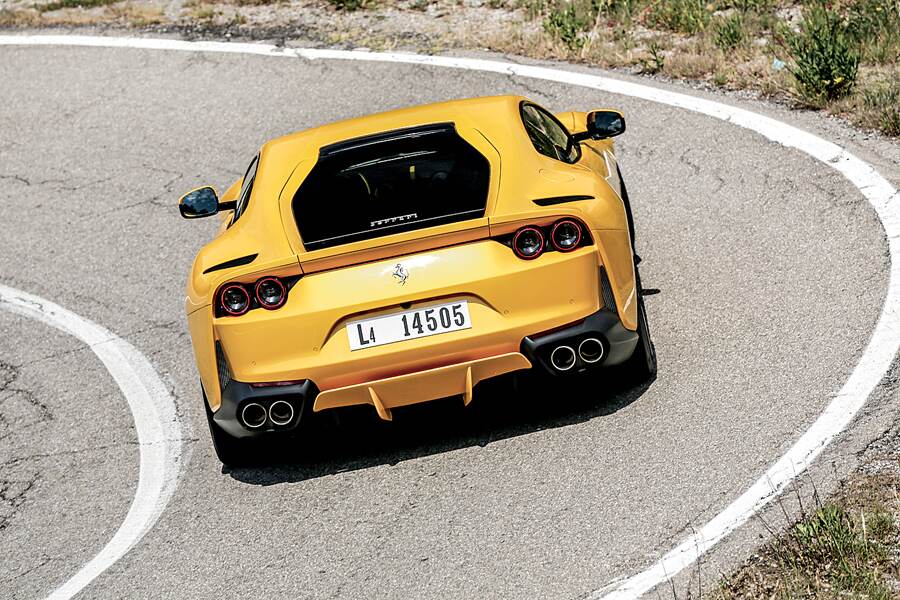 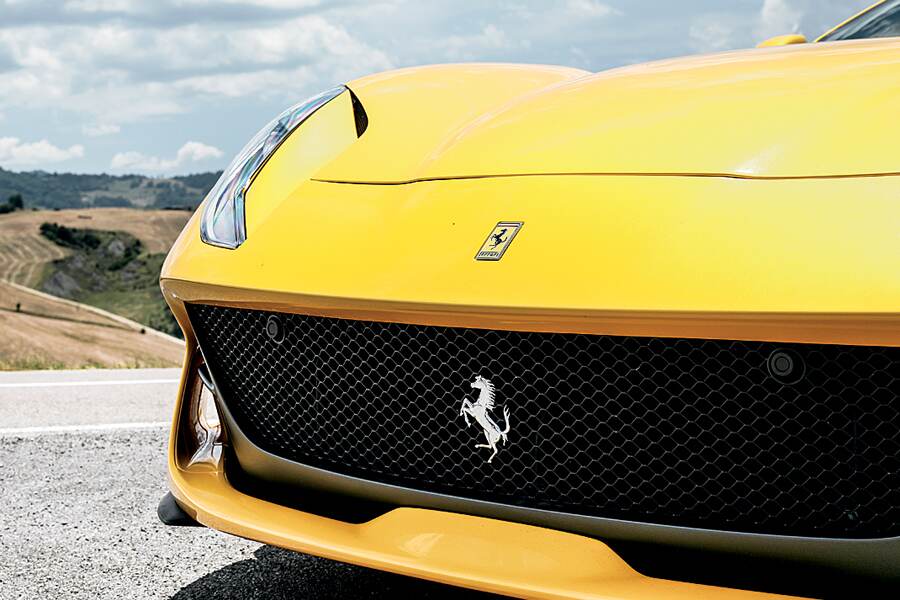 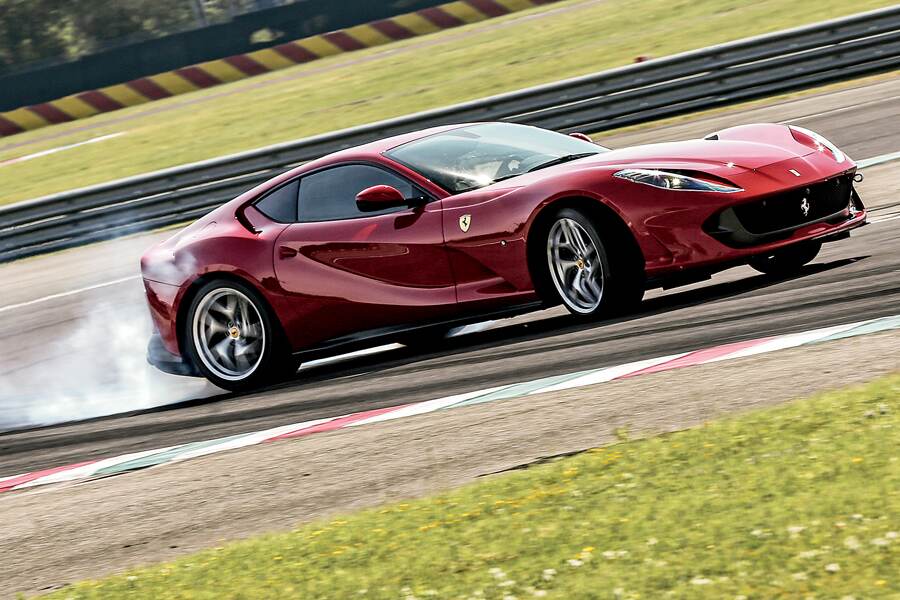 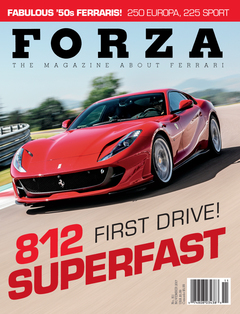