Sergio Pininfarina bought this 330 GTC to use as a test bed for new ideas. 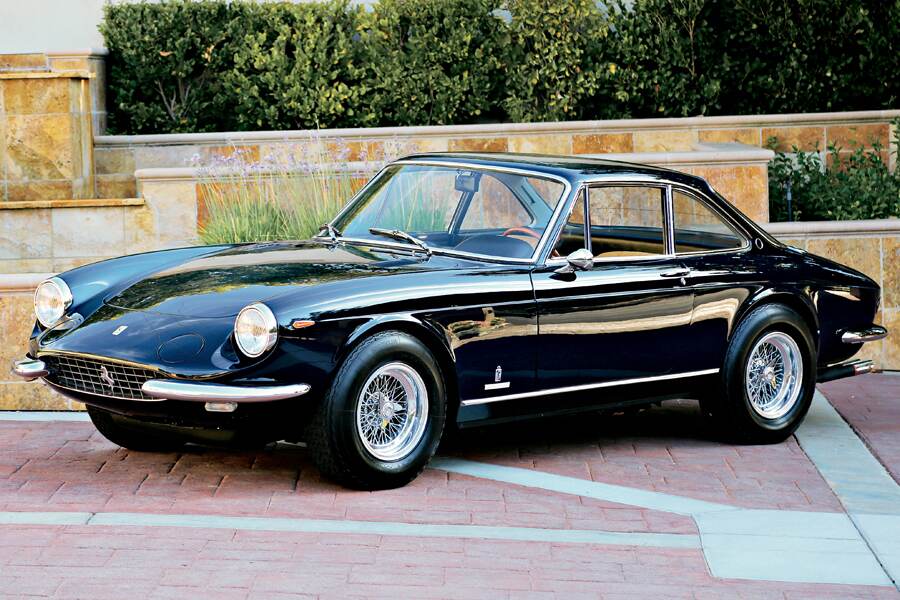 The 1960s were a decade of great creativity for automobile designers worldwide. At a time when few safety restrictions were imposed and pollution-control regulations were in their infancy, designers still enjoyed free rein and created some of the most beautiful cars ever seen—before or since.

That was certainly the case in Italy, particularly at Carrozzeria Pininfarina in Turin. In 1961, company founder Battista Pininfarina retired and handed over the business to his only son, Sergio, then 35 years old. Although Sergio, an engineer who had joined the company in 1950, had served as the liaison between his father’s company and Ferrari for nearly a decade, his own early attempts at car design did not go so smoothly. He had been given the task of designing a one-off Ferrari for none other than Giovanni “Gianni” Agnelli, the head of FIAT, and the outcome was less than satisfactory. In fact, after Agnelli’s 400 Superamerica was shown at the 1959 Turin Auto Show, the new owner returned the car to Pininfarina for body modifications. Battista was furious with his son, and Sergio was left waiting for a new opportunity to prove his talent.

That chance came a few years later, when Enzo Ferrari decided to create a new model that would fit between the sporting 275 GTB and the touring-oriented 330 GT 2+2. The 330 GTC would utilize the chassis of the former and the engine of the latter, and promised a comfortable yet still sporty two-seat experience. Working with his brother in-law Renzo Carli, also an engineer, Sergio came up with a pleasing design that incorporated many successful elements from designs past. The new model borrowed the tail of the 275 GTS in its entirety, a nose modeled on that of the 500 Superfast, and front fenders lifted from the 330 GT 2+2. The resulting 330 GTC exuded elegance, courtesy of that magic only the Italians seem to possess. 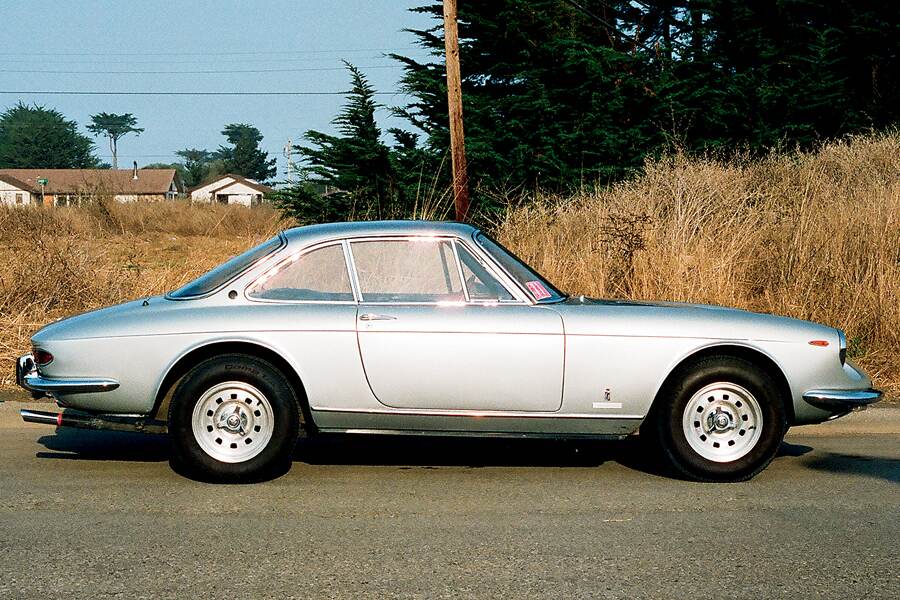 While doing research for my new book on the 330 GTC, to be released later this year, I came across this unique specimen. Pininfarina, pleased by his success, acquired our featured car (s/n 8727, the fourth example made, hence the Pininfarina construction number CO 004) from Ferrari in order to continue development of the model, and, with luck, extend the production of bodies his firm was supplying.

PININFARINA’S INTERIOR CHANGES were aimed at making s/n 8727 more comfortable. Instead of the usual leather, Sergio covered the seats in cloth, which is softer and, during Italy’s hot summers, cooler to sit on. That material, which later became an option on the production 330 GTC, was most likely obtained from longtime customer Peugeot, as the two companies enjoyed a long and fruitful working relationship. (Enzo Ferrari also used cloth obtained from Peugeot to upholster one of his personal cars.) A light blue cloth was chosen to match the dark Blu Scuro exterior paint, a personal favorite of Sergio’s.

S/n 8727’s windshield air vents were modified so that two circular outlets were now positioned on top of the dashboard. Air could be directed efficiently to any location as needed, and the new design would be used on the 330’s replacement, the 365 GTC. 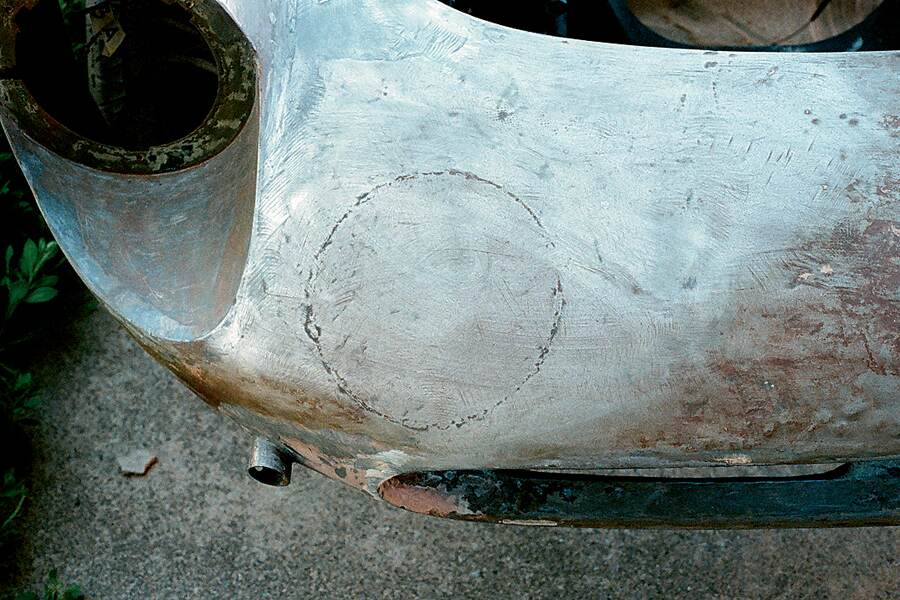 Pininfarina also developed a new way to open and close the vent windows. Round knobs had been used on previous models, but they were awkward to operate, so were replaced with a simple lever. Unfortunately, the new system’s complicated internal mechanism was considerably more expensive to manufacture and complicated to install, so never went into production.

A new lock was installed below the passenger door’s inside handle. When rotated into position, it would block the handle from moving, and the door would consequently not open. The lock would keep a child from accidentally opening the door and falling out, or prevent someone outside the car from opening the door. This lock mechanism later made its way onto production 330 GTCs.

Also adopted for production, on the 365 GTC, were s/n 8727’s dual heater levers, which controlled the cabin temperatures of the left and right sides separately. The 330 GTC only had one. The grab handle over the passenger door was not fitted but kept in production cars. A different type of clothes hooks was installed but later Pininfarina reverted back to the former type. Also, the luggage straps behind the seats were removed. 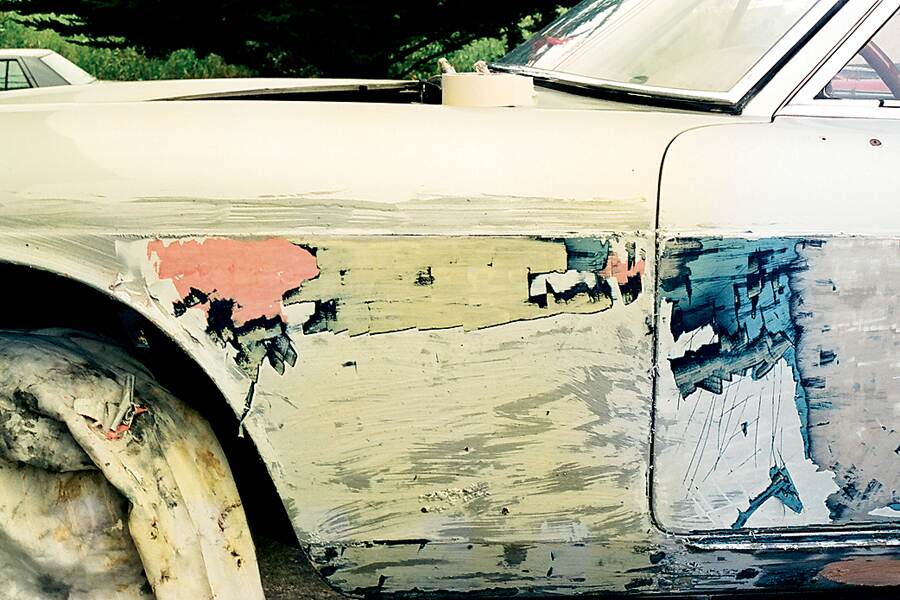 Not all of s/n 8727’s changes appeared in later Ferraris. For example, this 330 GTC received a different steering wheel and hub that did not make it into production. An unusual ashtray recessed in the console and unique window switches were tried but did not find favor with Ferrari, nor did any of the other small cosmetic changes made to the dash and interior.

On the outside, Pininfarina removed the 330 GTC’s fender vents, a legacy of the 330 GT 2+2, replacing them with vents placed on the hood at the base of the windshield. While visually not as pleasing, this arrangement proved to be more efficient at extracting hot air from the engine bay. As a result, the new vents were chosen for the 365 GTC and the 365 GT 2+2.

S/n 8727’s front badge was counter sunk into the nose, rather than simply being mounted flush on top of the sheet metal. This attractive update would have required another step in manufacturing, which would in turn have added cost, and so was dropped. Also dropped was the trunk-mounted “330” badge; the production GTC had been the only model to feature such a numerical legend, and the later 365 GTC never had one. 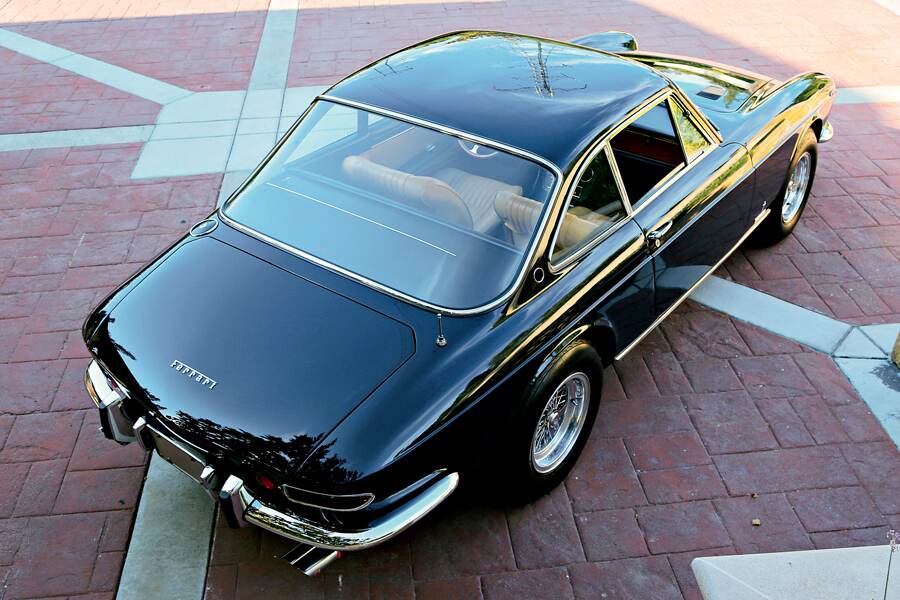 The most striking visual change made to s/n 8727 came in the form of pop-up headlights installed on the nose. Called “Supervis” (short for super vision), these lights were intended to improve the driver’s visibility at night and in inclement weather. They hid under circular covers and, upon activation by the driver, would rotate into position.

The Supervis lights were originally developed for the Ferrari Superfast I drawn by Aldo Brovarone, whose designs were also the inspiration for the 330 GTC. The lights later appeared on two of the four 330 GTC Speciales, as well as a few production GTCs upon customer request, but then quietly disappeared, never to be offered again. When raised, the lights transform the look of the car, adding bulk to its fine nose. The cost to manufacture and install the Supervis setup likely dissuaded Ferrari from offering them as standard fitment.

Pininfarina made no mechanical changes to this car; all of his efforts were focused on the body and interior. Then, soon after all the modifications he intended to make were realized and proven, he sold it. 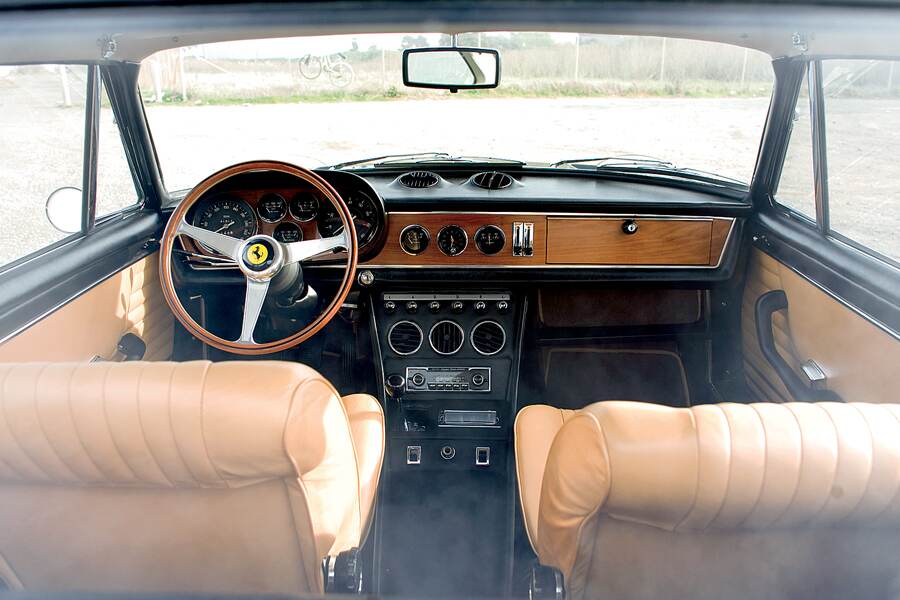 BY THE MID-1970S, like many other Ferraris in those days, s/n 8727 sailed to the New World, where it traded hands a few times. In the early ’80s, it was bought by two San Francisco car enthusiasts, who formed a partnership to return the 330 to its original glory.

After acquiring s/n 8727, one of the partners noticed the car, then painted silver with a black interior, had some very unusual features. Researching the serial number revealed, to their amazement, that this had been Sergio Pininfarina’s personal car, a belief confirmed by the company.

In 1988, when the body man responsible for fixing the car’s nose from a previous mishap discovered two round plugs welded in, they contacted Pininfarina again to inquire about the Ferrari’s original configuration. The design house responded with a description of the changes that had been made to the car in period, including the cloth interior, which the partners had already seen a photograph of in a book. 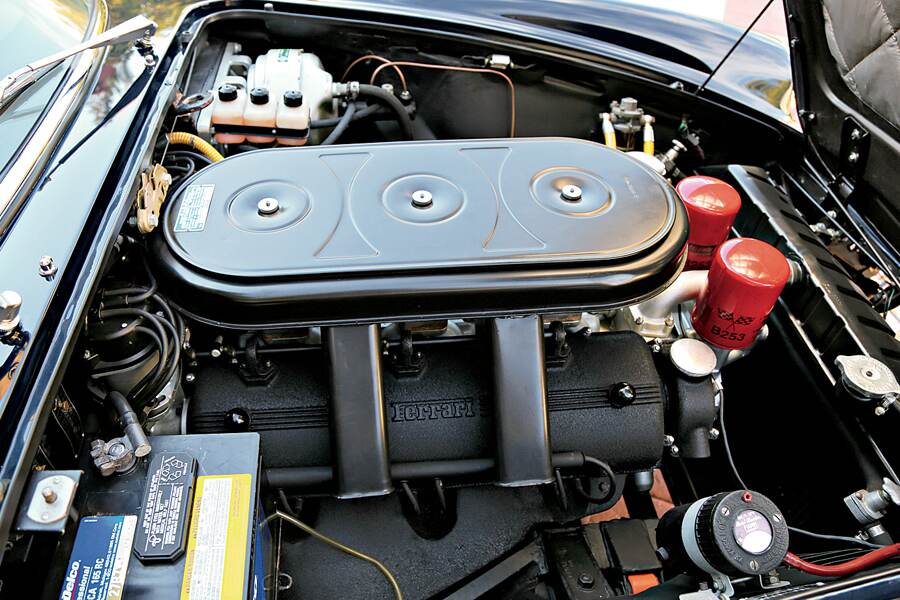 A repainted s/n 8727 was up and running, with a freshly rebuilt engine and transmission but no interior, by early 1996, when the partners were assigned to jobs overseas. They parked the car indoors and postponed completing the restoration for more than three years. When they returned from their foreign assignments in mid-1999, they decided it was time to complete the restoration.

S/n 8727’s pop-up headlights were long gone, and the partners had gotten no information from Pininfarina about the system. Fortunately, their fabricator worked for a client who owned a 365 California (one of the 14 made), which used the same headlights, and that client was willing to lend him the car in order to copy the pop-up mechanism. Alas, after considerable effort had already gone into sorting the car’s nose, the fabricator discovered the original metal was too tired to carry the weight of the new lights and actuators, the latter having been hand-made from scratch. A new nose had to be fashioned, and after a long, arduous, and very expensive process, s/n 8727 had its pop-up headlights back.

While Pininfarina had supplied the paint code for the Ferrari’s original blue hue, the partners faced a dilemma about the interior. While they knew the seats had originally been upholstered in cloth, how would they identify the right material and where would they locate it? Just as perplexing, would enthusiasts and potential buyers really accept this unique car had been “downgraded” to cloth even though leather was standard on the production version? 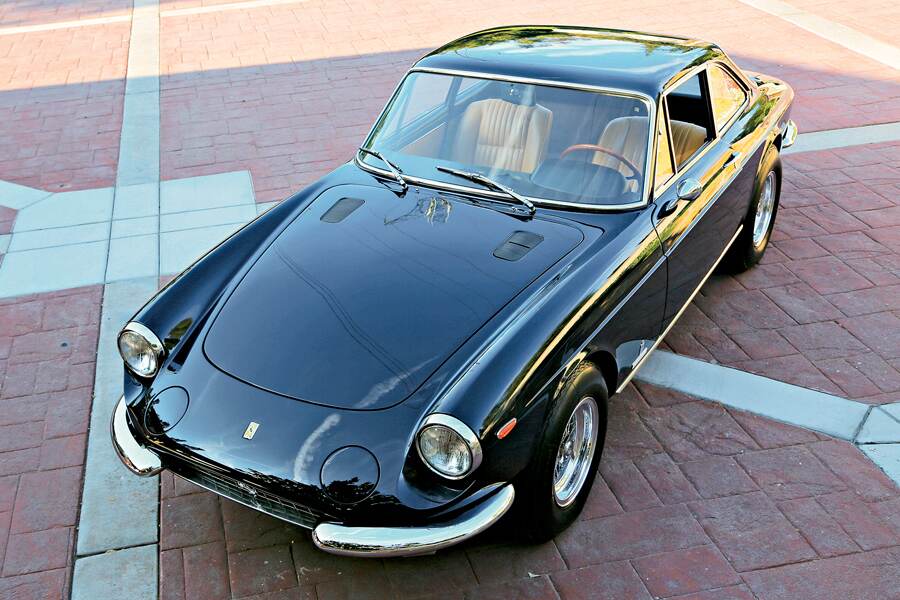 Eventually, they chose the path of least resistance and went with leather, which meant the only thing left was to decide on the color of that leather. Their research had shown the original interior combined dark blue carpet with the aforementioned blue cloth. That seemed like too much blue to them, however, so the seats were upholstered in tan leather.

S/n 8727’s restoration was completed in 2002. The partners later sold the Ferrari, and by 2015 s/n 8727 was on display at the Blackhawk Automotive Museum in Danville, California. There’s no doubt many visitors enjoyed the car’s beautiful lines, but few if any would have recognized its alterations or prestigious ancestry from a cursory glance. The Ferrari has since moved out of the public eye.

Interestingly, s/n 8727 was not the only Pininfarina-bodied car purchased and modified by Sergio. He later took delivery of a silver Dino 206 GT, with the aim of improving that model as well, a practice he would continue with newer models for years to come. This tradition of ongoing innovation, as well as the mutual respect between Sergio Pininfarina and Enzo Ferrari, helped the carrozzeria remain the automaker’s designer of choice for more than six decades. 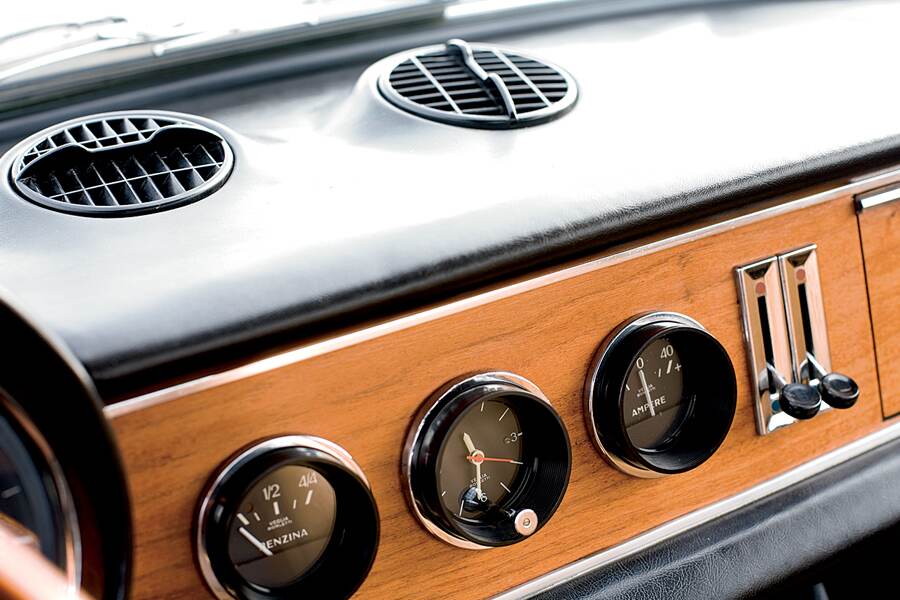 Thanks to John Ratto, one of the two partners behind the Ferrari’s restoration, for the information supplied, and to the Blackhawk Museum for making the car available for photography. 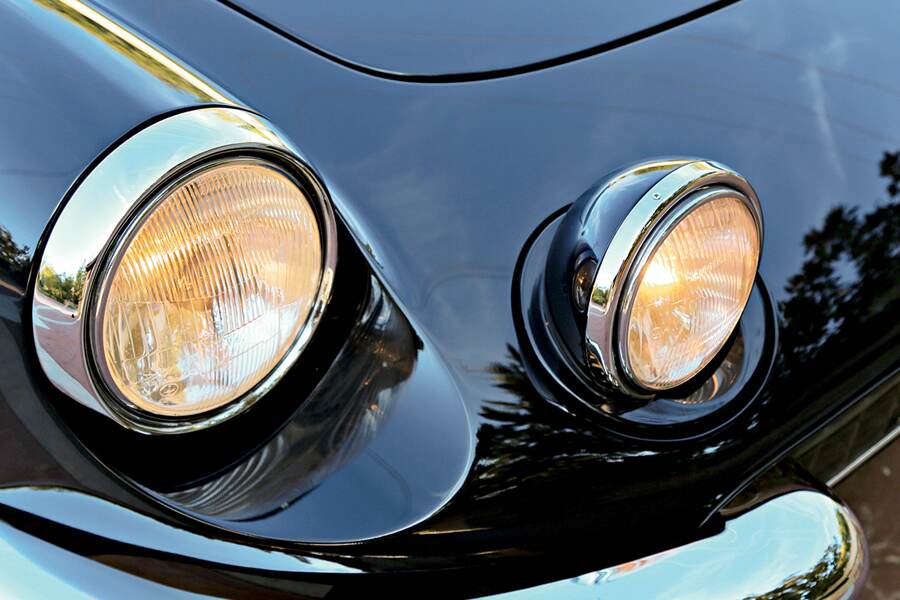 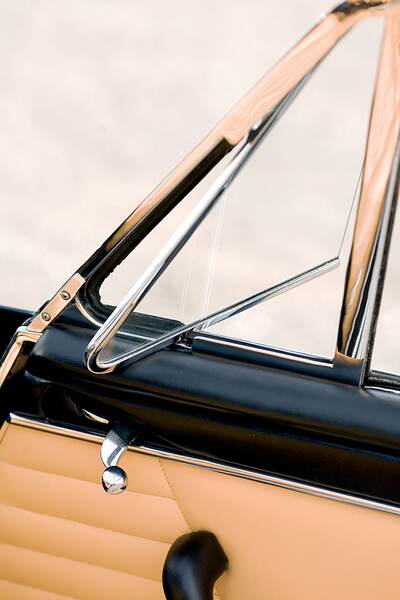 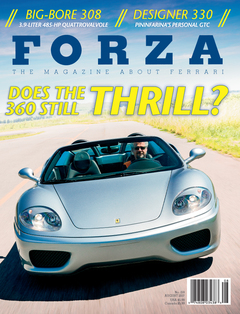