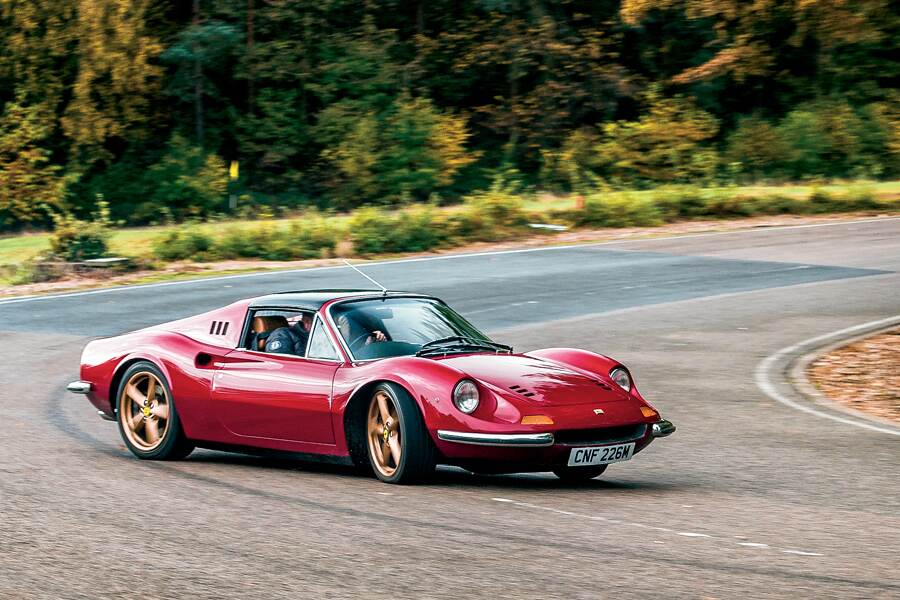 Over the last four decades, Surrey-based Mototechnique Ltd. has become one of England’s top Ferrari specialists. You’d never know from looking at the inconspicuous back-street garage, but this is where 250 GTOs, F40s, and Enzos come regularly for the most advanced kinds of renovations; the house specialty is rebuilding write-offs.

You may think it’s false modesty when company boss Kevin O’Rourke says he’s “nothing more than a copyist,” but he really does see his role that way. As he puts it, “All my working life, more than 50 years, has been dedicated to repairing and carefully restoring classic cars to their factory standards.”

While O’Rourke finds the work rewarding, it doesn’t allow him any freedom for original thought. So, starting in mid-2000s, he decided to let loose his inner car creator on a tired Dino 246 GTS (s/n 7680). This time, rather than restoring it, he would rebuild the car the way he wanted it to be—which meant updating its looks, upgrading its chassis, and replacing the Dino V6 with a proper Ferrari V8. 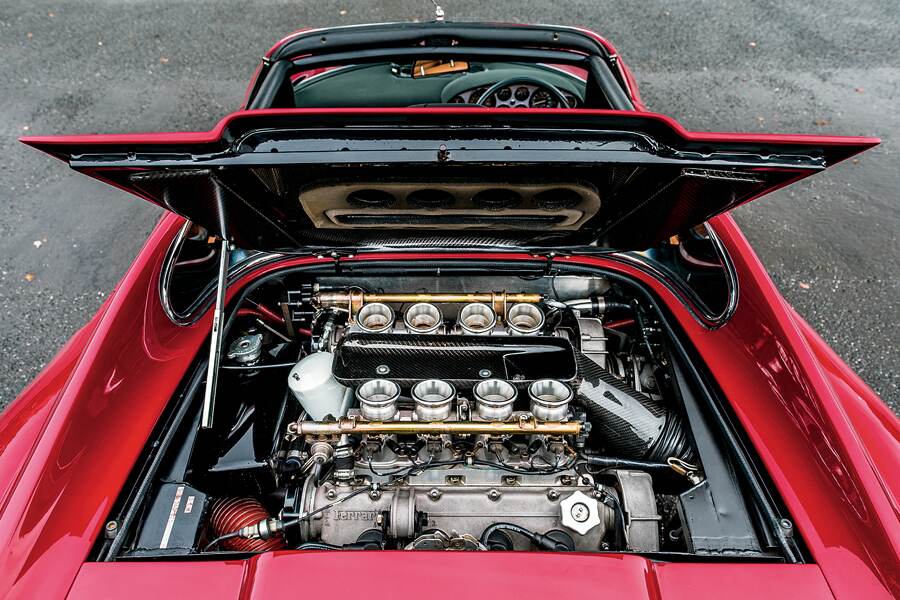 Twelve years and tens of thousands of English pounds later, O’Rourke has transformed that Dino into the stunning car shown on these pages. The project has aroused some ire and controversy online, but O’Rourke’s only concern during the creation process was when Dinos unexpectedly soared in value.

“When I started this pro-ject, Dinos, though highly admired, were relatively cheap,” he says. “I have to admit, I had moments of doubt regarding the course I had taken! Still, all the original parts are set aside, ready for the day I tire of life and the desire for originality with this car kicks in.”

That’s not likely to happen anytime soon, because O’Rourke’s having too much fun driving this Dino hot rod. 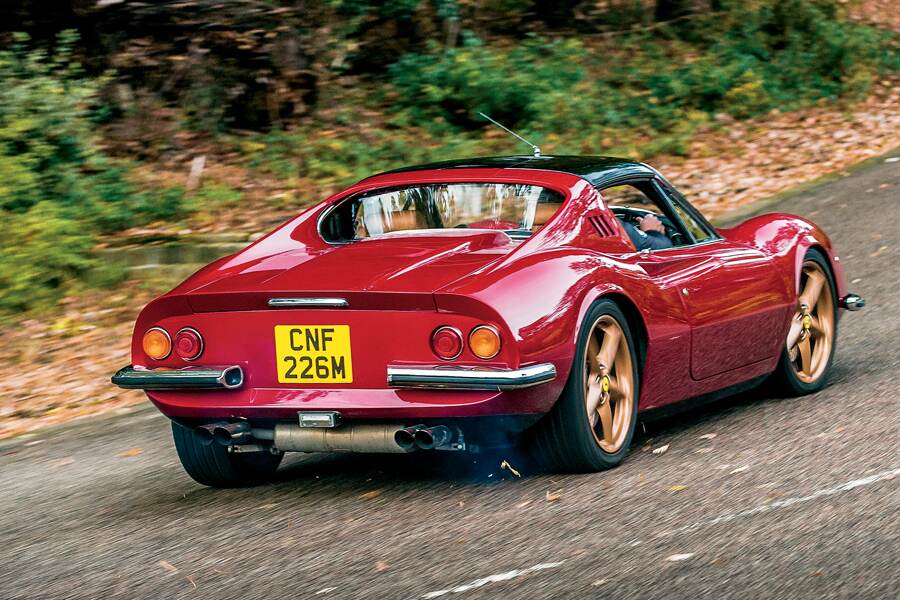 AS WITH EVERY PROJECT of this kind, O’Rourke’s quest started with a simple “what if” question. In this case, what if Ferrari had placed its first-generation V8 in the athletic Dino body?

Truth be told, O’Rourke went much further than the 308 GT4’s 3.0-liter 16-valve motor, advancing to the 3.2-liter 32-valve V8 from a 328. Upgraded with F355 throttle-body fuel injection and an ATL ECU, the 328 powerplant pumps out a meaty 300 hp. (A few days after our rendezvous, the engine was pulled to be enlarged from 3.2 to 4.0 liters, and an estimated 400 hp, courtesy of a new crank, titanium connecting rods, and larger pistons. While it’s off the road, the car will also be fitted with electric power steering.) 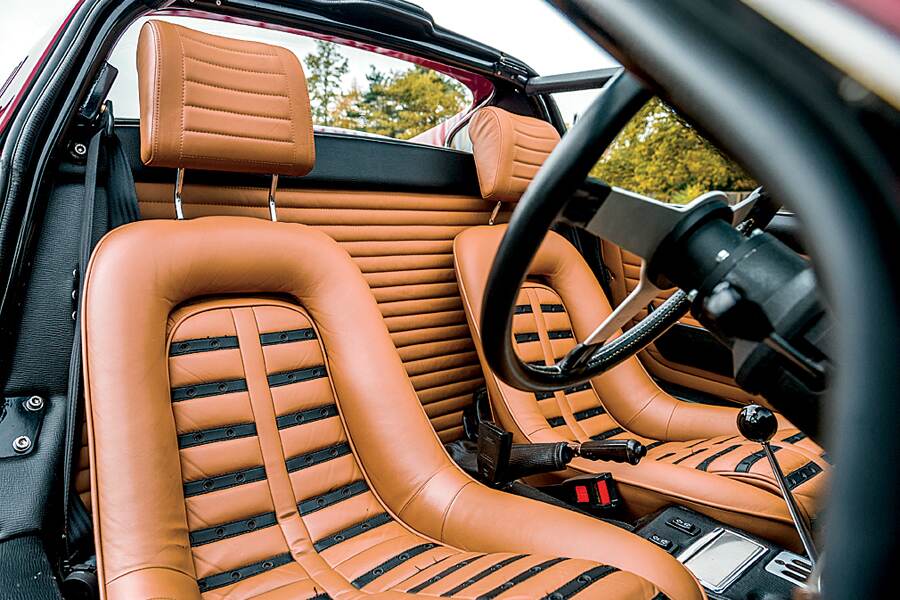 Packing all this extra performance into a four-decade-old chassis offers many virtues but, without plenty of planning, could also cause some troubles. “From the outset, our aim has been to develop a program of carefully thought-out and integrated improvements which deliver a balanced car with modern performance,” reports O’Rourke. “It is well known that the GTS suffers from torsional issues. During the build, we were concerned about the effects the additional power and torque might have on the car’s rigidity, so we installed a roll cage. It’s a fully integrated bolt-through design mounted at eight points.”

The cage’s solid black tubes cut through the gentle cabin of the ’60s classic and, when the targa top is removed, leave two rails exposed in a very un-Dino-like fashion. However, in a reflection of how much planning went into the project, these two sections can be easily detached to leave the original silhouette unscathed.

There are two other visual departures from stock. While it is fairly easy to accept the muscular bulge sprouting from the engine cover, a wink and nod to those in the know who realize something special is afoot, the 360 Modena wheels are a tougher sell to purists. Although the timeless five-spoke BBS alloys complement the swooping lines of Leonardo Fioravanti’s design surprisingly well, despite a quarter-century difference in their respective ages, O’Rourke admits he chose the wheels mostly for pragmatic reasons: They had the same bolt pattern as the Dino’s hubs and were a perfect fit for the matching brakes. (Mototechnique is currently at work upsizing the original Campagnolo wheels to work with modern rubber.) 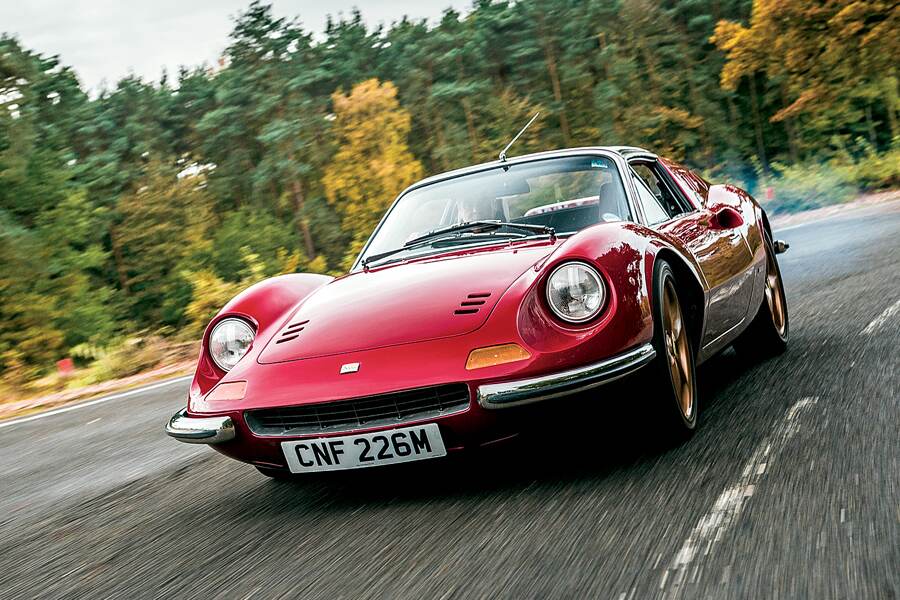 While some might disagree with O’Rourke’s aesthetic choices, it’s hard to imagine any concern about the quality of the conversion. The car is a testament to the efforts of Mototechnique’s craftsmen, and their talent shines through on both inconspicuous details, such as the composition of the masterfully-laid custom rich red metallic hue, and grand things, like the practically jewel-like finish of the engine bay.

The Dino’s interior also received a full-leather make-over that, despite the roll cage, creates an ambience suitable for grand touring. This work was done by O’Rourke’s son, Rob, who’s set up his own successful classic-car business: O’Rourke Coachtrimmers.

Indeed, the cockpit’s finery (far nicer than anything the Italians fitted to the Dino in period) speaks more to the car’s mission than the 300-hp V8 and updated underpinnings. O’Rourke’s goal was not to create a track-day toy but to update a vintage car to modern levels of usability and comfort. 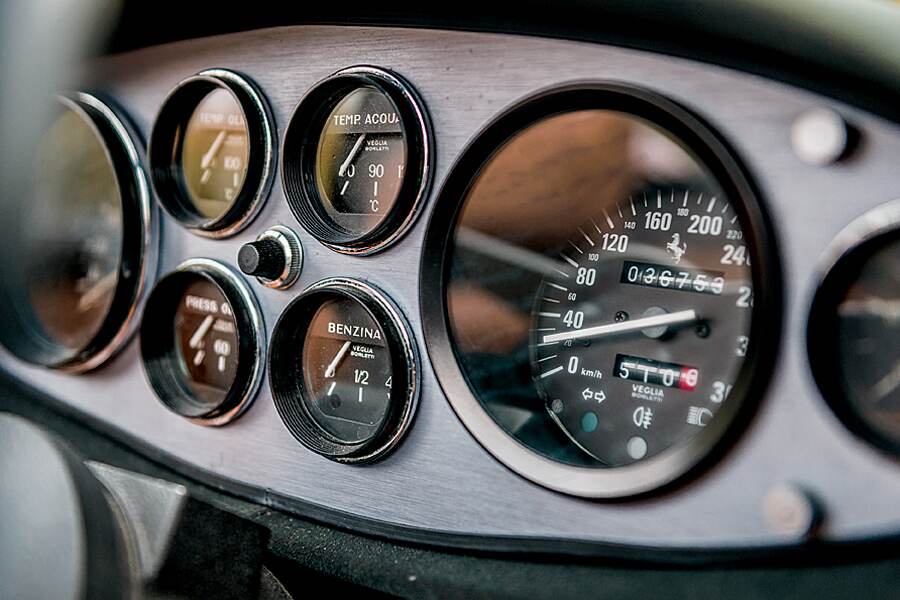 “If I turn the key and she starts without a complaint, hot or cold, even after an extended period of storage, to me, it is the greatest reward for the 12 years of the effort,” he says. “One of the first drives I had in this car was an 800-mile solo ski trip to the Austrian Alps. I stopped only for fuel and coffee, and the car performed perfectly in all kinds of conditions, even at 6,500-foot elevations in the freezing mountains. I’ve used this car for several trips across the Continent and it always performed as expected.”

O’Rourke has made many improvements that come in handy when one wants to drive this vintage Italian machine year round. These include a more effective (but still Ferrari OEM) air-conditioning system, modern heat and sound insulation, and 100-watt headlights.

NONE OF THE CAR’S modern updates are visible from inside. Dropping into the driver’s seat is like falling back into the 1970s; it’s the same tight cabin with a mouse-hair dashboard, Daytona-style seats, aluminum-spoke steering wheel, and low seating position, from which I can see the two lovely hips sculpted by the front fenders. 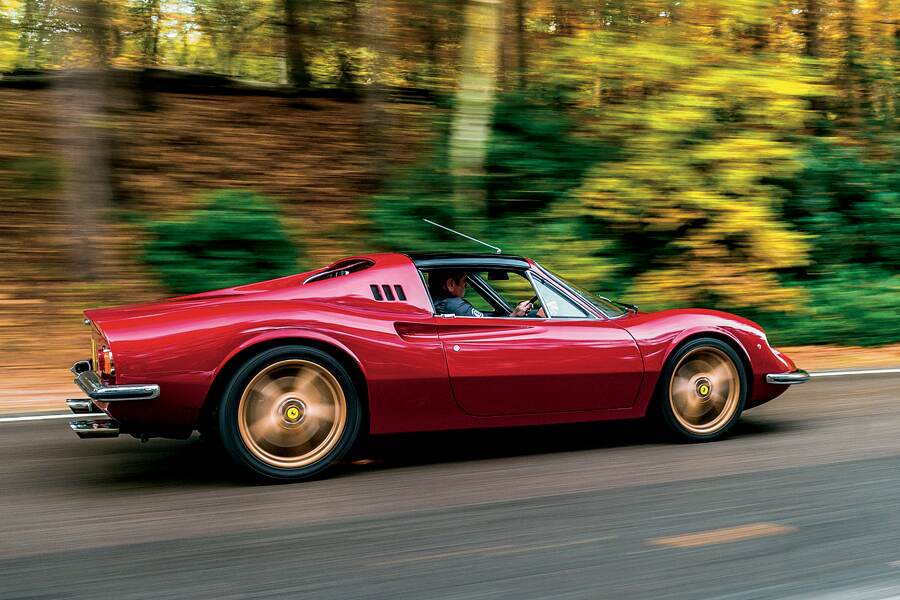 Starting the 328 Dino is simplicity itself; just turn the key, no pumping of the throttle pedal necessary. What emerges from behind me is the fierce mechanical growl of a full-grown Ferrari V8, not the higher-pitched V6 howl normally associated with these surroundings. It seems a little strange at first, but a couple of stabs at the loud pedal reveal that O’Rourke’s heart transplant is a good fit.

It only gets better on the move, as the V8’s extra 135 horses push the Dino to new heights of performance, even at modest revs. Before the 3.2-liter engine gets to the redline, it’s worth taking a moment to appreciate how easily it moves this compact car around and easily builds speed in the higher gears compared to the original V6. In short, the V8-powered Dino feels much more dynamic, capable, and convenient than the original. For its creator, that mission has unquestionably been accomplished.

There’s much more on tap, however, and O’Rourke took me to the appropriately vintage Longcross proving grounds to demonstrate. There, what was supposed to be a serious examination of the car’s dynamics on the challenging twists of the famous “secret” test loop, quickly turned into a childish sequence of drifts, top-speed chases, and quarter-mile measurements. It’s a different kind of fun than the usual Dino fare, but by no means poorer; the 300-hp motor builds speed and oversteer angles never before seen in a Dino. Thanks to the extensive stiffening and modest suspension updates, the body takes it all in stride, returning great control and nimbleness to go with the newfound playfulness. The brakes can almost seem like overkill, until you realize how late it’s possible to brake, or you pull the wonderfully analog handbrake lever and effortlessly set the car sideways for even more heroics. 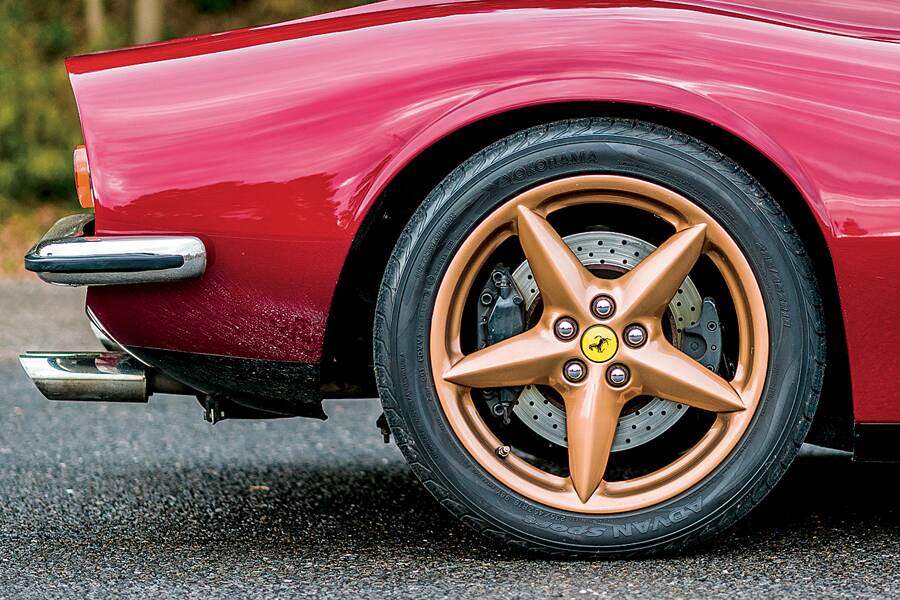 Should a Dino really be treated this way? Definitely! To my way of thinking, and the purists will no doubt disagree, O’Rourke’s 246 V8 brings an incomparably higher level of enjoyment than its stock sibling without taking anything in return.

“I wouldn’t have my car any other way,” O’Rourke admits. “It’s good to think freely and stay open-minded. In any case, any downside is covered by the offers I have from wishful purchasers.”

In addition to those offers, O’Rourke has just accepted a commission to build a second V8-powered Dino. While the purists, and perhaps many of O’Rourke’s own customers, wouldn’t approve, I suspect a quick drive in the V8 Dino would change their minds. 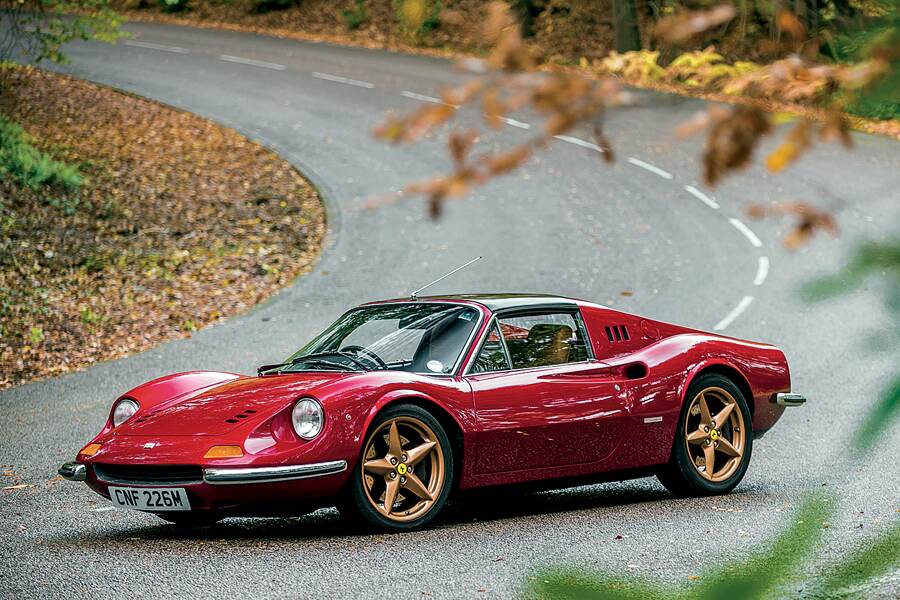 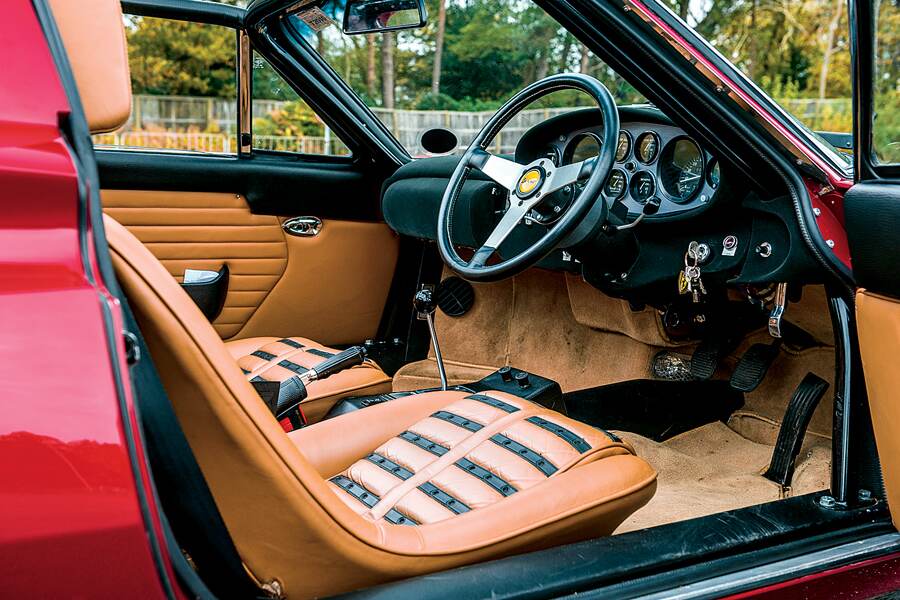 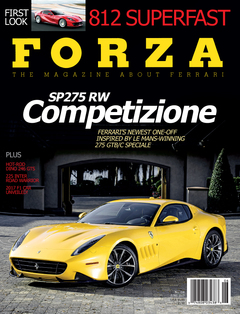