Track-day specials are a staple of Ferrari’s recent lineup—but that wasn’t always the case. 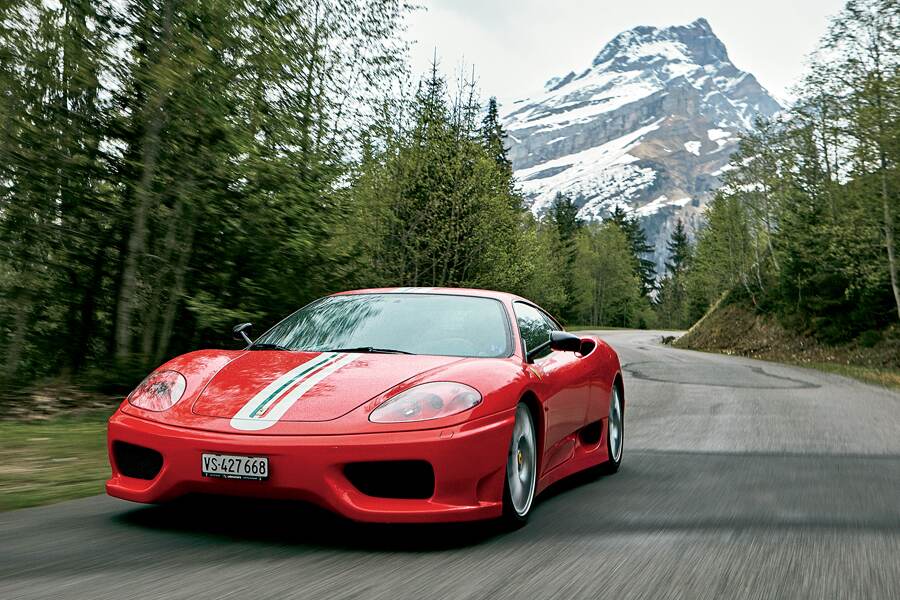 Enthusiasts around the world are eagerly anticipating the arrival of a lighter, more powerful, track-focused version of the 488 GTB. Not only will such a stripped-out turbocharged road racer be a spiritual successor to the F40, it will thoroughly rival that pesky, albeit very accomplished, machine from the British Isles, the McLaren 675 LT [“Enemy at the Gates,” FORZA #152].

While hard-core track-day specials have become a regular feature of the Ferrari stable, that hasn’t always been the case. It’s arguable the first such car was the F355 Challenge, as some early examples were street legal, but the lineage properly begins with this car: the Challenge Stradale.

In 1999, Ferrari introduced the revolutionary 360 Modena, named after the town in which Enzo Ferrari was born. The sleek 360 was a significant step up from its predecessor, the F355, in performance, aerodynamics, and technology. Modena fans got an even bigger treat in 2003, when Maranello created a new version in the mold of the 360 Challenge race car. 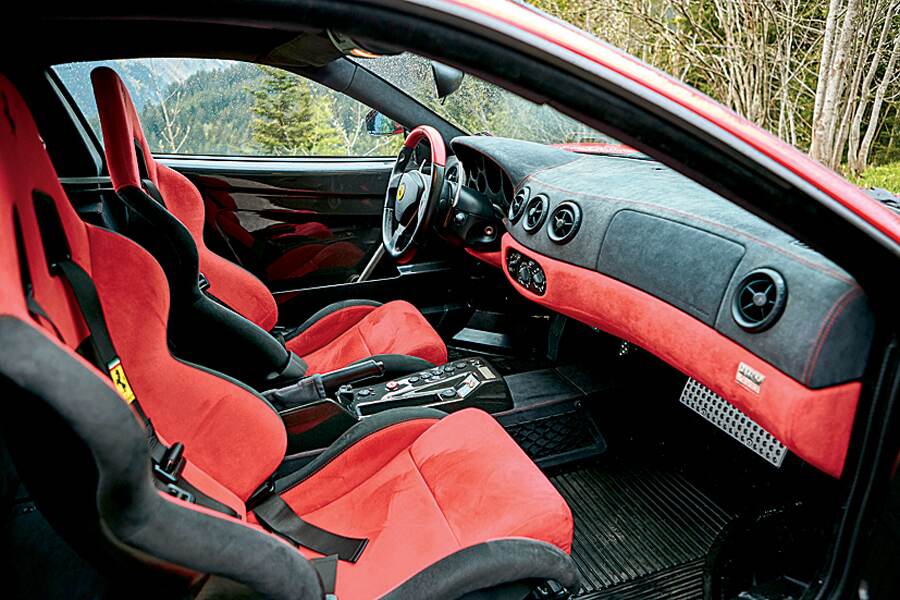 To be clear, the Challenge Stradale wasn’t an homologation special, a production model like the 288 GTO (or Porsche’s 911 GT3 and GT3 RS) built specifically to form the basis of a racing car. Instead, it was designed to bring the feeling of a racing car to the street—or stradale_, in Italian.screen load">

How did Ferrari do it? Visually, the Challenge Stradale looked focused compared to a regular 360. While the Modena’s aluminum skin remained untouched, new bumpers, bespoke side sills, and 15mm (0.6 inch) lower springs created a new hunkered-down stance. The result was a perfect visual blend of road and race car, down to the standard Brembo carbon-ceramic brakes nestled behind the 19-inch Challenge-style wheels.

As I walk to the rear of the car, my eye is drawn to the Perspex rear window, which is supported by two thin carbon-fiber cross bars. The minimalist engine bay seems desolate compared with the extensively wired, ancillary-packed compartments found in contemporary machinery. 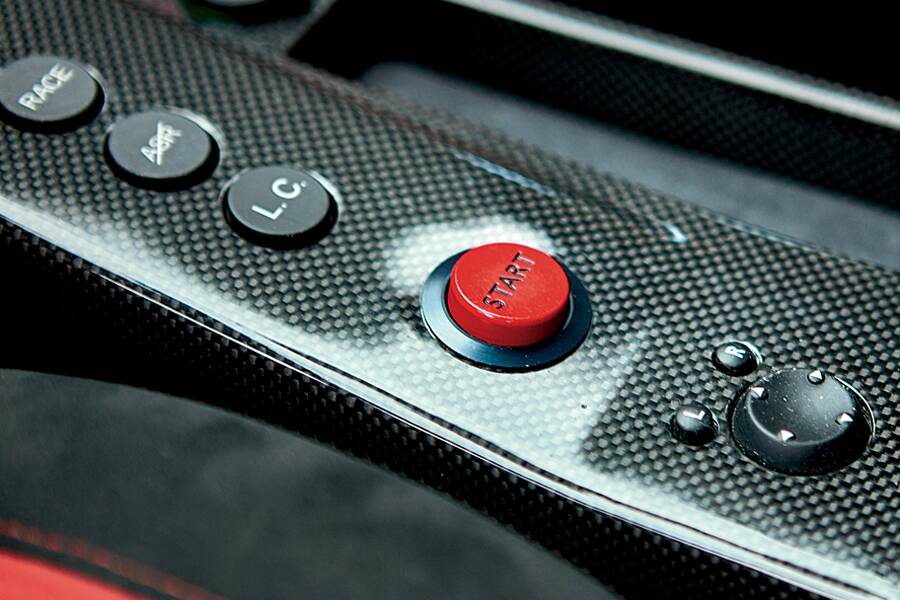 The Challenge Stradale’s exhaust outlets reside in the same location as the Modena’s, but the diffuser between them is much larger. When I bend down to examine it, I can also see the car’s flat underfloor; the engineers clearly had control at high speeds in mind! (All the aero upgrades bump downforce to nearly 600 pounds at 186 mph, some 200 lbs. more than the Modena.) The Challenge Stradale’s model-specific Pirelli P Zero Corsa tires—225/35 up front, 285/35 at the rear—will no doubt improve the car’s grip, as well.

Power is a major part of the track game, of course, so Ferrari gently bumped up the 3.6-liter V8’s compression ratio, fitted a larger airflow meter, ported this and polished that, installed a less-restrictive exhaust, and so on. The result was 25 more horsepower, for 425 total, at the same 8,500 rpm, and a 4.1-second 0-60 sprint, down from 4.5.

The improvement in acceleration was further aided by a faster-shifting F1 transmission (the only gearbox available) and a serious diet. In addition to big-pound reductions like eliminating sound deadening, Ferrari’s engineers saved grams in numerous small areas, such as making the suspension springs and wheel bolts from titanium and the airboxes from carbon fiber. In the end, the Challenge Stradale tipped the scales at 2,601 pounds versus the Modena’s 2,843. 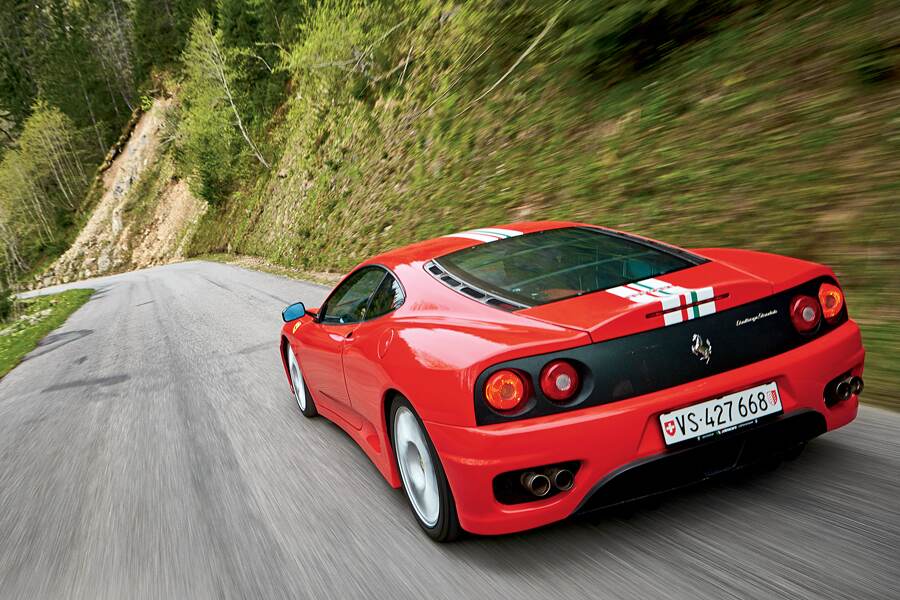 The weight savings is most noticeable in the cabin. If you think today’s F12tdf or 458 Speciale are stripped out, you haven’t spent much time in a Challenge Stradale. There’s no infotainment system—not even a radio—and no screens of any sort. Actually, there’s very little at all on the two-tone Alcantara dash beyond the analog gauges and HVAC controls. A quick glance at the carbon-fiber transmission tunnel further illustrates the simplicity of the cabin; there are no luxuries, only function.

The minimalism continues under my feet. The welds in the aluminum frame are exposed, and simple rubber mats cover the carbon-fiber floorpan; as on the F40, you can see where the floor has been glued to the chassis. Carbon fiber has also been used for the supportive sport seats and door panels. The doors themselves are as light to open and close as you’d expect.

Clicking the simple four-point harness into place (U.S. cars received three-point belts), I’m faced with a button-free three-spoke steering wheel and a set of easy-to-read instrument dials. The rev counter takes center stage (the speedometer’s to the right, the temperature dials sit to the left), and the 7,000-rpm mark on the tach perfectly lines up with the black leather ring at the top of the steering wheel. The VIN plate sits right atop the steering column, and, oddly, the right shift paddle is significantly longer than the left one. 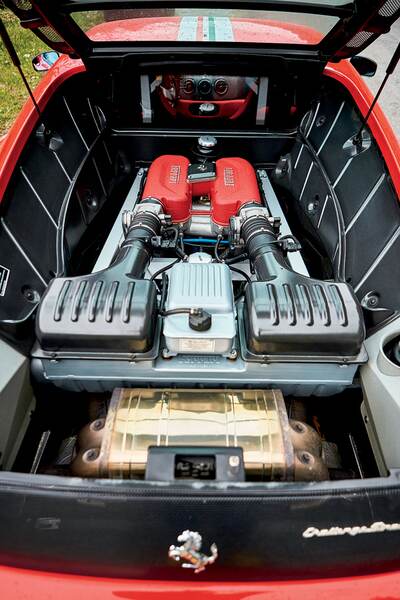 I turn the key and press the rather old-looking starter button on the transmission tunnel. The engine whirs, then erupts with a harsh, urgent bark. Those standing near the rear of the car are treated to the full unfiltered soundtrack at startup, but from inside the V8 doesn’t sound particularly appealing when it’s idling. Lower the window and blip the throttle, though, and the hard-edged, metallic voice of this naturally aspirated unit speaks up loud and clear. It sounds rawer and less tuned than the intense, “engineered” voices of Ferrari’s more modern machinery, which is in keeping with the functional nature of the car.

JUST OUTSIDE THE TOWN of Les Diablerets in Switzerland, a tight mountain pass runs south up the mountain towards the next valley. It is, in my opinion, the perfect piece of tarmac for the Challenge Stradale, although the bitumen surface has been repaired in a few places, probably owing to the harsh weather conditions these roads are exposed to every season.

I pull the right paddle to select first gear and pull away. Shifting up to second, it’s clear that, by modern standards, the six-speed single-clutch F1 transmission takes its time (It’s hard to believe 150 milliseconds was once considered lightning-fast, and that’s the fastest shift possible in Race mode!) I can easily feel how the engine’s power delivery is interrupted, then the gear change follows, then the torque reappears. 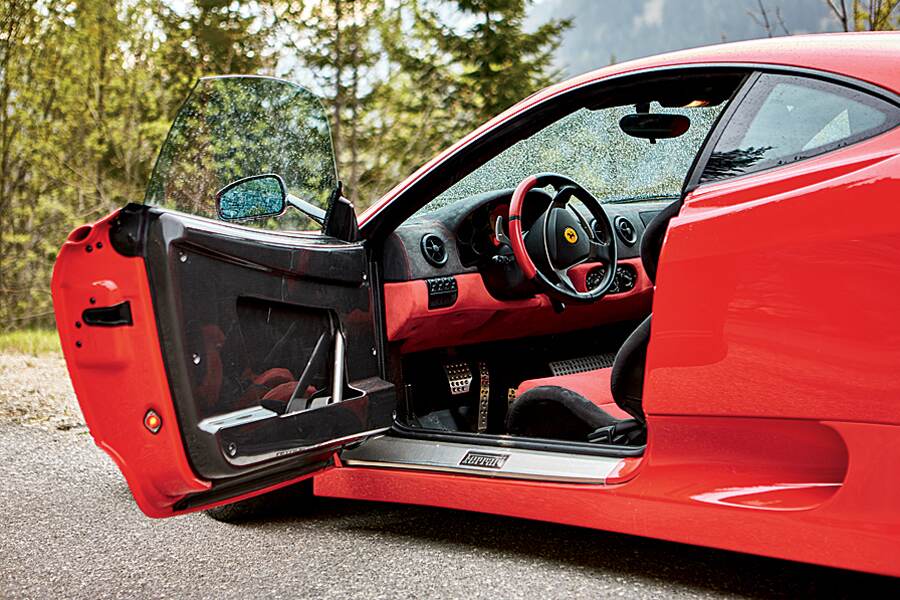 For best results, you’ll want to lift off the throttle ever so slightly before a gear change to keep things smooth. Get it wrong, and the transmission will make its displeasure clear. That’s really the only jarring note in the Challenge Stradale experience, however, and it’s an easy one to forgive, as the rest of the car is fantastic.

The engine, for instance, will happily zip the Ferrari along at 3,500-4,000 rpm, then zings to life above 6,000 rpm. Once on the proverbial cam, the V8 seems to have almost no inertia surrounding the 8,500-rpm redline. The tachometer needle swings so quickly and effortlessly that I find myself fast-tracking upshifts.

The brakes, borrowed from the Enzo supercar, are also invigorating. They react the moment I press the firm pedal and, despite a bit of pad noise, make easy work of whatever task is at hand. I’m further struck by how little the nose of the car dips under braking. 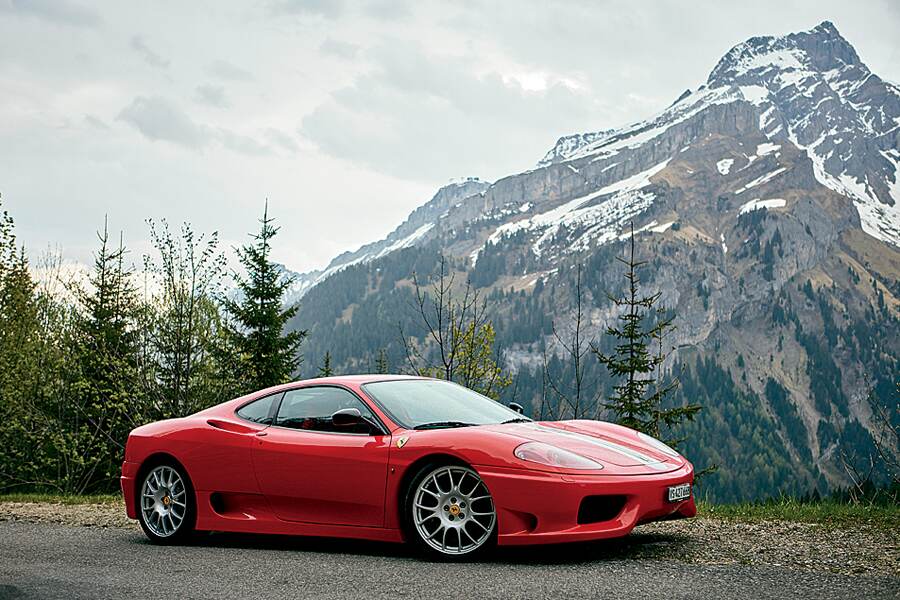 Turn in is impressively quick and direct (thanks to the stiffer springs, a larger rear anti-roll bar, and a sharp steering rack), and there’s sufficient feedback through the wheel. The seats and harness comfortably hold me in place, and the clattering of fine road debris against the car’s underbody and inner wheel arches only adds to the exciting, back-to-basics, sports-car experience.

The original owner of this car chose not to specify the optional audio system, which, aside from adding a few pounds, is contrary to the fundamental idea of the Challenge Stradale. He did opt for normal glass side windows instead of the Perspex sliding units [like the harness, not offered in the U.S.—Ed.], but the improvement in usability and visibility means we won’t hold that against him! Nor will the car’s current owner, who graciously handed me the keys after owning it for only about two weeks.

During that fortnight, the new owner took his Challenge Stradale for a proper drive: a 1,700-mile road trip through southern Europe, a route that included some of the best driving roads in the world. “We started in Switzerland and made our way down through France to the coast,” he told me. “We then headed back north, which included a memorable drive on (the exquisite) Route Napoleon.

“Although the four-point harness really keeps you in place through the mountain passes, it presents a challenge when you need to lean out the window to pay your fare at tollbooths,” he continues. “Then there’s the large turning circle, which is less than ideal, although less of an issue than you might think.

“I like the little details about the car,” he concludes. “These include the Alcantara on the dashboard, the big, red and very simplistic starter button, and the overall rawness of the car. I also like the fact that the CS is actually not a conventional automatic. It will shift down automatically, but you need to execute every upshift.”

In an era when 600 and 700-hp Ferraris are nothing out of the ordinary, 425 hp might cause a few enthusiasts to frown. Fortunately, the Challenge Stradale isn’t solely about speed; it’s more about the overall driving experience and the way the car communicates. This Ferrari is far more involving to drive than, say, the much newer and faster 458 Speciale. Add to that the Challenge Stradale’s position as the first of this rarified breed, and it’s no surprise this Ferrari has become an instant classic. 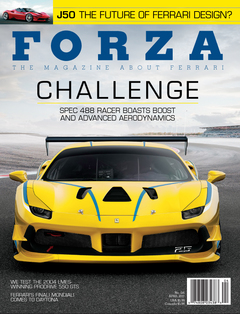 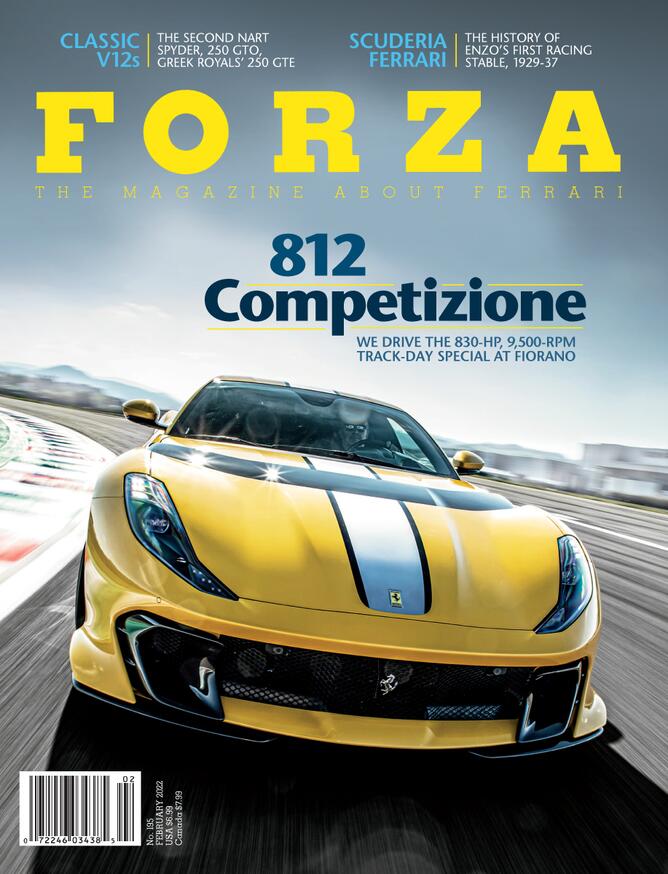