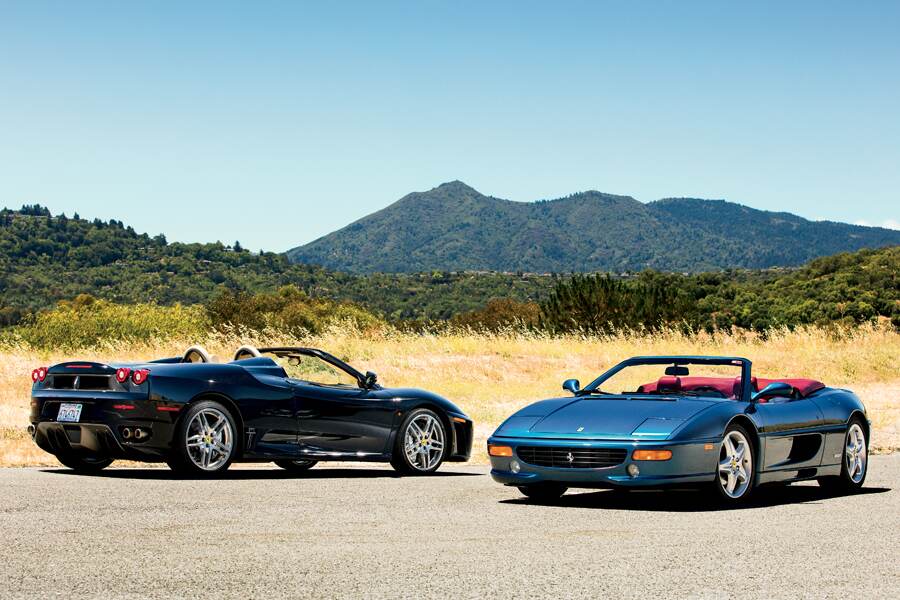 To many enthusiasts, there’s just something right about a convertible. Coupes may be the choice for track use and ultimate performance, but open cars better engage the senses: wind in your hair, sun on your face, engine roaring away in your ears.

These two Ferraris represent Maranello’s vision of open-air excitement in the 1990s and 2000s, respectively. Both are based on their closed siblings, and share those cars’ mechanicals, bodywork, interior, and more. At heart, the F355 Spider and F430 Spider are simply decapitated coupes with fabric roofs—and given how good the F355 and F430 berlinettas are, that’s no bad thing.

After decades of driving BMW M5s and Porsche 911s, in June 2011 Bob Hall bought his NART Blue F355 Spider. He was initially attracted by the car’s design, while his wife was drawn to its striking color combination. 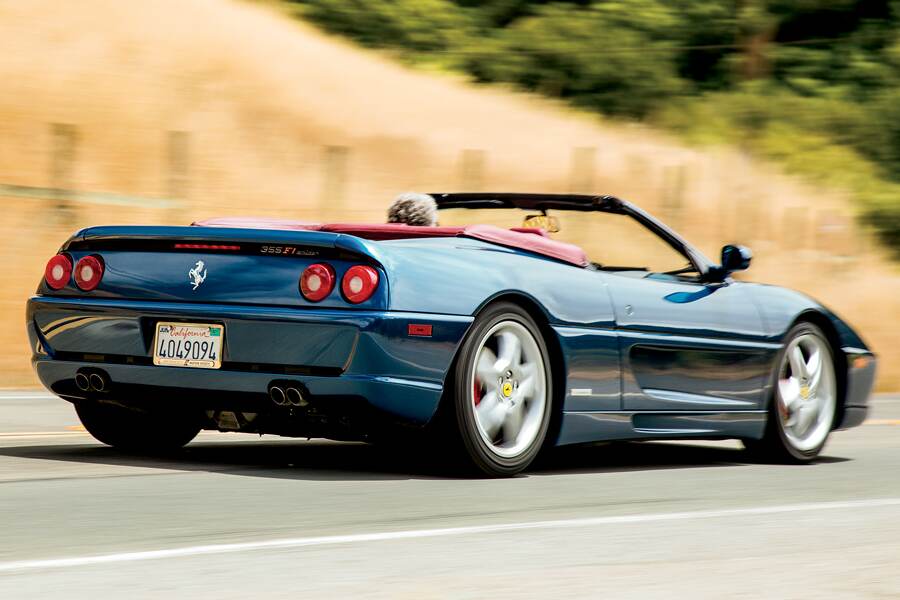 “The F355’s Pininfarina design combines a beautiful shape with more of a wide, low, muscular look than the original 308 it evolved from,” he says. “In addition, the Spider version has a bit of a ‘dangerous’ feel to it, with the vents in the doors. My wife just says it’s the most beautiful car we’ve ever owned.

“The other very strong attraction was the unique Formula 1 sound of the engine higher in the rev range,” Halls adds, which may be part of the reason he’s put 15,000 miles on it. 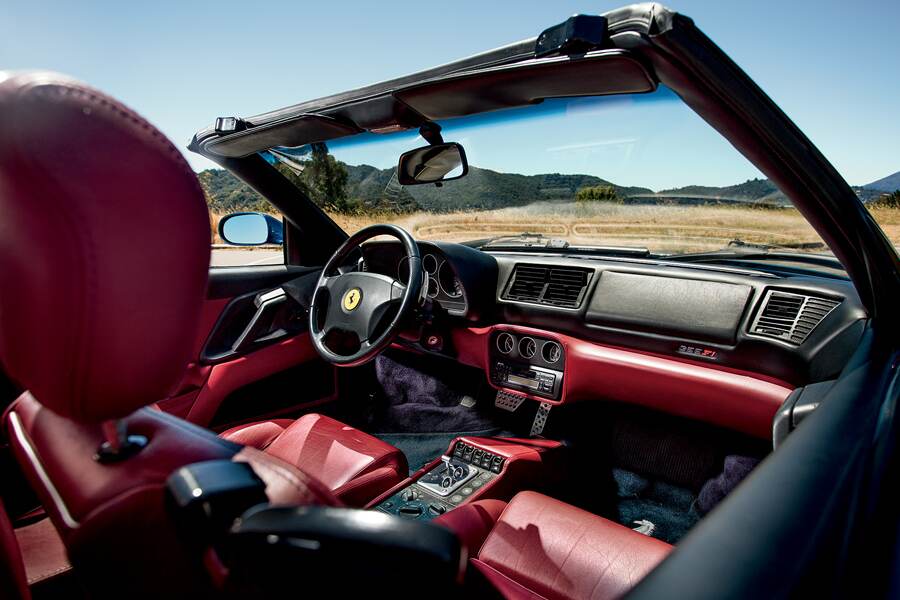 “The car belonged to a client of mine,” longtime Ferrari aficionado Shone explains. “He bought it because it was beautiful, but he just didn’t use it. I had recently driven the car and loved it. I really liked the color combo and the options and the fact it was really pristine.”

I’ve driven several F430 Spiders, and still vividly remember the model’s press launch back in early 2005, although it’s been a few years, and many 458s, since the last time I was in one. I’ve likewise piloted a handful of F355s over the years, but never a Spider and never one with an F1 transmission. The day ahead promises to be very interesting.

AFTER LESSONS LEARNED during the 458 Speciale vs McLaren 675 LT comparison a couple of issues ago, I start in the less-powerful F355. Actually, I start next to it, drinking in the details of one of the best-looking Ferraris of the last several decades. 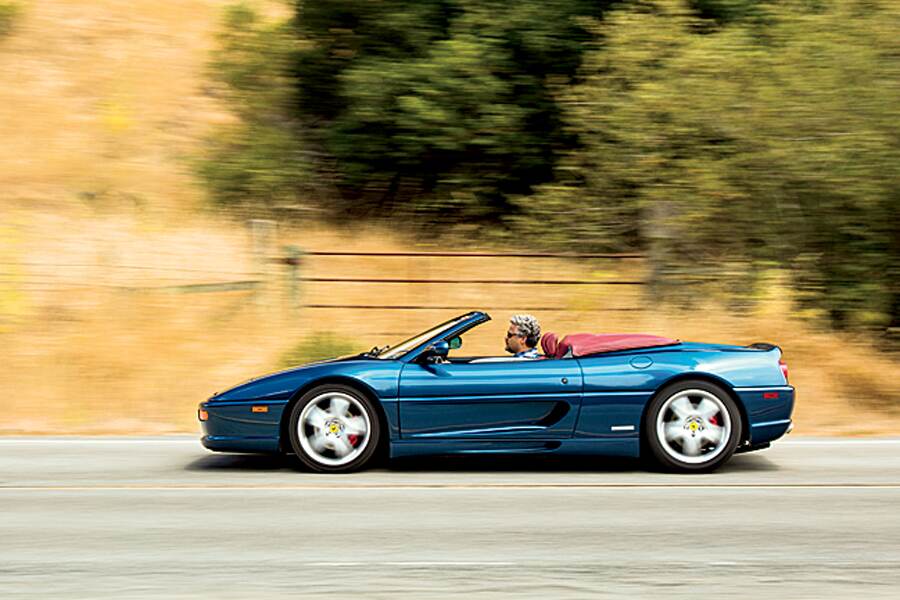 As is often the case, the F355 berlinetta is more attractive, thanks to its flying-buttressed roofline, but the low, wide, and sleek Spider’s still gorgeous. The best angle is probably the rear three-quarter, which blends a simple, clean, diffuser-free fascia into the flowing spoiler, lean hips, and deep character line that bisects the profile above the side intakes.

Really, there’s no bad view, and if the protruding tonneau cover is unfortunate (although attractive in its contrasting burgundy color), it doesn’t detract from the purposeful appeal of the slatted rear deck. Even with its pop-up headlights, the front of the car feels classic rather than dated, thanks in part to the mouth-like grille and timeless round driving lights.

The F355’s interior looks almost as good as its body, but is let down in a few functional areas. The four-spoke steering wheel feels too large and is tilted forward at an awkward angle, forcing a bent-leg, straight-arm driving position, and the jewel-like drilled aluminum pedals are gently offset to the right. The crowded speedometer and tachometer are illegible at a glance, as is the sea of buttons and dials between the too-hard seats. All that said, the F355’s cockpit offers significant ergonomic improvements over earlier V8 Ferraris. 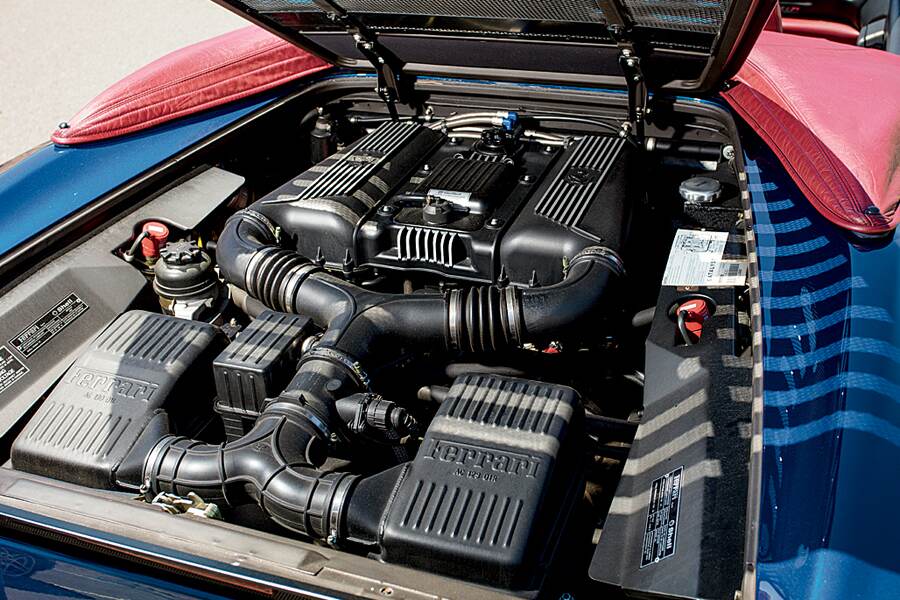 None of those forebears had this car’s engine or transmission, either. The F355’s 3.5-liter V8 delivers peak power at a shrieking 8,250 rpm (redline arrives at 8,500), and peak torque at an even more astonishing 6,000 rpm. This engine clearly needs to be worked hard to deliver the goods, and Ferrari aided its rev-happy nature by endowing it with five valves per cylinder (three intake, two exhaust), titanium connecting rods, and a lightened crankshaft.

Little of this free-wheeling nature is apparent at start-up. The V8 whirs and growls awake, then settles into a treble-heavy, purring idle. A pull of the right-hand shift paddle clunks the optional F1 transmission into first, and with a little gas the Ferrari smoothly pulls away from rest.

Low-speed shifts come much more quickly and smoothly than I had expected, and the engine is fairly gutless when puttering around. The V8 perks up around 4,000 rpm, but doesn’t fully come alive until 6,000—at which point it unleashes a steadily rising wave of power and the instantly recognizable, high-pitched wail of a 1990s’ Formula 1 car. 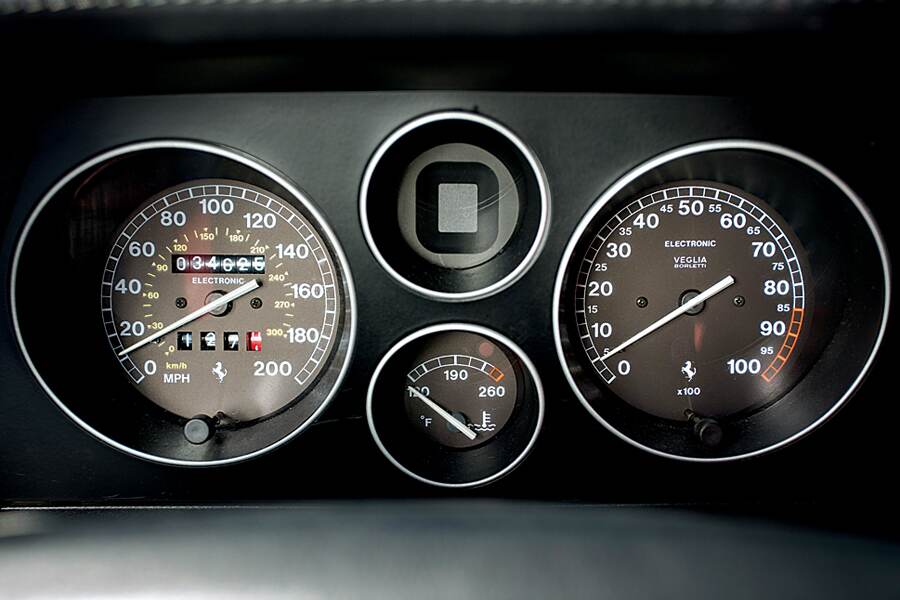 Kept zinging between 6,000 and 8,250 rpm, the F355’s engine is a masterpiece, and its 375 horses propel the car down the road more quickly than I remember—that or the V8’s screaming intensity and the wind rushing overhead are making things seem faster. The free-revving engine is the highlight of the driving experience, its five-valve song seemingly hard-wired into my brain; like an addict, I’m constantly looking for opportunities to enjoy the rush.

The F1 transmission snatches gears with a wallop, which can be smoothed out with a light lift of the gas pedal. Downshifts feel quicker than upshifts, and are accompanied by a staccato crackling from the exhaust, but both are definitely on the slow side by recent standards.

Also revealing its age is the car’s steel chassis. Hall’s F355 is a 1999 model, the final year of production, yet the open Ferrari doesn’t like bumps, which send a sharp thump through the structure and occupants. There’s a bit of cowl shake as well, although bad roads don’t unduly affect handling. 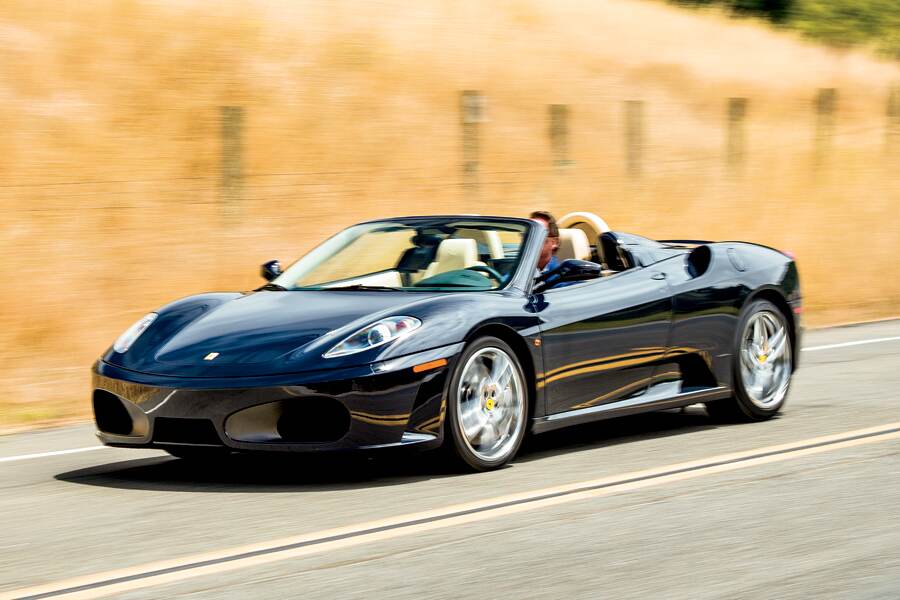 Regardless, the F355 seems happier the harder I push it. The steering feels best in the corners, where it weights up and sends reams of information about the road below. While the suspension allows a fair amount of lean and bounce, it also delivers plenty of grip. There’s a noticeable gap between the engine’s fury and the chassis’ ability to manage it, but the Ferrari balances this mismatch with its affinity for being tossed around—an attribute enhanced by the car’s narrow body, which allows me to exploit more of the road.

It takes confidence, familiarity, and focus, but keeping an F355 on the boil, mile after mile, rewards with a serious old-school thrill. With no electronic aids to help or hinder progress, it’s all about what the driver brings to the party: how well he or she can read the road, work the chassis, and exploit that magical V8.

After a fast run, it’s almost impossible to climb out of an F355 without a smile on your face. That goes double if there’s an even faster Ferrari to climb into next. 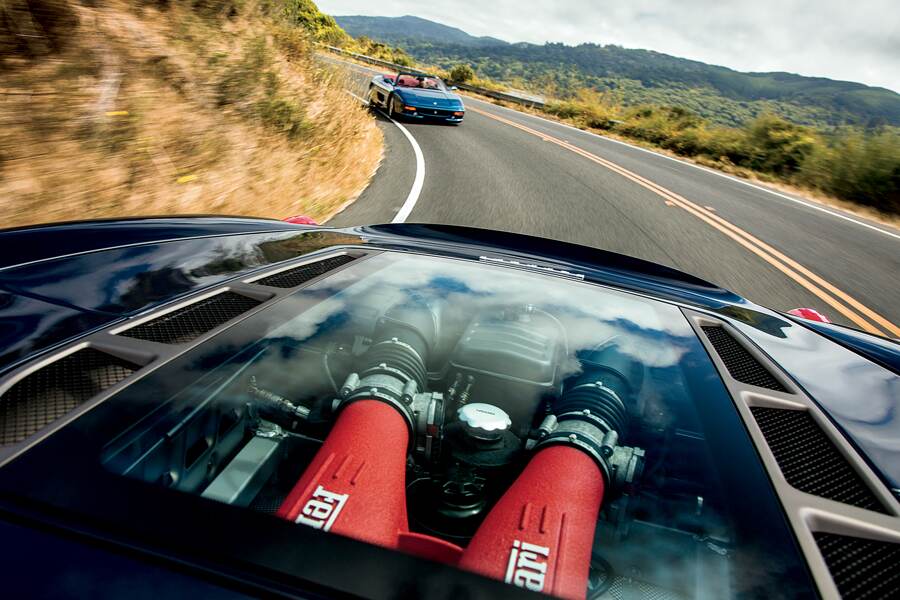 IN MANY WAYS, the F430 is everything the F355 isn’t. Torquey. Solid. Effortless. And, frankly, not so pretty.

While the buff F430 was a great aesthetic improvement over the feminine 360, it appears at best functional when placed next to the artful F355. The F430’s rear end, with its partially exposed taillights and large diffuser, is its most handsome aspect, and the glass engine cover (which unfortunately also reveals some very amateur-looking welds on the subframe) is a work of art. In contrast, the nose feels bland, its nostrils ungainly, and the profile just seems bulky, with the rear deck looming above the cockpit and the roll-over bars and their surrounding bodywork muddling the lines.

There are no such disappointments inside the car. Drop into the comfortable, supportive seat and you’ll discover the driving position is spot-on. Dead ahead sit a perfectly shaped, sized, and angled steering wheel and prominent, easily readable gauges. The HVAC controls are where you’d expect them, although it takes a few seconds to find the power-window switches bracketing the radio. 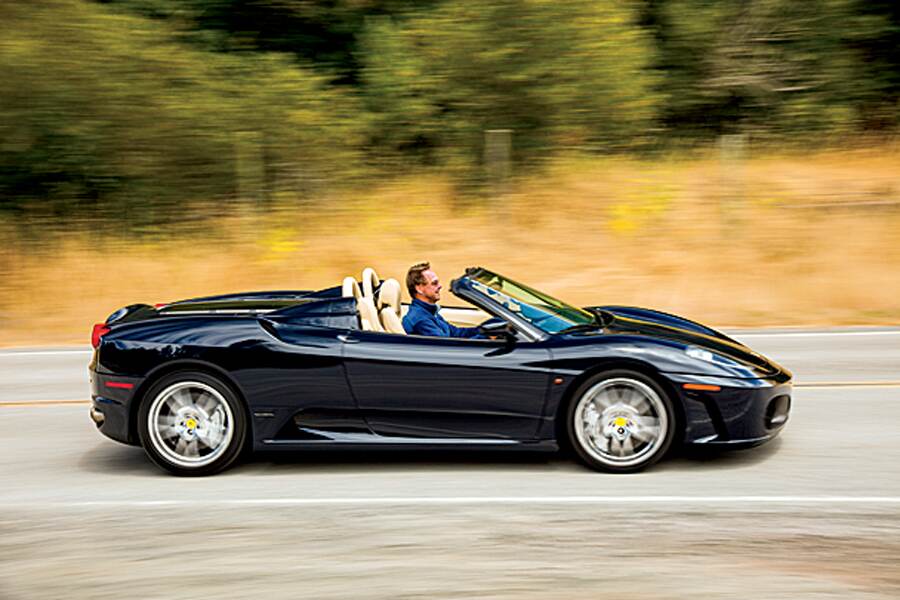 Another difference between F355 and F430? The newer car is loud, its 4.3-liter V8 firing with a deep roar that reappears any time the throttle pedal passes the halfway mark. Plant your foot to the floor and shift at redline to enjoy the baritone wall of sound. Keep a light touch and the engine note recedes into the background but never entirely disappears.

The F430’s full-bore sound perfectly matches its output. The engine offers serious grunt from as little as 3,000 rpm and revs eagerly to its 8,500-rpm redline, with an extra surge of angry kicking in around 7,000 rpm. By the standards of the 458 Italia and 488 GTB that followed, the F430 is nearly as outmatched as the F355 is against it. On the road, though, I never once wish for more power.

Similarly, the F430’s single-clutch transmission isn’t nearly as quick and refined at low speeds as a newer dual-clutch unit—in fact, it’s barely on par with the F355 in that regard—but snaps off shifts with alacrity when I’m pushing hard. 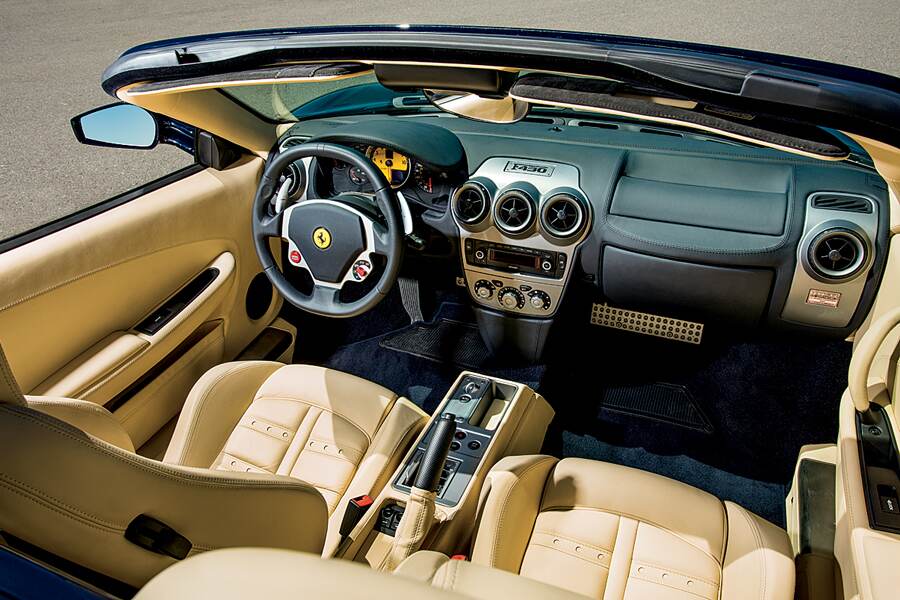 Balance is perhaps the best way to sum up the F430 driving experience. Despite being much more powerful than the F355, the newer Ferrari’s handling and braking abilities better match its speed potential.

This F430’s carbon-ceramic brakes provide impressive stopping power and a nicely firm pedal without any noticeable downside. The nose dives little under braking, and the Ferrari leans even less in the corners, although there’s plenty of suspension compliance over rough tarmac. Steering speed and effort are just right, turn-in is quick, and both grip and traction are outstanding. Just as important, despite its electronic differential and CST traction-and-stability-control system, the F430 feels entirely natural to drive.

“Every once in a while I think about selling it and getting a 458,” says Shone, “but then I think, Why? The F430 handles well, shifts well, makes all the right noises, and it’s still analog enough so you feel like you’re driving while being confident enough to really push. It’s all the car you need for a back road in the real world.” 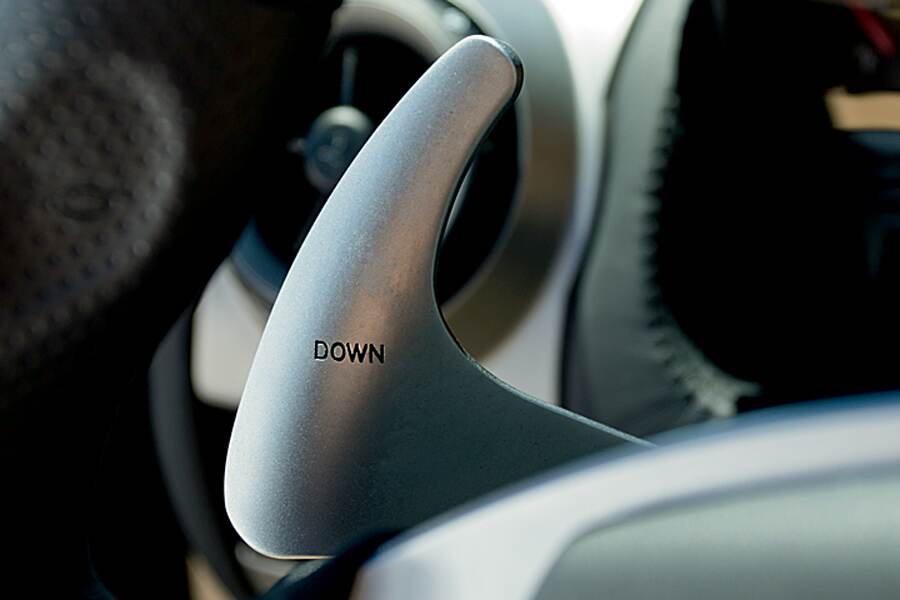 AT THE END OF THE DAY, I’m also impressed by how good the F430 still is. Yes, it’s been thoroughly outpaced by its successors, but even in a world of 670-hp 488s the 490-hp F430 remains a fast, fun sports car that’s easy to drive to its limits.

The story only gets better when you factor in ownership. The F430 has proven to be rugged, reliable, and, by exotic-car standards, affordable to maintain. “I had a service done and new tires put on when I got it, and that’s about it,” says Shone. “It’s basically got a Maserati bottom end, which was designed by the Ferrari F1 guys to be super-reliable, and it is; these things are bulletproof.”

The F355, for the most part, is none of those things, although Hall’s car hasn’t given him any reason for concern. “I’ve experienced no reliability issues,” he says. “I researched the known mechanical issues before I bought the car, and had the previous owner do a major service and fix most of the items as a condition of the purchase. I don’t consider the engine-out service a ‘reliability’ issue, it’s just part of the original design approach.”

In terms of driving experience, it’s important to remember the F355 is a 20-year-old car. It doesn’t offer modern-day horsepower, sophisticated driver’s aids, or chassis rigidity, yet it doesn’t feel old in a pejorative sense; it’s simply from a different era. Two decades later, it’s easy to see why the car was such a world-beater in its day.

Today, besides its timeless beauty, what really stands out is the F355’s fantastic five-valves-per-cylinder V8. While not as powerful or flexible as the F430’s mill, it overflows with character and charisma in a way the newer V8 simply can’t match. More than just the soul-stirring song, the F355’s engine imparts a sense of frantic delight as it races toward the 8,500-rpm redline.

In the end, it’s hard to see anyone seriously cross-shopping these Ferraris; the experience they offer is just too different. But on a summer day, with the sun shining and the tops down, there’s just something right about both of them. 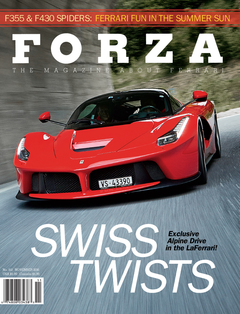